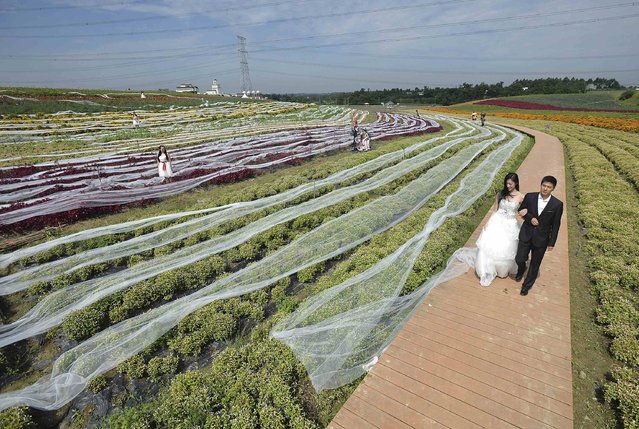 Staff members (R) dressed as newly-weds walk along a path as they display a 4100-meter-long wedding dress train trailed along shrubs, during a promotional event for a tourism valley in Chengdu, Sichuan province September 24, 2014. The long wedding dress train, which was 1.5-metre-wide, cost about 40,000 yuan (6,520 USD) and one month to make. The owner is planning to apply for the Guinness World Records, local media reported. (Photo by Reuters/Stringer) 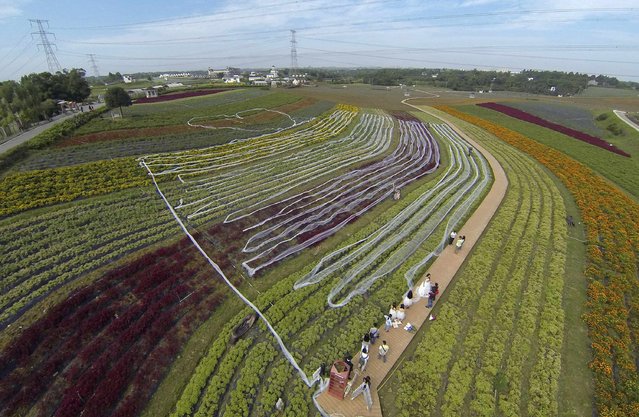 A view shows a 4100-meters-long wedding dress train trailed along shrubs and forming a heart shape (top), during a promotional event for a tourism valley in Chengdu, Sichuan province September 24, 2014. (Photo by Reuters/Stringer) 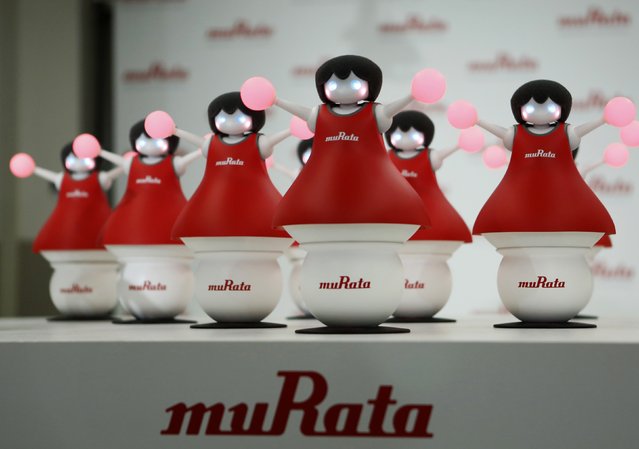 Japan's Murata Manufacturing Co. Ltd's latest concept robots, “The Murata Cheerleaders”, which balance on balls and synchronize as a team by utilizing its latest sensing and communication technology, are displayed during an unveiling event in Tokyo September 25, 2014. (Photo by Yuya Shino/Reuters) 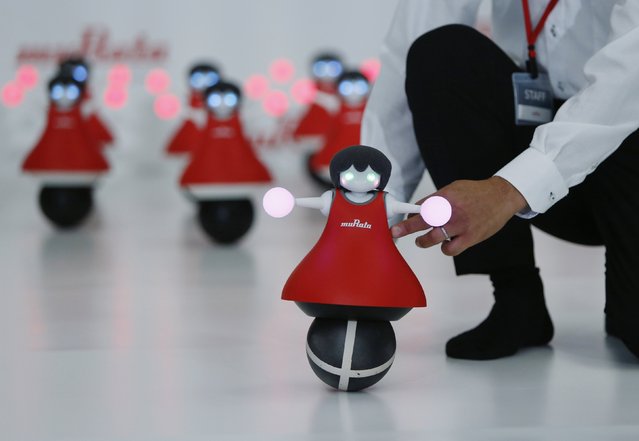 A staff of Japan's Murata Manufacturing Co. Ltd's pushes their latest concept robot, “The Murata Cheerleaders”, to demonstrate their balancing skills during an unveiling event in Tokyo September 25, 2014. “The Murata Cheerleaders”, balance on balls and synchronize as a team by utilizing Murata's latest sensing and communication technology. (Photo by Yuya Shino/Reuters) 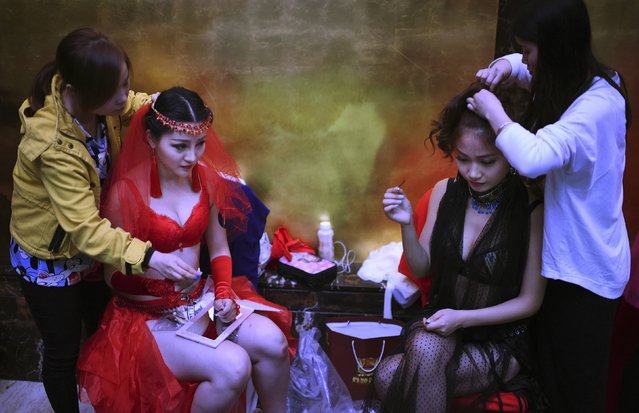 Participants adjust their make up backstage during a breast model contest in Hefei, Anhui province September 24, 2014. Over 100 models participated in this contest, which was held by a cosmetic company. The winner was awarded 680,000 yuan ($110,825) as cosmetic funds and 30,000 yuan ($4,890) in cash, local media reported. (Photo by Reuters/Stringer) 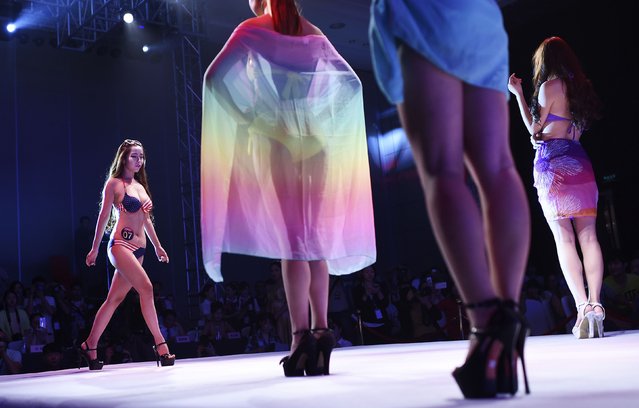 A participant (L) walks on stage during a breast model contest in Hefei, Anhui province September 24, 2014. (Photo by Reuters/Stringer) 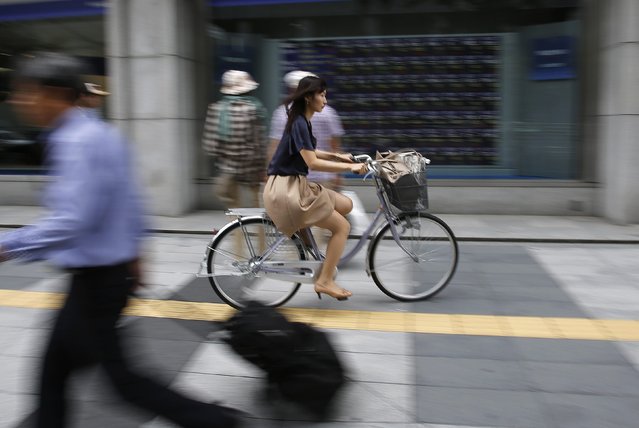 A woman cycles in front of a brokerage in Tokyo September 25, 2014. Japan's Nikkei share average rose to a fresh seven-year high on Thursday as strong U.S. economic data and continuing yen weakness buoyed investors' risk appetite, with buying extending beyond exporters to lift all sectors. (Photo by Toru Hanai/Reuters) 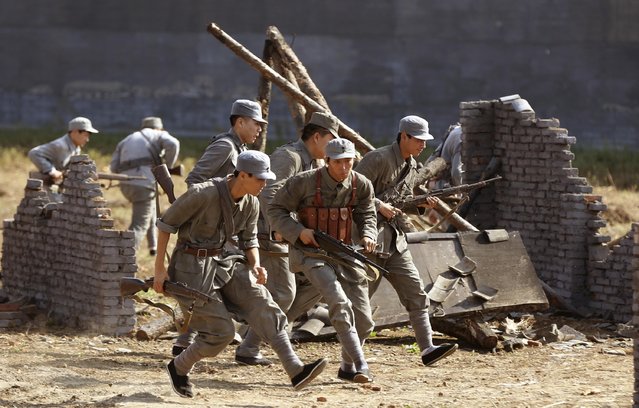 Performers and tourists dressed in military costumes hold toy guns during a performance of a battle scene between China and Japan, at a film city in Shenyang, Liaoning province September 24, 2014. The live performance, which involved 60 detonations, welcomed tourists at the site to participate, local media reported. (Photo by Reuters/Stringer) 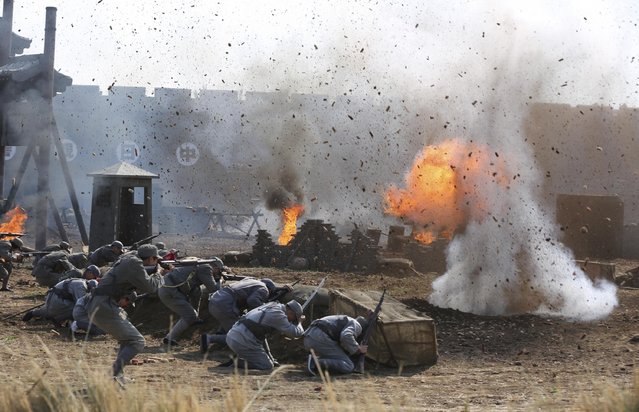 Performers and tourists dressed in military costumes hide behind a barrier near an explosion site, as a battle scene between China and Japan is performed at a film city in Shenyang, Liaoning province September 24, 2014. (Photo by Reuters/Stringer) 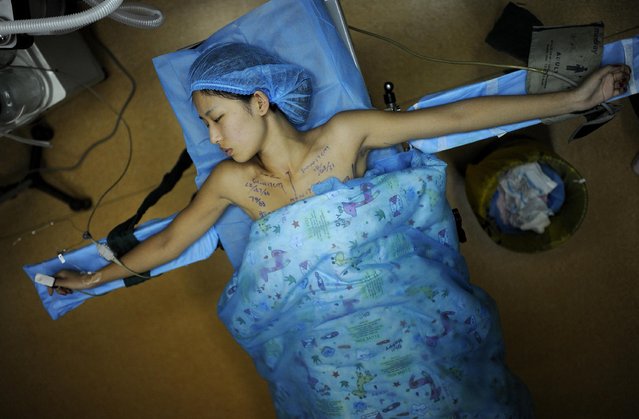 Feifei, 21, undergoes a breast implant surgery at a hospital in Hefei, Anhui province, September 1, 2014. Feifei, who is a third-year university student and a part-time model, received a free breast implant surgery which costs about 300,000 yuan ($48,881), in return for advertising for the hospital. Around 10 days after the operation, she won a prize at a local beauty contest, reported local media. (Photo by Reuters/Stringer) 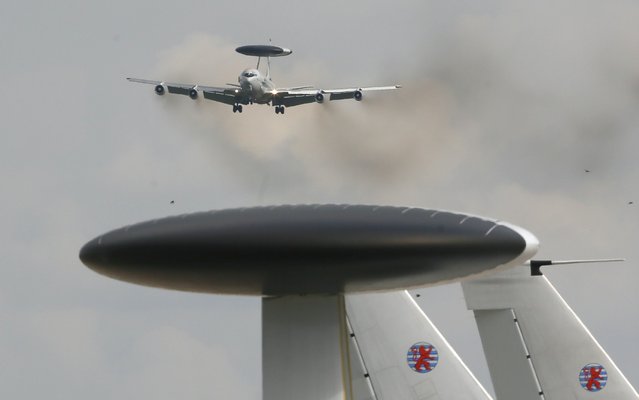 A NATO AWACS (Airborne Warning and Control Systems) aircraft approaches the AWACS air base in Geilenkirchen, near the German-Dutch border September 25, 2014, following its final mission over Afghanistan. The AWACS fleet concluded its NATO-led International Security Assistance Force (ISAF) mission on Thursday. NATO plans to end combat operations in Afghanistan at the end of this year and to leave a smaller training and advisory force in the country from next year to assist Afghan security forces in their fight against a resurgent Taliban insurgency. (Photo by Wolfgang Rattay/Reuters) 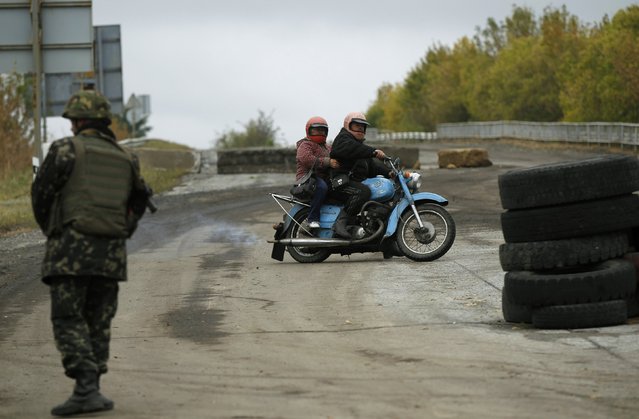 Local residents drive at the checkpoint near the eastern Ukrainian town of Debaltseve, September 25, 2014. (Photo by David Mdzinarishvili/Reuters) 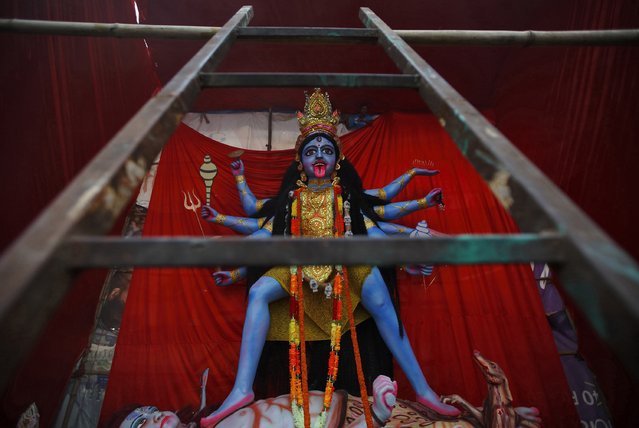 A man arranges a backdrop behind the giant idol of Goddess Kali during the “Dashain”, Hinduism's biggest religious festival, in Kathmandu September 25, 2014. Hindus in Nepal celebrate victory over evil during the festival by flying kites, feasting, playing swings, sacrificing animals and worshipping the Goddess Durga as well as other gods and goddesses, as part of celebrations held throughout the country. (Photo by Navesh Chitrakar/Reuters) 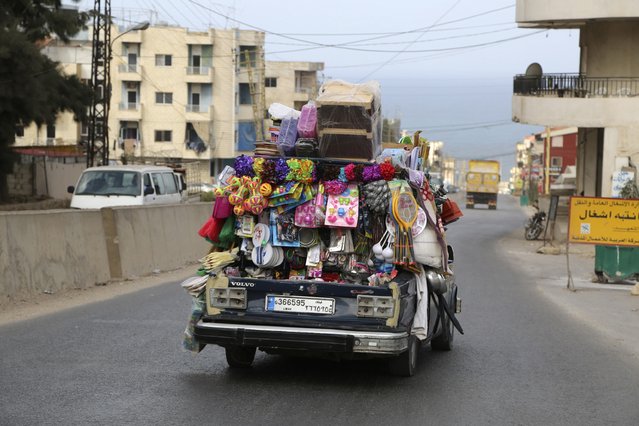 A vendor drives in a vehicle with various items on sale in Beirut September 25, 2014. (Photo by Sharif Karim/Reuters) 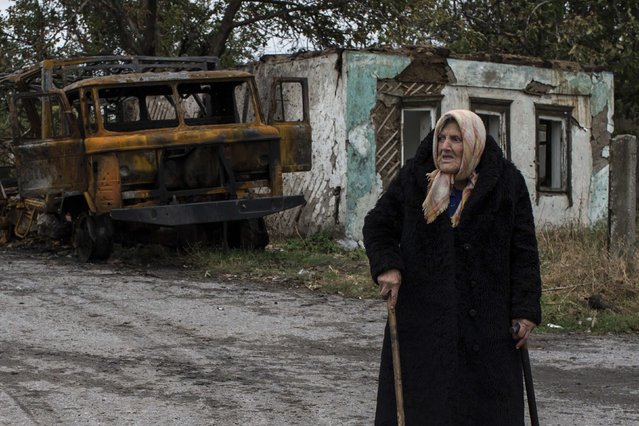 A woman walks along a road past a burnt-out vehicle in the town of Ilovaysk, eastern Ukraine, September 25, 2014. (Photo by Marko Djurica/Reuters) 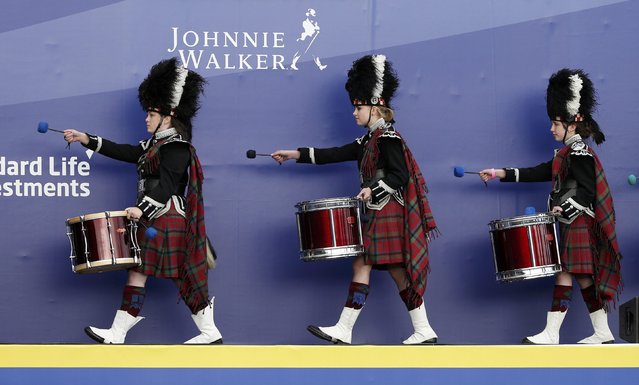 Members of the Vale of Atholl pipe band march off the stage during the opening ceremony of the 40th Ryder Cup at Gleneagles in Scotland September 25, 2014. (Photo by Russell Cheyne/Reuters) 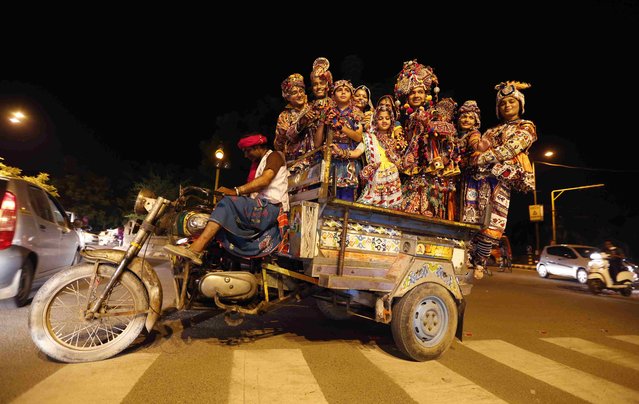 Dancers wearing traditional attires pose as they stand in a cart driven by a motorcycle on their way to perform Dandiya, a traditional dance, on the first day of the nine-day long Navratri festival in the western Indian city of Ahmedabad September 25, 2014. Navratri, held in honour of Hindu Goddess Durga, is celebrated over a period of nine days where thousands of youths dance the night away in traditional costumes. (Photo by Amit Dave/Reuters) 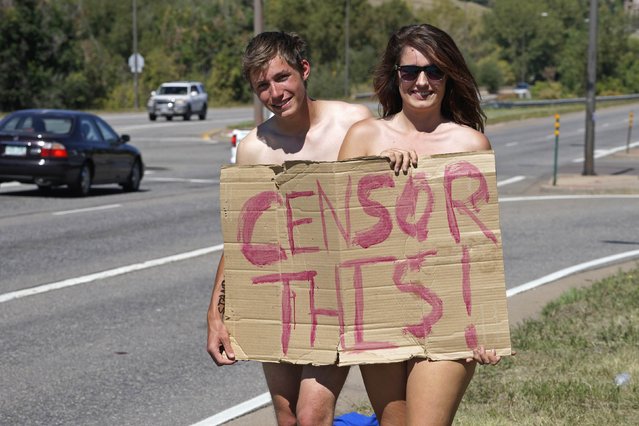 Protestors at Bear Creek High School hold a sign while standing on a street near the school in Lakewood, Colorado September 25, 2014. High school students in Colorado's second-largest school district staged a walkout again on Thursday to demonstrate against proposed changes to a history curriculum that would stress patriotism and discourage civil disobedience. (Photo by Rick Wilking/Reuters) 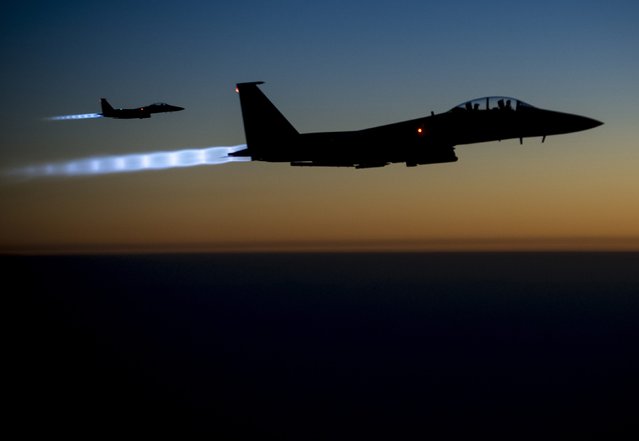 A pair of U.S. Air Force F-15E Strike Eagles fly over northern Iraq after conducting airstrikes in Syria, in this U.S. Air Force handout photo taken early in the morning of September 23, 2014. These aircraft were part of a large coalition strike package that was the first to strike ISIL targets in Syria. At least 14 Islamic State fighters were killed in air strikes by U.S.-led forces overnight in northeast Syria, a group monitoring the war said on September 25, 2014, and the Syrian air force bombed rebel areas in the west of the country. (Photo by Senior Airman Matthew Bruch/Reuters/U.S. Air Force) 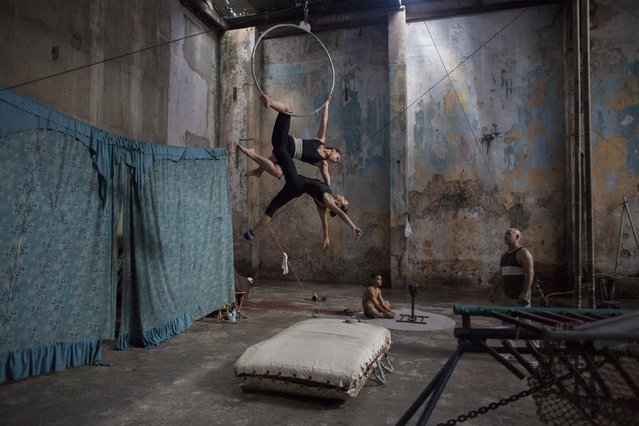 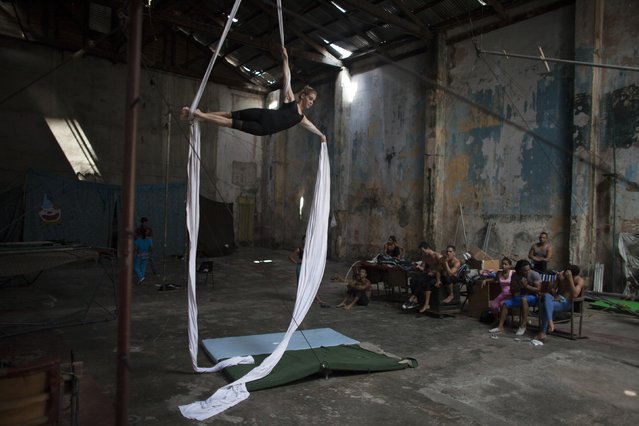 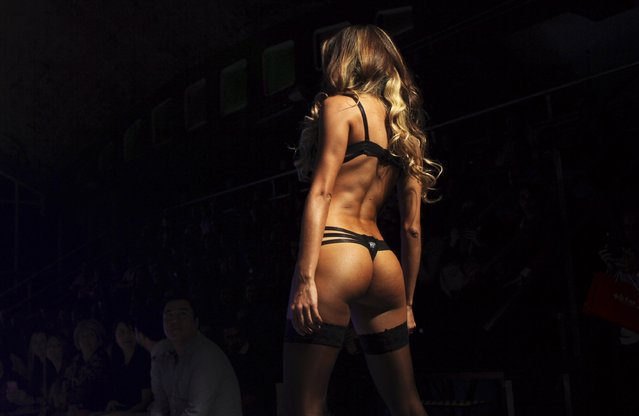 A model presents a creation of “ST. EVEN” during a fashion show in Medellin September 25, 2014. (Photo by Fredy Builes/Reuters) 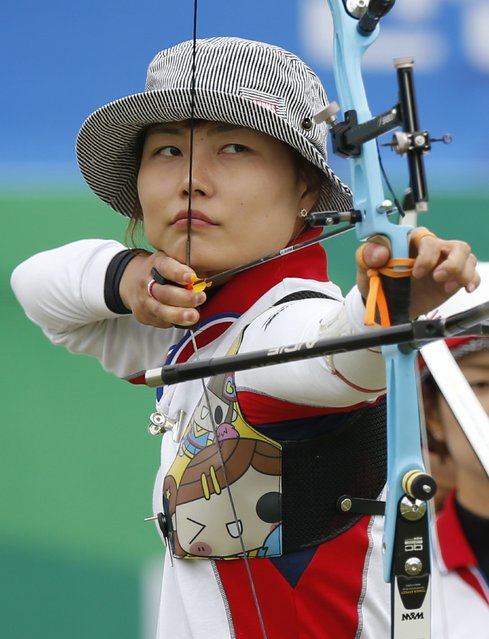 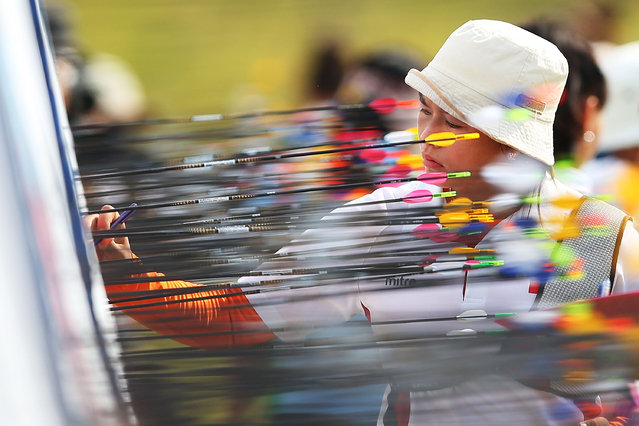 Athletes pull out arrows from their targets in Women's 70m Recurve Qualification Round during day four of the 2014 Asian Games at Gyeyang Asiad Archery Field on September 23, 2014 in Incheon, South Korea. (Photo by Brendon Thorne/Getty Images) 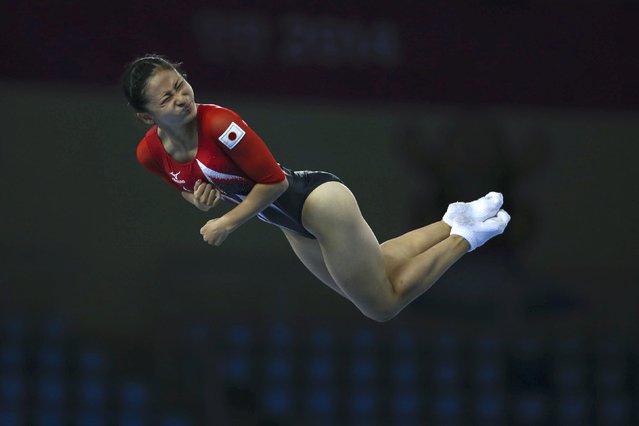 Japan's Ayano Kishi competes in the final of the women's trampoline event during the gymnastics competition at the Namdong Gymnasium Club during the 17th Asian Games in Incheon September 26, 2014. (Photo by Kim Hong-Ji/Reuters) 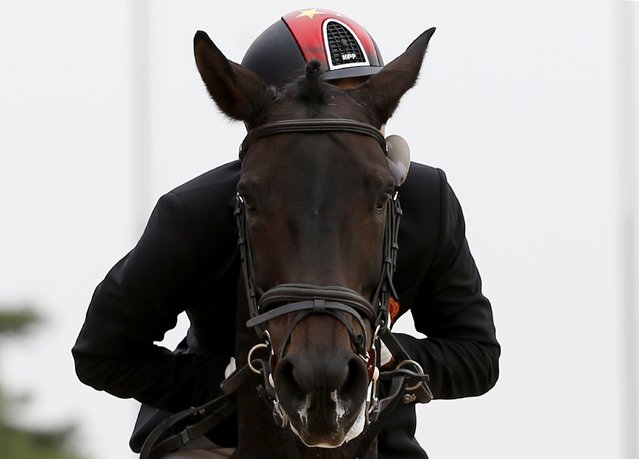 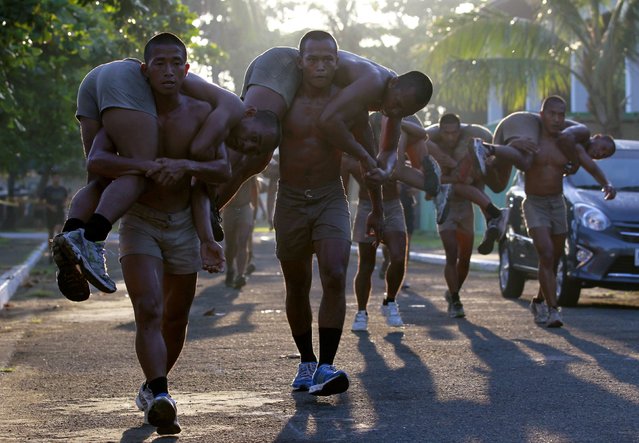 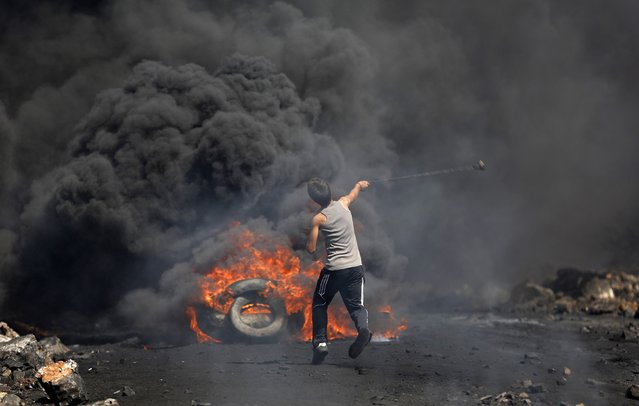 A Palestinian protester uses slings to hurl a stone toward Israeli soldiers as he stands next to burning tyres during clashes following a protest against the near-by Jewish settlement of Qadomem, in the West Bank village of Kofr Qadom near Nablus September 26, 2014. (Photo by Mohamad Torokman/Reuters)
Edit Del
27 Sep 2014 11:54:00, post received 0 comments
Publication archive:
←   →
Popular tags:
All tags
Last searches: