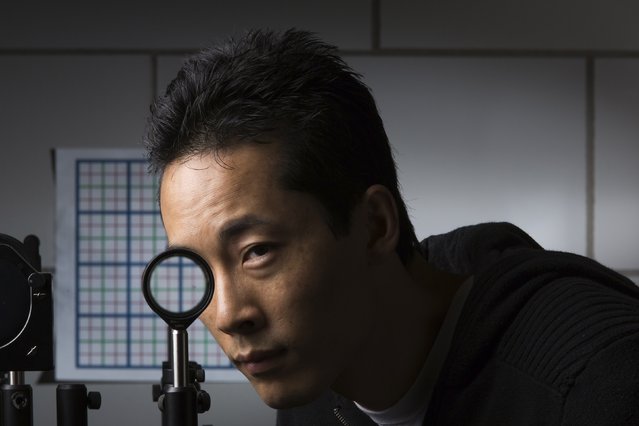 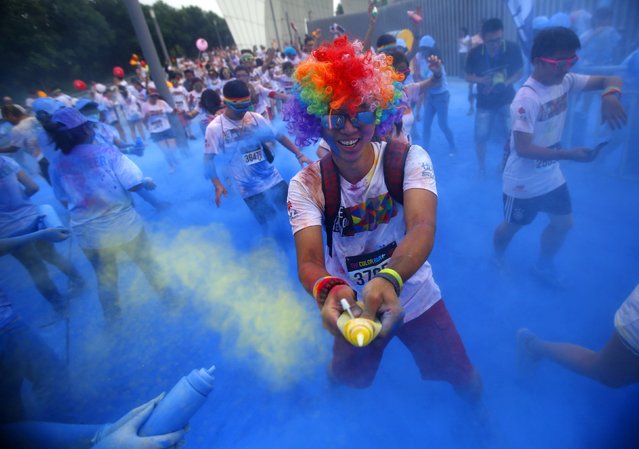 A competitor has coloured powder sprayed at him during the Color Run in Shanghai September 27, 2014. Inspired by the Hindu Holi festival, participants take part in a five-km (3.11-mile) run dotted with locations where coloured powders are thrown over them. (Photo by Carlos Barria/Reuters) 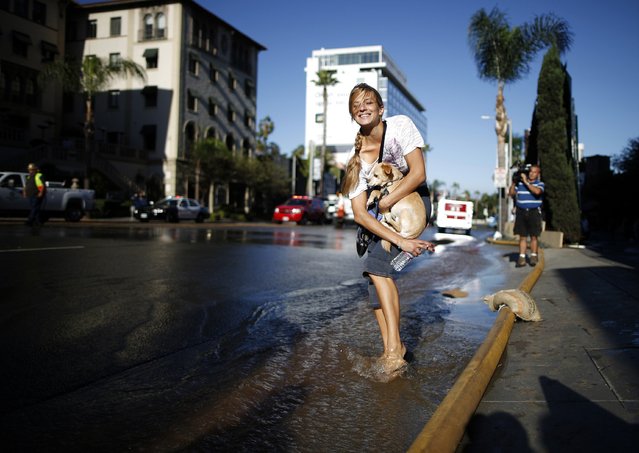 Dina Nadezhdina, 29, carries her dog over a flooded gutter near a major water main break on Sunset Boulevard in West Hollywood, Los Angeles, California September 26, 2014. A large water pipe burst under the Los Angeles suburb of West Hollywood on Friday, flooding the famed Sunset Strip and forcing authorities to shut down the thoroughfare to vehicle traffic during the evening rush hour. (Photo by Lucy Nicholson/Reuters) 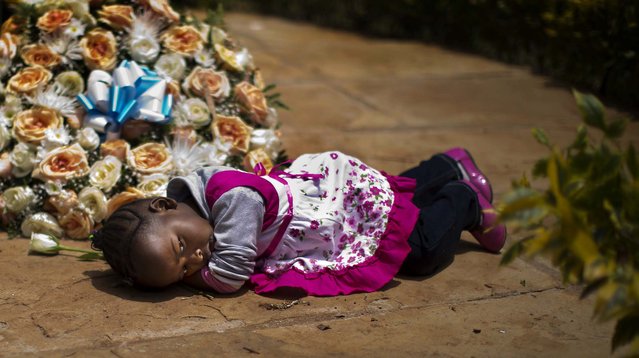 Nicole Tashly, 2, lies quietly on the ground holding the white rose her mother Esther Muthoni, left, instructed her to lay at the memorial monument while they remember her father Paul Muriithi Muriuki who died in the Westgate Mall attack, as they and other families of the victims lay flowers and remember, at the Amani Garden memorial site in the Karura Forest in Nairobi, Kenya Sunday, September 21, 2014. Kenya is marking one year since four gunmen stormed the upscale Westgate Mall in Nairobi, killing 67 people, and a memorial plaque with the names of the victims was unveiled at the popular forest on the edge of the city. (Photo by Ben Curtis/AP Photo) 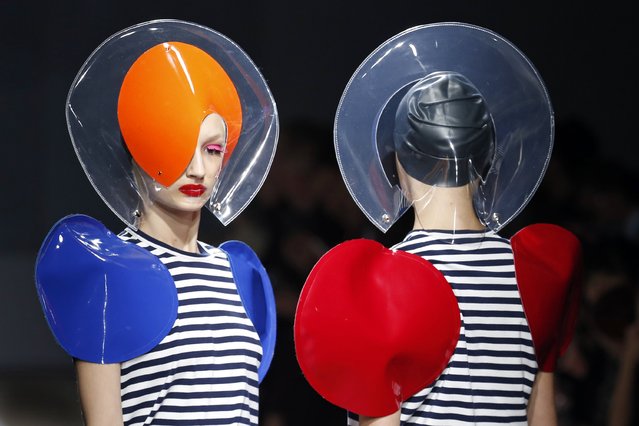 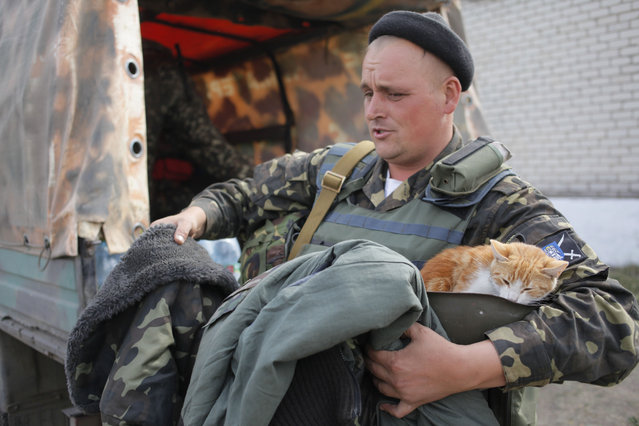 A Ukrainian soldier holds a cat as he receives warm clothes close to Luhansk in the eastern Ukraine Tuesday, September 23, 2014. Despite of the declared cease-fire between the separatists and the Ukrainian military in eastern Ukraine occasional shooting has been reported. (Photo by Petro Zadorozhnyy/AP Photo) 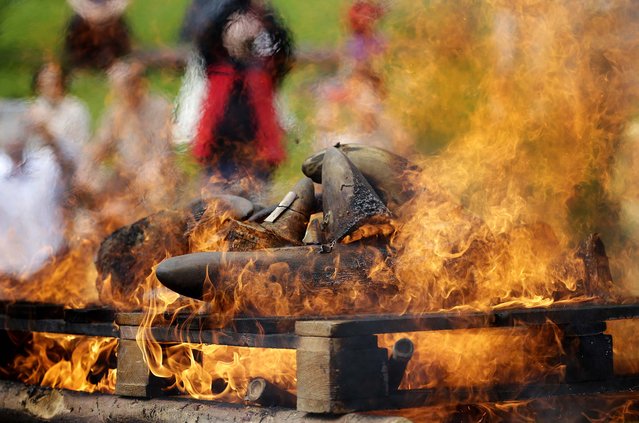 About 50 kilograms of rhino horns are being burned at the zoo in Dvur Kralove, Czech Republic, Sunday, September 21, 2014. During the symbolic event the zoo burned the horns to show clearly that the situation of rhinos in the wild is critical and that it is the demand for rhino horn what drives them towards extinction. (Photo by Petr David Josek/AP Photo) 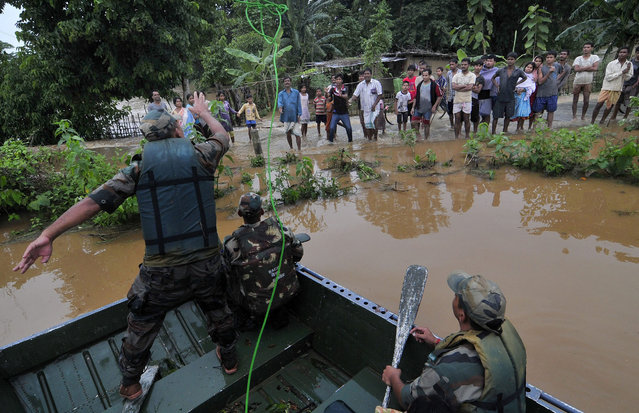 Indian Army personnel conducting rescue operation in the flood affected Chaygaon village in Kamrup district of Assam state, India, 23 September 2014. At least 22 people have been killed in floods and landslides in north-eastern India, officials said and an estimated 200,000 people were affected as the floods that damaged roads, bridges and homes in states of Meghalaya and Assam. (Photo by EPA/Stringer) 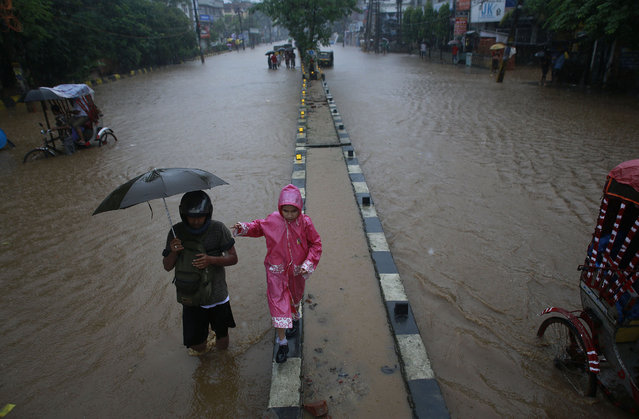 A boy makes his way through a flooded area as he returns from school during heavy monsoon rains in Gauhati, Assam state, India, Monday, September 22, 2014. Officials say relentless rains in parts of northeastern India have triggered landslides and flash floods, killing at least seven people. (Photo by Anupam Nath/AP Photo) 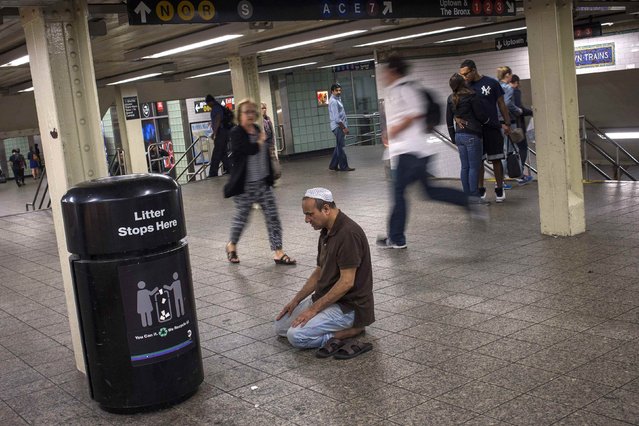 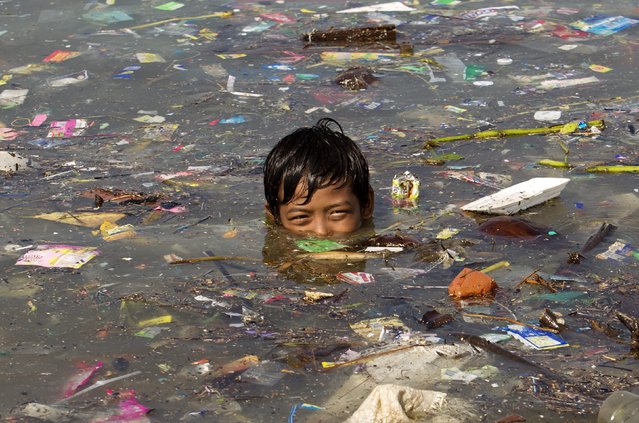 A Filipino boy swims among washed up rubbish in Manila bay, the Philippines, 23 September 2014. Countries and organizations began to announce measures to reduce greenhouse gas emissions and divest in fossil fuels on the one-day UN Climate Summit, where more pledges to reduce climate change are expected. Addressing the controversial issue of taxing or trading in carbon emissions, the World Bank on 22 September 2014, identified at least 73 countries that advocate putting a price on the release of carbon dioxide into the atmosphere. They represent a combined 54 per cent of global greenhouse gas emissions blamed for global warming, and include major emitters China, Russia and members of the European Union, emerging markets Indonesia, Mexico and South Africa, and vulnerable island countries including the Philippines, Kiribati and Nauru. (Photo by Ritchie B. Tongo/EPA) 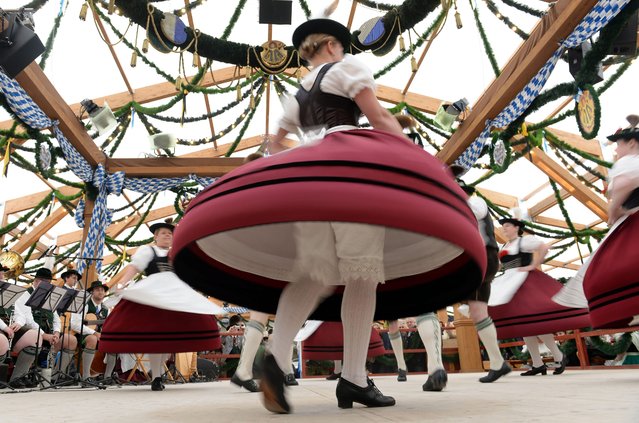 Women wearing traditional Bavarian attire dance on the stage of the funfair tent “Festzelt Tradition” at the 181st Oktoberfest in Munich, Germany, 22 September 2014. The annual beer festival runs from 20 September to 05 October. (Photo by Andreas Gebert/EPA) 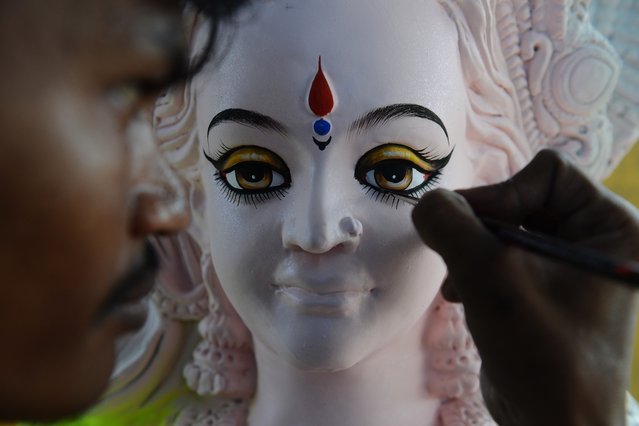 An Indian artist gives final touches to a statue of the Hindu goddess Durga ahead of the forthcoming Dushhera-Vijaya Dashami festival at a workshop in Hyderabad on September 22, 2014. Durga Puja, the annual Hindu festival that involves worship of the goddess Durga who symbolizes power and the triumph of good over evil in hindu mythology, culminates in the immersion of idols in water bodies. (Photo by Noah Seelam/AFP Photo) 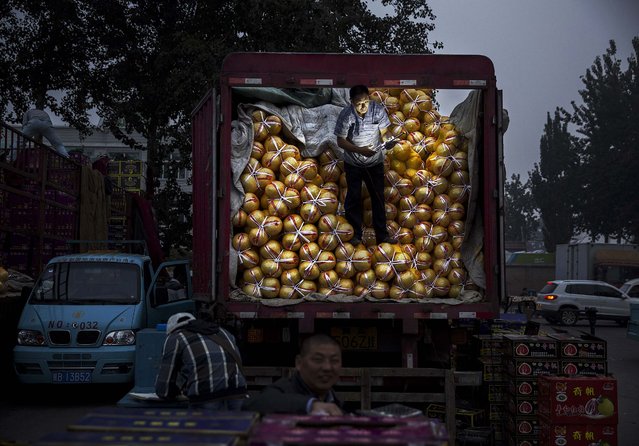 A Chinese fruit vendor fixes a light as he stands on a truck at a local market on September 26, 2014 in Beijing, China. China is challenged to ensure its food supply keeps pace with its population as more farmers leave the agricultural work force for jobs in the cities. Diets and lifestyles have also been altered by the rising affluence of China's growing middle class and its increasing demand for meat. (Photo by Kevin Frayer/Getty Images) 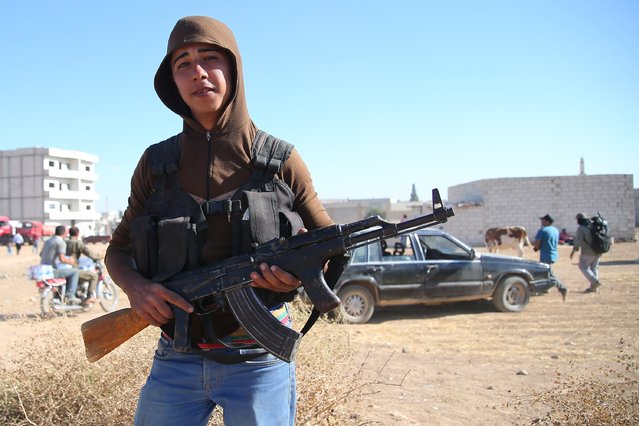 A Protection of the Kurdish People (YPG) fighter holds her AK-47 in the Turkish-Syrian border after refugees and Turkish protestors pull down a part of the Turkish-Syrian border fence, near the southeastern town of Suruc in Sanliurfa province September 26, 2014. Nearly 140,000 Syrian Kurds have fled into Turkey since last week, the fastest exodus of the entire three-year civil war. The United Nations refugee agency said on Tuesday it was making contingency plans in case all 400,000 inhabitants of the Syrian Kurdish town of Kobani fled into Turkey to escape advancing Islamic State militants. (Photo by Stringer/Getty Images) 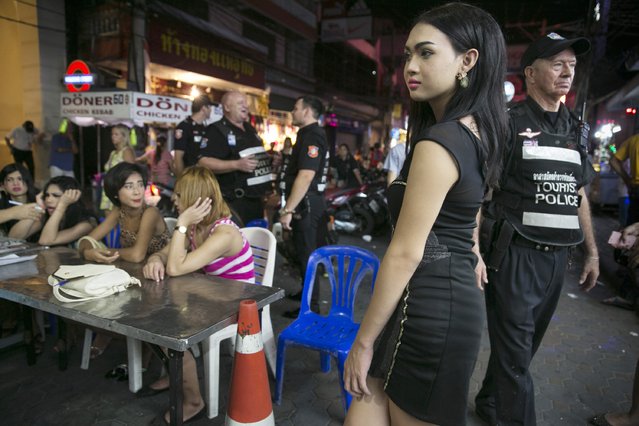 Thai ladyboys are detained while waiting to be taken to the police station September 21, 2014 in Pattaya, Thailand. Pattaya is tackling s*x tourism and crime as the city attempts to clean up it's image doing nightly sweeps in the popular red-light district called the Walking Street. Ladyboy s*x workers are being targeted by police who are assisted by members of the Foreign Tourist Police Assistants (FTPA). They are fined 300 Thai bhat ( almost $10 US). (Photo by Paula Bronstein/Getty Images) 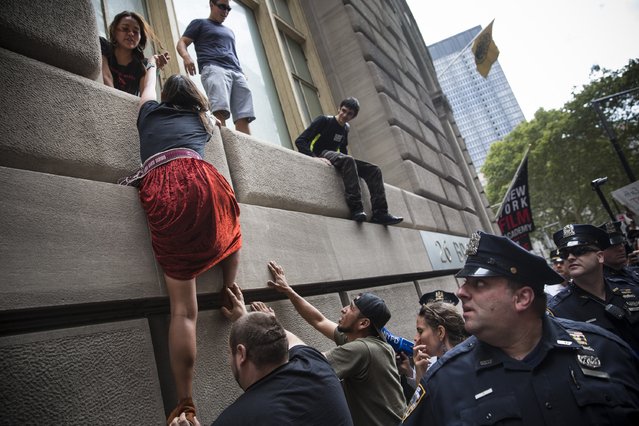 Protesters calling for massive economic and political changes to curb the effects of global warming climb down from a building's ledge after leading chants on Broadway around the Wall Street Bull statue on September 22, 2014 in New York City. Approximately 2,600 protesters participated; despite blocking traffic on numerous streets few arrests have taken place. (Photo by Andrew Burton/Getty Images) 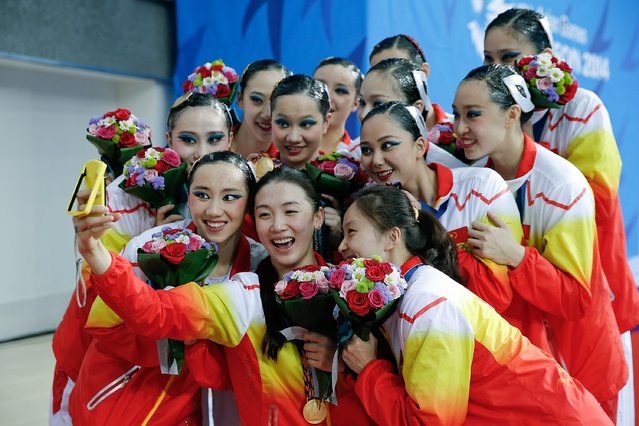 Gold medalist team of China pose for a selfie picture with their medals during the victory ceremony after the team synchronised swimming Free Combination - Final during the day four of 2014 Asian Games at Munhak Park Tae-hwan Aquatics Center on September 23, 2014 in Incheon, South Korea. (Photo by Lintao Zhang/Getty Images) 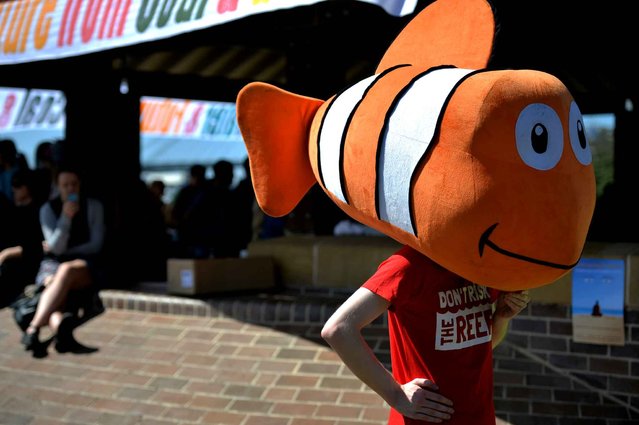 An enviromental protester attends a meeting in a park in Sydney September 21, 2014 as part of a global protest on climate change. Australians rallied for climate action forming a human chain message as part of an international day of action to fight climate change ahead of a United Nations summit in New York on 23 September. (Photo by Peter Parks/AFP Photo) 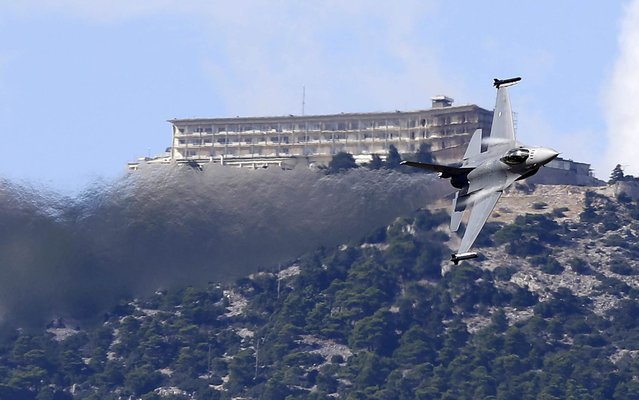 A Dutch F16 fighter jet takes part in an aerobatic display as the pilot flies in front of Casino Mont Parnes atop of the mountain Parnitha during an airshow in northern Athens on Friday, September 26, 2014. The displays launched an annual airshow, known as Athens Flying Week, that will involve planes from several European countries at the weekend at Tatoi airfield. (Photo by Thanassis Stavrakis/AP Photo) 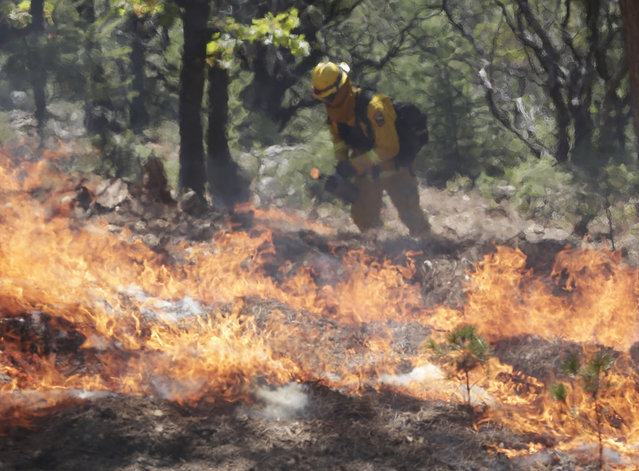 A firefighters sets a controlled burn with a drip torch while fighting the King Fire on Tuesday, September 23, 2014, in Mosquito, Calif. Strike teams from Fresno and El Dorado Cal Fire worked in conjunction with department of corrections crews in an offensive firing tactic, intended to take away fuel from the main fire. Nearly 2,000 firefighters were added Tuesday to battle the wildfire threatening thousands of homes, in anticipation of erratic winds and hotter temperatures that could undo their progress. (Photo by Marcio Jose Sanchez/AP Photo) 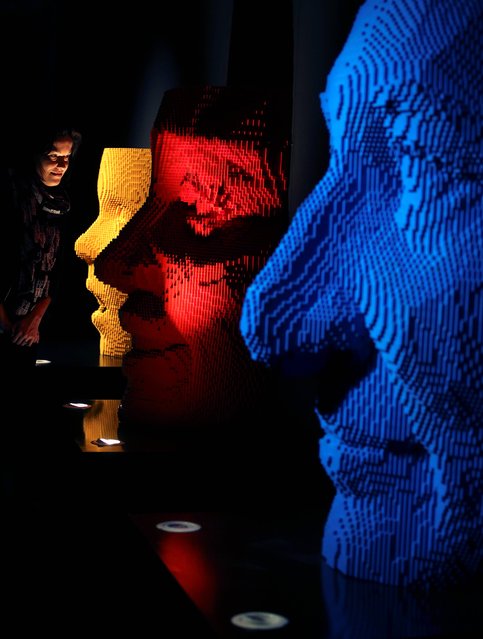 Cherie Knight poses for a photograph looking at the Sculpture “Skulls” by Nathan Sawaya at the Old Truman Brewery, East London, September 24, 2014. Sawaya's exhibition, which uses LEGO bricks as his medium will run from September 26 until January 4, 2015. (Photo by Philip Toscano/PA Wire) 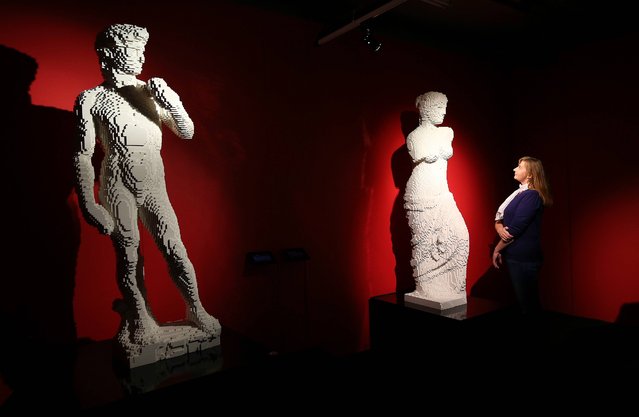 A visitor looks at one of the exhibits at The Art of the Brick, an exhibition of LEGO sculptures made by artist Nathan Sawaya, at the Old Truman Brewery in London, on September 24, 2014. (Photo by Philip Toscano/PA Wire) 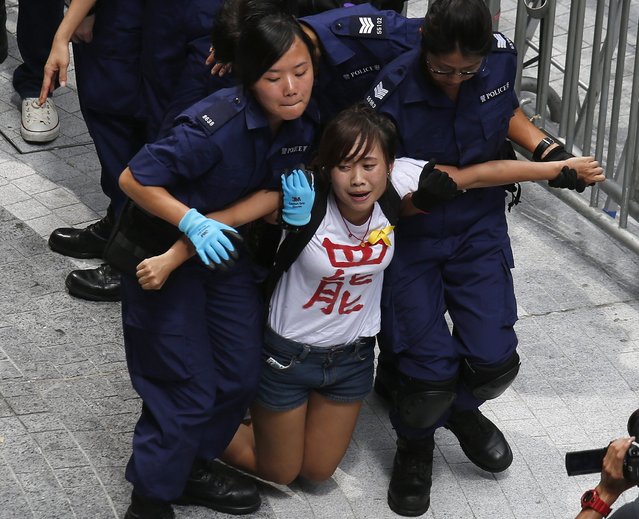 A protester reacts as she is dragged away by police after storming in government headquarters in Hong Kong September 27, 2014. Hong Kong riot police used pepper spray to disperse protesters around government headquarters on Saturday, fuelling tension ahead of a planned sit-in by pro-democracy activists to protest against Beijing's tightening grip on the city. The word on the T-shirt reads, “Boycott”. (Photo by Bobby Yip/Reuters) 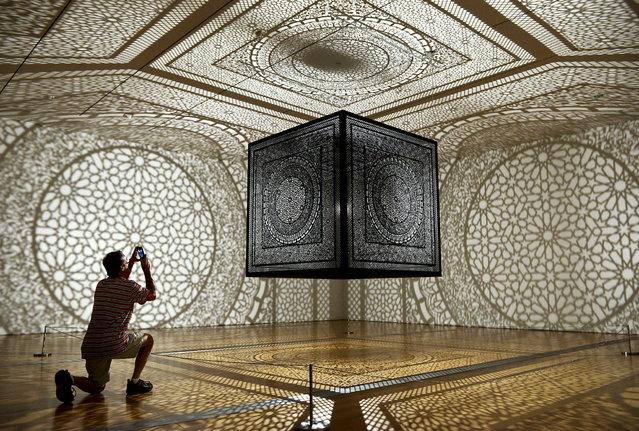 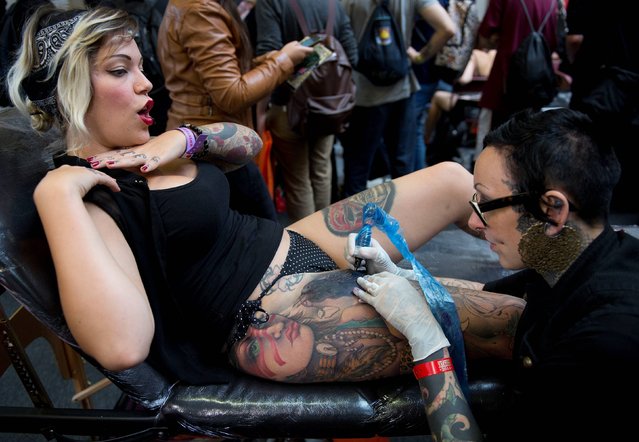 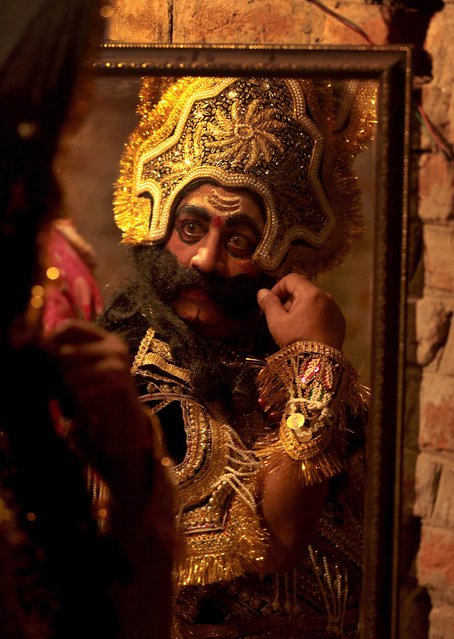 An Indian actor dressed as the Hindu demon king Ravana is reflected in a mirror as he prepares backstage for a performance of the Ramlila, a dramatisation of Hindu God Rama's life, in Jammu on September 25, 2013. Ramlila is a dramatic folk re-enactment of the life of Lord Rama's victory after a ten day battle with the ten headed Demon King Ravana, as described in the Hindu religious epic, the Ramayana. (Photo by AFP Photo) 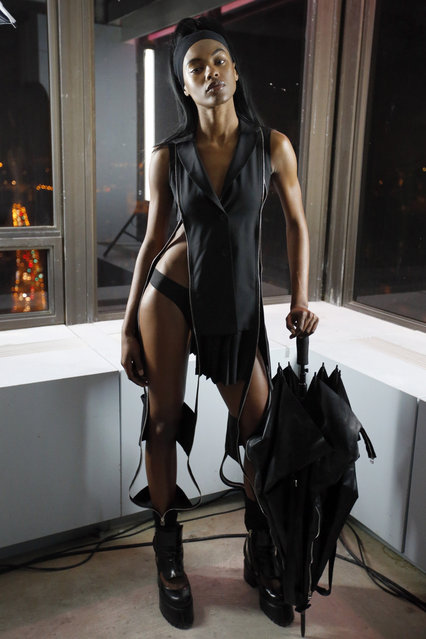