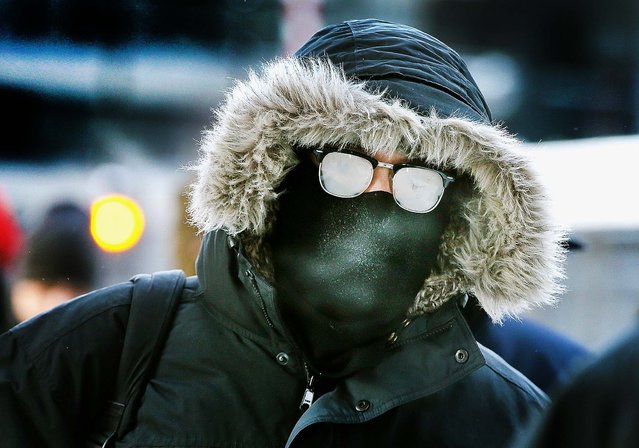 Commuters make a sub-zero trek, causing glasses to fog up, to offices in the Loop in Chicago. Temperatures in the city dipped to -16 degree Fahrenheit Monday morning on the heals of a polar vortex that has swept into the Midwest bringing with it dangerously cold temperatures not seen in the area in about 20 years. (Photo by Scott Olson/Getty Images) A woman falls while slipping on ice during freezing rain on Roosevelt Island, a borough of Manhattan, in New York January 5, 2014. New York City was hit on Friday by the first severe winter storm of 2014 and was still in the grip of sub-freezing weather on Sunday morning. The woman got up and walked away from the fall. (Photo by Zoran Milich/Reuters) 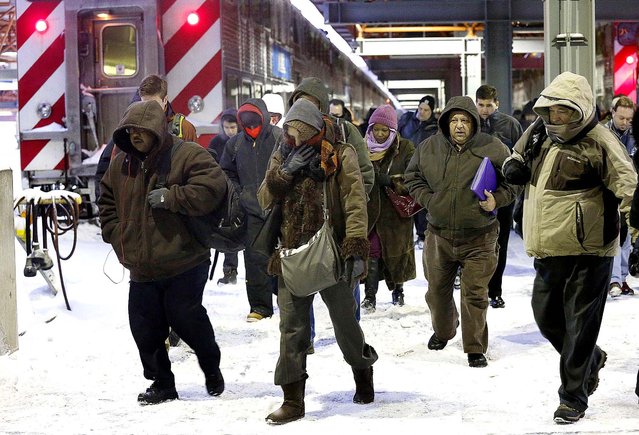 Commuters arrive at the La Salle Street commuter rail station as they experience temperatures well below zero and wind chills expected to reach 40 to 50 below in Chicago. (Photo by Charles Rex Arbogast/Associated Press) 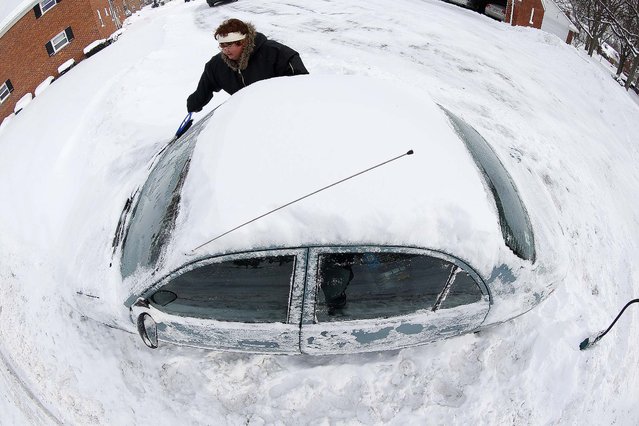 Marguerite Johnston uncovers her car in Grosse Pointe on Monday. Michigan residents are preparing for diving temperatures as they dig out from as much as 15 inches of snow. (Photo by Paul Sancya/Associated Press) 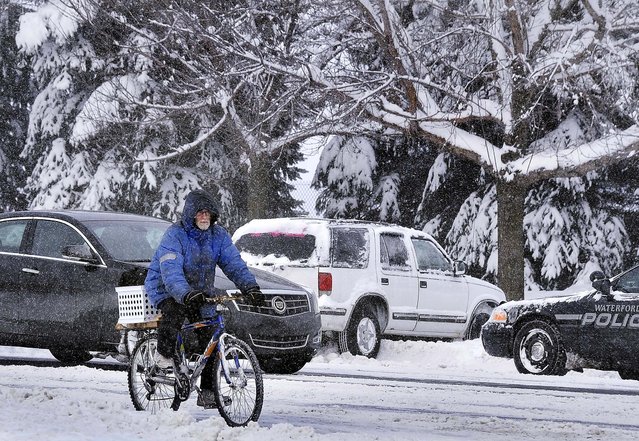 Tony Berard makes his way down Highland Road in Waterford, past a car that had slid off the road, on his way back from work in White Lake, Michigan. (Photo by Daniel Mears/Detroit News) 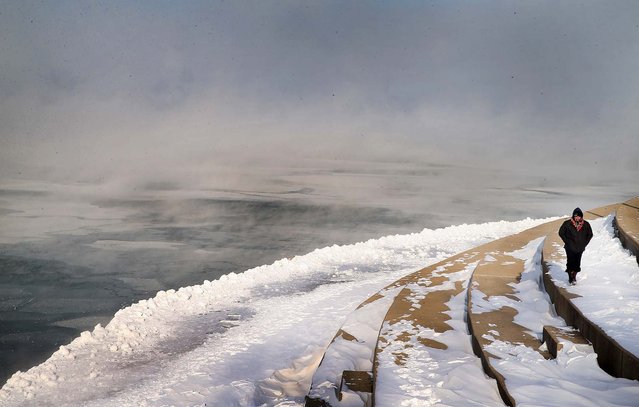 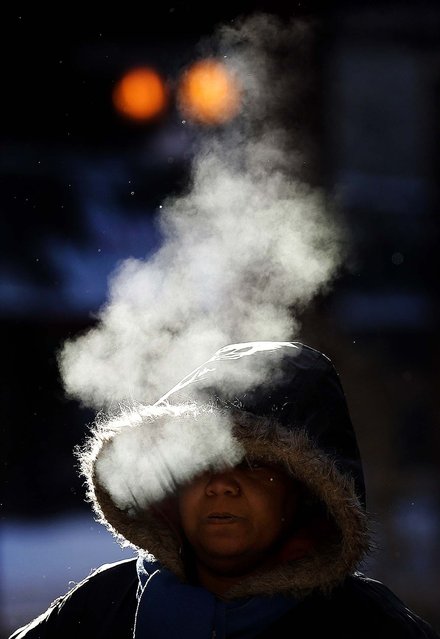 A woman walks in frigid cold temperatures though downtown Chicago on Monday. (Photo by Jim Young/Reuters) 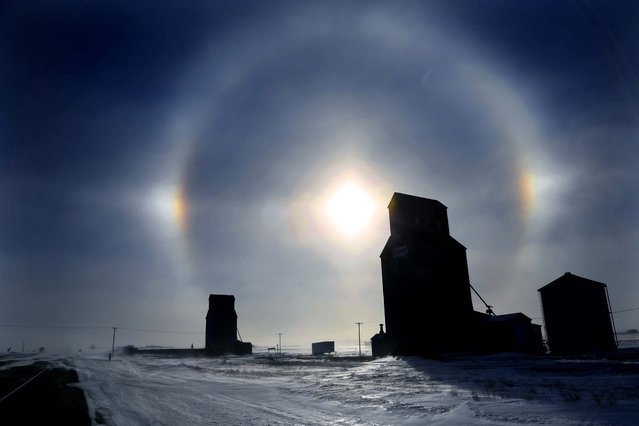 With temperatures at about 22 below zero with a -50 wind chill, it was hard to find the beauty in the brutal weather in Bismarck, N.D. But sundogs, a ring of light visible around the sun or moon when light is refracted through ice crystals in the atmosphere, are nevertheless quite beautiful along Highway 83 north of Bismark. (Photo by Brian Peterson/The Star Tribune) 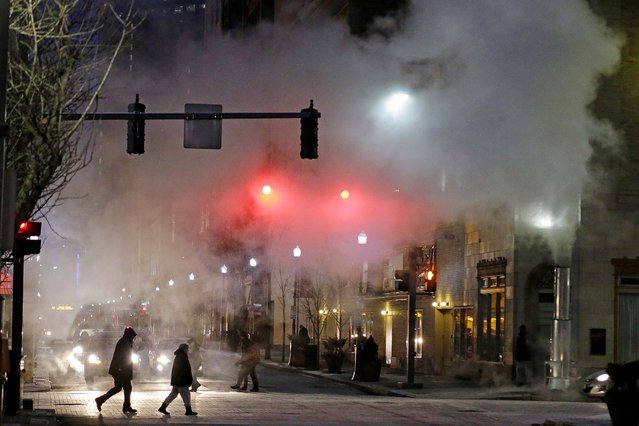 With temperatures nearing zero, a cloud of steam from a manhole blows across an intersection in downtown Pittsburgh during Monday's evening rush hour. The National Weather service is calling for a temperature of -11 degrees overnight, with a high of 2 degrees on Tuesday. (Photo by Gene J. Puskar/Associated Press) 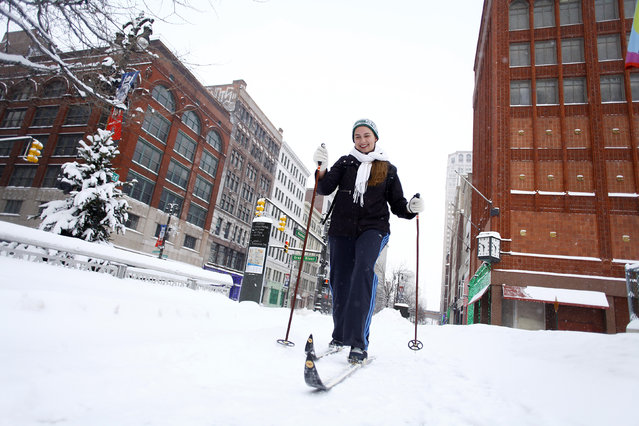 Alison Mueller skies to work through several inches of snow along Woodward Avenue as the area deals with record breaking freezing weather January 6, 2014 in Detroit, Michigan. Michigan and most of the Midwest received their first major snow storm of 2014 last week and subzero temperatures are expected most of this week with wind-chill driving temperatures down to 50-70 degrees below zero. A “polar vortex” weather pattern is bringing some of the coldest weather the U.S. has had in almost 20 years. (Photo by Joshua Lott/Getty Images) 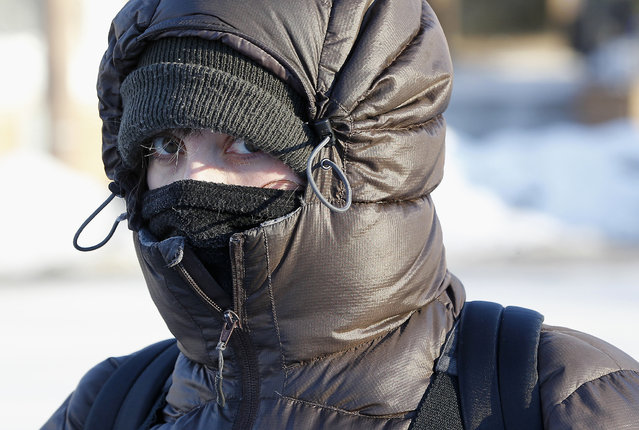 Lizzie Hoeppner is bundled for the cold as she walks home downtown as temperatures peaked in the minus teens, with wind chills in the thirty to forty below range on Monday. Hoeppner and her husband just moved to Milwaukee from England over Christmas, and said she's never experienced temperatures like this before. January 6, 2013. (Photo by Gary Porter/Milwaukee Journal Sentinel) 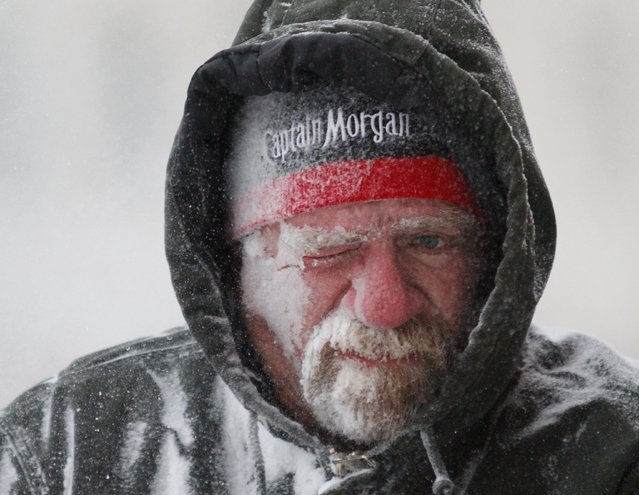 Allan Umscheid, owner of Yards By Al in Lawrence, Kan, feels the bitter wind and catches drifting snow on his face as he runs a snow blower early Sunday morning, January 5, 2014. Several inches of snow fell on the Lawrence area overnight and wind chill values are forecast to be as low as minus 25 to minus 32 Sunday night through Monday morning. (Photo by Mike Yoder/AP Photo/The Journal-World) 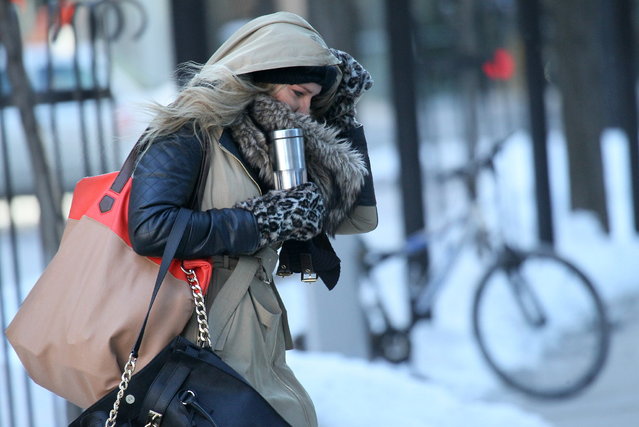 January 6, 2014. Photographs of the cold in and around Milwaukee. Here people make their way as best they can around the downtown area between office buildings and heading to work. (Photo by Michael Sears/Milwaukee Journal Sentinel) 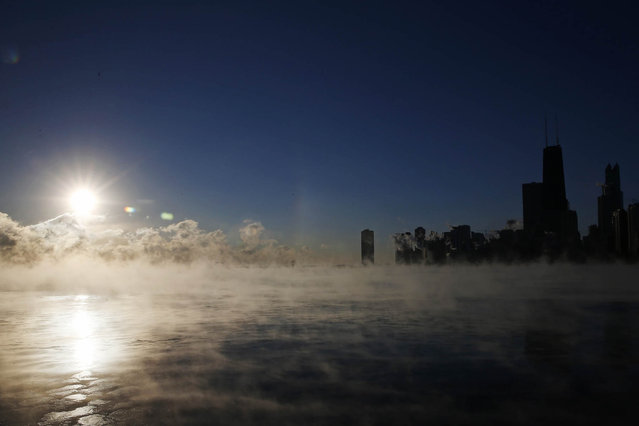 The Chicago skyline is seen as the arctic sea smoke rises off Lake Michigan in Chicago, Illinois, January 6, 2014. A blast of Arctic air gripped the mid-section of the United States on Monday, bringing the coldest temperatures in two decades. Meteorologists said temperatures were dangerously cold and life-threatening in some places, with 0 degrees Fahrenheit (minus 18 Celsius) recorded in Chicago, St. Louis and Indianapolis. The chill was set to bear down on eastern and southern states as the day wore on. (Photo by Jim Young/Reuters) January 6, 2014. Photographs of the cold in and around Milwaukee. Here a snowman family seemed to be one of the few to stand their ground against the cold along Milwaukee's lakefront. (Photo by Michael Sears/Milwaukee Journal Sentinel) 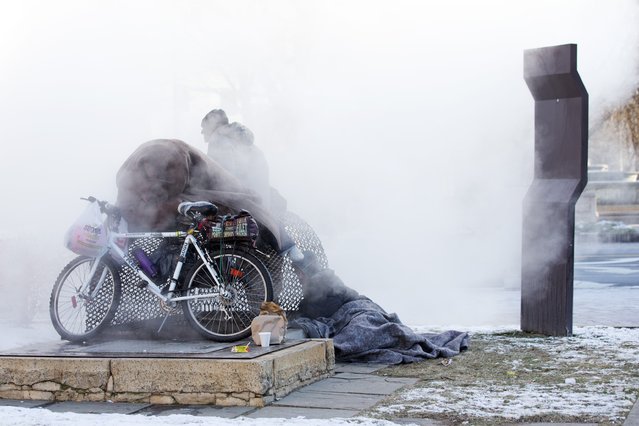 Steam swirls in frigid air as Nick, bottom right, and three homeless men who declined to give their names, keep warm by a steam grate by the Federal Trade Commission, just blocks from the Capitol, during below freezing temperatures in Washington, Saturday, January 4, 2014. (Photo by Jacquelyn Martin/AP Photo) 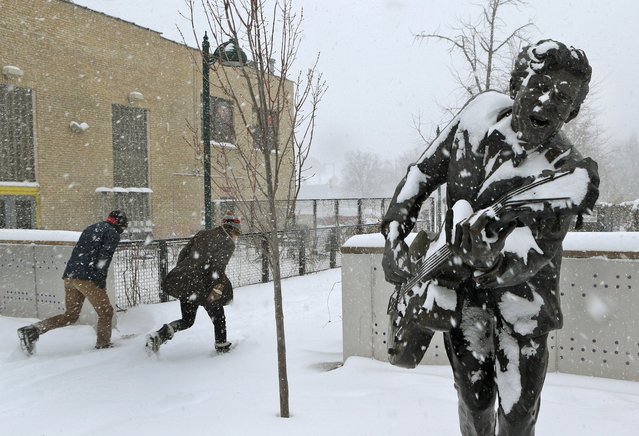 Two people duck into the blowing snow as they leave the U City Loop next to the statue of Chuck Berry on Sunday morning, January 5, 201, in St. Louis. Heavy snow combined with strong winds and bitter cold created a dangerous winter mix Sunday over much of Missouri. (Photo by J. B. Forbes/AP Photo/St. Louis Post-Dispatch) 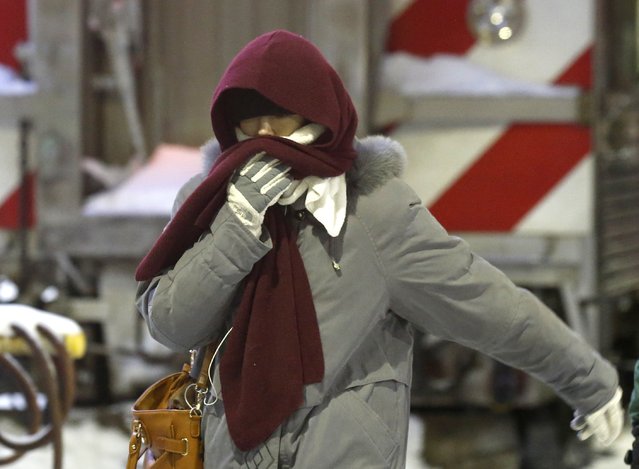 A woman walks briskly as she arrives at the La Salle Street commuter rail station with temperatures well below zero and wind chills expected to reach 40 to 50 below, Monday, January 6, 2014, in Chicago. (Photo by Charles Rex Arbogast/AP Photo) 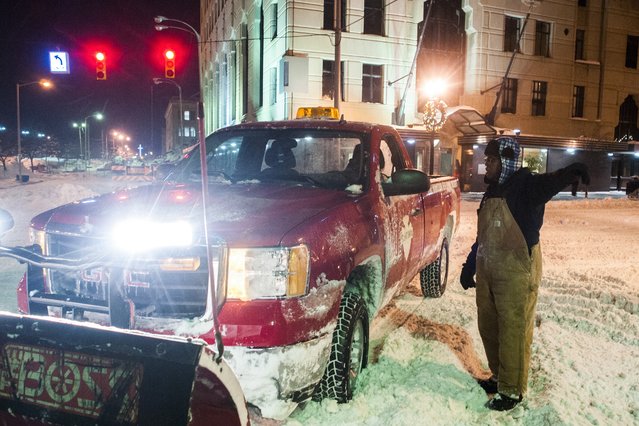 Leroy Griffis, a maintenance supervisor for the Flint Downtown Development Authority, directs a snowplow to an assignment where he will clear streets at about 6:10 a.m., Monday, January 6, 2014, in downtown Flint, Mich., where a recorded 16.2 inches of snow fell. (Photo by Jake May/AP Photo/The Flint Journal-MLive.com) 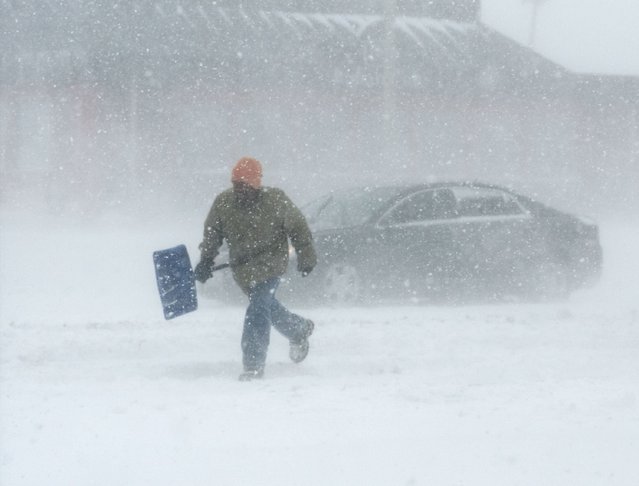 A man carrying a snow shovel walks along Market Street in Champaign, Ill., on Sunday, January 5, 2014. Icy, snow-covered roads and high winds made travel treacherous from the Dakotas and Michigan to Missouri as much of the nation braced for the next winter wallop: a dangerous cold that could break records. (Photo by Holly Hart/AP Photo/The News-Gazette) 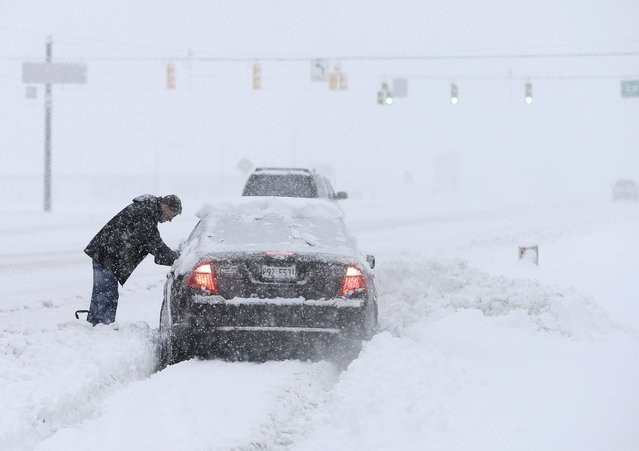 A motorist helps dig out a driver stuck in a snow drift Sunday, January 5, 2014, in Zionsville, Ind. Snow that began in parts of Indiana Saturday night picked up intensity after dawn Sunday with several inches of snow on the ground by midmorning and more on the way. (Photo by Darron Cummings/AP Photo) 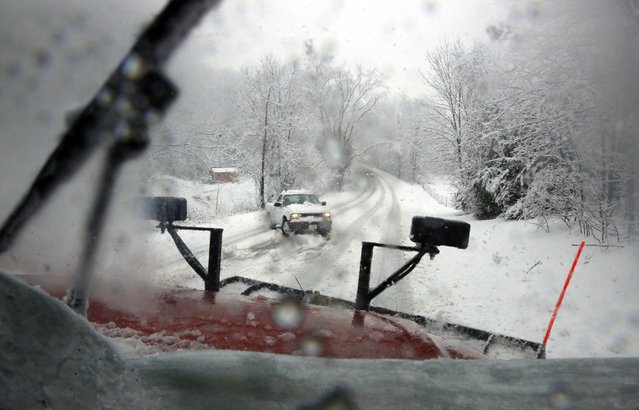 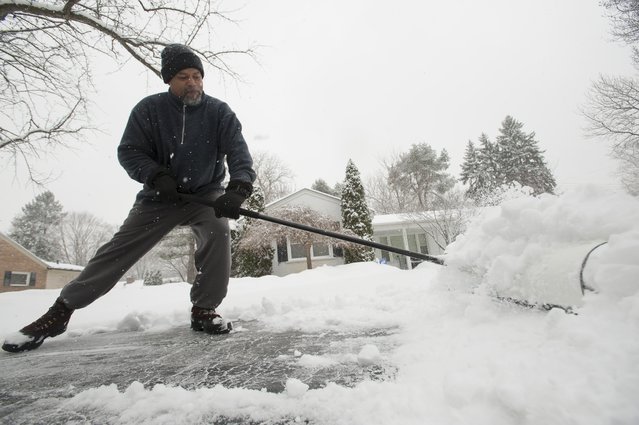 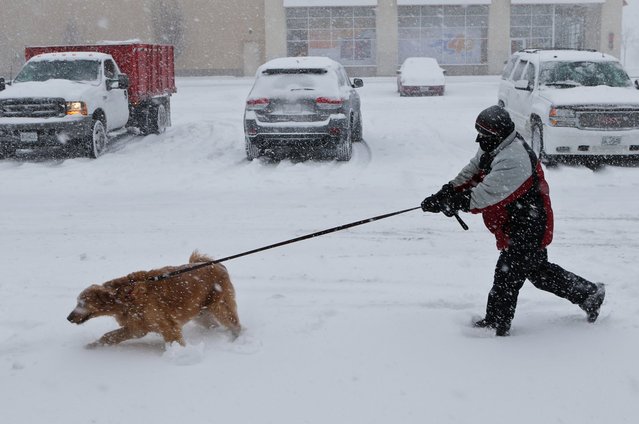 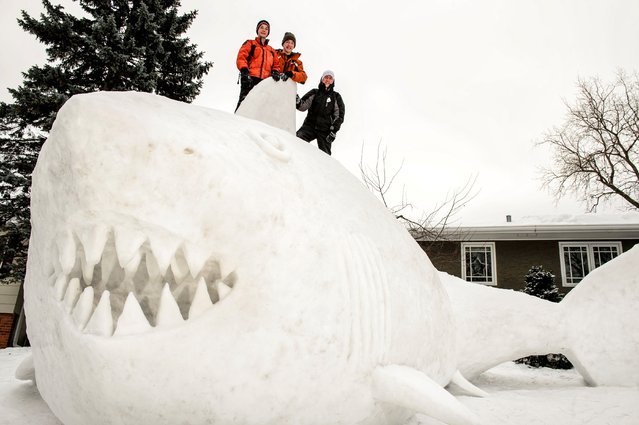 Three brothers, from left, Connor, Trevor and Austin Bartz built this 16 foot high snow shark in the front yard of their New Brighton, Minn. home, Wednesday, January 1, 2014. It took them around 95 hours of work and they gathered the snow from houses in their neighborhood. (Photo by Glen Stubbe/AP Photo/Star Tribune) 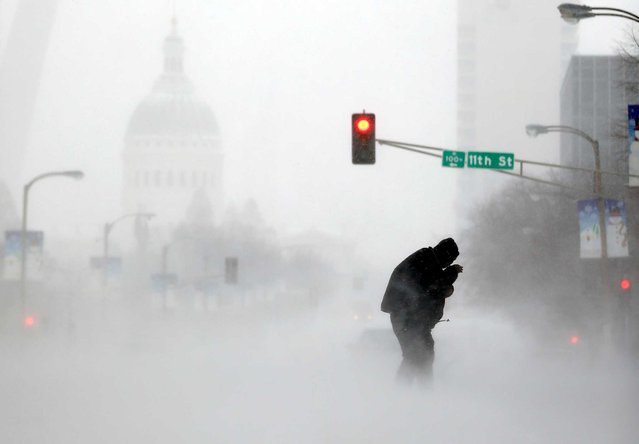 A person struggles to cross a street in blowing and falling snow as the Gateway Arch appears in the distance Sunday, January 5, 2014, in St. Louis. Snow that began in parts of Missouri Saturday night picked up intensity after dawn Sunday with several inches of snow on the ground by midmorning and more on the way. (Photo by Jeff Roberson/AP Photo) 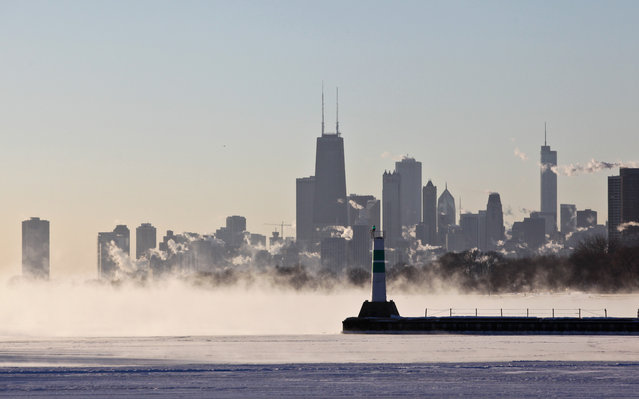 A blanket of fog covers Lake Michigan along the Chicago shoreline Monday, January 6, 2014 as temperatures dove well below zero and wind chills were expected to reach 40 to 50 below. A whirlpool of frigid, dense air known as a “polar vortex” descended Monday into much of the U.S. (Photo by Teresa Crawford/AP Photo) 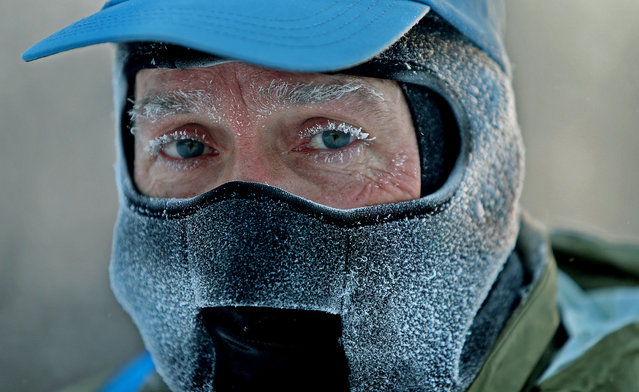 John Brower snow in his eye lashes after running to work in the frigid -20 weather Monday, January 6, 2014 in Minneapolis. (Photo by Elizabeth Flores/AP Photo/The Star Tribune) 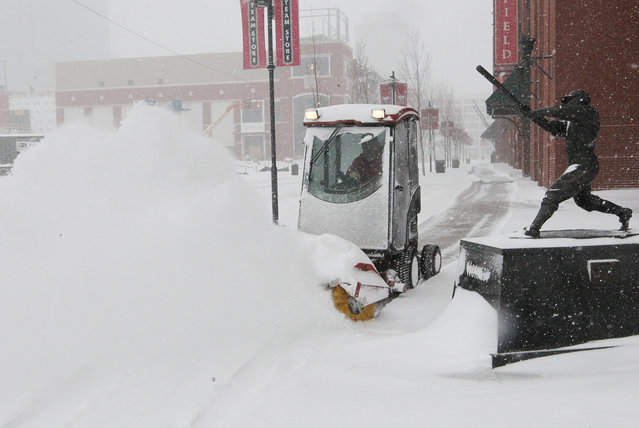 A snow sweeper clears the area around the Rogers Hornsby statue of snow in front of Busch Stadium in St. Louis on January 5, 2014. The St. Louis area has been hit with 10.6 inches of snow in six hours and bitter cold up to minus 40 degrees may last for several days. (Photo by Bill Greenblatt/UPI) 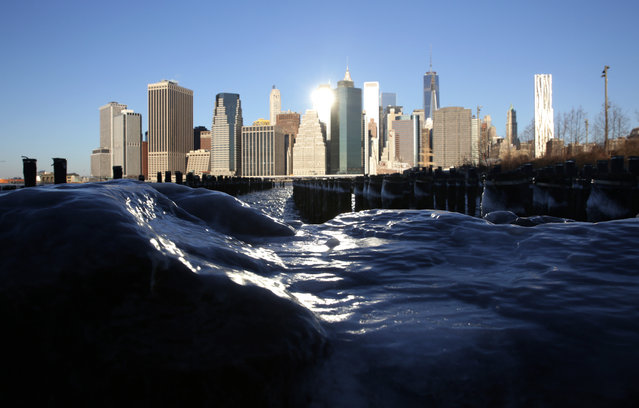 Ice forms on rocks on the Brooklyn waterfront across from lower Manhattan in New York, Tuesday, January 7, 2014. The high temperature is expected to be 10 degrees in the city but wind chills will make it feel more like minus 10. (Photo by Peter Morgan/AP Photo)
Edit Del
07 Jan 2014 08:49:00, post received 0 comments
Publication archive:
←   →
Popular tags:
All tags
Last searches: