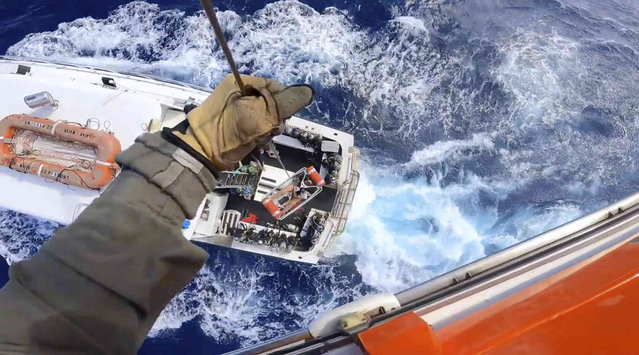 This image provided by U.S. Coast Guard a Coast Guard Air Station Miami MH-65 Dolphin helicopter crew rescues a man after he was bitten by a shark while fishing aboard a vessel near Bimini, Bahamas, on Monday, February 21, 2022. The man was taken to Jackson Memorial Hospital in Miami, where he was in stable condition. (Photo by U.S. Coast Guard via AP Photo) 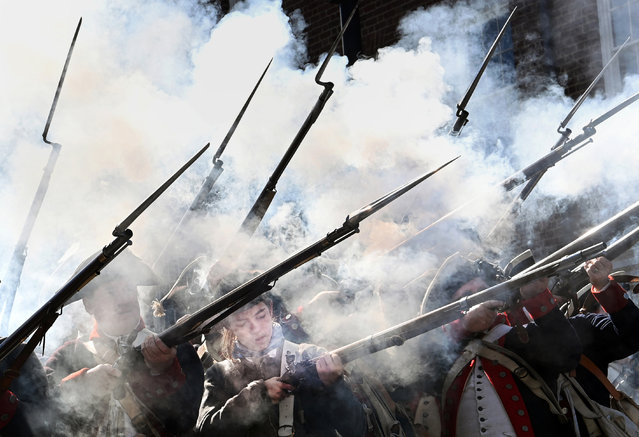 Members of the 1st Virginia Regiment of the Continental Army put on a firing display while taking part in the George Washington Birthday Parade on Monday February 21, 2022 in Alexandria, VA. (Photo by Matt McClain/The Washington Post) 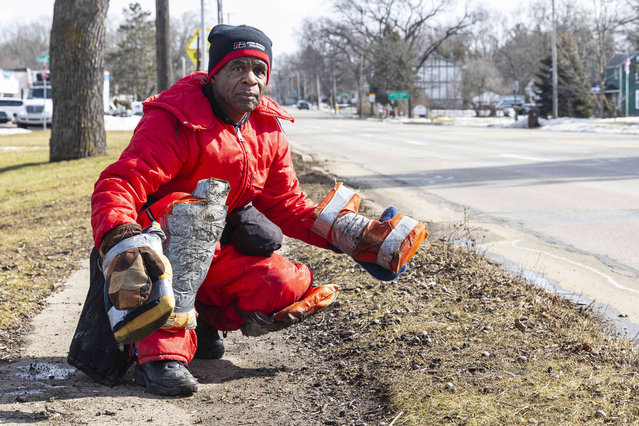 Bobby Holley, 76, prepares to cross the street as the sidewalk along M-89 was covered in mud and water in Calhoun County, Mich., Monday, February 21, 2022. Holley is crawling 21 miles, from Battle Creek to downtown Kalamazoo to protest gun violence. Holley started his crawl at 10 a.m., Feb. 21 and estimates he will reach Kalamazoo on Feb. 23. (Photo by Joel Bissell/MLive.com/Kalamazoo Gazette via AP Photo) 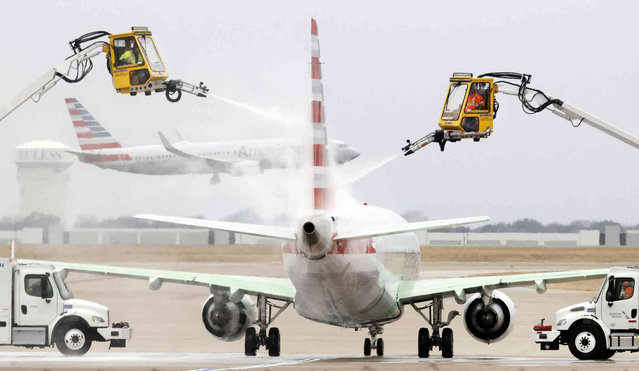 Aerial crews deice an American Airlines jet before it can take off as another lands at Dallas/Fort Worth International Airport, Wednesday, February 23, 2022, in Dallas. Light precipitation was falling as temperatures were in the mid 20's. (Photo by Tom Fox/The Dallas Morning News via AP Photo) 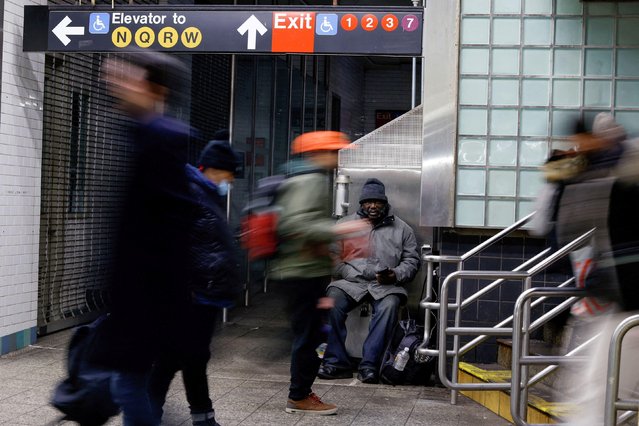 A homeless charges his mobile devise inside the subway station in New York, U.S., February 19, 2022. (Photo by Eduardo Munoz/Reuters) 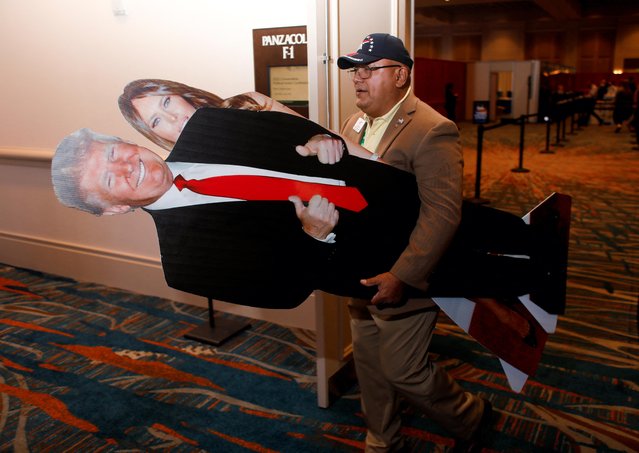 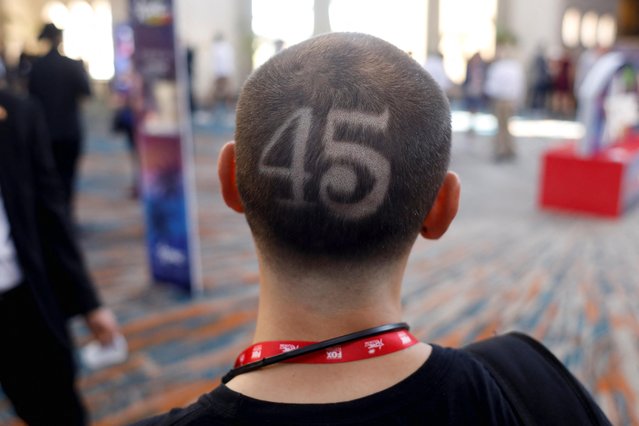 Adam Radogna, with the number 45 shaved on the back of his head to honor Donald Trump as the 45th President, is pictured during the Conservative Political Action Conference (CPAC) in Orlando, Florida, U.S. February 24, 2022. (Photo by Octavio Jones/Reuters) 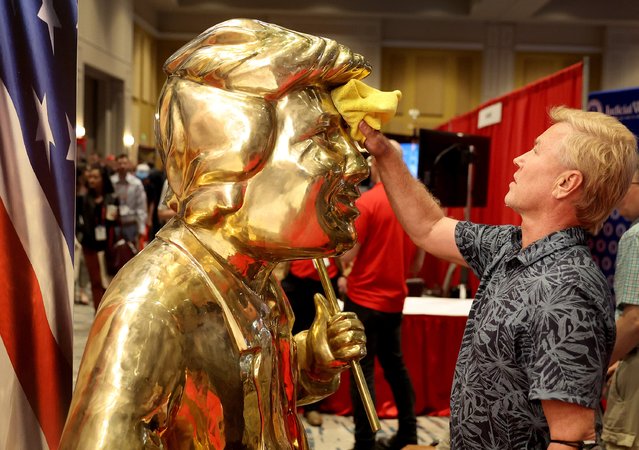 Artist Tom Zegan uses a cloth to wipe down the statue he created of former U.S. President Donald Trump at the Conservative Political Action Conference (CPAC) at The Rosen Shingle Creek on February 24, 2022 in Orlando, Florida. CPAC, which began in 1974, is an annual political conference attended by conservative activists and elected officials. (Photo by Joe Raedle/Getty Images) 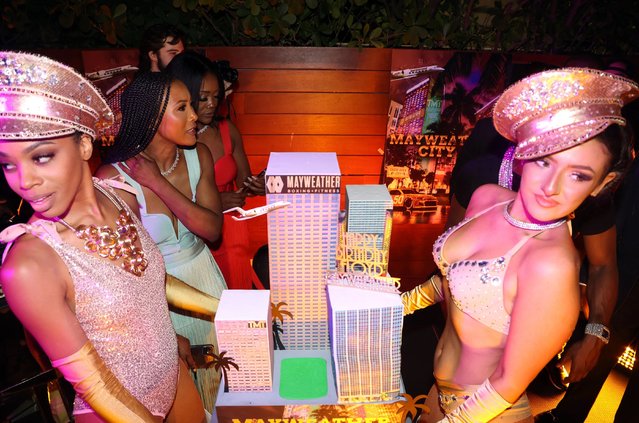 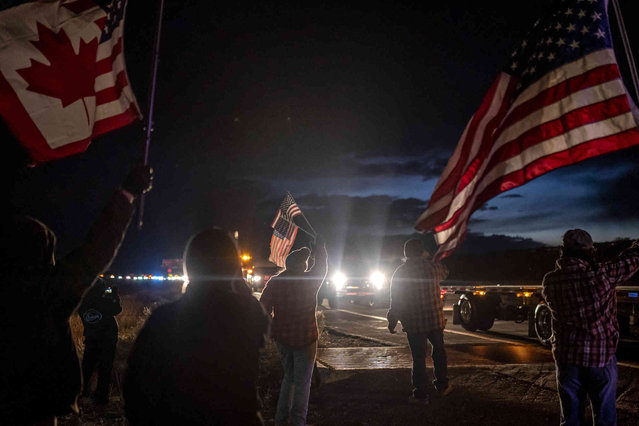 Supporters cheer on a trucker caravan as it pulls off the highway for the night while heading toward Washington D.C. to protest COVID-19 mandates on Wednesday, February 23, 2022, in Kingman, Az. (Photo by Nathan Howard/AP Photo) 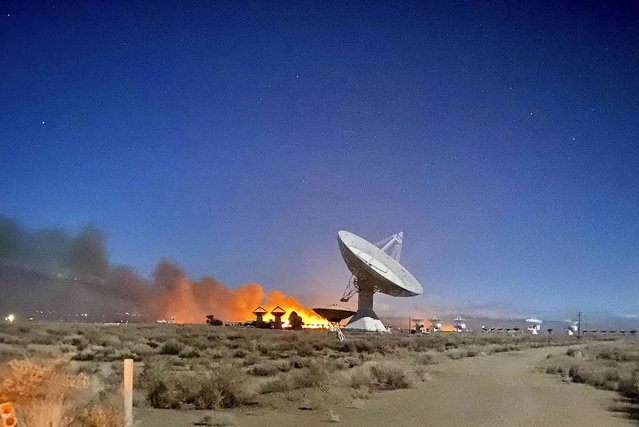 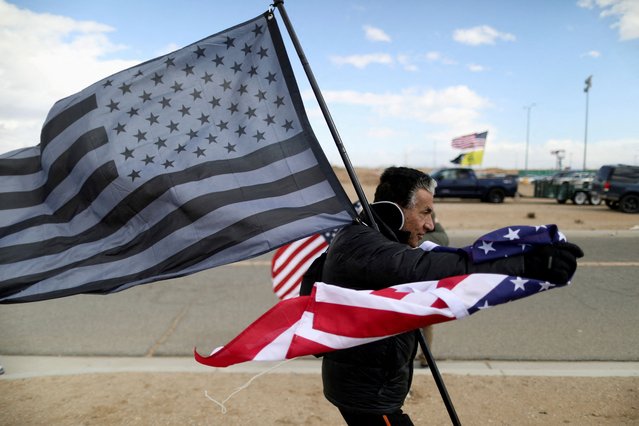 Truckers and their supporters start to gather before a convoy leaves the following morning bound for the nation's capital to protest against coronavirus disease (COVID-19) vaccine mandates, in Adelanto, California, U.S. February 22, 2022. (Photo by David Swanson/Reuters) 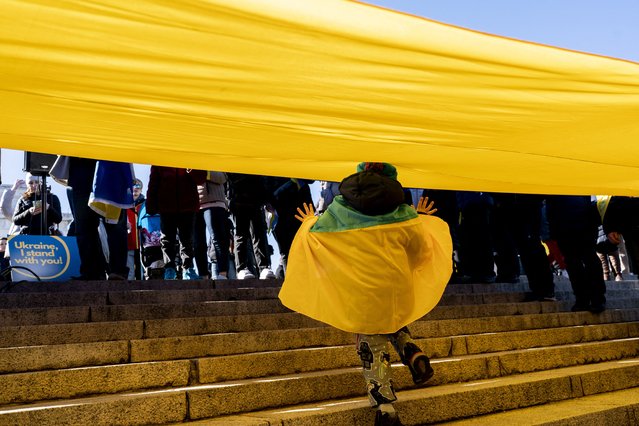 A child runs under the Ukrainian flag as people gather for a Day of Solidarity with Ukraine at the Lincoln Memorial in Washington, DC, on February 20, 2022. The eighth annual commemoration and vigil was held to honor those who died in the Ukrainian Revolution of Dignity. (Photo by Stefani Reynolds/AFP Photo) 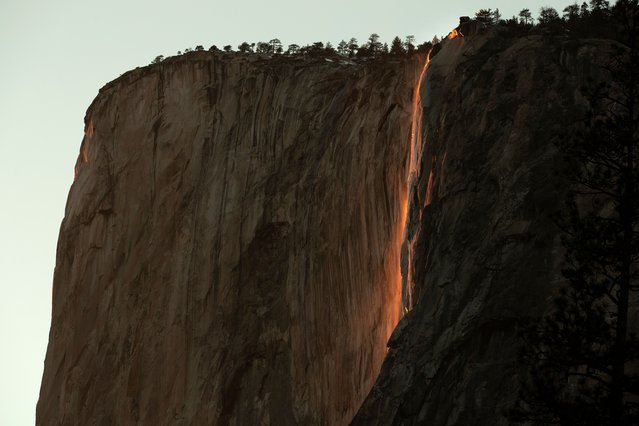 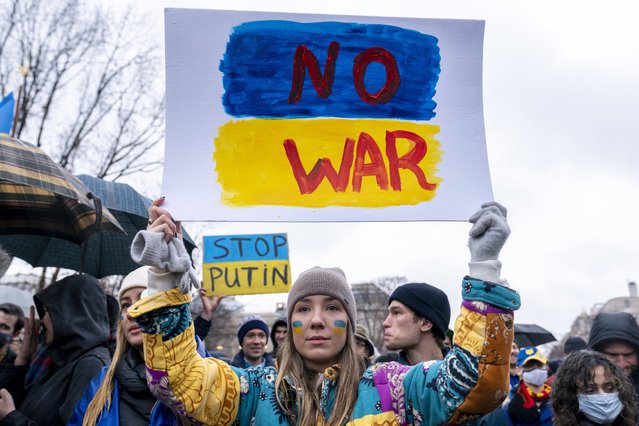 A tear rolls down through the colors of the Ukrainian flag on the cheek of Ukranian Oleksandra Yashan of Arlington, Va., as she becomes emotional while holding a sign that reads “No War” during a vigil to protest the Russian invasion of Ukraine in Lafayette Park in front of the White House in Washington, Thursday, February 24, 2022. (Photo by Andrew Harnik/AP Photo) 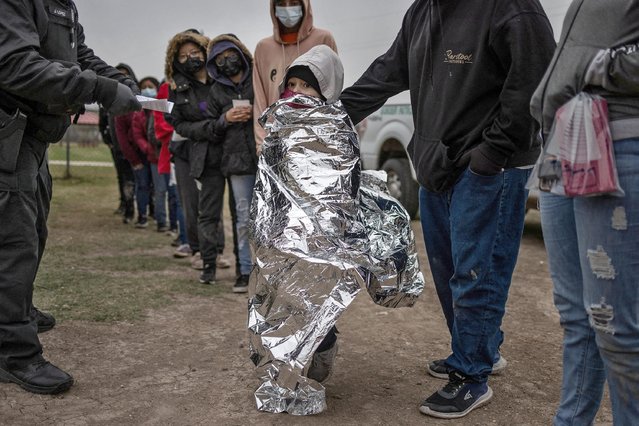 Nelli, a six year old unaccompanied migrant girl from Honduras, stands wrapped in an emergency blanket as she is asked by a Customs and Border Protection official to board a bus after she and others crossed the Rio Grande river into the United States from Mexico, in La Joya, Texas, U.S., February 23, 2022. Nearly a dozen unaccompanied children, who were seeking asylum from El Salvador, Guatemala, Honduras and Nicaragua, were supplied blankets as a cold front dropped temperatures to a blustery 43 Fahrenheit (6.1 Celsius). (Photo by Adrees Latif/Reuters) 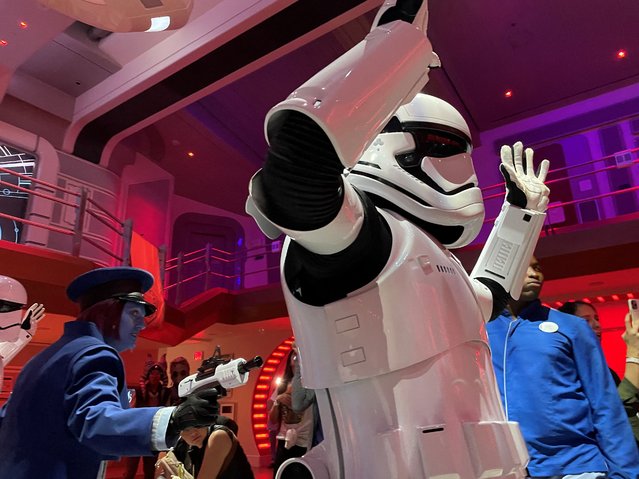 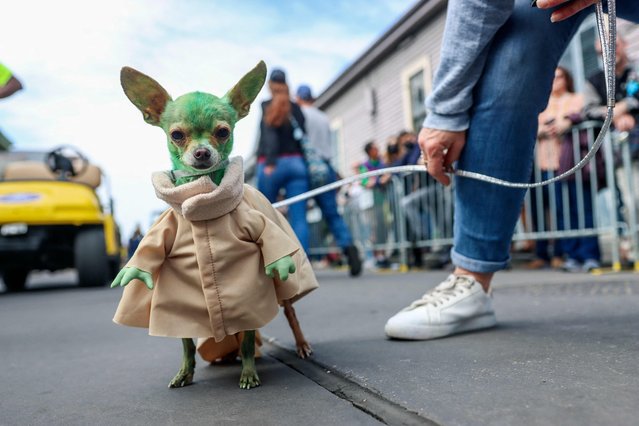 “Baby”, a Chihuahua who is dressed as Baby Yoda, marches in the French Quarter during the Krewe of Barkus Mardi Gras Parade in New Orleans, Louisiana, February 20, 2022. This year marks the return of Mardi Gras to New Orleans since celebrations were cancelled over the two past years due to the Covid-19 pandemic. (Photo by Sandy Huffaker/AFP Photo) 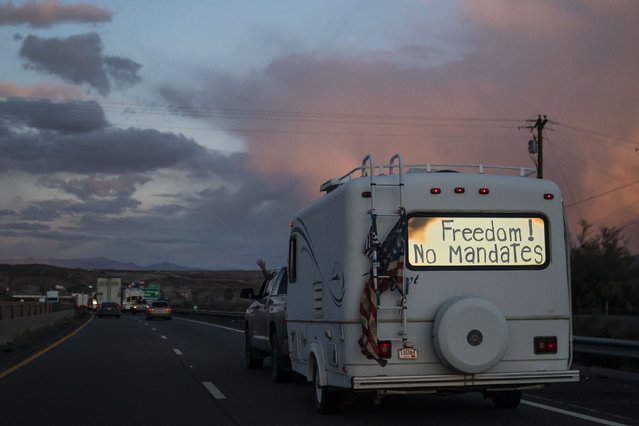 A trailer with the words “Freedom! No Mandate” on its back window travels with a trucker caravan heading toward Washington D.C. to protest COVID-19 mandates on Wednesday, February 23, 2022, near Needles, Calif. (Photo by Nathan Howard/AP Photo) 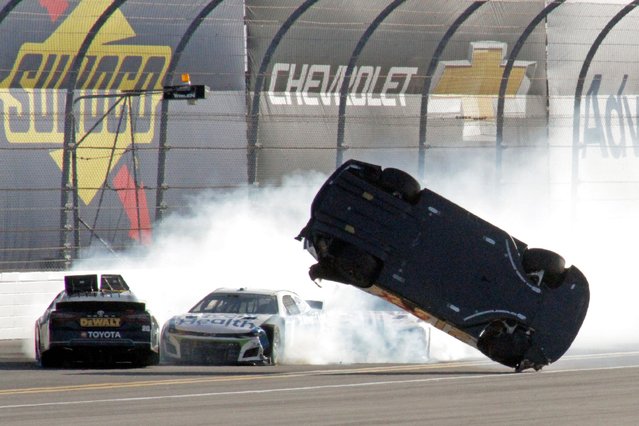