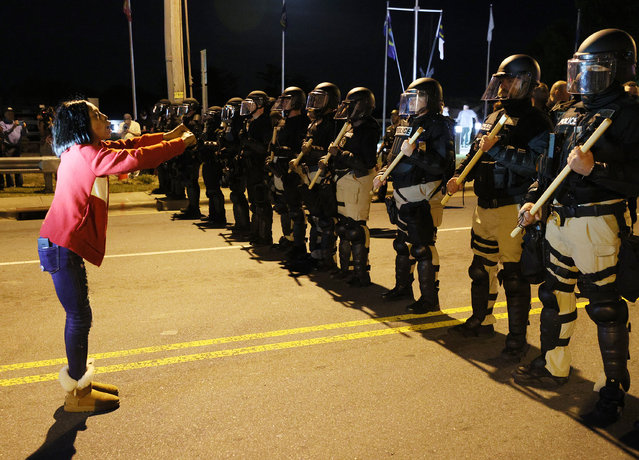 Patrice Revelle stands in front of police in riot gear as they force people off a street as they protest the killing of Andrew Brown Jr. on April 27, 2021 in Elizabeth City, North Carolina. The police were enforcing an 8 pm curfew announced after the shooting death of Brown by Pasquotank County Sheriff deputies on April 21. (Photo by Joe Raedle/Getty Images) 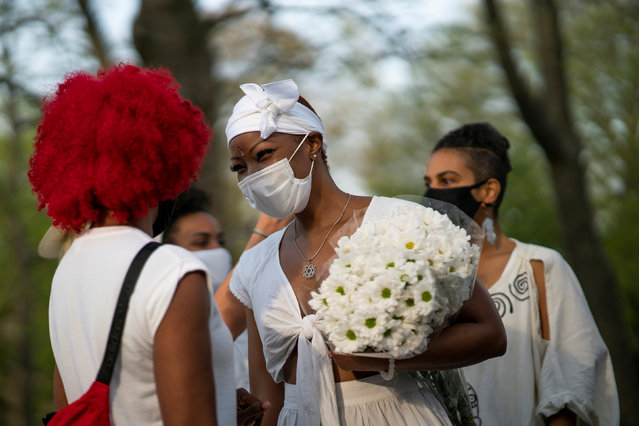 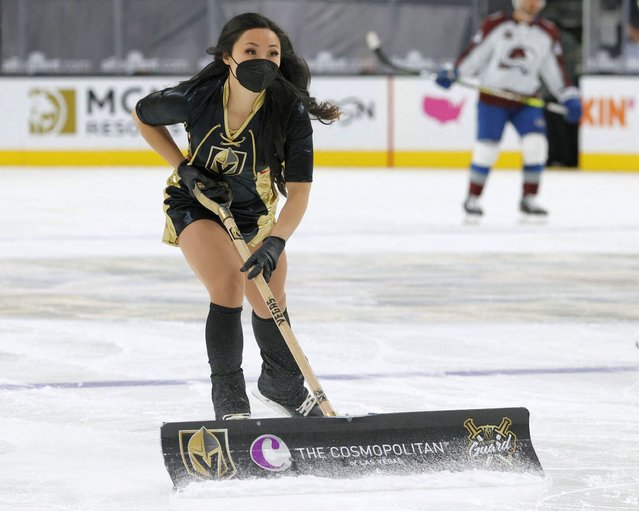 A member of the Knights Guard cleans the ice during the Vegas Golden Knights' game against the Colorado Avalanche at T-Mobile Arena on April 28, 2021 in Las Vegas, Nevada. The Golden Knights defeated the Avalanche 5-2. (Photo by Ethan Miller/Getty Images via AFP Photo) 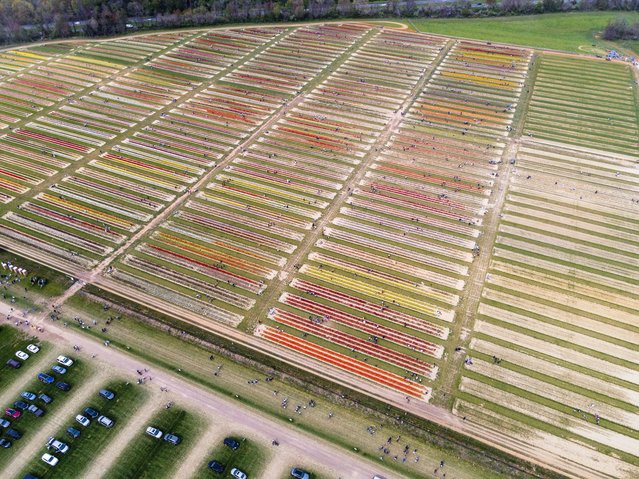 Aerial view of tulip farms is seen as hundreds of people visit Holland Ridge Farms as they enjoy and pick up tulips in Cream Ridge of New Jersey, United States on April 24, 2021. (Photo by Tayfun Coskun/Anadolu Agency via Getty Images) 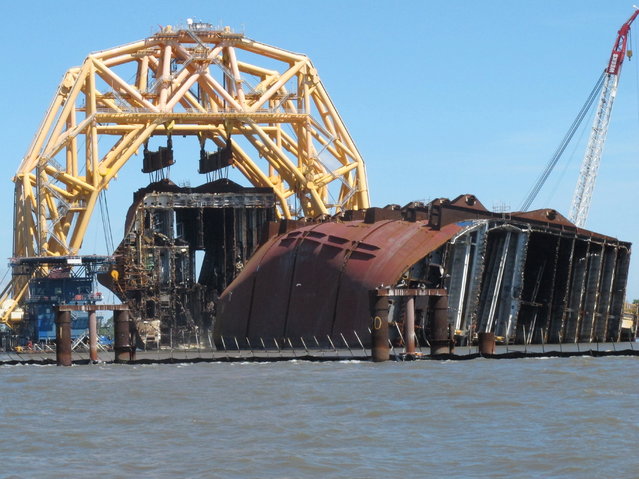 A towering crane pulls the engine room section away from the remains of the capsized cargo ship Golden Ray on Monday, April 26, 2021, offshore of St. Simons Island, Ga. The South Korean vessel capsized with roughly 4,200 vehicles in its cargo decks in September 2019. The engine room section is the fourth giant chunk of the ship to be cut away and removed since demolition began in November 2020. (Photo by Russ Bynum/AP Photo) 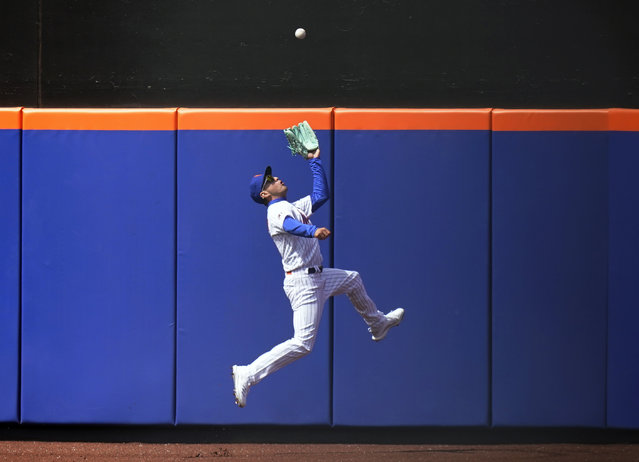 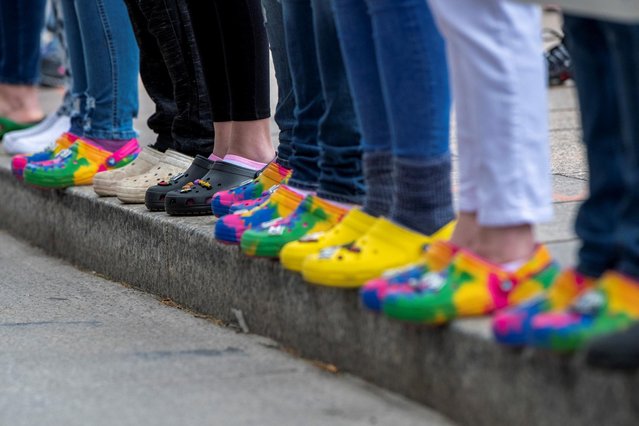 People line the sidewalk outside of the Ohio Statehouse as part of the “Show Your Crocs for Ma'Khia Bryant” demonstration following this week's police shooting of 16-year-old Ma'Khia Bryant in Columbus, Ohio, U.S., April 24, 2021. (Photo by Gaelen Morse/Reuters) 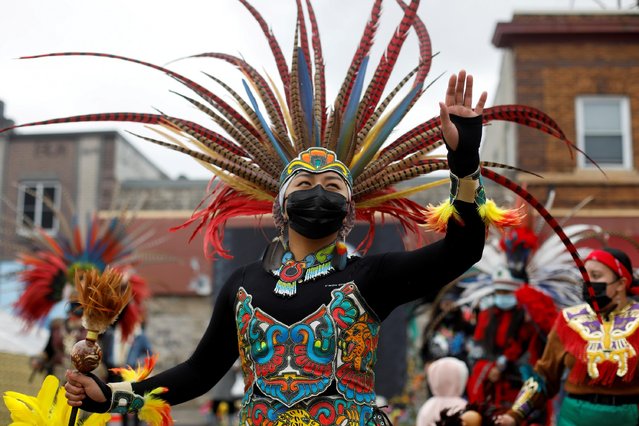 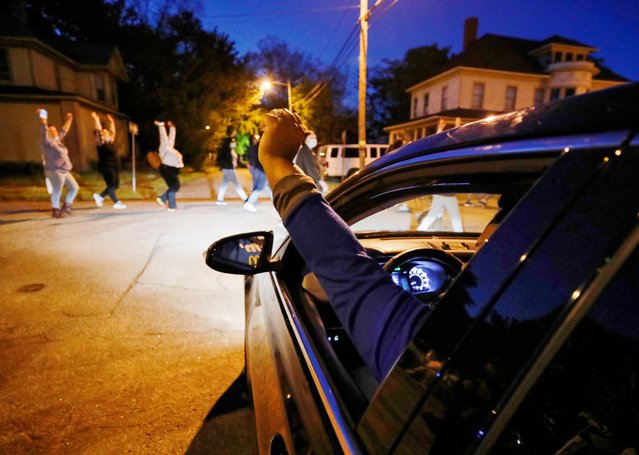 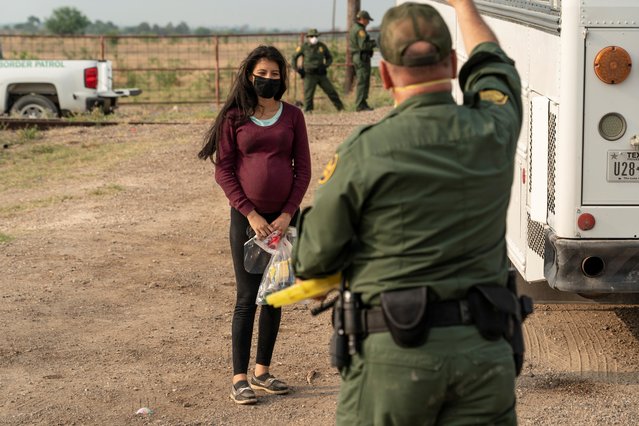 A pregnant asylum-seeking migrant woman waits to board a bus to be transported by the U.S. Border Patrol after crossing the Rio Grande into the United States from Mexico in La Joya, Texas, April 27, 2021. (Photo by Go Nakamura/Reuters) 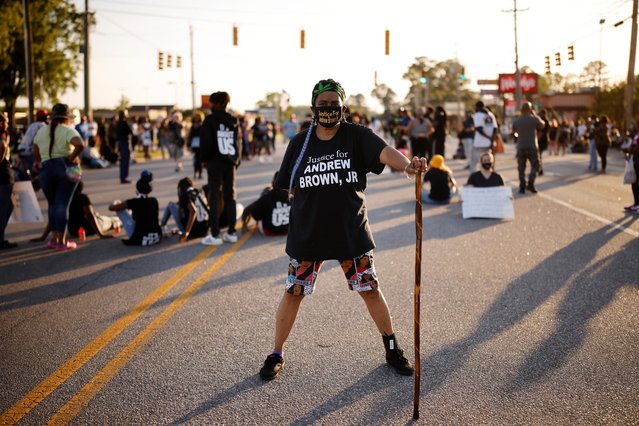 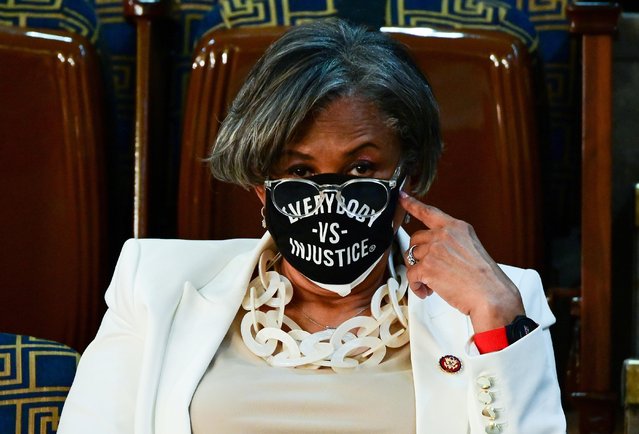 A member of the Congress looks on before U.S. President Joe Biden speaks to a joint session of Congress at the U.S. Capitol in Washington, DC, U.S. April 28, 2021. (Photo by Jim Watson/Pool via Reuters) 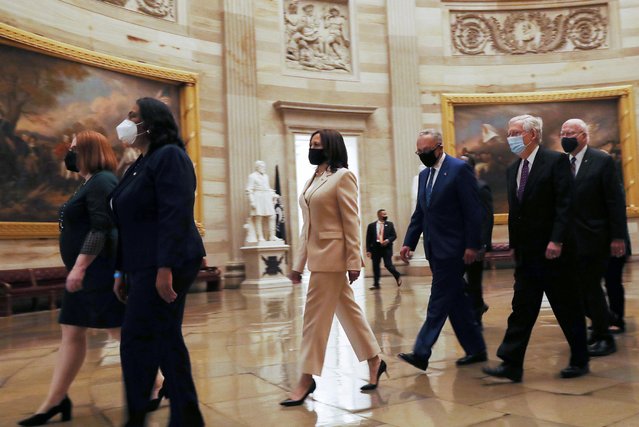 U.S. Vice President Kamala Harris leads a procession of senators through the Rotunda from the Senate Chamber to the House Chamber ahead of the first address by U.S. President Joe Biden to a joint session of the U.S. Congress at the U.S. Capitol in Washington, U.S., April 28, 2021. (Photo by Leah Millis/Reuters) 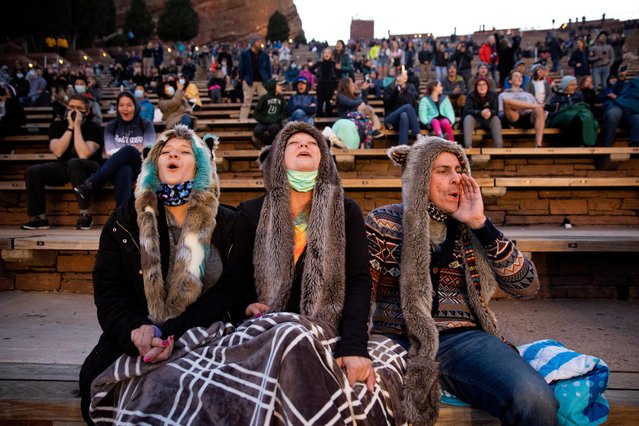 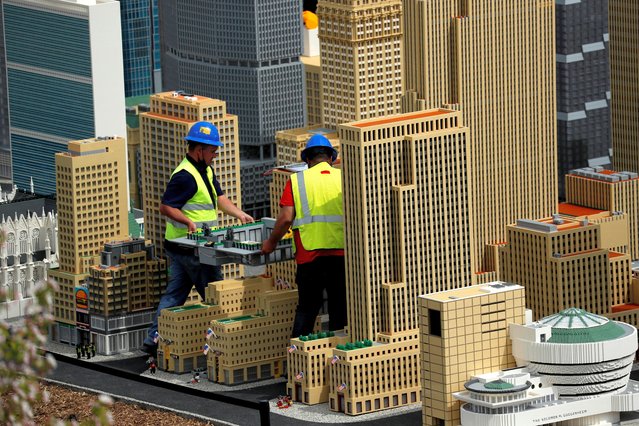 Workers carry the skating rink portion of Rockefeller Center as they work on the New York City section of the “Miniland” area of the new Legoland New York Resort theme park during a press preview of the park, which is currently under construction, with plans to open to the public in the summer of 2021 in Goshen, New York, U.S., April 28, 2021. (Photo by Mike Segar/Reuters) 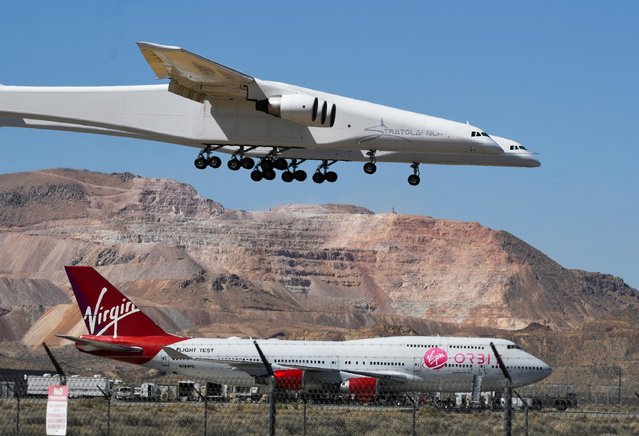 The Stratolaunch plane, the world's largest, comes in for a landing over Virgin Orbit 747 Cosmic Girl after it performed a 2nd test flight in Mojave, California, U.S., April 29, 2021. The plane, designed to transport hypersonic vehicles and facilitate easy access to space, made its second test flight, two years after its first voyage. (Photo by Gene Blevins/Reuters) 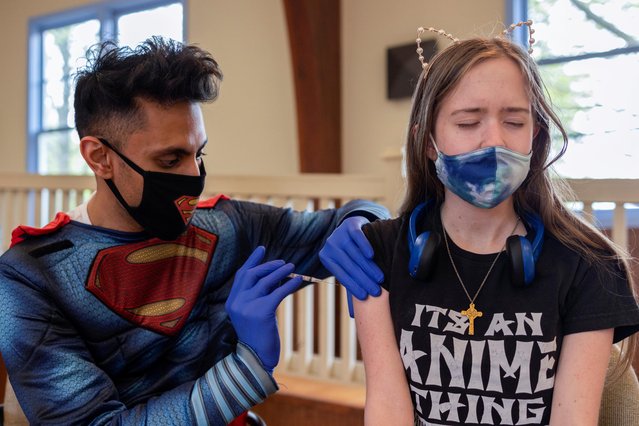 Kira Lundell, 16, who is on the autism spectrum, receives a coronavirus disease (COVID-19) vaccine at Variety - the Children’s Charity of the Delaware Valley during a vaccine clinic on their campus in conjunction with Skippack Pharmacy in Worcester, Pennsylvania, U.S., April 29, 2021. (Photo by Hannah Beier/Reuters) 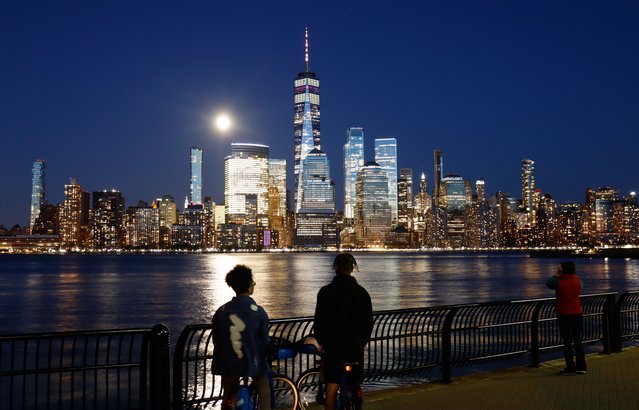 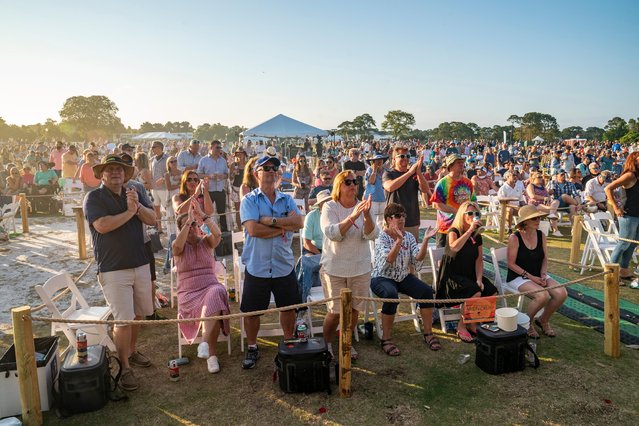 A view of the crowd at Moon Crush Music Vacation at Seascape Golf Course on April 27, 2021 in Miramar Beach, Florida. All guests were assigned a Contained Open-Air Viewing Environment (“Cove”) at least 6 feet from other Coves on all sides and separated by barriers. (Photo by Erika Goldring/Getty Images) 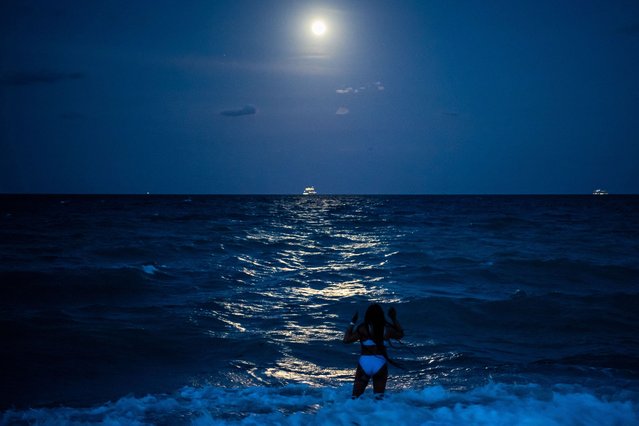 A woman stands in the water under the glow of the Super Pink Full Moon reflected in the ocean in Miami Beach, on April 26, 2021. (Photo by Chandan Khanna/AFP Photo)
Edit Del
03 May 2021 09:09:00, post received 0 comments
Publication archive:
←   →
Popular tags:
All tags
Last searches: