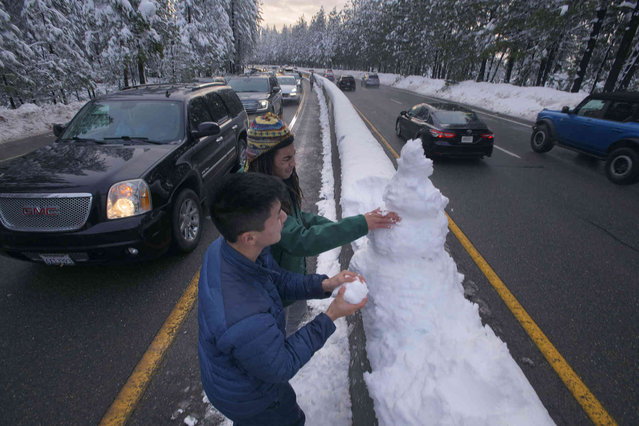 legs. Jonas Pao, left, and Phela Durosinmi, of Palo Alto, Calif., had time to build a snowman on the highway median while traffic was at a standstill along eastbound US 50 in Pollock Pines, Calif., Tuesday, December 28, 2021. (Photo by Randall Benton/AP Photo) 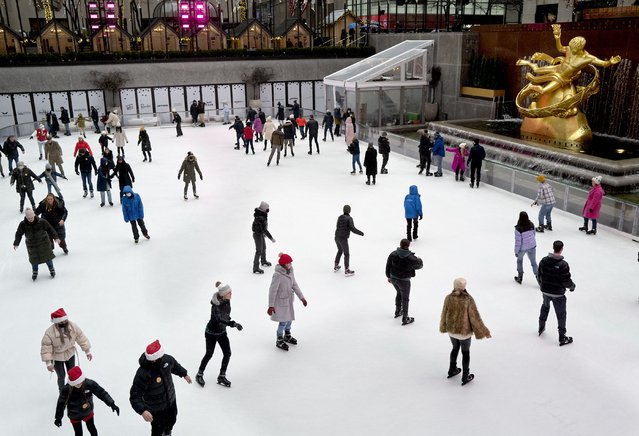 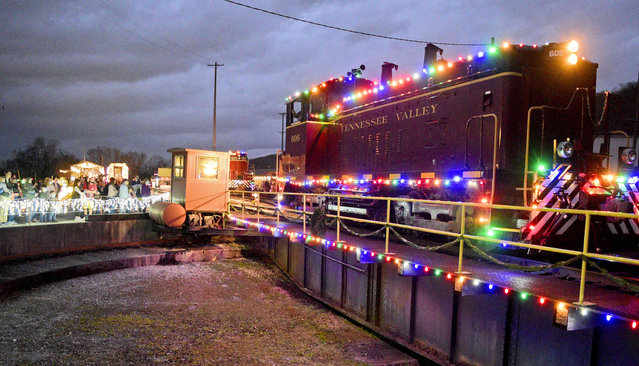 Passengers line the turntable as engine 606 is prepared to be turned at the East Chattanooga Station, on Tuesday, December 28, 2021 in Chattanooga, Tenn., during the The Tennessee Valley Railroad Museum's Holiday Light Train. (Photo by Robin Rudd/Chattanooga Times Free Press via AP Photo) 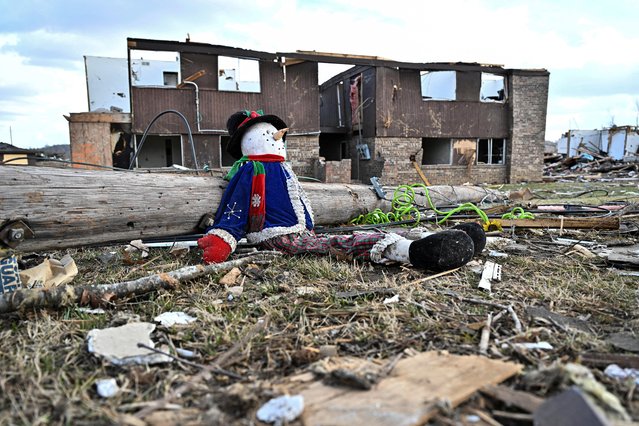 A Frosty the Snowman doll sits against a fallen utility pole on a Christmas morning in a heavily damaged neighborhood, after tornadoes ripped through several U.S. states, in Dawson Springs, Kentucky, U.S., December 25, 2021. (Photo by Jon Cherry/Reuters) 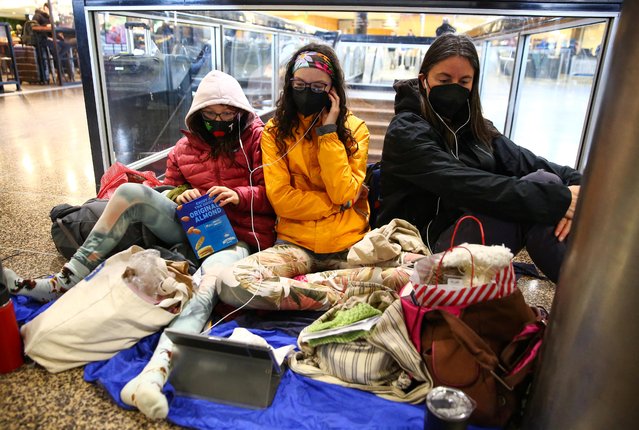 Lisa Cena of Bend, Oregon, watches videos with children Simone, 10, and Vida, 13, as they wait to check in for their flight after missing their original flight from Seattle to Hawaii the previous night due to delays at the Bend Municipal Airport, as dozens of flights were listed as cancelled or delayed at Seattle-Tacoma International Airport (Sea-Tac) in Seattle, Washington, U.S. December 27, 2021. (Photo by Lindsey Wasson/Reuters) 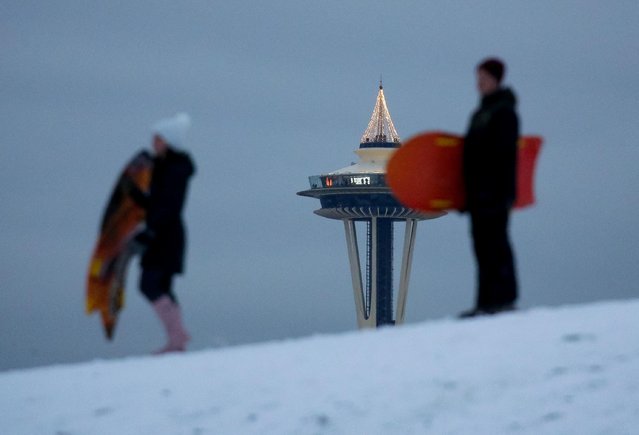 Visitors at the top of the Space Needle are seen as a couple pauses at the top of Kite Hill at Gas Works Park, a popular sledding location, after a recent snowfall in Seattle, Washington, U.S. December 27, 2021. (Photo by Lindsey Wasson/Reuters) 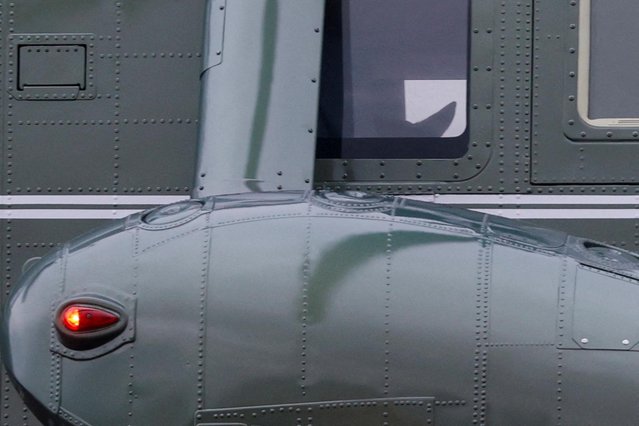 An ear of U.S. President Joe Biden's new dog Commander is visible in a window of the Marine One helicopter as U.S. President Biden and first lady Jill Biden arrive for vacation at Gordons Pond in Rehoboth Beach, Delaware, U.S. December 27, 2021. (Photo by Jonathan Ernst/Reuters) 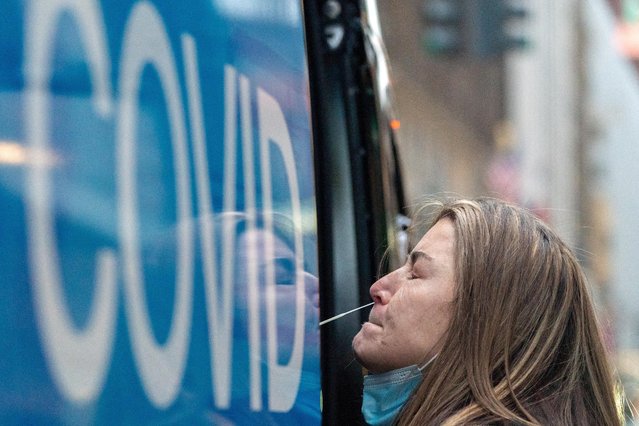 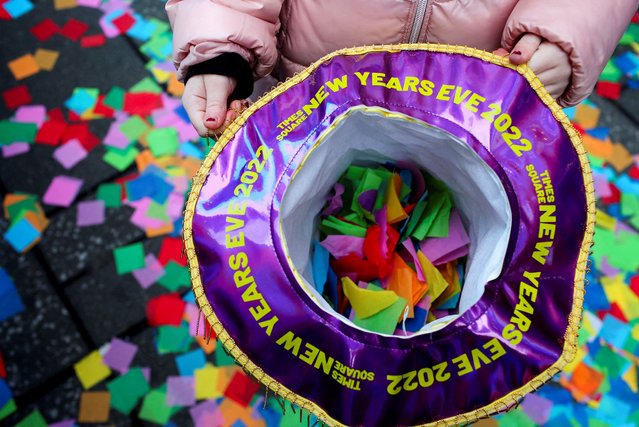 Jessica Martini, 7, holds a hat with pieces of confetti in it, as New Year's Eve confetti is “flight-tested” ahead of celebrations, in the Manhattan borough of New York City, U.S., December 29, 2021. (Photo by Yana Paskova/Reuters) 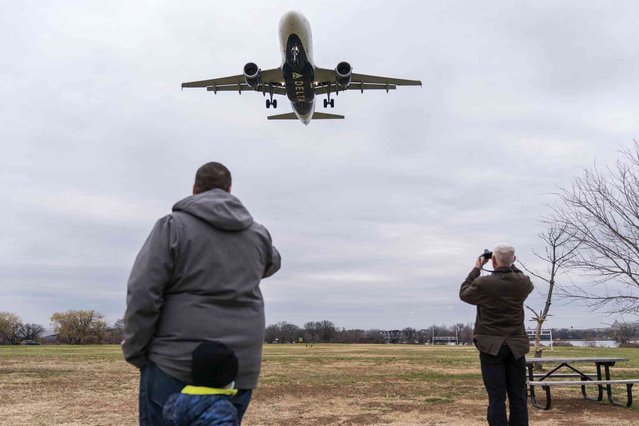 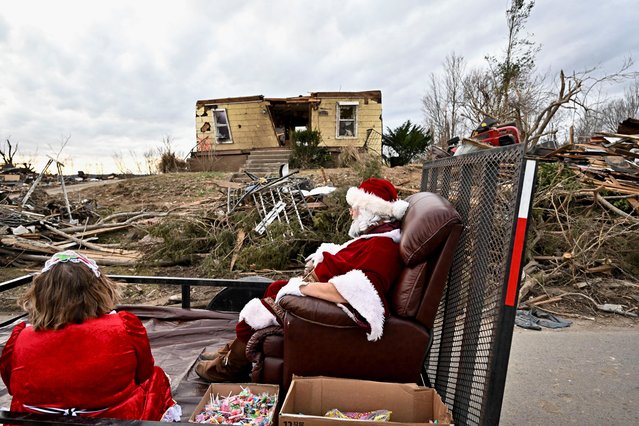 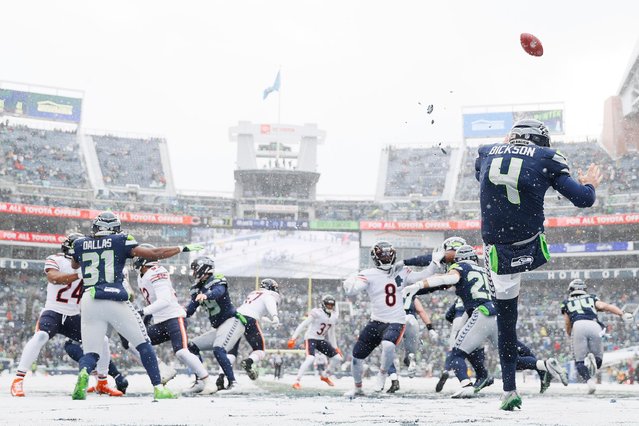 Michael Dickson #4 of the Seattle Seahawks punts the ball during the second quarter against the Chicago Bears at Lumen Field on December 26, 2021 in Seattle, Washington. (Photo by Steph Chambers/Getty Images) 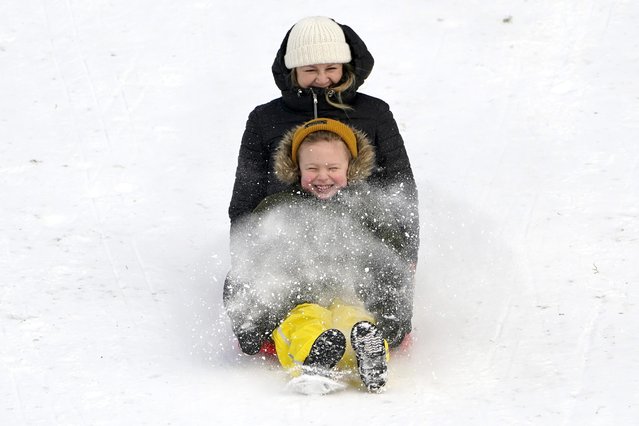 Tylor Perillo, 5, kicks up snows as she and her aunt Loraie Tylor sled down a city park hill where nearly a foot of snow fell over the weekend, Monday, December 27, 2021, in Bellingham, Wash. Emergency warming shelters were opened throughout western Washington and Oregon as temperatures plunged into the teens and forecasters said an arctic blast would last for several days. (Photo by Elaine Thompson/AP Photo) 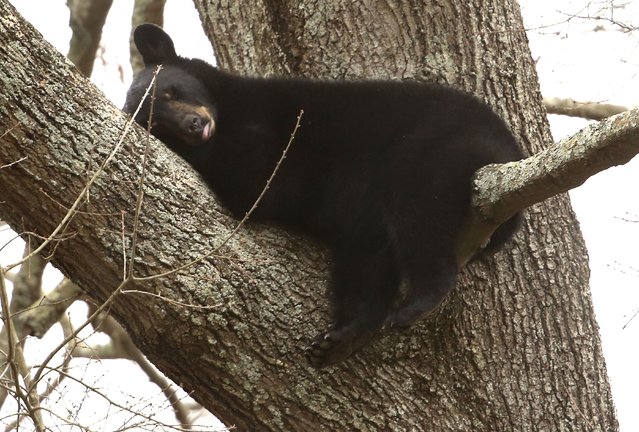 One of four bears found sleeping in a tree on Bruin Drive in Chesapeake, Va., on Monday, December 27, 2021. (Photo by Stephen M. Katz/The Virginian-Pilot via AP Photo) 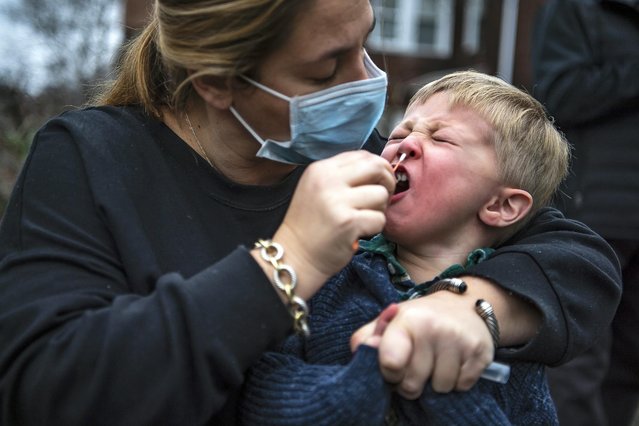 Sarah Glick, helps her son Harrison, 3, by swabbing his nose while getting tested for COVID-19 at the Curative testing van parked off Wightman Street in the Squirrel Hill neighborhood of Pittsburgh, Tuesday, December 28, 2021. Ms. Glick said they were getting tested as a precaution before visiting her mother. (Photo by Alexandra Wimley/Pittsburgh Post-Gazette via AP Photo) 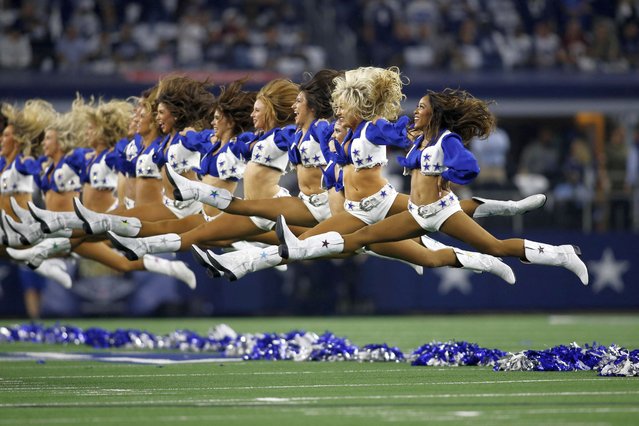 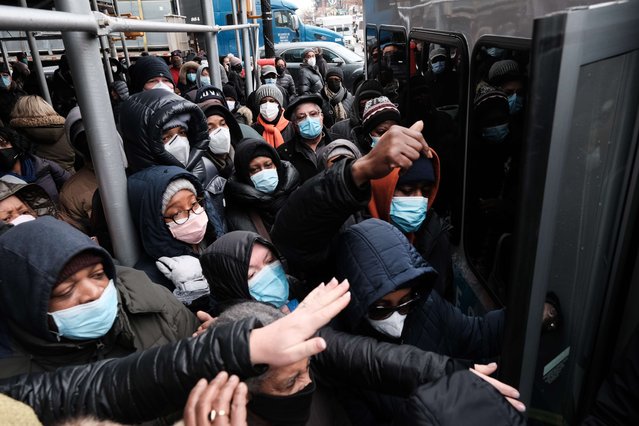 People form a large crowd as they attempt to receive COVID-19 testing kits from city workers distributing the kits along Flatbush Avenue on December 24, 2021 in the Brooklyn borough of New York City. The city is handing out thousands of the kits, which include two tests per box, in order to lesson the surge of people in long lines at testing sites. New York City has once again seen COVID-19 case numbers rise as the new omicron variant has become the dominant version of the coronavirus in the U.S., accounting for 73 percent of new cases. (Photo by Spencer Platt/Getty Images/AFP Photo) 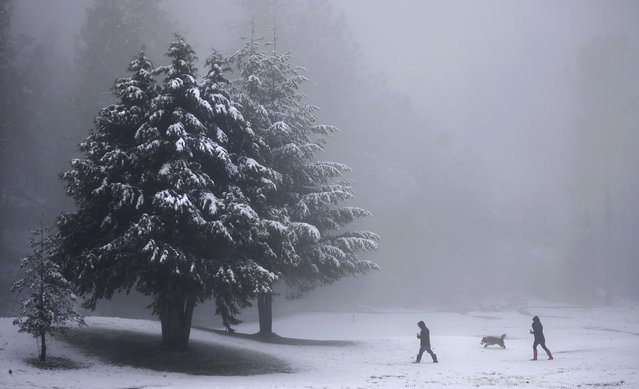 Kelseyville residents Horacio Montes-De Oca, left, and Hanna Scully and their dog Aselo walk in the snow on Cobb Mountain, Calif., at Adams Springs, Tuesday, December 28, 2021, as another in a long line of rain and snow storms hammer the West Coast. (Photo by Kent Porter/The Press Democrat via AP Photo) 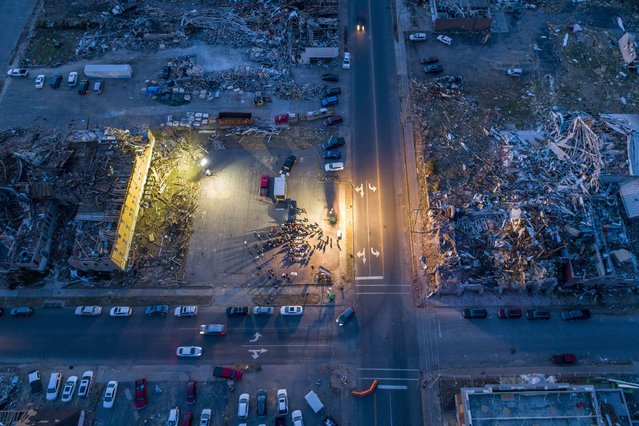 Members of Mayfield First Presbyterian Church and Mayfield First Christian Church gather in an empty lot between their destroyed churches for a joint Christmas Eve service in Mayfield, Ky., Friday, December 24, 2021. A tornado devastated the community about two weeks ago. (Photo by Ryan C. Hermens/Lexington Herald-Leader via AP Photo) 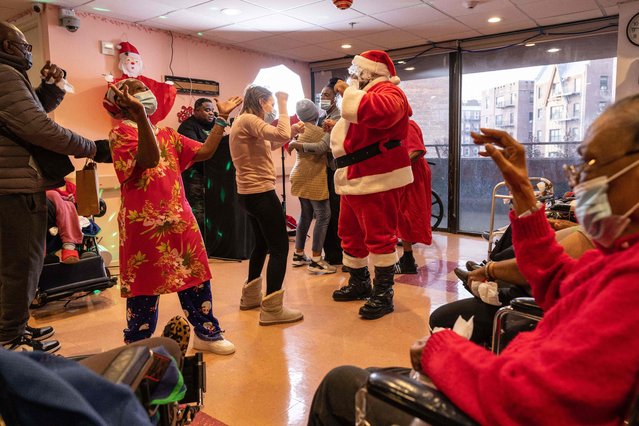