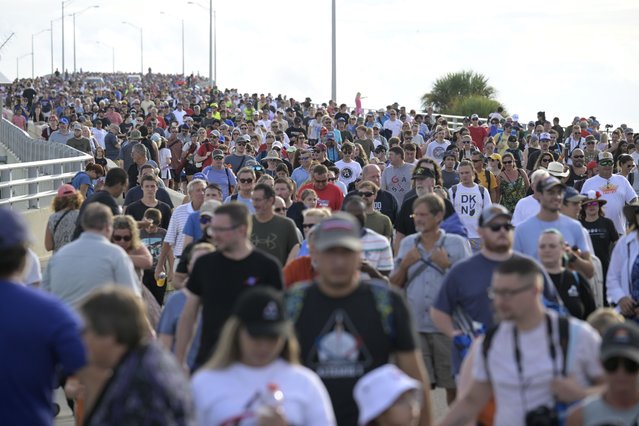 Spectators leave the Max Brewer Bridge after a scrub of the launch of the Artemis I mission to orbit the moon at the Kennedy Space Center, Monday, August 29, 2022, in Titusville, Fla. (Photo by Phelan M. Ebenhack/AP Photo) 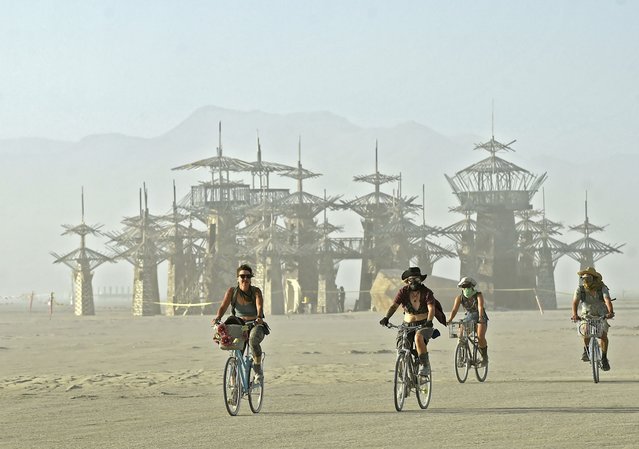 A group of burners ride their bikes as the sun sets on a dusty afternoon on Nevada's Black Rock Desert during Burning Man on Saturday, August 27, 2022. The 2022 Burning Man theme is Waking Dream. (Photo by Andy Barron/The Reno Gazette-Journal via AP Photo) 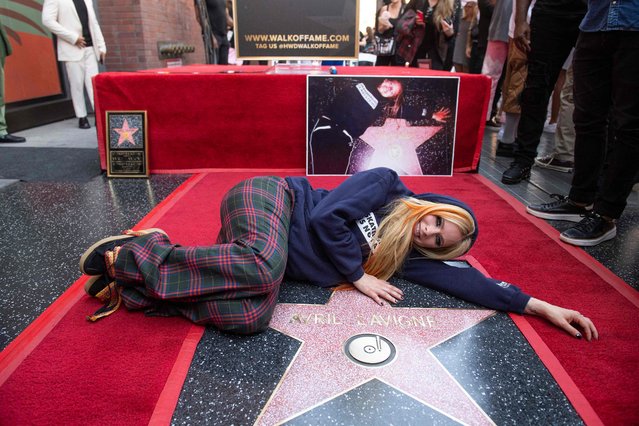 Canadian singer-songwriter Avril Lavgine poses for a photo during a ceremony to unveil her Hollywood Walk of Fame Star in Hollywood, California, on August 31, 2022. (Photo by Valerie Macon/AFP Photo) 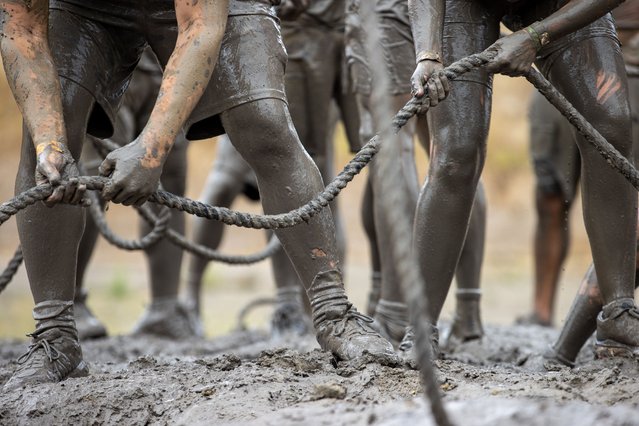 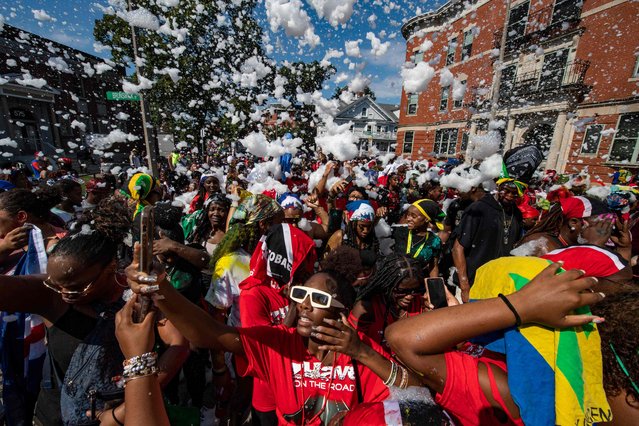 People march and dance as foam is sprayed over them during the 49th Annual Boston Carnival Parade in Boston, Massachusetts on August 27, 2022. The Caribbean American Carnival Association of Boston announced the return of the event after a two-year hiatus due to the Covid-19 pandemic. (Photo by Joseph Prezioso/AFP Photo) 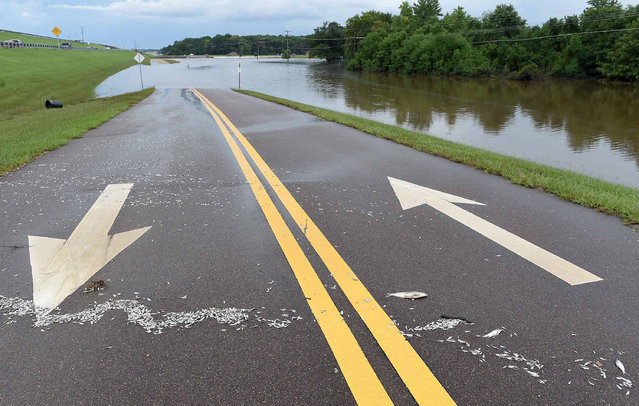 Dead fish litter a water blocked access road to the Pearl River in Jackson, Mississippi, USA, 30 April 2022. Flood waters from the Pearl River have flooded areas of Jackson and damaged the city's primary water treatment facility. According to reports as many as 180,000 residents are without running water for cleaning, cooking, drinking and flushing toilets. (Photo by Chris Todd/EPA/EFE) 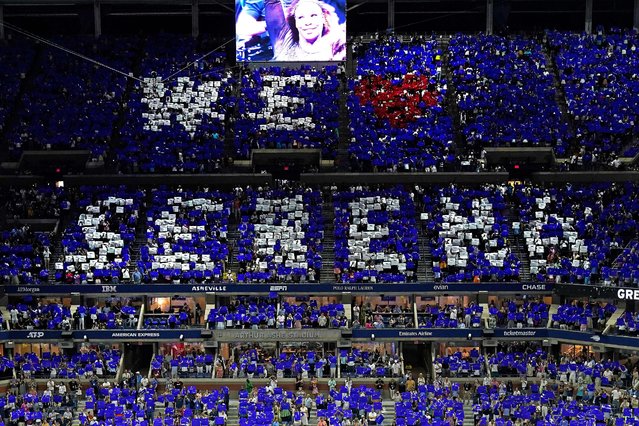 People hold up signs reading “We love you Serena” during a ceremony following the 2022 US Open Tennis tournament women's singles first round match between US player Serena Williams and Montenegro's Danka Kovinic at the USTA Billie Jean King National Tennis Center in New York, on August 29, 2022. Serena Williams was set to take center stage as the US Open got under way on August 29, 2022 with the 23-time Grand Slam winner preparing to bid an emotional farewell to tennis. (Photo by Timothy A. Clary/AFP Photo) 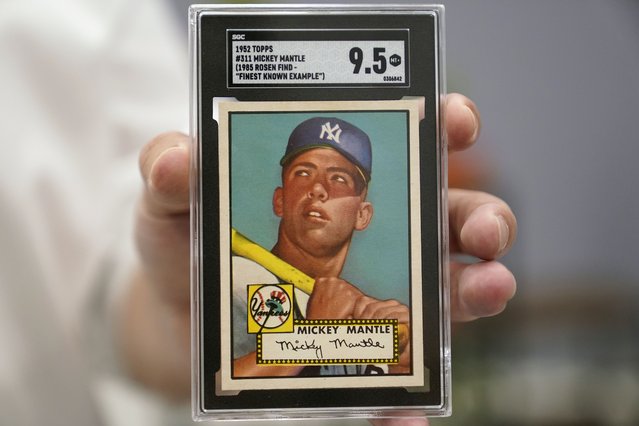 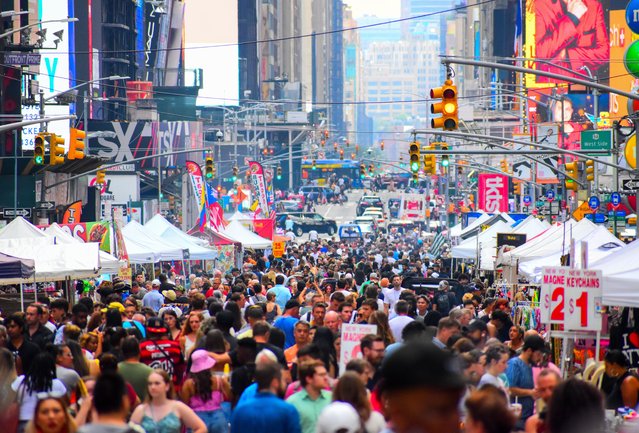 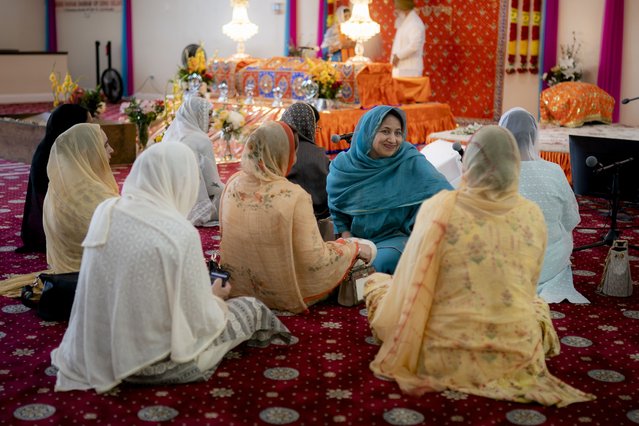 The faithful pray before the thakt, or throne, where the Guru Granth Sahib, the Sikh holy book, resides during prayer hours at the Guru Nanak Darbar of Long Island, a Sikh gurdwara, Wednesday, August 24, 2022, in Hicksville, N.Y. An Afghan Sikh family of 13 has found refuge in the diaspora community on Long Island where the Sikh community is helping family members obtain work permits, housing, healthcare and find schools for the children. (Photo by John Minchillo/AP Photo) 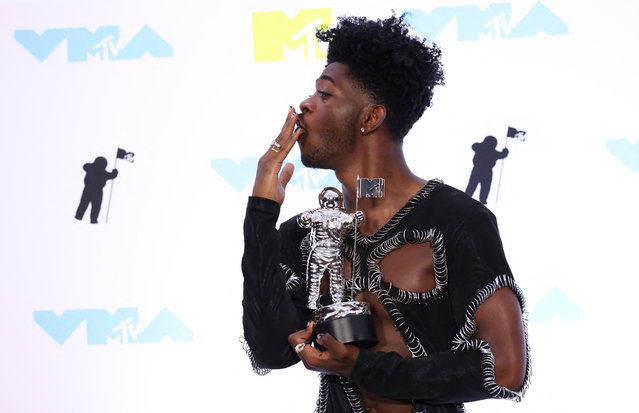 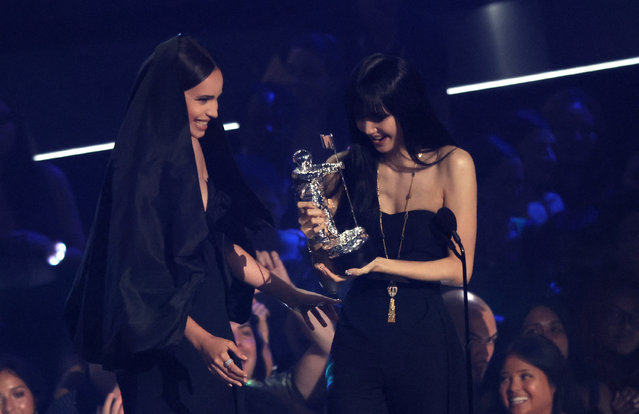 Lisa accepts the award for Best K-pop for "Lalisa" from presenter Sofia Carson at the 2022 MTV Video Music Awards at the Prudential Center in Newark, New Jersey, U.S., August 28, 2022. (Photo by Brendan McDermid/Reuters) 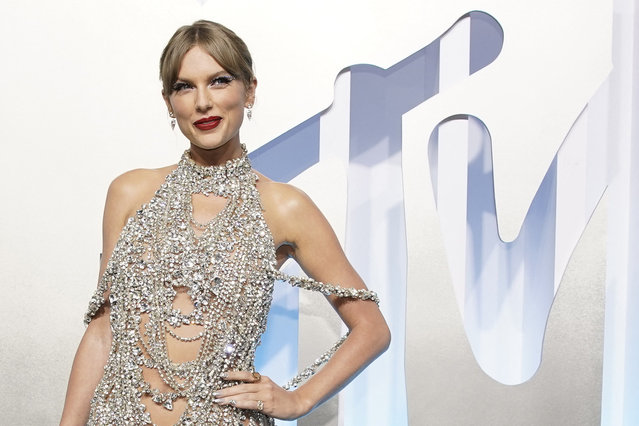 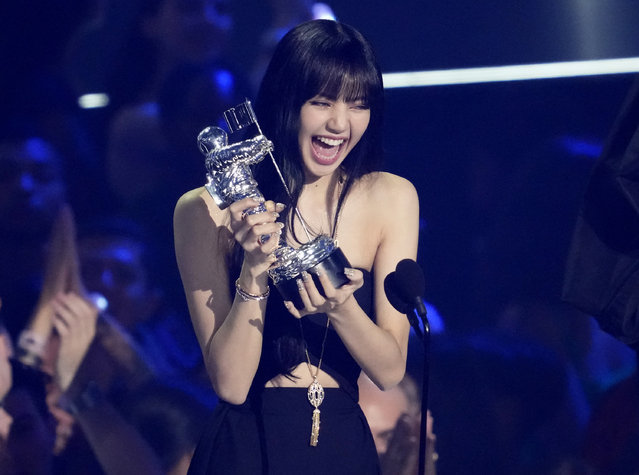 Lisa accept the award for best K-Pop for “Lalisa” at the MTV Video Music Awards at the Prudential Center on Sunday, August 28, 2022, in Newark, N.J. Lisa is a Thai rapper based in South Korea. (Photo by Charles Sykes/Invision/AP Photo) 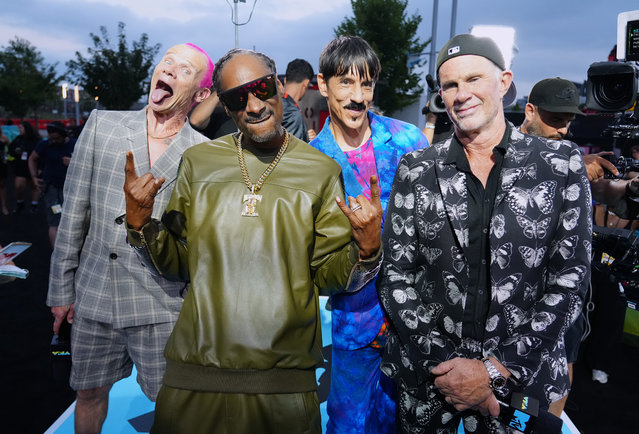 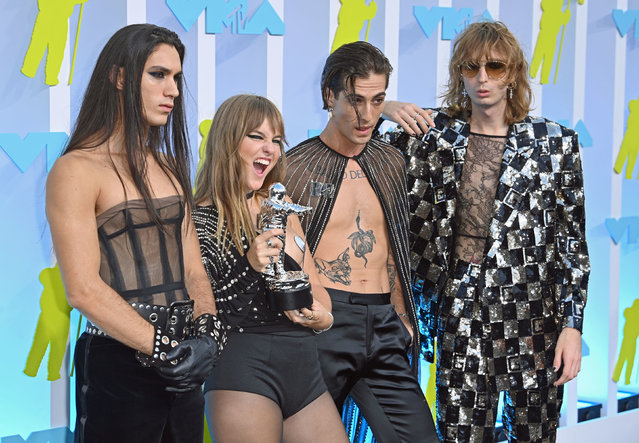 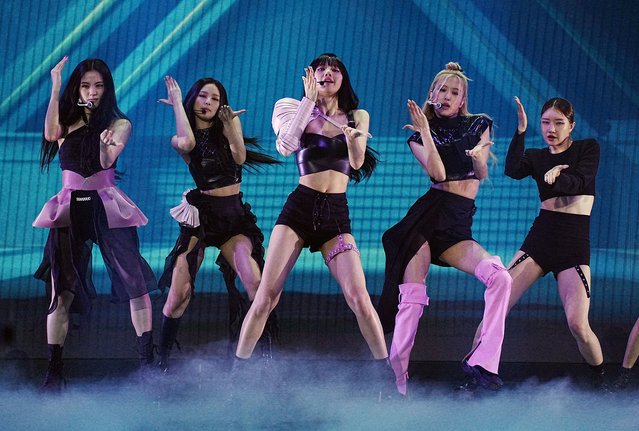 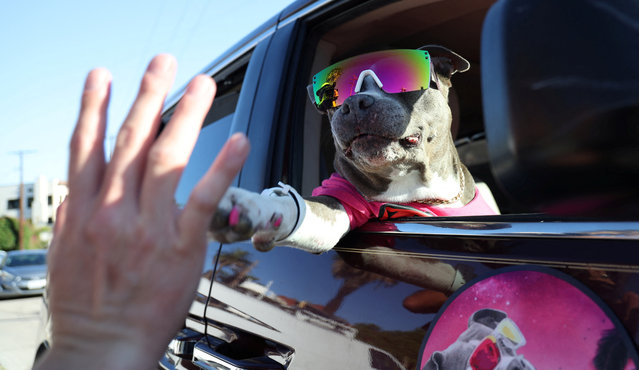 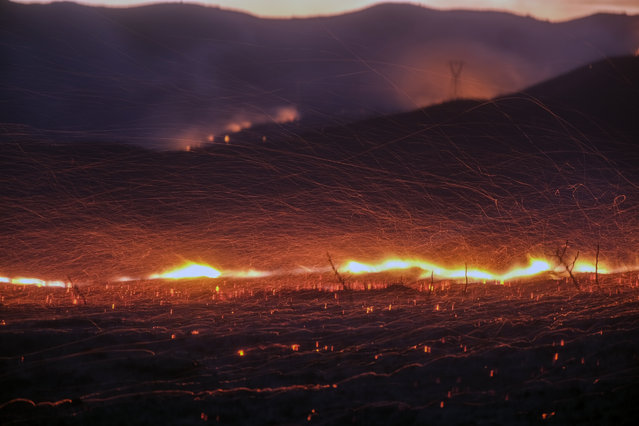 Wind whips embers from a hotspot during a wildfire in Castaic, Calif. on Wednesday, August 31, 2022. (Photo by Ringo H.W. Chiu/AP Photo) 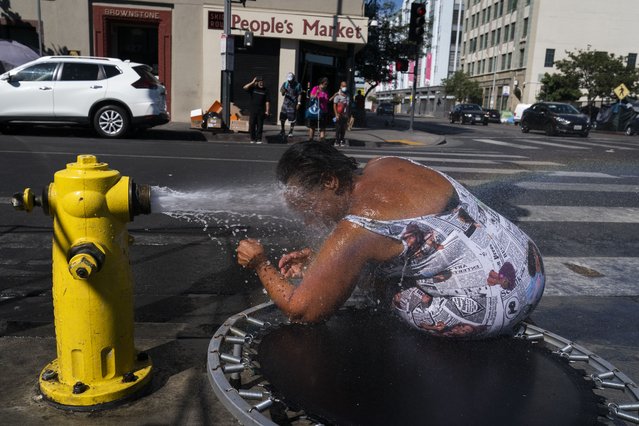 Stephanie Williams, 60, cools off with water from a hydrant in the Skid Row area of Los Angeles, Wednesday, August 31, 2022. Excessive-heat warnings expanded to all of Southern California and northward into the Central Valley on Wednesday, and were predicted to spread into Northern California later in the week. (Photo by Jae C. Hong/AP Photo)
Edit Del
07 Sep 2022 05:20:00, post received 0 comments
Publication archive:
←   →
Popular tags:
All tags
Last searches: