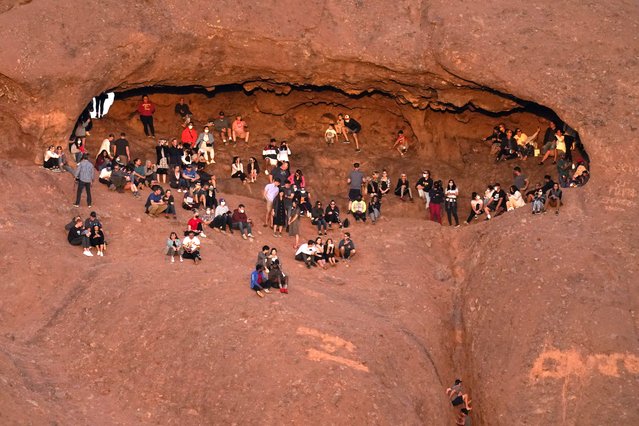 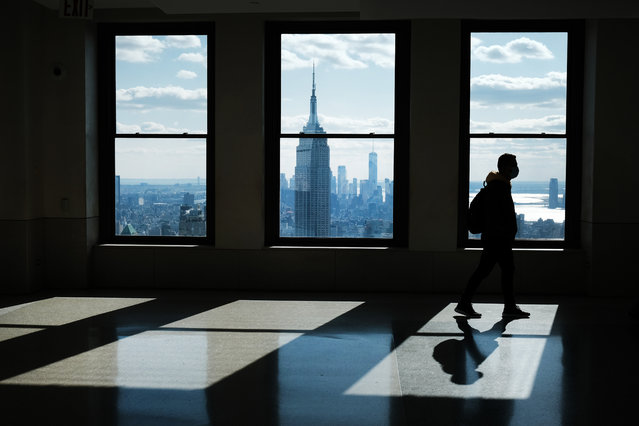 People enjoy the view from the top of Rockefeller Center as office buildings stand largely empty on March 04, 2021 in New York City. According to Colliers International, in January the office available rate in Manhattan rose to 14.9%, which is the highest level on record dating back to 2000. Some companies are slowly asking employees to return to the office while other's are waiting for more New Yorkers to receive the vaccine for Covid-19. (Photo by Spencer Platt/Getty Images) 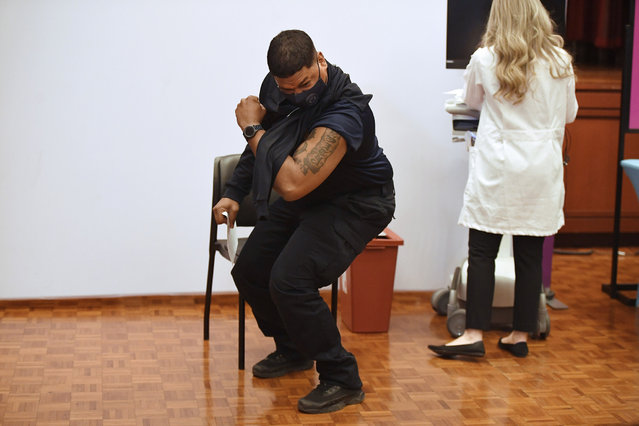 Hartford Public Schools Safety Officer Victor Rodriguez flexes his arm muscle after receiving a Johnson & Johnson COVID-19 at Hartford Hospital in Hartford, Conn., Wednesday, March 3, 2021. The first shipments of the vaccine arrived at the hospital this morning. Cities and states are rapidly expanding access to vaccines as the nation races to head off a resurgence in coronavirus infections and reopen schools and businesses battered by the pandemic. (Photo by Jessica Hill/AP Photo) 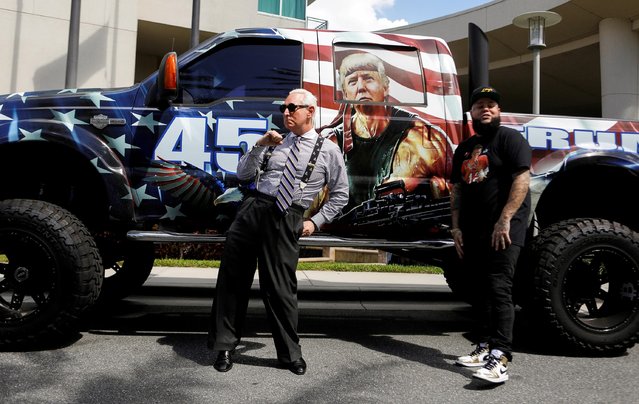 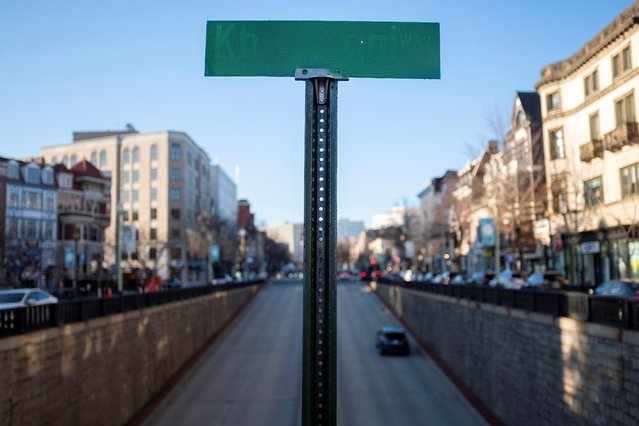 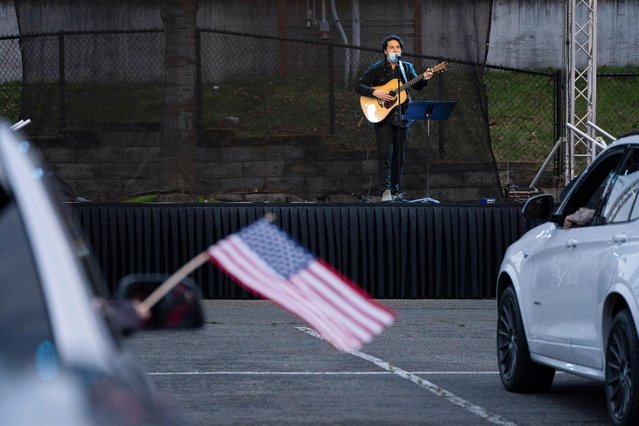 A musician performs during a drive-in coronavirus disease (COVID-19) Victims and Survivors Memorial Day vigil in a parking lot of the Tacoma Dome in Tacoma, Washington, U.S. March 1, 2021. (Photo by David Ryder/Reuters) 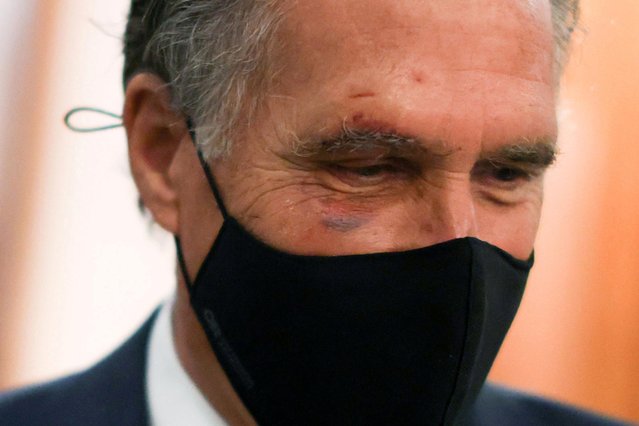 U.S. Senator Mitt Romney (R-UT) sports a bit of a black eye and small facial cuts from a fall over the weekend as he speaks with reporters about potential efforts to raise the minimum wage at the U.S. Capitol in Washington, U.S. March 1, 2021. (Photo by Jonathan Ernst/Reuters) 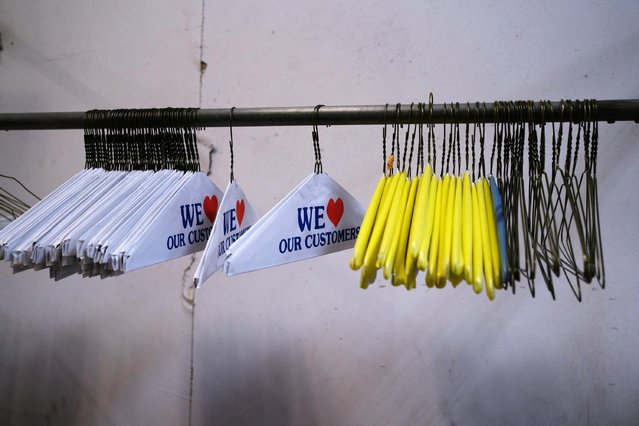 Empty hangers hang at a dry cleaners, as businesses struggle with continued work from home protocols to limit the spread of the coronavirus disease (COVID-19), in Philadelphia, Pennsylvania, U.S., March 2, 2021. (Photo by Caroline Gutman/Reuters) 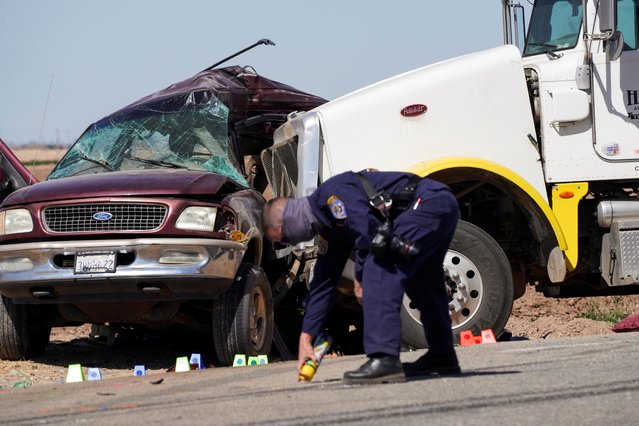 The scene of a collision between a sport utility vehicle (SUV) and a tractor-trailer truck is seen near Holtville, California, U.S., March 2, 2021. At least 13 people, 10 of them Mexican nationals, were killed on Tuesday when a tractor-trailer slammed into an SUV crammed with 25 adults and children on a dusty Southern Californian road near the U.S.-Mexico border, officials said. (Photo by Bing Guan/Reuters) 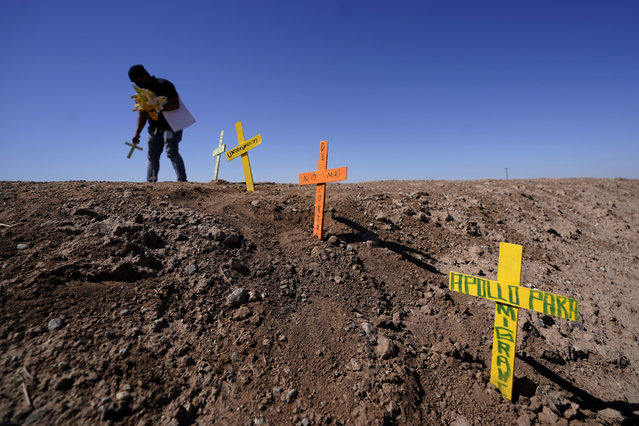 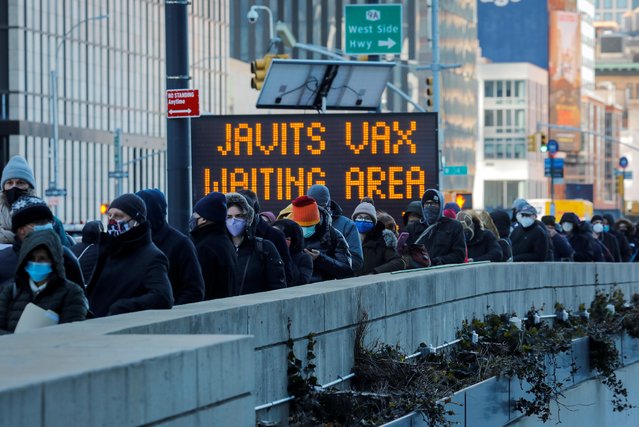 People wait in a line stretching around the Jacob K. Javits Convention Center on midtown Manhattan's west side, to receive a coronavirus vaccine at the site, which has been converted into a mass vaccination center in New York City, New York, March 2, 2021. (Photo by Mike Segar/Reuters) 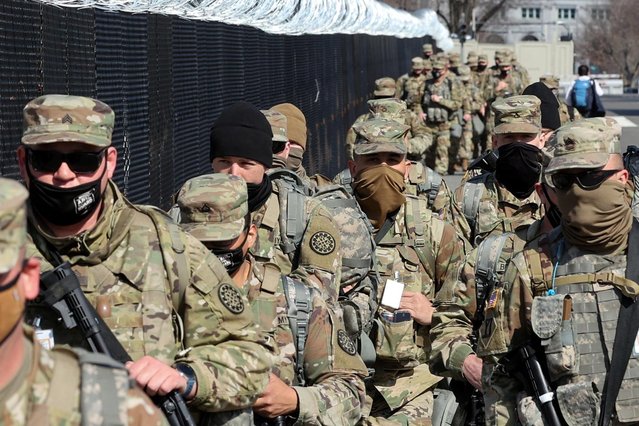 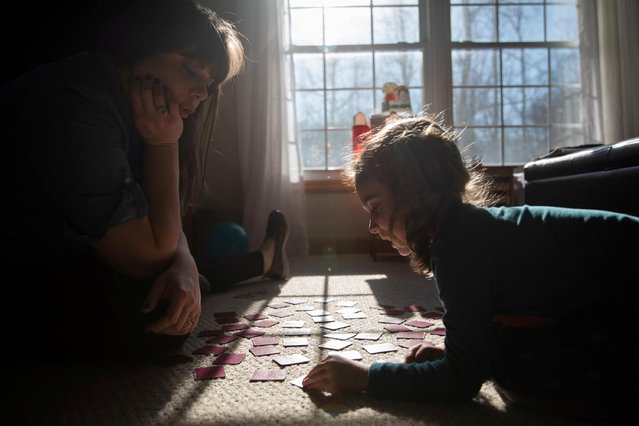 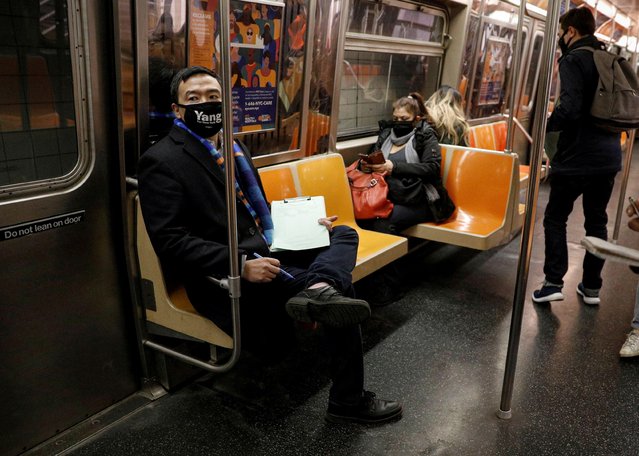 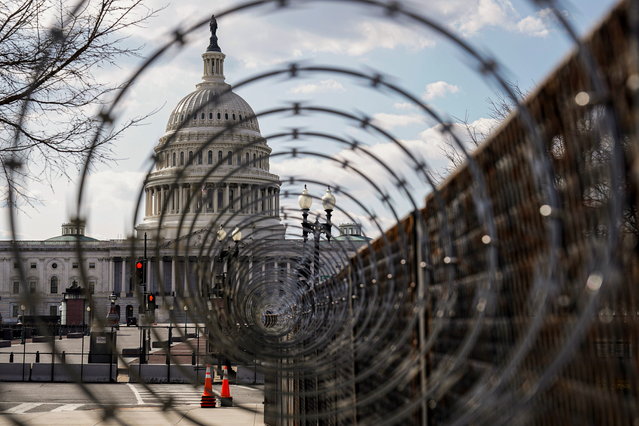 The U.S. Capitol is seen through razor wire after police warned that a militia group might try to attack the U.S. Capitol in Washington, U.S., March 4, 2021. (Photo by Joshua Roberts/Reuters) 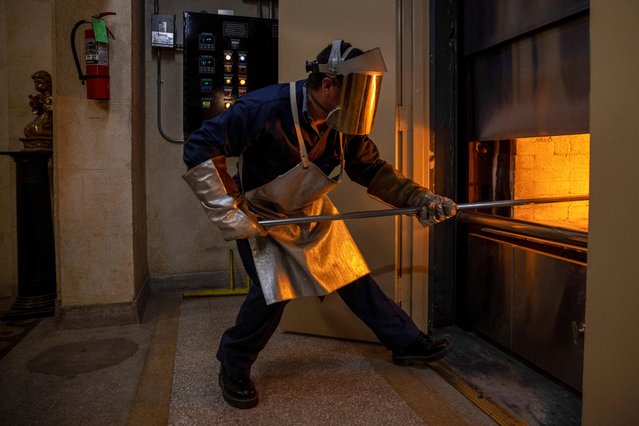 A worker adjusts remains at the Hollywood Forever crematorium as it struggles to keep up with demand during the coronavirus outbreak in Los Angeles, California, March 3, 2021. Cremations at the facility tripled to about 60 in January from the year-ago total. In mid-January, the South Coast Air Quality Management District lifted air quality regulations that limited the number of cremations to protect public health. (Photo by Mike Blake/Reuters) 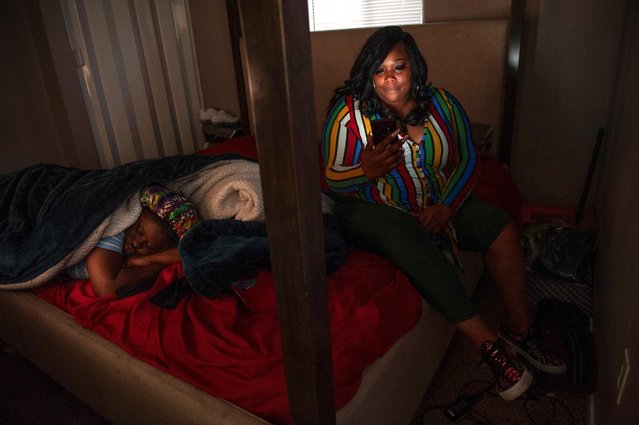 Jennifer Cattenhead uses a cellphone as she relaxes for a moment after working with her daughter, Jamya Atkins at home in Jackson, Mississippi, March 4, 2021. Cattenhead had driven miles to find stores with jugs of water in stock, and she melted ice to use for flushing toilets. The first week after the storm, her house also had no power or heat, forcing her family to sleep in their cars for warmth. (Photo by Rory Doyle/Reuters) 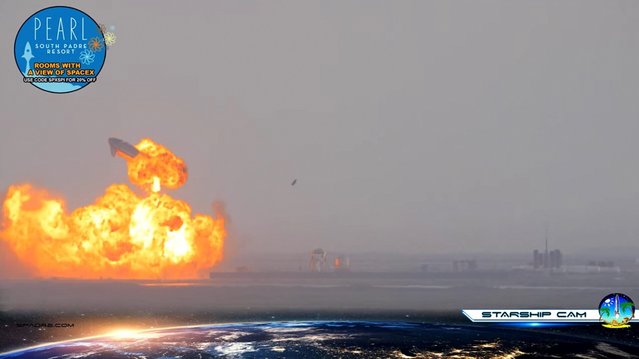 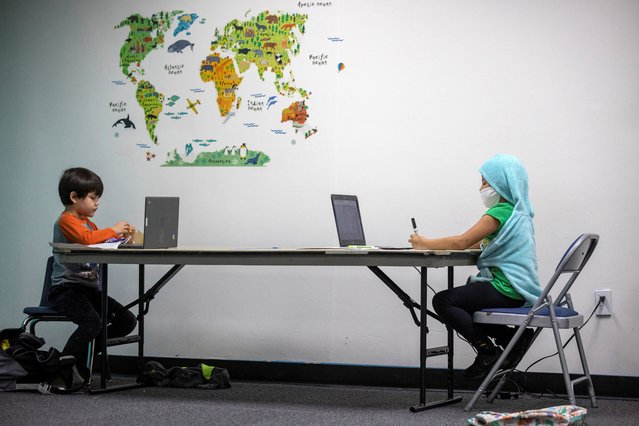 Alondra and Hendi, both six-years-old, take their zoom class as the Westchester Family YMCA provides a safe distance learning environment for local students during the outbreak of the coronavirus disease (COVID-19) in Los Angeles, California, U.S., March 2, 2021. (Photo by Mike Blake/Reuters) 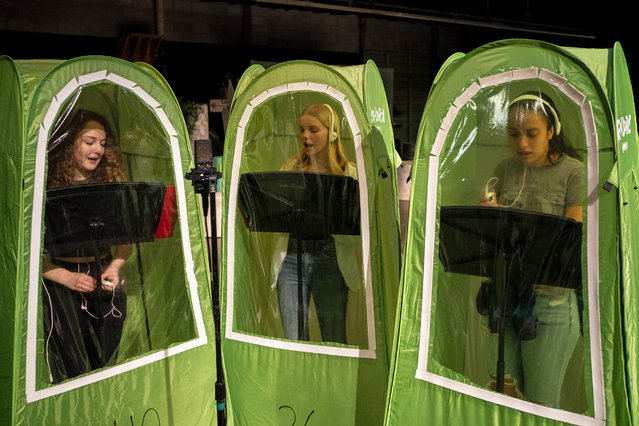 (L-R) Emma Banker, Jessi McIrvin, and Valerie Sanchez record vocals in pop-up tents during choir class at Wenatchee High School on February 26, 2021 in Wenatchee, Washington. The school has been using pop-up tents as COVID-19 enclosures for its music programs as students return to classrooms. (Photo by David Ryder/Getty Images) 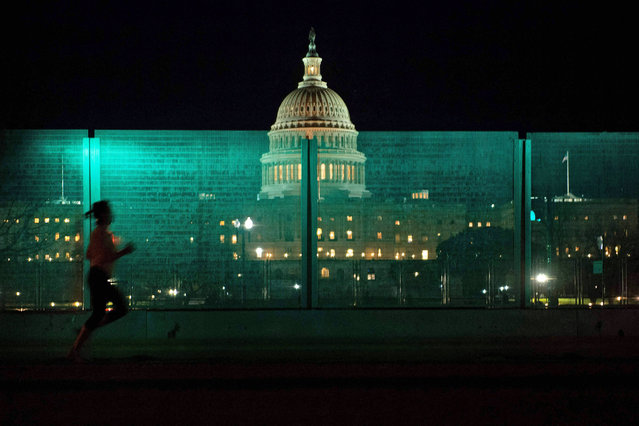 A view of a security fence at the base of Capitol Hill during heightened security concerns over possible protests or violence tomorrow March 3, 2021, in Washington, DC. Washington's security posture has been bolstered after threats of a possible March 4, 2021, “breach” of the US Capitol, with the House of Representatives changing its voting plans to avoid gathering members on a day of potential unrest. (Photo by Brendan Smialowski/AFP Photo) 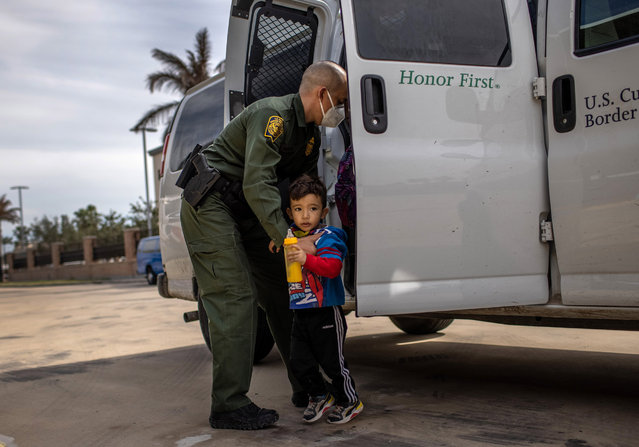 A U.S. Border Patrol agent delivers a young asylum seeker and his family to a bus station on February 26, 2021 in Brownsville, Texas. U.S. immigration authorities are now releasing many asylum seeking families after detaining them while crossing the U.S.-Mexico border. The immigrant families are then free to travel to destinations throughout the U.S. while awaiting asylum hearings. (Photo by John Moore/Getty Images) 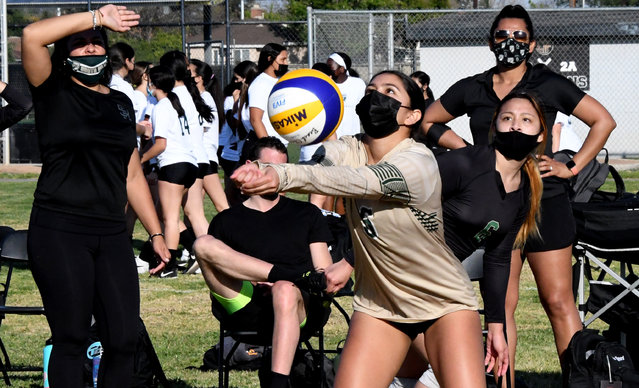 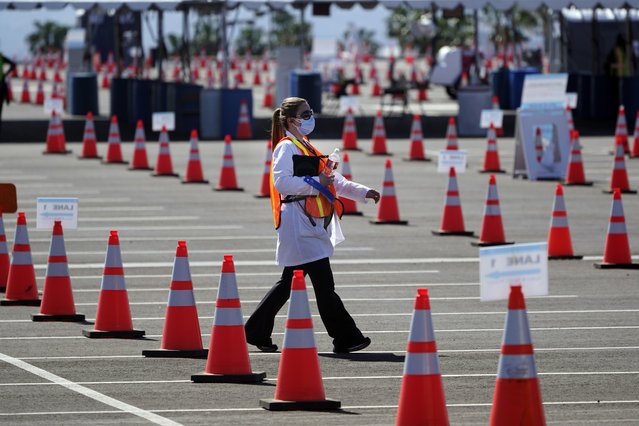 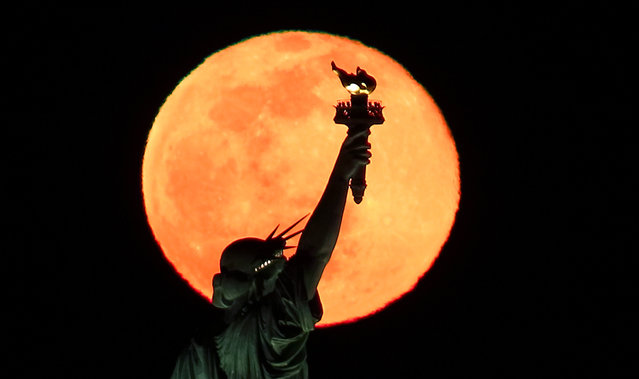