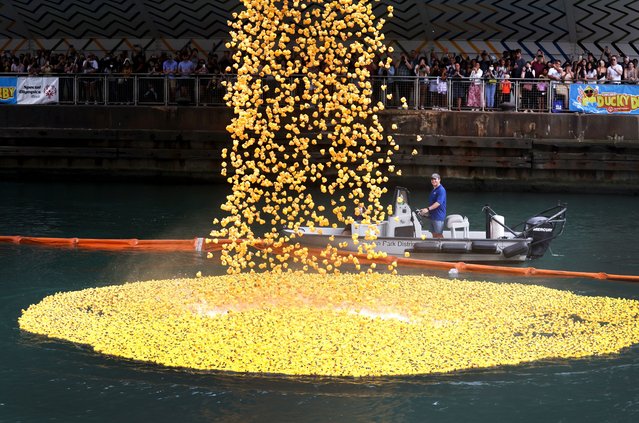 Seventy-five thousand rubber ducks are dumped into the Chicago River during the Chicago Ducky Derby on August 04, 2022 in Chicago, Illinois. The ducks are dumped into the river as part of a fundraising event for Special Olympics Illinois. The individual ducks, which are adopted by supporters for $5 each, race to a nearby location with prizes and cash being awarded to holders of the winning ducks. (Photo by Scott Olson/Getty Images) 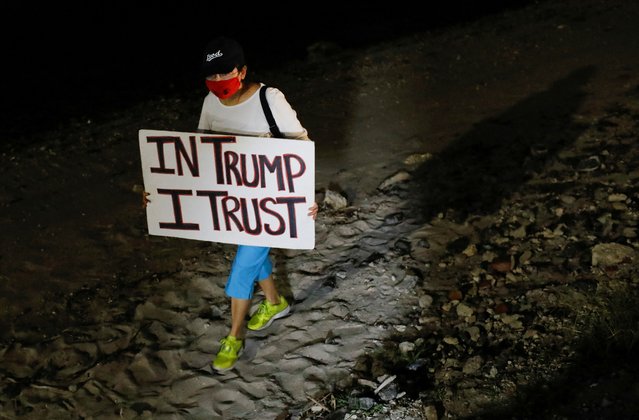 A person holds a sign as supporters of former U.S. President Donald Trump stand outside his Mar-a-Lago home after Trump said that FBI agents raided it, in Palm Beach, Florida, U.S., August 8, 2022. (Photo by Marco Bello/Reuters) 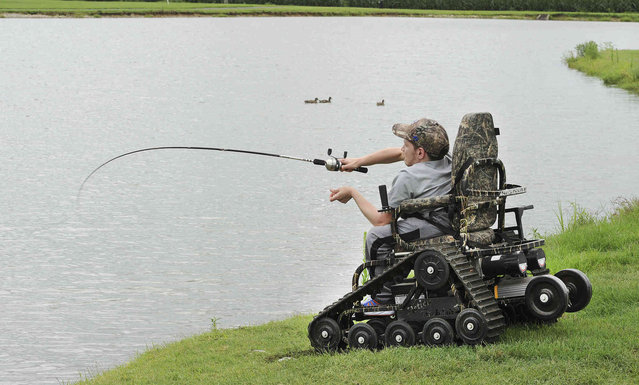 Brian Sosh casts as he tries his luck for the first time fishing for bass, Friday, August 5, 2022, at the lake at Waymond Morris Park in Owensboro, Ky. (Photo by Alan Warren/The Messenger-Inquirer via AP Photo) 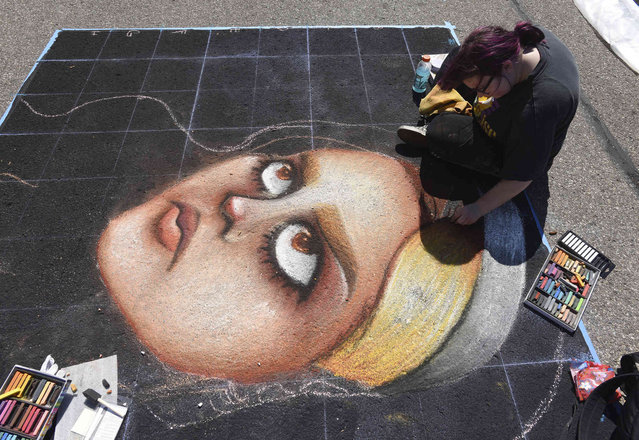 Jasmine Pilkinton, of Fort Wayne, Ind., works on a mural Saturday, August 6, 2022, during the annual Chalk the Block in downtown St. Joseph, Mich. (Photo by Don Campbell/The Herald-Palladium via AP) 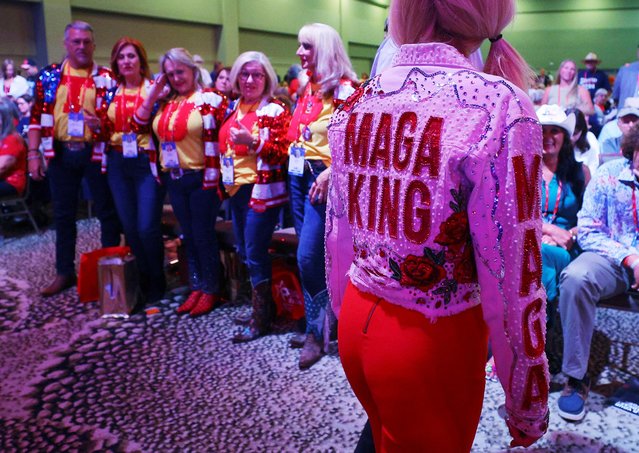 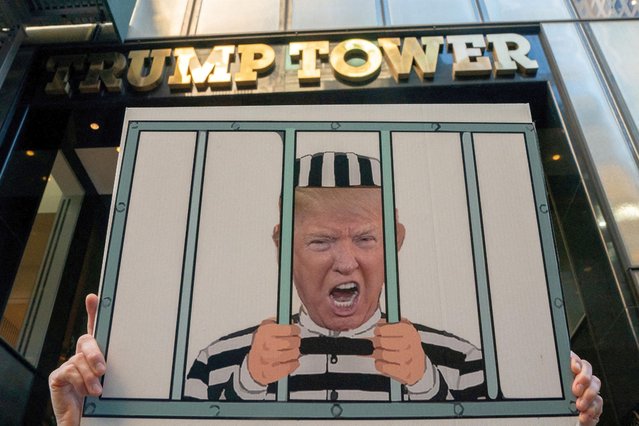 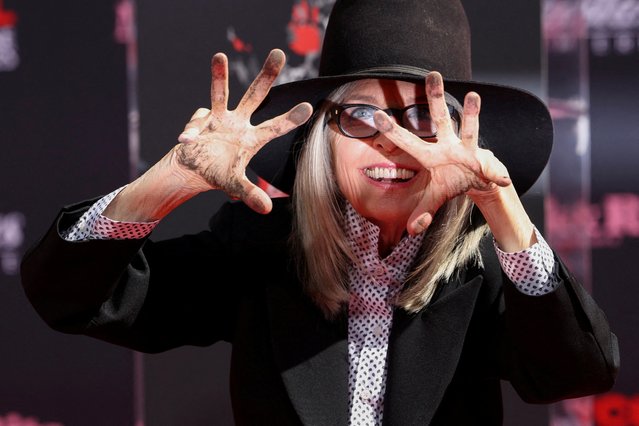 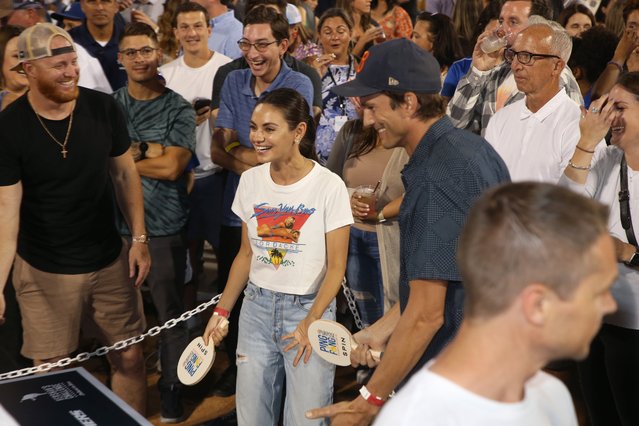 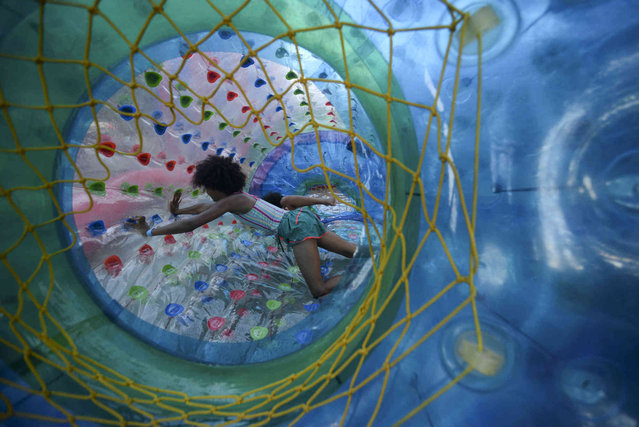 Jayla Kennett, 11, from Bellows Falls, rolls around in an inflatable floating ball at the Waypoint Center during the 45th annual Rockingham Old Home Days on Saturday, August 6, 2022 in Bellows Falls, Vt. (Photo by Kristopher Radder/The Brattleboro Reformer via AP Photo) 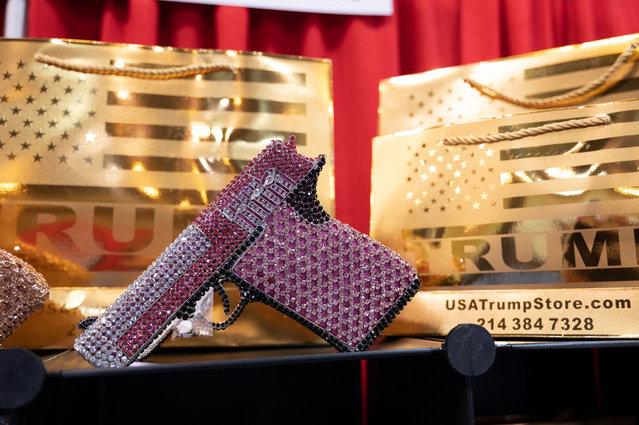 A diamante gun offered for sale by USATumpStore sit on display at the Conservative Political Action Conference (CPAC) in Dallas on August 5, 2022. (Photo by Zach D. Roberts/NurPhoto/Rex Features/Shutterstock) 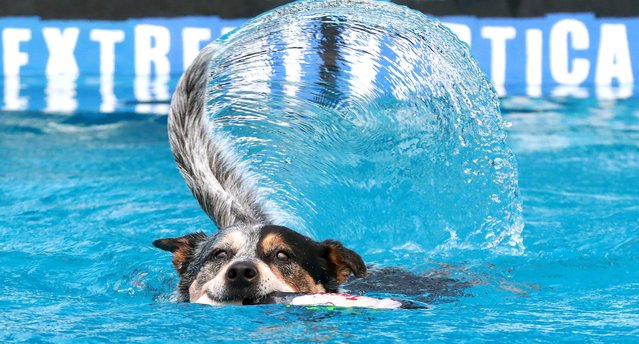 A dock dog wags their tail after grabbing a retrieving toy as Carolina DockDogs showcased talented canines during a competition at the NC Pet Expo in Raleigh, N.C. on August 6, 2022. (Photo by Bob Karp/Zuma Press, Inc./Alamy Live News) 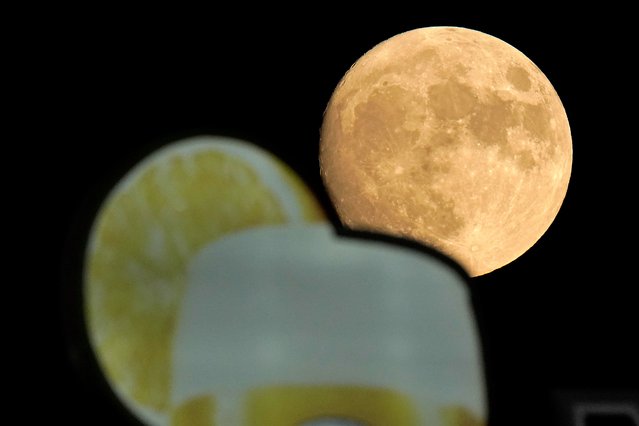 The moon rises beyond a sign in the outfield during the fifth inning of a baseball game between the Kansas City Royals and the Chicago White Sox Wednesday, Aug. 10, 2022, in Kansas City, Mo. (Photo by Charlie Riedel/AP Photo) 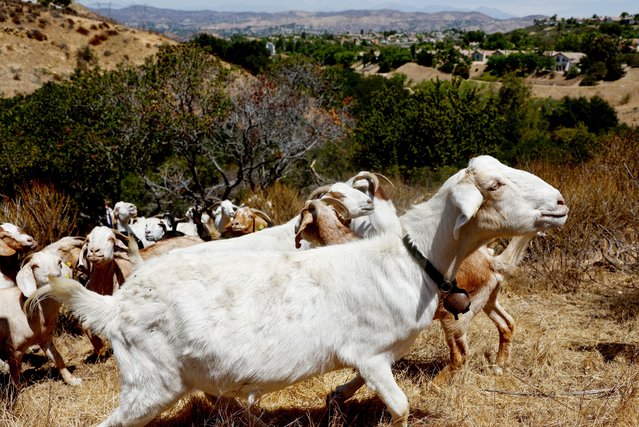 A herd of goats graze on drought-stressed land as part of city wildfire prevention efforts on August 9, 2022 in Anaheim, California. The environmentally friendly tactic reduces the potential for wildfires with goats consuming combustible dry grass and brush, along with non-native plants, in fire-prone areas. Nearly three-quarters of the state of California is in extreme or exceptional drought, amid a climate change-fueled megadrought in the Southwestern United States. (Photo by Mario Tama/Getty Images) 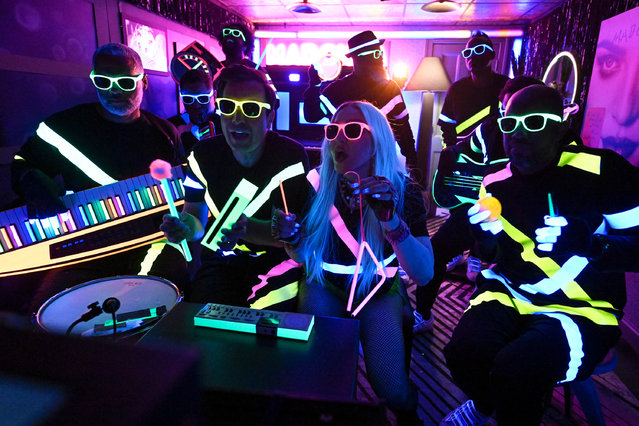 Host Jimmy Fallon, singer Madonna and The Roots all go UV during Classroom Instruments on the Tonight Show in New York on August 10, 2022. (Photo by Todd Owyoung/NBC via Getty Images) 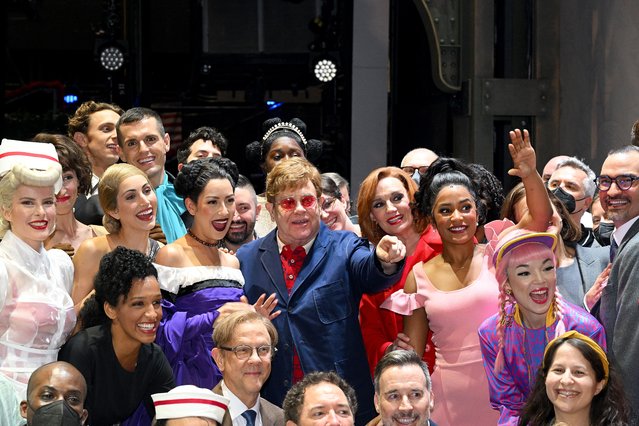 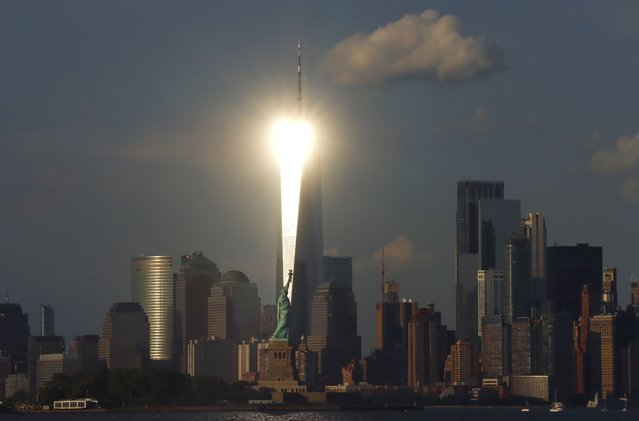 The setting sun reflects off the windows of One World Trade Center behind the Statue of Liberty in New York City on August 7, 2022, as seen from Jersey City, New Jersey. (Photo by Gary Hershorn/Getty Images) 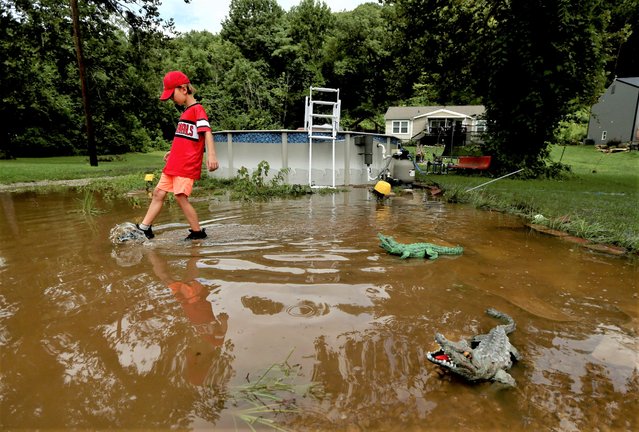 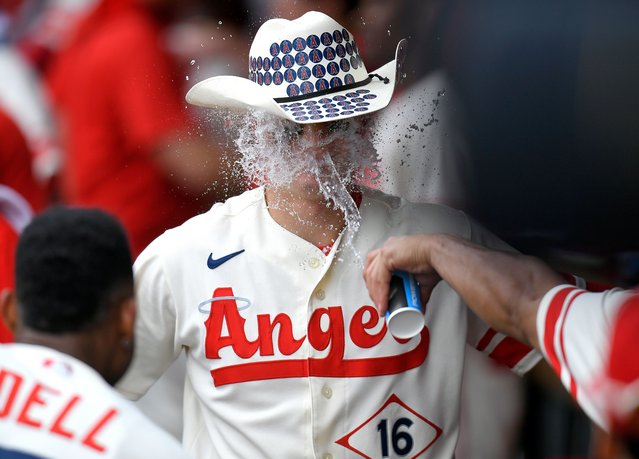 Mickey Moniak #16 of the Los Angeles Angels is congratulated for his home run with a cowboy hat and cup of water to the face in the ninth inning against the Oakland Athletics at Angel Stadium of Anaheim on August 4, 2022 in Anaheim, California. (Photo by John McCoy/Getty Images) 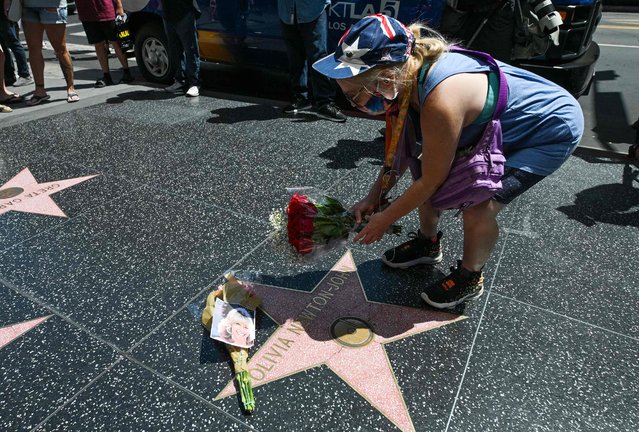 A woman places flowers on the star of Australian singer and actress Olivia Newton-John on the Hollywood Walk of Fame in Hollywood, California, on August 8, 2022. Australian singer Olivia Newton-John, who gained worldwide fame as high-school sweetheart Sandy in the hit musical movie “Grease”, died on August 8, 2022, her family said. She was 73. The entertainer, whose career spanned more than five decades, devoted much of her time and celebrity to charities after being diagnosed with breast cancer in 1992. (Photo by Robyn Beck/AFP Photo) 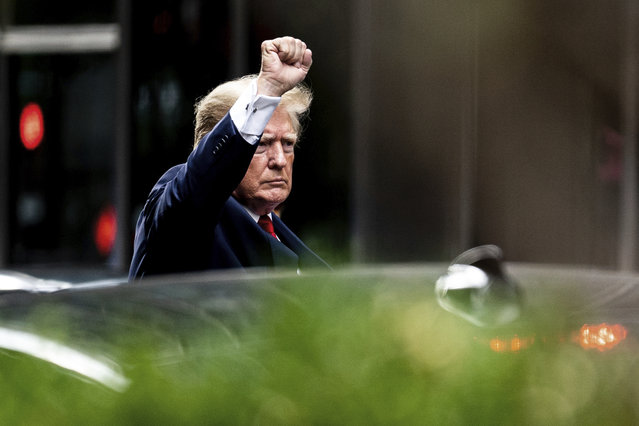