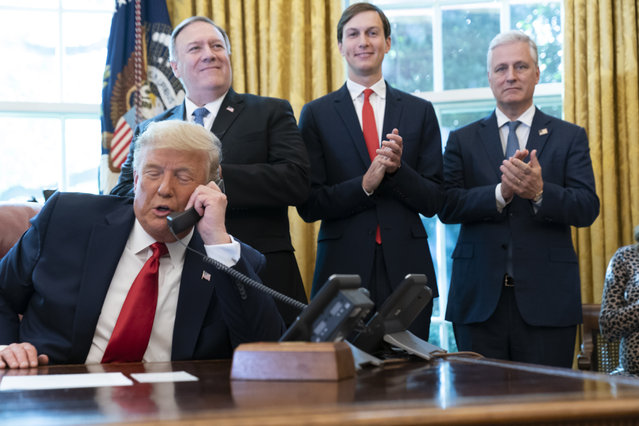 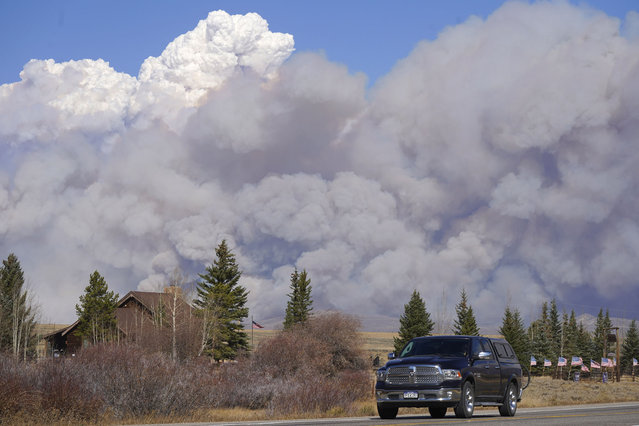 Smoke rises from mountain ridges as a motorist heads eastbound on Highway 34 while a wildfire burns Thursday, October 22, 2020, near Granby, Colo. (Photo by David Zalubowski/AP Photo) 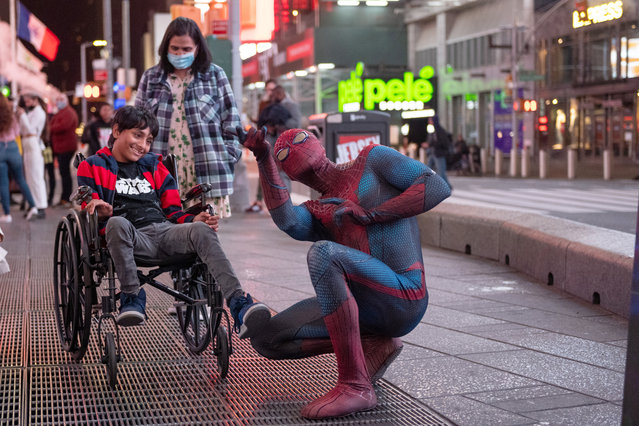 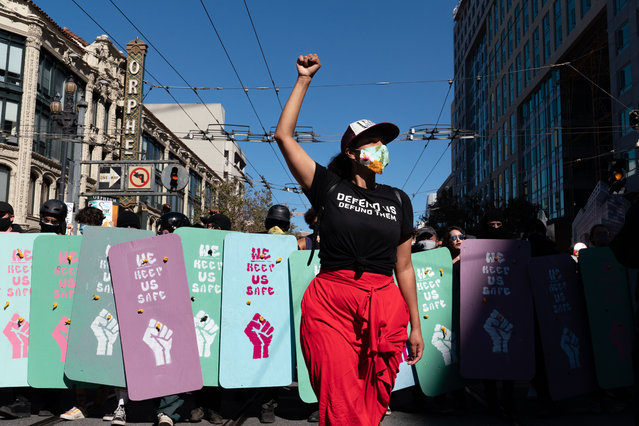 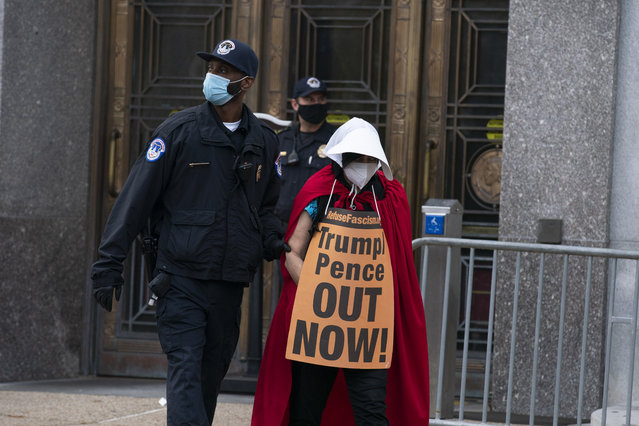 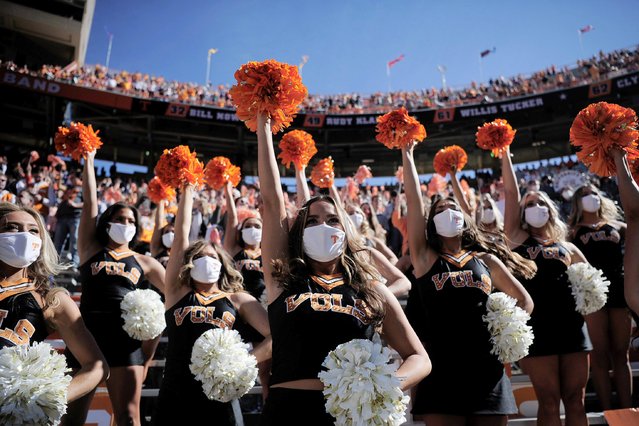 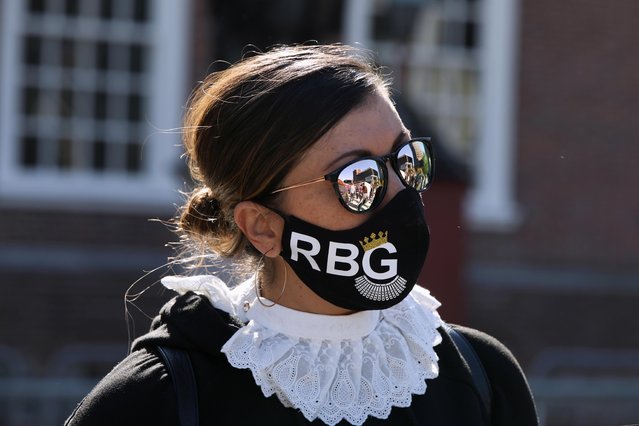 Andrea Towson takes part in a Women's March as part of a nationwide protest against President Donald Trump's decision to fill the seat on the Supreme Court left by the late Justice Ruth Bader Ginsburg before the election, in Philadelphia, Pennsylvania, U.S. October 17, 2020. (Photo by Rosem Morton/Reuters) 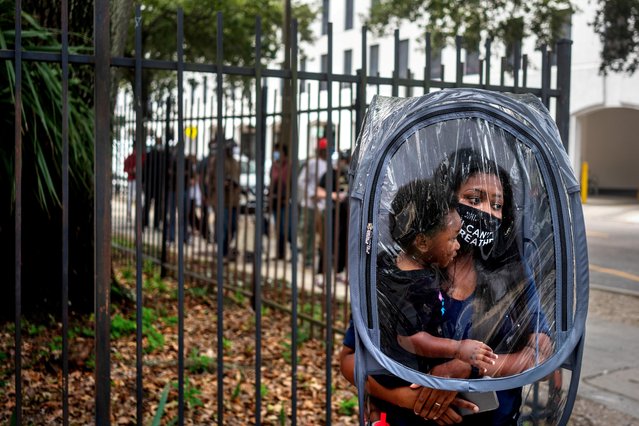 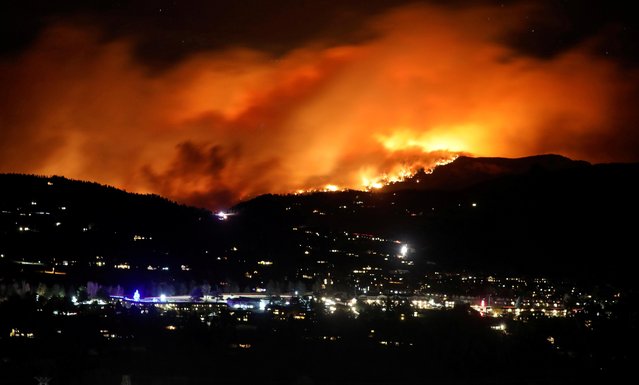 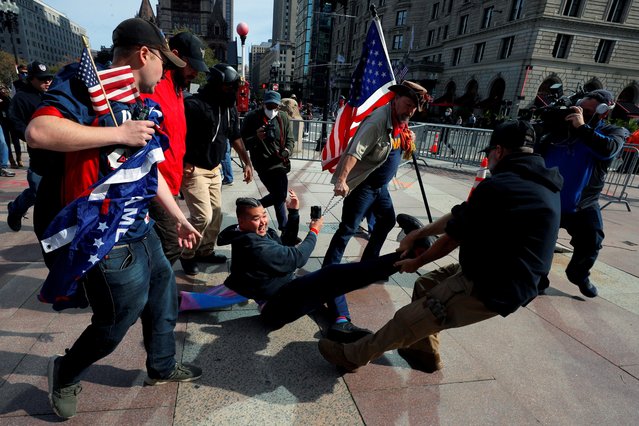 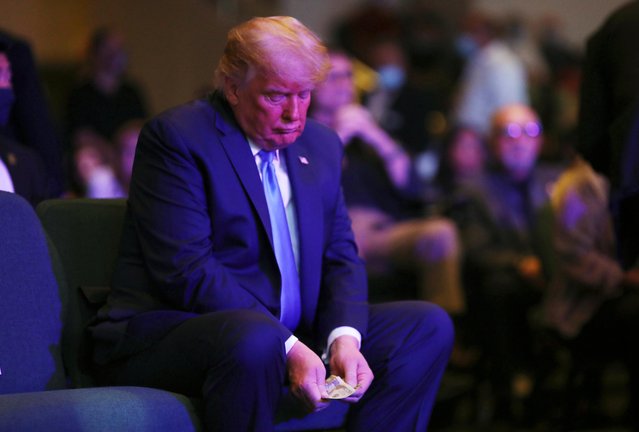 President Donald Trump counts money before donating it as he attends a service at the International Church of Las Vegas in Las Vegas, Nevada, October 18, 2020. (Photo by Carlos Barria/Reuters) 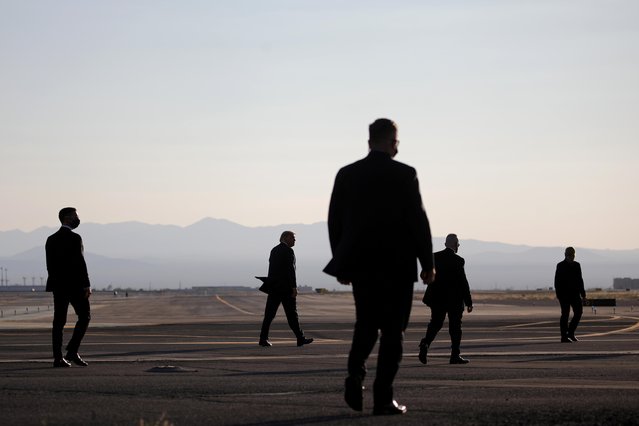 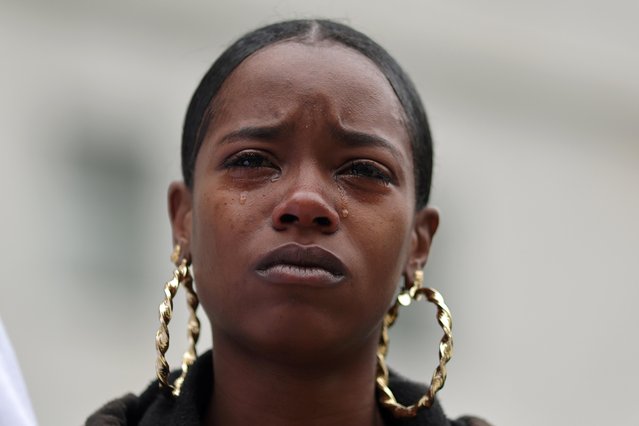 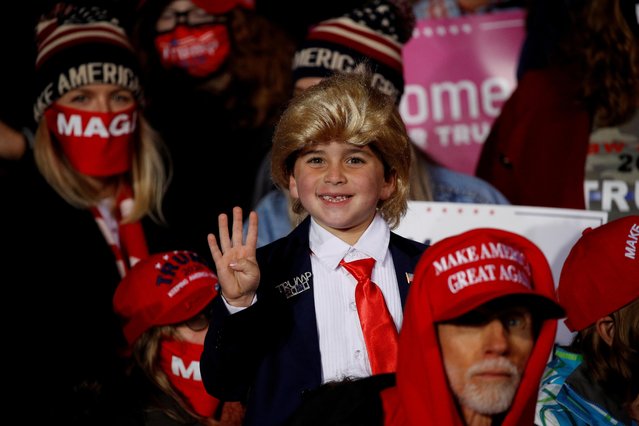 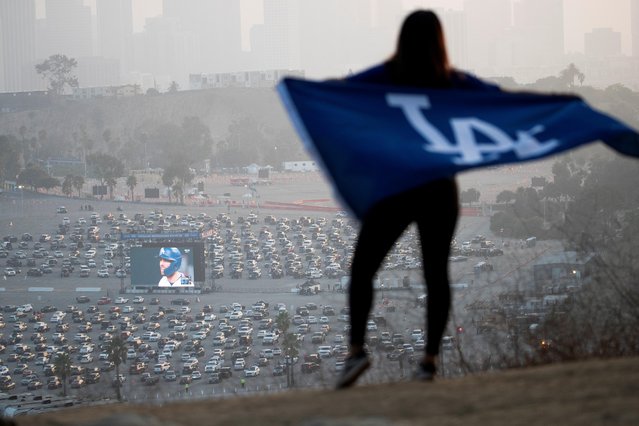 A person holds a flag while watching a drive-in viewing of Los Angeles Dodgers against the Tampa Bay Rays during game 1 of the 2020 World Series in the parking lots of Dodgers Stadium as seen from Angels Point during the outbreak of the coronavirus disease (COVID-19), in Los Angeles, California, U.S., October 20, 2020. (Photo by Mario Anzuoni/Reuters) 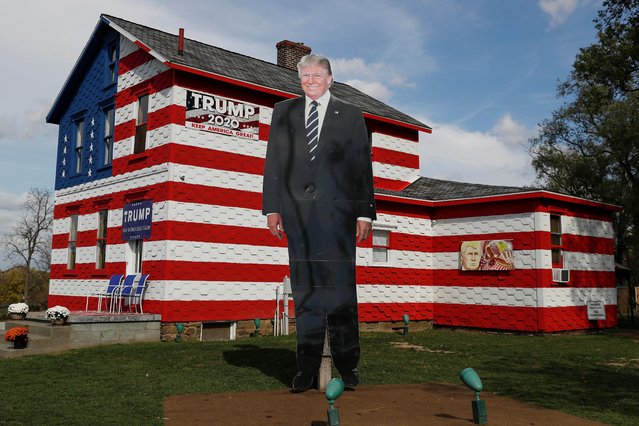 A 14-foot cutout of President Donald Trump stands on the front lawn of the self-proclaimed “Trump House” in Youngstown in the battleground state of Pennsylvania, October 21, 2020. (Photo by Shannon Stapleton/Reuters) 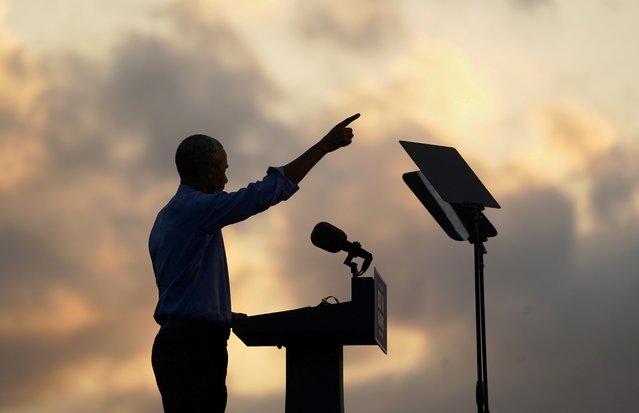 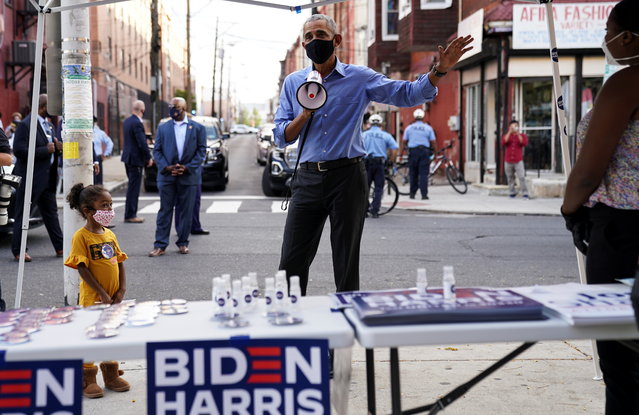 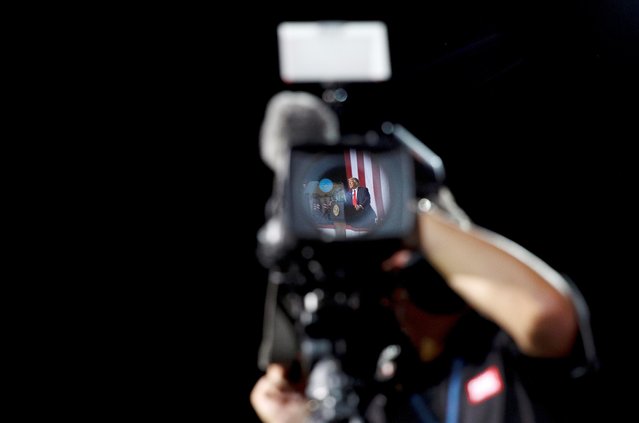 U.S. President Donald Trump is reflected in the lens of a video camera during his campaign rally in Gastonia, North Carolina, U.S., October 21, 2020. (Photo by Tom Brenner/Reuters) 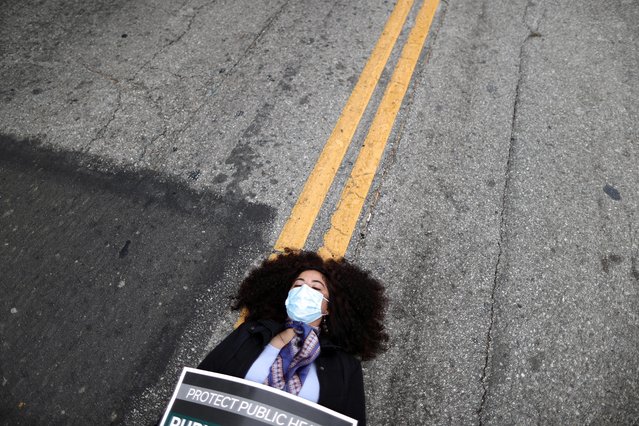 A woman lies in the road outside the LA Board of Supervisors during a die-in protest and memorial service honoring the over 6,800 people from LA who died from the coronavirus disease (COVID-19), in Los Angeles, California, U.S., October 21, 2020. (Photo by Lucy Nicholson/Reuters) 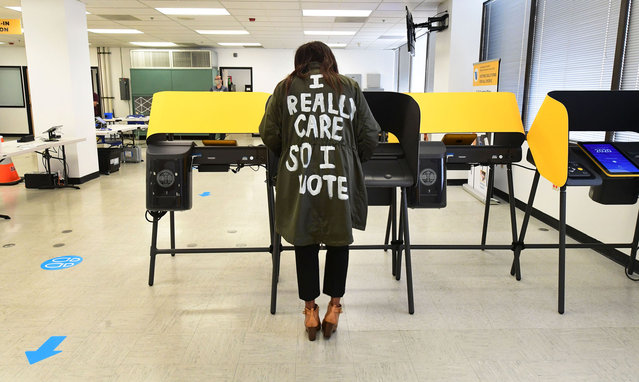 Wearing a coat reading “I Really Care So I Vote” written on the back, Tonya Swain votes in the 2020 US elections at the Los Angeles County Registrar in Norwalk, California on October 19, 2020. The coat is a reference to one worn by US First Lady Melania Trump which read “I Really Don't Care Do You?”. Voter turnout is ten times higher than in 2016 in California according the Secretary of State Alex Padilla as over 600,000 Los Angeles County ballots are already at the county registrar. (Photo by Frederic J. Brown/AFP Photo) 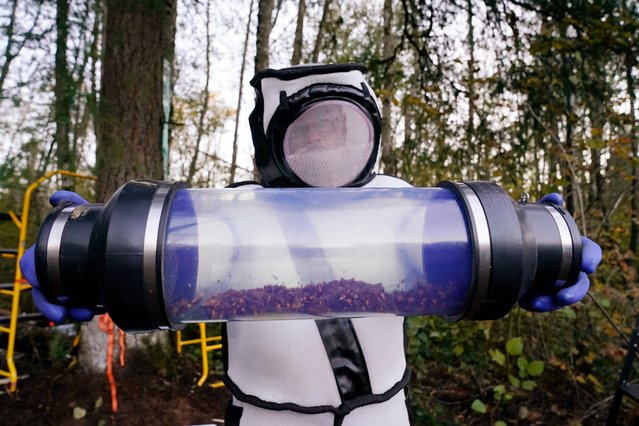 Sven Spichiger, Washington State Department of Agriculture managing entomologist, displays a canister of Asian giant hornets vacuumed from a nest in a tree behind him on October 24, 2020, in Blaine, Washington. Scientists in Washington state discovered the first nest earlier in the week of so-called murder hornets in the United States and worked to wipe it out Saturday morning to protect native honeybees. (Photo by Elaine Thompson/AFP Photo) First lady Melania Trump arrives prior to the start of the final debate between her husband President Donald Trump and Democratic presidential nominee Joe Biden at Belmont University on October 22, 2020 in Nashville, Tennessee. This is the last debate between the two candidates before the November 3 election. (Photo by Jim Bourg-Pool/Getty Images) 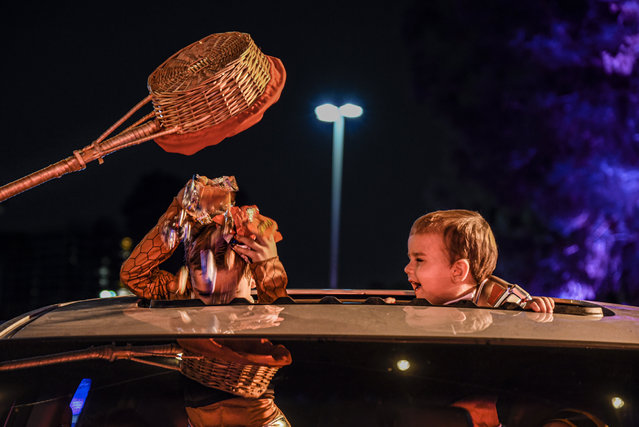 A Haunt O'ween staff pours candy treats to a child using a basket with a long wooden handle to maintain social distancing at Haunt O'ween in Woodland Hills, Calif., on October 15, 2020. (Photo by Kevin Lendio for NBC News) 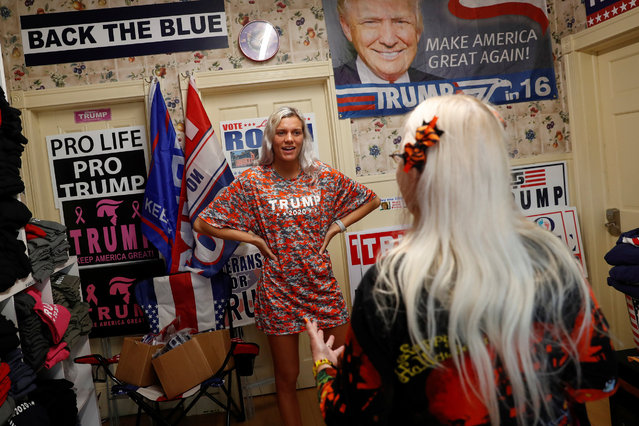