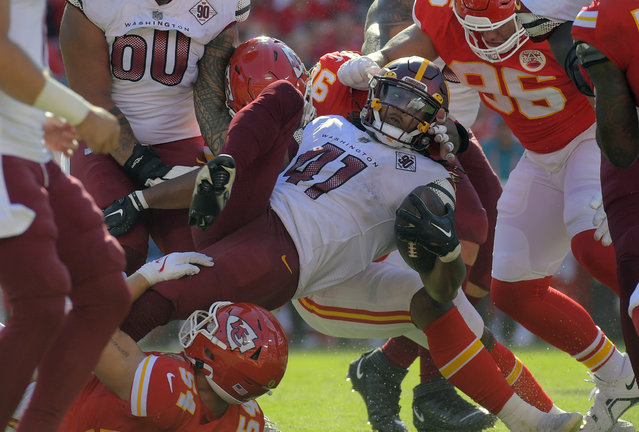 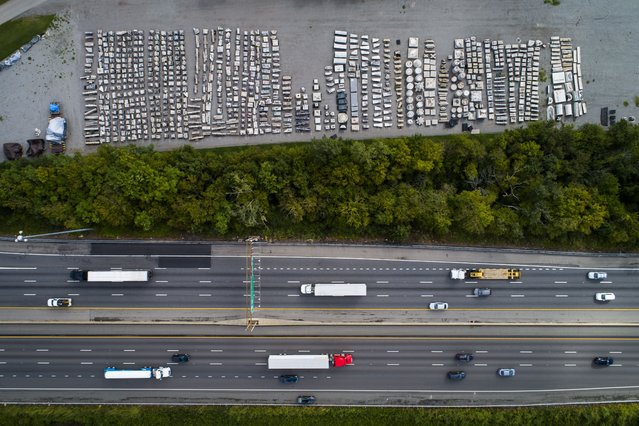 An image made with a drone shows the remains of the 40-foot-high pedestal that once held the statue of Confederate General Robert E. Lee lying on city property in Richmond, Virginia, USA, 22 August 2022. The state of Virginia removed the 21-foot-high bronze monument of Lee, once the largest confederate statue in the US, on 08 September 2021. The state then dismantled and removed Lee’s pedestal in December 2021. (Photo by Jim Lo Scalzo/EPA/EFE) 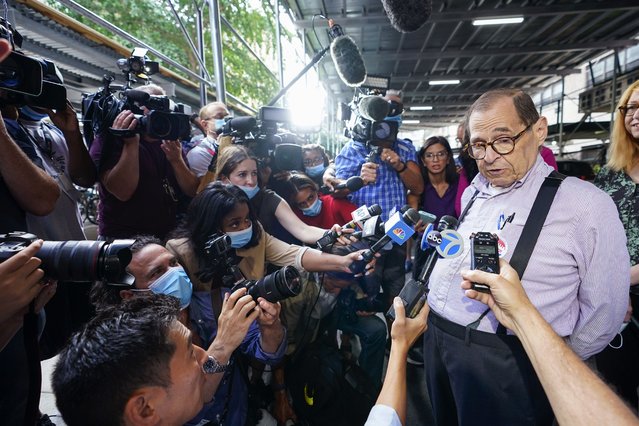 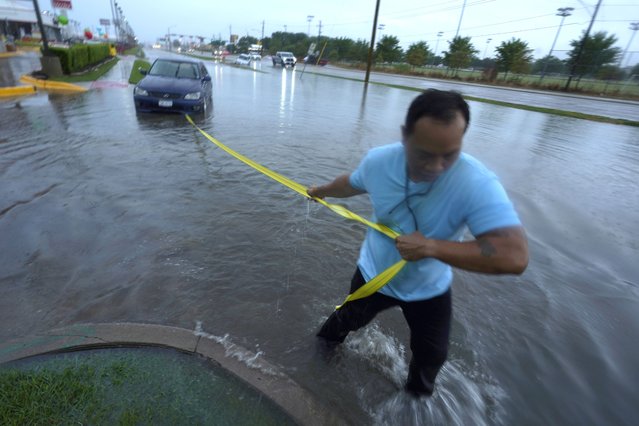 Mon Lun pulls a strap to his water stalled car before towing it out of receding flood waters in Dallas, Monday, August 22, 2022. (Photo by L.M. Otero/AP Photo) 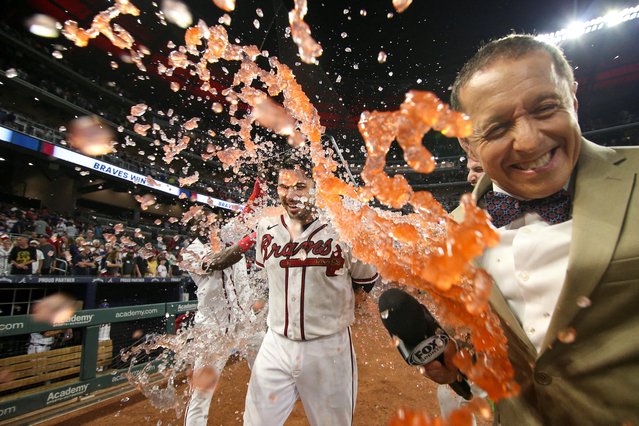 Atlanta Braves pinch hitter Travis d'Arnaud is doused by left fielder Guillermo Heredia after a walk-off single against the Houston Astros as Fox reporter Ken Rosenthal attempts to move out of the way at Truist Park on August 20, 2022. (Photo by Brett Davis/USA TODAY Sports) 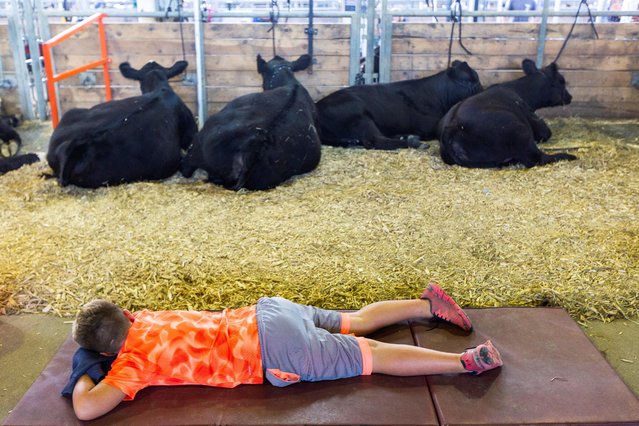 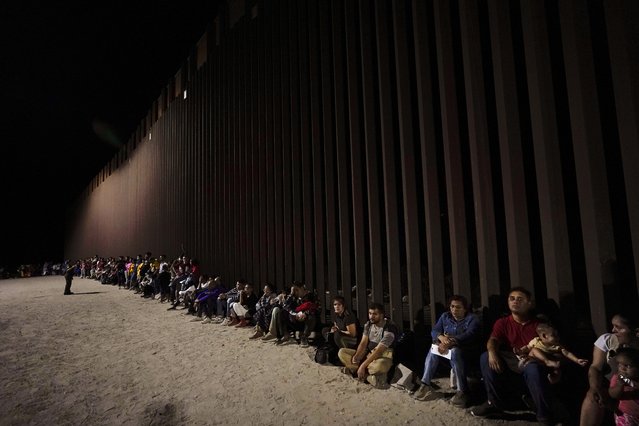 Migrants wait along a border wall Tuesday, August 23, 2022, after crossing from Mexico near Yuma, Ariz. (Photo by Gregory Bull/AP Photo) 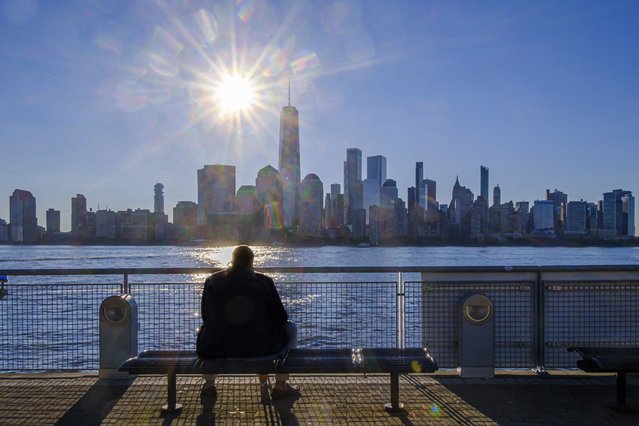 A morning commuter sits on a bench at the ferry terminal in Jersey City, N.J. looking at the lower Manhattan skyline on a cloudless day in New York City, Thursday, August 18, 2022. (Photo by J. David Ake/AP Photo) 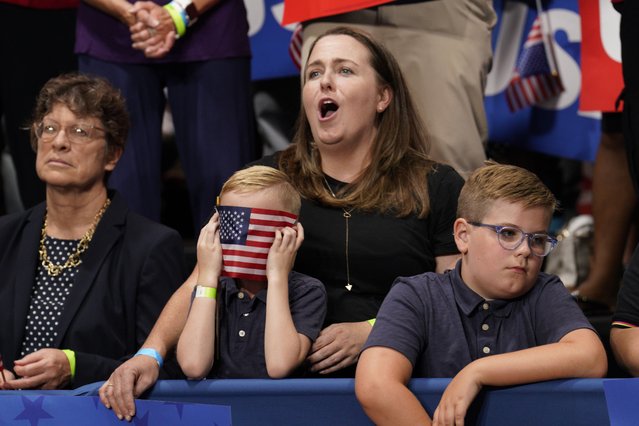 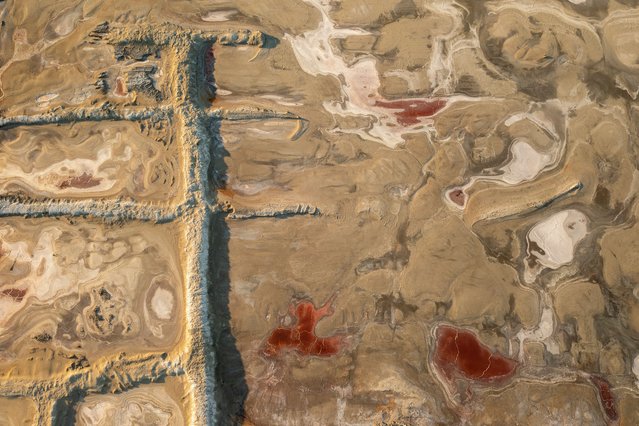 In an aerial view, evaporation ponds are seen in the remnants of Owens Lake on August 22, 2022 near Lone Pine, California. Once one of the biggest inland bodies of water in the United States, Owens Lake was doomed in 1913 by a plan to the divert Sierra Nevada mountains water that fed it to be sent to Los Angeles by an aqueduct. The lake was dried up by the mid-1920s as winds blowing across the exposed lakebed created the largest single source of hazardous PM10 dust pollution. After about $2 billion spent in recent decades to undo the damage, worsening drought conditions have drastically reduced the Sierra snow pack upon which both the depleted lake and the city of Los Angeles depend. Large portions of the West are now in the most extreme drought category, and fire officials are warning of another devastating wildfire season in California. (Photo by David McNew/Getty Images) 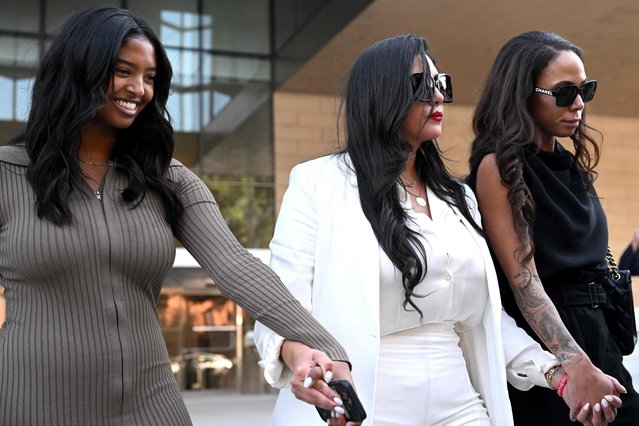 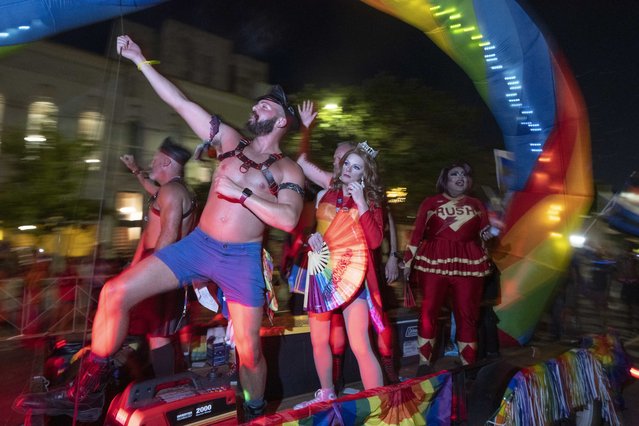 Revelers parade down Congress Avenue near the Texas Capitol on August 20, 2022 as the Austin Pride Parade returns after a three-year hiatus due to the pandemic. LBGTQ organizers estimated over 40,000 people marched and attended the night gala from the Capitol to the Congress Avenue bridge over Lady Bird Lake. (Photo by Bob Daemmrich/ZUMA Press Wire/Rex Features/Shutterstock) 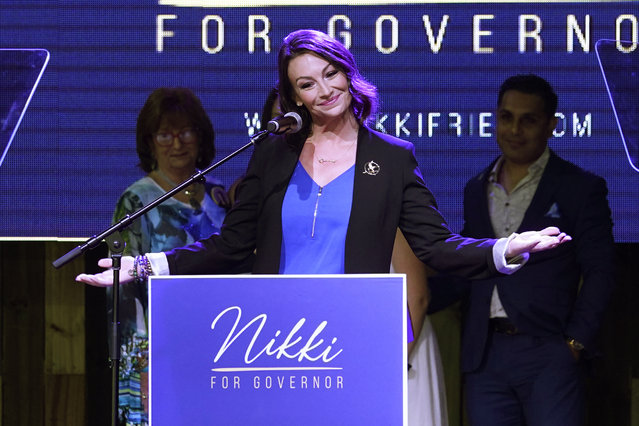 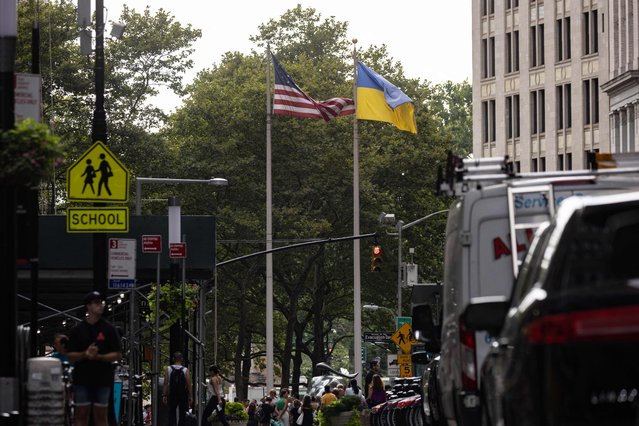 Raised Ukrainian and American flags are seen after a press conference to celebrate Ukraine's Independence Day on August 23, 2022 in New York. (Photo by Yuki Iwamura/AFP Photo) 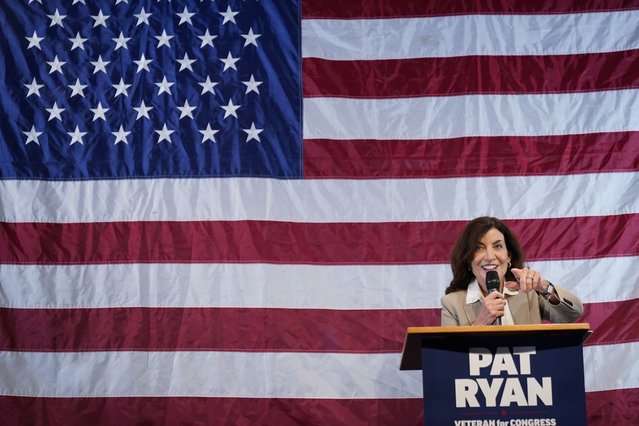 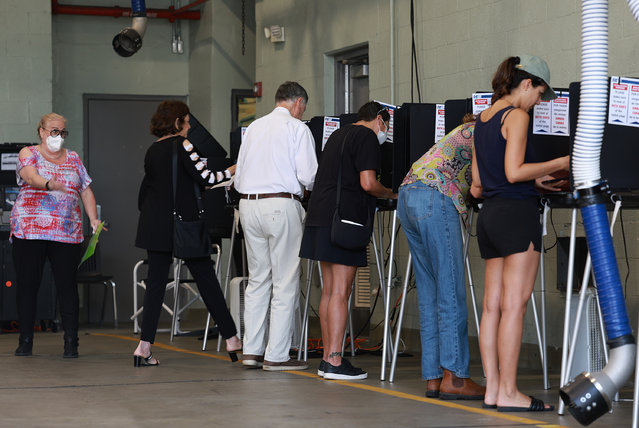 Voters cast their ballots at a polling station setup in a fire station on August 23, 2022 in Miami Beach, Florida. Voters across the state cast their ballots during the Florida Primary Elections. (Photo by Joe Raedle/Getty Images) 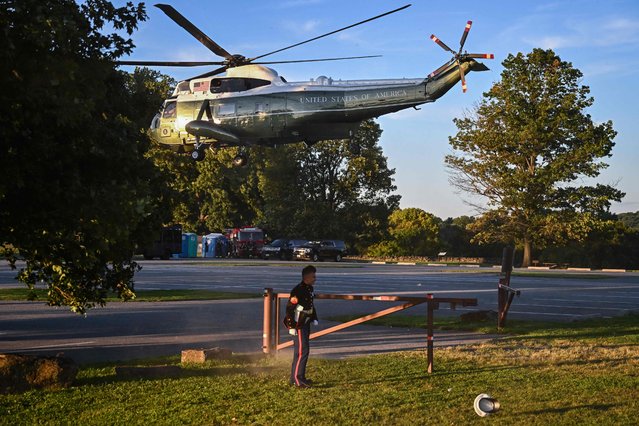 A US Marines hat is blown off as US President Joe Biden takes off from Brandywine Creek State Park in Marine One in Wilmington, Delaware on August 20, 2022. (Photo by Jim Watson/AFP Photo) 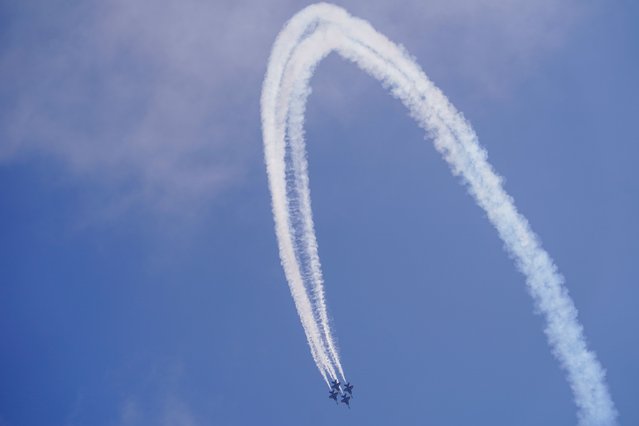 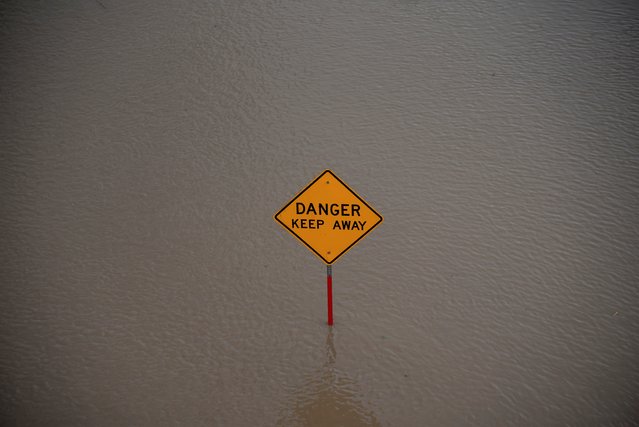 A sign is visible in a flooded area of The Trinity River in Dallas, Texas on Monday, August 22, 2022. (Emil Lippe for The Washington Post) 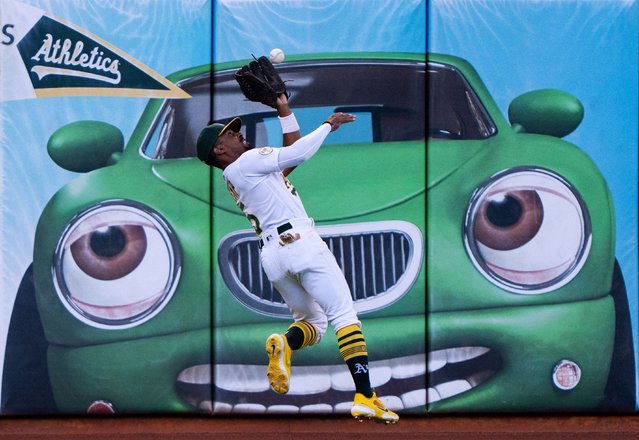