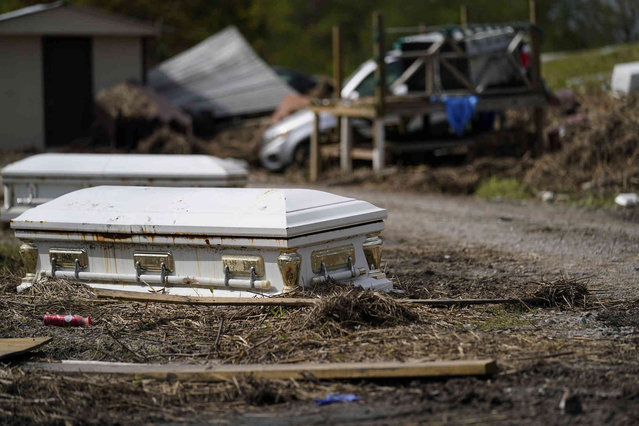 Displaced caskets that floated away from a cemetery during flooding sits along a road in Ironton, La., Monday, September 27, 2021. A month after Hurricane Ida, small communities along Louisiana's southeastern coast are still without power or running water. Some residents have lost most of their possessions to the storm's floodwaters. (Photo by Gerald Herbert/AP Photo) 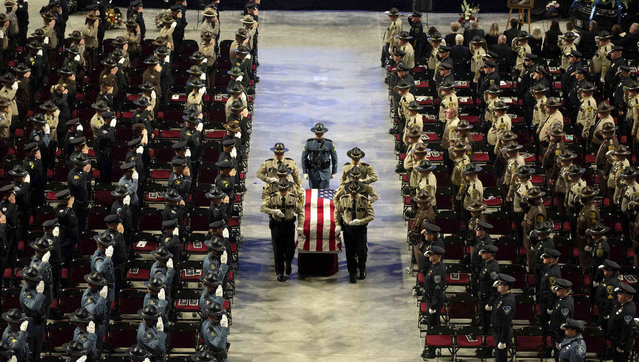 Hancock County Sheriff's deputies escort the flag-draped casket of Sheriff's Deputy Luke Gross out of the Cross Insurance Center during a funeral service, Thursday, September 30, 2021, in Bangor, Maine. Gross, 44, a veteran Hancock County sheriff’s deputy, was struck and killed by a pickup truck while responding to a car crash in Trenton on Sept. 23. (Photo by Linda Coan O'Kresik/The Bangor Daily News via AP Photo) 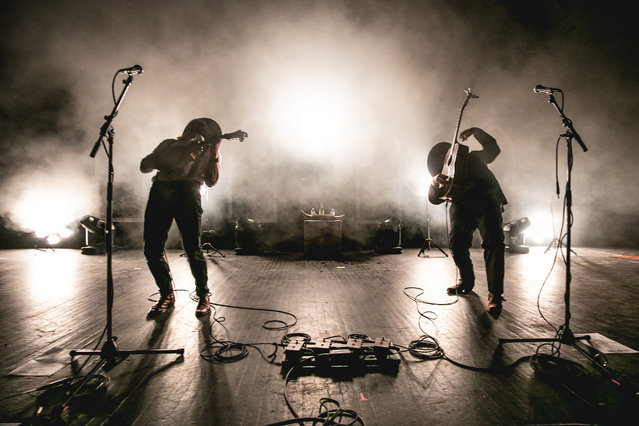 The Death South performing at the Fillmore in Detroit, US on September 30, 2021. (Photo by Brandon Nagy/Rex Features/Shutterstock) 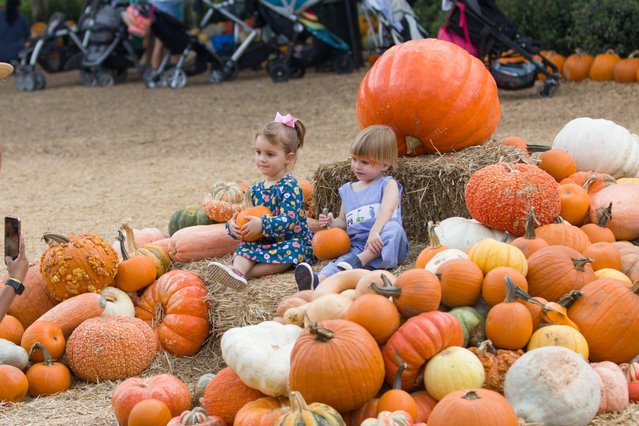 Children are seen among pumpkins at Arboretum's Pumpkin Village in Dallas, Texas, the United States, September 28, 2021. The Pumpkin Village returns to Dallas Arboretum with more than 90,000 pumpkins, gourds and squash. This year's theme is “Bugtopia”. (Photo by Xinhua News Agency/Rex Features/Shutterstock) 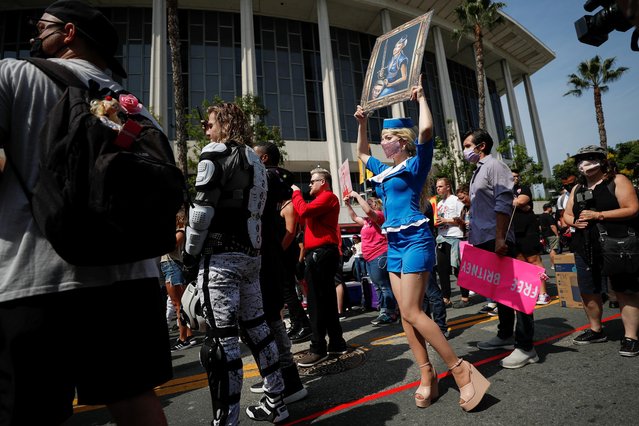 Nefertara, a supporter of pop star Britney Spears, wears an outfit inspired by the singer as she holds a picture of Britney that she painted, during a gathering on the day of a conservatorship case hearing at Stanley Mosk Courthouse in Los Angeles, California, U.S., September 29, 2021. (Photo by Mario Anzuoni/Reuters) 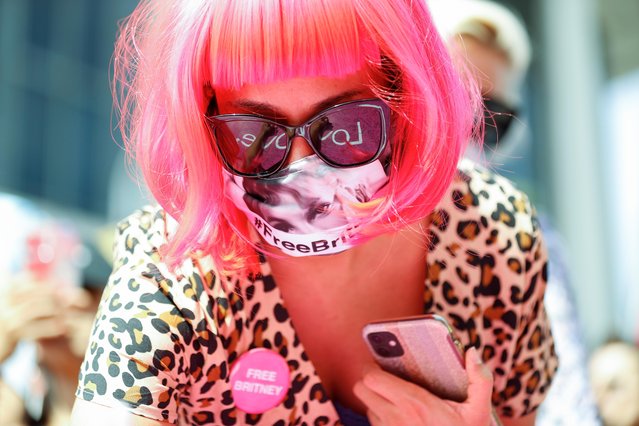 A supporter of pop star Britney Spears, wearing a face mask with an image of the singer, writes a message on a sign on the day of a conservatorship case hearing at Stanley Mosk Courthouse in Los Angeles, California, U.S., September 29, 2021. (Photo by Mario Anzuoni/Reuters) 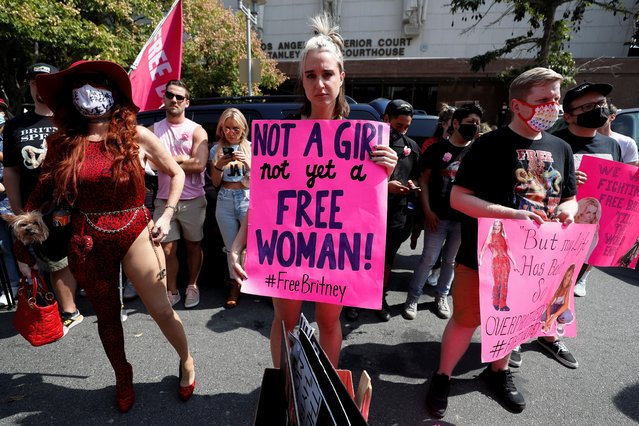 Supporters of pop star Britney Spears hold signs as they gather on the day of a conservatorship case hearing at Stanley Mosk Courthouse in Los Angeles, California, U.S., September 29, 2021. (Photo by Mario Anzuoni/Reuters) 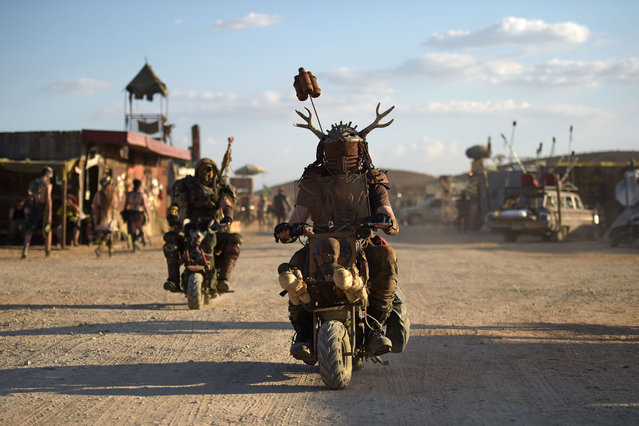 People attend Wasteland Weekend Festival at the Mojave desert in Edwards, California on September 25, 2021. The organizers require all festival goers to be in costume, with the idea of creating a full-inmersion effect, making attendees feel like theyre inside a Mad Max-style movie for 5 days. Activities include any number of themed distractions from the real world: live bands, DJs, car cruises, costume contests, a film festival, a post-apocalyptic swimsuit competition, Thunderdome battles, light-hearted role playing challenges like a bounty-hunting game, crafting workshops, free hair and makeup at the event-sponsored beauty salon, fire performers, a 24 hour radio station, post-apocalyptic gladiator fights, an archery range, a casino. (Photo by Agustin Paullier/AFP Photo) 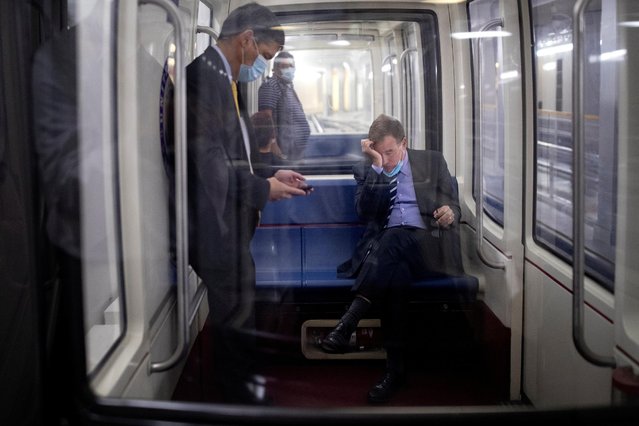 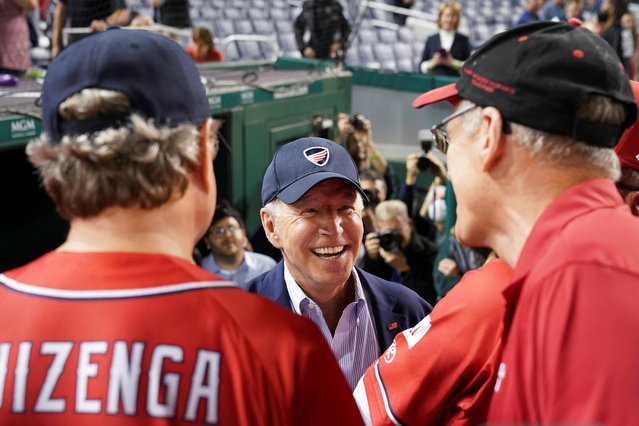 U.S. President Joe Biden speaks with members of the Republicans team as he attends the annual Congressional Baseball Game at Nationals Park in Washington, U.S., September 29, 2021. (Photo by Kevin Lamarque/Reuters) 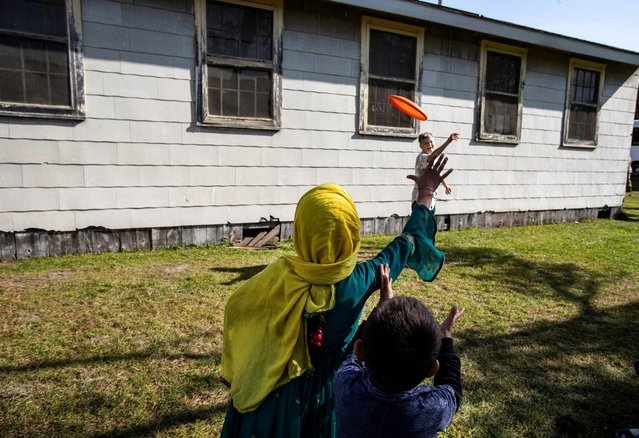 Volunteer Sandra Hoeser plays frisbee with Afghan refugees at the Ft. McCoy US Army base on September 30, 2021 in Ft. McCoy, Wisconsin. There are approximately 12,600 Afghan refugees being cared for at the base under Operation Allies Welcome. The Department of Defense, through US Northern Command and US Army North, and in support of the Department of Homeland Security, is providing transportation, temporary housing, medical screening and general support for at least 50,000 Afghan evacuees at suitable facilities in permanent or temporary structures while the Afghans complete the processing necessary to resettle in the United States. (Photo by Barbara Davidson/Pool via AFP Photo) 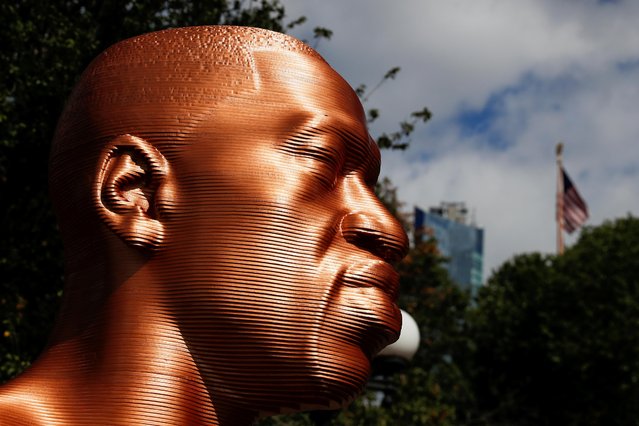 A sculpture of George Floyd is seen during the SEEINJUSTICE art exhibition, in New York, U.S. September 30, 2021. (Photo by Shannon Stapleton/Reuters) 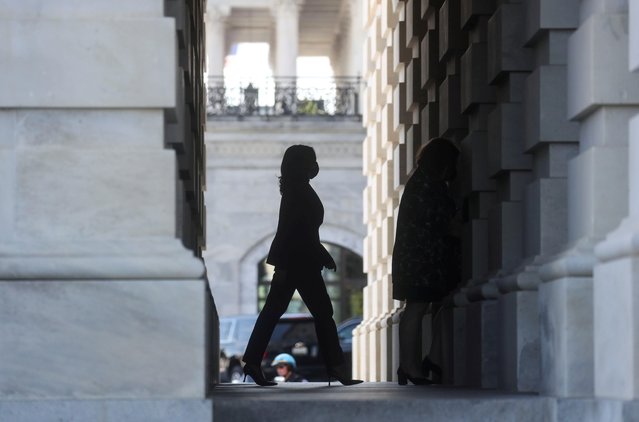 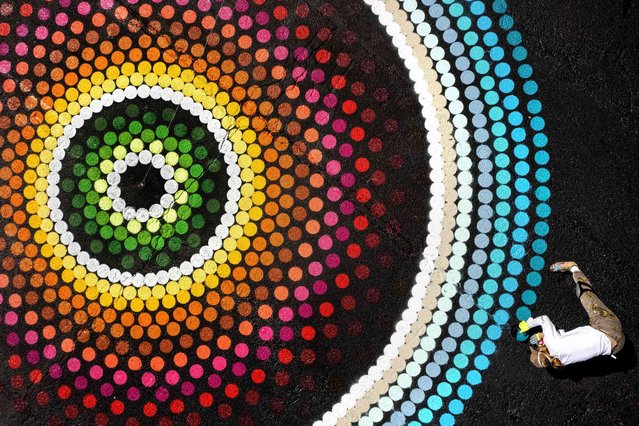 Sunni DiLuzio spray paints circles on the road at the intersection of State and Third Streets in downtown Alton, Ill., on Tuesday, September 28, 2021. DiLuzio is the girlfriend and assistant to artist Joe Miller who was commissioned by Alton Main Street to design and paint the street mural “Alton Ripple”. The colorful dots flare outward like rings from a center point and pulse because the radiant progression encourages it. The mural is expected to be finished later this week and covered with a clear sealant to help preserve it. (Photo by David Carson/St. Louis Post-Dispatch via AP Photo) 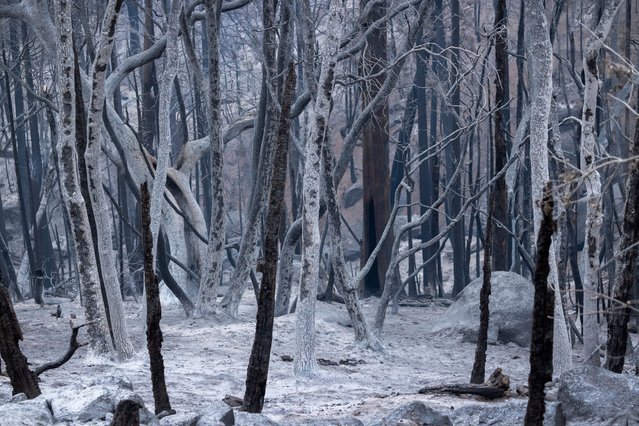 A forest of ashen trees appear as if in a winter scene in the wake of flames as the Windy Fire continues tp spread on September 27, 2021 south of California Hot Springs, California. The wildfire has burned through numerous groves of giant sequoia trees and is now threatening small communities scattered throughout the Southern Sierra foothills in Sequoia National Forest, south of Sequoia National Park and Giant Sequoia National Monument. The lightning-caused fire has expanded to more than 82,000 acres and is two percent contained. (Photo by David McNew/Getty Images) 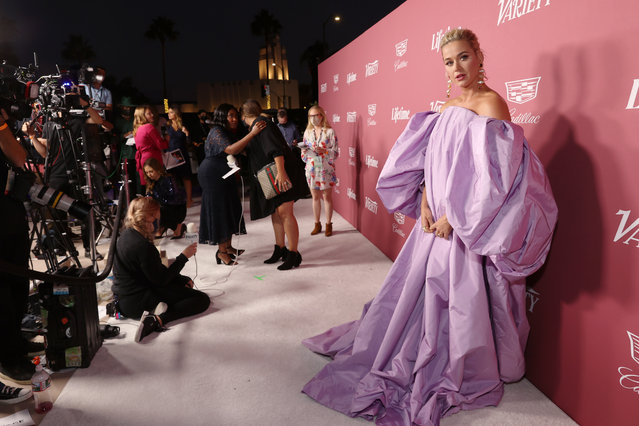 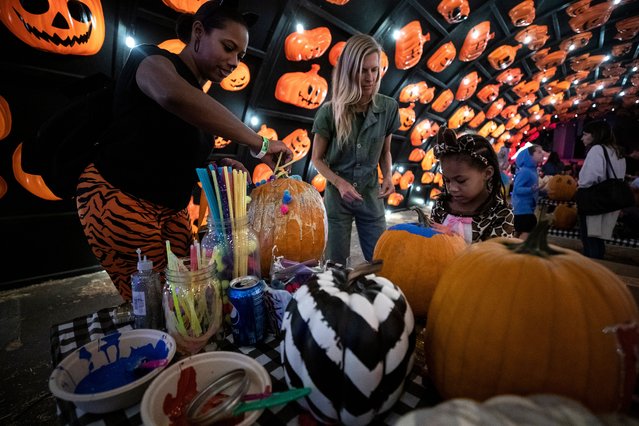 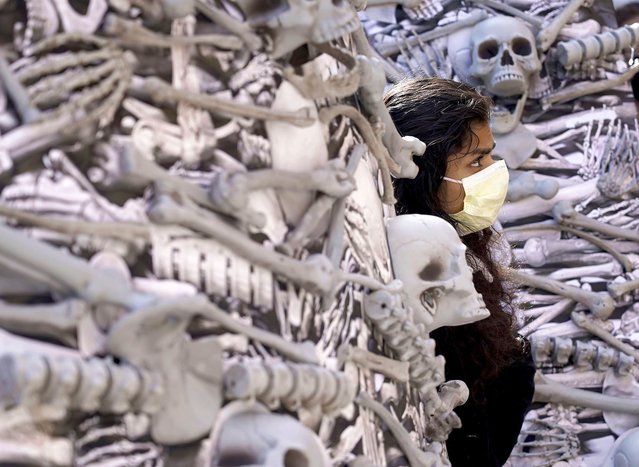 Volunteer Ammu Dinesh, of Belmont, Mass., looks out from a bone sculpture before carrying it to the home of Moderna CEO Stephane Bancel to demand global vaccine equity on Wednesday, September 29, 2021 in Boston. (Photo by Mary Schwalm/AP Images for PrEP4All) 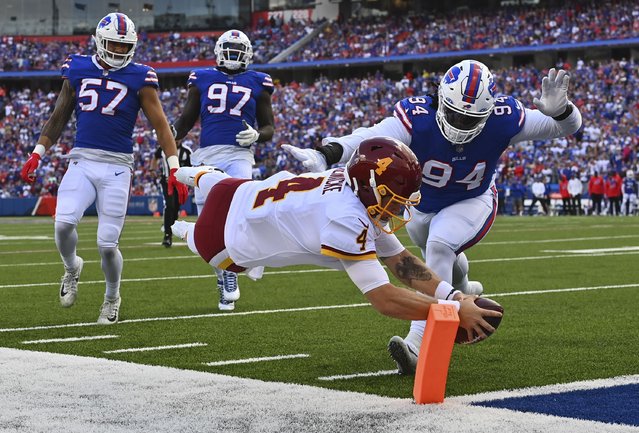 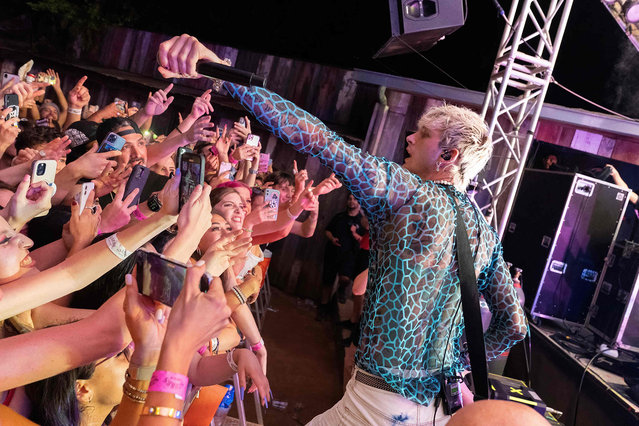