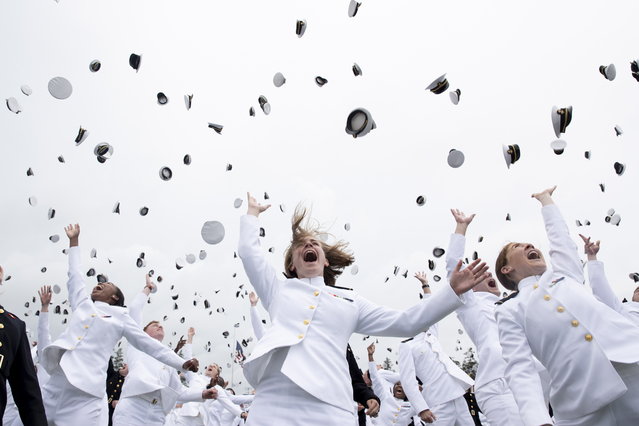 United States Naval Academy graduates celebrate and throw their hats at the end of the academy's graduation and commission ceremony, at the Navy-Marine Corps Memorial Stadium in Annapolis, Maryland, USA, 27 May 2022. There are 1,100 graduates in the Naval Academy class of 2022. (Photo by Michael Reynolds/EPA/EFE) 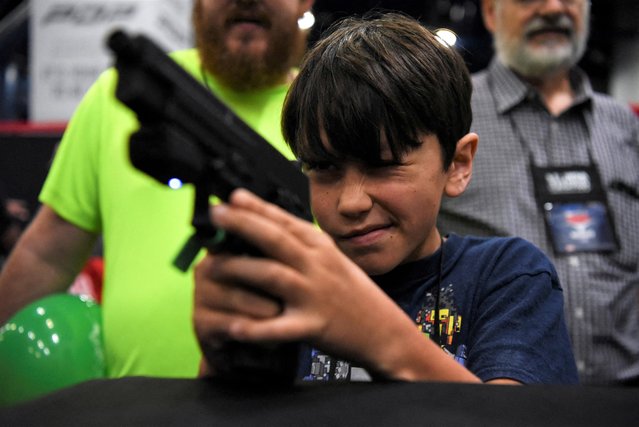 A child engages in virtual target practice as attendees try out the guns on display at the National Rifle Association (NRA) annual convention in Houston, Texas, U.S. May 28, 2022. (Photo by Callaghan O'Hare/Reuters) 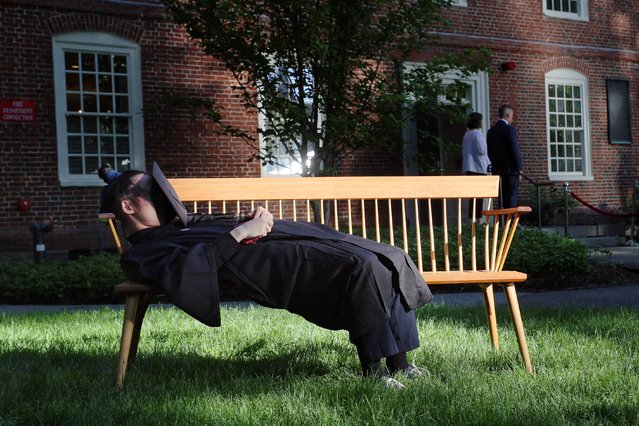 A student lies on a bench before Commencement Exercises for the classes of 2020 and 2021, which were originally not held in person because of the coronavirus disease (COVID-19) pandemic, in Cambridge, Massachusetts, U.S., May 29, 2022. (Photo by Brian Snyder/Reuters) 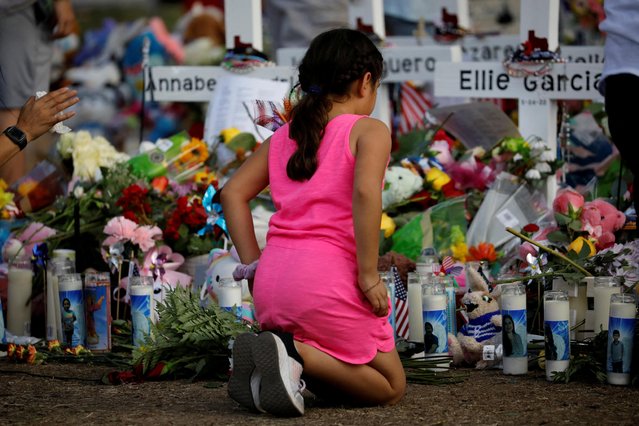 A girl pays respects at the memorial at Robb Elementary school, where a gunman killed 19 children and two adults, in Uvalde, Texas, U.S. May 28, 2022. (Photo by Marco Bello/Reuters) 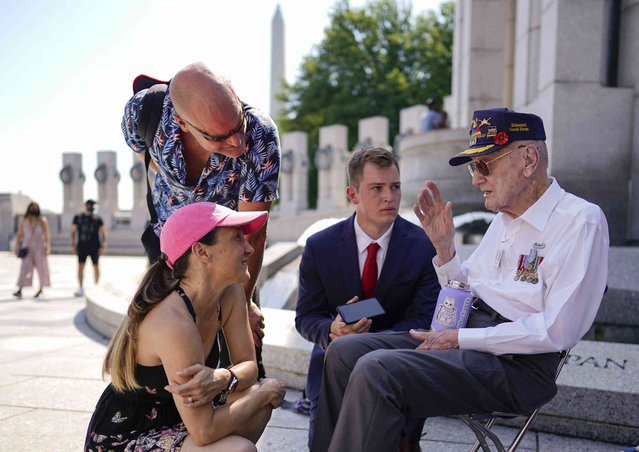 World War II Veteran, retired U.S. Air Force Senior Master Sgt. Harry Miller, 93, right, recalls his time in the service with Peter Lynch, second from right, and others, at the World War II Memorial on Memorial Day in Washington, Monday, May 30, 2022. During WW II, Harry served in the 740th Tank Battalion as a tank crewman and participated in the “The Battle of the Bulge”. (Photo by Carolyn Kaster/AP Photo) 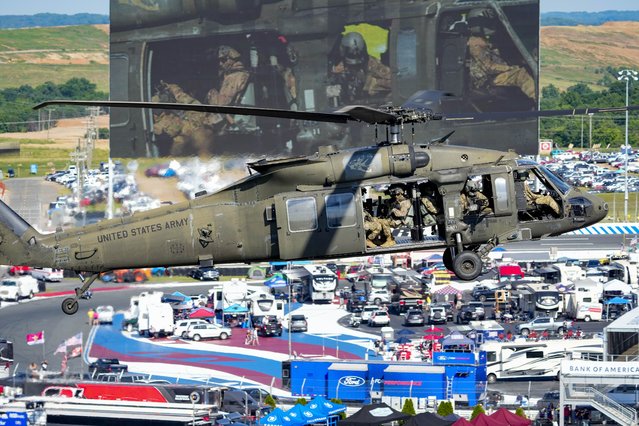 US Army Fort Bragg Blackhawk helicopter flies in for the Memorial Day ceremony during the Coca-Cola 600 at Charlotte Motor Speedway in Concord, North Carolina on May 29, 2022. (Photo by Jim Dedmon/USA TODAY Sports) 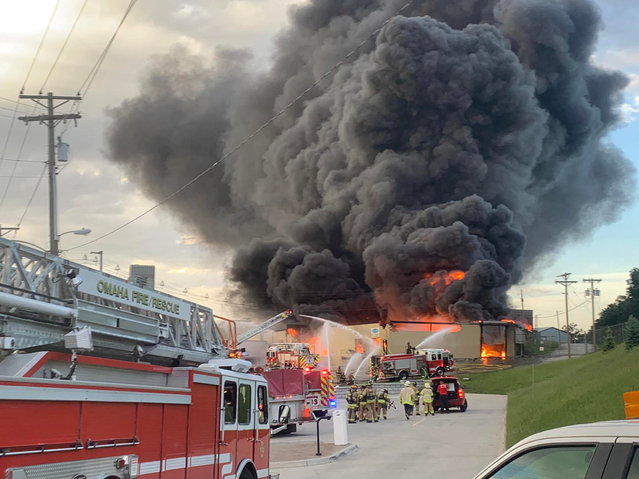 Firefighters work to extinguish a fire as smoke billows at a chemical plant in Omaha, Nebraska U.S. May 30, 2022 in this picture obtained from social media. Picture taken May 30, 2022. (Photo by Omaha Fire Department/Facebook via Reuters) 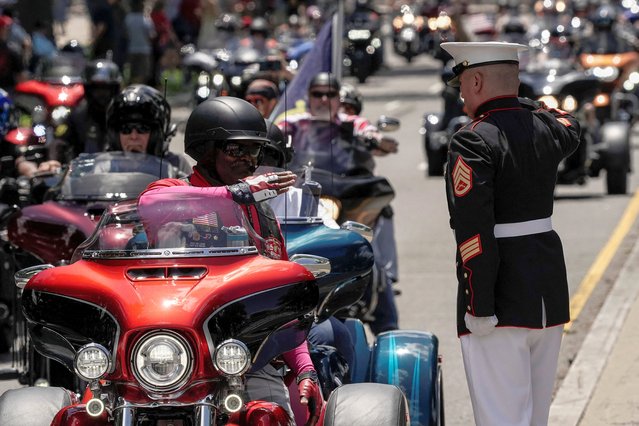 U.S. Marine Corp Staff Sgt. Tim Chambers salutes during the “Rolling to Remember” motorcycle rally, successor to “Rolling Thunder” as it rides through Washington to bring attention to issues faced by veterans, in Washington, U.S., May 29, 2022. (Photo by Ken Cedeno/Reuters) 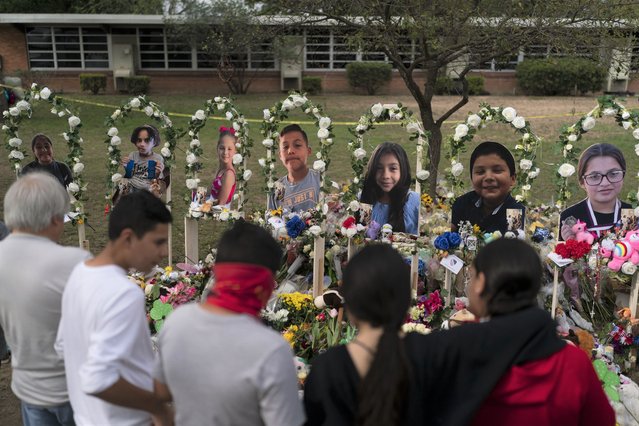 People gather at a memorial at Robb Elementary School in Uvalde, Texas Monday, May 30, 2022, to pay their respects to the victims killed in last week's school shooting. (Photo by Jae C. Hong/AP Photo) 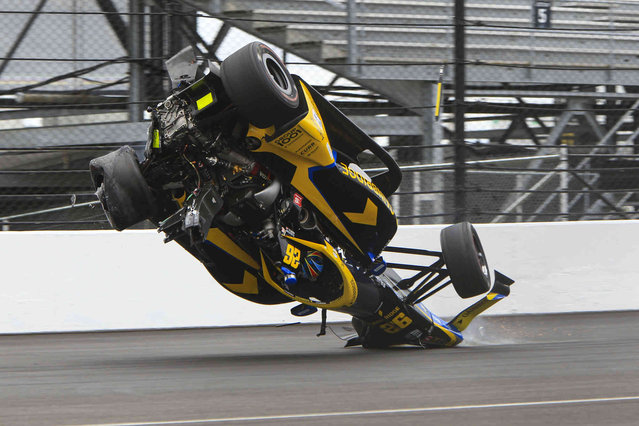 Colton Herta crashes in the first turn during the final practice for the Indianapolis 500 auto race at Indianapolis Motor Speedway in Indianapolis, Friday, May 27, 2022. (Photo by Joe Watts/AP Photo) 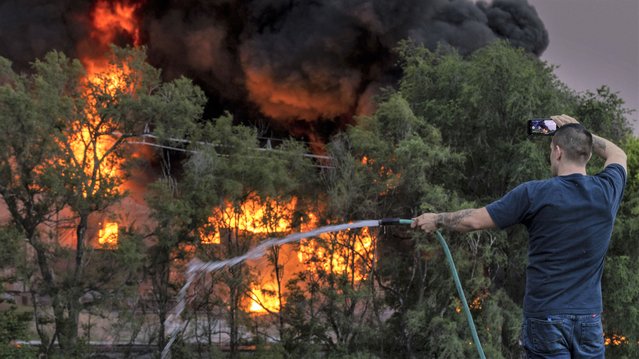 A man sprays down the roof of a neighboring building while also filming the scene of a three-alarm fire at Nox-Crete, Inc., at 1415 S. 20th Street in Omaha, Neb., Monday, May 30, 2022. (Photo by Chris Machian/Omaha World-Herald via AP Photo) 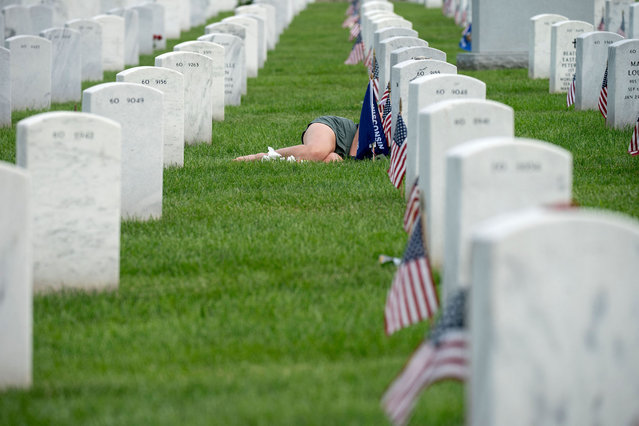 A woman lies in front of a grave in Section 60 at Arlington Cemetery in Arlington, Virginia, on May 29, 2022. (Photo by Stefani Reynolds/AFP Photo) 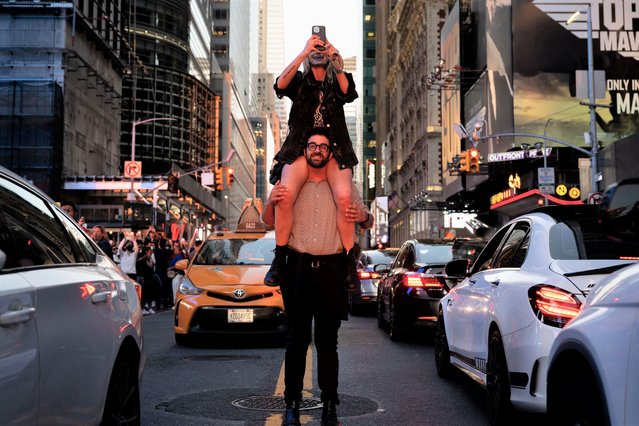 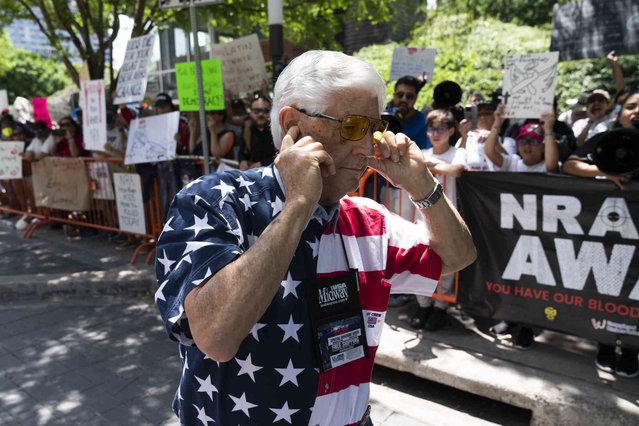 A member of the National Rifle Association plugs his ears with his fingers as he walks past protesters during the NRA's annual meeting at the George R. Brown Convention Center in Houston, Friday, May 27, 2022. (Photo by Jae C. Hong/AP Photo) 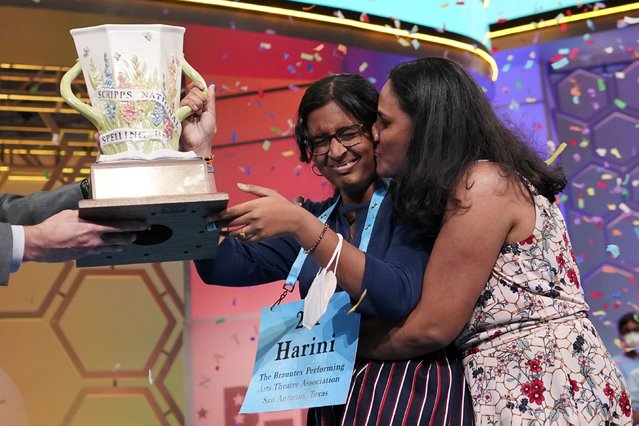 Harini Logan, 14, from San Antonio, Texas, gets a kiss from her mom Rampriya Logan on stage as she celebrates winning the Scripps National Spelling Bee, Thursday, June 2, 2022, in Oxon Hill, Md. (Photo by Alex Brandon/AP Photo) 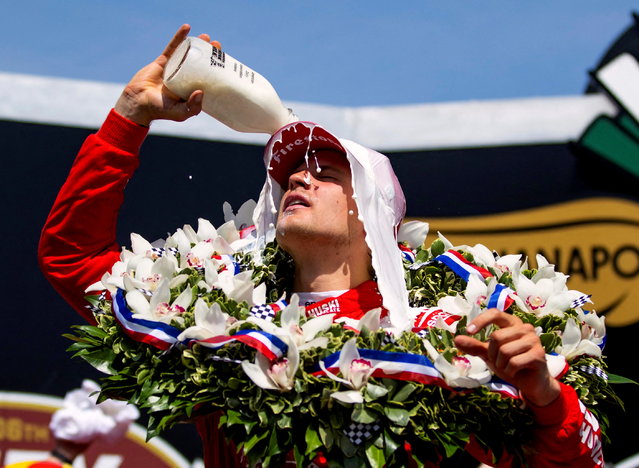 IndyCar Series driver Marcus Ericsson celebrates with the milk after winning the Indianapolis 500 at Indianapolis Motor Speedway in Indianapolis, Indiana on May 29, 2022. (Photo by Mark J. Rebilas/USA TODAY Sports) 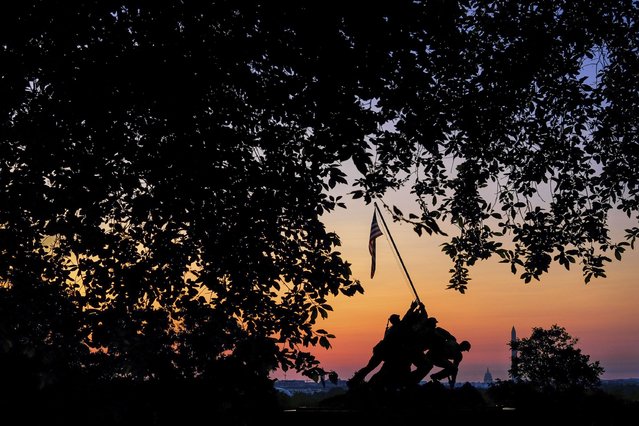 Sunrise silhouettes the US Marine Corps War Memorial in Arlington, Va., early in the morning on Memorial Day, Monday, May 30, 2022. (Photo by J. David Ake/AP Photo) 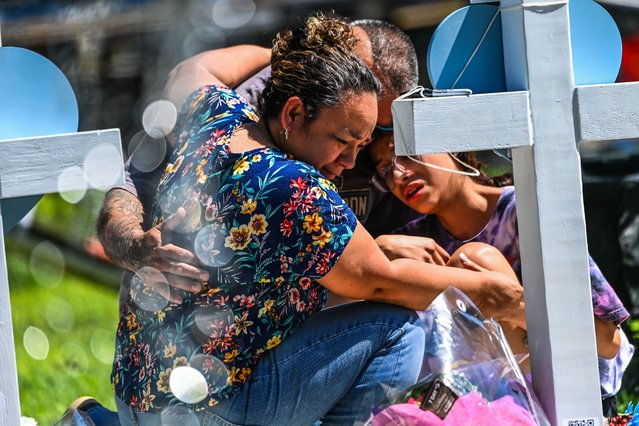 People mourn at a makeshift memorial outside Uvalde County Courthouse in Uvalde, Texas, on May 26, 2022. Texas police faced angry questions May 26, 2022 over why it took an hour to neutralize the gunman who murdered 19 small children and two teachers in Uvalde, as video emerged of desperate parents begging officers to storm the school. (Photo by Chandan Khanna/AFP Photo) 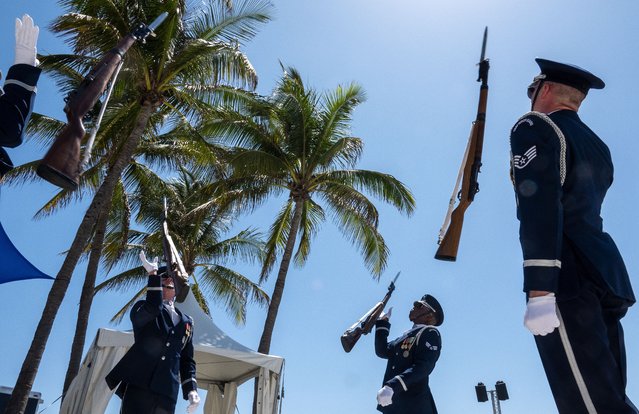 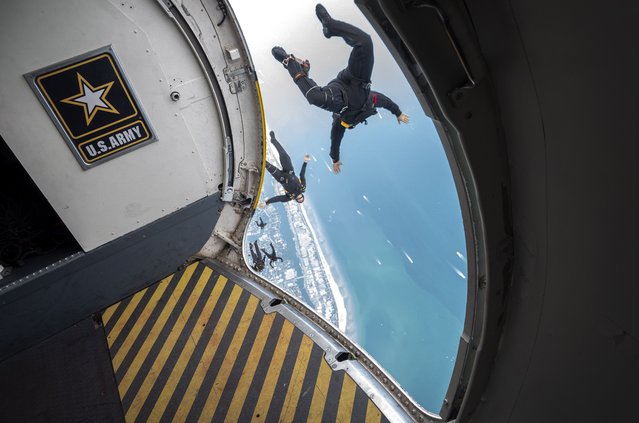 Members of the US Army Golden Knights Parachute team are jumping during the Hyundai Air & Sea Show during the Memorial Day weekend in Miami Beach, Florida, USA, 29 May 2022. The National Salute to America’s Heroes featuring the Hyundai Air & Sea Show is held on 28-29 May as part of the Memorial Day weekend celebrations in Miami Beach. The Golden Knights are one of only three Department of Defense-sanctioned aerial demonstration teams, along with the U.S. Navy Blue Angels and the U.S. Air Force Thunderbirds. (Photo by Cristobal Herrera-Ulashkevich/EPA/EFE)
Edit Del
06 Jun 2022 04:58:00, post received 0 comments
Publication archive:
←   →
Popular tags:
All tags
Last searches: