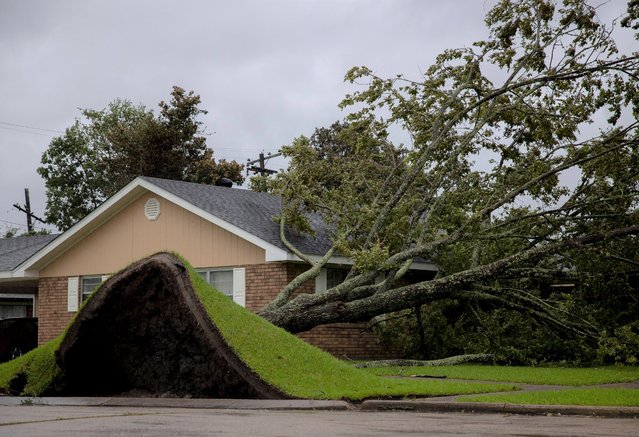 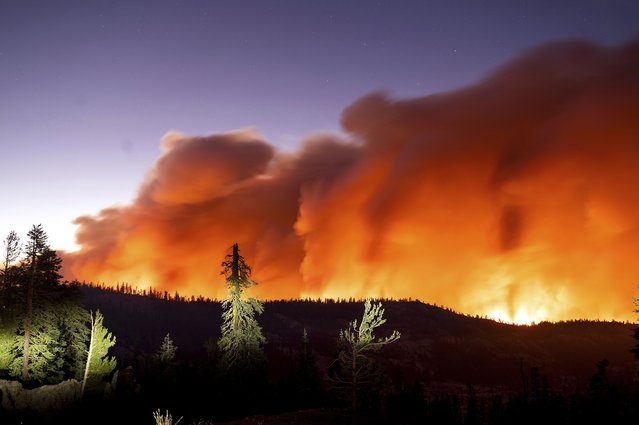 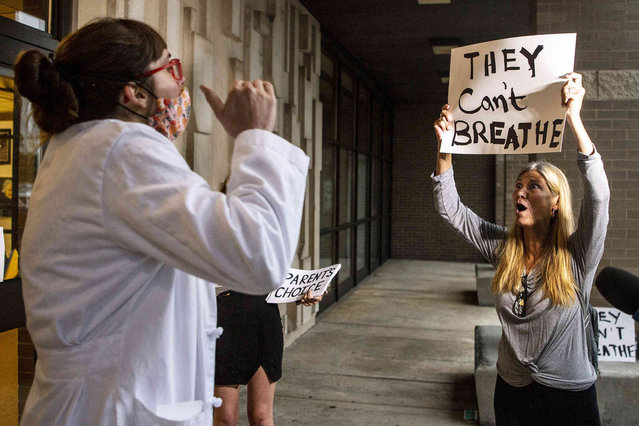 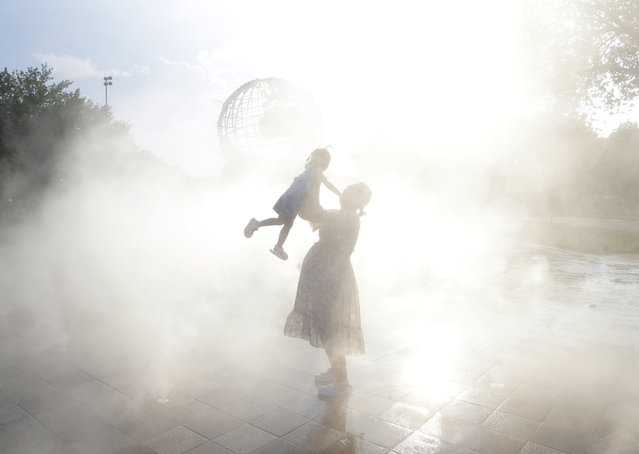 People cool off in hot and humid weather at the mist garden near the World's Fair Unisphere in Flushing Meadows-Corona Park in New York City on Thursday, August 26, 2021. A heat advisory is in effect for New York City as High temperatures and Hot Humid Weather. (Photo by John Angelillo/UPI/Rex Features/Shutterstock) 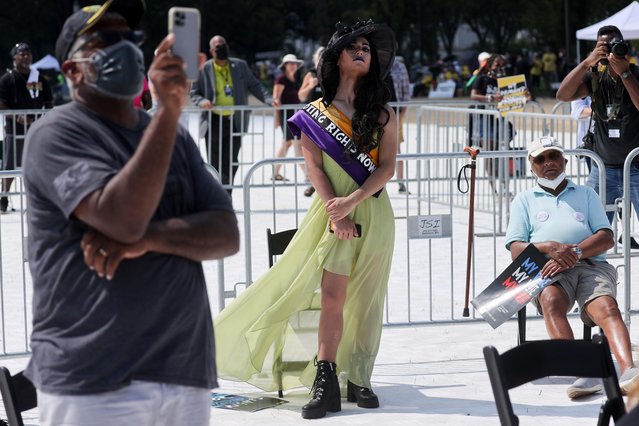 Josh Faires, who performs as Ms. Guided, wears a “Voting Rights Now” sash at the “March On For Voting Rights” rally in Washington, U.S. August 28, 2021. (Photo by Jonathan Ernst/Reuters) 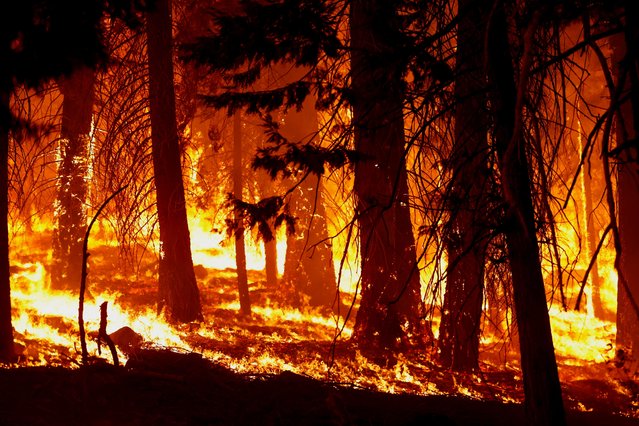 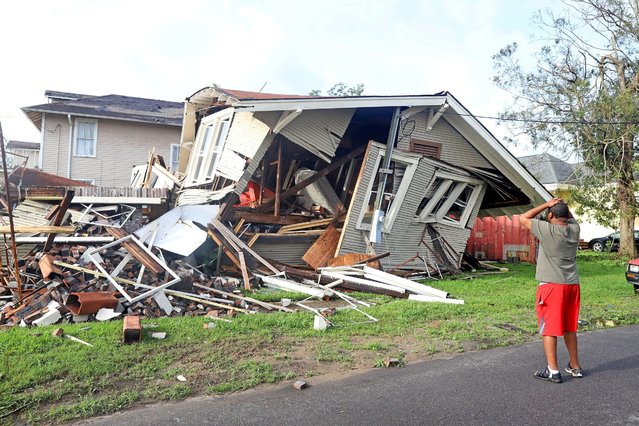 Dartanian Stovall looks at the house that collapsed with him inside during the height of Hurricane Ida in New Orleans, Louisiana, August 30, 2021. Stovall said he was inside the house he was renovating on Lasalle Street in the Uptown neighborhood when the chimney collapsed and the rest of the house followed. He managed to crawl to safety. (Photo by Michael DeMocker/USA TODAY Network via Reuters) 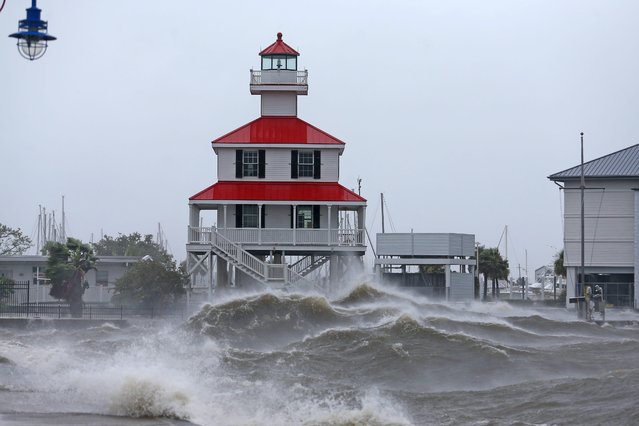 Waves crash against the New Canal Lighthouse on Lake Pontchartrain as the effects of Hurricane Ida begin to be felt in New Orleans, Louisiana, August 29, 2021. (Photo by Michael DeMocker/USA TODAY Network via Reuters) 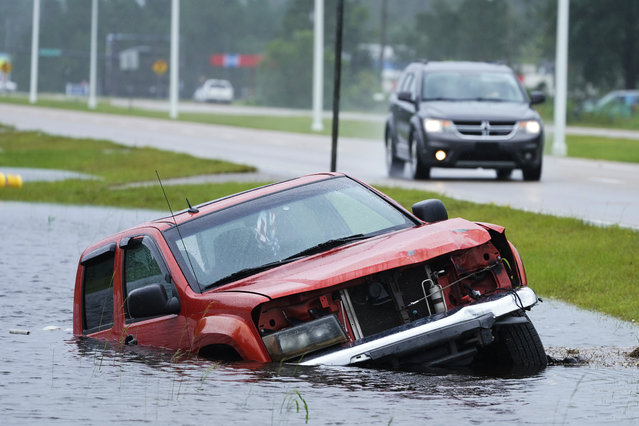 An abandoned vehicle is half submerged in a ditch next to a near flooded highway as the outer bands of Hurricane Ida arrive Sunday, August 29, 2021, in Bay Saint Louis, Miss. (Photo by Steve Helber/AP Photo) 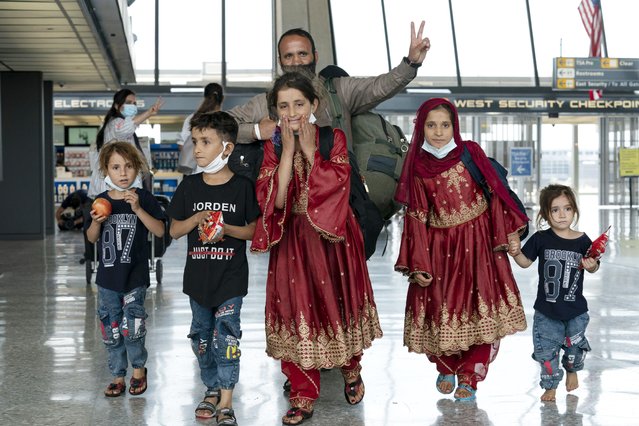 Families evacuated from Kabul, Afghanistan, walk through the terminal before boarding a bus after they arrived at Washington Dulles International Airport, in Chantilly, Va., on Friday, August 27, 2021. (Photo by Jose Luis Magana/AP Photo) 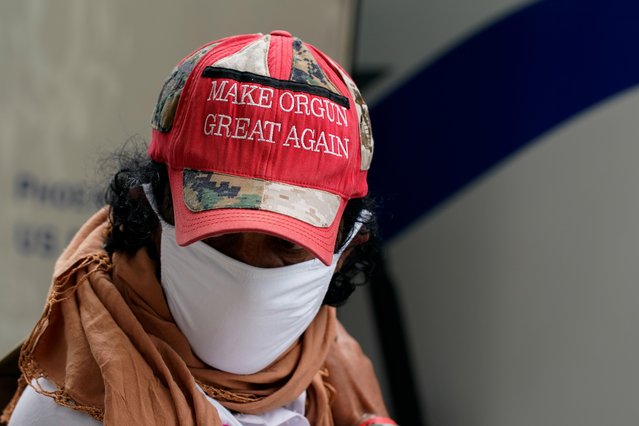 A man wearing a hat that reads “Make Orgun Great Again” boards a bus taking him and other Afghan refugees to a processing center upon arrival at Dulles International Airport in Dulles, Virginia, U.S., August 29, 2021. (Photo by Elizabeth Frantz/Reuters) 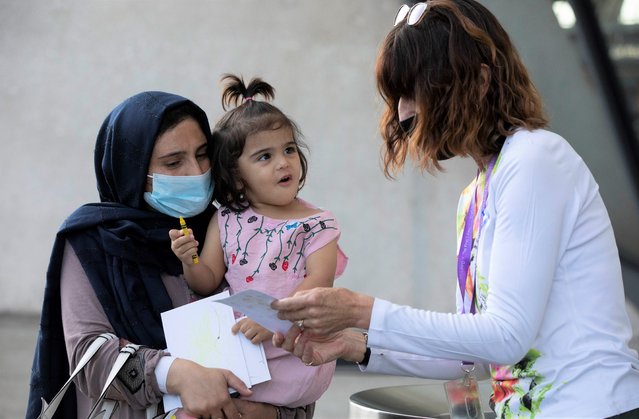 A volunteer interacts with a child evacuated from Kabul, Afghanistan at Washington Dulles International Airport, in Chantilly, Va., on Saturday, August 28, 2021. (Photo by Gemunu Amarasinghe/AP Photo) 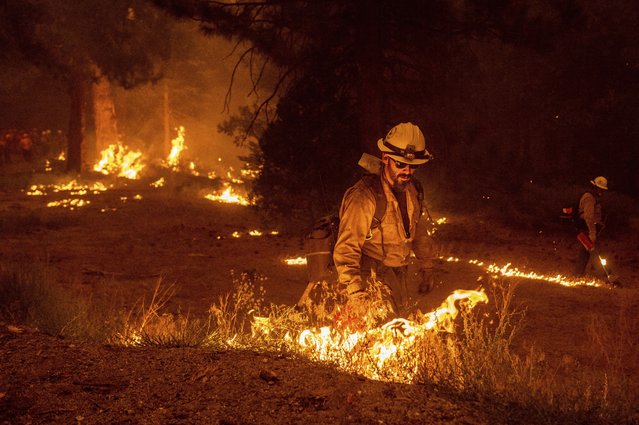 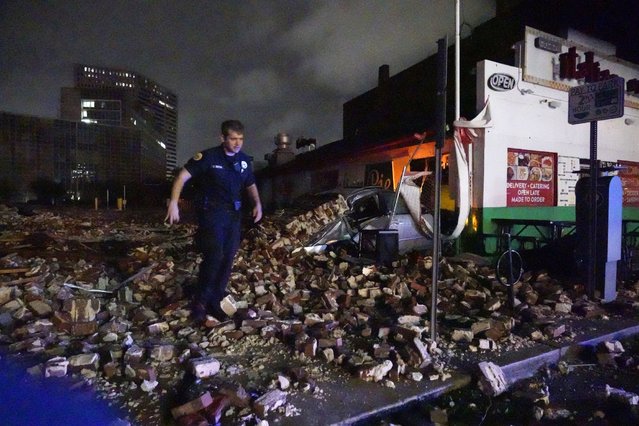 New Orleans Police detective Alexander Reiter, looks over debris from a building that collapsed during Hurricane Ida in New Orleans, Monday, August 30, 2021. Hurricane Ida knocked out power to all of New Orleans and inundated coastal Louisiana communities on a deadly path through the Gulf Coast that is still unfolding and promises more destruction. (Photo by Gerald Herbert/AP Photo) 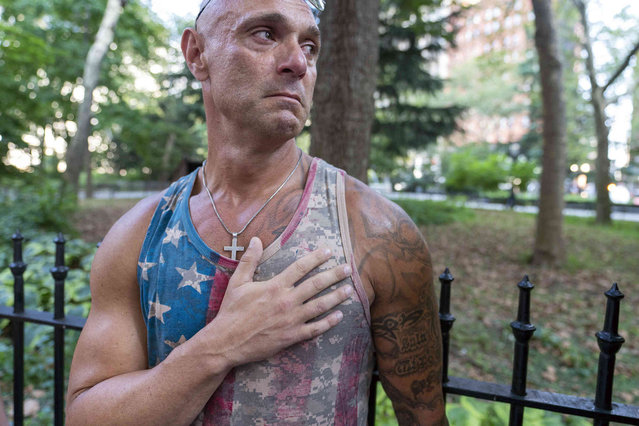 Angelo Boncaraglio, of Staten Island, holds his hand to his heart during the national anthem during a demonstration against COVID-19 vaccination mandates, Wednesday, August 25, 2021, in New York. (Photo by Mary Altaffer/AP Photo) 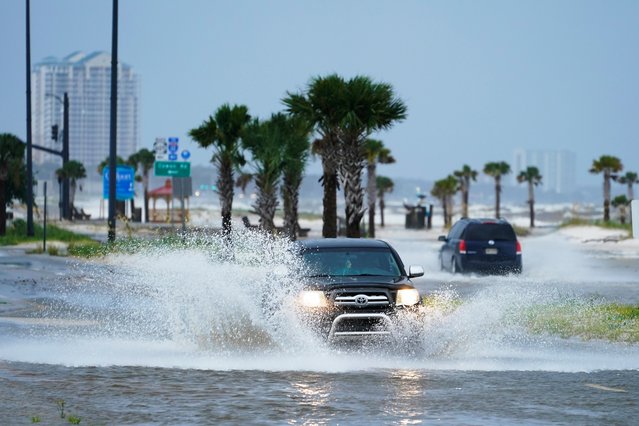 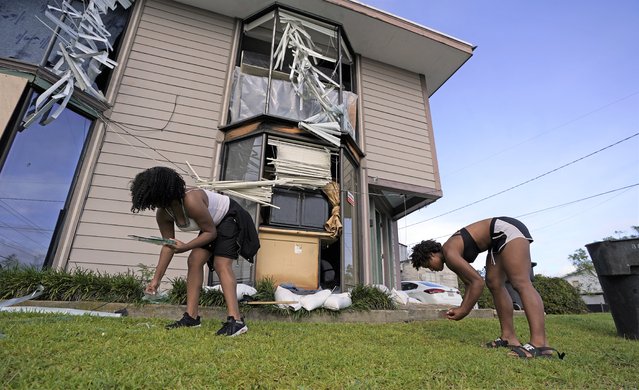 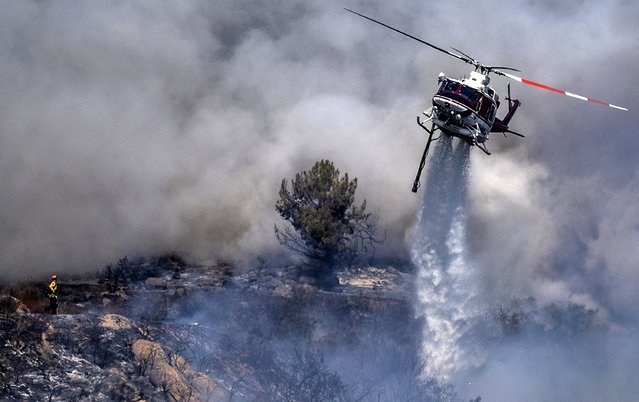 A firefighter is dwarfed by an aerial drop at the the Chaparral Fire in Murrieta which still blazes, Sunday, August 29, 2021. Several homes appear to be evacuated in the area. (Photo by Cindy Yamanaka/The Orange County Register via AP Photo) 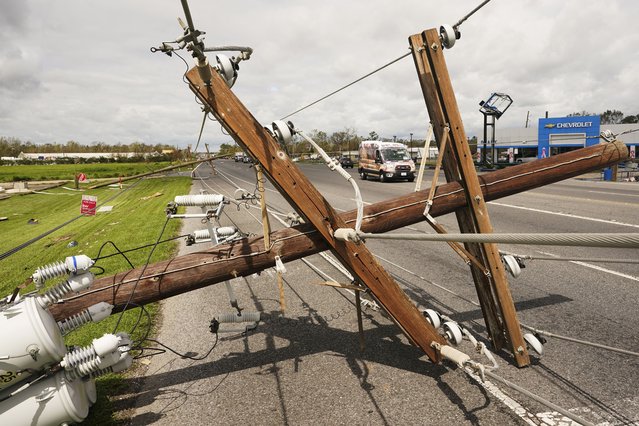 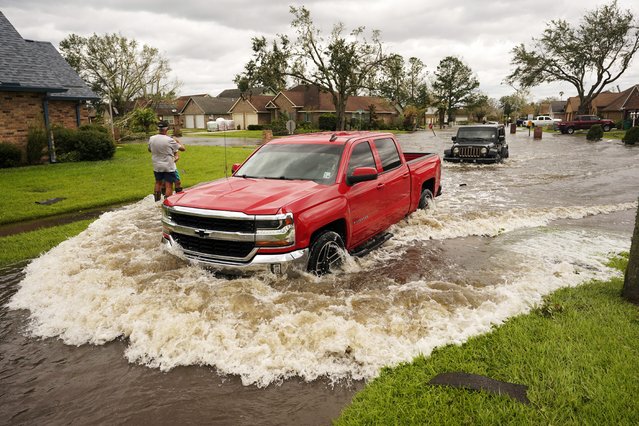