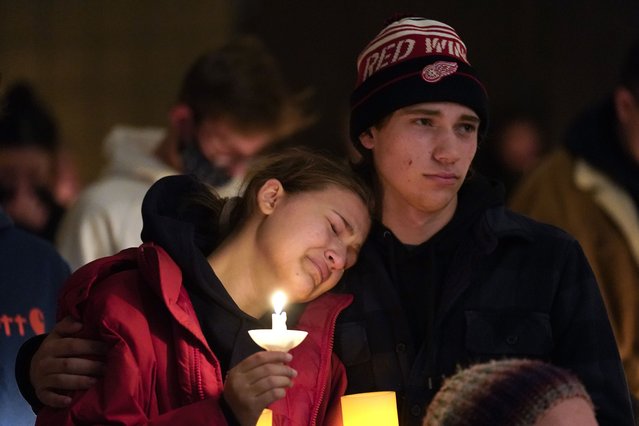 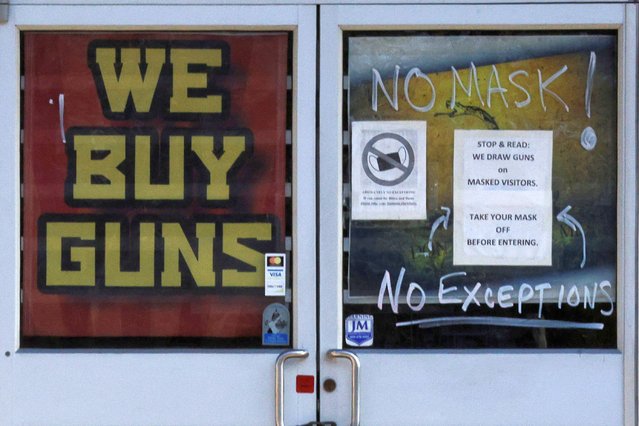 A sign on the door warning customers not to wear a face mask reads “We Draw Guns on Masked Visitors” at the 619DW Guns and Ammo store amid the coronavirus disease (COVID-19) pandemic in Merrimack, New Hampshire, U.S., November 29, 2021. (Photo by Brian Snyder/Reuters) 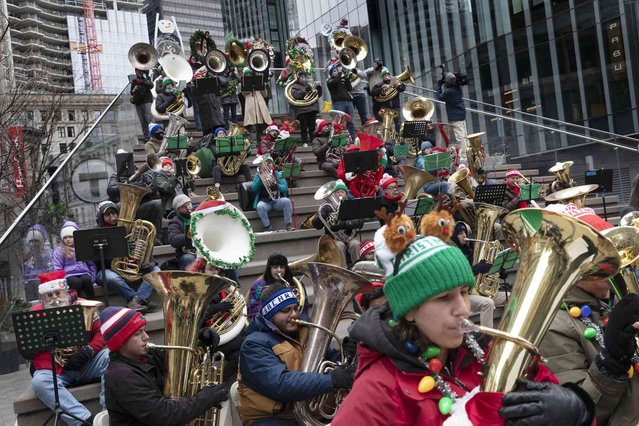 Dozens of tuba musicians play Christmas music, Sunday, November 28, 2021, at Downtown Crossing in Boston. Boston's TubaChristmas has been happening for more than 40 years. It is one of more than 180 such celebrations throughout North America this year. (Photo by Michael Dwyer/AP Photo) 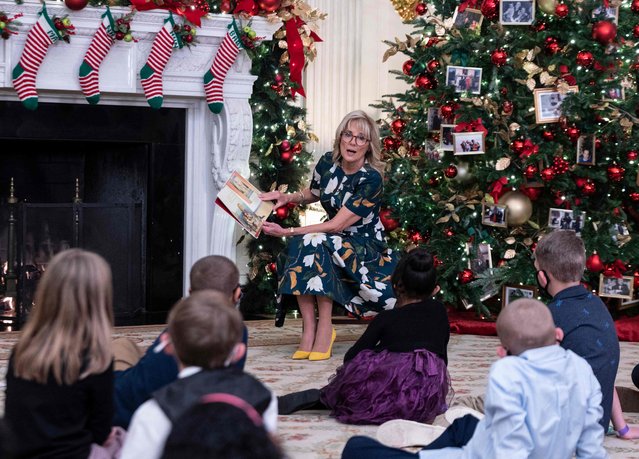 US First Lady Jill Biden reads to students from Malcolm Elementary School, from Waldorf, Maryland, during an event in the State Dining Room at the White House in Washington, DC on November 29, 2021. (Photo by Andrew Caballero-Reynolds/AFP Photo) 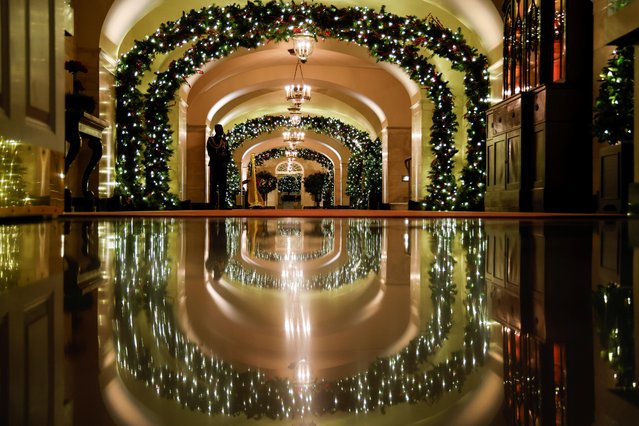 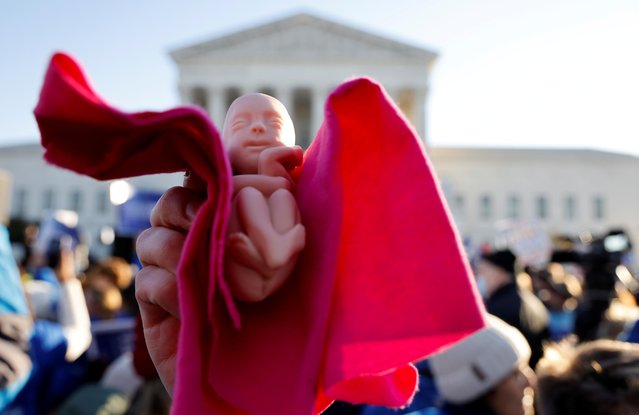 An anti-abortion rights activist holds a baby doll during a protest outside the Supreme Court building, ahead of arguments in the Mississippi abortion rights case Dobbs v. Jackson Women's Health, in Washington, U.S., December 1, 2021. (Photo by Jonathan Ernst/Reuters) 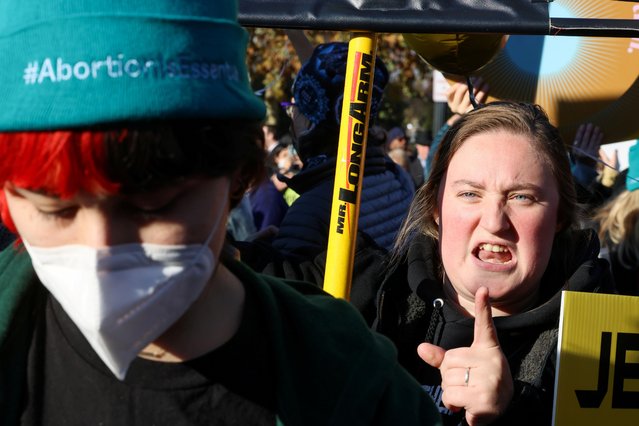 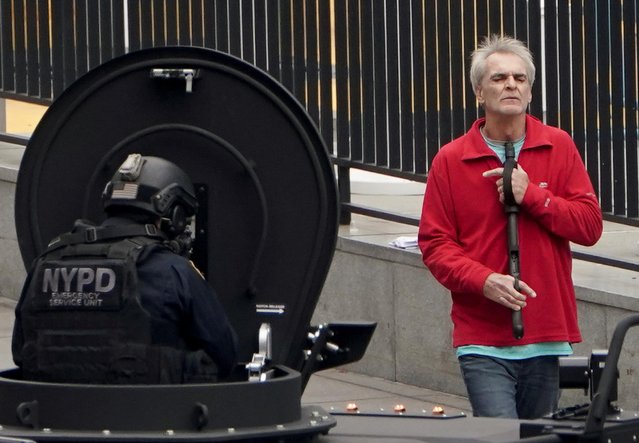 A man holds a gun under his chin as he speaks with members of the NYPD outside the United Nations Headquarters in New York City, U.S., December 2, 2021. (Photo by Carlo Allegri/Reuters) 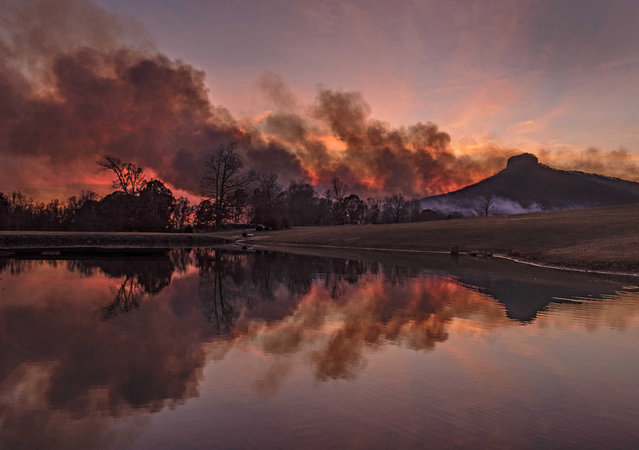 Smoke from the Pilot Mountain State Park wildfire is reflected in a private pond east of the park at sunset, Monday, November 29, 2021, in North Carolina. The fire, which was reported to have started Saturday, has burned more than 500 acres as of Monday night and is expected to burn more as foresters set back fires to protect houses below the mountain. (Photo by Walt Unks/The Winston-Salem Journal via AP Photo) 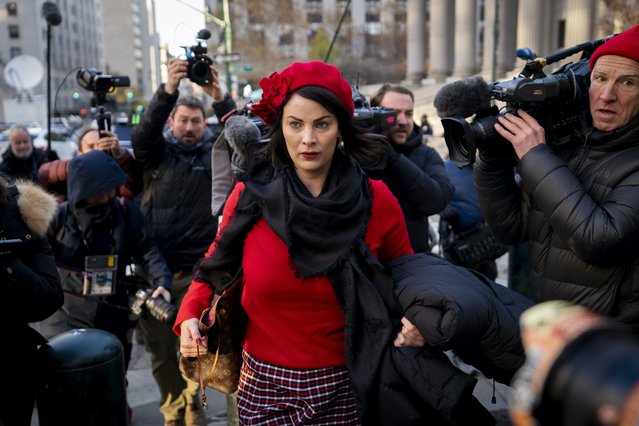 Sarah Ransome, an alleged victim of Jeffrey Epstein and Ghislaine Maxwell, arrives to the courthouse for the start of Maxwell's trial in New York, Monday, November 29, 2021. Maxwell, who once dated the financier – is accused of acting as Epstein's chief enabler, recruiting and grooming young girls for him to abuse. (Photo by John Minchillo/AP Photo) 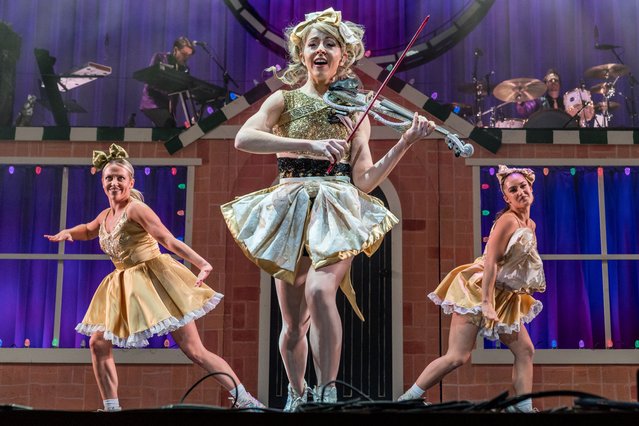 Violinist Lindsey Stirling performs at her Christmas Program Opening Night st the Cannon Center for the Performing Arts in Tennessee, USA on November 26, 2021. (Photo by Paul A. Hebert/LiveMusicToday/Rex Features/Shutterstock) 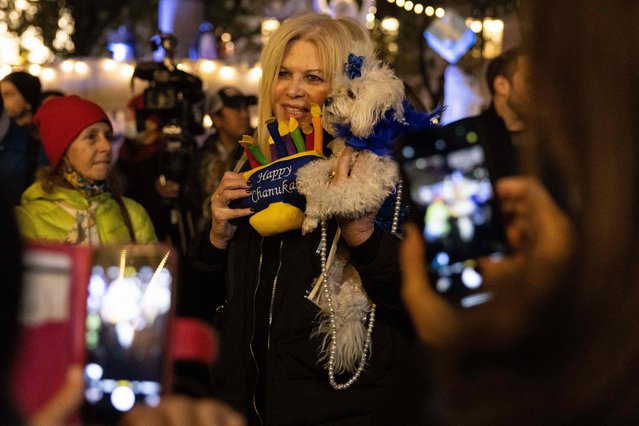 A woman holds her dog and a toy reading “Happy Hanukkah” in front of the world's largest Hanukkah menorah during the celebration of the first night of Hanukkah in New York City, New York, November 28, 2021. (Photo by Yuki Iwamura/AFP Photo) 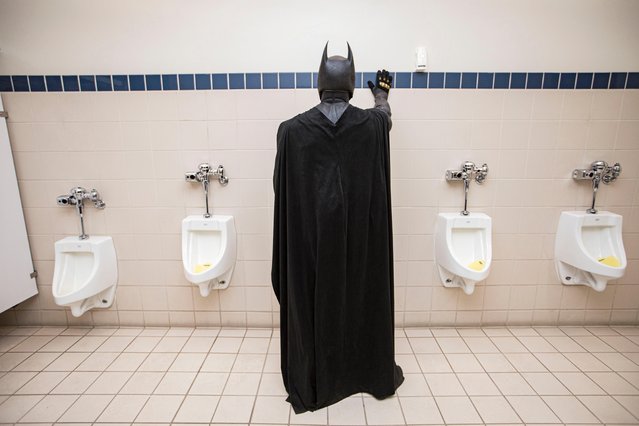 Cosplayer Shawn Richter as Batman poses for photos at 2021 Comic-Con: Special Edition on November 27, 2021 in San Diego, California. Comic-Con International was not held in 2020 or the summer of 2021 due to the ongoing Coronavirus pandemic. (Photo by Daniel Knighton/Getty Images) 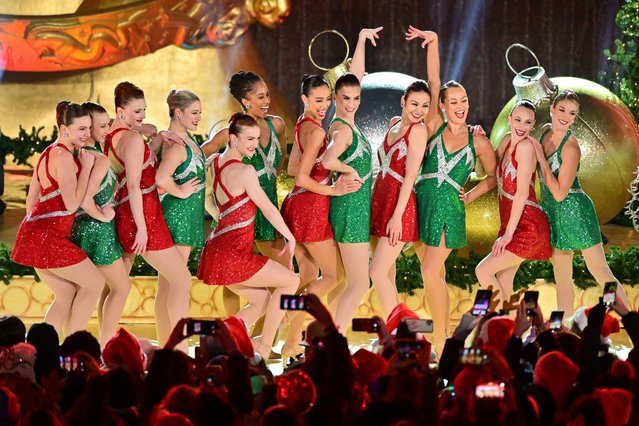 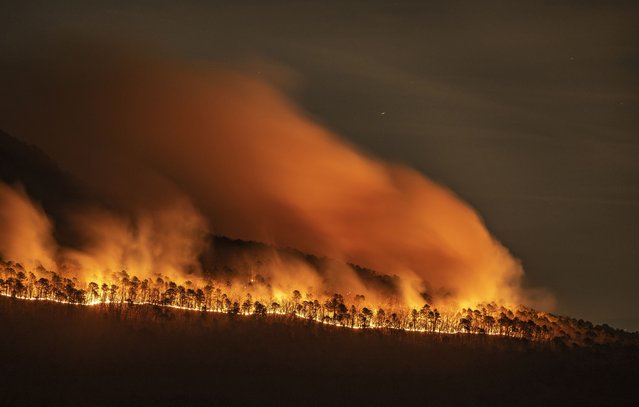 Fire burns along the western ridge of Pilot Mountain, Monday evening, November 29, 2021, in North Carolina. The fire, which was reported to have started Saturday night, has burned more than 500 acres as of Monday night and is expected to burn 900 as foresters set back fires to protect houses below the mountain. (Photo by Walt Unks/The Winston-Salem Journal via AP Photo) 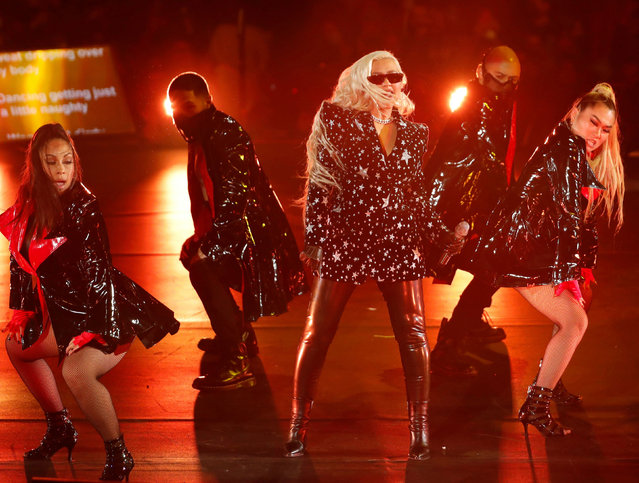 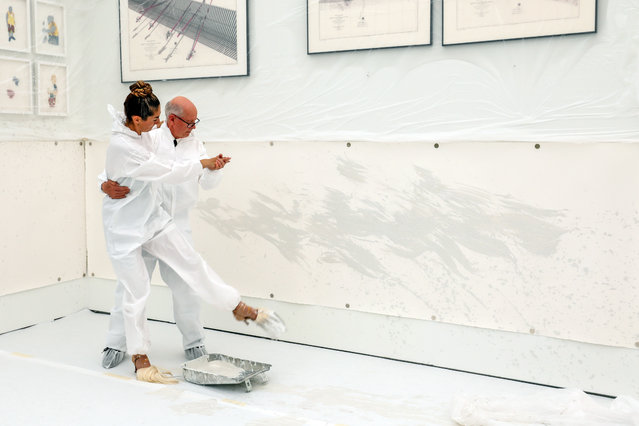 The Mexican artist Ana Teresa Fernandez (L) with the help of her assistant (R) (unnamed), executes her work “Silver Line” that is part of the installation “Drawn Together” in Miami Beach, Florida, USA, 29 November 2021. (Photo by Giorgio Viera/EPA/EFE) 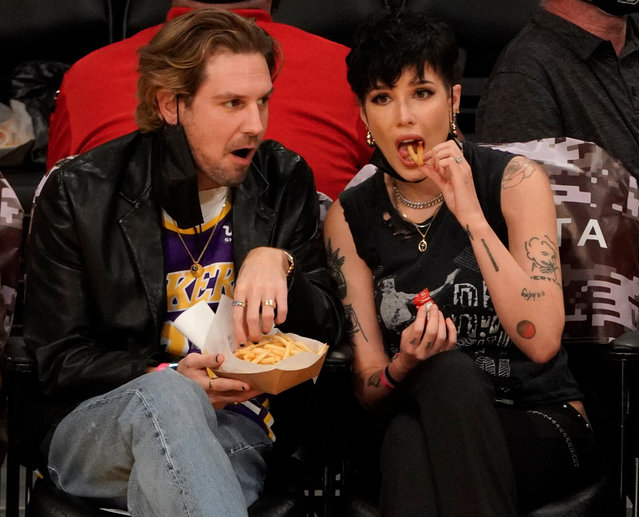 Singer Halsey and boyfriend Alev Aydin attends a game between the Detroit Pistons and Los Angeles Lakers on November 28, 2021 at STAPLES Center in Los Angeles. (Photo by London Entertainment/Splash News and Pictures) 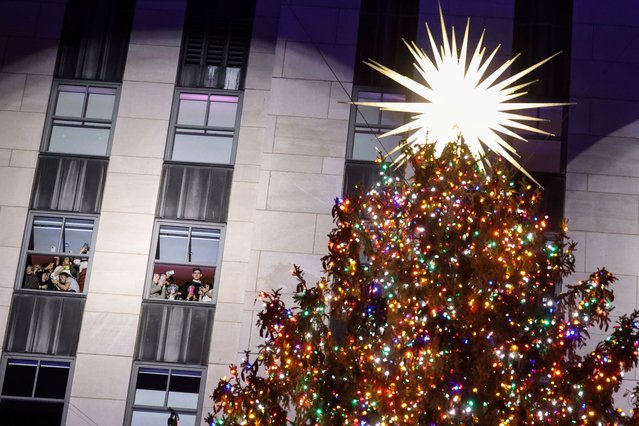