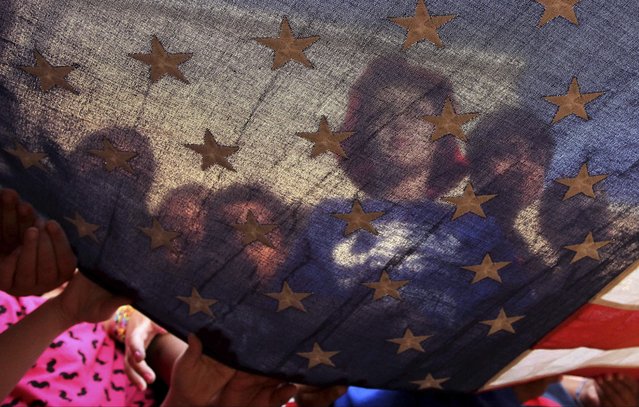 In this Wednesday, September 11, 2013 file photo, Kellen Savoy, center, helps present the colors as students raise the flag at William Lloyd Meador Elementary School in Willis, Texas. Students and teachers gathered before school to raise the flag to half staff to mark the 12th anniversary of the Sept. 11, 2001 terrorist attacks. (Photo by Jason Fochtman/Conroe Courier via AP Photo) 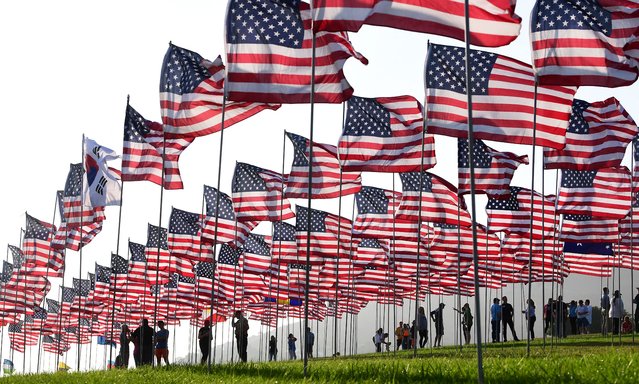 People help with the display of US flags to commemorate the 20th anniversary of 9/11 with the annual Waves of Flags display and remembrance at Pepperdine University in Malibu, California on September 8, 2021. For the fourteenth year, the university situated next to the Pacific Coast Highway along the Pacific Ocean, is commemorating the event by flying some 3,000 American flags, including international flags for each foreign country that lost a citizen in the attack. (Photo by Frederic J. Brown/AFP Photo) 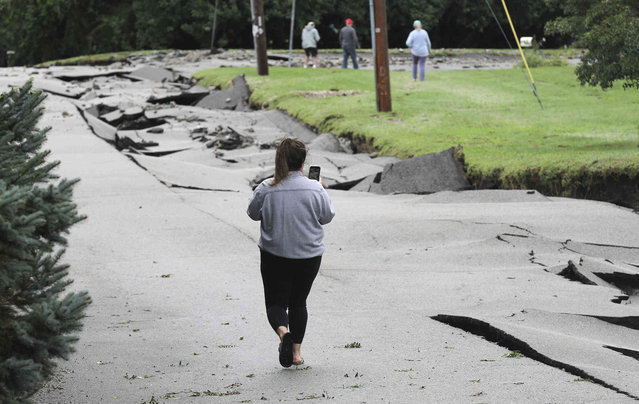 A woman takes video of the severely damaged roadway, Thursday, Sepember 2, 2021, along Fairview Lane, in Portsmouth, R.I., after the remnants of Hurricane Ida passed through the area. (Photo by Scott Barrett/The Newport Daily News/USA Today Network via AP Photo) 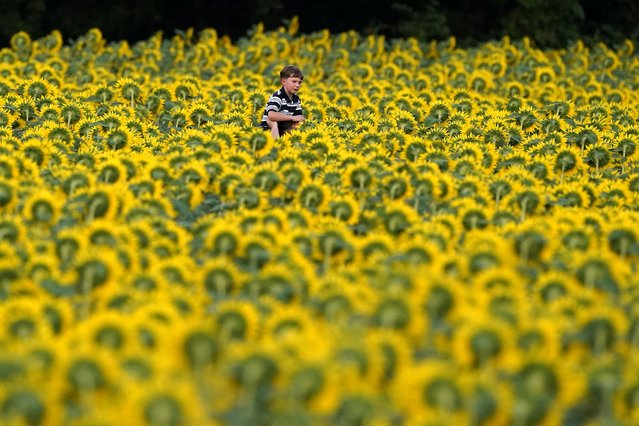 A boy gets a ride on a man's shoulders as they walk through a sunflower field at Grinter Farms, Monday, September 6, 2021, near Lawrence, Kan. The field, planted annually by the Grinter family, draws thousands of visitors during the weeklong late summer blossoming of the flowers. (Photo by Charlie Riedel/AP Photo) 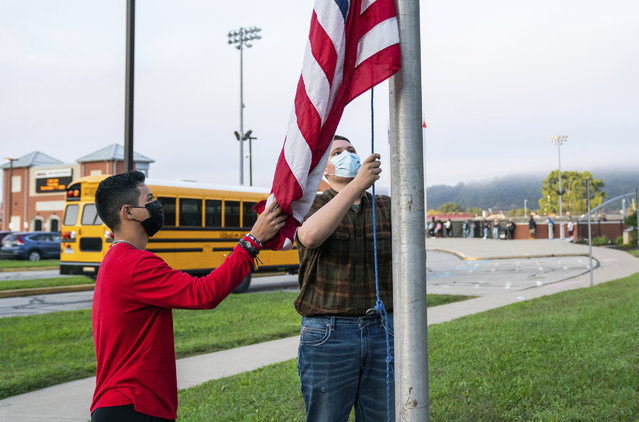 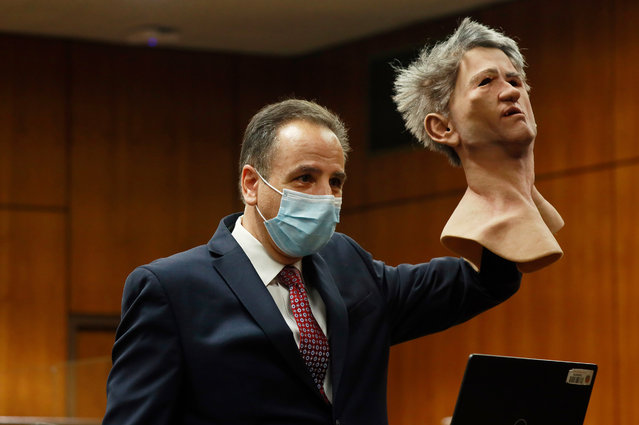 Deputy District Attorney Habib A. Balian holds a rubber latex mask, donned by Robert Durst when police arrested him along with a fake ID and more than $42000 in cash as the prosecution begins the first closing arguments before the jury in the Robert Durst trial for murder as the New York real estate scion who is charged with the longtime friend Susan Bermans killing in Benedict Canyon just before Christmas Eve 2000. Inglewood Courthouse on Wednesday, Sept. 8, 2021 in Inglewood, CA. (Al Seib / Los Angeles Times via Getty Images) 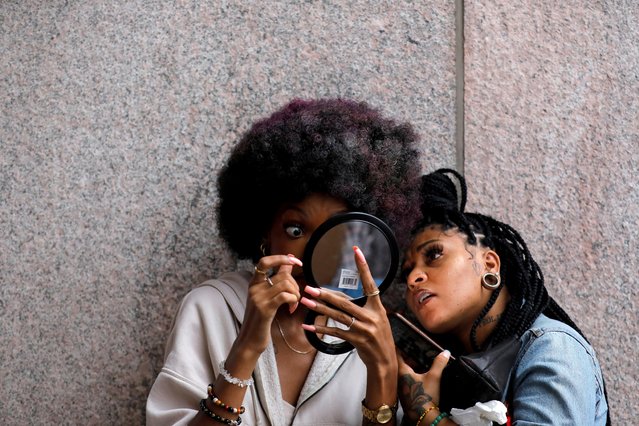 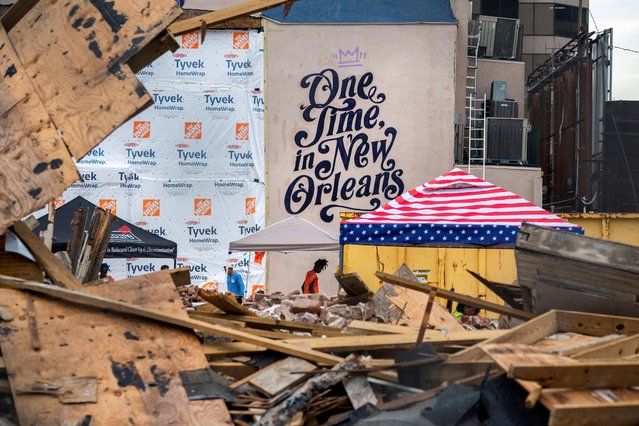 Workers clean up the site of the Historic Karnofsky Shop, a historic, building that collapsed during Hurricane Ida in New Orleans, Louisiana, U.S., September 6, 2021. (Photo by Kathleen Flynn/Reuters) 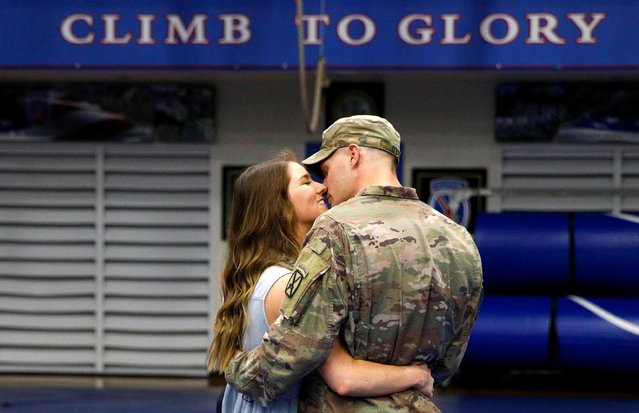 Cpl Preston Dyce, a soldier with the 4th Battalion, 31st Infantry Regiment, 2nd Brigade Combat Team of the 10th Mountain Division, is greeted by his wife Michaela Dyce upon his return home from deployment in Afghanistan, at Fort Drum, New York, September 6, 2021. (Photo by Brendan McDermid/Reuters) 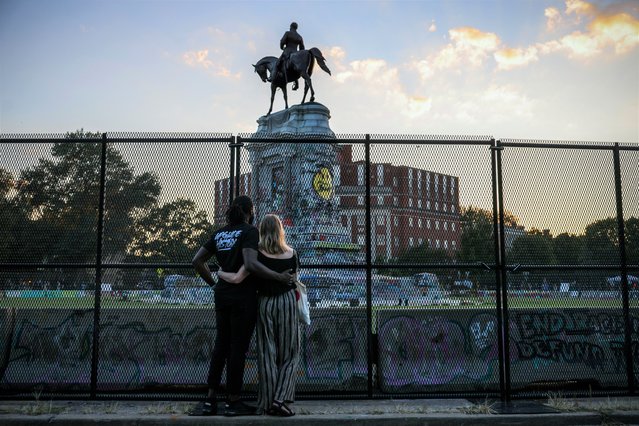 Richmond residents look at the statue of Confederate General Robert E. Lee, the largest Confederate statue remaining in the United States, the day before the monument will be removed in Richmond, Virginia, U.S., September 7, 2021. (Photo by Evelyn Hockstein/Reuters) 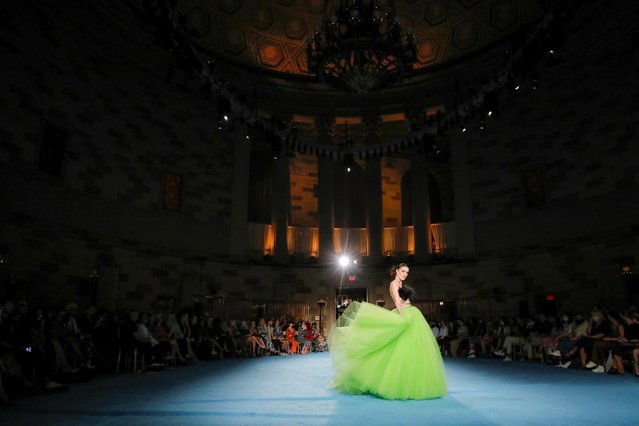 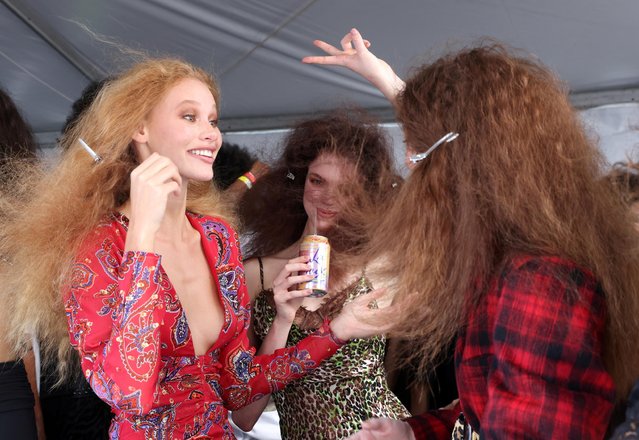 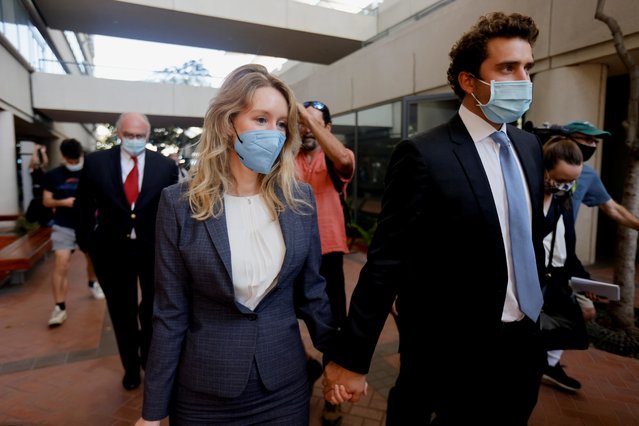 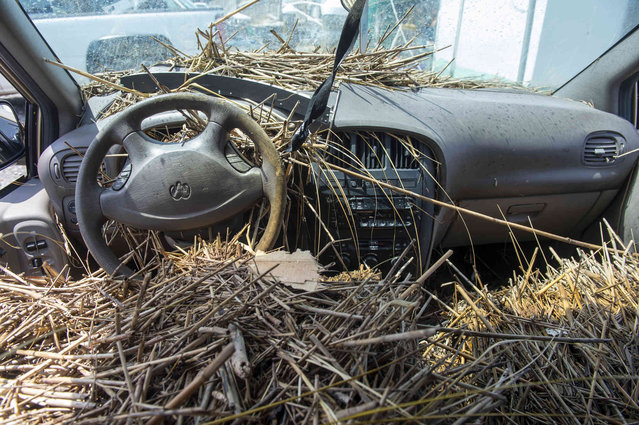 An abandoned car is seen full of marsh grass along Highway 23 in Plaquemines Parish, La., over a week after Hurricane Ida on Tuesday, September 7, 2021. (Photo by Chris Granger/The Times-Picayune/The New Orleans Advocate via AP Photo) 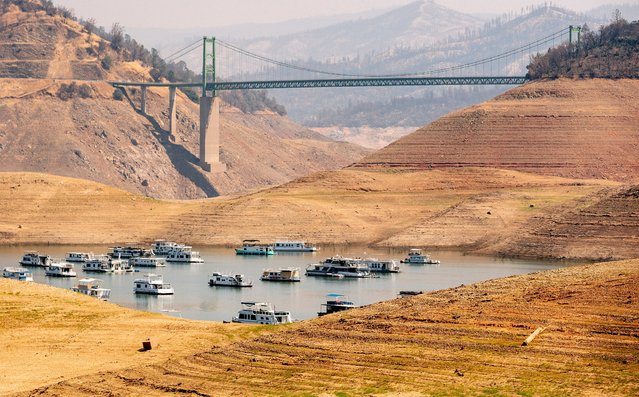 Houseboats sit in a narrow section of water in a depleted Lake Oroville in Oroville, California on September 5, 2021. Lake Oroville is currently at 23% of its capacity and is suffering from extreme levels of drought. Much of California in the western US is currently gripped by excessive heat, severe drought and a series of massive wildfires. (Photo by Josh Edelson/AFP Photo) 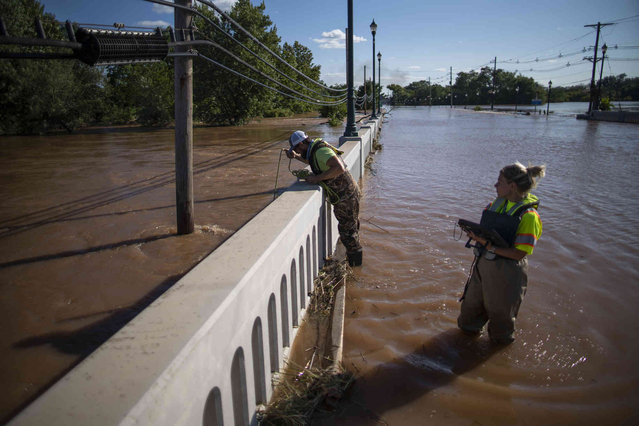 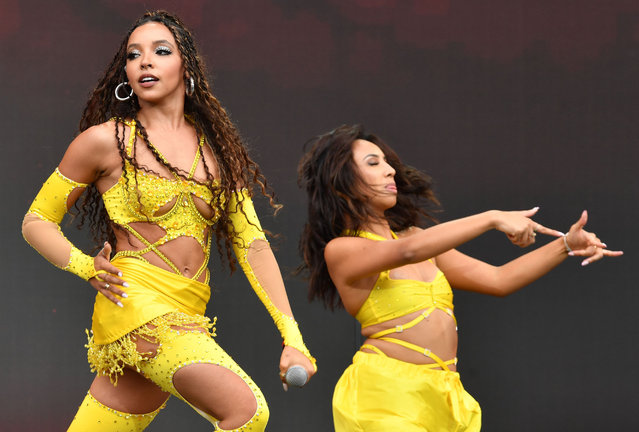 Tinashe Jorgensen Kachingwe, known mononymously as Tinashe performs during 2021 Made In America at Benjamin Franklin Parkway on September 05, 2021 in Philadelphia, Pennsylvania. (Photo by Stephen Lovekin/Rex Features/Shutterstock) 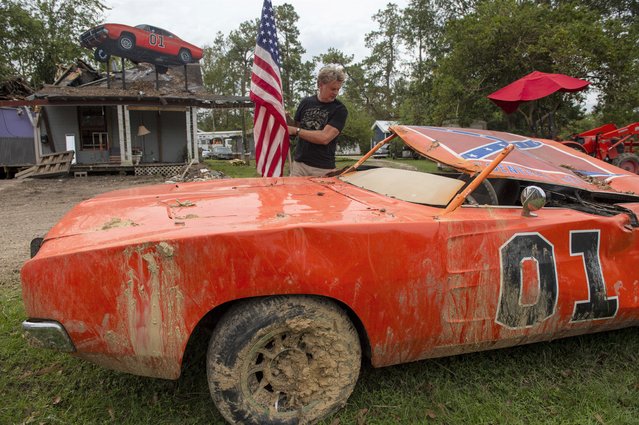 Actor John Schneider, who starred in the television show “The Dukes of Hazzard”, places an American flag on his “General Lee” car on Monday, September 6, 2021, that was destroyed by Hurricane Ida. The car was made famous during the show which aired in the early eighties. (Photo by Chris Granger/AP Photo) 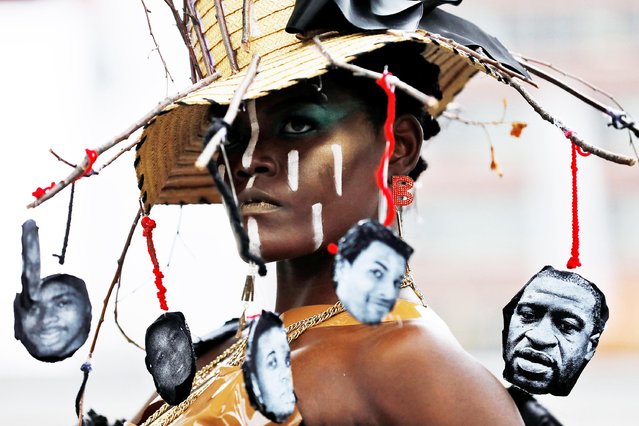 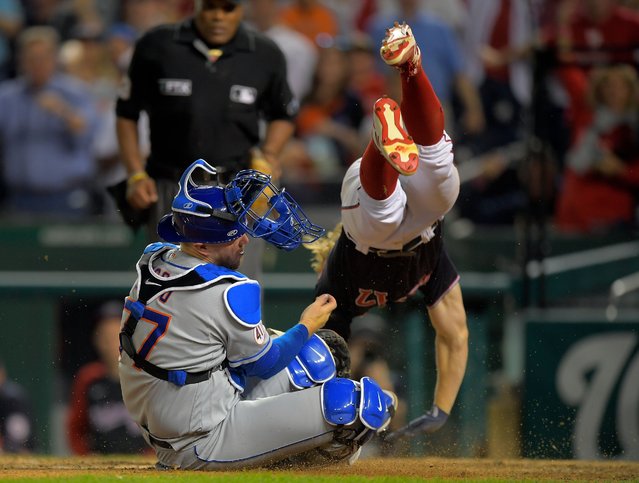 Washington Nationals fielder Andrew Stevenson (17), right is safe at home after colliding with New York Mets catcher Chance Sisco (77) to tie the score at 2 in the bottom of the 9th inning to send the game into extra innings during a game between the Washington Washington Nationals and theNew York Mets at Nationals Park in Washington, DC on September 3, 2021. (Photo by John McDonnell/The Washington Post)
Edit Del
13 Sep 2021 07:17:00, post received 0 comments
Publication archive:
←   →
Popular tags:
All tags
Last searches: