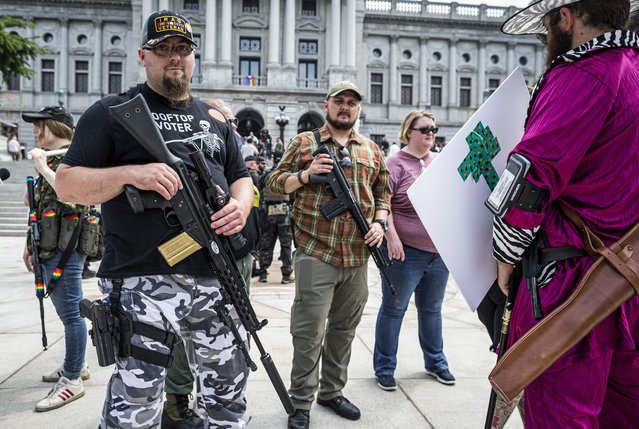 The annual “Rally to Protect Your Right to Keep and Bear Arms” is held at the state Capitol in Harrisburg, Pa., Monday, June 7, 2021. (Photo by Dan Gleiter/The Patriot-News via AP Photo) 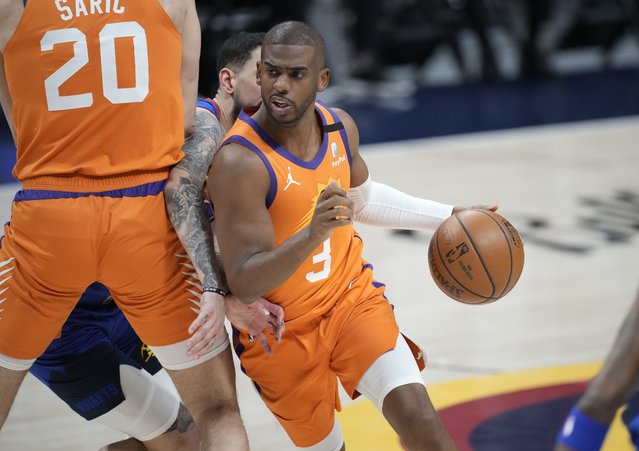 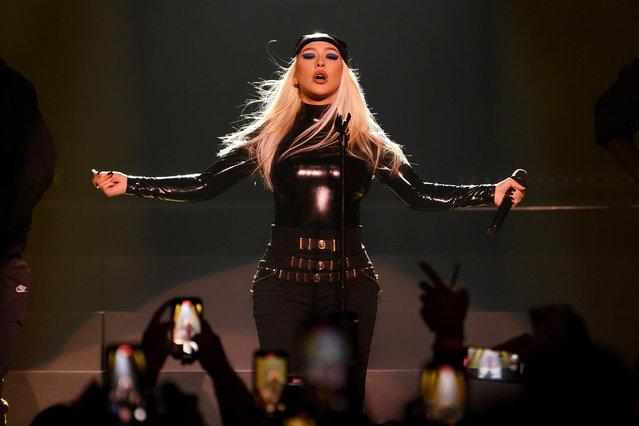 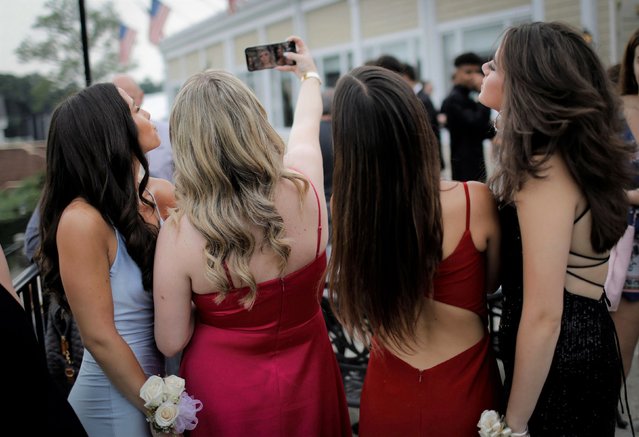 Young women take a selfie photograph in their prom dresses at a pre-prom gathering before the Dwight Englewood School senior prom at the Knickerbocker Country Club in Tenafly, New Jersey, U.S., June 7, 2021. (Photo by Mike Segar/Reuters) 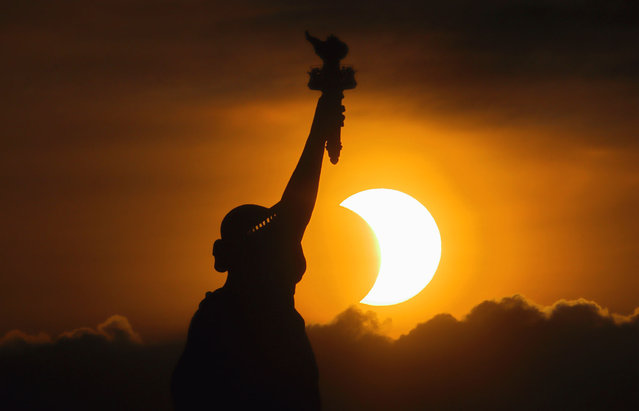 The sun rises next to the Statue of Liberty during an annular eclipse on June 10, 2021 in New York City. Northeast states in the U.S. saw a rare eclipsed sunrise, while in other parts of the Northern Hemisphere, this annular eclipse will be seen as a visible thin outer ring of the sun's disk that is not completely covered by the smaller dark disk of the moon, a so-called “ring of fire”. (Photo by Gary Hershorn/Getty Images) 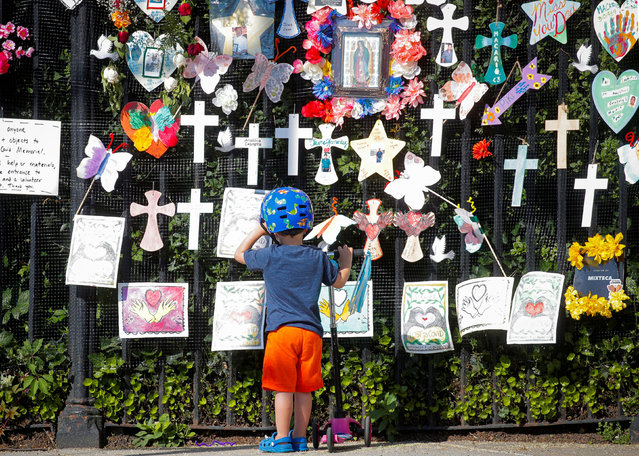 A child looks at the “Naming the Lost Memorials”, as the U.S. deaths from the coronavirus disease (COVID-19) are expected to surpass 600,000, at The Green-Wood Cemetery in Brooklyn, New York, U.S., June 10, 2021. (Photo by Brendan McDermid/Reuters) 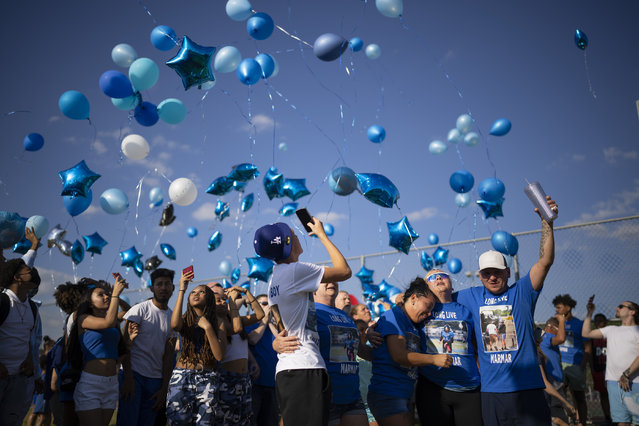 Demaris Hobbs-Ekdahl's mother, Trisha Eckdahl, center, releases balloons along with her sister Katie Eckdahl and brother Jeff Eckdahl, right, at Richard Walton Memorial Park in Oakdale, Minn., Sunday, June 6, 2021, to honor his memory a day after he was killed by gunfire while attending a graduation party with his brother. With them was her son's best friend, Michael Pflepsen, left, and his grandmother Penny Eckdahl. (Photo by Jeff Wheeler/Star Tribune via AP Photo) 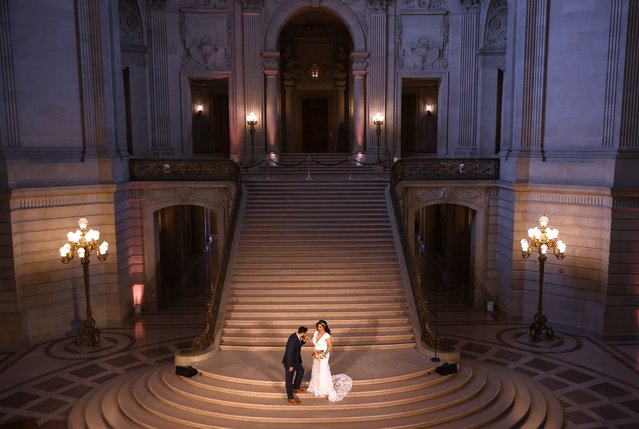 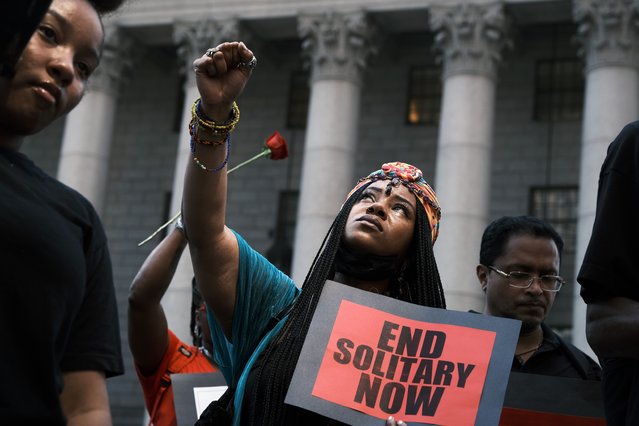 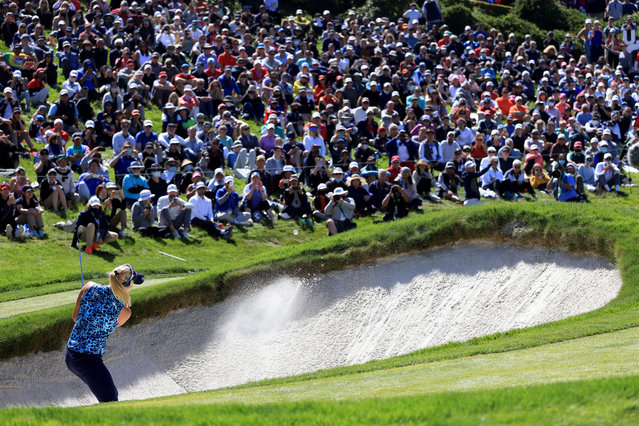 Lexi Thompson of the United States hits from the bunker on the 18th hole during the final round of the 76th U.S. Women's Open Championship at The Olympic Club on June 06, 2021 in San Francisco, California. (Photo by Sean M. Haffey/Getty Images) 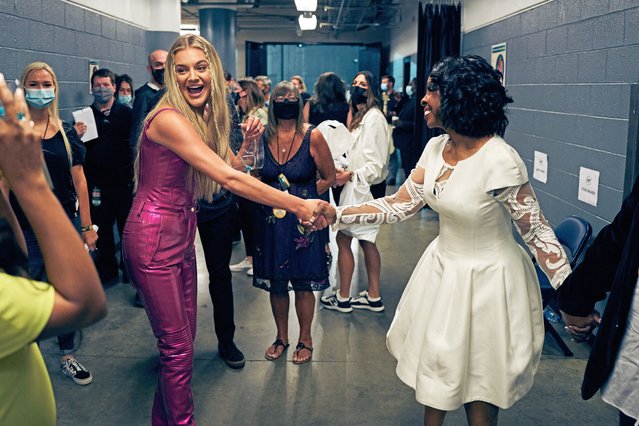 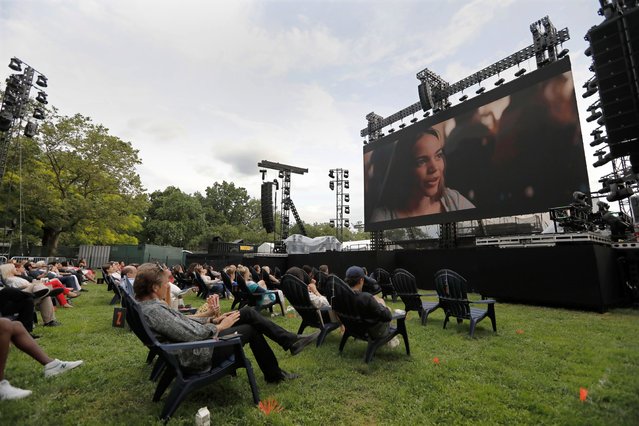 Moviegoers watch the film “In The Heights” during the Opening Night of the 2021 Tribeca Film Festival at The Battery, in New Yor​k, New York, USA, 09 June 2021. (Photo by Peter Foley/EPA/EFE) 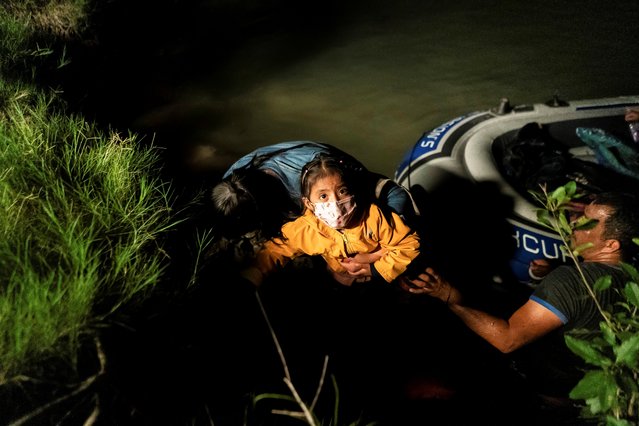 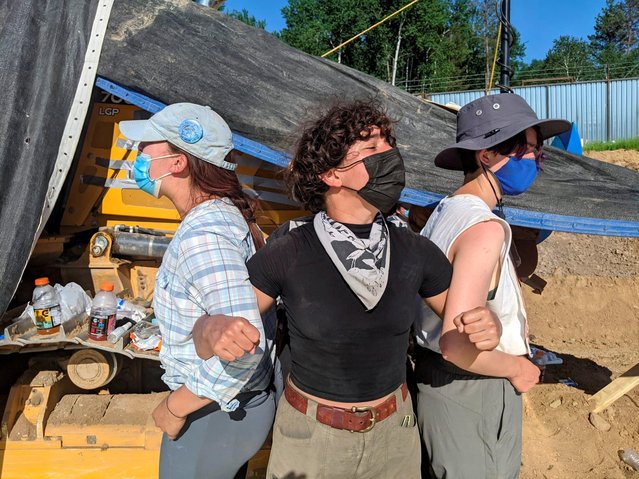 Demonstrators lock themselves to Enbridge equipment during a protest against the Line 3 pipeline at a pumping station in Hubbard County, Minnesota, June 7, 2021. Environmental protesters clashed with police after occupying a pump station as they rallied against the crude oil pipeline in Minnesota, while Enbridge said it had evacuated 44 workers from its site. (Photo by Nicholas Pfosi/Reuters) 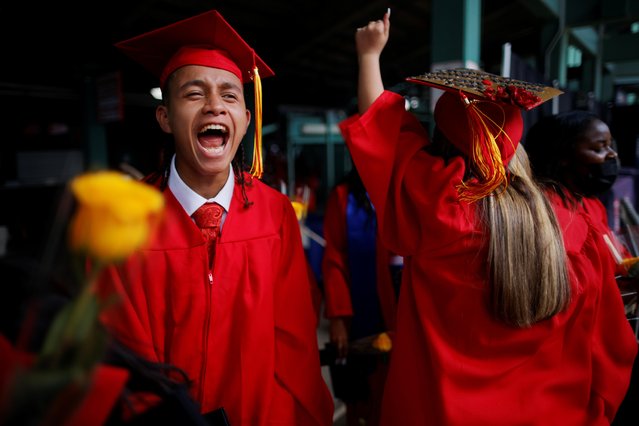 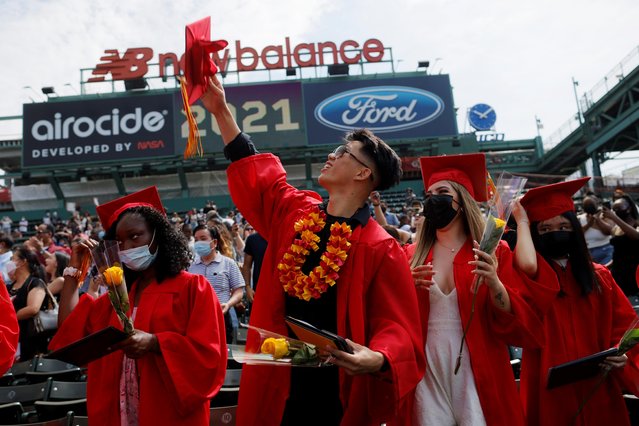 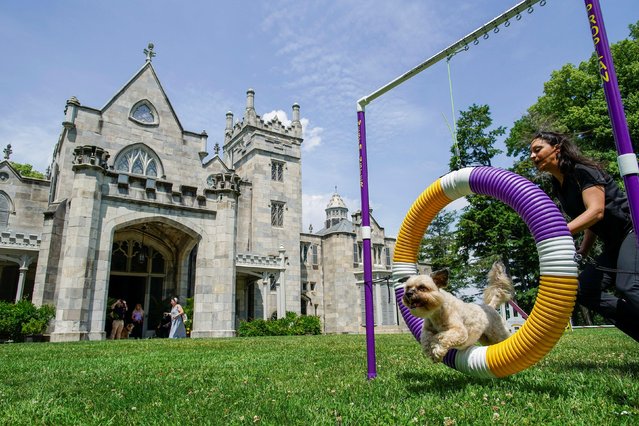 An “All-American Dog” jumps through a hoop in the Agility demonstration during the press preview ahead of the 145th Westminster Kennel Club Dog Show at Lyndhurst Mansion in Tarrytown, New York, U.S., June 8, 2021. (Photo by Eduardo Munoz/Reuters) 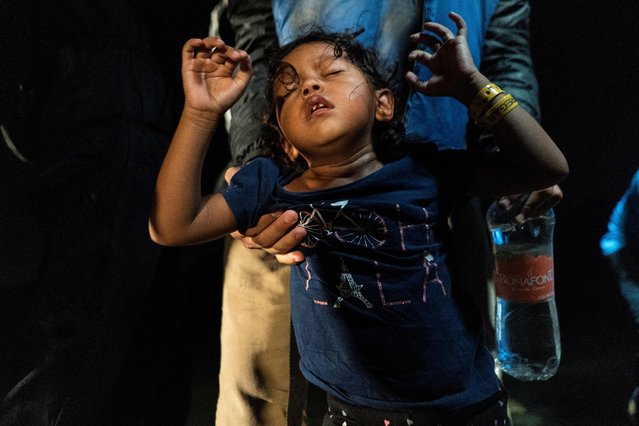 An asylum-seeking migrant child from Honduras reacts as disembarking an inflatable raft after crossing the Rio Grande river into the United States from Mexico in Roma, Texas, U.S., June 8, 2021. (Photo by Go Nakamura/Reuters) 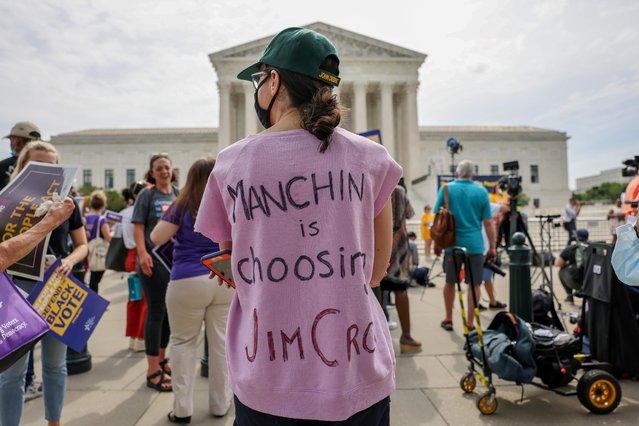 A rally outside the Supreme Court in support of the For the People Act, calling on the Senate to pass a sweeping voting rights bill that would expand access to voting across the United Sates, in Washington, June 9, 2021. (Photo by Evelyn Hockstein/Reuters)
Edit Del
15 Jun 2021 08:26:00, post received 0 comments
Publication archive:
←   →
Popular tags:
All tags
Last searches: