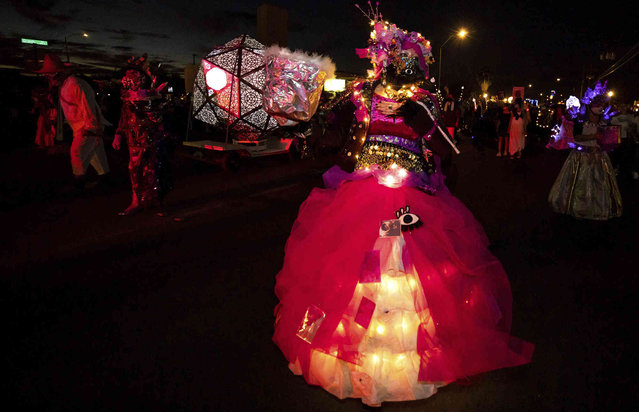 Attendants walk alongside an urn, background left, containing messages for loved ones who have died during the 32nd Annual All Souls Procession in Tucson, Ariz. on November 7, 2021. The procession returned to an in-person event after a year off due to the coronavirus pandemic. The event has grown dramatically since 1990, when Tucson artist Susan Johnson was searching for a way to honor her father and work through her grief after his death. She was joined by about 25 people. The event is not associated with All Hallow's Eve (Halloween) or Dia de los Muertos (Day of the Dead), though procession participants sometimes borrow symbolism from those traditional events. (Photo by Mamta Popat/Arizona Daily Star via AP Photo) 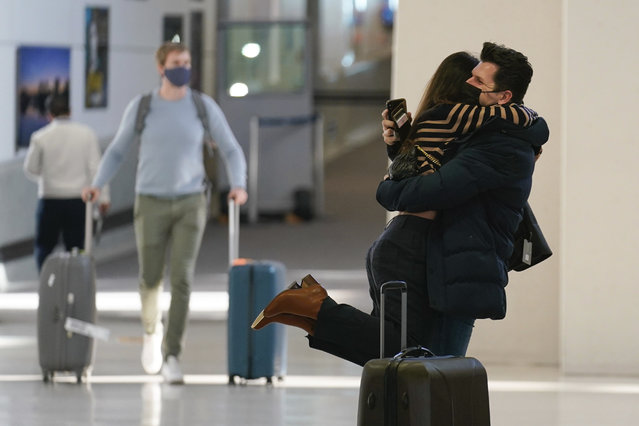 Natalia Abrahao is lifted up by her fiancé Mark Ogertsehnig as they greet one another at Newark Liberty International Airport in Newark, N.J., Monday, November 8, 2021. Pandemic travel restrictions have made their recent meetings difficult and infrequent. The U.S. lifted restrictions Monday on travel from a long list of countries including Mexico, Canada and most of Europe, setting the stage for emotional reunions nearly two years in the making and providing a boost for the airline and tourism industries decimated by the pandemic. (Photo by Seth Wenig/AP Photo) 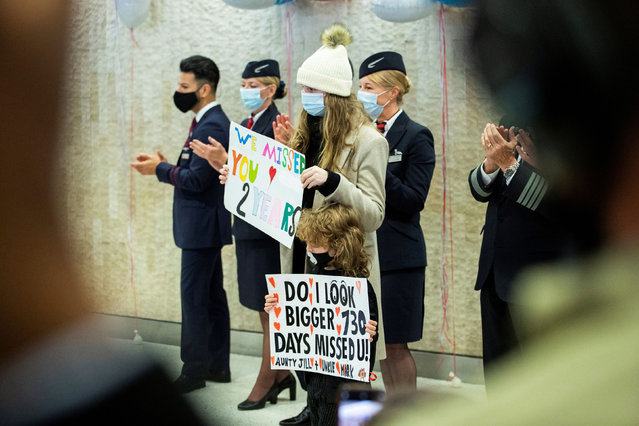 People wait for their relatives after the arrival of the British Airways flight at JFK International Airport in New York, U.S., November 8, 2021. (Photo by Eduardo Munoz/Reuters) 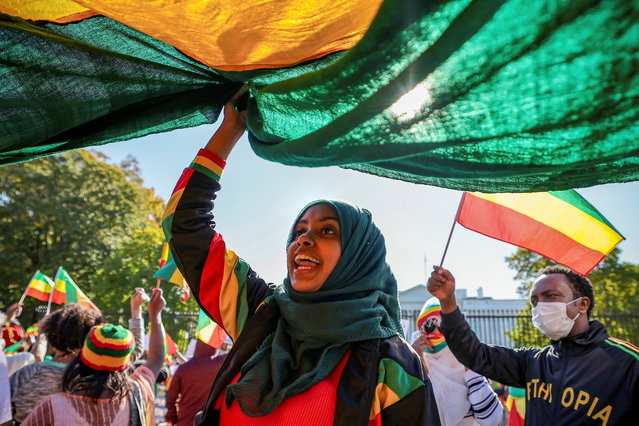 Demonstrators hold a protest to denounce the United States stance on the conflict in Ethiopia, outside the White House in Washington, U.S., November 8, 2021. (Photo by Evelyn Hockstein/Reuters) 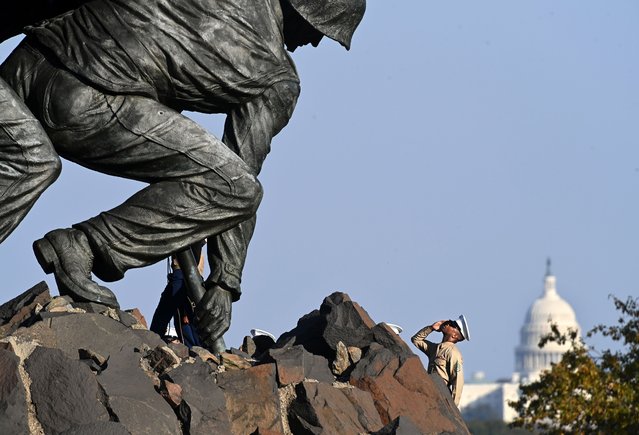 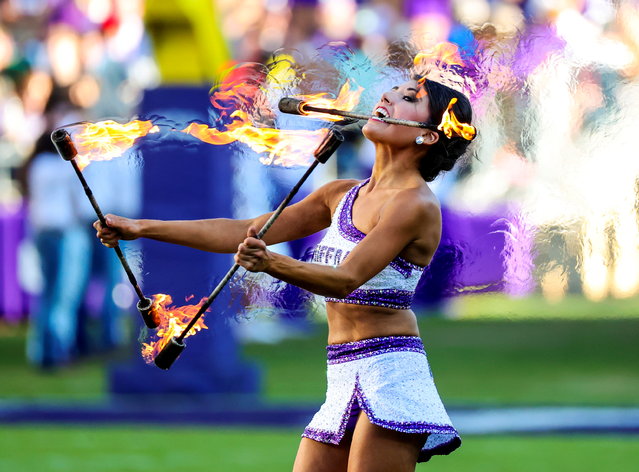 TCU Horned Frogs twirler performs at halftime of the game against the Baylor Bears at Amon G. Carter Stadium in Fort Worth, Texas, USA on November 6, 2021. (Photo by Kevin Jairaj/USA TODAY Sports) 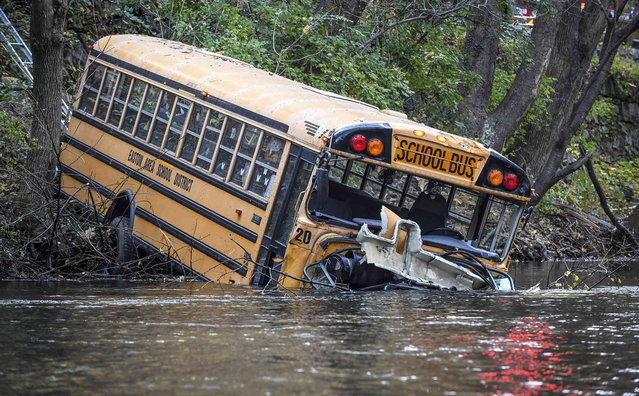 An eastern Pennsylvania school bus is shown after crashing into the Bushkill Creek in Easton, Pa., Monday, November 8, 2021. The school bus went off the road and ended up with its nose in a creek, sending the driver and eight students to hospitals, but no serious injuries were reported, authorities said. (Photo by Tim Wynkoop/The Express-Times via AP Photo) 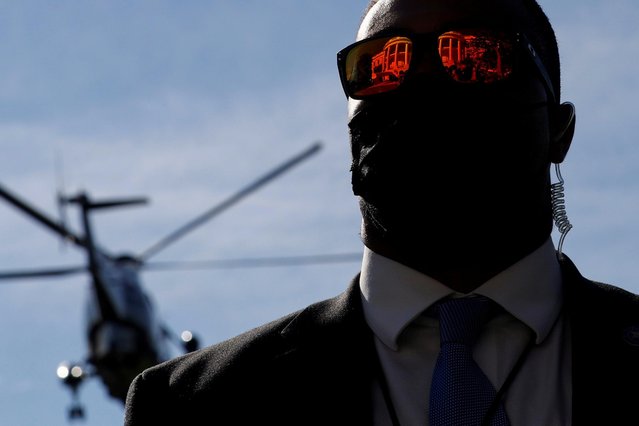 The facade of the White House is reflected in a Secret Service Agent’s glasses as U.S. President Joe Biden and first lady Jill Biden depart via the Marine One helicopter for travel to Delaware from the White House in Washington, U.S. November 6, 2021. (Photo by Jonathan Ernst/Reuters) 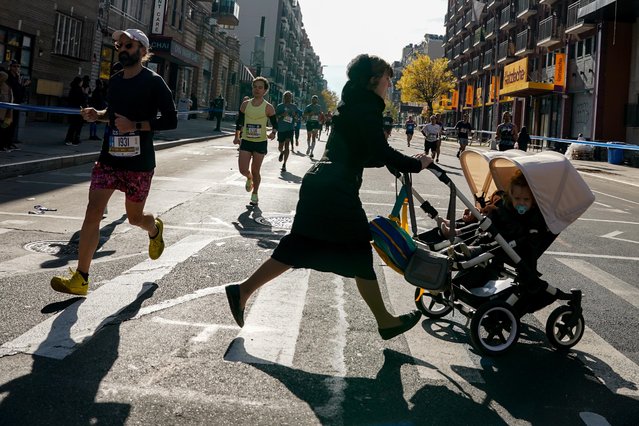 A lady attempts to cross the street as the New York City Marathon participants pass through the borough of Brooklyn in New York, United States on November 7, 2021. (Photo by David Dee Delgado/Reuters) 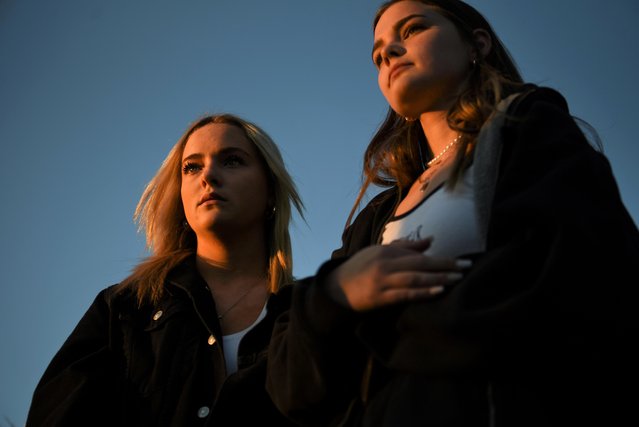 Lola Lindroos, 16, and Grace Williams, 17, speak to members of the media as people gather at a makeshift memorial for the concertgoers who died in a stampede during a Travis Scott performance at the 2021 Astroworld Festival in Houston, Texas, U.S., November 8, 2021. (Photo by Callaghan O'Hare/Reuters) 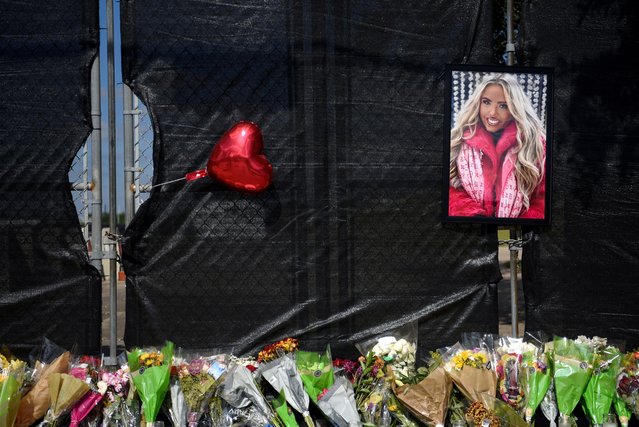 A makeshift memorial for the concertgoers who died in a stampede during a Travis Scott performance at the 2021 Astroworld Festival is seen in Houston, Texas, U.S., November 8, 2021. (Photo by Callaghan O'Hare/Reuters) 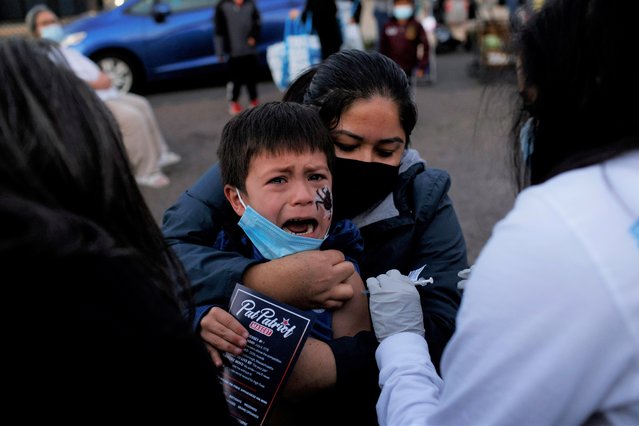 Five year-old Gerson Alejandro is held by his mother Rina while he gets his coronavirus disease (COVID-19) vaccine at a clinic at La Colaborativa, in Chelsea, Massachusetts, U.S., November 9, 2021. (Photo by Brian Snyder/Reuters) 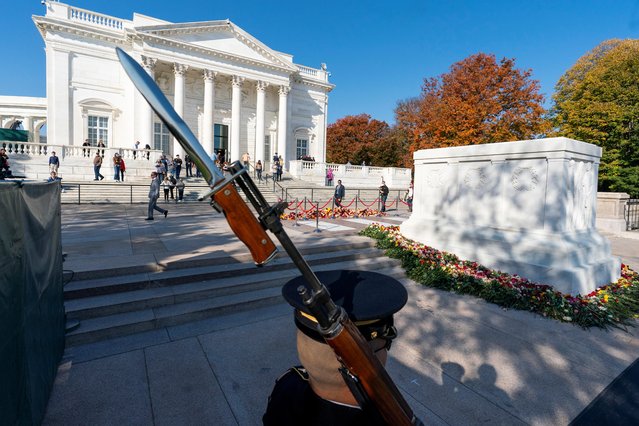 A tomb guard of the 3rd US Infantry Regiment, known as “The Old Guard”, stands during a centennial commemoration event at the Tomb of the Unknown Soldier, in Arlington National Cemetery on November 10, 2021, in Arlington, Virginia. (Photo by Alex Brandon/Pool via AFP Photo) 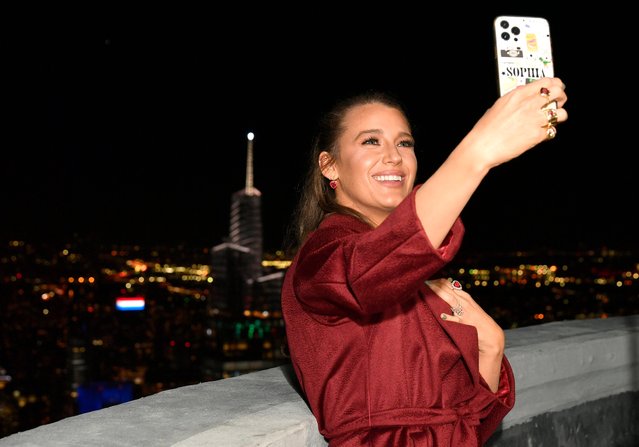 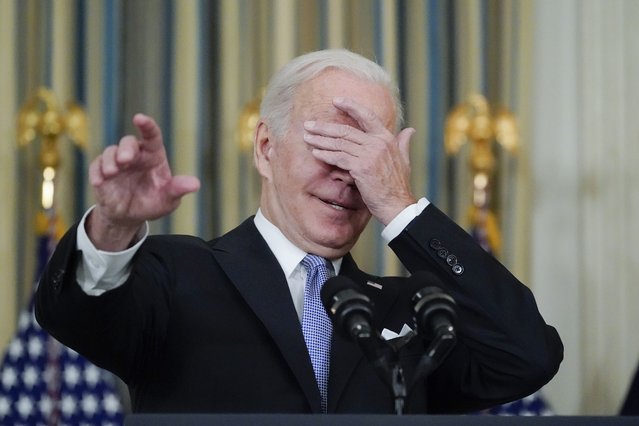 President Joe Biden jokes about which reporter to call on for a question as he speaks about the bipartisan infrastructure bill in the State Dinning Room of the White House, Saturday, November 6, 2021, in Washington. (Photo by Alex Brandon/AP Photo) 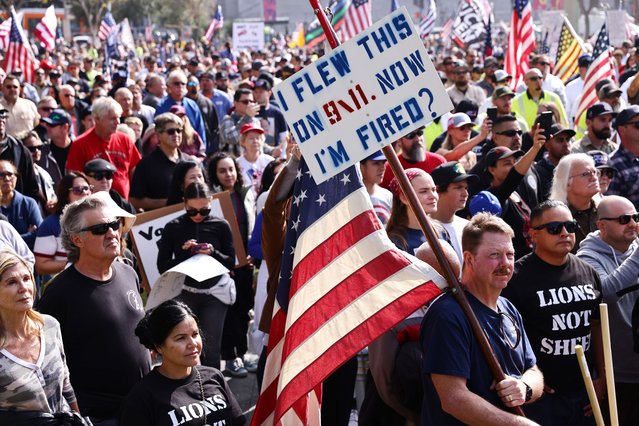 Protestors gather in Grand Park outside City Hall at a March for Freedom rally demonstrating against the L.A. City Council’s COVID-19 vaccine mandate for city employees and contractors on November 8, 2021 in Los Angeles, California. The City Council has set a deadline of December 18 for all city employees and contractors to be vaccinated except for those who have religious or medical exemptions. (Photo by Mario Tama/Getty Images) 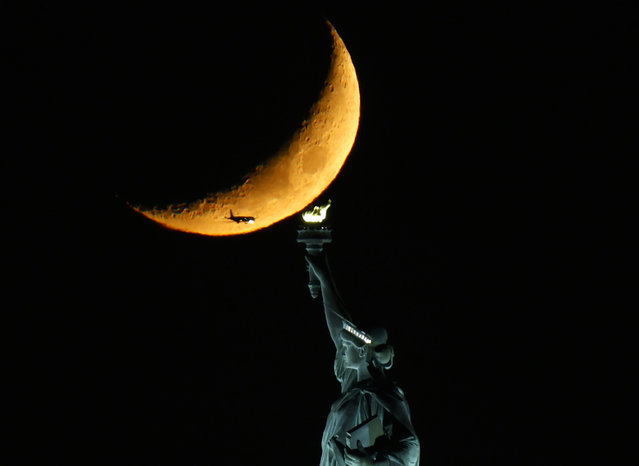 A Waxing Crescent Moon sets behind The Statue of Liberty on Monday, November 08, 2021 in New York City. (Photo by John Angelillo/UPI/Rex Features/Shutterstock) 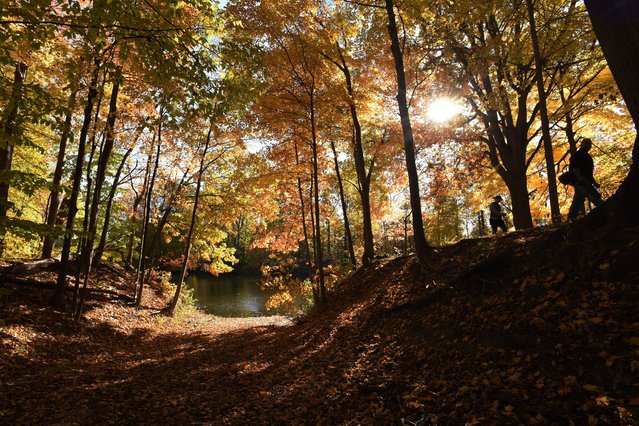 Hikers make their way through a canopy of fall color, Saturday, November 6, 2021, at Chikaming Township Park and Preserve in Three Oaks, Mich. (Photo by Don Campbell/The Herald-Palladium via AP Photo) 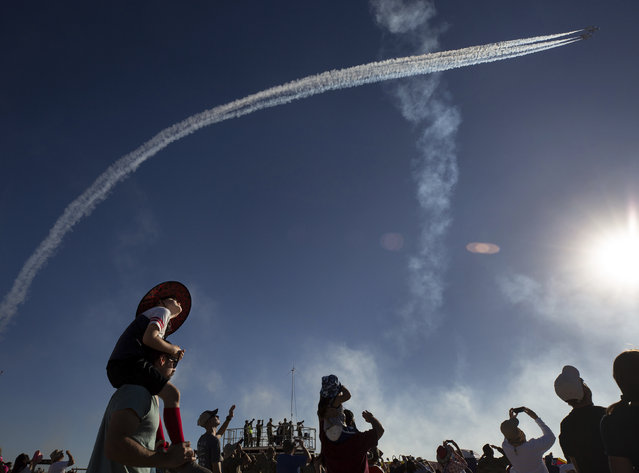 A boy squints while looking into the sun at the U.S. Air Force Thunderbirds at the Thunder & Lightning Over Arizona air show at Davis-Monthan Air Force Base, in Tucson, Ariz., Saturday, November 6, 2021. The show features dozens of aircraft flying and on display, from World War II to present day. (Photo by Rick Wiley/Arizona Daily Star via AP Photo) 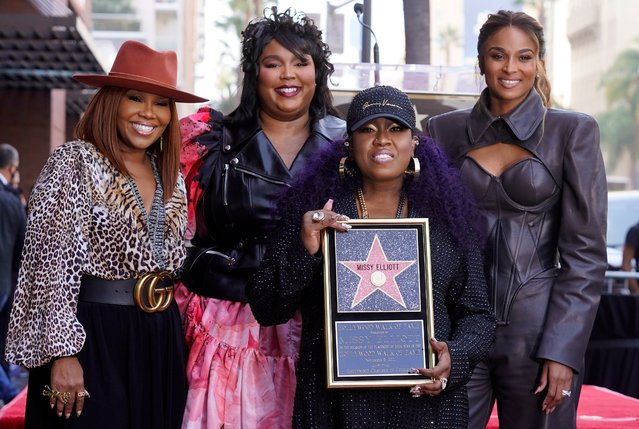 Hip hop artist Missy Elliott, second from right, poses with, from left, manager Mona Scott-Young and singers Lizzo and Ciara at a ceremony to award Elliott a star on the Hollywood Walk of Fame, Monday, November 8, 2021, in Los Angeles. (Photo by Chris Pizzello/AP Photo) 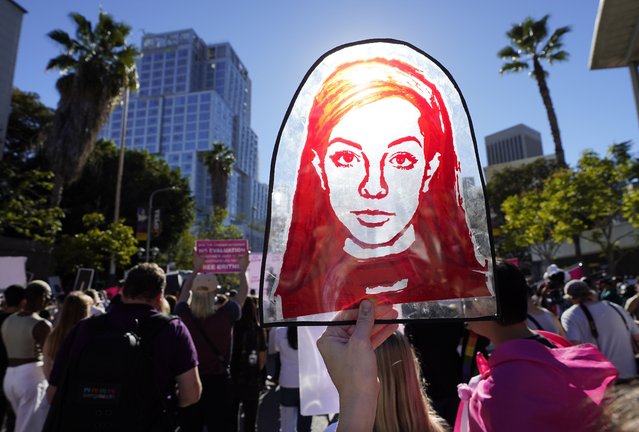