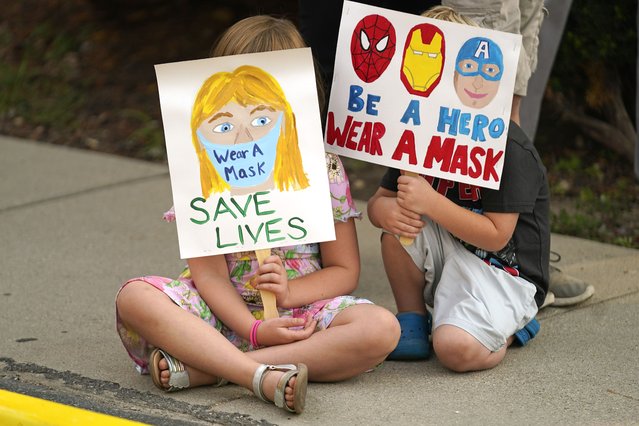 Lucie Phillips, 6, and her brother David Phillips, 3, join parents and students during a rally at Utah State School Board Office calling for mask mandate Friday, August 6, 2021, in Salt Lake City. The school year is days away for many kids in Utah and public health experts are worried about whether kids too young to get vaccinated will stay safe in school amid a wave of coronavirus cases. (Photo by Rick Bowmer/AP Photo) 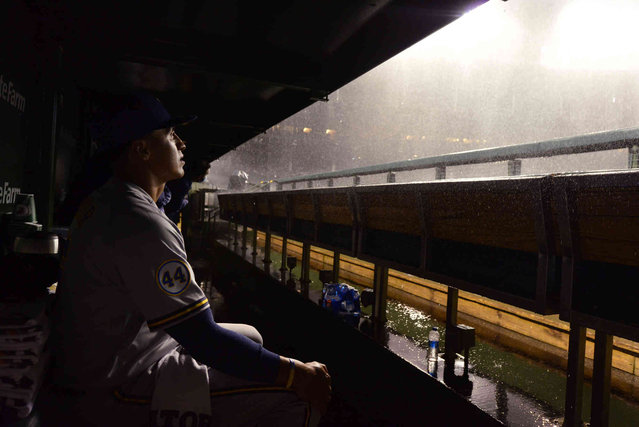 Milwaukee Brewers' Tyrone Taylor sits in the dugout, waiting out a thunderstorm during a rain delay in the team's baseball game against the Chicago Cubs on Tuesday, August 10, 2021, in Chicago. (Photo by Paul Beaty/AP Photo) 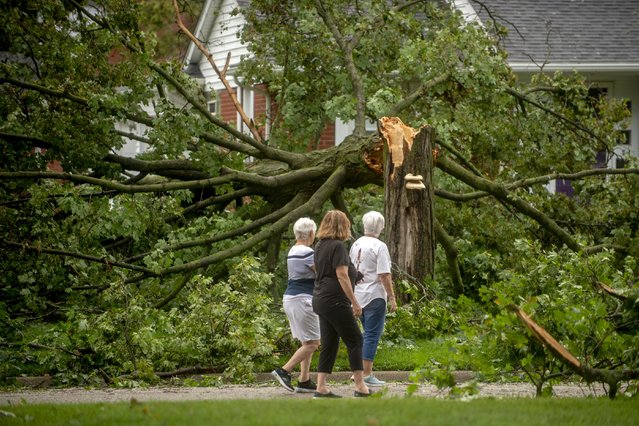 Flushing residents Donna Black, from left to right, Brenda Nyquist and Judy Doyle looks at the damage around their neighborhood as they check in with neighbors health and well-being on Thursday, August 12, 2021 in Flushing, Mich., after a wave of strong storms ravaged neighborhoods in parts of Genesee County on Wednesday night. Heavy rains are bringing flooding to parts of Michigan, as waves of thunderstorms make their way across the Midwest. (Photo by Jake May/The Flint Journal via AP Photo) 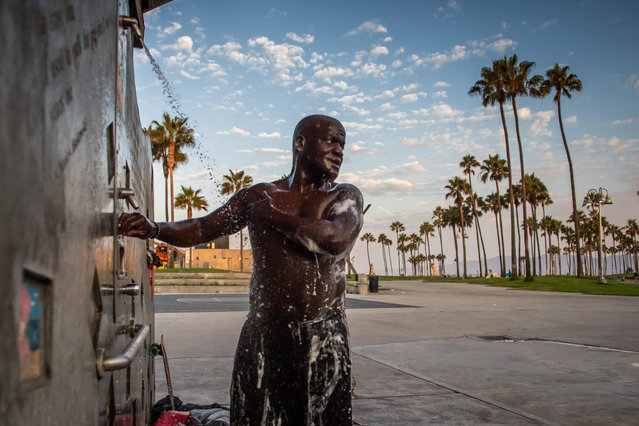 Jamal (only first name given) who has lived on the streets for 18 years, takes a shower in a public beach shower in Venice,California on August 12, 2021. (Photo by Apu Gomes/AFP Photo) 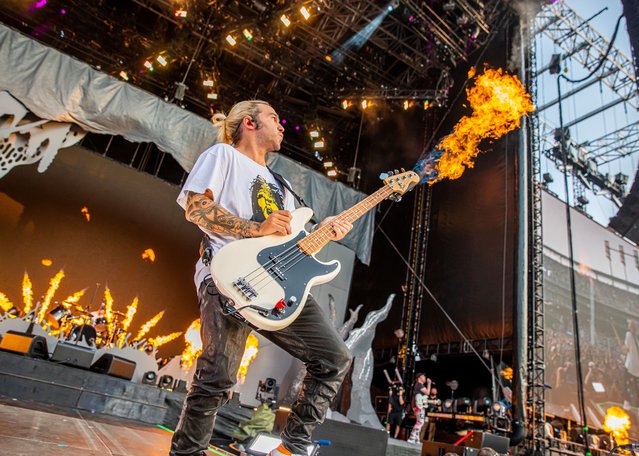 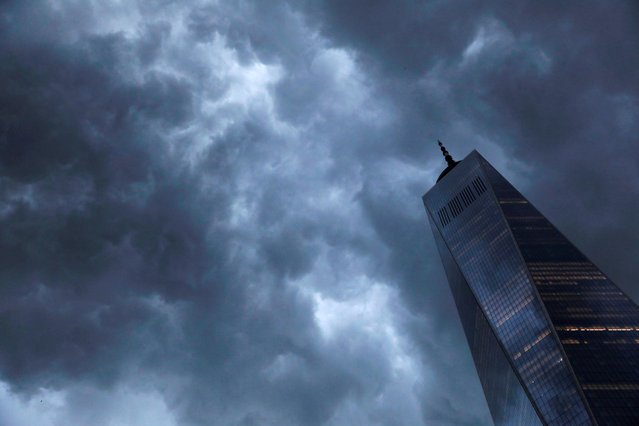 Storm clouds pass over One World Trade Center ahead of the 20th anniversary of the September 11 attacks in Manhattan, New York City, U.S., August 10, 2021. (Photo by Andrew Kelly/Reuters) 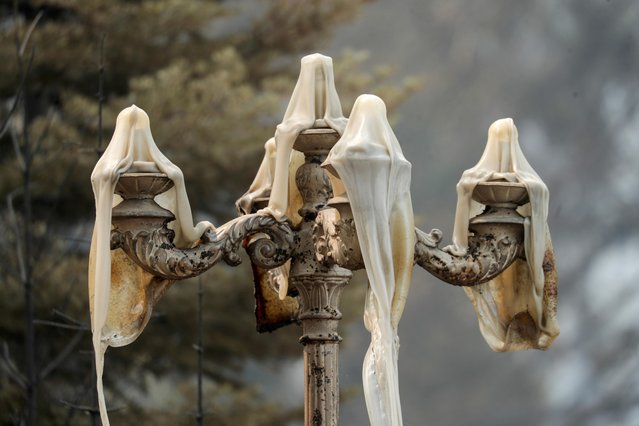 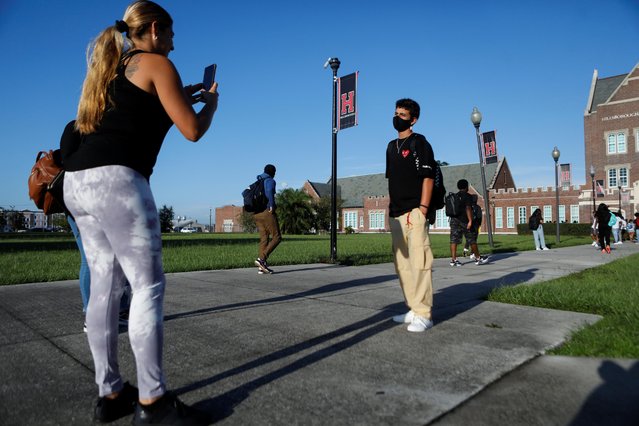 Lisa Placeres takes a photo of her son Daniel Fiallo on the first day of school, amid the coronavirus (COVID-19) pandemic, at Hillsborough High School in Tampa, Florida, U.S., August 10, 2021. (Photo by Octavio Jones/Reuters) 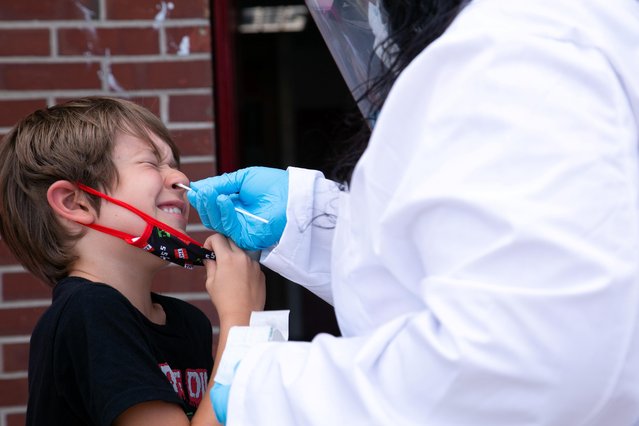 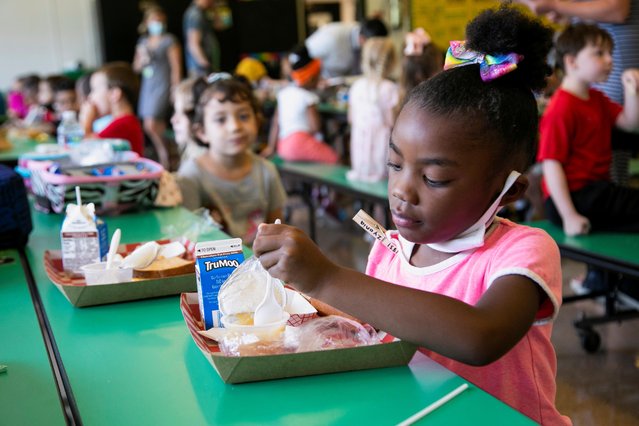 A student takes away her mask as she eats lunch at Wilder Elementary School in Louisville, KY, Kentucky, U.S., August 11, 2021. (Photo by Amira Karaoud/Reuters) 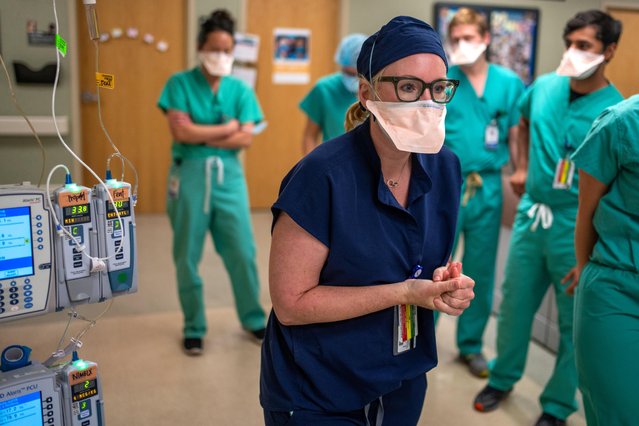 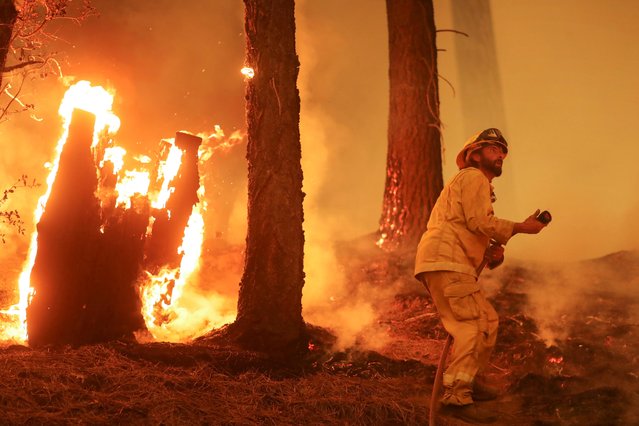 A firefighter continues to hold the line of the Dixie Fire near Taylorsville, California, U.S., August 10, 2021. (Photo by David Swanson/Reuters) 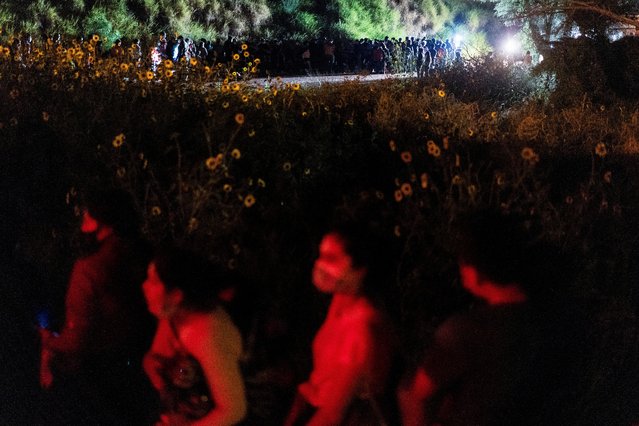 Asylum-seeking migrant families form a long queue as they wait to be processed by the U.S. Border Patrol after crossing the Rio Grande into the United States from Mexico in Roma, Texas, August 12, 2021. (Photo by Go Nakamura/Reuters) 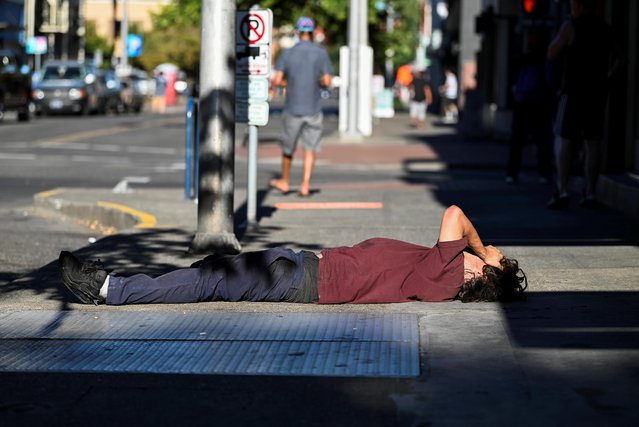 A man lies on a sidewalk during a heatwave in Portland, Oregon, U.S., August 11, 2021. (Photo by Mathieu Lewis-Rolland/Reuters) 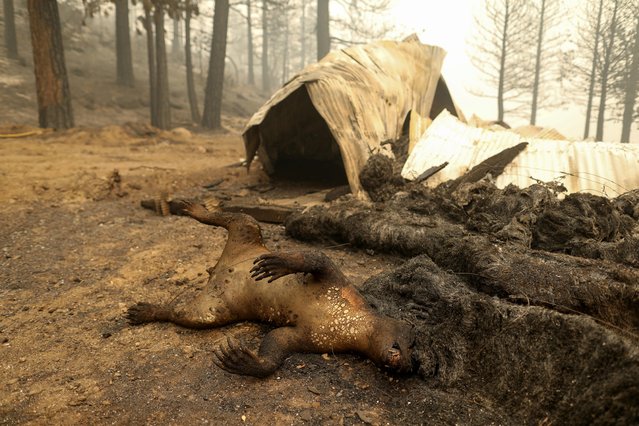 A dead black bear lays near a razed barn and hay from the Dixie Fire near Taylorsville, California, U.S., August 12, 2021. (Photo by David Swanson/Reuters) 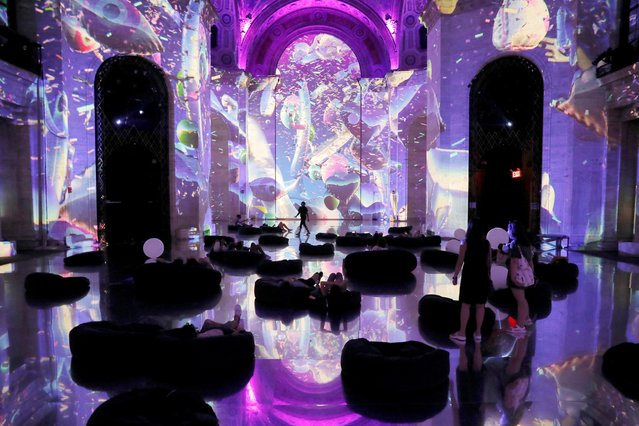 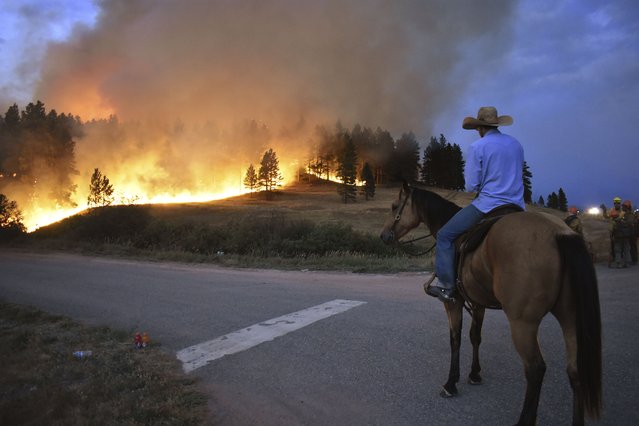 Rowdy Alexander watches from atop his horse as a hillside burns on the Northern Cheyenne Indian Reservation, Wednesday, August 11, 2021, near Lame Deer, Mont. The Richard Spring fire was threatening hundreds of homes as it burned across the reservation. (Photo by Matthew Brown/AP Photo) 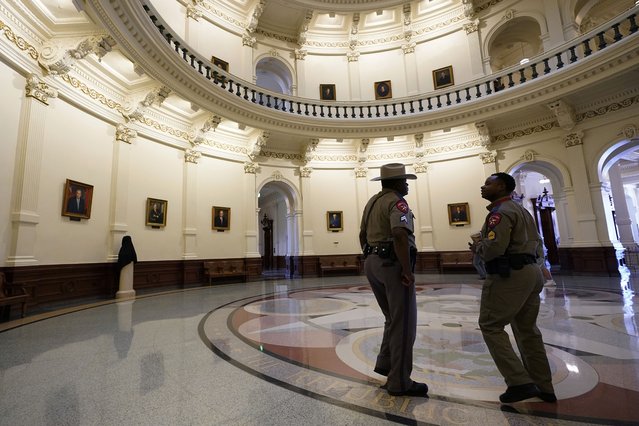 Texas Department of Safety officers stand watch over the Texas Capitol, Wednesday, August 11, 2021, in Austin, Texas. Officers of the Texas House of Representatives delivered civil arrest warrants for more than 50 absent Democrats on Wednesday as frustrated Republicans ratcheted up efforts to end a standoff over a sweeping elections bill that stretched into its 31st day. (Photo by Eric Gay/AP Photo) 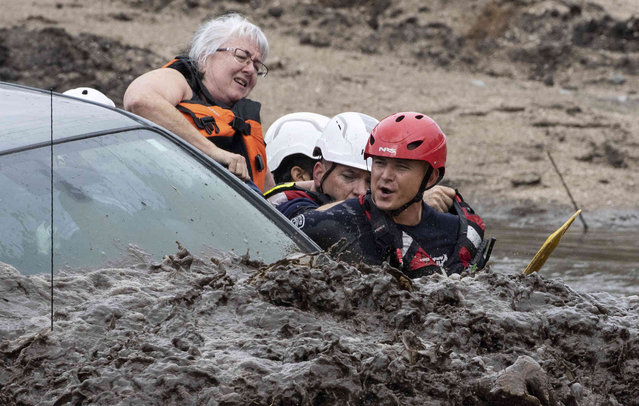 A woman climbs out of a Nissan pickup truck as Golder Ranch firefighters position themselves for a water rescue in the Cañada del Oro Wash north of Tucson, Ariz., on Tuesday, August 10, 2021. Firefighters rescued three people from one of two vehicles in the wash, swollen with runoff after an early-morning downpour dumped nearly two-inches upstream. (Photo by Rick Wiley/Arizona Daily Star via AP Photo) 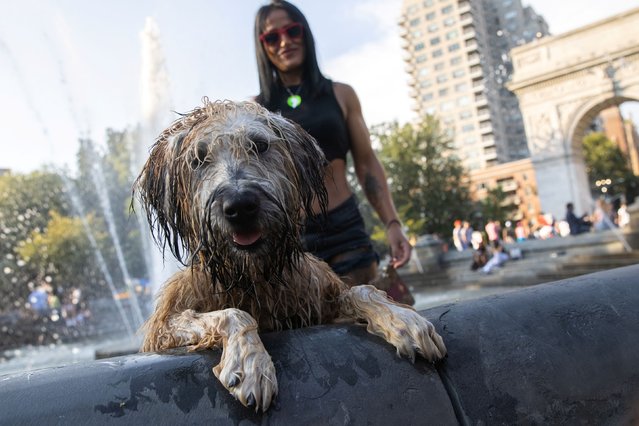