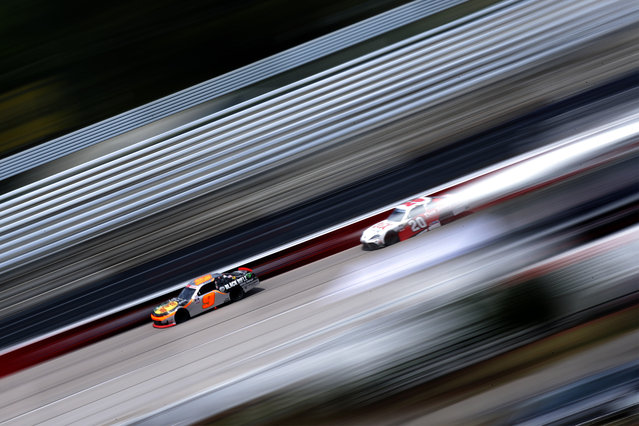 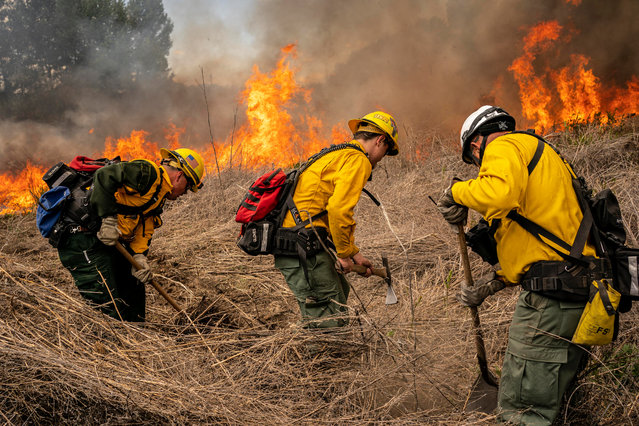 Volunteer firefighters practice with a live burn during a wildfire training course on May 8, 2021 in Brewster, Washington. New recruits and veteran firefighters with the Douglas Okanogan Fire District 15 participated in an annual course for the Incident Qualification Card, also known as the Red Card. (Photo by David Ryder/Getty Images) 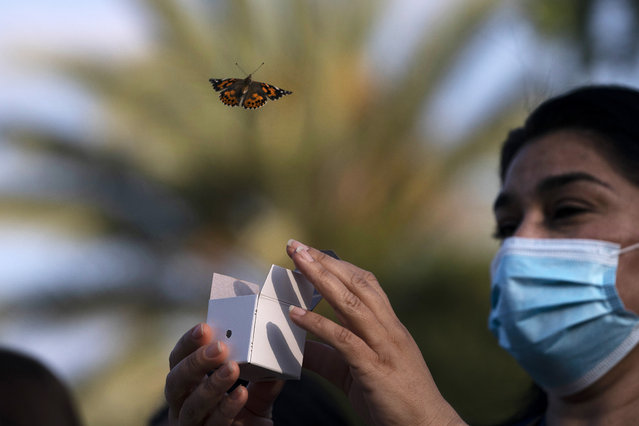 A butterfly is released during an event held to honor health care workers and those who lost loved ones to COVID-19, at Providence St. Jude Medical Center in Fullerton, Calif., Monday, May 10, 2021. (Photo by Jae C. Hong/AP Photo) 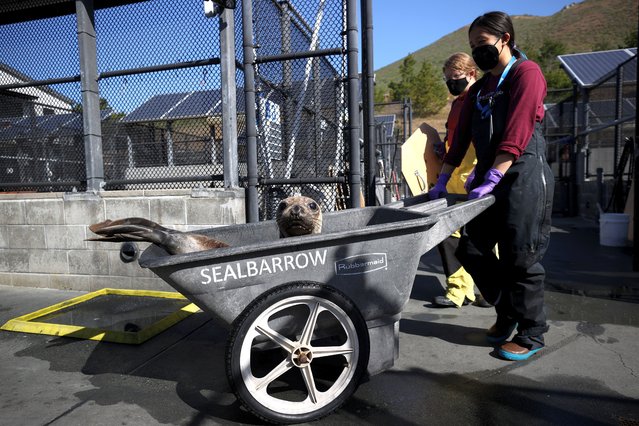 Volunteers push an Elephant Seal pup in a cart at The Marine Mammal Center on May 08, 2021 in Sausalito, California. Sea lions in California are facing a surge in cancer cases that are potentially linked to thousands of barrels of DDT that were dumped in the Pacific Ocean off the Southern California coast decades ago. A research vessel from Scripps Institution of Oceanography at University of California San Diego recently discovered and photographed over 27,000 barrels possibly containing the toxic substance DDT (dichloro-diphenyl-trichloroethane) on the seafloor between Santa Catalina Island and the Los Angeles coast. The Marine Mammal Center has found that approximately one in five California adult sea lions have died from cancer. (Photo by Justin Sullivan/Getty Images) 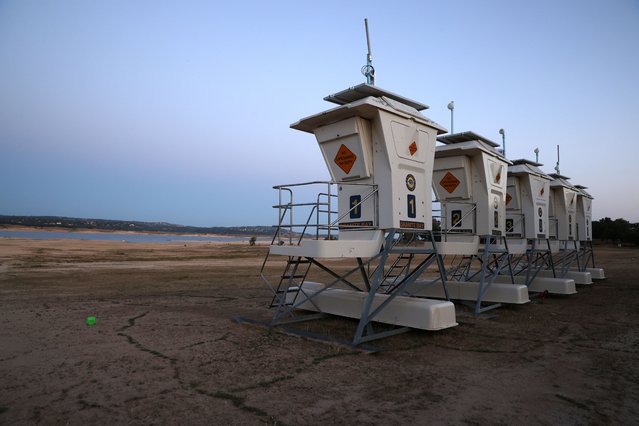 Empty lifeguard stands sit on the dry lakebed of Folsom Lake on May 10, 2021 in Granite Bay, California. California Gov. Gavin Newsom declared a drought emergency in 41 of California's 58 counties, about 30 percent of the state's population. Folsom Lake is currently at 38 percent of normal capacity. (Photo by Justin Sullivan/Getty Images) 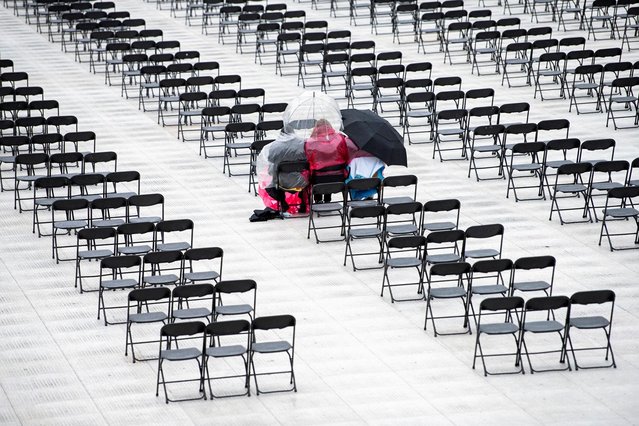 A family sits together during a graduation ceremony inside Ohio Stadium at Ohio State University (OSU) in Columbus, Ohio, U.S., May 9, 2021. (Photo by Gaelen Morse/Reuters) 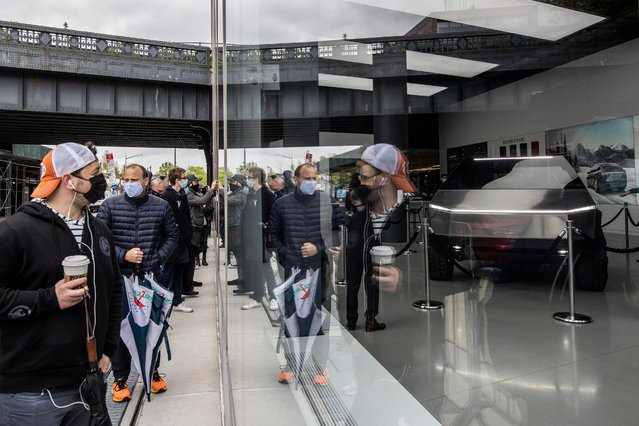 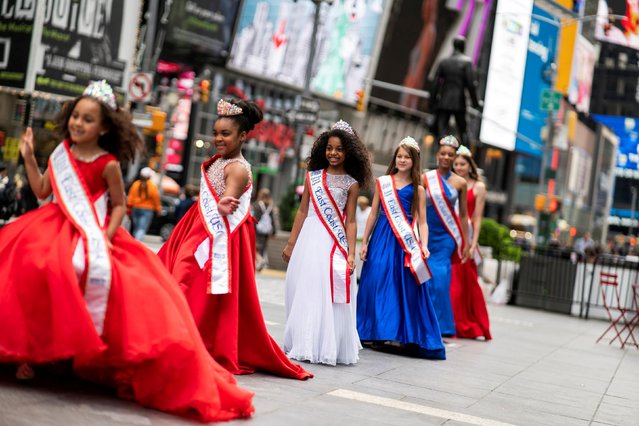 Girls pose for pictures during a beauty contest, amid the coronavirus disease (COVID-19) pandemic, at Times Square in Manhattan, New York City, U.S., May 7, 2021. (Photo by Eduardo Munoz/Reuters) 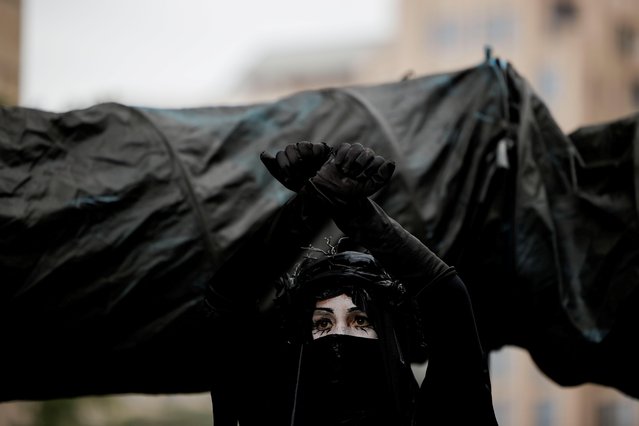 Climate activist protest against the funding of Enbridges' proposed expansion of its Line 3 tar sands pipeline during a rally outside a Wells Fargo branch in Washington, U.S., May 7, 2021. (Photo by Carlos Barria/Reuters) 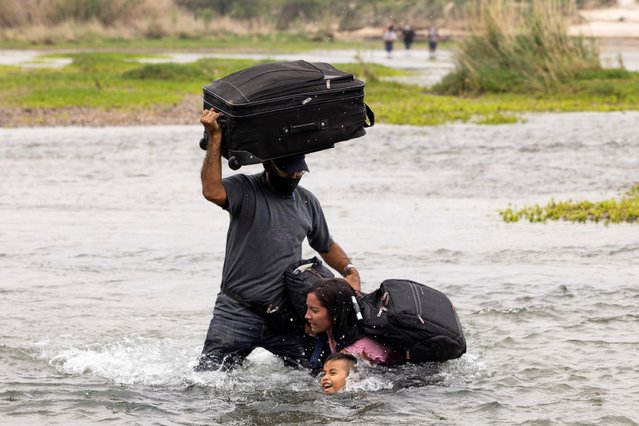 Asylum-seeking migrants from Venezuela cross the Rio Grande into the United States from Mexico, in Del Rio, Texas, May 10, 2021. (Photo by James Breeden/Reuters) 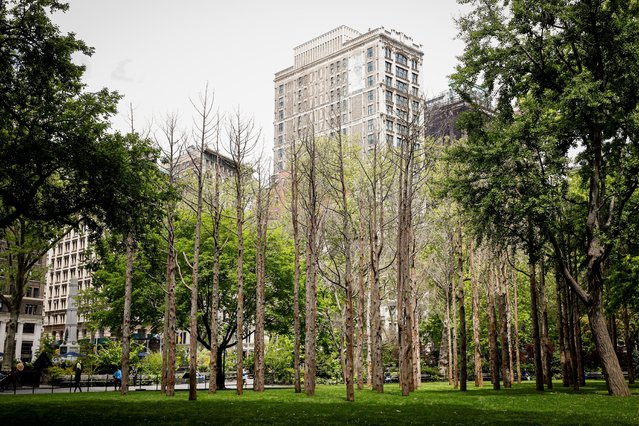 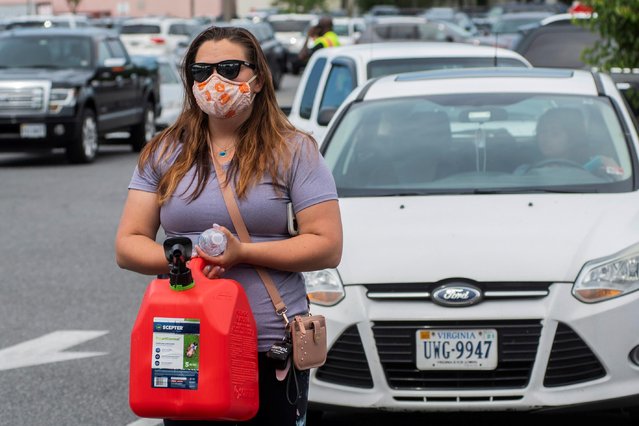 Elizabeth Dragomir had to stand in a line of vehicles waiting for gas at Costco after a cyberattack crippled the biggest fuel pipeline in the country, run by Colonial Pipeline. Dragomir's car ran out of gas in the parking lot, in Norfolk, Virginia, U.S., May 11, 2021. (Photo by Jay Paul/Reuters) 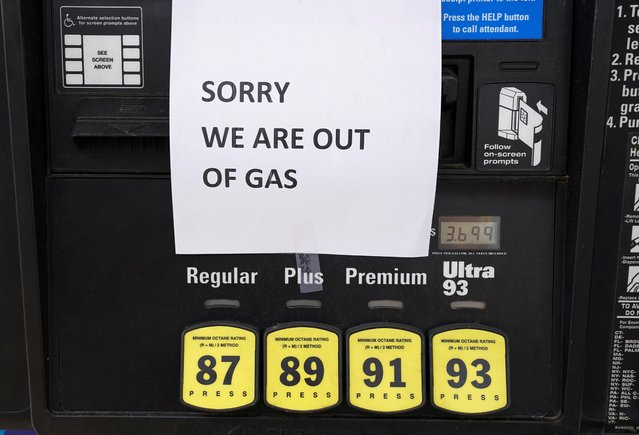 A sign tells drivers that gas pumps are empty as stations from Florida to Virginia began running dry and prices at the pump rose as the shutdown of the Colonial Pipeline by hackers sparked panic buying by motorists, in Falls Church, Virginia, May 12, 2021. (Photo by Kevin Lamarque/Reuters) 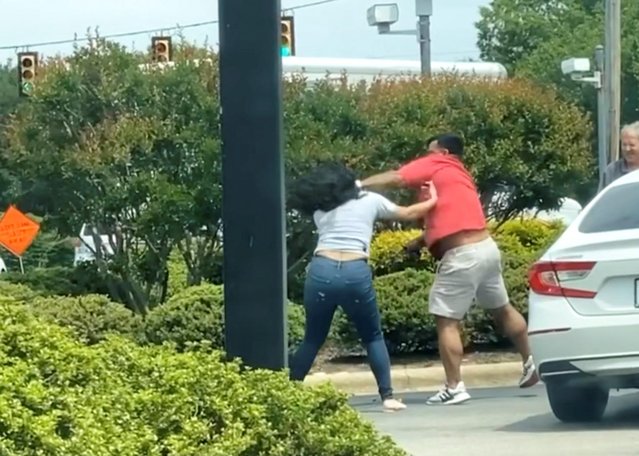 Two drivers get into a fight while waiting in line at a gas station amid fuel shortages in Knightdale, North Carolina, May 10, 2021. (Photo by @shaaddeez/Instagram via Reuters) 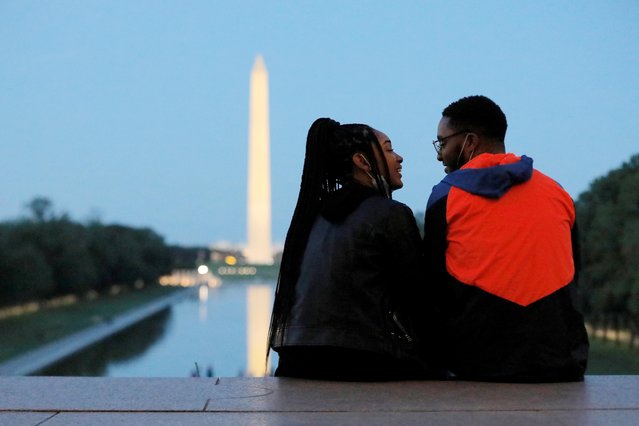 People sit on the steps of the Lincoln Memorial looking toward the Washington Monument in Washington, D.C., U.S., May 10, 2021. (Photo by Andrew Kelly/Reuters) 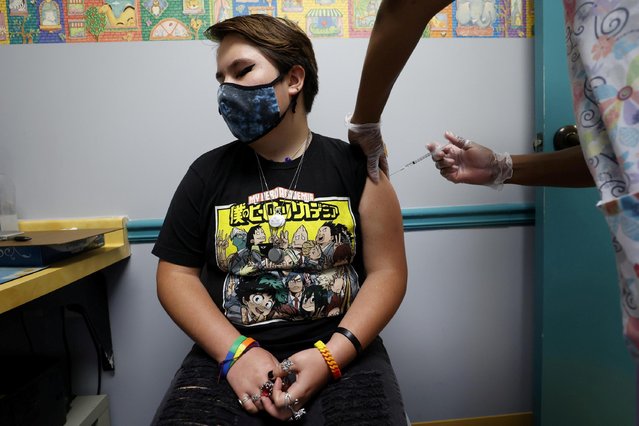 Grace Peterson, 14, is inoculated with Pfizer's coronavirus vaccine after Georgia authorized the vaccine for ages over 12 years, at Dekalb Pediatric Center in Decatur, Georgia, May 11, 2021. (Photo by Chris Aluka Berry/Reuters) 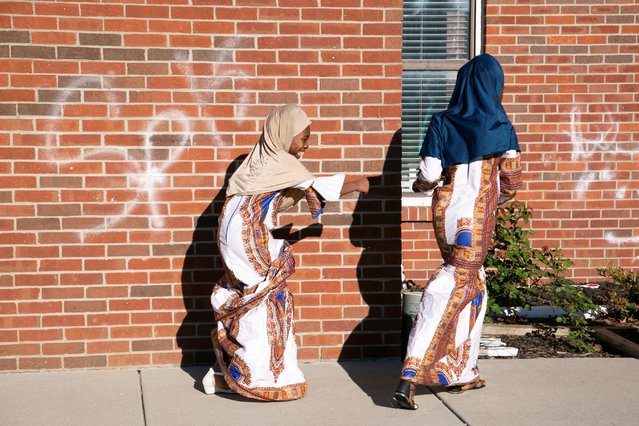 Mahawa and Xiomara Kouyate, originally from Guinea, play outside the Guiding Light Islamic Center during gathering of Eid in Louisville, Kentucky, U.S. May 13, 2021. (Photo by Amira Karaoud/Reuters) 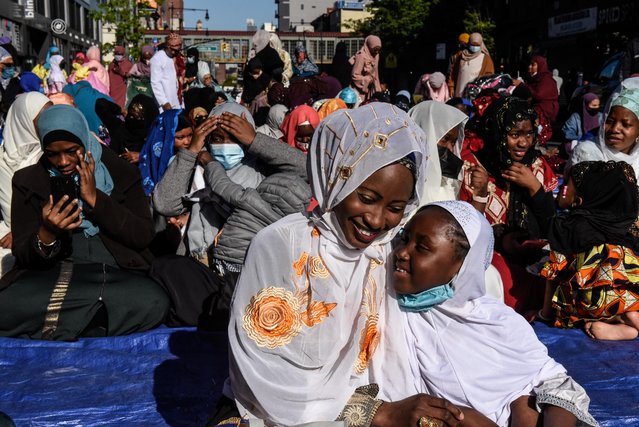 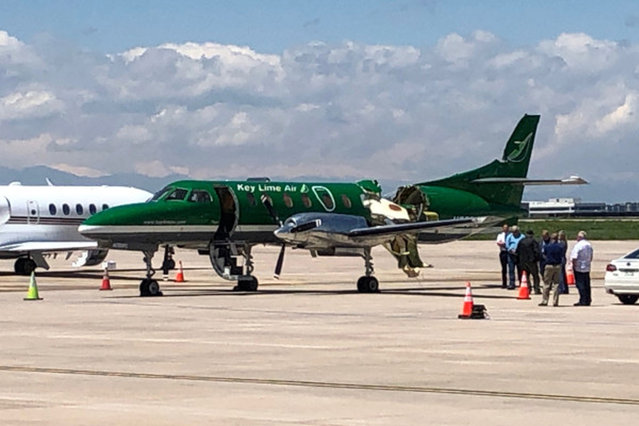 This image from CBS Denver shows a Key Lime Air Metroliner that landed safely at Centennial Airport after a mid-air collision near Denver on Wednesday, May 12, 2021. Federal officials say two airplanes collided but that there are no injuries. The collision between a twin-engine Fairchild Metroliner and a single-engine Cirrus SR22 happened as both planes were landing, according to the National Transportation Safety Board. Key Lime Air, which owns the Metroliner, says its aircraft sustained substantial damage to the tail section but that the pilot was able to land safely. (Photo by CBS Denver via AP Photo)
Edit Del
18 May 2021 09:08:00, post received 0 comments
Publication archive:
←   →
Popular tags:
All tags
Last searches: