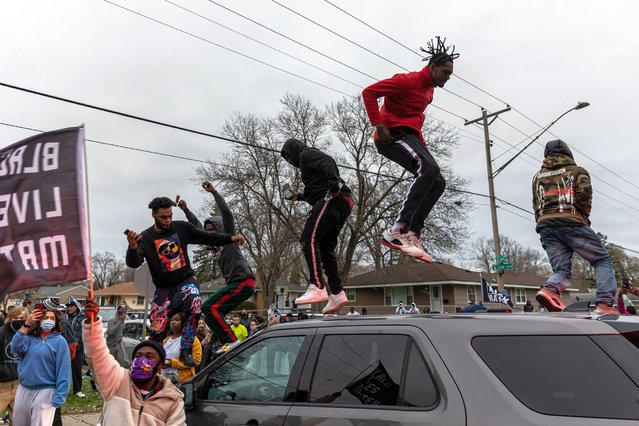 Protesters stand on top of a police car as they clash after an officer shot and killed a black man in Brooklyn Center, Minneapolis, Minnesota on April 11,2021. Protests broke out April 11, 2021 night after US police fatally shot a young Black man in a suburb of Minneapolis – where a former police officer is currently on trial for the murder of George Floyd. Hundreds of people gathered outside the police station in Brooklyn Center, northwest of Minneapolis. Police fired teargas and flash bangs at the demonstrators, according to an AFP videojournalist at the scene. (Photo by Kerem Yucel/AFP Photo) 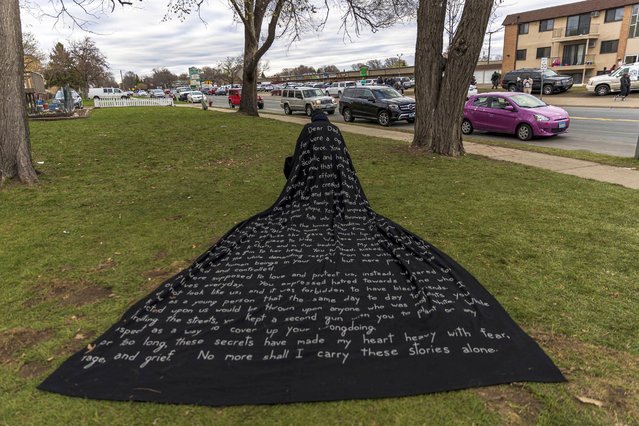 San Francisco-based artist Liney D draws attention to social injustice by wearing a cape with her story written on it, in front of the Brooklyn Central Police Station in Brooklyn Center, Minnesota on April 15, 2021. Kim Potter, the policewoman who shot dead Daunte Wright in a Minneapolis suburb after appearing to mistake her gun for her Taser, was arrested on Wednesday on manslaughter charges. Minneapolis has been roiled by nightly violent protests after Potter's shooting of Wright in his car on Sunday. (Photo by Kerem Yucel/AFP Photo) 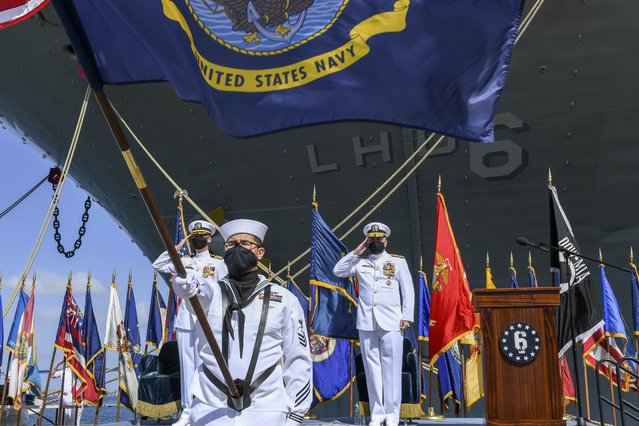 This photo provided by the U.S. Navy shows Rear Adm. Philip Sobeck, Commander, Expeditionary Strike Group Three, and Capt. G. S. Thoroman, commanding officer, amphibious assault ship USS Bonhomme Richard, salute the ensign for colors during a decommissioning ceremony at Naval Base San Diego April 14, 2021. The U.S. Navy has decommissioned the USS Bonhomme Richard docked off San Diego nine months after flames engulfed it in one of the worst U.S. warship fires outside of combat in recent memory. The ceremony Wednesday at Naval Base San Diego was not public with the Navy citing concerns over the spread of the coronavirus. (Photo by Mass Communication Specialist 2nd Class Alex Millar/U.S. Navy via AP Photo) 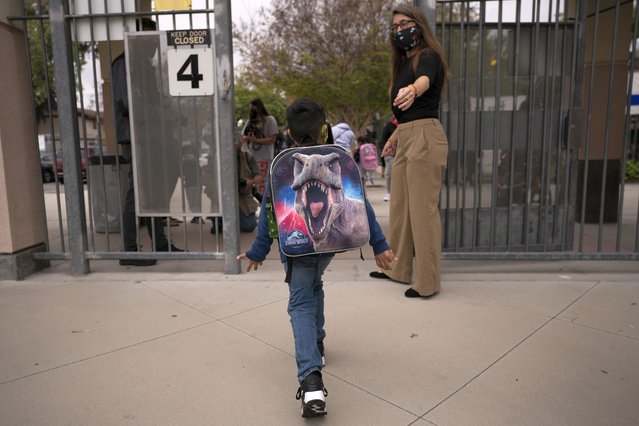 Kindergartener Angel Hernandez leaves after the first day of in-person learning at Maurice Sendak Elementary School in Los Angeles, Tuesday, April 13, 2021. A recent spike in coronavirus cases in some states has led one of the nation's top health experts to suggest that governors could “close things down” like they did during previous surges. But that doesn't appear likely to happen – not even in states led by Democratic governors who favored greater restrictions in the past. (Photo by Jae C. Hong/AP Photo) 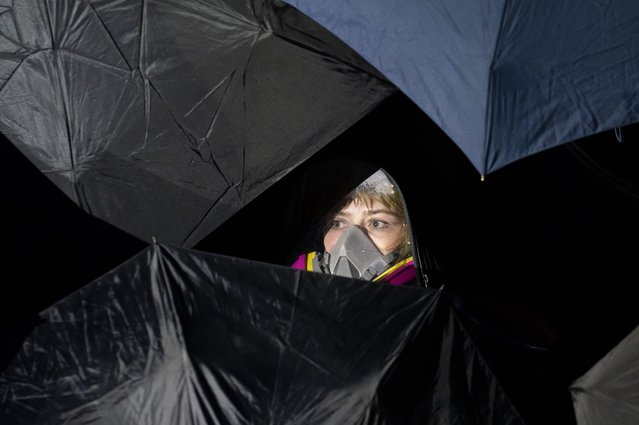 A demonstrator is behind umbrellas during a protest over Sunday's fatal shooting of Daunte Wright during a traffic stop, outside the Brooklyn Center Police Department on Wednesday, April 14, 2021, in Brooklyn Center, Minn. (Photo by John Minchillo/AP Photo) 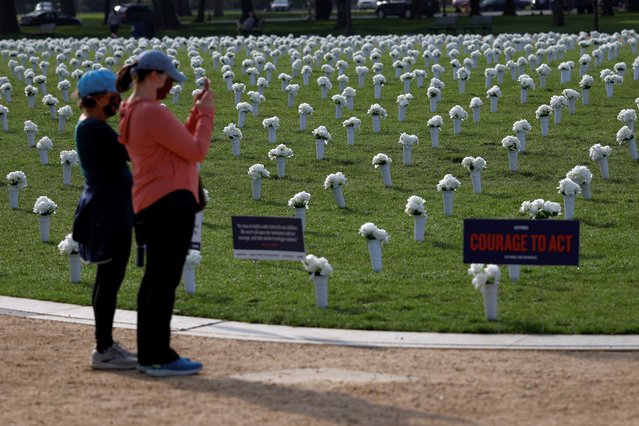 Visitors take pictures of the new Gun Violence Memorial, an installation featuring 38,000 silk white roses in 4,000 vases to commemorate the roughly 40,000 Americans who die annually in gun violence, on the National Mall in Washington, U.S., April 14, 2021. (Photo by Carlos Barria/Reuters) 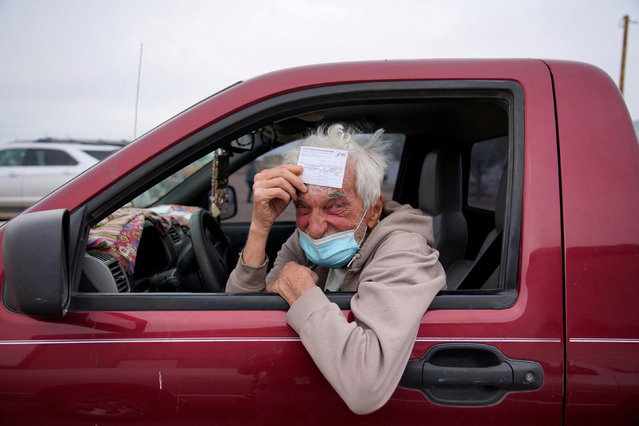 Taras Mychalewych, 75, poses for a portrait with his vaccination card after receiving his coronavirus disease (COVID-19) vaccine at a rural vaccination site in Columbus, New Mexico, U.S., April 16, 2021. (Photo by Paul Ratje/Reuters) 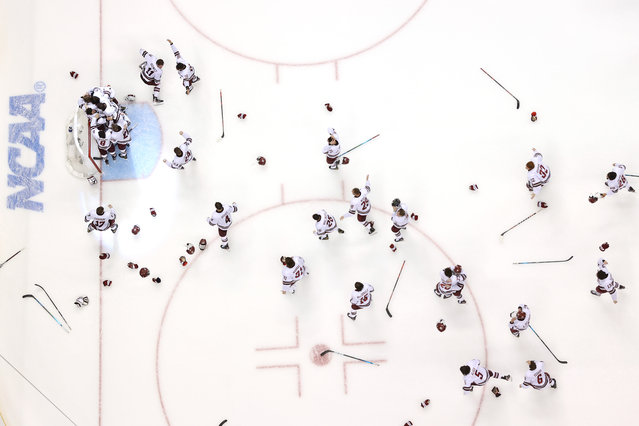 The Massachusetts Minutemen celebrate after winning the Division I Men's Ice Hockey Championship 5-0 against the St. Cloud St. Huskies at PPG Paints Arena on April 10, 2021 in Pittsburgh, Pennsylvania. (Photo by Gregory Shamus/Getty Images) 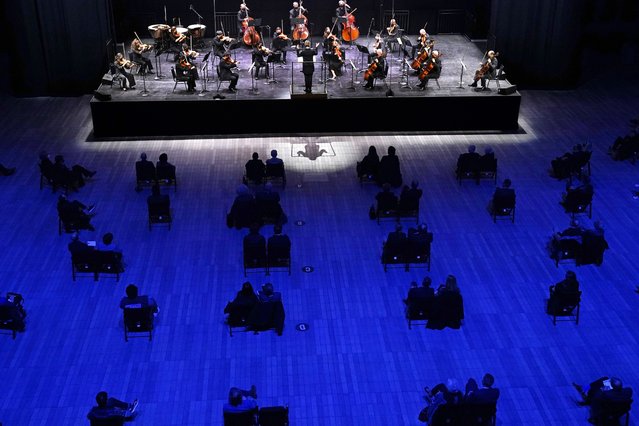 Esa-Pekka Salonen, music director of the San Francisco Symphony and principal conductor of London's Philharmonia Orchestra, leads the New York Philharmonic, whose members performed together before a crowd for the first time since March 10, 2020, at The Shed in Hudson Yards, Wednesday, April 14, 2021, in New York. (Photo by Kathy Willens/AP Photo) 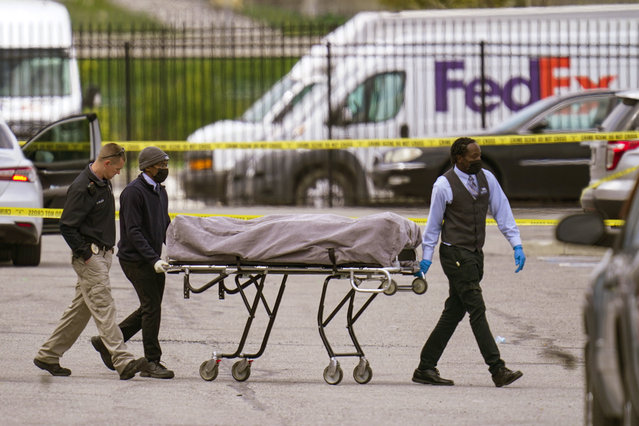 A body is taken from the scene where multiple people were shot at a FedEx Ground facility in Indianapolis, Friday, April 16, 2021. A gunman killed several people and wounded others before taking his own life in a late-night attack at a FedEx facility near the Indianapolis airport, police said. (Photo by Michael Conroy/AP Photo) 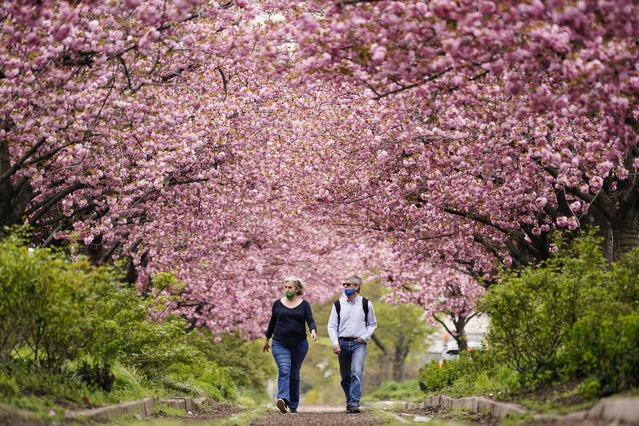 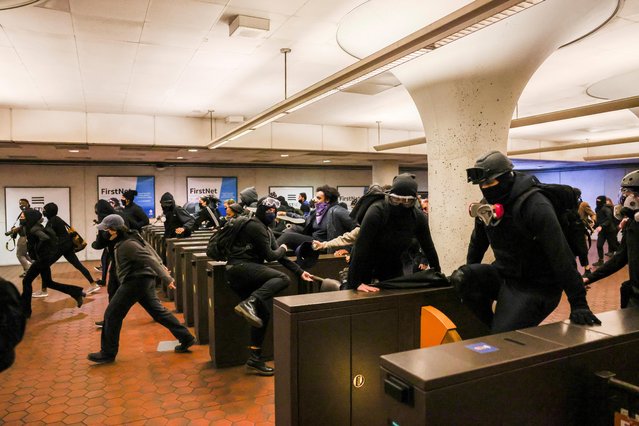 Protestors jump over the turnstiles at the Gallery Place metro station during a protest following the fatal police shooting of 20-year-old Black man Daunte Wright in Minnesota, in Washington, U.S., April 12, 2021. (Photo by Evelyn Hockstein/Reuters) 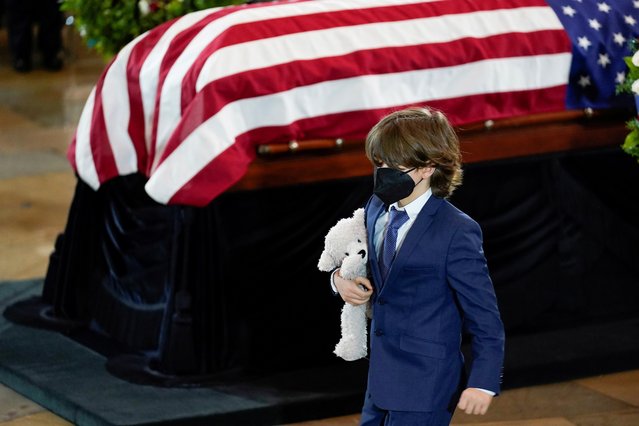 Logan Evans, son of slain U.S. Capitol Police officer William “Billy” Evans, walks past the casket during a ceremony at the Capitol in Washington, April 13, 2021. (Photo by J. Scott Applewhite/Pool via Reuters) 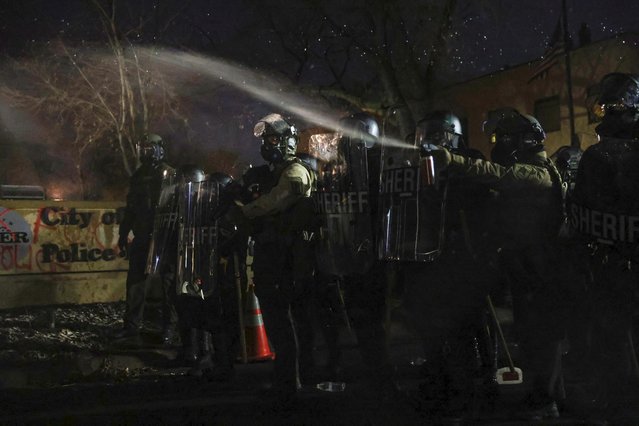 A police officer releases a chemical irritant at a protester on the other side of the fence of the Brooklyn Center Police Department, in Brooklyn Center, Minnesota, April 13, 2021. (Photo by Leah Millis/Reuters) 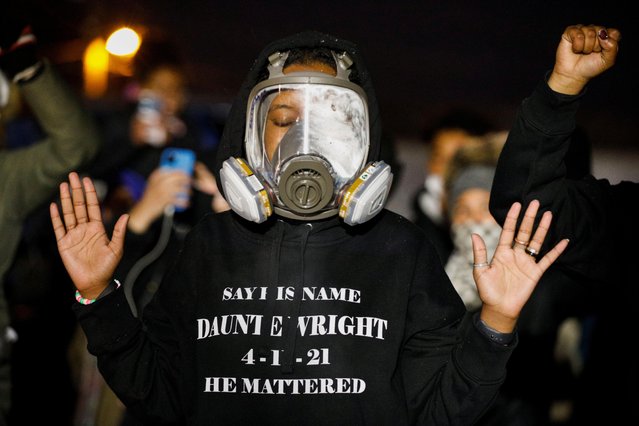 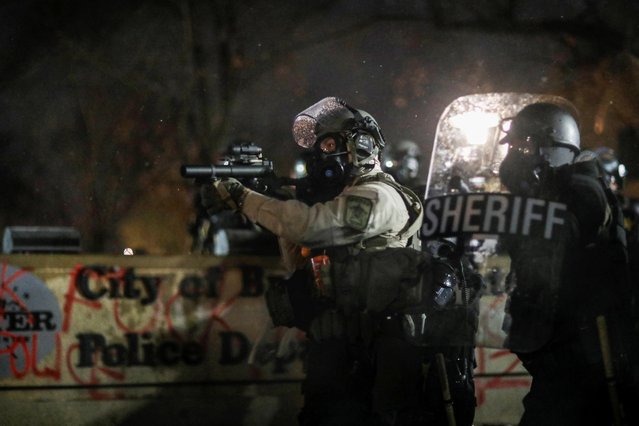 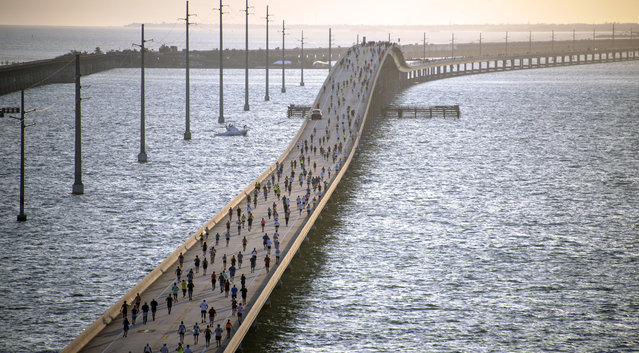 This handout photo released by the Florida Keys News Bureau shows an aerial photo of 1,000 registered competitors heading to the highest point of the Seven Mile Bridge in the Florida Keys during the Seven Mile Bridge Run on April 17, 2021, near Marathon, Florida. The annual contest was canceled in 2020 because of Covid-19 and this year’s field was only comprised of runners who had registered in 2020. The race began in 1982 to mark the completion of a new Seven Mile Bridge as well as construction of 36 other spans to replace aging bridges that once carried the Florida Keys Oversea Railroad. (Photo by Andy Newman/Florida Keys News Bureau/AFP Photo)
Edit Del
19 Apr 2021 09:51:00, post received 0 comments
Publication archive:
←   →
Popular tags:
All tags
Last searches: