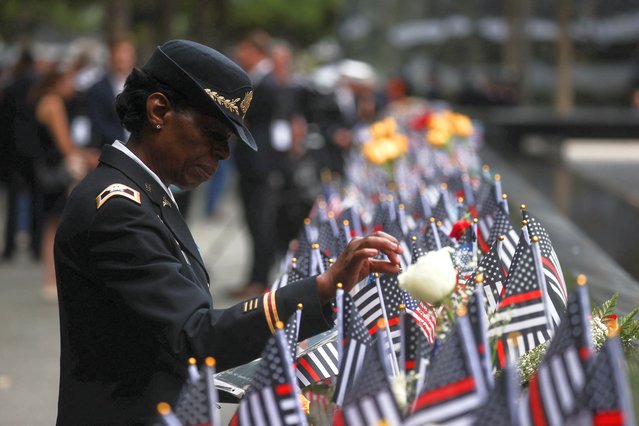 Colonel Davis attends a ceremony marking the 21st anniversary of the September 11, 2001 attacks on the World Trade Center at the 9/11 Memorial and Museum in the Manhattan borough of New York City, U.S., September 11, 2022. (Photo by Amr Alfiky/Reuters) 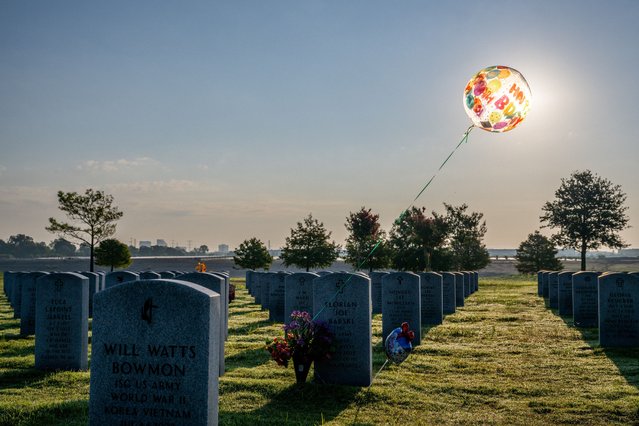 A birthday balloon is seen tied to a tombstone at the Houston National Cemetery on September 10, 2022 in Houston, Texas. People around Houston have begun visiting and preparing ahead of the 21st anniversary of the 9/11 terrorist attacks in New York City. Nearly 3,000 people were killed when terrorists hijacked four passenger planes and crashed them into the twin towers at the World Trade Center on September 11, 2001. (Photo by Brandon Bell/Getty Images) 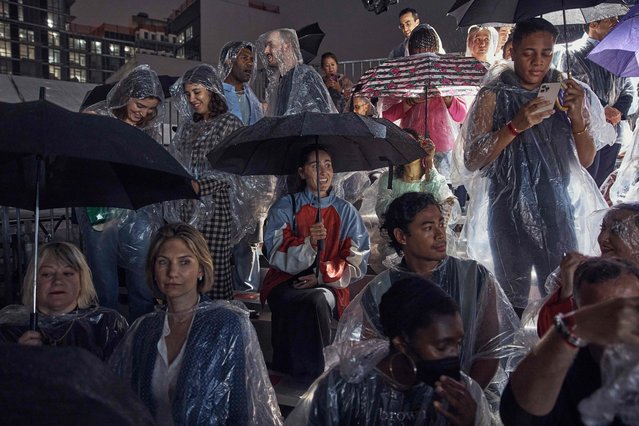 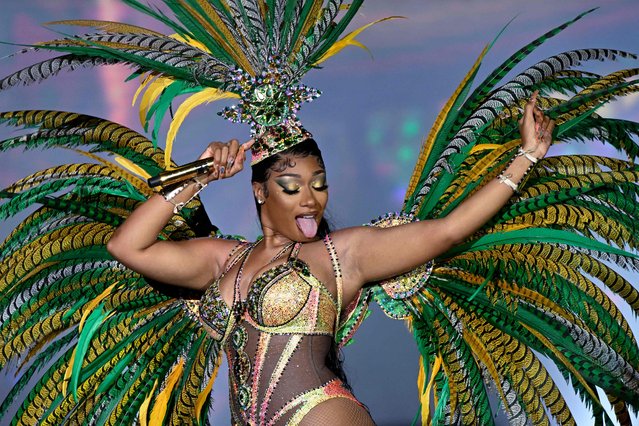 US rapper Megan Thee Stallion performs on the main stage of the Rock in Rio music festival at the Rio 2016 Olympic Park in Rio de Janeiro, Brazil, on September 11, 2022. (Photo by Mauro Pimentel/AFP Photo) 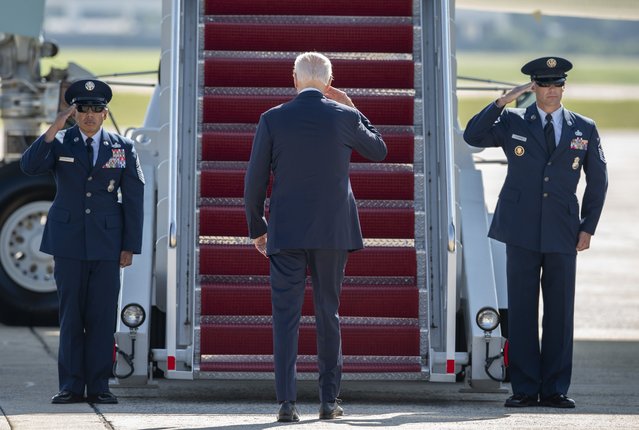 President Joe Biden returns a salute as he boards Air Force One at Andrews Air Force Base, Md., Friday, September 9, 2022, on his way to the groundbreaking of the new Intel semiconductor manufacturing facility in New Albany, Ohio. (Photo by Gemunu Amarasinghe/AP Photo) 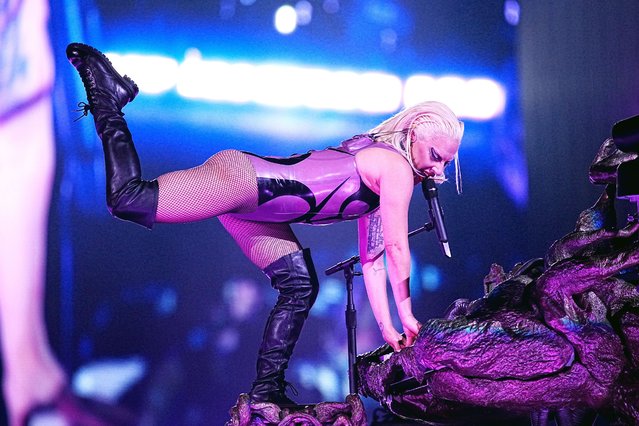 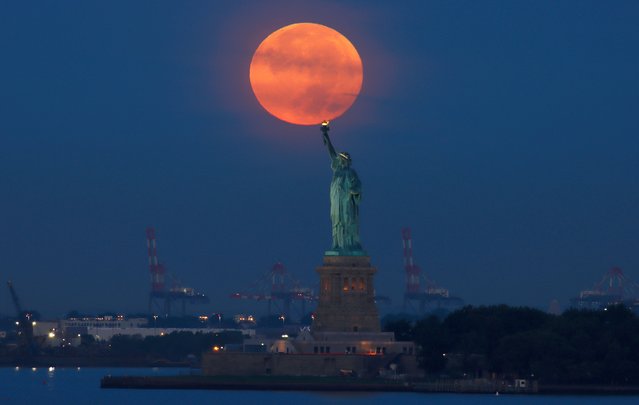 The full Harvest Moon sets behind the Statue of Liberty as the sun rises on September 10, 2022, in New York City. (Photo by Gary Hershorn/Getty Images) 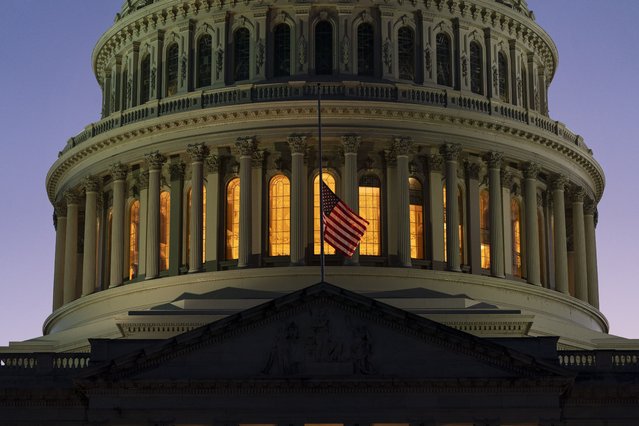 The American flag flies at half-staff over the U.S. Capitol, Thursday, September 8, 2022, on Capitol Hill in Washington, after Queen Elizabeth II, Britain's longest-reigning monarch and a rock of stability across much of a turbulent century, died Thursday after 70 years on the throne. She was 96. (Photo by Jacquelyn Martin/AP Photo) 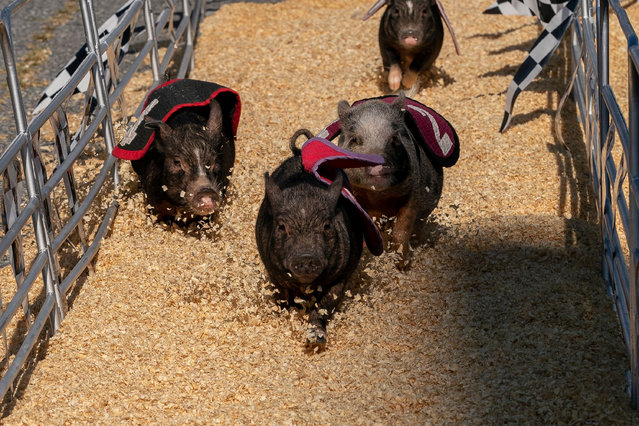 Pigs run during the swifty swine pig race at the Maryland State Fair in Lutherville-Timonium, Maryland, on September 9, 2022. (Photo by Stefani Reynolds/AFP Photo) 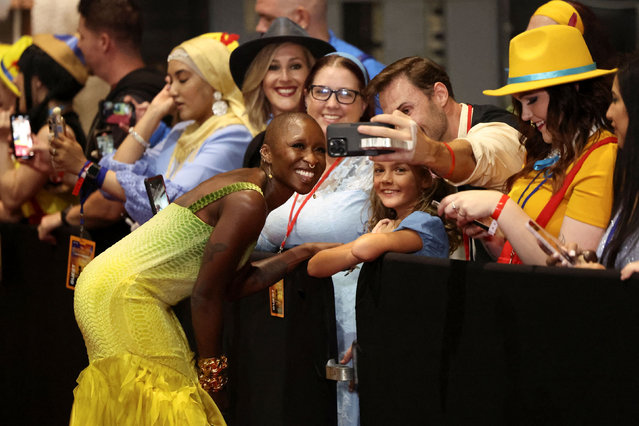 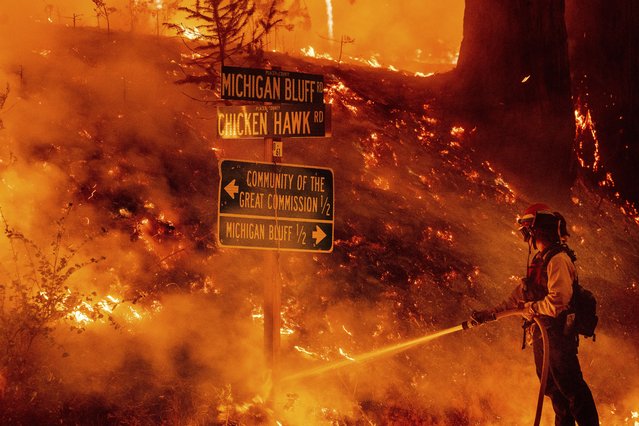 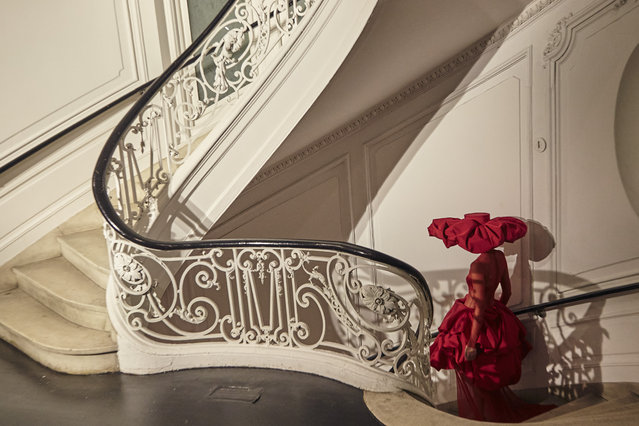 Fashion from the Christian Siriano collection is modeled during Fashion Week on Wednesday, September 7, 2022, in New York. (Photo by Andres Kudacki/AP Photo) 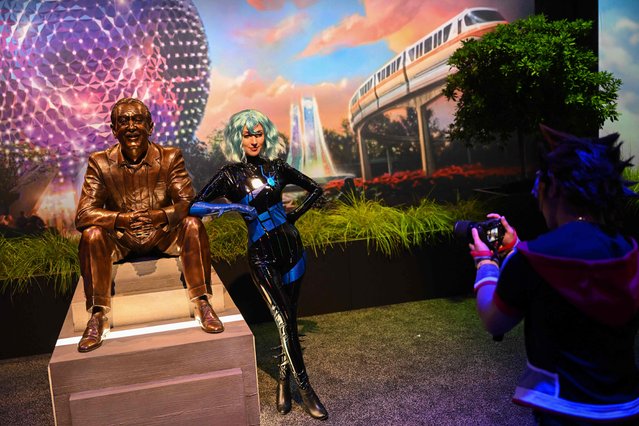 An attendee in costume poses for a picture with the Walt The Dreamer statue during the Walt Disney D23 Expo in Anaheim, California on September 9, 2022. (Photo by Patrick T. Fallon/AFP Photo) 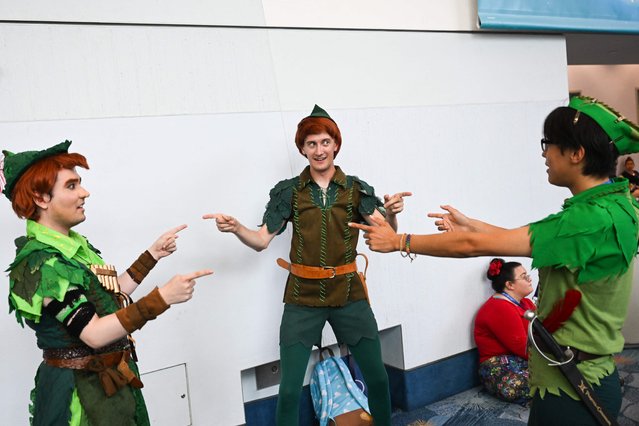 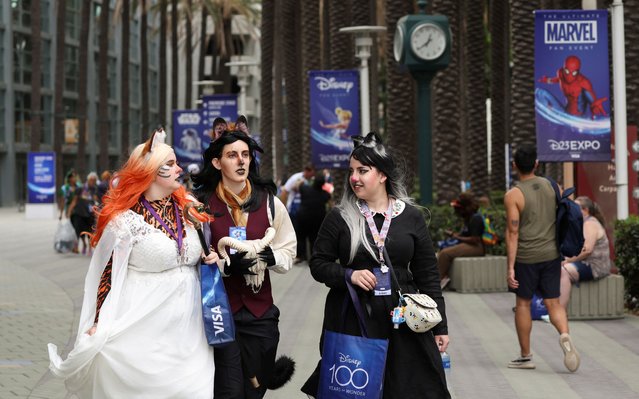 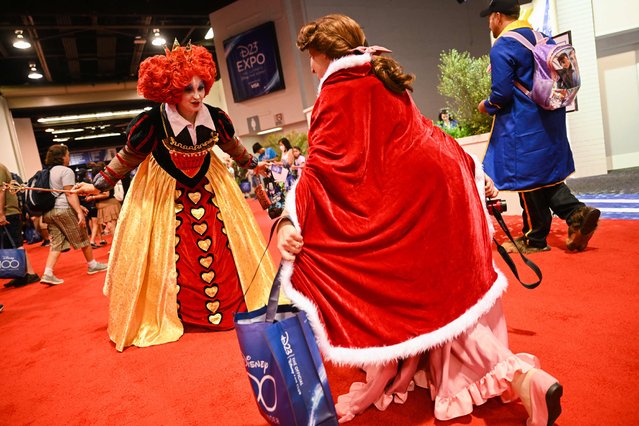 A fan cosplaying as the Queen of Hearts from Alice in Wonderland reacts to Belle in costume during the Walt Disney D23 Expo in Anaheim, California on September 9, 2022 (Photo by Patrick T. Fallon/AFP Photo) 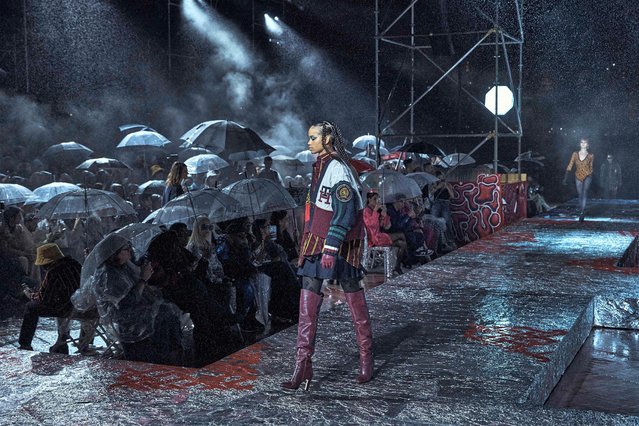 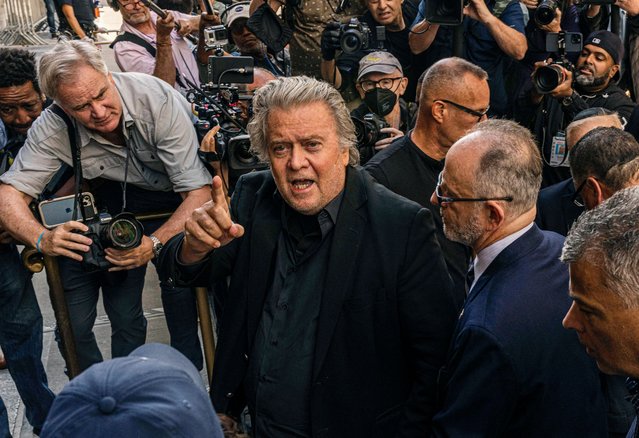 Donald Trump's former advisor Steve Bannon (C) arrives for court in New York on September 8, 2022, to be charged with fraud in a case of alleged misappropriation of funds for the construction of a wall between the US and Mexico. Bannon, 68, a popular ideologue who was closely involved in Trump's rise to the US presidency surrendered to the office of Manhattan's prosecutor and to face the charges, his lawyer Robert Costello told CNBC television. (Photo by Alex Kent/AFP Photo) 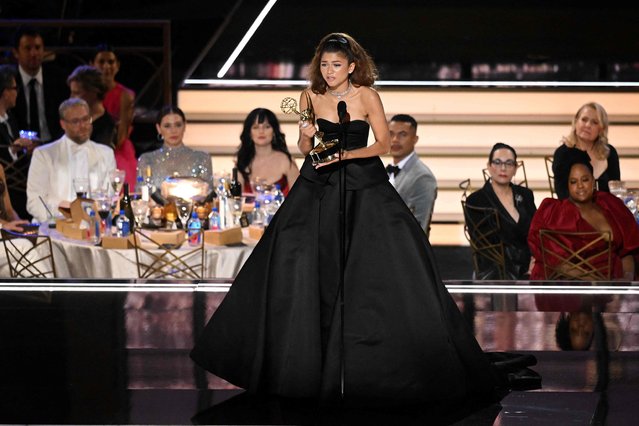 US actress Zendaya accepts the award for Outstanding Lead Actress In A Drama Series for “Euphoria” onstage during the 74th Emmy Awards at the Microsoft Theater in Los Angeles, California, on September 12, 2022. (Photo by Patrick T. Fallon/AFP Photo) 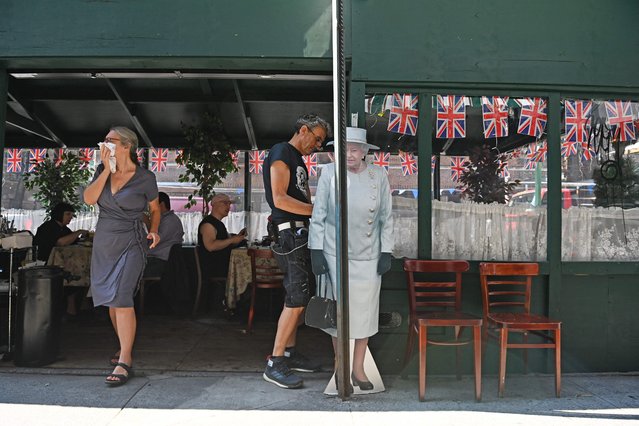 A woman walks past a life-sized cut-out of Britain's Queen Elizabeth II outside the British owned business of Tea & Sympathy in Manhattan's Greenwich Village in New York on September 9, 2022. Queen Elizabeth II, the longest-serving monarch in British history and an icon instantly recognisable to billions of people around the world, died at her Scottish Highland retreat on September 8, at the age of 96. (Photo by Andrea Renault/AFP Photo)
Edit Del
19 Sep 2022 04:28:00, post received 0 comments
Publication archive:
←   →
Popular tags:
All tags
Last searches: