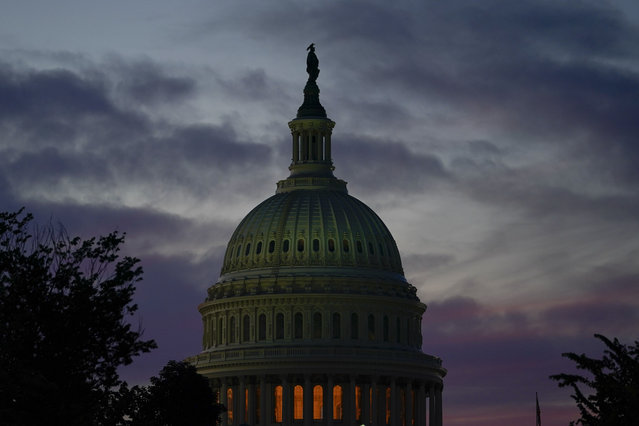 The sun sets behind the U.S. Capitol Thursday, June 9, 2022, in Washington, as the House select committee holds its first public hearing in its investigation of the Jan. 6 attack on the U.S. Capitol.. (Photo by Julio Cortez/AP Photo) 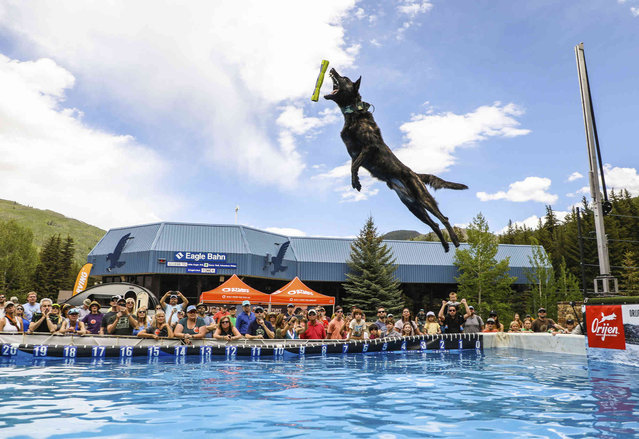 Bronn, a Dutch shepherd, launches 22 feet, 6 inches, during the Dock Dogs Outdoor Big Air for the GoPro Mountain Games, Thursday, June 9, 2022, at Lionshead Village in Vail, Colo. The big air is always a crowd favorite as dogs can fly nearly 30 feet in distance through the air. (Photo by Chris Dillmann/Vail Daily via AP Photo) 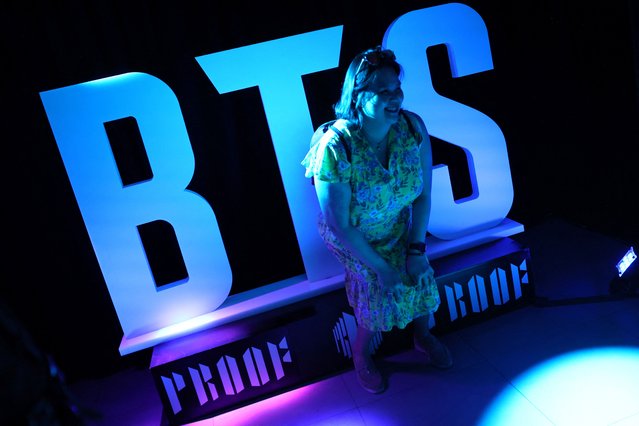 A fan of the South Korean boy band BTS poses for a picture inside a newly opened pop-up shop selling BTS merchandise after the release of their new album “Proof” in in Manhattan in New York City, New York, U.S., June 10, 2022. (Photo by Mike Segar/Reuters) 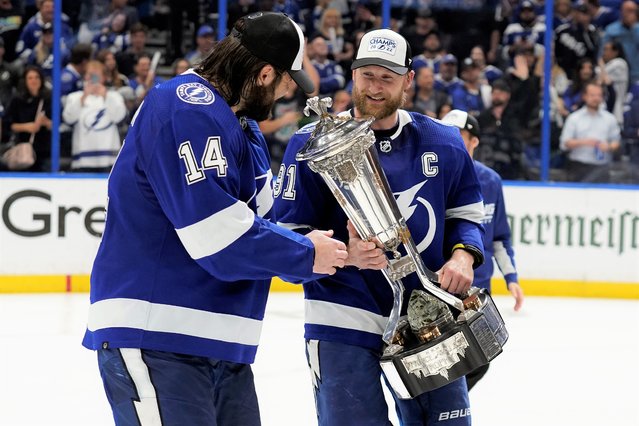 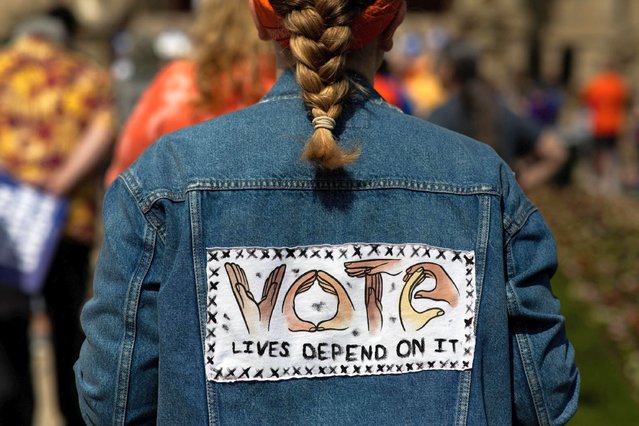 A young girl wears an embroidered jacket during a March for Our Lives rally for gun control in Lansing, Michigan, U.S., June 11, 2022. (Photo by Emily Elconin/Reuters) 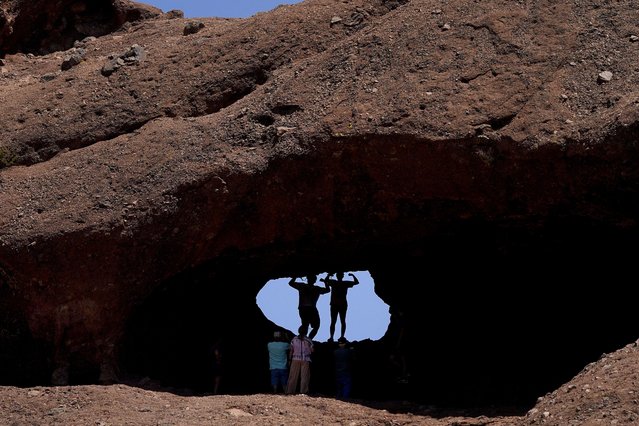 A pair of mid-day hikers pose for a picture in the hole in the rock at Papago Park, Friday, June 10, 2022, in Phoenix. Heat is part of the normal routine of summertime in the desert, but weather forecasters say that doesn't mean people should feel at ease. Excessive heat causes more deaths in the U.S. than other weather-related disasters, including hurricanes, floods and tornadoes combined. Officials are advising people to limit time outdoors, drink plenty of water and seek shade if they must be outside. (Photo by Matt York/AP Photo) 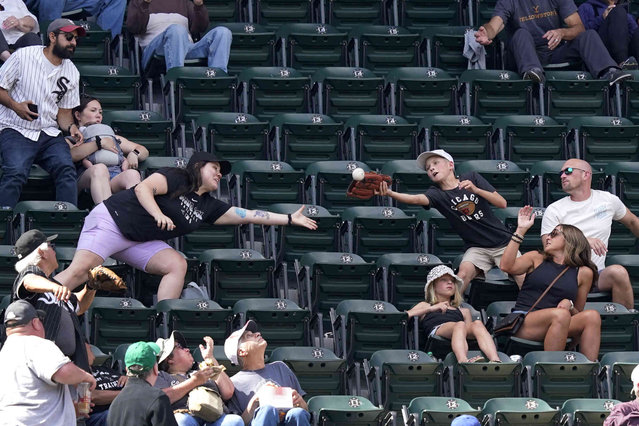 Baseball fans reach for a foul ball by Los Angeles Dodgers' Max Muncy in the upper deck of U.S. Cellular Field during the sixth inning of a baseball game between the Chicago White Sox and the Dodgers Thursday, June 9, 2022, in Chicago. (Photo by Charles Rex Arbogast/AP Photo) 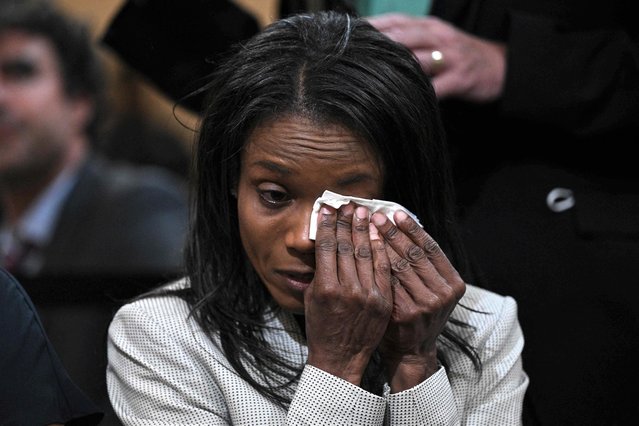 Serena Liebengood, widow of Capitol Police officer Howie Liebengood, cries as she attends a House Select Committee hearing to Investigate the January 6th Attack on the US Capitol, in the Cannon House Office Building on Capitol Hill in Washington, DC on June 9, 2022. (Photo by Brendan Smialowski/AFP Photo) People attend the L.E.A.F Festival of Flowers, where more than a million flowers are on display, in Manhattan's Meatpacking District in New York City, U.S., June 10, 2022. (Photo by Roselle Chen/Reuters) 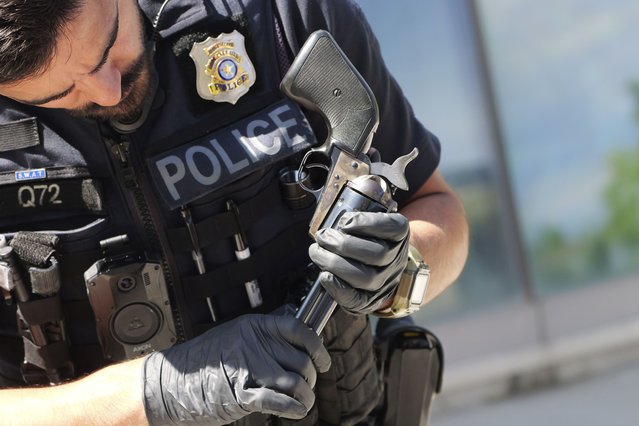 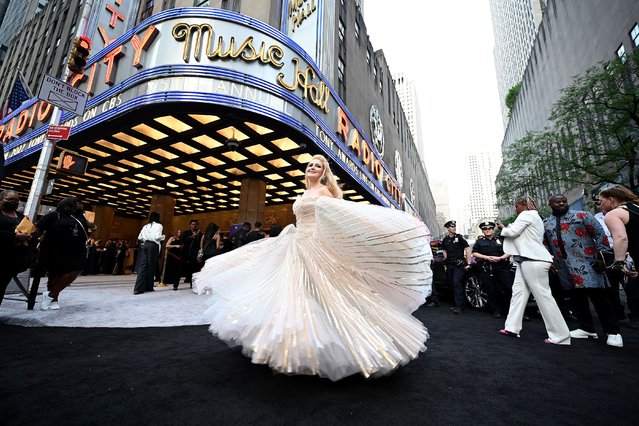 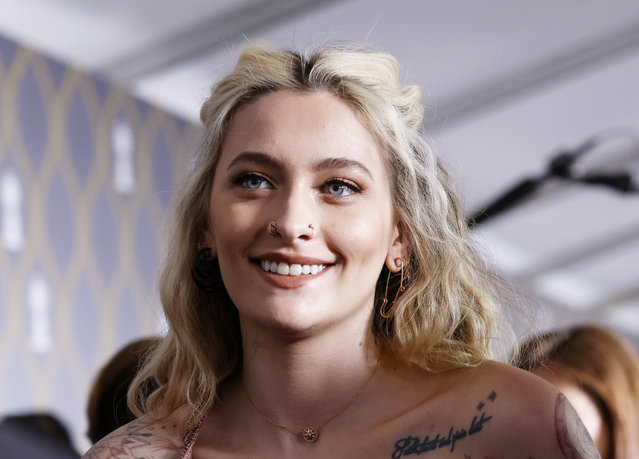 Michael Jackson’s daughter Paris Jackson arrives on the red carpet at The 75th Annual Tony Awards at Radio City Music Hall on June 12, 2022 in New York City. MJ the Musical is a big contender this year, being nominated for 10 Tony awards. (Photo by John Angelillo/UPI/Rex Features/Shutterstock) 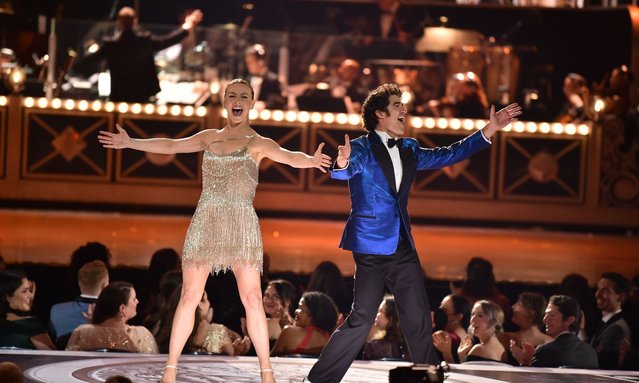 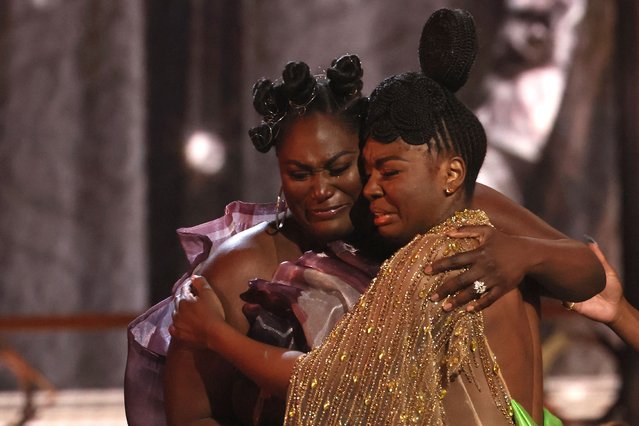 Joaquina Kalukango embraces Danielle Brooks (L) as she accepts the award for Best Performance by an Actress in a Leading Role in a Musical for “Paradise Square” at the 75th Annual Tony Awards in New York City, U.S., June 12, 2022. (Photo by Brendan McDermid/Reuters) 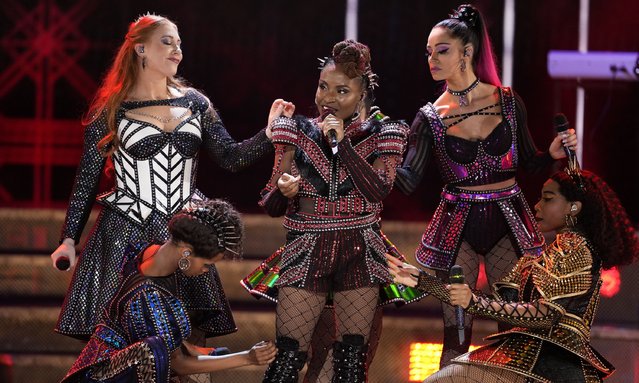 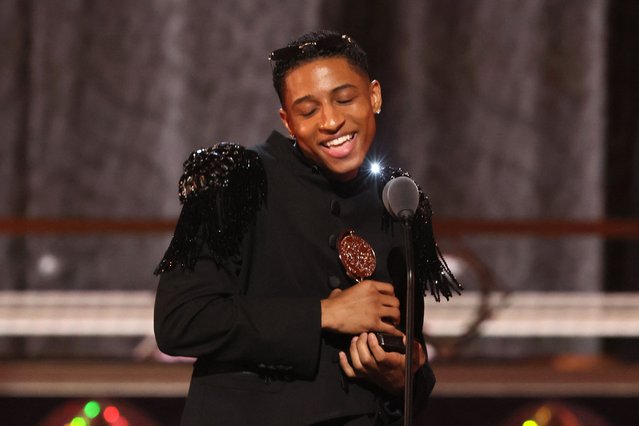 Myles Frost accepts the award for Best Performance by an Actor in a Leading Role in a Musical for MJ at the 75th Annual Tony Awards in New York City, U.S., June 12, 2022. (Photo by Brendan McDermid/Reuters) 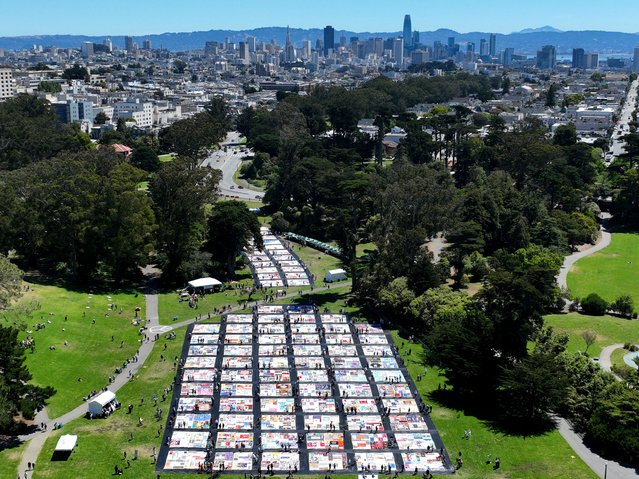 In an aerial view, over 3,000 panels of the AIDS Memorial Quilt are displayed on the lawn at Robin Williams Meadow in Golden Gate Park on June 11, 2022 in San Francisco, California. The National AIDS Memorial is marking the 35th anniversary of the AIDS Memorial Quilt with more than 3,000 panels of the Quilt being displayed in Golden Gate Park. It is the largest display of the Quilt in San Francisco history. The Quilt will be on display on June 11th and 12th. (Photo by Justin Sullivan/Getty Images) 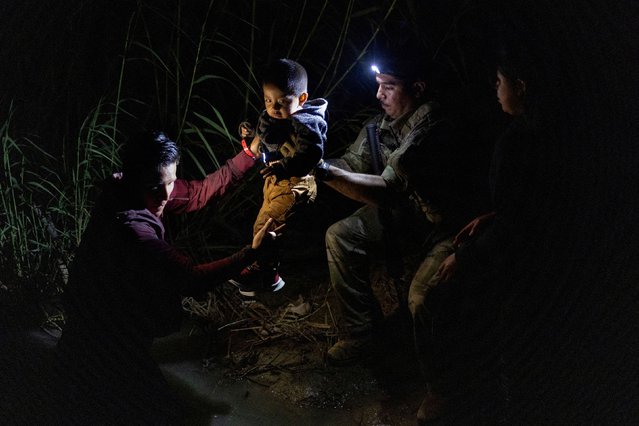 A member of the Texas Army National Guard helps grab two year old Juan Miguel of Guatemala from David, an asylum seeking migrant from Ecuador, after the migrants used a raft to cross the Rio Grande river into the United States from Mexico in Roma, Texas, June 9, 2022. (Photo by Adrees Latif/Reuters) 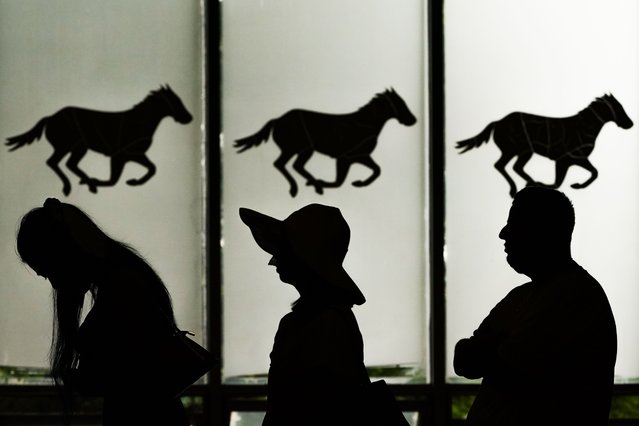 Spectators wait in line at a concession stand before the 154th running of the Belmont Stakes horse race, Saturday, June 11, 2022, at Belmont Park in Elmont, N.Y. (Photo by Frank Franklin II/AP Photo) 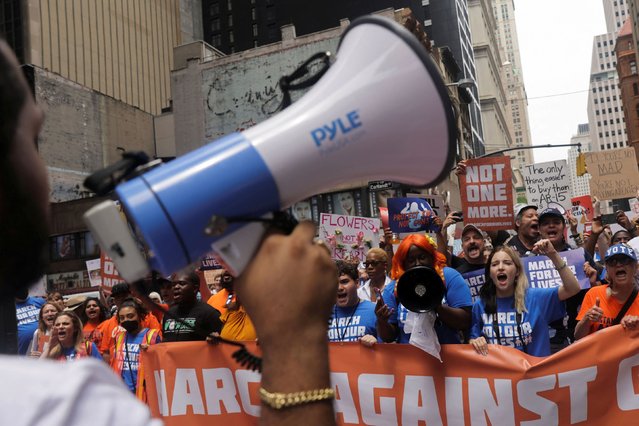