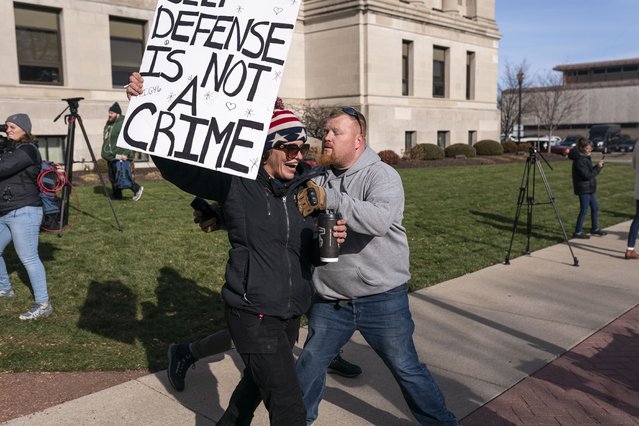 Emily Chaill, a supporter of Kyle Rittenhouse, reacts as a not guilt verdict is read while another man moves her away from an opposing crowd in front of the Kenosha County Courthouse on November 19, 2021 in Kenosha, Wisconsin. t the Kenosha County Courthouse on November 19, 2021 in Kenosha, Wisconsin. Rittenhouse was found not guilty of all charges in the shooting of three demonstrators, killing two of them, during a night of unrest that erupted in Kenosha after a police officer shot Jacob Blake seven times in the back while being arrested in August 2020. Rittenhouse, from Antioch, Illinois, claimed self defense who at the time of the shooting was armed with an assault rifle. (Photo by Nathan Howard/Getty Images) 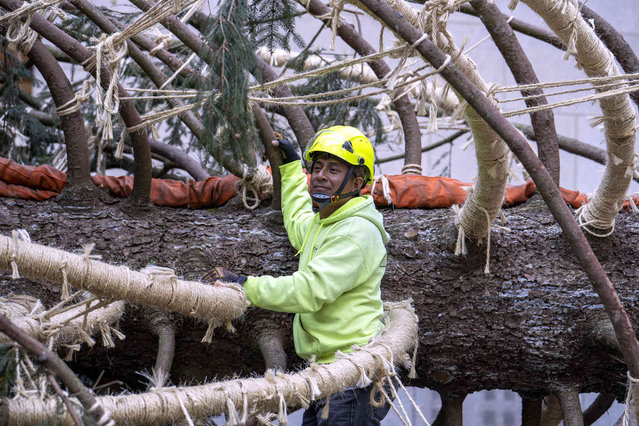 The 79-foot tall Rockefeller Center Christmas Tree arrives from Elkton, Md., as a worker gets it ready at Rockefeller Plaza, Saturday, November 13, 2021, in New York. New York City ushered in the holiday season with the arrival of the Norway spruce that will serve as one of the world's most famous Christmas trees. (Photo by Dieu-Nalio Chery/AP Photo) 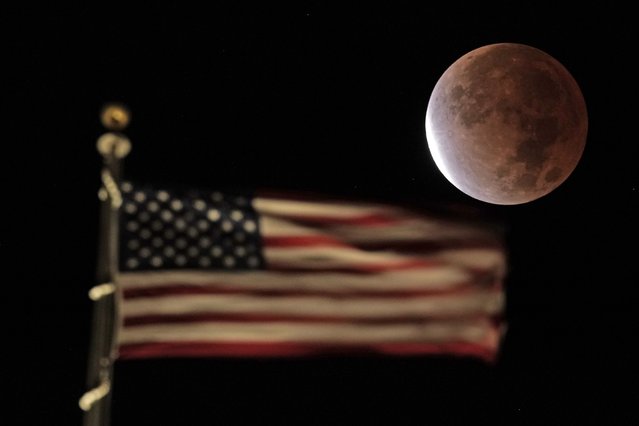 The earth's shadow covers the full moon during a partial lunar eclipse as it sets beyond the U.S. flag on top of a building, Friday, November 19, 2021, in downtown Kansas City, Mo. (Photo by Charlie Riedel/AP Photo) 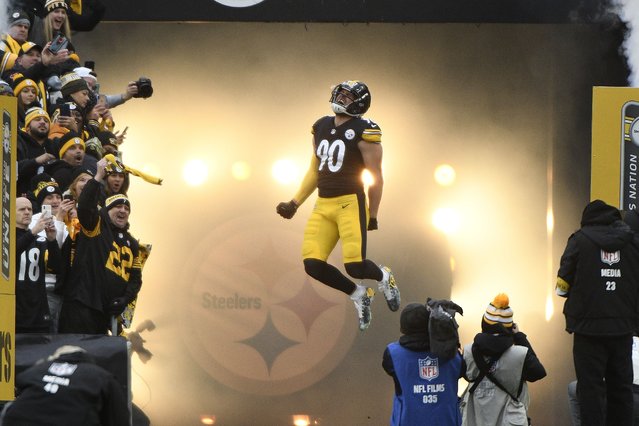 Pittsburgh Steelers outside linebacker T.J. Watt (90) is introduced before an NFL football game against the Detroit Lions in Pittsburgh, Sunday, November 14, 2021. (Photo by Don Wright/AP Photo) 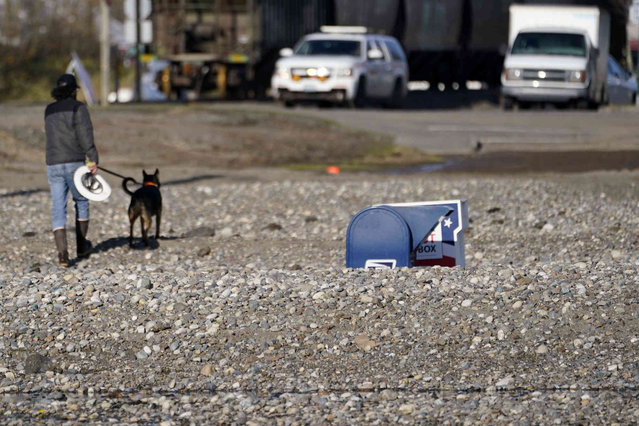 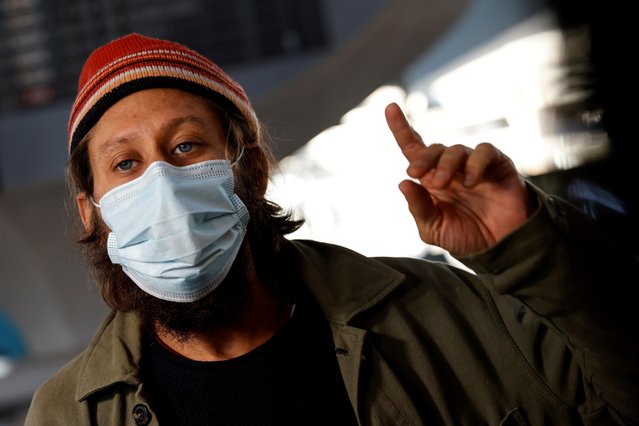 American journalist Danny Fenster, who was released from prison on Monday after negotiations between former U.S. diplomat Bill Richardson and the ruling military junta in Myanmar, speaks to the media at JFK International Airport in New York, U.S. November 16, 2021. (Photo by Shannon Stapleton/Reuters) 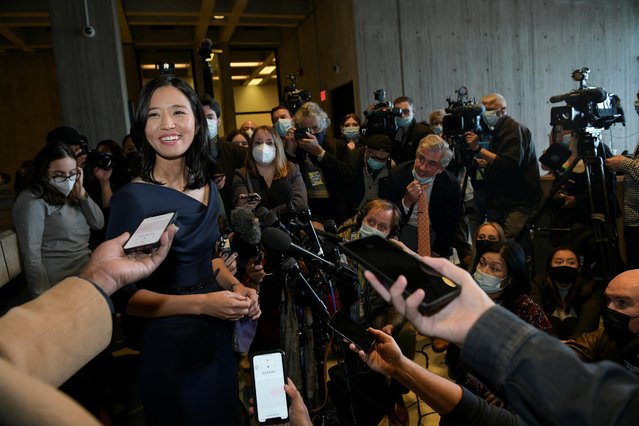 Michelle Wu addresses the press after she is sworn-in as Mayor, becoming the first woman and first person of color elected to the office, in Boston, Massachusetts, U.S., November 16, 2021. (Photo by Faith Ninivaggi/Reuters) 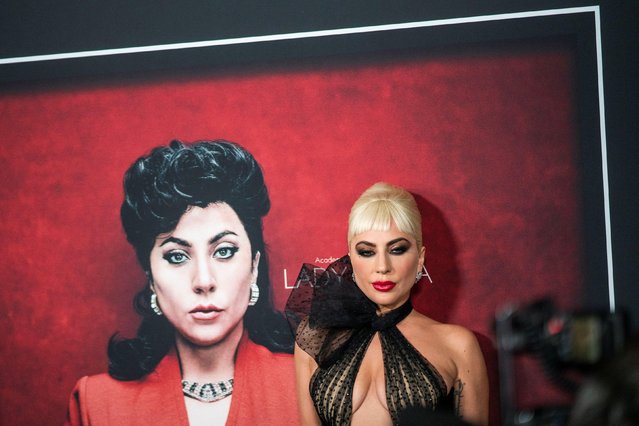 Cast member Lady Gaga poses for a photo as she attends the Premiere of the film “House of Gucci” at Jazz at Lincoln Center in New York City, New York, U.S., November 16, 2021. (Photo by Eduardo Munoz/Reuters) 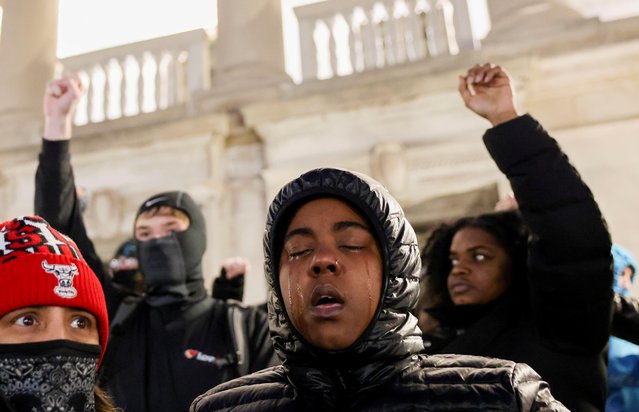 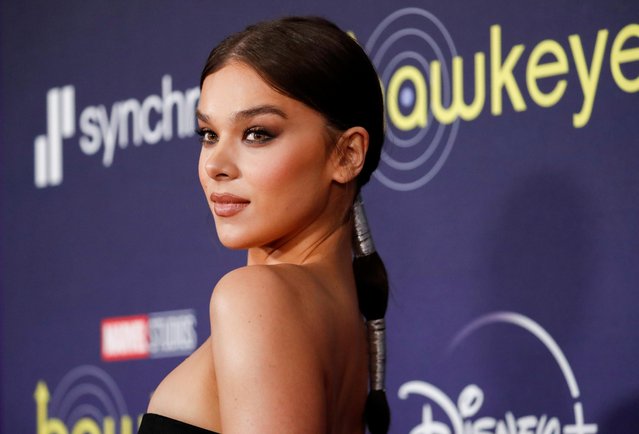 American actress Hailee Steinfeld poses for a picture during the premiere of the television series Hawkeye at El Capitan theatre in Los Angeles, California, U.S. November 17, 2021. (Photo by Mario Anzuoni/Reuters) 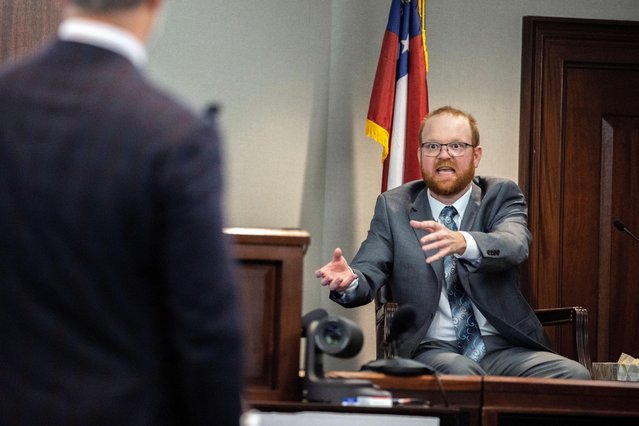 Travis McMichael speaks from the witness stand during the trial of Greg McMichael, his son Travis McMichael and William “Roddie” Bryan in the Glynn County Courthouse, as the murder trial over the killing of Ahmaud Arbery, in Brunswick, Georgia, U.S. November 17, 2021. (Photo by Stephen B. Morton/Pool via Reuters) 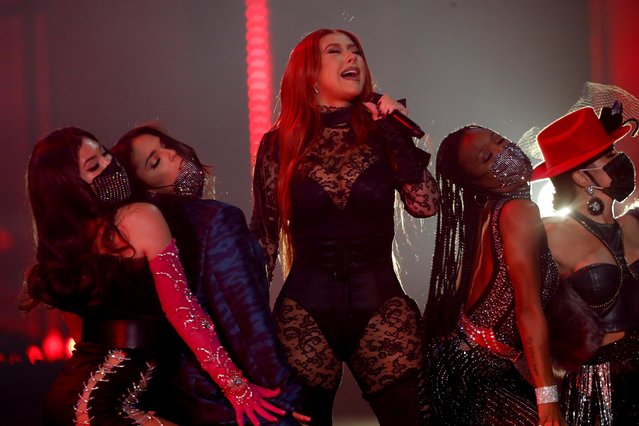 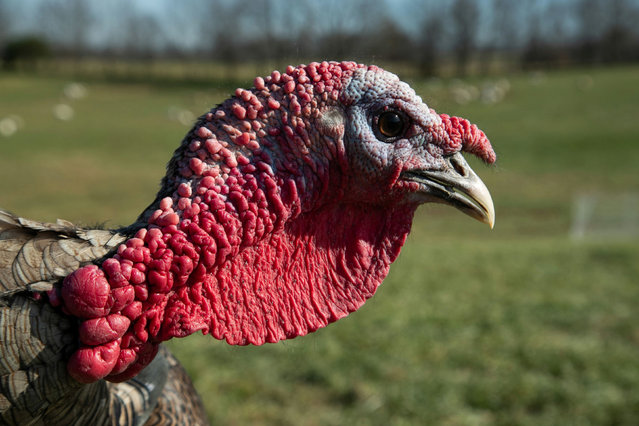 A heritage turkey shows his red flappy wattle at Elmwood Stock Farm ahead of the Thanksgiving holiday in Georgetown, Kentucky, U.S. November 16, 2021. (Photo by Amira Karaoud/Reuters) 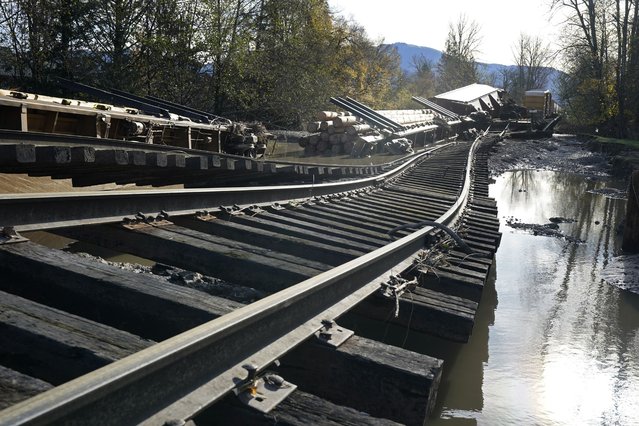 Derailed railroad cars sit near flood-damaged tracks at a BNSF rail yard Wednesday, November 17, 2021, in Sumas, Wash. An atmospheric river – a huge plume of moisture extending over the Pacific and into Washington and Oregon – caused heavy rainfall in recent days, bringing major flooding in the area. (Photo by Elaine Thompson/AP Photo) 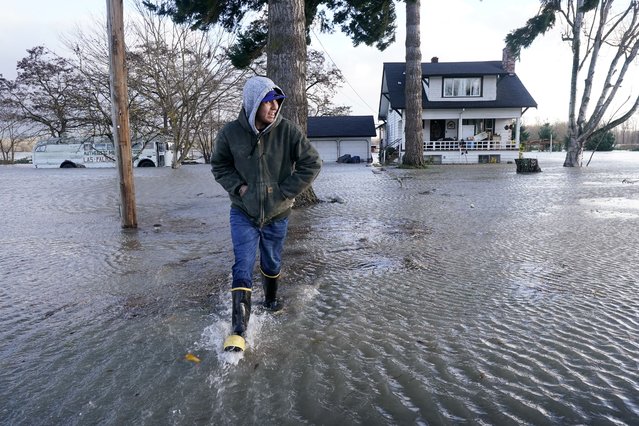 Benjamin Lopez steps from floodwater surrounding his parents home Monday, November 15, 2021, in Sedro-Woolley, Wash. The heavy rainfall of recent days brought major flooding of the Skagit River that is expected to continue into at least Monday evening. (Photo by Elaine Thompson/AP Photo) 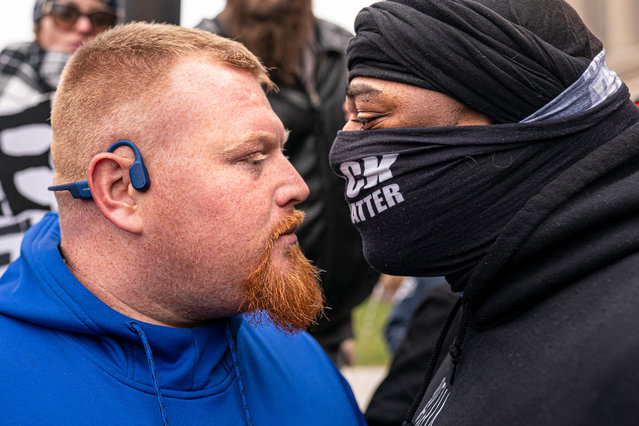 A supporter of Kyle Rittenhouse (L) argues with a Black Lives Matter supporter in front of the Kenosha County Courthouse while the jury deliberates the Rittenhouse trial on November 16, 2021 in Kenosha, Wisconsin. Rittenhouse is accused of shooting three demonstrators, killing two of them, during a night of unrest that erupted in Kenosha after a police officer shot Jacob Blake seven times in the back while being arrested in August 2020. Rittenhouse, from Antioch, Illinois, was 17 at the time of the shooting and armed with an assault rifle. He faces counts of felony homicide and felony attempted homicide. (Photo by Nathan Howard/Getty Images) Kenneth Warner races into the water to help rescue the driver of a car that went into the flooded Nooksack River, Tuesday, November 16, 2021, in Ferndale, Wash. Warner led a half-dozen citizens into the river, where they stopped the car from floating further and muscled it back onshore. No one was injured. An atmospheric river, a huge plume of moisture extending over the Pacific and into Washington and Oregon, caused heavy rainfall in recent days, bringing major flooding in the area. (Photo by Elaine Thompson/AP Photo) 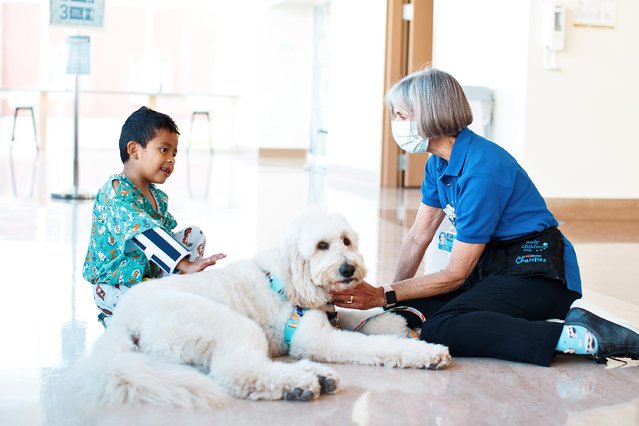 Kristin Gist and her dog Ollie greet patient Ricardo Martin, 6, with the return of the canine program at Rady Children's Hospital as the hospital eases some of their COVID-19 restrictions in San Diego, California, U.S., November, 11, 2021. (Photo by Mike Blake/Reuters) 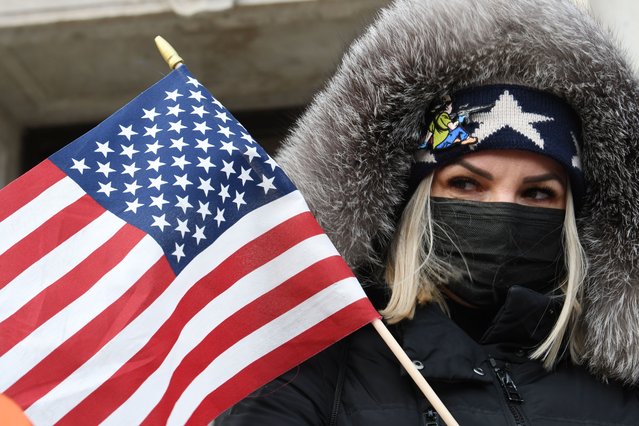 Supporters and opponents of Kyle Rittenhouse protest in front of the Kenosha (Wisconsin) Courthouse Tuesday November 16, 2021, as the jury begins deliberations in the Kyle Rittenhouse trial. Rittenhouse, then 17, shot three people, two of them fatally during the unrest that followed the shooting of Jacob Blake seven times by a Kenosha police officer. (Photo by Mark Hertzberg/ZUMA Press Wire/Rex Features/Shutterstock) 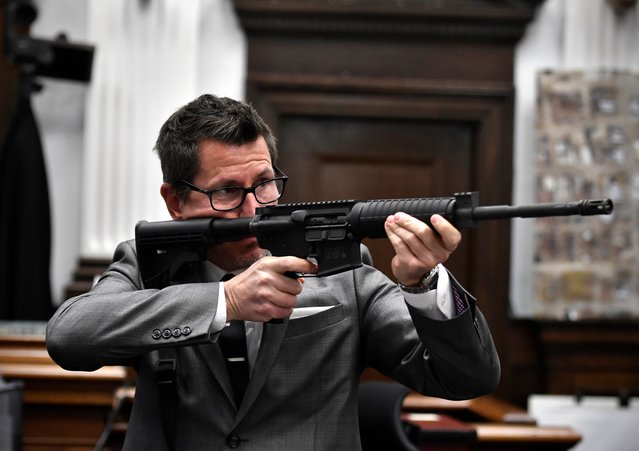