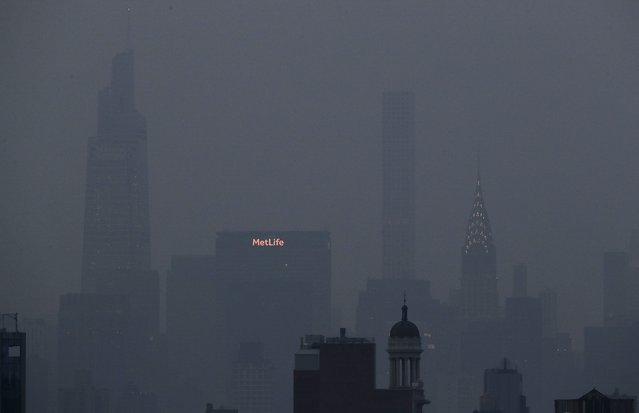 The Met Life and Chrysler buildings glow through a thick haze hanging over Manhattan, Tuesday, July 20, 2021, in New York. Wildfires in the American West, including one burning in Oregon that's currently the largest in the U.S., are creating hazy skies as far away as New York as the massive infernos spew smoke and ash into the air in columns up to six miles high. (Photo by Julie Jacobson/AP Photo) 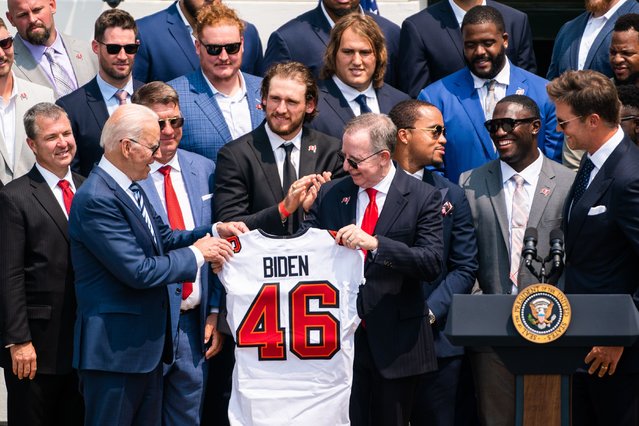 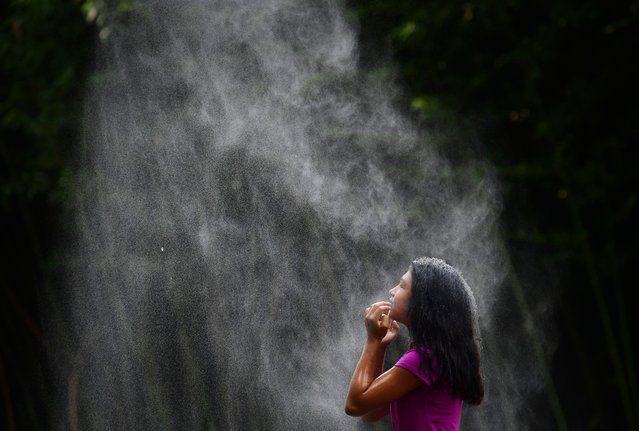 Scarlett Zelaya, 10, of Woodbridge, VA cools off under a water mister while visiting the Smithsonian National Zoological Park on Wednesday July 21, 2021 in Washington, DC. (Photo by Matt McClain/The Washington Post) 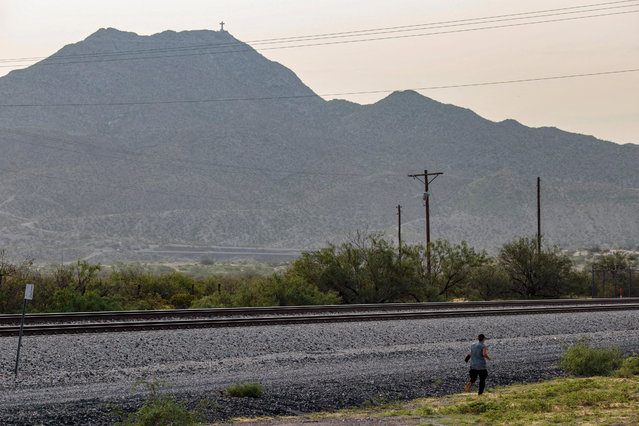 A Guatemalan migrant attempts to enter the United States in Sunland Park, New Mexico after crossing the US-Mexico border on July 22, 2021. Many advocates from national organizations urge President Biden to end Title 42 expulsions, a public health order issued in March 2020 by the Centers for Disease Control and Prevention to prevent the cross-border spread of Covid-19 resulting of hundreds of thousands of migrants expelled within hours of detention and therefore deny the opportunity to state their case for staying in the country. (Photo by Paul Ratje/AFP Photo) 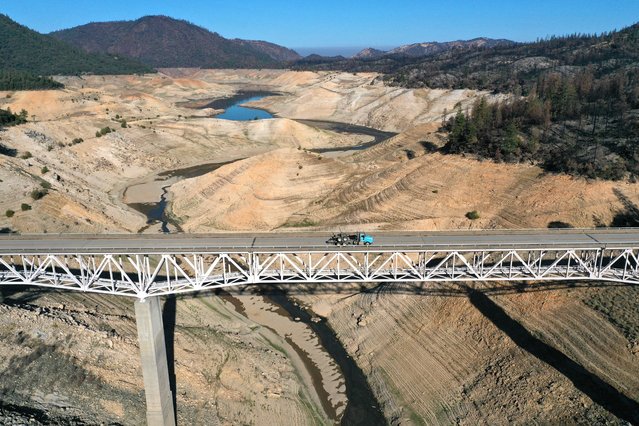 In an aerial view, the Enterprise Bridge crosses over a section of Lake Oroville that was previously underwater on July 22, 2021 in Oroville, California. As the extreme drought emergency continues in California, Lake Oroville's water levels are continuing to drop to 28 percent of capacity. State water officials say that Lake Oroville's Edward Hyatt Powerplant might be forced to shut down the hydroelectric plant as soon as August or September if water levels continue to drop. (Photo by Justin Sullivan/Getty Images) 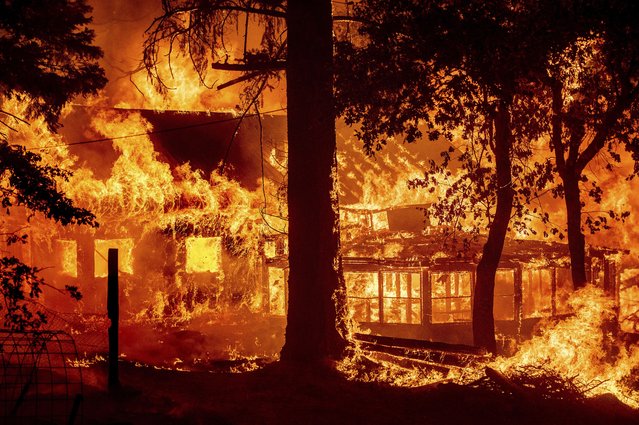 Flames from the Dixie Fire consume a home in the Indian Falls community of Plumas County, Calif., Saturday, July 24, 2021. The fire destroyed multiple residences as it tore through the area. (Photo by Noah Berger/AP Photo) 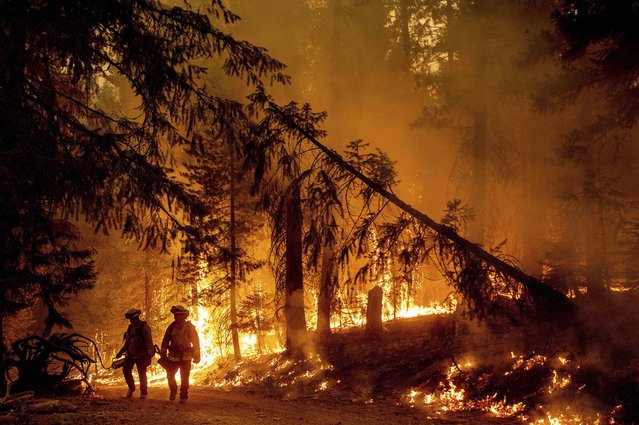 Firefighters light a backfire to stop the Dixie Fire from spreading near Prattville in Plumas County, Calif., on Friday, July 23, 2021. (Photo by Noah Berger/AP Photo) 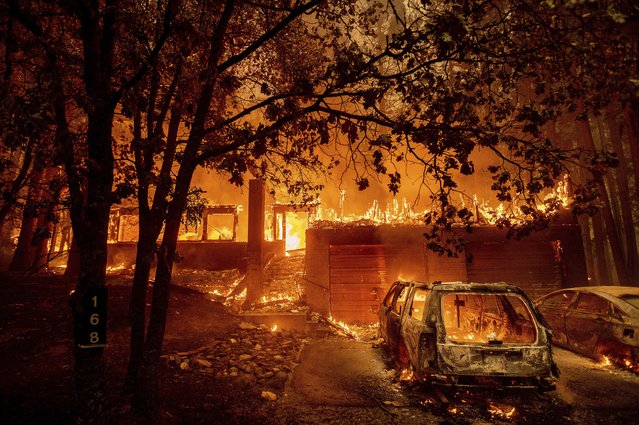 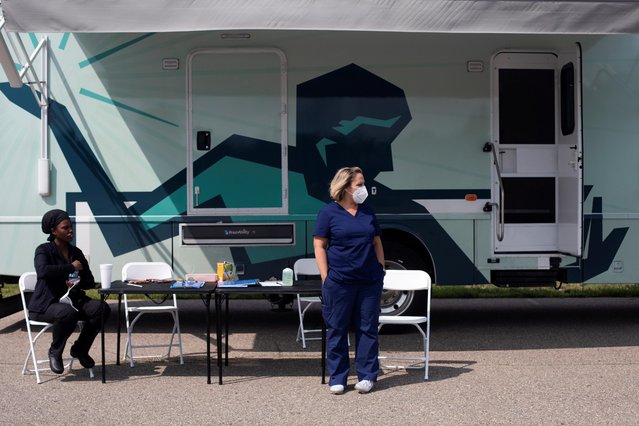 Nurses wait for people to come by to receive their COVID-19 vaccine at a mobile pop-up clinic hosted by the Detroit Health Department with the Detroit Public Schools Community District at East English Village Preparatory Academy in Detroit, Michigan, July 21, 2021. (Photo by Emily Elconin/Reuters) 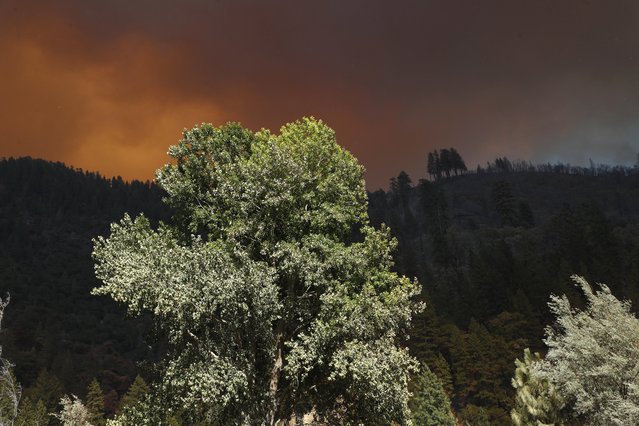 A tree in sunlight as heavy plumes of smoke billowing from the Dixie fire above the Plumas National Forest in Plumas and Butte Counties in California, USA, 21 July 2021. The fire has grown to 85,479 acres with 15 percent containment. (Photo by John G. Mabanglo/EPA/EFE) 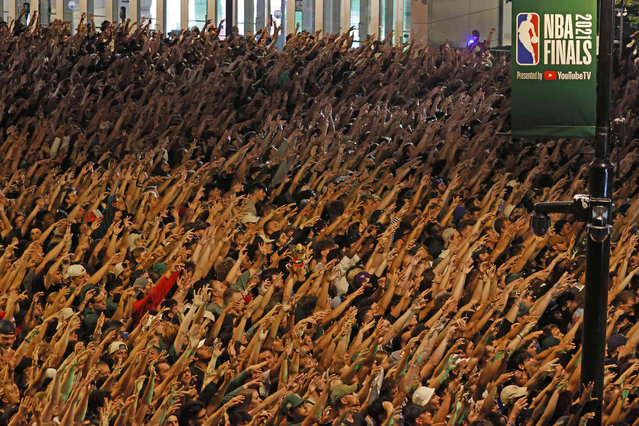 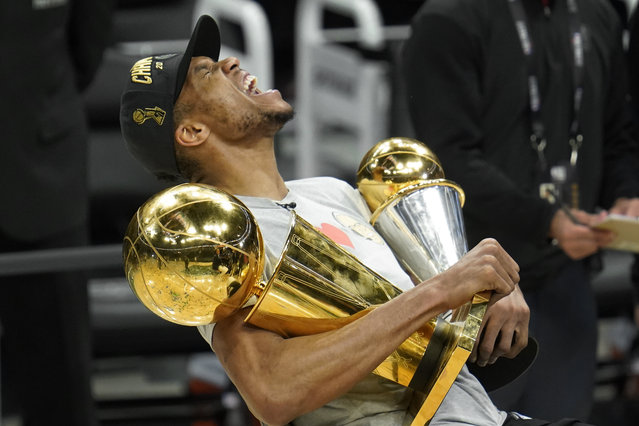 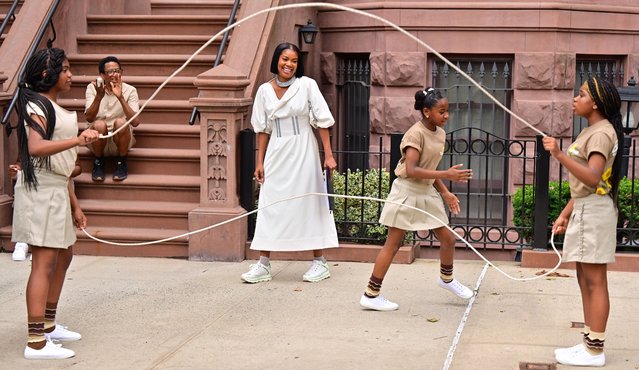 American actress Gabrielle Union seen on the set of “The Perfect Find” in Harlem on July 21, 2021 in New York City. (Photo by James Devaney/GC Images) 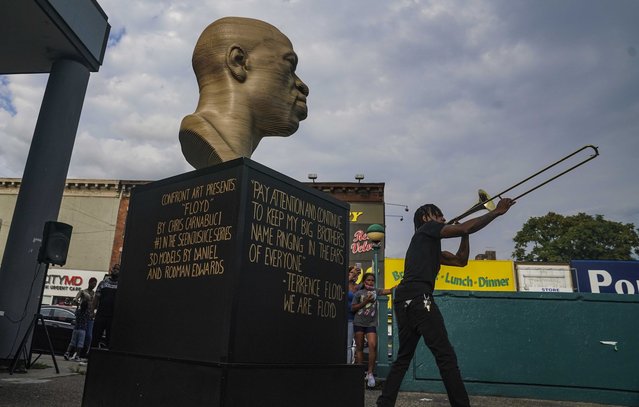 Jonte “Jonoel” Lancaster plays trombone during a celebration for the refurbished George Floyd statue, after it was vandalized following its Juneteenth installation, Thursday, July 22, 2021 in the Flatbush section of Brooklyn, N.Y. Councilwoman Farah Louis said “this culminating ceremony thank the Flatbush community for having the statue here to educate people on systemic racism” and for coming to together to restore it. (Photo by Bebeto Matthews/AP Photo) 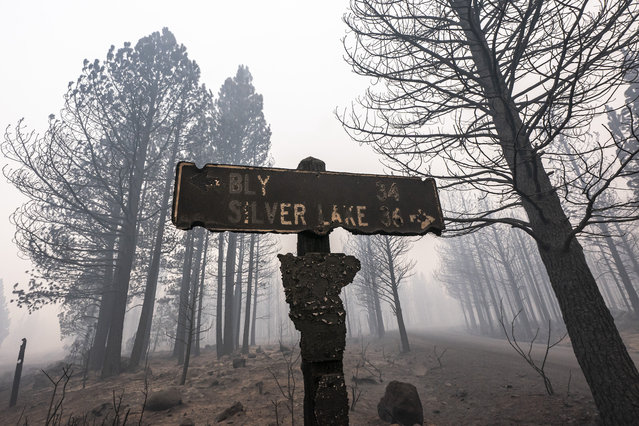 A sign damaged by the Bootleg Fire stands among the haze on Thursday, July 22, 2021, near Paisley, Ore. (Photo by Nathan Howard/AP Photo) 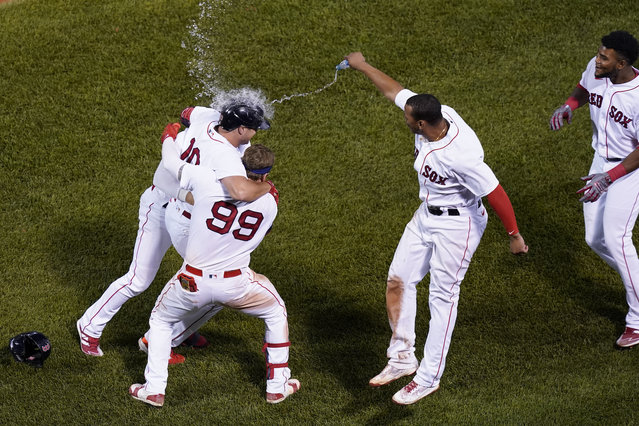 Boston Red Sox's Hunter Renfroe (10) is congratulated after he drove in the winning run with a sacrifice fly in the 10th inning of the team's baseball game against the New York Yankees at Fenway Park, Thursday, July 22, 2021, in Boston. The Red Sox won 5-4. (Photo by Elise Amendola/AP Photo) 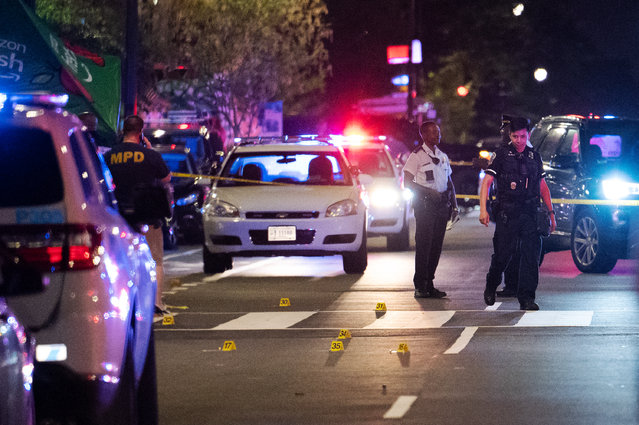 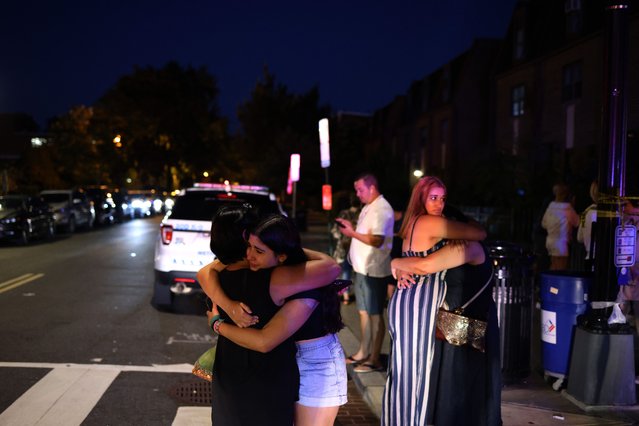 People embrace near the site of a shooting on July 22, 2021 in Washington, DC. Gunfire erupted on a busy street, injuring two and sending others fleeing for safety. A dark sedan was being sought in connection with the shooting and the two injured were expected to survive, according to published reports. (Photo by Anna Moneymaker/Getty Images) 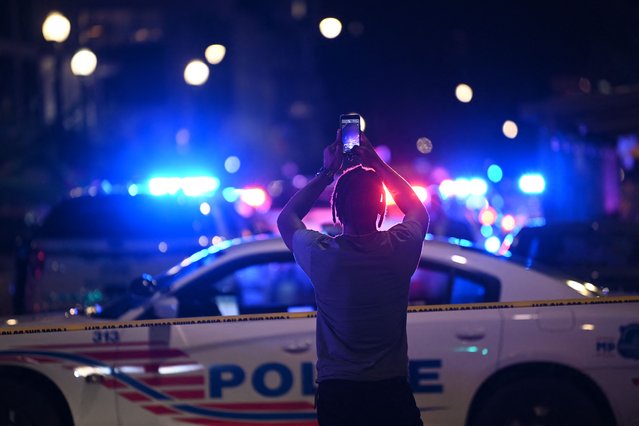 A man uses his phone in front of police cars blocking a street after a shooting at a restaurant in Washington, DC, on July 22, 2021. (Photo by Brendan Smialowski/AFP Photo)
Edit Del
26 Jul 2021 08:23:00, post received 0 comments
Publication archive:
←   →
Popular tags:
All tags
Last searches: