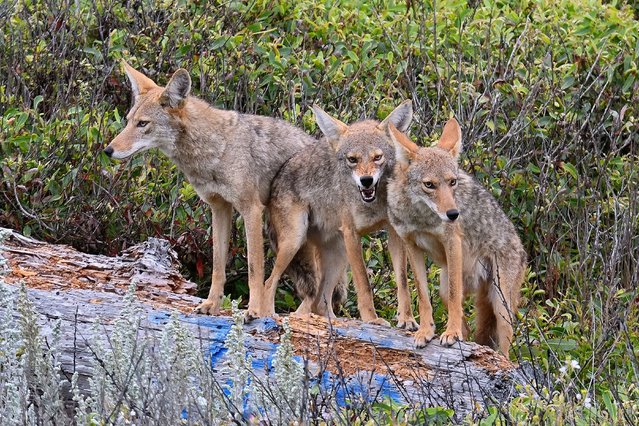 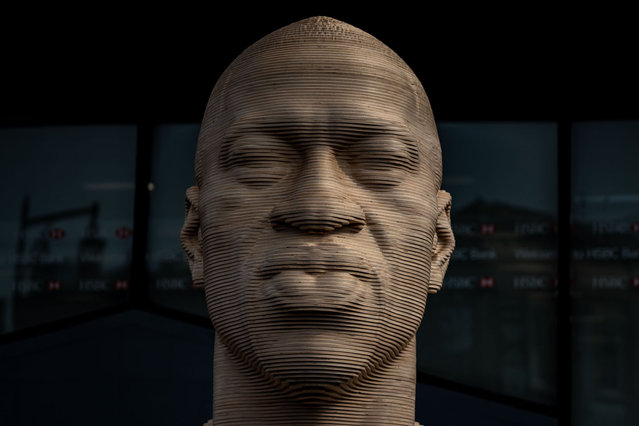 A statue of George Floyd is unveiled at Flatbush Junction on June 19, 2021, in the Brooklyn borough of New York City. Mr. Floyds murder, at the hands of Minneapolis police officer Derek Chauvin, last year fueled a global movement for racial justice. The unveiling of the statue happened just days after Juneteenth was declared a federal holiday. (Photo by David Dee Delgado/Getty Images) 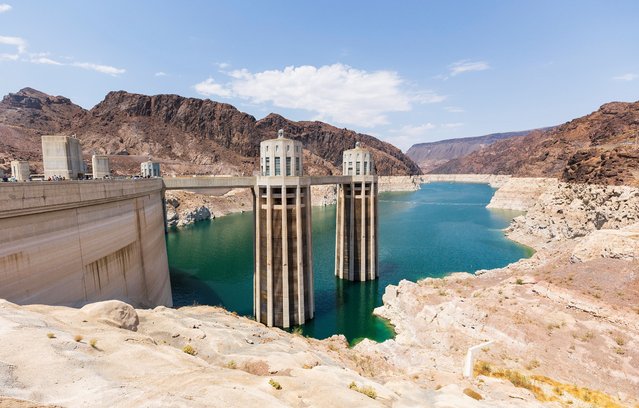 A view of the Hoover Dam and the white ring of mineralized stone indicating the drop in water levels of Lake Mead National Recreation Area in Boulder City, Nevada, USA, 19 June 2021. Lake Mead, the United States' largest reservoir, which was formed by the construction of the Hoover Dam along the Colorado River east of Las Vegas, Nevada on the Nevada/Arizona border, is at the lowest levels ever recorded since being built as a result of drought, high temperatures and water usage. (Photo by Justin Lane/EPA/EFE) 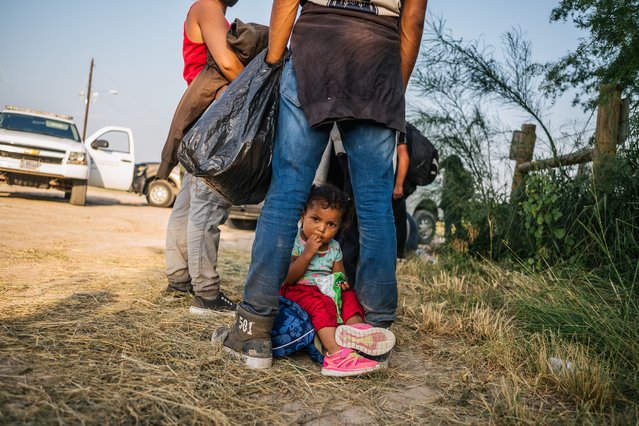 Immigrants from Honduras wait to be accounted for and taken to a border patrol processing facility after crossing the Rio Grande into the U.S. on June 21, 2021 in La Joya, Texas. A surge of mostly Central American immigrants crossing into the United States has challenged U.S. immigration agencies along the U.S. Southern border. (Photo by Brandon Bell/Getty Images) 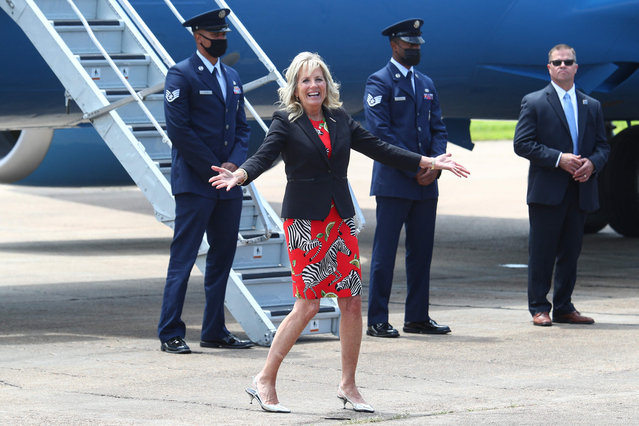 US first lady Jill Biden reacts to a question from a news reporter at Jackson-Medgar Wiley Evers International Airport, in Pearl, Mississippi, June 22, 2021. Biden is in the state to tour Covid-19 vaccination sites. (Photo by Tom Brenner/Pool via AFP Photo) 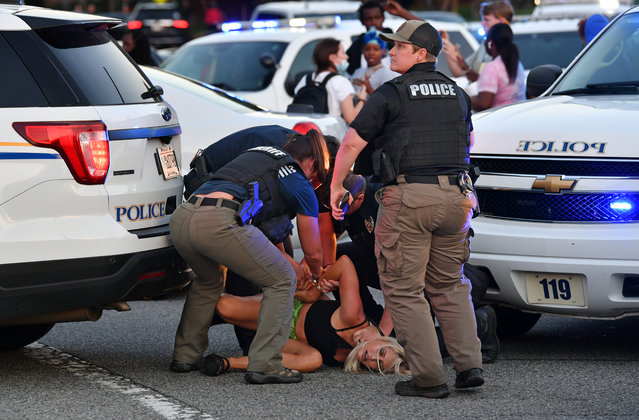 Police officers take a protester into custody during protest against police brutality and the arrest of two brothers Ricky and Travis Price in Rock Hill, South Carolina, United States on June 24, 2021. (Photo by Peter Zay/Anadolu Agency via Getty Images) 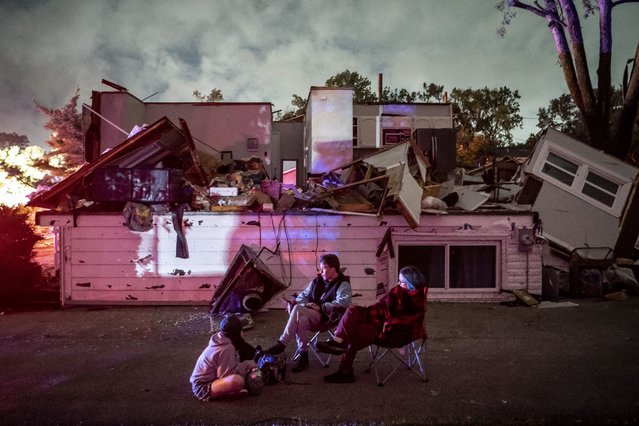 Bridget Casey sits in the driveway of her severely damaged home with her son Nate, 16, and daughter Marion, 14, after a tornado swept through the area in Woodridge, Ill., early Monday morning, June 21, 2021. Officials say a radar-confirmed tornado swept through suburban Chicago late Sunday, damaging homes, toppling trees, knocking out power and causing some injuries. (Photo by Rich Hein/Chicago Sun-Times via AP Photo) 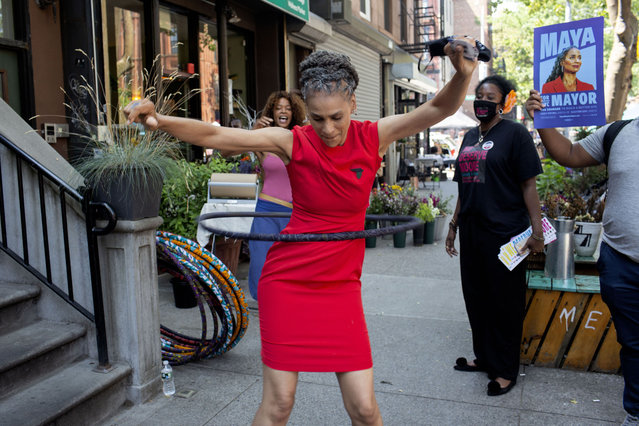 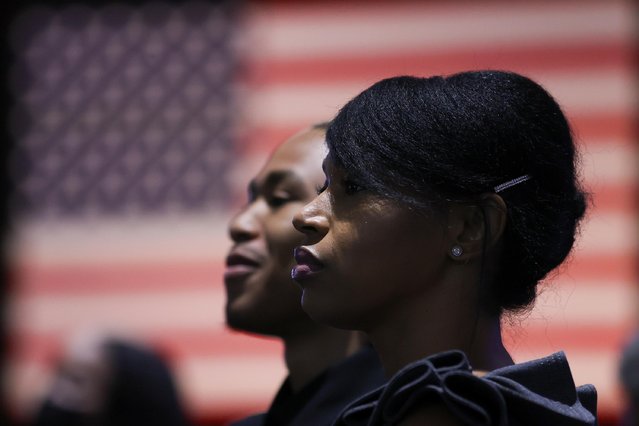 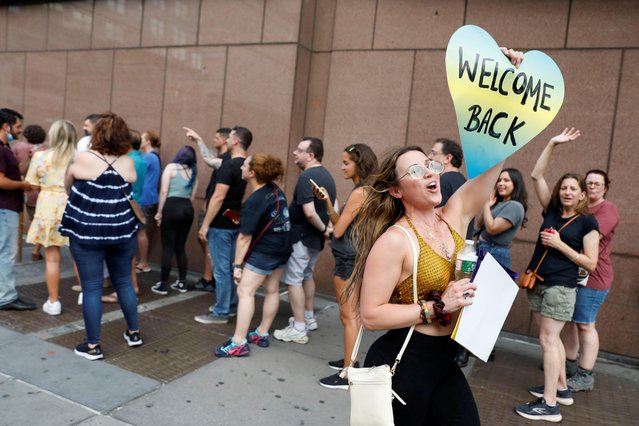 A fan holds a sign as people queue to attend Foo Fighters' show, which required proof of vaccination to enter, at the Madison Square Garden, in New York City, U.S., June 20, 2021. (Photo by Andrew Kelly/Reuters) 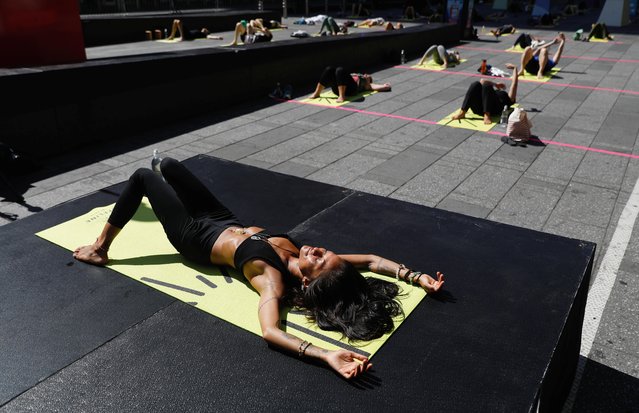 People participate in the “Solstice in Times Square: Mind Over Madness Yoga” to celebrate the summer solstice in New York, U.S. June 20, 2021. (Photo by Andrew Kelly/Reuters) 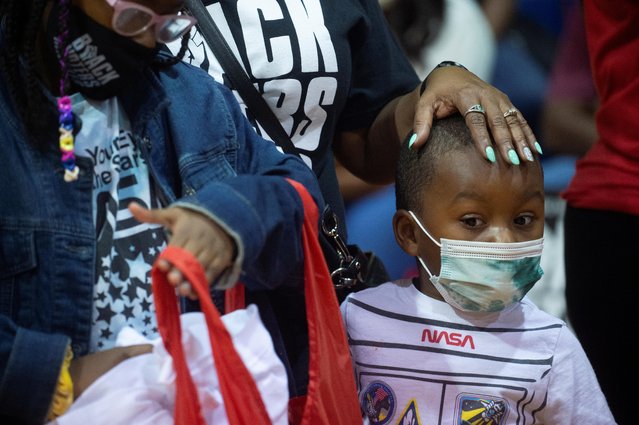 Ngozi Ra Harper, 4, attends the launch of the Freedom Ride for Voting Rights Bus Tour on Juneteenth in Jackson, Mississippi, June 19, 2021. The bus tour heads on Tuesday to South Carolina, then North Carolina, and will stop on Thursday in Charleston, West Virginia, home state of Democratic Senator Joe Manchin, who opposes the legislation coming before the Senate on Tuesday but has offered a compromise proposal. (Photo by Eric J. Shelton/Reuters) 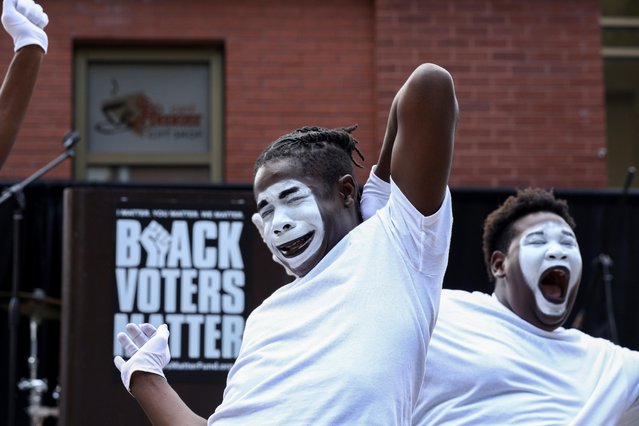 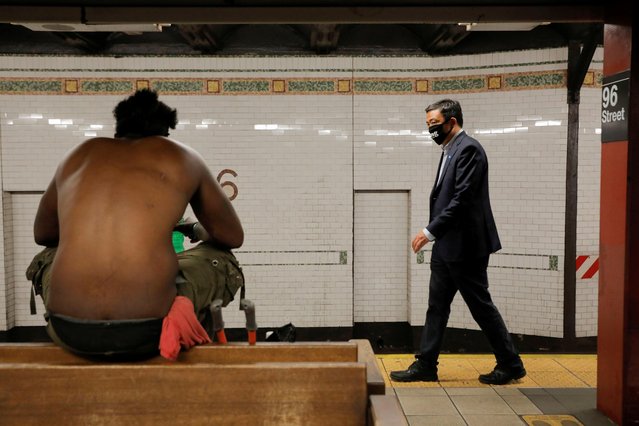 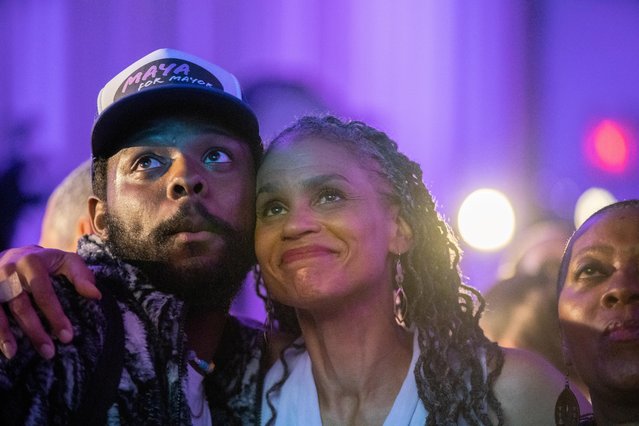 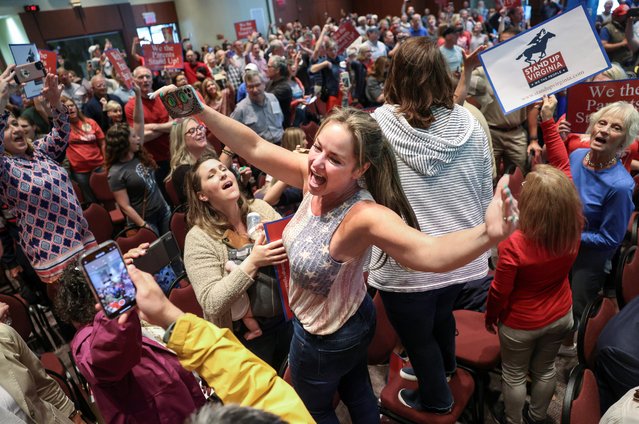 Elicia Brand leads a crowd of angry parents and community members in the singing of the Star Spangled Banner after a Loudoun County School Board meeting was halted by the school board because the crowd refused to quiet down, in Ashburn, Virginia, U.S. June 22, 2021. (Photo by Evelyn Hockstein/Reuters) A man is detained after a fight broke out during a Loudoun County School Board meeting which included a discussion of Critical Race Theory and transgender students, in Ashburn, Virginia, U.S. June 22, 2021. (Photo by Evelyn Hockstein/Reuters) 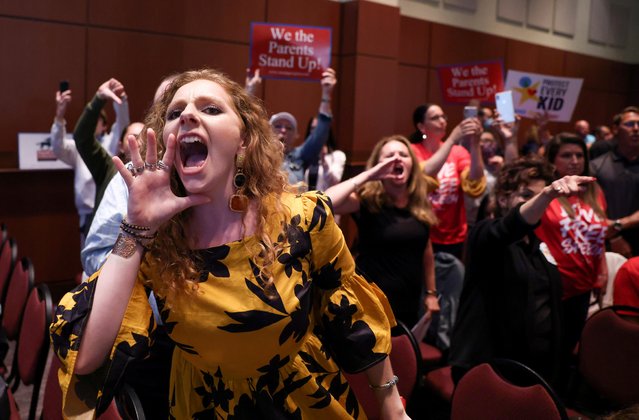 Angry parents and community members protest after a Loudoun County School Board meeting was halted by the school board because the crowd refused to quiet down, in Ashburn, Virginia, U.S. June 22, 2021. (Photo by Evelyn Hockstein/Reuters) 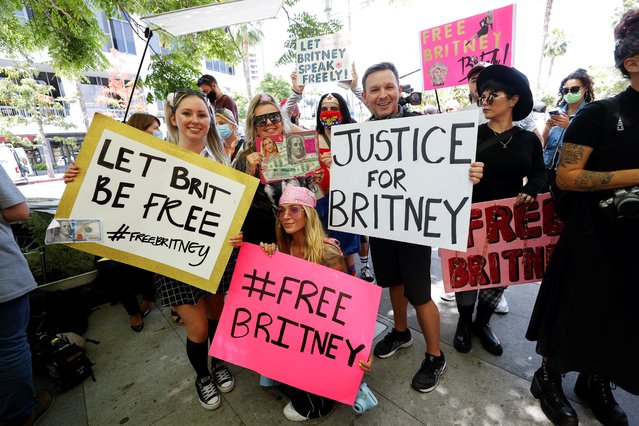 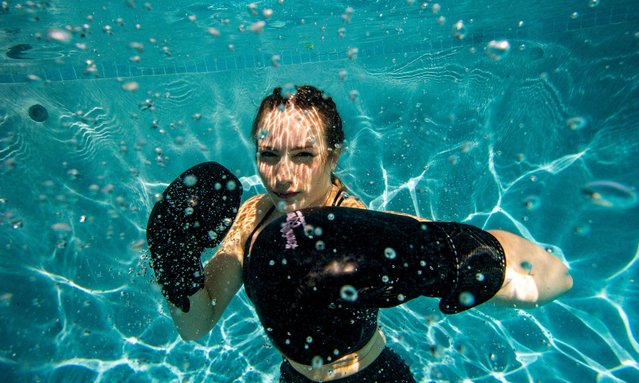 Professional Boxer Shayna Foppiano poses and practices her boxing skills underwater on June 18, 2021 in Saugus, Massachusetts. Foppiano is working her way up the ladder to a major prize fight, she may have been there by now if it hadn't been for the Covid-19 pandemic. (Photo by Joseph Prezioso/ZUMA Wire/Rex Features/Shutterstock)
Edit Del
28 Jun 2021 10:13:00, post received 0 comments
Publication archive:
←   →
Popular tags:
All tags
Last searches: