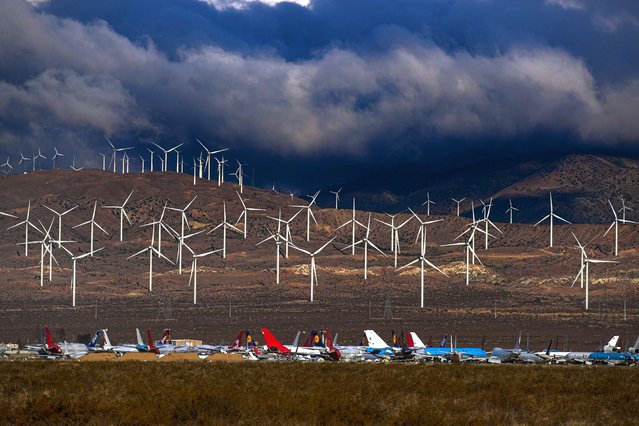 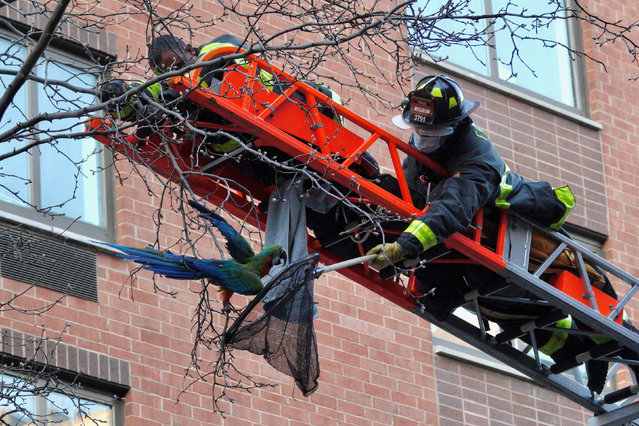 Firefighters rescue Dylan, a catalina macaw, from a tree in the Manhattan borough in New York on March 23, 2021. The bird escaped as he was being brought to see a vet by his owner. (Photo by Bill Swersey/Reuters) 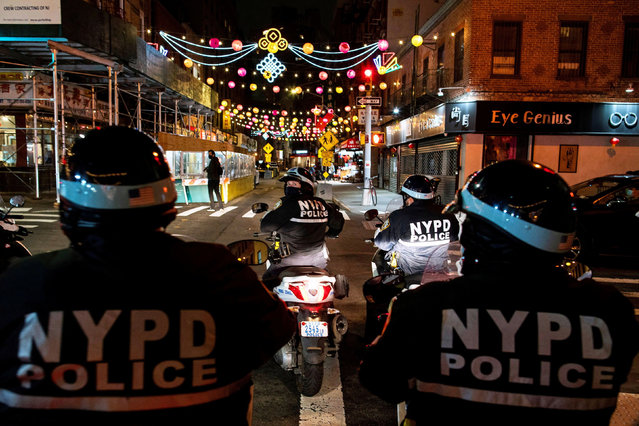 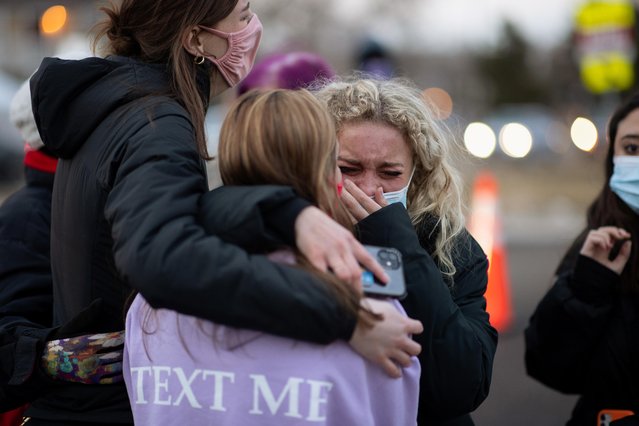 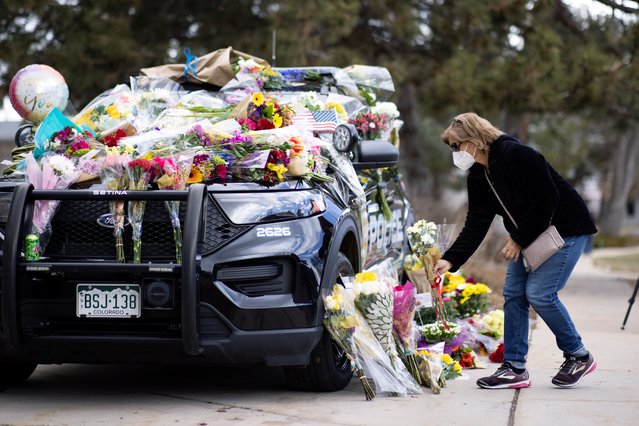 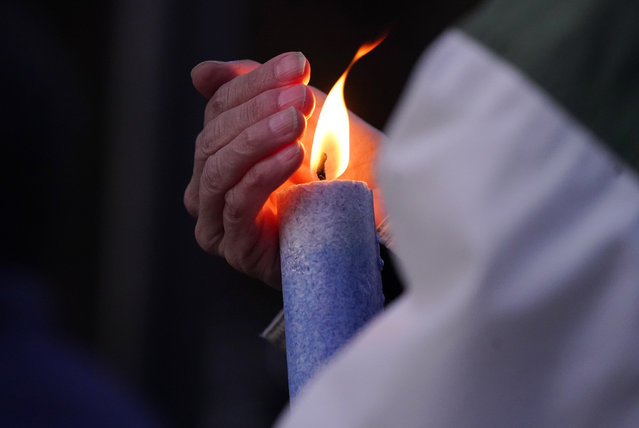 A mourner cups the flame from the wind while holding a candle at a vigil for the victims of a mass shooting in a grocery store earlier in the week, Wednesday, March 24, 2021, outside the courthouse in Boulder, Colo. (Photo by David Zalubowski/AP Photo) 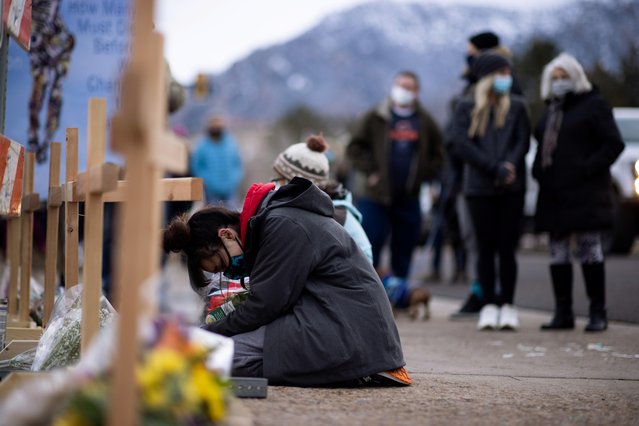 King Soopers employee Starr Samkus, 20, cries at the site of a mass shooting at King Soopers grocery store in Boulder, Colorado, March 23, 2021. Samkus was not working when the shooting occurred. (Photo by Alyson McClaran/Reuters) 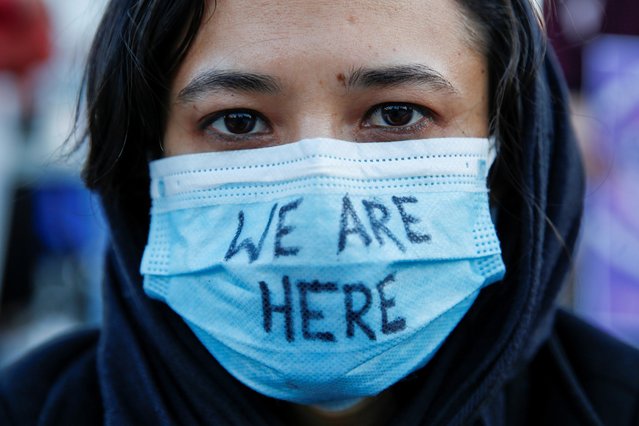 Mika Kie sits for a portrait during a rally and vigil to protest against violence directed at people of Asian descent, in Oakland, California, U.S. March 23, 2021. (Photo by Brittany Hosea-Small/Reuters) 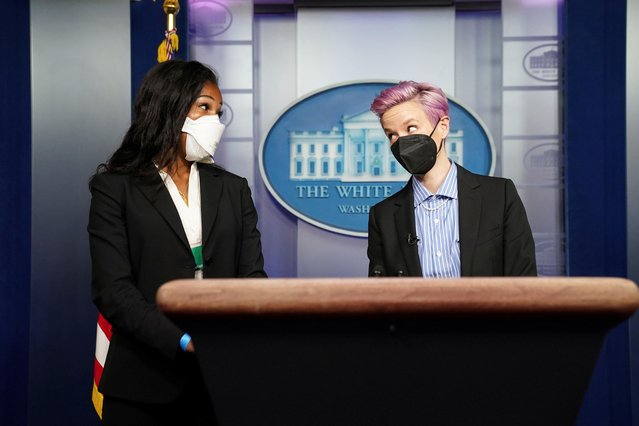 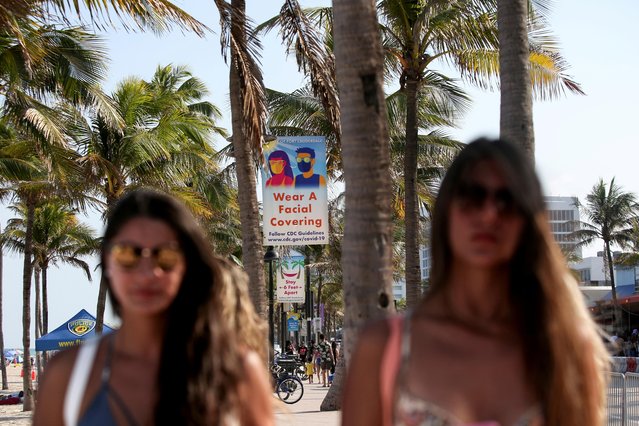 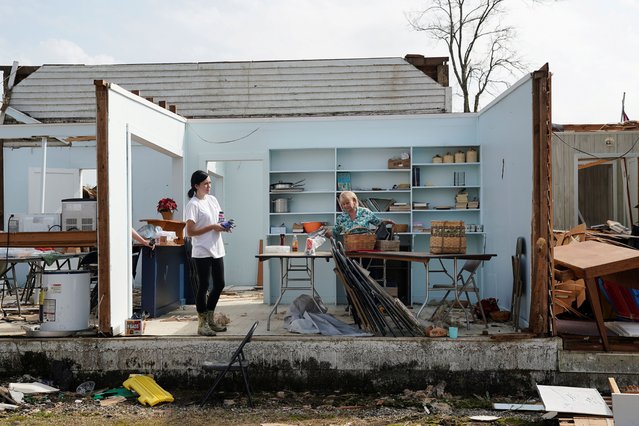 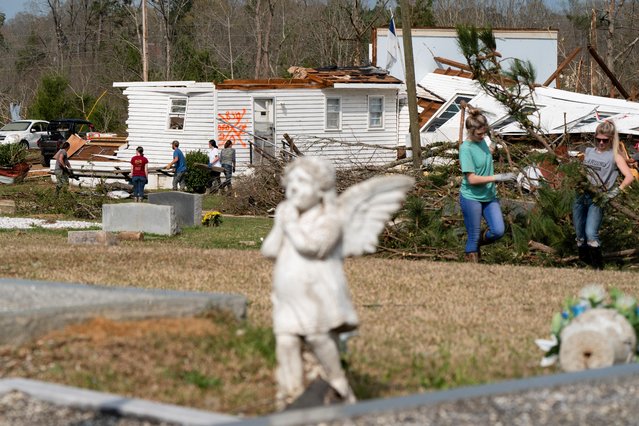 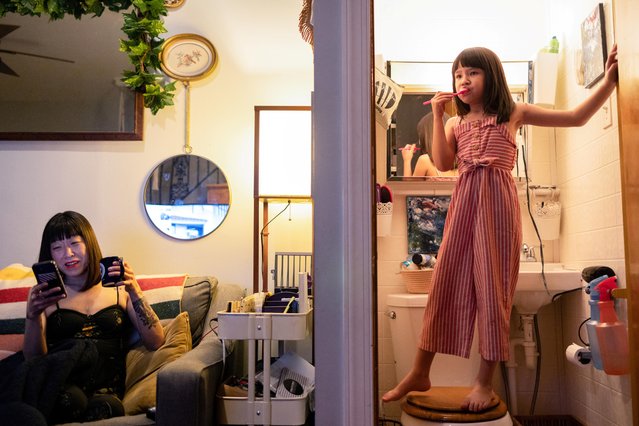 Stefany Stuber, 40, a Korean-American who speaks with her daughter Olivia Metzler, 7, about recent attacks on Asian Americans, sits on her phone while her daughter brushes her teeth in Philadelphia, Pennsylvania, U.S., March 23, 2021. (Photo by Hannah Beier/Reuters) 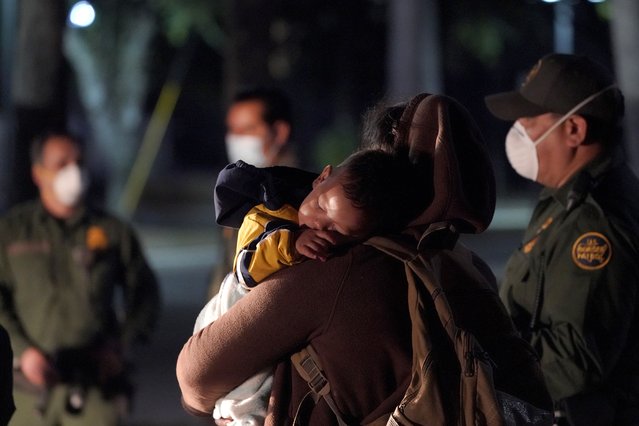 A migrant child sleeps on the shoulder of a woman at an intake area after turning themselves in upon crossing the U.S.-Mexico border, early Wednesday, March 24, 2021, in Roma, Texas. The Biden administration says that it's working to address the increase in migrants coming to the border. (Photo by Julio Cortez/AP Photo) 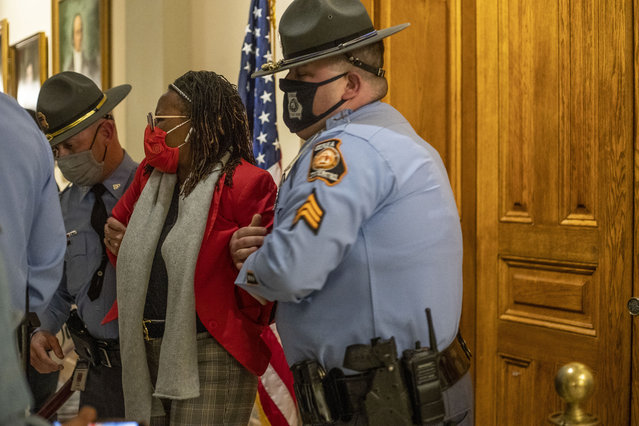 Rep. Park Cannon (D-Atlanta) is placed in handcuffs by Georgia State Troopers after being asked to stop knocking on a door that lead to Gov. Brian Kemp's office while Gov. Kemp was signing SB 202 behind closed doors at the Georgia State Capitol Building in Atlanta, Thursday, March 25, 2021. (Photo by Alyssa Pointer/Atlanta Journal-Constitution via AP Photo) 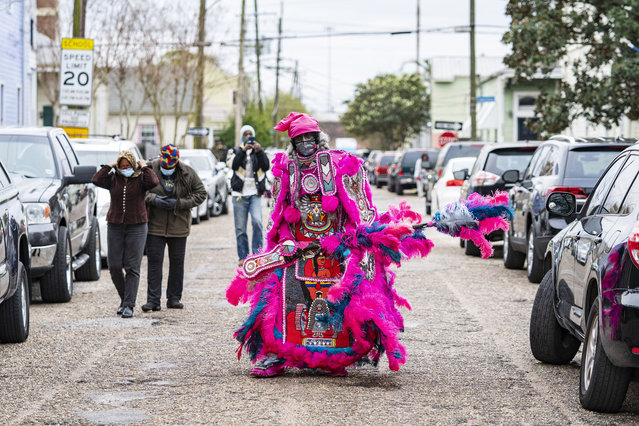 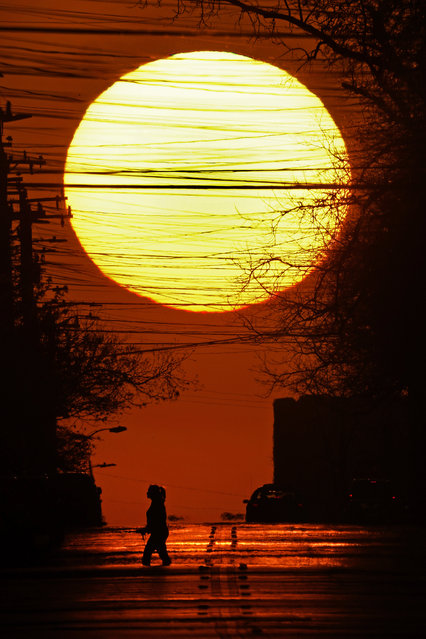 A woman is silhouetted by the setting sun as he crosses a street on the first day of spring Saturday, March 20, 2021, in San Antonio. (Photo by Charlie Riedel/AP Photo) 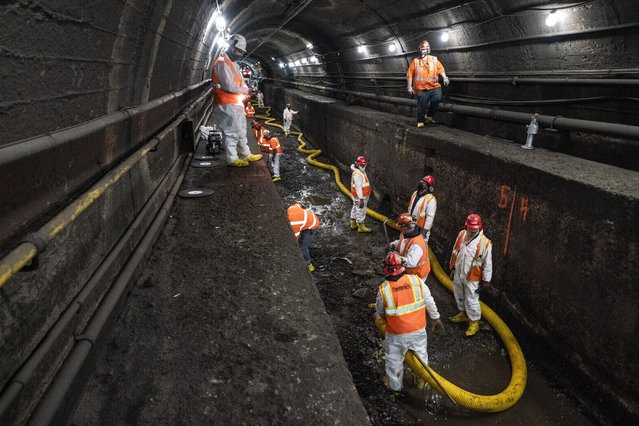 Amtrak workers perform tunnel repairs to a partially flooded train track bed, Saturday, March 20, 2021, in Weehawken, N.J. With a new rail tunnel into New York years away at best, Amtrak is embarking on an aggressive and expensive program to fix a 110-year-old tunnel in the interim. (Photo by John Minchillo/AP Photo) 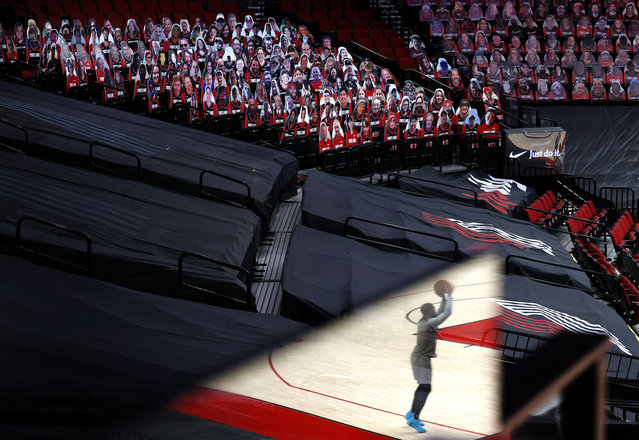 Seen in a plexiglass reflection, Damian Lillard #0 of the Portland Trail Blazers warms up in front of cardboard cutouts of fans before the game against the Brooklyn Nets at Moda Center on March 23, 2021 in Portland, Oregon. (Photo by Steph Chambers/Getty Images) 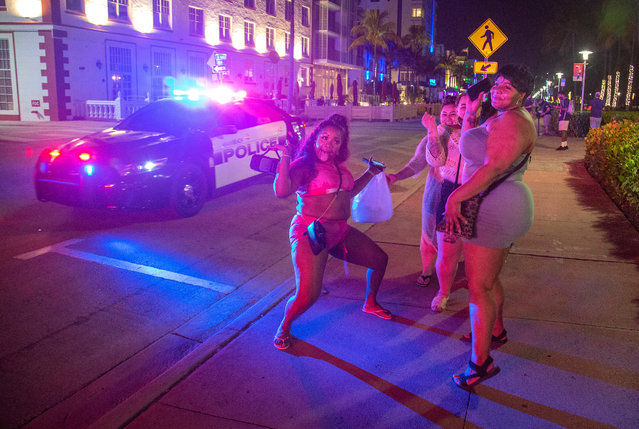 People react as Miami Beach Police Department officers enforce the South beach 8pm curfew during spring break, in Miami Beach, Florida, USA, 25 March 2021. On 20 March the city of Miami Beach imposed a curfew for its entertainment district and closed the three causeways heading into the beach. The measures are being put into place as an effort to control large crowds that have gathered during spring break. (Photo by Cristobal Herrera-Ulashkevich/EPA/EFE) 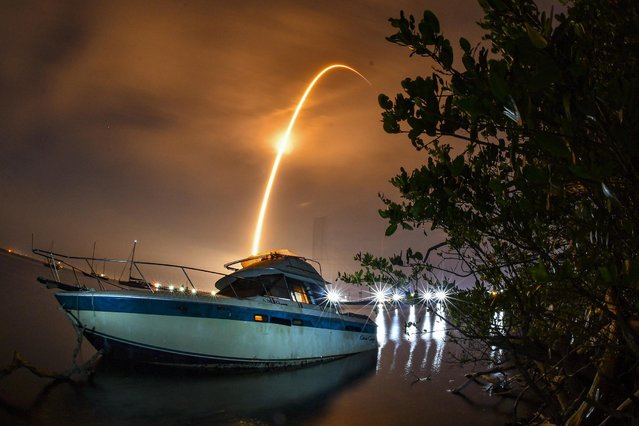 A long exposure shows a streak across the sky above an abandoned boat from the launch of a Falcon 9 rocket and 60 Starlink satellites from Launch Complex 40 at Cape Canaveral Space Force Station, early Wednesday, March 24, 2021, at Port Canaveral in Florida. The 4:28 a.m. launch Wednesday morning lit the skies of the Space Coast with the booster landing on the drone ship Of Course I still Love You. Two and a half minute time exposure of the launch. (Photo by Malcolm Denemark/Florida Today via AP Photo)
Edit Del
29 Mar 2021 09:16:00, post received 0 comments
Publication archive:
←   →
Popular tags:
All tags
Last searches: