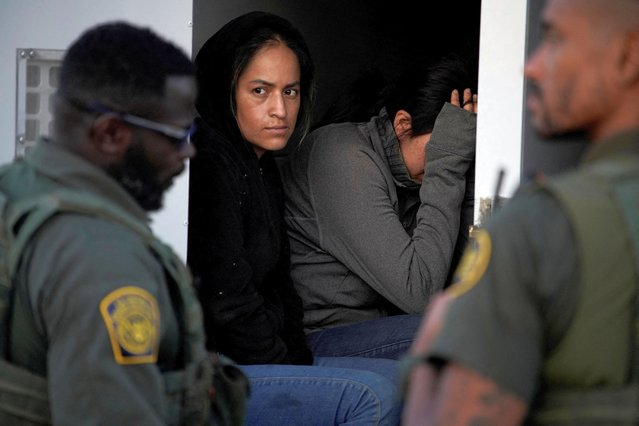 Women wait inside a transport vehicle after being apprehended crossing the U.S.-Mexico border at Mt. Cristo Rey at dawn, as U.S. authorities, blocked by a federal judge from lifting COVID-19 restrictions that empower agents at the U.S.-Mexico border to turn back migrants, continue to enforce the Title 42 rules which result in the fast expulsion of migrants to Mexico or other countries, in Sunland Park, New Mexico, U.S. May 23, 2022. (Photo by Paul Ratje/Reuters) 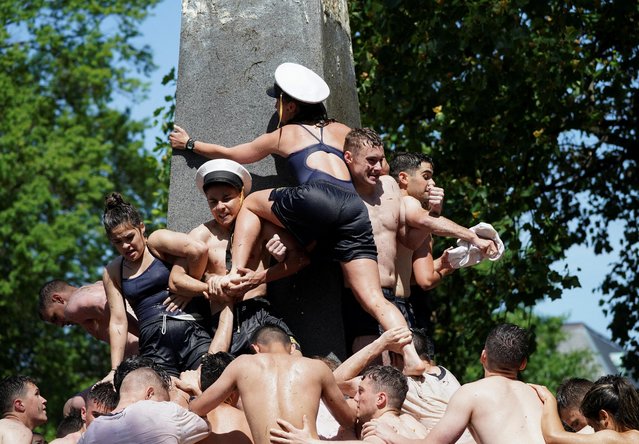 Plebes form a human pyramid to place an upperclassman hat atop the 21-foot vegetable shortening-covered Herndon Monument, a tradition marking the end of their plebe year at the U.S. Naval Academy in Annapolis, Maryland, U.S., May 23, 2022. (Photo by Kevin Lamarque/Reuters) 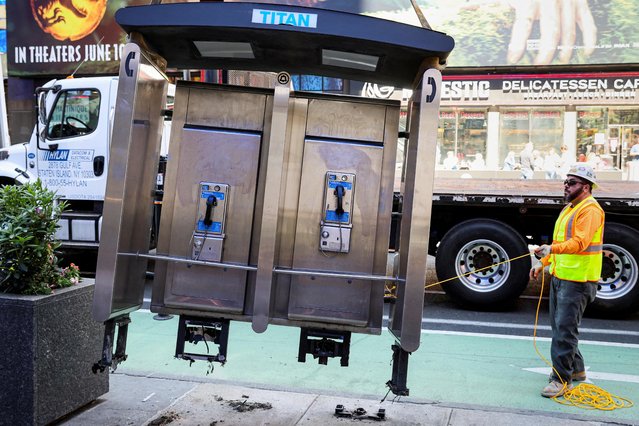 A worker removes the last public payphone near Times Square in New York City, U.S., May 23, 2022. (Photo by Brendan McDermid/Reuters) 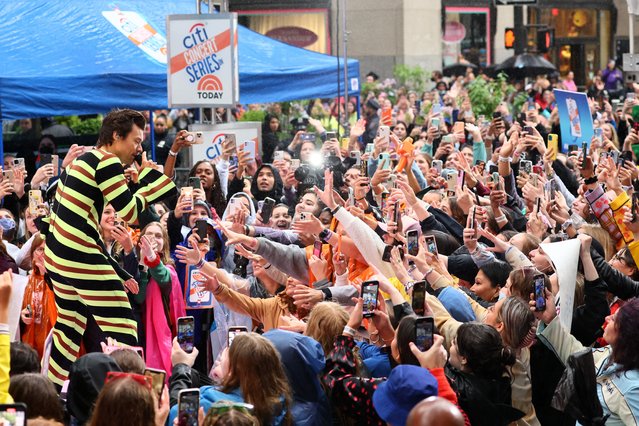 Harry Styles performs on NBC's “Today” at Rockefeller Plaza on May 19, 2022 in New York City. (Photo by Dia Dipasupil/Getty Images) 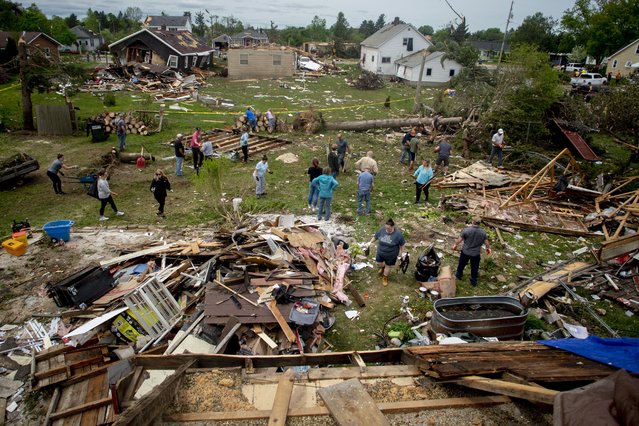 More than two dozen community members pull together to clean up the devastating aftermath at the home of Steve and Theresa Haskes in Gaylord, Mich., on Saturday, May 21, 2022, after an EF3 tornado ripped through the small northern Michigan city. (Photo by Jake May/The Flint Journal via AP Photo) 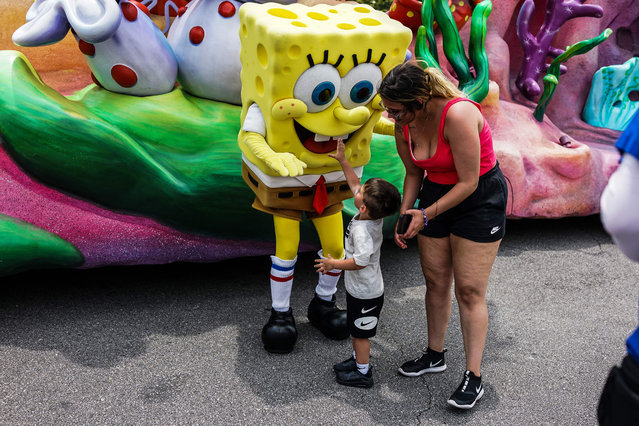 A boy meets a mascot of SpongeBob during the “Superstar Parade” at Universal Studios Florida in Orlando, Florida on May 19, 2022. “Universal’s Superstar Parade will end its run on June 4 to make way for new entertainment experiences”, Universal Orlando said in a statement. (Photo by Chandan Khanna/AFP Photo) 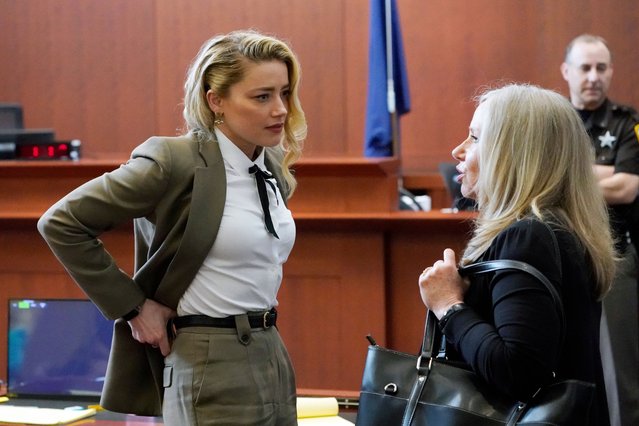 Actor Amber Heard arrives into the courtroom after a break during the Depp v Heard defemation lawsuit at the Fairfax County Circuit Courthouse in Fairfax, Virginia, USA, 23 May 2022. Johnny Depp's 50 million US dollar defamation lawsuit against Amber Heard started on 10 April. (Photo by Steve Helber/EPA/EFE/Pool) 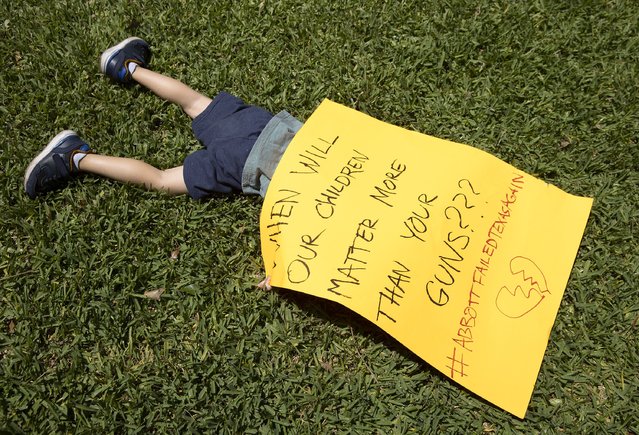 Remy Ragsdale, 3, attends a protest organized by Moms Demand Action on Wednesday May 25, 2022, at the Governor's Mansion in Austin, Texas, after a mass shooting at an elementary school in Uvalde. Photo by (Jay Janner/Austin American-Statesman via AP Photo) 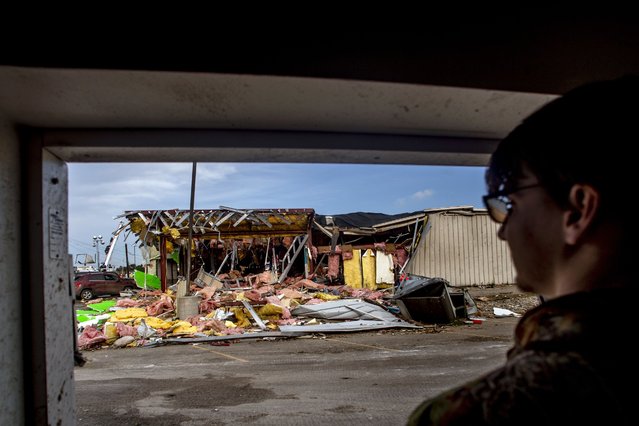 The remains of the Goodwill building seen through the shattered drive-through window at Little Caesars after a tornado ripped through in Gaylord, Michigan on May 21, 2022. (Photo by Jake May/AP Photo) 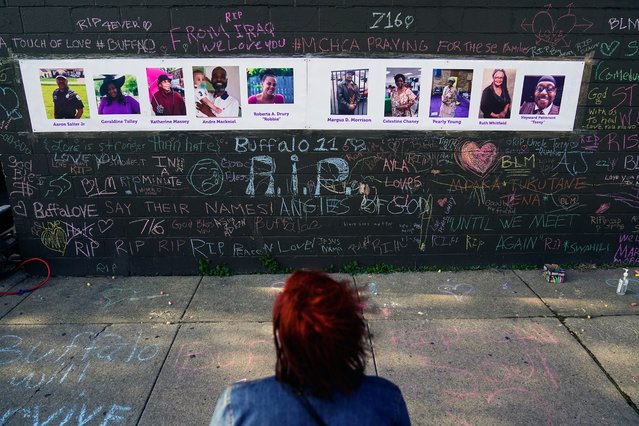 A person visits a makeshift memorial near the scene of Saturday's shooting at a supermarket, in Buffalo, Thursday, May 19, 2022. (Photo by Matt Rourke/AP Photo) 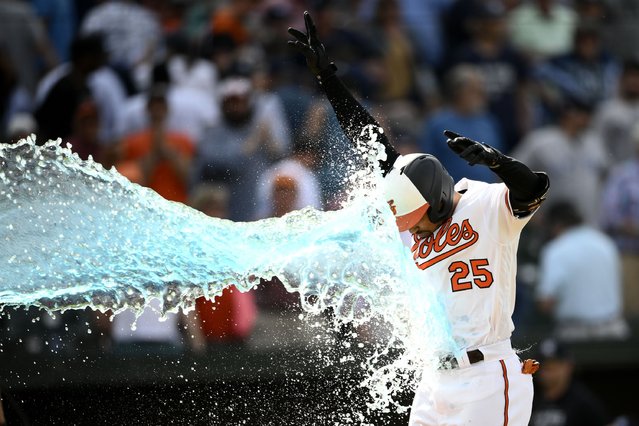 Baltimore Orioles’ Anthony Santander celebrates as he heads home on his three-run walk off home run during the ninth inning of a baseball game against the New York Yankees, Thursday, May 19, 2022, in Baltimore. The Orioles won 9-6. (Photo by Nick Wass/AP Photo) 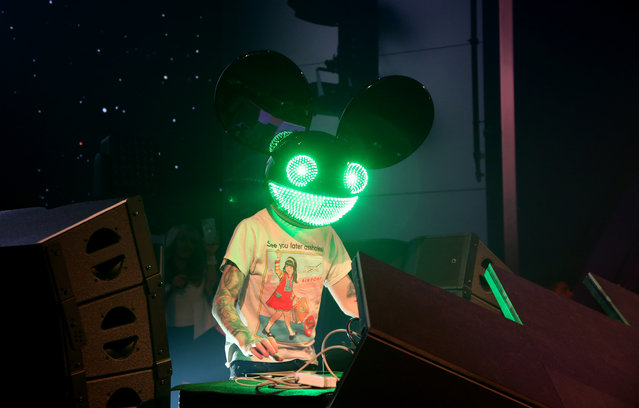 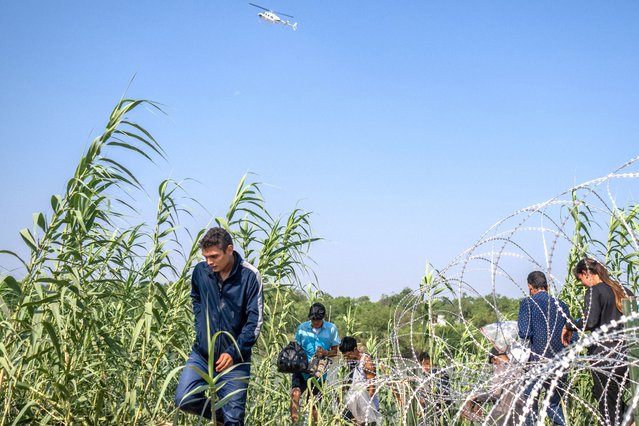 Migrants from El Salvador walk through brush alongside the banks of the Rio Grande after crossing into the U.S. on May 21, 2022 in Eagle Pass, Texas. Title 42, the controversial pandemic-era border policy enacted by former President Trump, which cites COVID-19 as the reason to rapidly expel asylum seekers at the U.S. border, was set to officially expire on May 23rd. A federal judge in Louisiana delivered a ruling today blocking the Biden administration from lifting Title 42. (Photo by Brandon Bell/Getty Images) 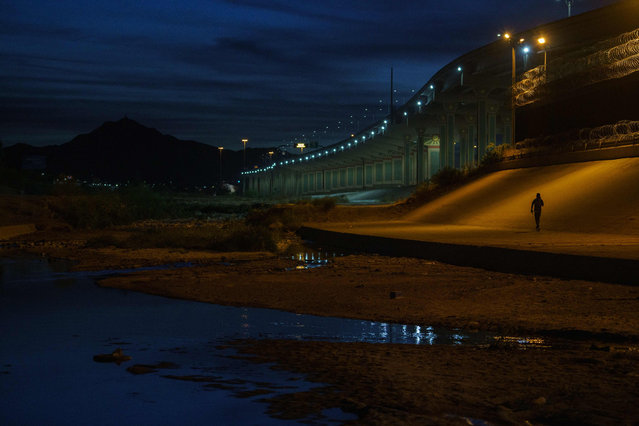 A man walks along the border wall after crossing the US-Mexico border to El Paso, Texas, as seen from Ciudad Juarez, Chihuahua state, Mexico on May 19, 2022. The rule called Title 42 that allows authorities to remove anyone simply because they might be carrying the disease. President Joe Biden's administration announced it would rescind Title 42 on May 23, 2022 but opposition from Republican-dominated states has tied the issue up in legal knots. A judge is expected to rule on its fate this weekend. (Photo by Paul Ratje/AFP Photo) 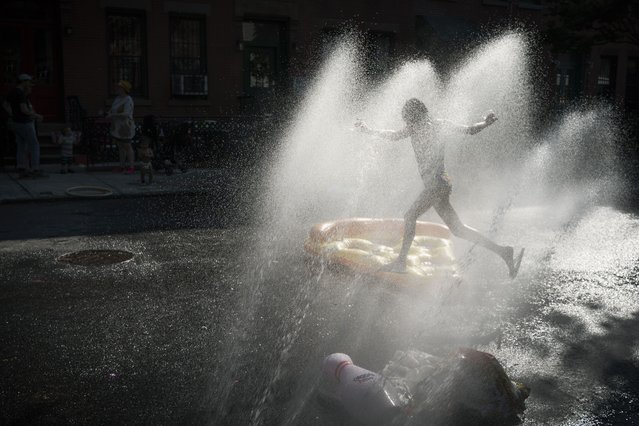 A child cools off in the spray of water from a fire hydrant during a block party in the Brooklyn borough of New York on Saturday, May 21, 2022, where New Yorkers experienced summer-like weather and temperatures are expected to peak at nearly 90 degrees (Fahrenheit) over the weekend, roughly ten degrees hotter than average for New York City in late May, according to meteorologists. (Photo by Wong Maye-E/AP Photo) 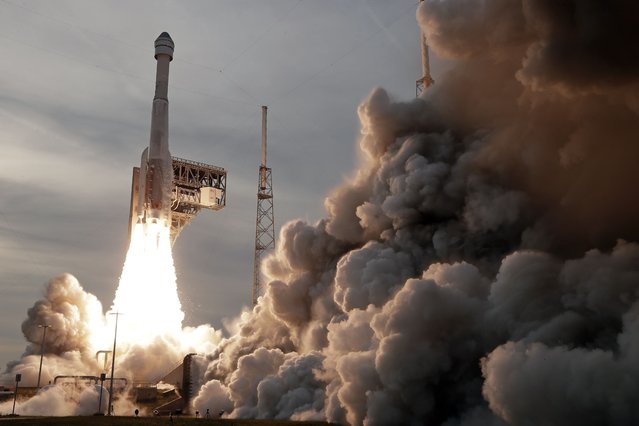 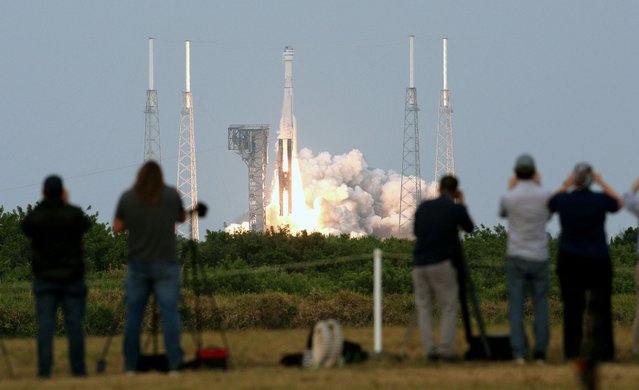 An Atlas V rocket of United Launch Alliance lifts off from launch pad SLC-41 to begin the Orbital Flight Test 2, or OFT-2 mission, at Cape Canaveral, Florida on May 19, 2022. Sitting atop the rocket is the Boeing CST-100 Starliner spacecraft, which will eventually transport astronauts to and from the International Space Station. The test flight was delayed from rom December of 2019 by software problems which led to stuck isolation valves on the capsule. The launch will gather data aimed at a crewed test flight later this year as well as carry more than 500 pounds (227 kg) of food and other supplies to the International Space Station. (Photo by Gregg Newton/AFP Photo) 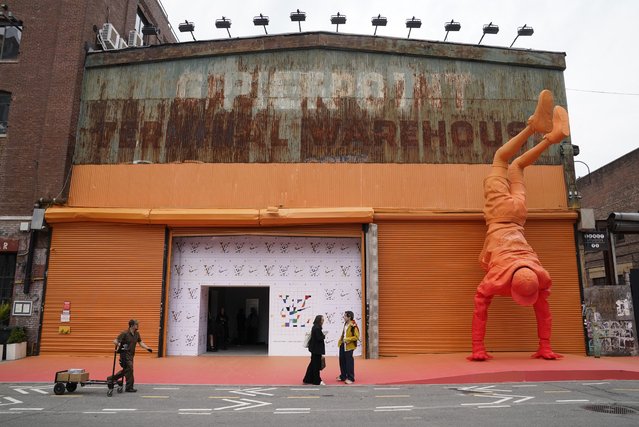 A sculpture of the late Virgil Abloh, the founder of Off-White and the Men's Artistic Director of Louis Vuitton, during a immersive exhibition showcasing 47 limited editions of the Nike “Air Force 1” sneaker created by Virgil Abloh in partnership with Nike for Louis Vuitton May 20, 2022 at the Greenpoint Terminal Warehouse in Brooklyn, New York. Some of Virgil Abloh's final creations will be on public display in New York in an expo that also confers further mystique to the lucrative world of specialty sneakers.Opening Saturday and running through the end of May, the show will present 47 customized Nike “Air Force 1” sneakers designed by Abloh and assembled at Louis Vuitton's manufacturing facility in Venice. (Photo by Timothy A. Clary/AFP Photo) 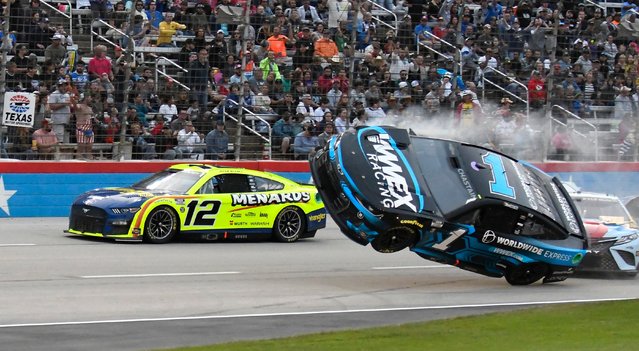 Ryan Blaney (12) passes by Ross Chastain (1) lifting off the track after making contact with Kyle Busch, right, during the NASCAR All-Star auto race at Texas Motor Speedway in Fort Worth, Texas, Sunday, May 22, 2022. (Photo by Randy Holt/AP Photo) 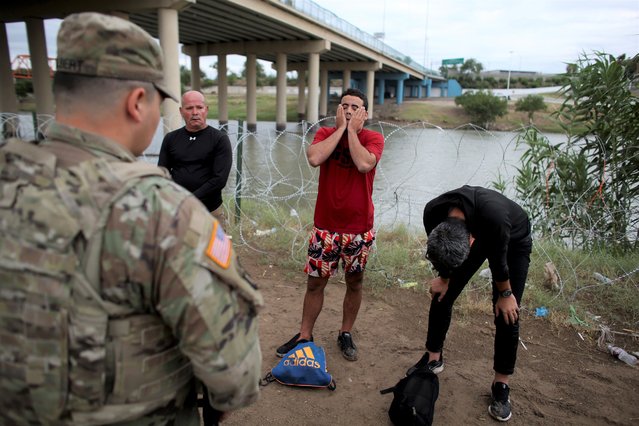 Three migrants from Cuba stand in front of a National Guardsman after crossing the Rio Grande river in Eagle Pass, Texas, Sunday May 22, 2022. Little has changed in what has quickly become one of the busiest corridors for illegal border crossings since a federal judge blocked pandemic-related limits on seeking asylum from ending Monday. (Photo by Dario Lopez-Mills/AP Photo)
Edit Del
30 May 2022 04:19:00, post received 0 comments
Publication archive:
←   →
Popular tags:
All tags
Last searches: