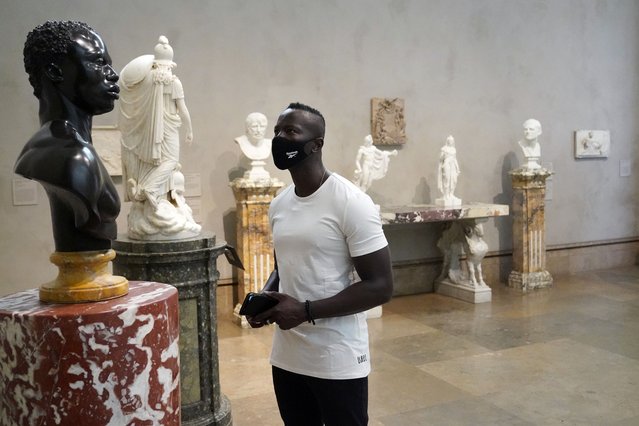 Timothy Musomba wears a mask while viewing sculptures at the newly re-opened Getty Center amid the COVID-19 pandemi,c Wednesday, May 26, 2021, in Los Angeles. (Photo by Marcio Jose Sanchez/AP Photo) 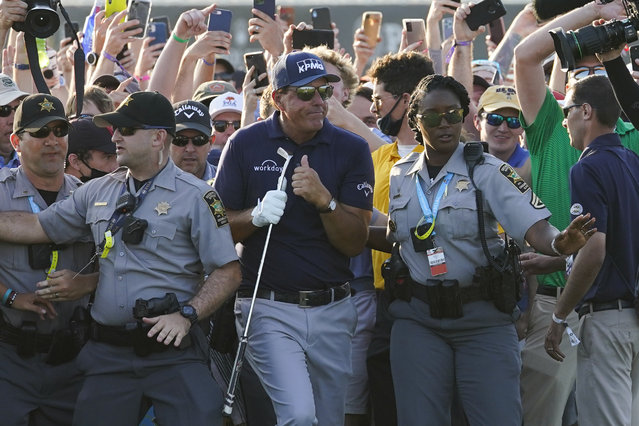 Phil Mickelson makes his way through fans on the 18th fairway during the final round at the PGA Championship golf tournament on the Ocean Course, Sunday, May 23, 2021, in Kiawah Island, S.C. (Photo by Matt York/AP Photo) 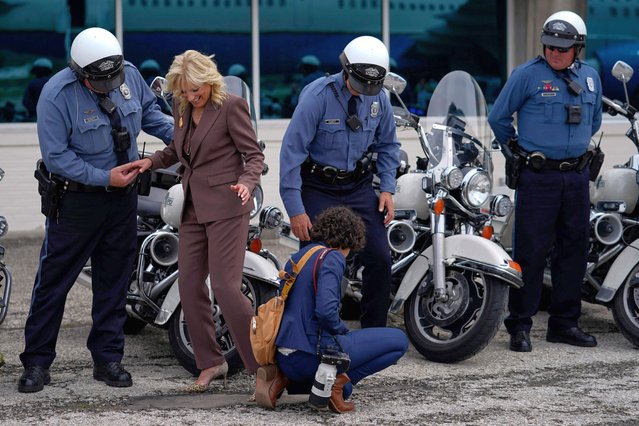 US First lady Jill Biden is helped after getting the heal of her shoe stuck in the pavement while being photographed with members of her motorcade escort before boarding her plane at Charles B. Wheeler Downtown Airport in Kansas City, Missouri on May 27, 2021, en route to Washington, DC. (Photo by Carolyn Kaster/Pool via AFP Photo) 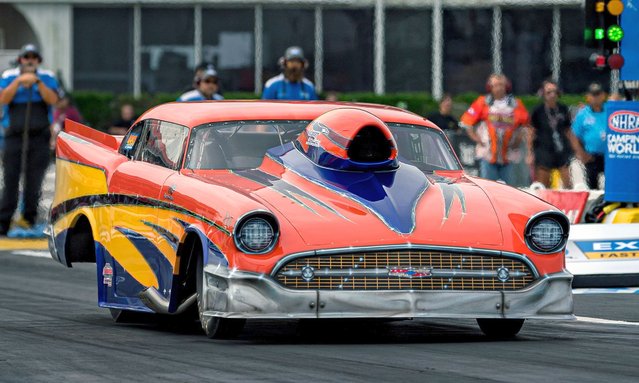 Top Sportsman Rickey Fischer competes during the qualifying round at the NHRA SpringNationals on Saturday, May 22, 2021, at the Houston Raceway in Baytown, Texas. (Photo by Lynn Pennington/ZUMA Wire/Rex Features/Shutterstock) 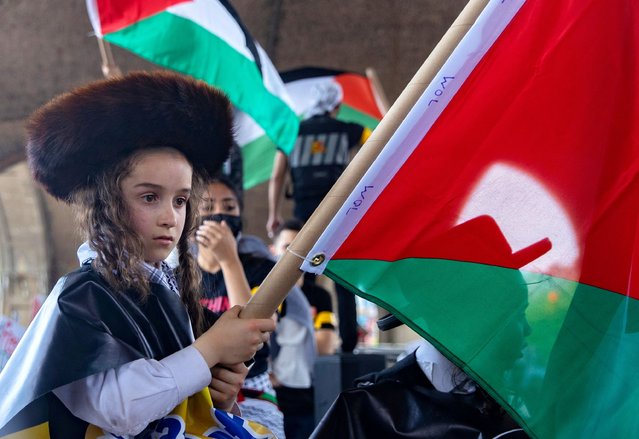 A Jewish boy holding a Palestine flag takes part in a protest in support of Palestinians following a flare-up of Israeli-Palestinian violence, in the Queens borough of New York City, New York, U.S., May 22, 2021. (Photo by Jeenah Moon/Reuters) 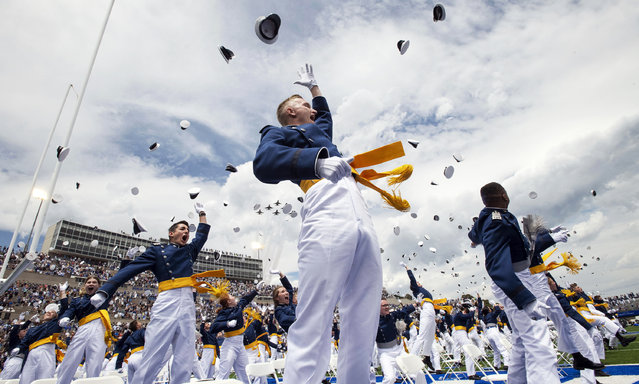 The Air Force Thunderbirds flyover during the celebratory hat toss during the United States Air Force Academy's Class of 2021 graduation ceremony at the USAFA in Colorado Springs, Colo., on Wednesday, May 26, 2021. More than 1,000 cadets celebrated becoming officers. (Photo by Chancey Bush/The Gazette via AP Photo) 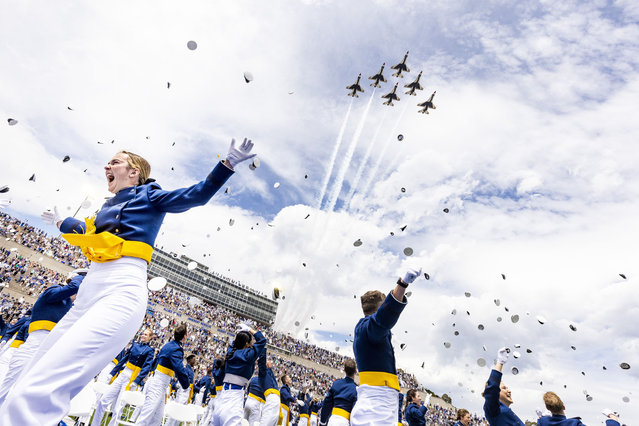 United States Air Force Academy graduates cheer as the United States Air Force Thunderbirds fly over the graduation for the Class of 2021 at Falcon Stadium on May 26, 2021 in Colorado Springs, Colorado. Chairman of the Joint Chiefs of Staff General Mark A. Milley gave the commencement address to the 1,019 graduates from the academy. (Photo by Michael Ciaglo/Getty Images) 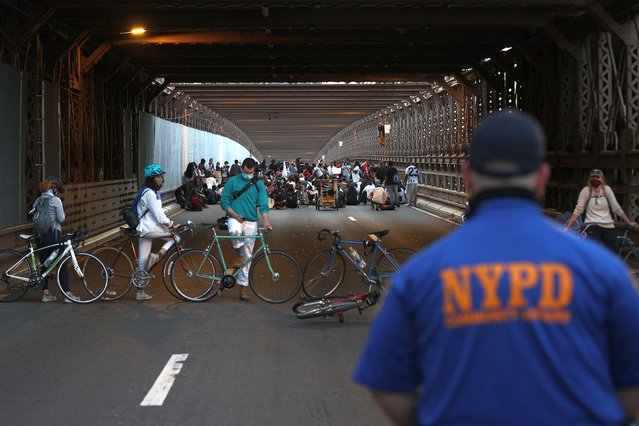 BLM protesters sat for 9 minutes 29 seconds as thecrossed from the Brooklyn Bridge to Manhattan for the one-year anniversary of George Floyd's death in New York City, United States on May 25, 2021. (Photo by Tayfun Coskun/Anadolu Agency via Getty Images) 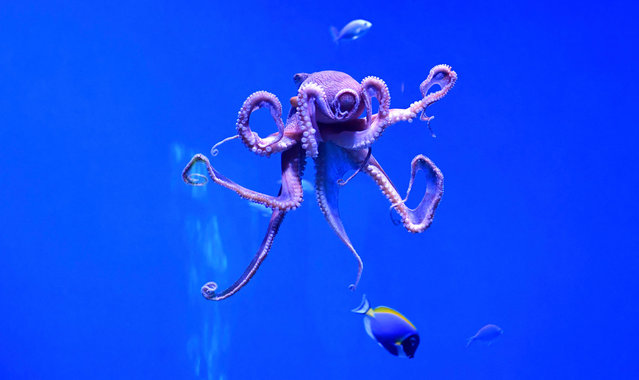 A day octopus, also known as the big blue octopus, found in both the Pacific and Indian Oceans, is seen at the Aquarium of the Pacific in Long Beach, California on May 27, 2021, during a media preview of the indoor exhibition “Coral Reefs: Nature's Underwater Cities”. “Coral Reefs: Nature's Underwater Cities” opens to the public on May 28, 2021 through April 2022, spotlighting the importance of coral reefs to the planet and marine environment. (Photo by Frederic J. Brown/AFP Photo) 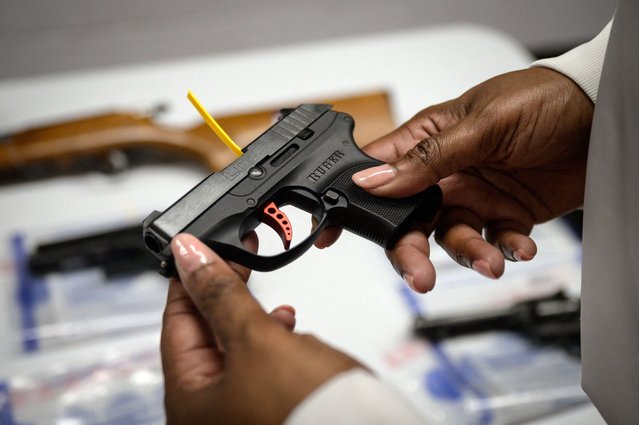 A Ruger pistol, or handgun, is displayed during a gun “buyback” event held by the New York Police Department (NYPD) and the office of the Attorney General, in the New York borough of Brooklyn on May 22, 2021. The “no questions asked” buyback event offers a chance for gun owners to trade in firearms for gift cards and iPads, as part of ongoing efforts by the NYPD to tackle gun crime. (Photo by Ed Jones/AFP Photo) 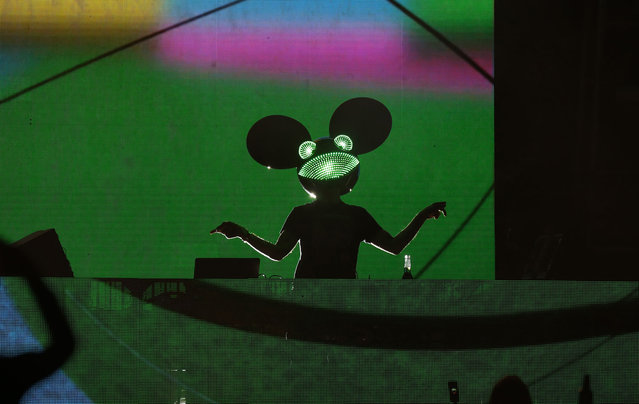 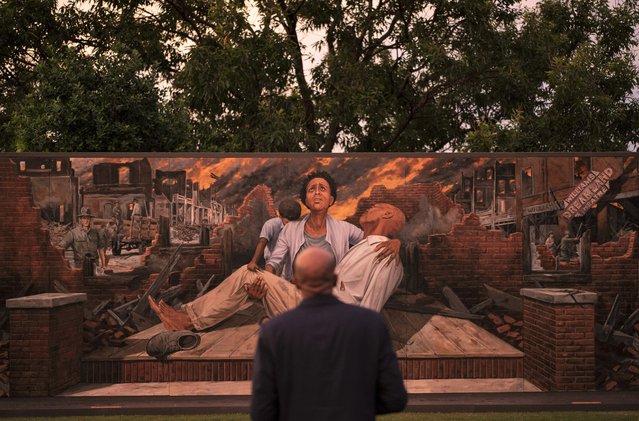 In this Thursday, May 27, 2021 file photo, Darius Kirk looks at a mural depicting the Tulsa Race Massacre in the historic Greenwood neighborhood ahead of centennial commemorations of the massacre in Tulsa, Okla. The horror and violence visited upon Tulsa‚Äôs Black community in 1921 didn't become part of the American story. Instead, it was pushed down, unremembered and untaught until efforts decades later started bringing it into the light. (Photo by John Locher/AP Photo/File) 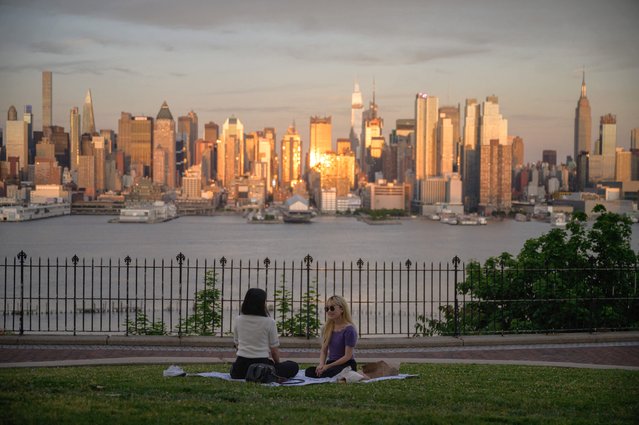 A general view shows people sitting before the Manhattan city skyline at a park in New Jersey, on May 27, 2021. (Photo by Ed Jones/AFP Photo) 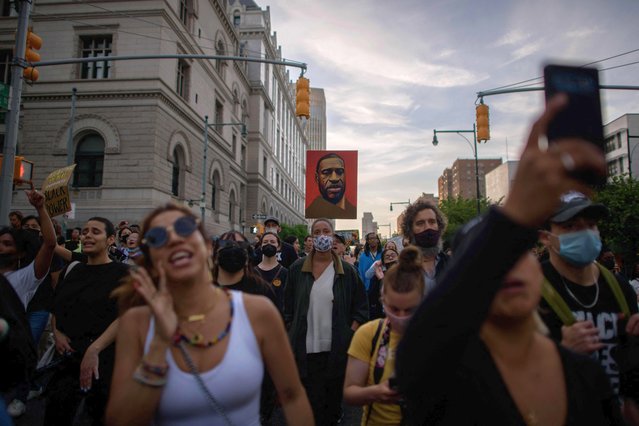 Black Lives Matter (BLM) protesters hold placards and shout slogans during a march on the anniversary of the death of George Floyd, in Brooklyn, New York on May 25, 2021. The family of George Floyd appealed on May 25 for sweeping police reform on the anniversary of the African American man's murder by a white officer, as they met President Joe Biden at the White House. (Photo by Ed Jones/AFP Photo) 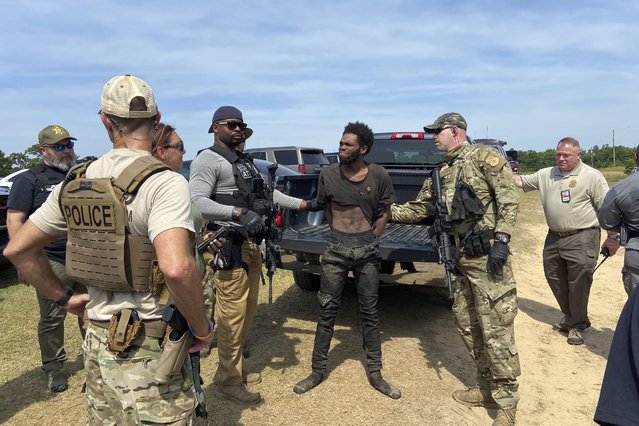 In this photo provided by the Chester County Sheriff's Office, Tyler Terry is arrested in South Carolina on Monday, May 24, 2021. A weeklong manhunt for Terry, a suspect wanted in the killings of four people, ended without another shot fired as hundreds of officers surrounded him, authorities said. (Photo by Chester County Sheriff's Office via AP Photo) 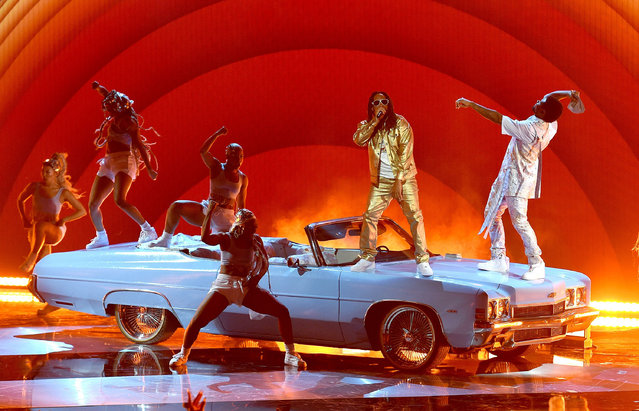 Usher and Lil Jon perform during the iHeartRadio music awards show at the Dolby Theatre in Los Angeles, US on May 27, 2021. (Photo by Frank Micelotta/FOX/Picturegroup/Rex Features/Shutterstock) 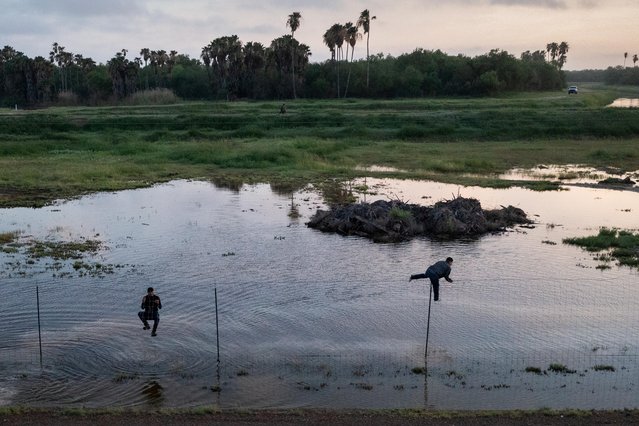 Migrants from Central America jump a fence as they run south towards Mexico while being chased by a U.S. border patrol agent after crossing the Rio Grande river into the United States from Mexico in La Joya, Texas, U.S., May 23, 2021. (Photo by Adrees Latif/Reuters) 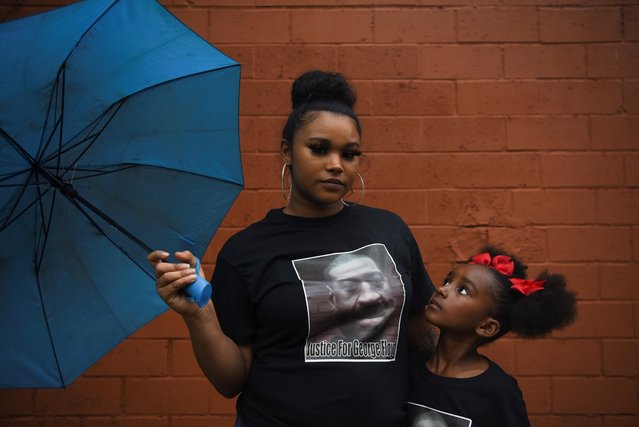 Mother and daughter Brittany and Brooklyn Elmore pose for a portrait in front of a mural of George Floyd ahead of the anniversary of Floyd’s death in Houston, Texas, U.S., May 23, 2021. (Photo by Callaghan O'Hare/Reuters) 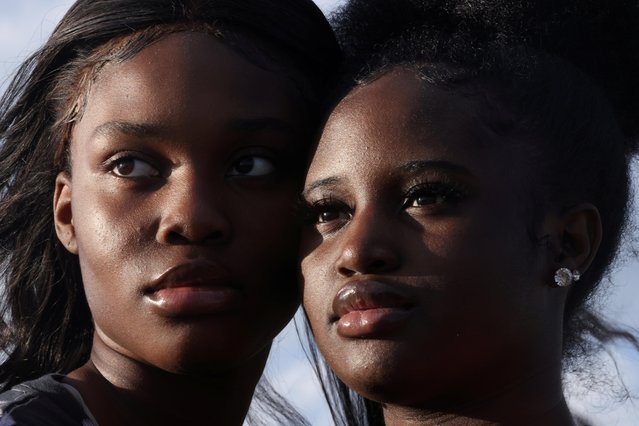 Bethel Boateng and her sister Natalie Boateng pose for a portrait along Pena Boulevard nearly a year after they and other youth led a march onto the highway in protest of the killing of George Floyd in Denver, Colorado, U.S., May 20, 2021. (Photo by Kevin Mohatt/Reuters) 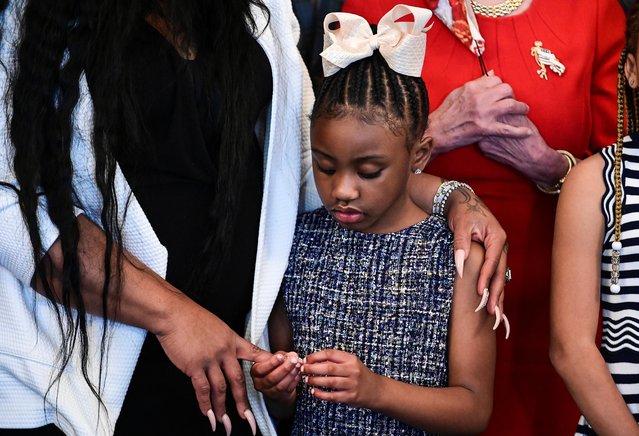 Gianna Floyd, George Floyd's daughter, holds the hand of her mother, Roxie Washington, while standing with members of the Floyd family prior to a meeting to commemorate the death of George Floyd with U.S. House Speaker Nancy Pelosi (D-CA) at the U.S. Capitol in Washington, U.S., May 25, 2021. (Photo by Erin Scott/Pool via Reuters) 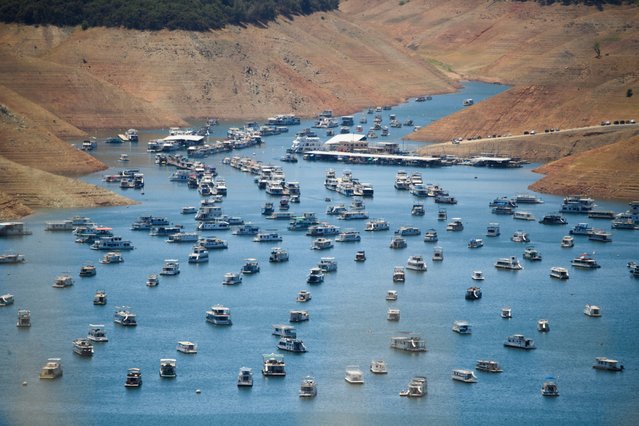 Houseboats are moored on Lake Oroville reservoir during the California drought emergency on May 25, 2021 in Oroville, California. Summer has not even begun and Lake Oroville, the second-largest reservoir in California that provides drinking water to more than 25 million people, is at less than half of its average capacity at this time of year It is a worrying indication of the worsening drought conditions in the northern part of the Golden State. (Photo by Patrick T. Fallon/AFP Photo)
Edit Del
31 May 2021 08:49:00, post received 0 comments
Publication archive:
←   →
Popular tags:
All tags
Last searches: