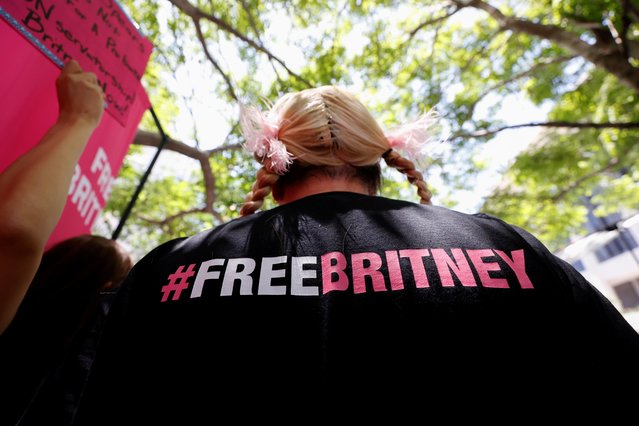 A person protests in support of pop star Britney Spears on the day of a conservatorship case hearing at Stanley Mosk Courthouse in Los Angeles, California, U.S. June 23, 2021. (Photo by Mario Anzuoni/Reuters) 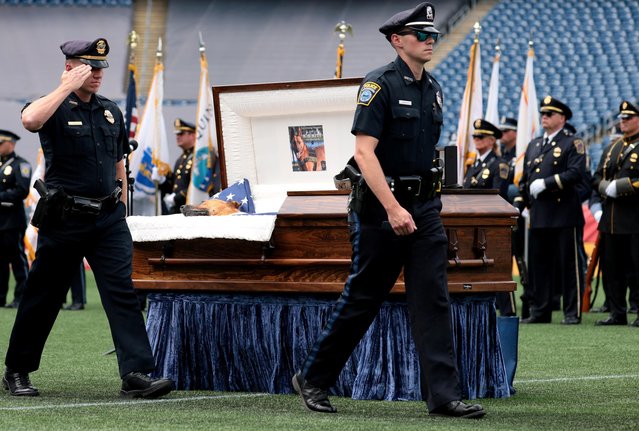 Police officers salute the casket of K-9 Kitt in Gillette Stadium during a memorial service held in honor of the police dog, who was killed during a domestic violence call, in Boston, Massachusetts, U.S. June 22, 2021. (Photo by Jessica Rinaldi/Pool via Reuters) 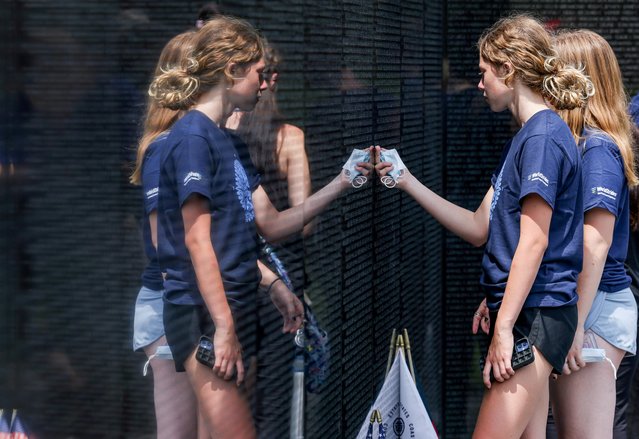 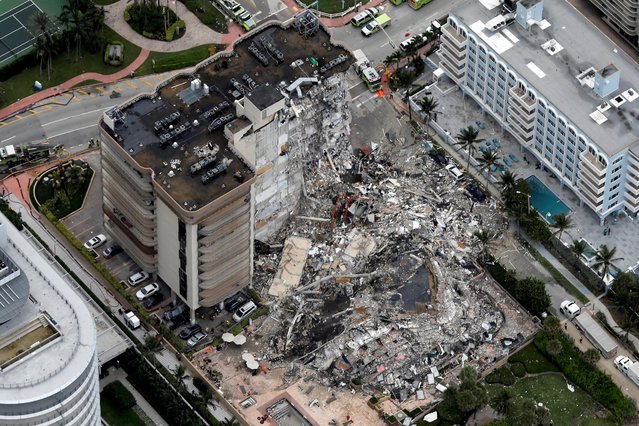 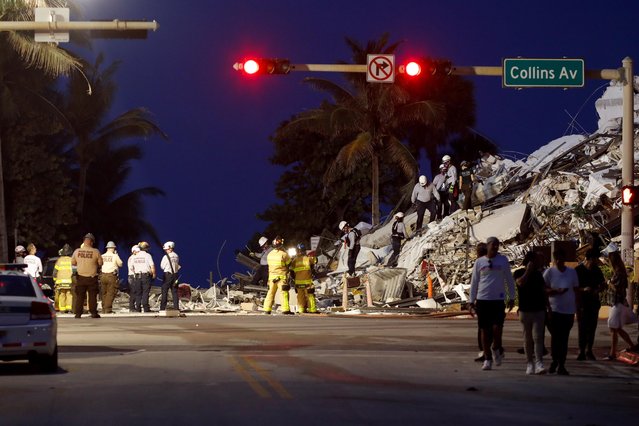 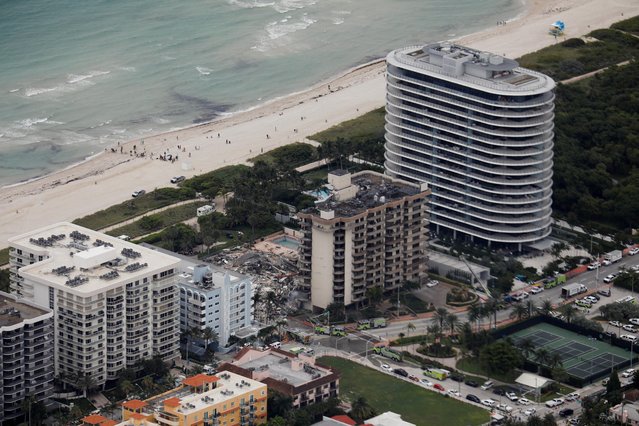 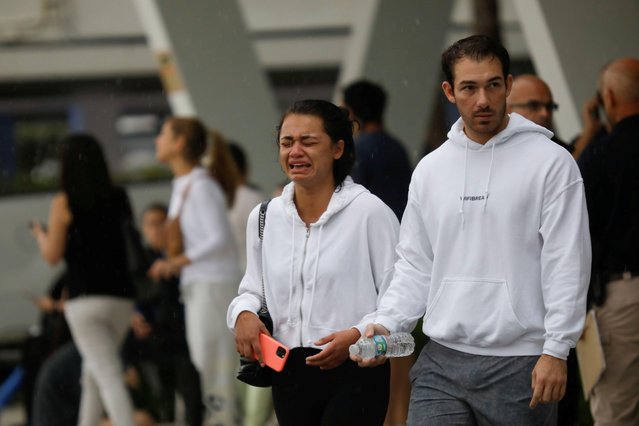 A woman weeps at the Surfside Community Center where authorities are taking residents and relatives from a partially collapsed building in Surfside near Miami Beach, Florida, U.S., June 24, 2021. (Photo by Marco Bello/Reuters) 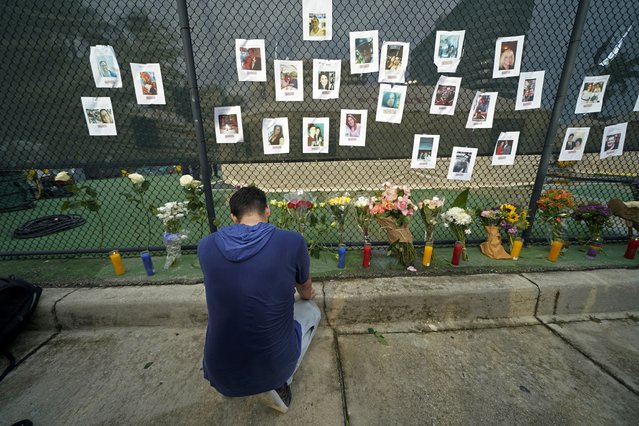 Leo Soto, who created this memorial with grocery stores donating flowers and candles, pauses in front of photos of some of the missing people that he put on a fence, near the site of an oceanfront condo building that partially collapsed in Surfside, Fla., Friday, June 25, 2021. (Photo by Gerald Herbert/AP Photo) 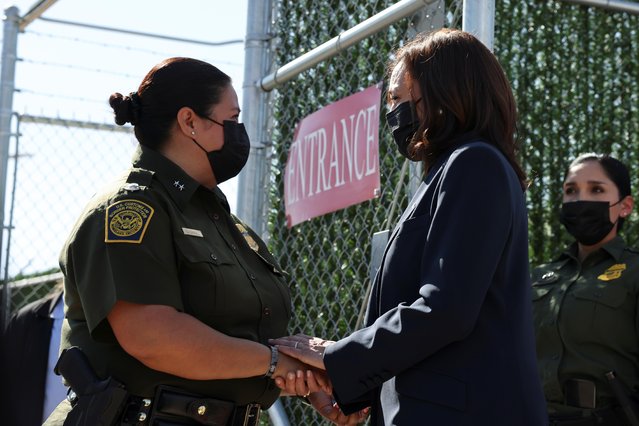 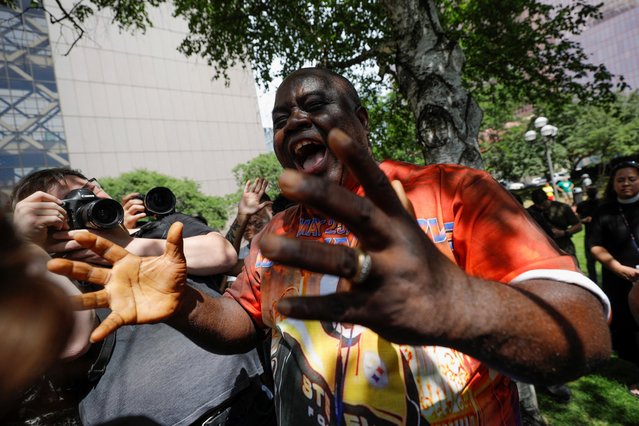 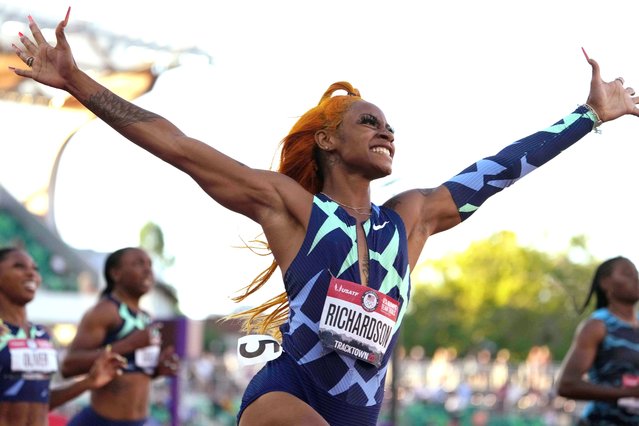 Sha'Carri Richardson celebrates after winning the women's 100-meter finals in 10.87 during the U.S. Olympic Team Trials at Hayward Field in Eugene, Oregon, June 19, 2021. Billed as American athletics' next star, the 5-foot, 1-inch dynamo didn't disappoint, torching the race with her trademark flourish at the U.S. Olympic trials, raising her arms to the sky and letting out a cheer in front of an elated crowd as she booked her ticket to Tokyo. “I'm highly blessed and grateful”, said Richardson, who told a television reporter that she learned last week that her biological mother had passed away. “Nobody but them and my coach know what I go through on a day-to-day basis”, pointing to her family, moments after she had embraced her grandmother in the stands. (Photo by Kirby Lee/USA TODAY Sports via Reuters) 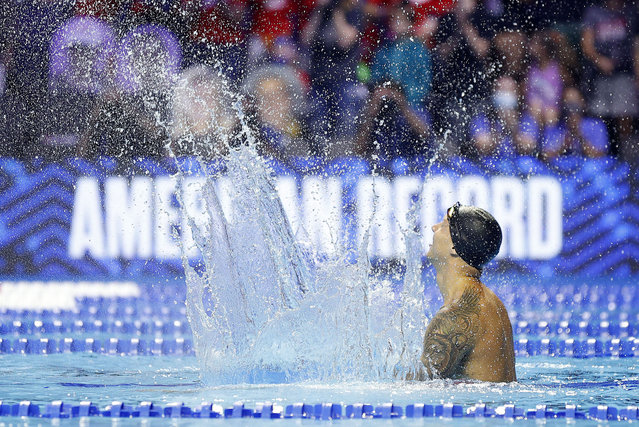 Caeleb Dressel of the United States reacts after setting an American Record in the Men's 50m freestyle final during Day Eight of the 2021 U.S. Olympic Team Swimming Trials at CHI Health Center on June 20, 2021 in Omaha, Nebraska. (Photo by Maddie Meyer/Getty Images) 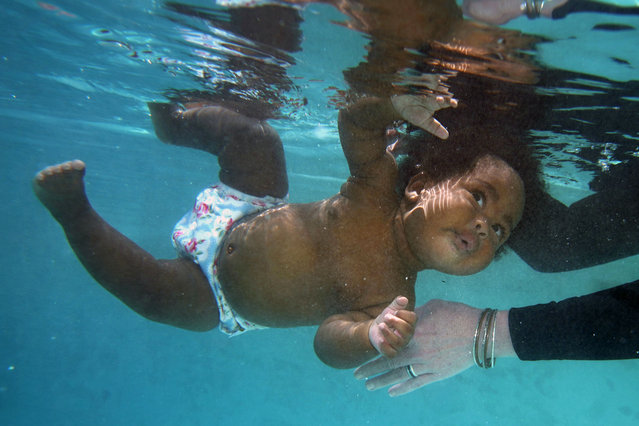 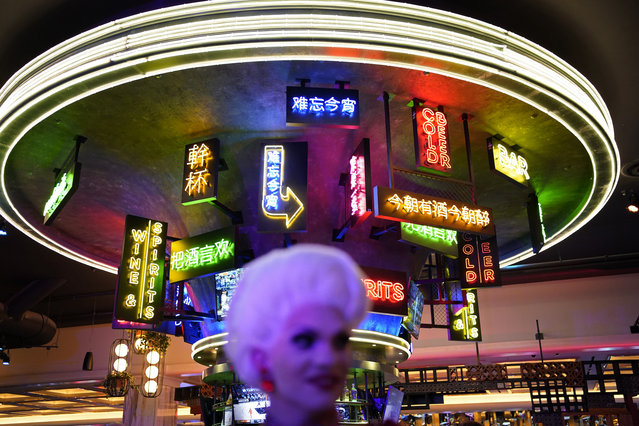 People attend a party during the the opening night of the Resorts World Las Vegas hotel-casino, Thursday, June 24, 2021, in Las Vegas. (Photo by John Locher/AP Photo) 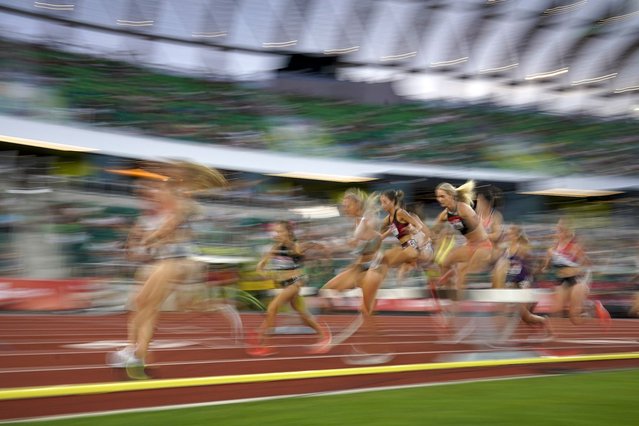 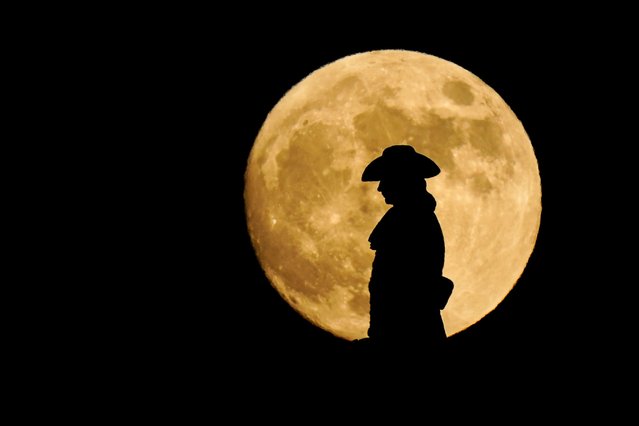 The moon rises in view of a statue of William Penn atop City Hall in Philadelphia, late Wednesday, June 23, 2021. (Photo by Matt Rourke/AP Photo) 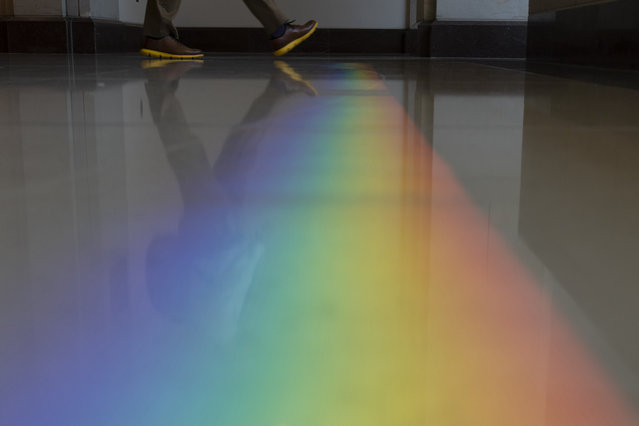 A rainbow is projected on the floor by the sun passing through windows of the Capitol Visitor Center area of the U.S. Capitol in Washington, Wednesday, June 23, 2021. (Photo by Alex Brandon/AP Photo) 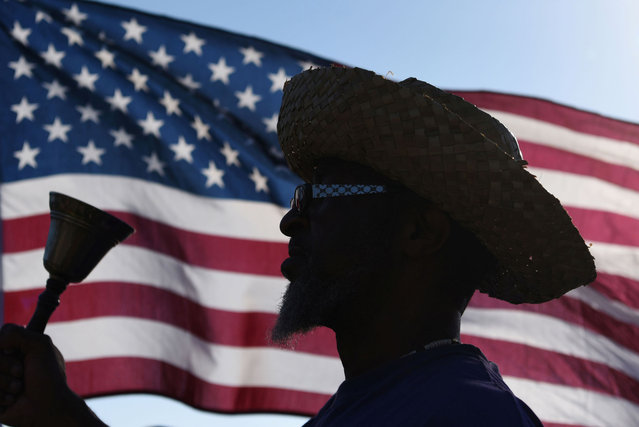 Brock Harrell, of Galveston, rings a bell during a reenactment to celebrate Juneteenth, which commemorates the end of slavery in Texas, two years after the 1863 Emancipation Proclamation freed slaves elsewhere in the United States, in Galveston, Texas, June 19, 2021. (Photo by Callaghan O'Hare/Reuters) 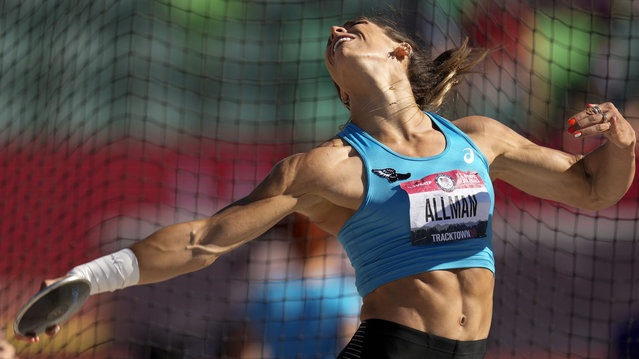 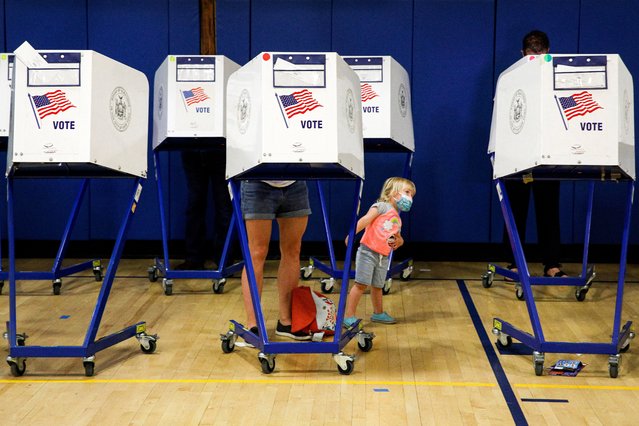 People fill out ballots during voting in the New York mayoral primary election at a polling site in the Brooklyn borough of New York City, New York, U.S., June 22, 2021. (Photo by Brendan McDermid/Reuters) 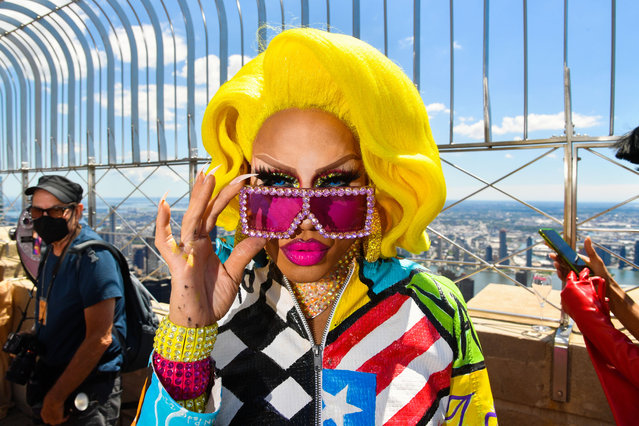