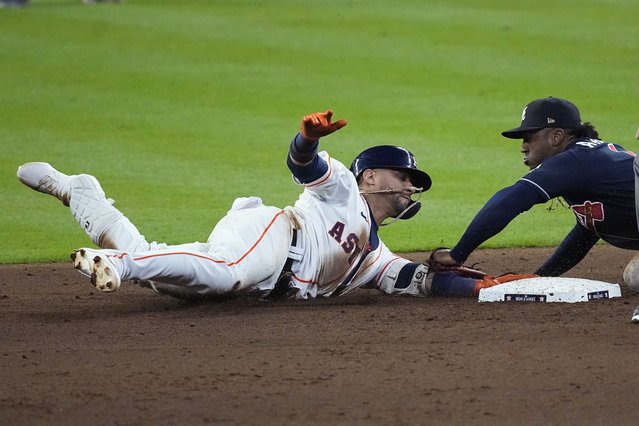 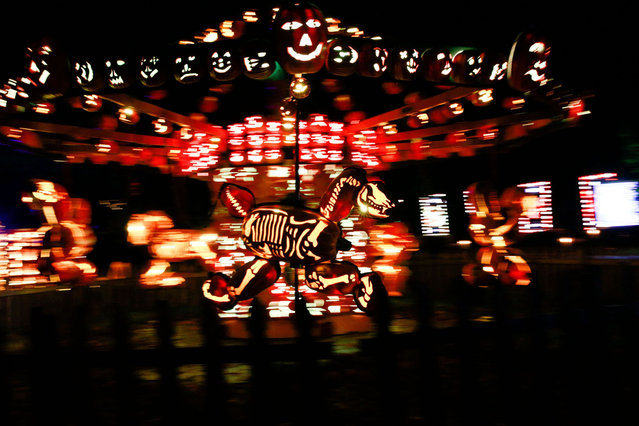 A Carrousel made of pumpkins is illuminated during “The Great Jack OLantern Blaze” at Van Cortlandt Manor on October 27, 2021 in Croton-on-Hudson, New York, ahead of Halloween. (Photo by Kena Betancur/AFP Photo) 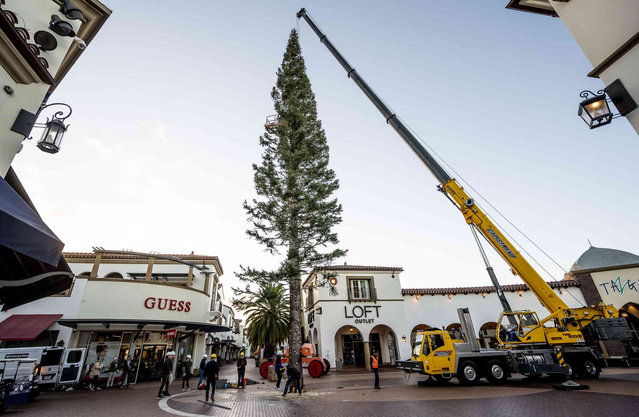 Workers with Victor's Custom Christmas Trees place a 100-foot White fir at the Outlets at San Clemente, Calif., on Tuesday, October 26, 2021. The tree, after making a 670-mile journey from Mt. Shasta, will be hand decorated with 18,000 lights and 10,000 bows. (Photo by Paul Bersebach/The Orange County Register via AP Photo) 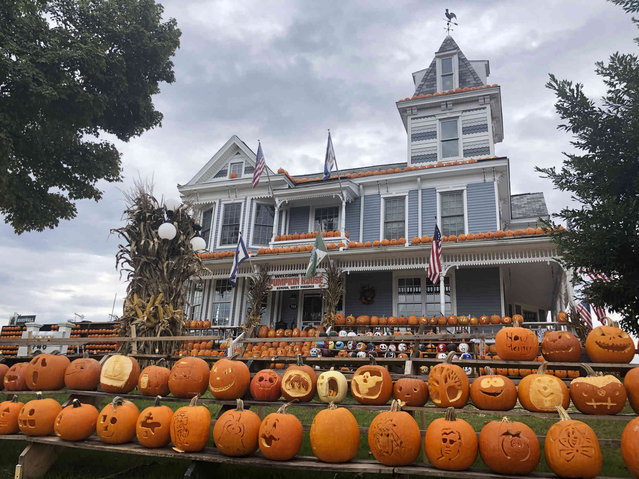 Pumpkins line the Pumpkin House in Kenova, W.Va., Thursday, October 28, 2021. In January, West Virginia was at the forefront of COVID-19 vaccine rollouts with the help of hundreds of mom-and-pop pharmacies. But demand has almost dried up, and West Virginia's vaccination rate is now the lowest in the nation. (Photo by John Raby/AP Photo) 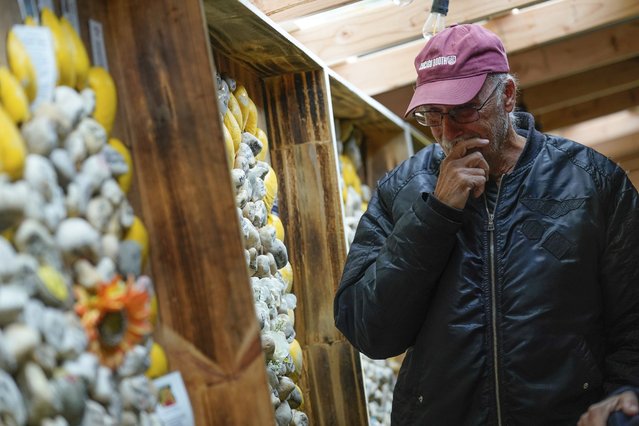 Mike Baronick reacts after seeing the name of his wife, who died from COVID-19, written on a rock during his first visit to the Rami's Heart COVID-19 Memorial in Wall Township, N.J., Wednesday, October 27, 2021. The memorial, which started out on a Jersey shore beach made of shells and rocks, has found a permanent home at Allaire Community Farm. Started by Rima Samman and named after her brother Rami, who was killed by the coronavirus, it has grown to more than 4,000 victims' names, with dozens of new names added every week. (Photo by Seth Wenig/AP Photo) 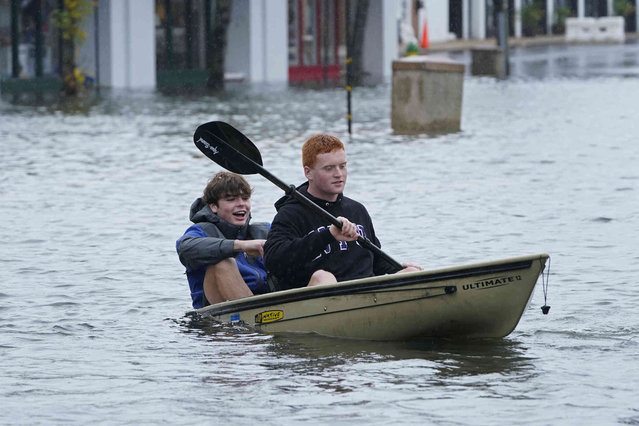 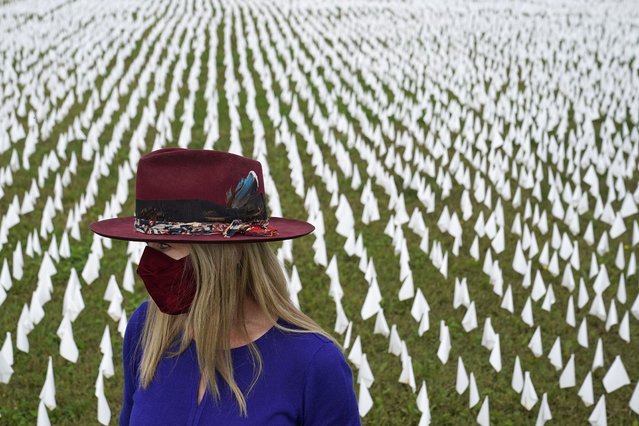 In this October 27, 2020, file photo, Artist Suzanne Brennan Firstenberg stands among thousands of white flags planted in remembrance of Americans who have died of COVID-19, near Robert F. Kennedy Memorial Stadium in Washington. Firstenberg's temporary art installation, called “In America, How Could This Happen”, will include an estimated 240,000 flags when completed. (Photo by Patrick Semansky/AP Photo/File) 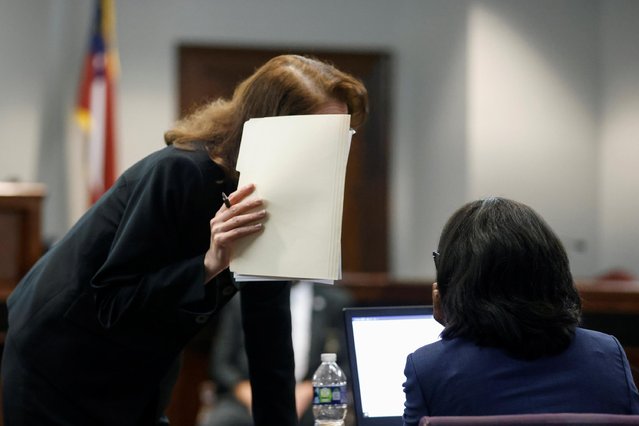 Prosecutors Linda Dunikoski and Larissa Ollivierre interact at the jury selection in the trial of William “Roddie” Bryan, Travis McMichael and Gregory McMichael, charged with the February 2020 death of 25-year-old Ahmaud Arbery, at the Gwynn County Superior Court, in Brunswick, Georgia, U.S. October 27, 2021. (Photo by Octavio Jones/Pool via Reuters) 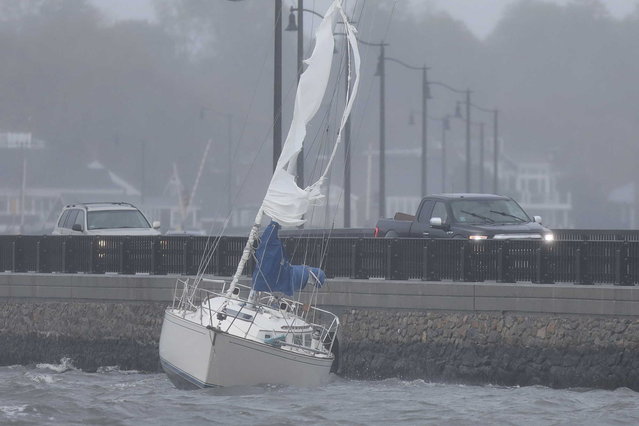 A sail boat runs aground into the Bridge Street causeway in Dartmouth, Mass. on Wednesday, October 27, 2021 as nor'easter storm slams into the region. (Photo by Peter Pereira/The Standard-Times via AP Photo) 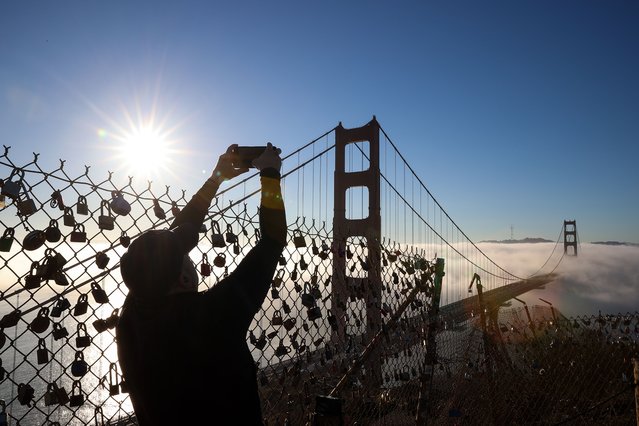 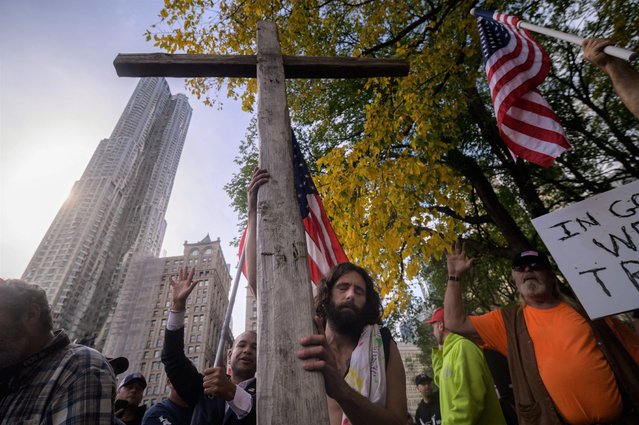 Municipal workers hold placards and shout slogans during a protest against the covid-19 vaccine mandate, in New York on October 25, 2021. Vaccine-reluctant New York firefighters took to the streets October 25, 2021 to demonstrate against the city's requirement that they get inoculated against Covid-19 or risk losing their jobs. (Photo by Ed Jones/AFP Photo) 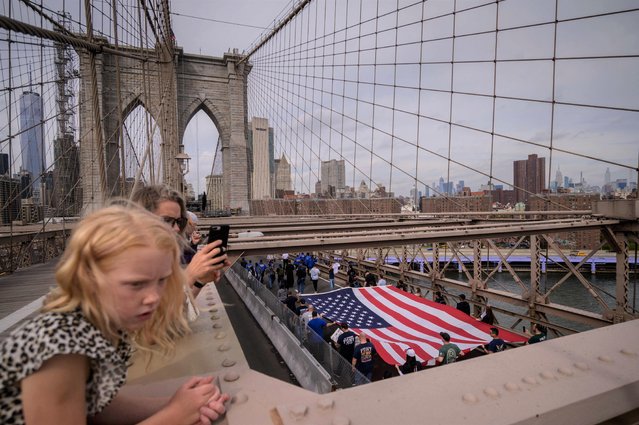 Municipal workers hold placards and shout slogans as they march across Brooklyn bridge during a protest against the covid-19 vaccine mandate, in New York on October 25, 2021. (Photo by Ed Jones/AFP Photo) 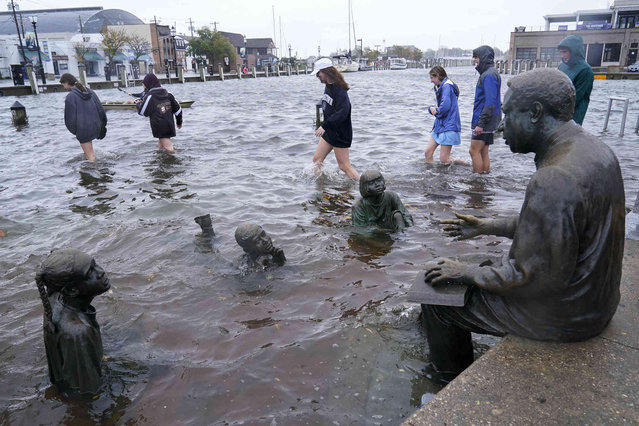 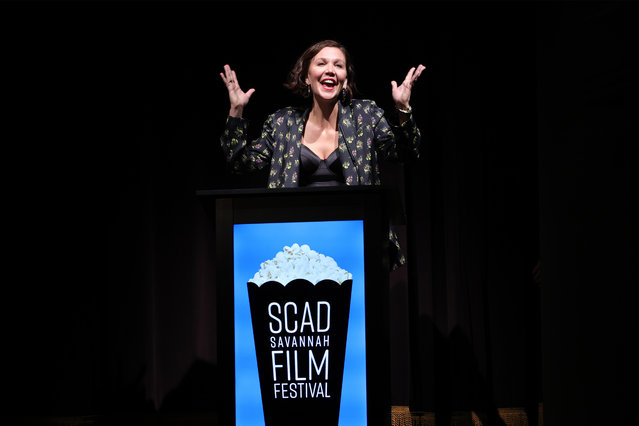 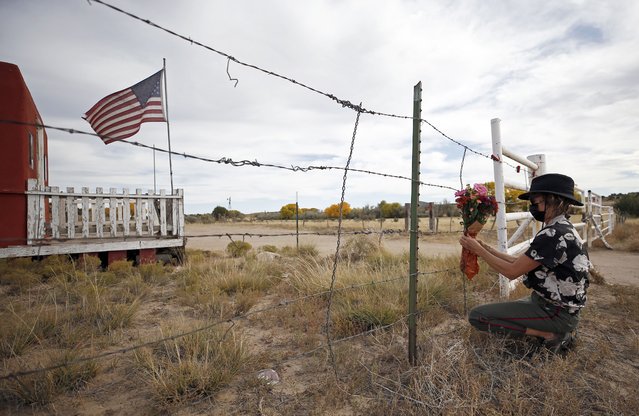 A woman, who did not want to give her name, places a flower bouquet at the entrance of the Bonanza Creek Film Ranch in Santa Fe, N.M., Saturday, October 23, 2021. An assistant director unwittingly handed actor Alec Baldwin a loaded weapon and told him it was safe to use in the moments before the actor fatally shot cinematographer Halyna Hutchins on the set of a Western, court records released Friday show. (Photo by Andres Leighton/AP Photo) 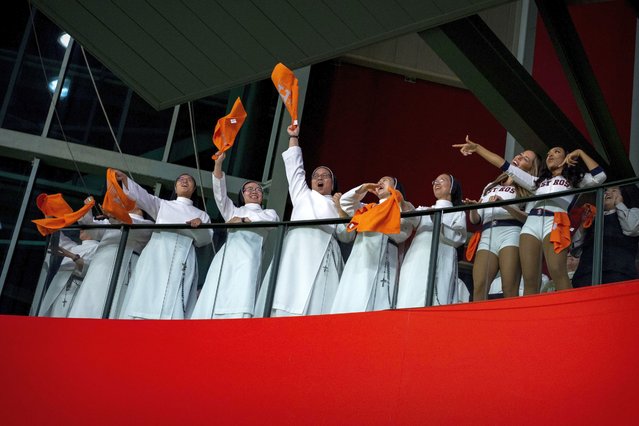 Members of the Dominican Sisters of Mary Immaculate Province celebrated the seventh inning between the Houston Astros and the Atlanta Braves during the 2021 World Series at Minute Maid Park, Houston on October 26, 2021. (Photo by Jerome Miron/USA TODAY Sports) 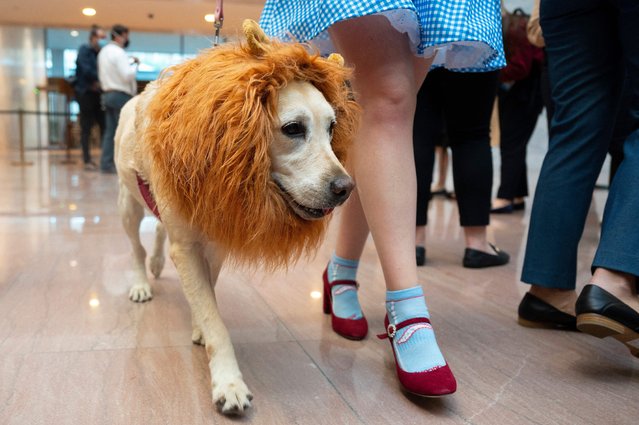 A woman dressed as the Wizard of Oz’s Dorothy walks her dog dressed as the Cowardly Lion as they attend the annual Congressional Dog Costume Parade on Capitol Hill in Washington, DC, on October 27, 2021. (Photo by Jim Watson/AFP Photo) 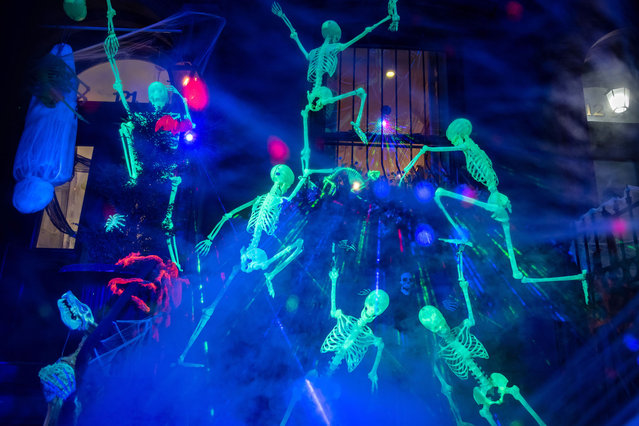 A home is decorated with glow in the dark skeletons in Murray Hill for Halloween on October 25, 2021 in New York City. Many Halloween events and large-scale decorations are back this year after many events were cancelled in 2020 due to the coronavirus pandemic. (Photo by Alexi Rosenfeld/Getty Images) 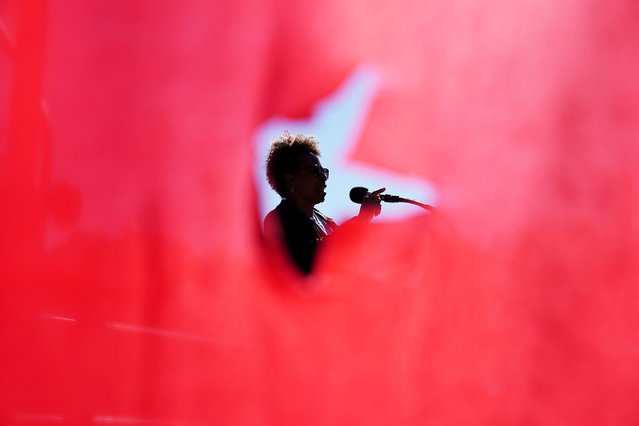 Carol Joyner, Labor Project Director for “Family Values at Work” speaks to activists from immigration, climate and other progressive groups as they hold a rally to call on Democrats in Congress to pass legislation on a range of issues including green jobs and infrastructure, child care, medicare expansion and a path to citizenship for immigrants on Capitol Hill in Washington, U.S. October 27, 2021. (Photo by Shuran Huang/Reuters) 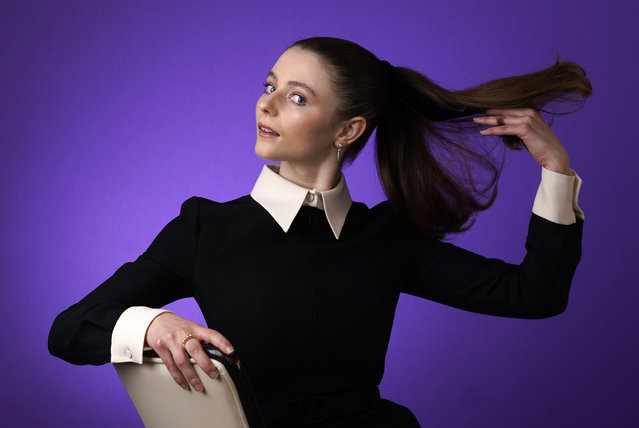