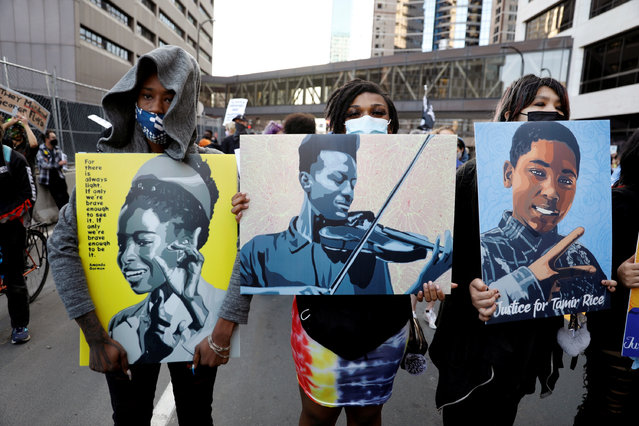 Protesters march on the day of opening statements in the trial of the former police officer Derek Chauvin, who is accused of killing George Floyd last year in Minneapolis, Minnesota on March 29, 2021. (Photo by Octavio Jones/Reuters) 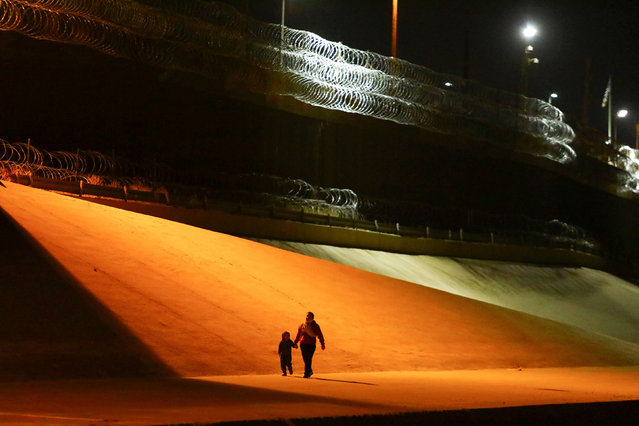 A mother and her son, migrants from Honduras, walk after crossing the Rio Bravo river to turn themselves in to U.S Border Patrol agents to request for asylum in El Paso, Texas, U.S., as seen from Ciudad Juarez, Mexico, March 29, 2021. (Photo by Edgard Garrido/Reuters) 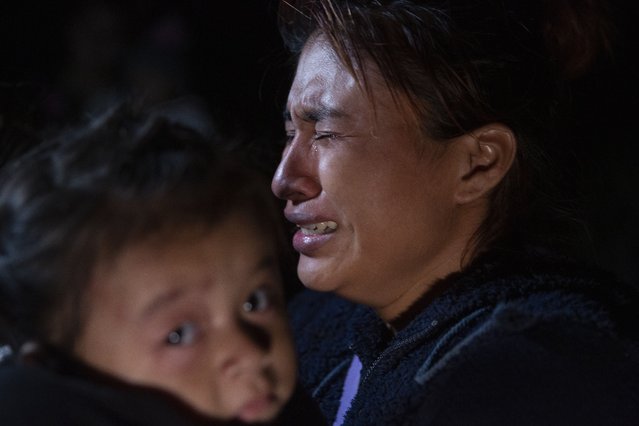 A woman from Guatemala weeps as she carries her child after being smuggled across the Rio Grande river in Roma, Texas Tuesday, March 30, 2021. Roma, a town of 10,000 people with historic buildings and boarded-up storefronts in Texas' Rio Grande Valley, is the latest epicenter of illegal crossings, where growing numbers of families and children are entering the United States to seek asylum. (Photo by Dario Lopez-Mills/AP Photo) 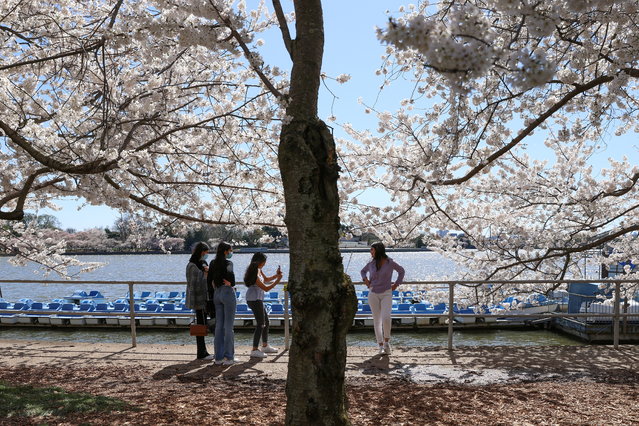 Visitors take photos near the annual cherry blossoms at the Tidal Basin along the National Mall in Washington, U.S., March 29, 2021. (Photo by Tom Brenner/Reuters) 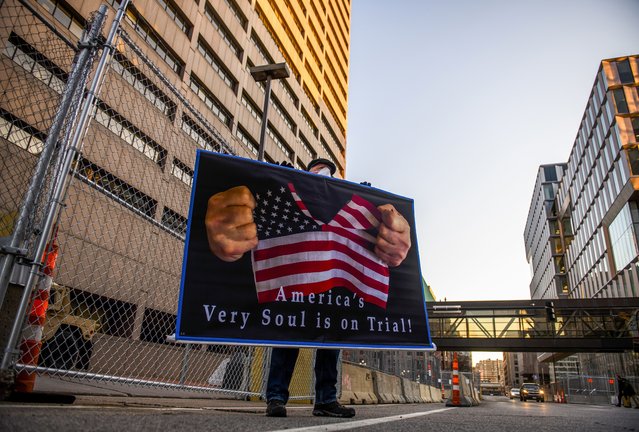 Stephen Parlato holds a sign that reads “America's very soul is on trial” outside the Hennepin County Government Center on March 29, 2021 in Minneapolis, Minnesota. Opening statements are set to begin today in the trial of former Minneapolis Derek Chauvin who is charged with multiple counts of murder in the death of George Floyd last May. (Photo by Stephen Maturen/Getty Images) 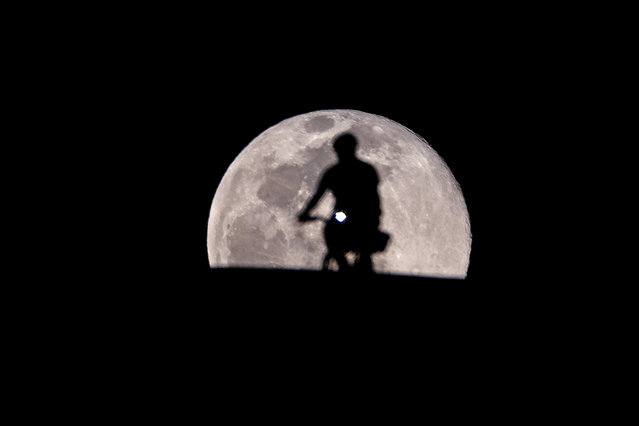 A cyclist is silhouetted against the backdrop of a full moon, also known as “Worm Moon”, rises in Los Angeles, Sunday, March 28, 2021. (Photo by Ringo Chiu/ZUMA Wire/Rex Features/Shutterstock) 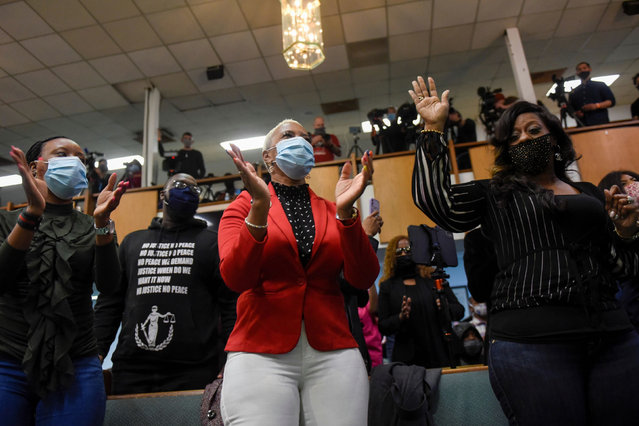 Floyd family members react on Sunday evening during a prayer vigil hosted by Rev. Al Sharpton and Attorney Ben Crump on behalf of the Floyd family at the Greater Friendship Missionary church, the day before opening statements in the trial of former police Derek Chauvin, who is facing murder charges in the death of George Floyd, in Minneapolis, Minnesota, March 28, 2021. (Photo by Nicholas Pfosi/Reuters) 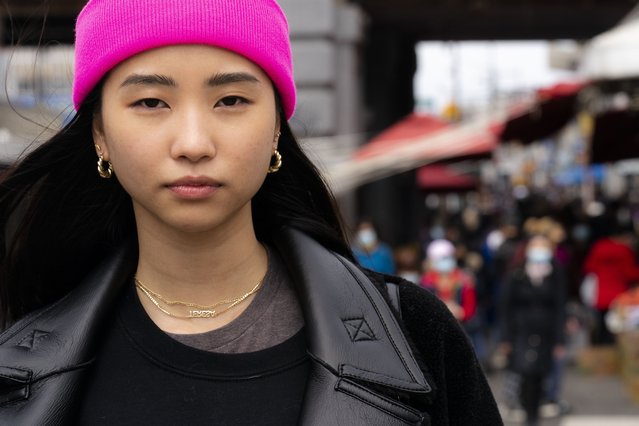 Teresa Ting stands for a portrait, Wednesday, March 31, 2021, in the Flushing neighborhood of the Queens borough of New York. The vicious assault of a 65-year-old woman while walking to church this week near New York City’s Times Square has heightened already palpable levels of outrage over anti-Asian attacks that started with the pandemic. Ting, a 29-year-old Chinese American, started what has become the Main Street Patrol following an attack on another older Asian American woman in February. “It literally could have been my mother had it been the wrong place, wrong time”, Ting said of that attack. ​(Photo by John Minchillo/AP Photo) 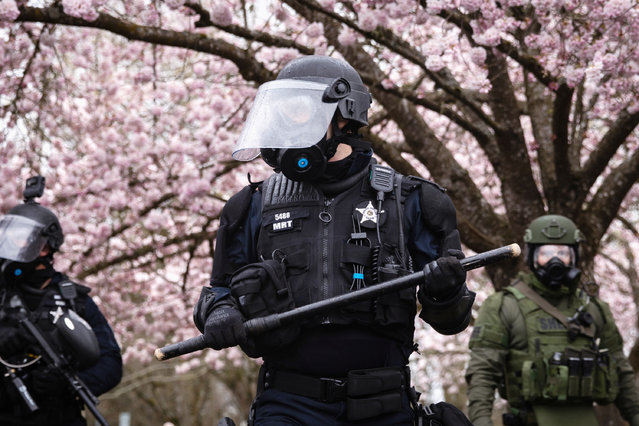 An Oregon State Police officer wears riot gear and holds a baton after an official declaration of an “unlawful assembly” during an anti-fascist rally in Salem, Oregon, U.S., March 28, 2021. (Photo by Maranie R. Staab/Reuters) 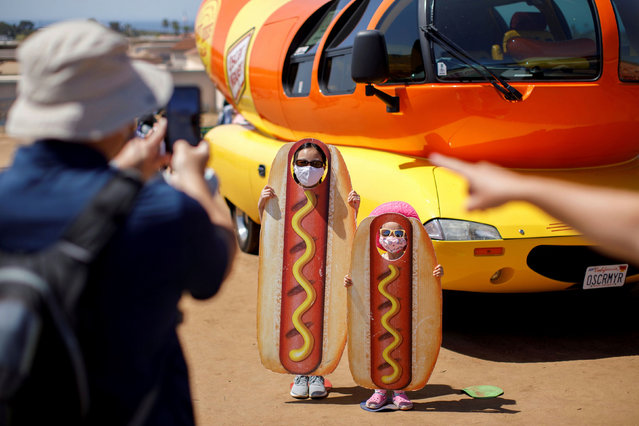 A family takes a picture at the Oscar Myer Wienermobile during a visit to “The Flower Fields”, as California opens up from the pandemic, in Carlsbad, California, U.S., March 31, 2021. (Photo by Mike Blake/Reuters) 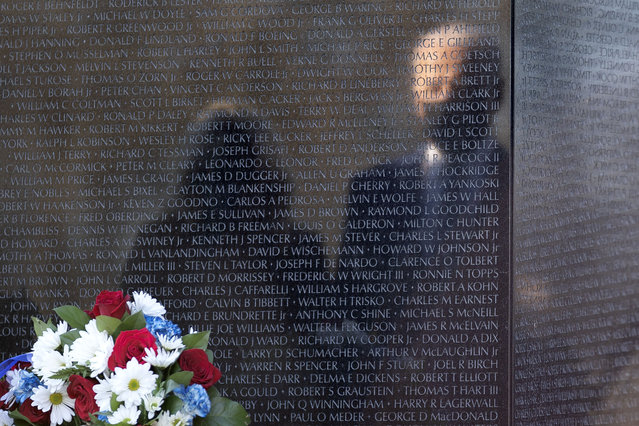 US President Joe Biden and First Lady Dr. Jill Biden are reflected in the Vietnam War Memorial as they visit in Washington, DC, USA on 29 March 2021 to pay their respects on National Vietnam War Veterans Day. (Photo by Stefani Reynolds/Pool/EPA/EFE/Rex Features/Shutterstock) 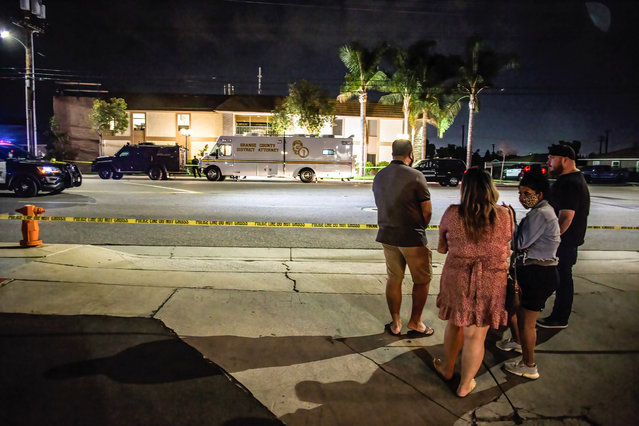 Locals stand and wait for updates across the street from where the shooting occurred on March 31, 2021. On Wednesday evening, four people, including a child, were killed in an office building in Orange, California. The suspect and another person were injured as well. This is the third major shooting in the United States in the last three weeks. (Photo by Stanton Sharpe/SOPA Images/Rex Features/Shutterstock) 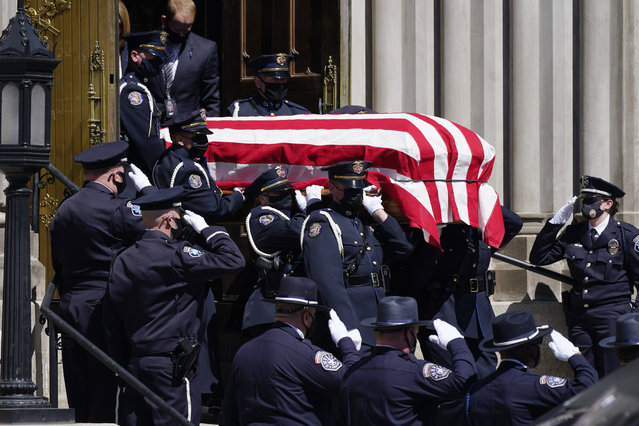 The casket carrying the body of fallen Boulder, Colo., Police Department officer Eric Talley is carried by a Denver Police honor guard to a waiting hearse after a service at the Cathedral Basilica of the Immaculate Conception Monday, March 29, 2021, in Denver. Talley and nine other people were killed on Monday, March 22, during a mass shooting at a grocery store in Boulder. (Photo by David Zalubowski/AP Photo) 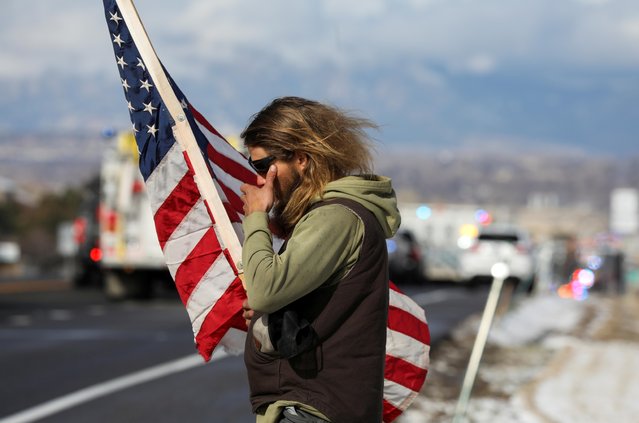 A man reacts while watching a procession of police vehicles approaching the memorial service for slain Boulder Police Officer Eric Talley, who was killed during a mass shooting on March 22 at King Soopers grocery store, in Lafayette, Colorado, U.S., March 30, 2021. (Photo by Jim Urquhart/Reuters) 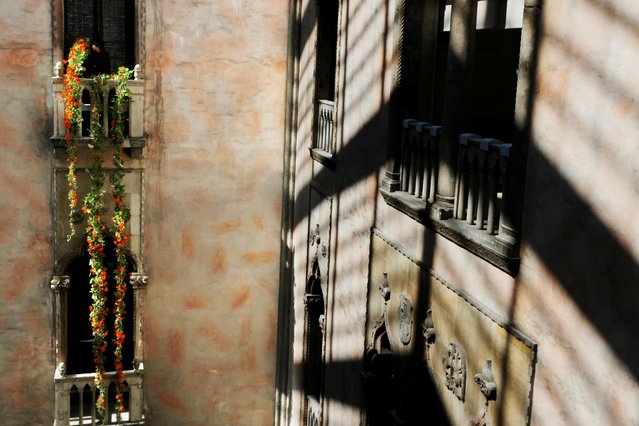 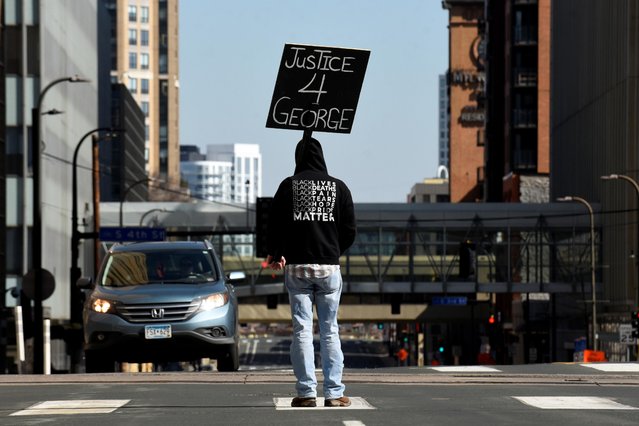 A demonstrator blocks traffic outside the Hennepin County Government Center during the first day of the trial of former police Derek Chauvin, who is facing murder charges in the death of George Floyd, in Minneapolis, Minnesota, U.S., March 29, 2021. (Photo by Nicholas Pfosi/Reuters) 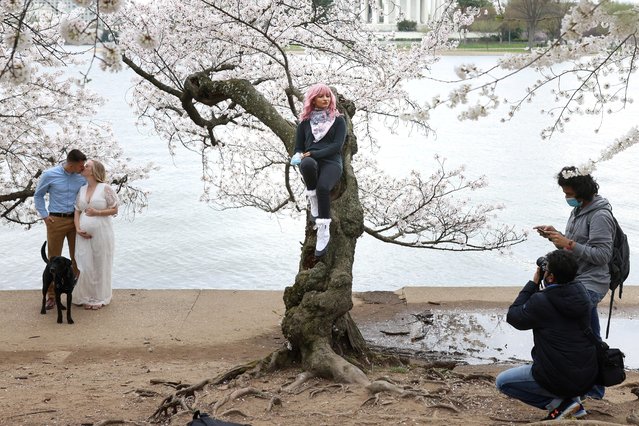 Priyanka Kaswan poses for a photo while sitting on a cherry tree at the Tidal Basin near the National Mall in Washington, U.S., March 31, 2021. (Photo by Tom Brenner/Reuters) 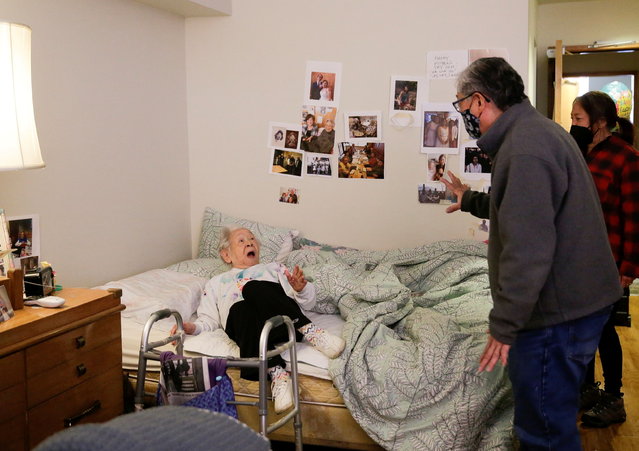 Yoshia Uomoto, 98, reacts as her son Mark Uomoto and niece Gail Yamada surprise her with their first in-person visit in a year after indoor visitation restrictions due to the coronavirus disease (COVID-19) were lifted at Nikkei Manor, an assisted living facility primarily serving Japanese-American seniors, in Seattle, Washington, U.S. March 30, 2021. Residents, who have all been fully vaccinated, can visit with family for an hour at a time. (Photo by Lindsey Wasson/Reuters) 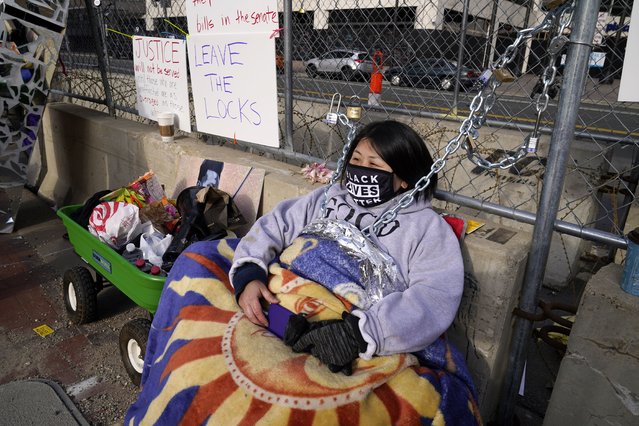 Kia Hirt sits with a chain attached to a fence while protesting outside the Hennepin County Government Center, Tuesday, March 30, 2021, in Minneapolis where the trial for former Minneapolis police officer Derek Chauvin continues. Chauvin is charged with murder in the death of George Floyd during an arrest last May in Minneapolis. (Photo by Jim Mone/AP Photo)
Edit Del
07 Apr 2021 09:46:00, post received 0 comments
Publication archive:
←   →
Popular tags:
All tags
Last searches: