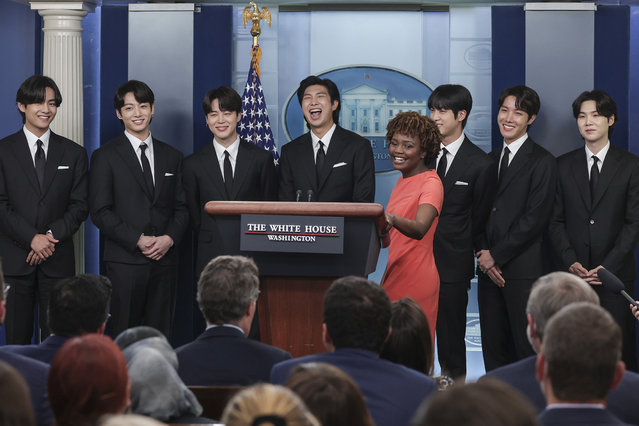 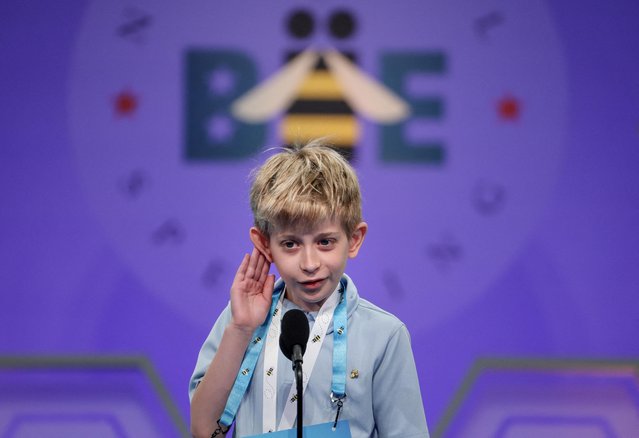 Miles K. Hubbert, a 4th grader from The Kent School in Baltimore, Maryland, asks for more information about the word he needs to spell during a preliminary round of the annual Scripps National Spelling Bee in National Harbor, Maryland, U.S., May 31, 2022. (Photo by Evelyn Hockstein/Reuters) 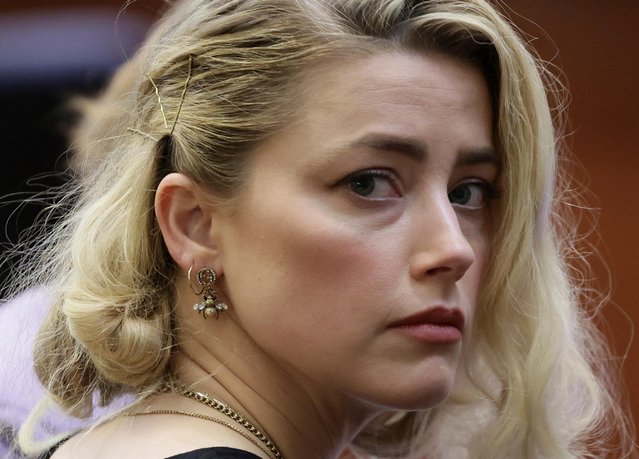 Actor Amber Heard waits before the jury said that they believe she defamed ex-husband Johnny Depp while announcing split verdicts in favor of both her ex-husband Johnny Depp and Heard on their claim and counter-claim in the Depp v. Heard civil defamation trial at the Fairfax County Circuit Courthouse in Fairfax, Virginia, June 1, 2022. (Photo by Evelyn Hockstein/Pool via Reuters) 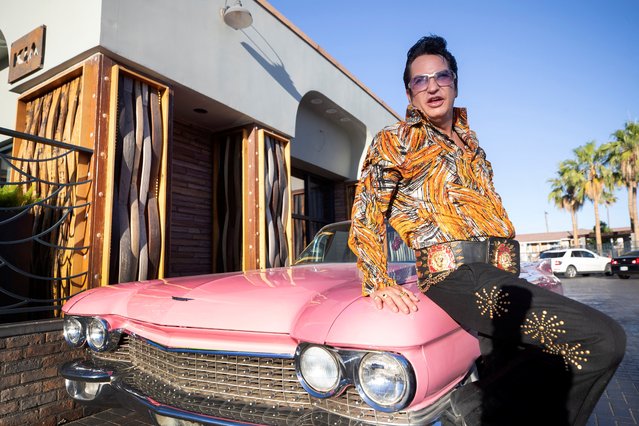 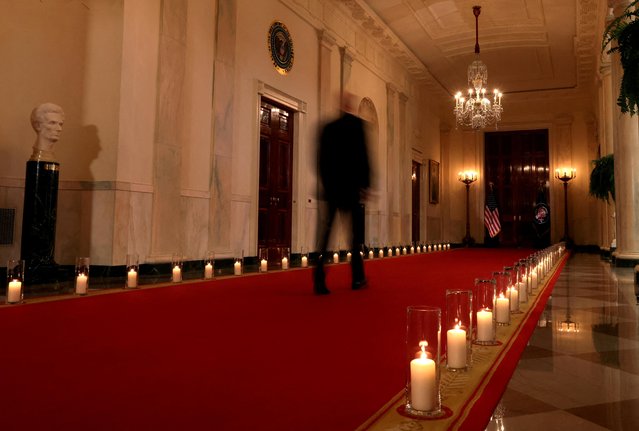 U.S. President Joe Biden (blurred by a slow shutter speed) walks down a hallway lined with candles meant to represent victims of gun violence after he spoke about gun violence during a primetime address from the White House in Washington, U.S., June 2, 2022. (Photo by Leah Millis/Reuters) 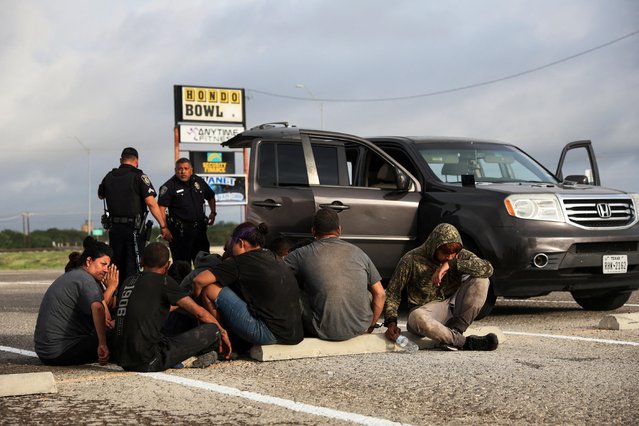 Asylum seeking migrants from Central America sit next to a vehicle that was stopped by police after crossing the Rio Grande into Eagle Pass, Texas, from Mexico along U.S. Route 90, in Hondo, Texas, U.S., June 1, 2022. U.S. authorities, blocked by a federal judge from lifting COVID-19 restrictions that empower agents at the U.S.-Mexico border to turn back migrants, continue to enforce the Title 42 rules which result in the fast expulsion of migrants to Mexico or other countries. (Photo by Shannon Stapleton/Reuters) 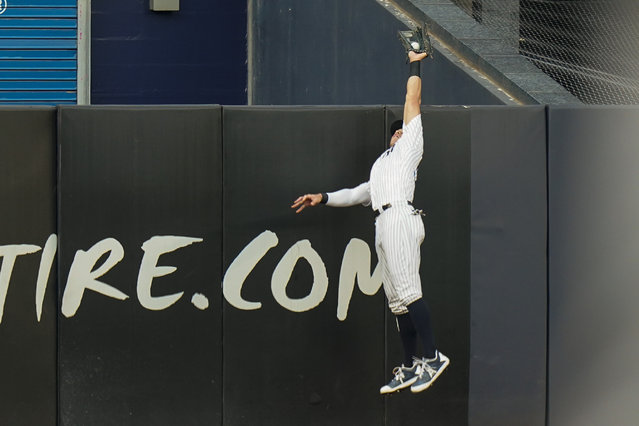 New York Yankees' Aaron Judge catches a ball hit by Los Angeles Angels' Shohei Ohtani, of Japan, for an out during the first inning of a baseball game Tuesday, May 31, 2022, in New York. (Photo by Frank Franklin II/AP Photo) 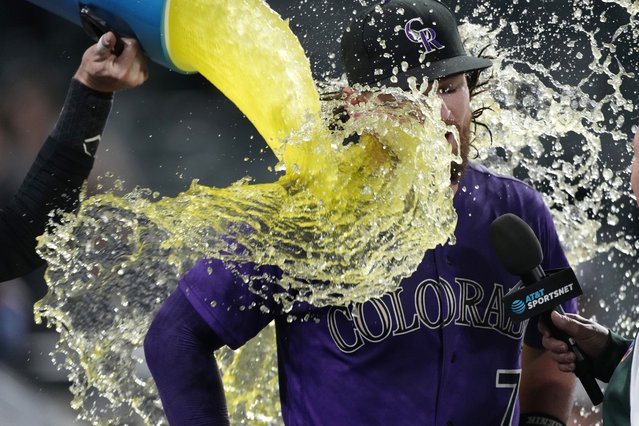 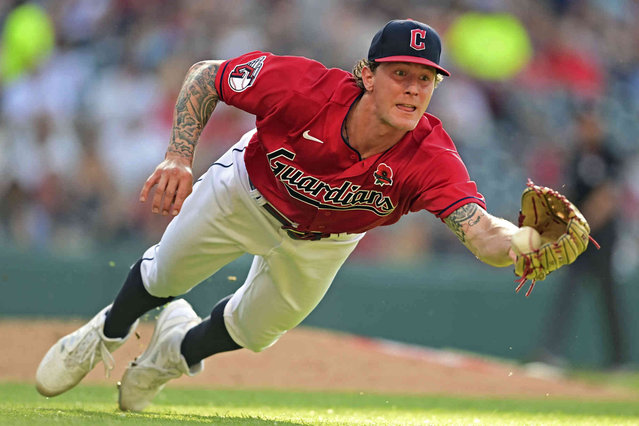 Cleveland Guardians starting pitcher Zach Plesac dives for a ball hit by Kansas City Royals' Andrew Benintendi in the third inning of a baseball game, Monday, May 30, 2022, in Cleveland. Plesac caught the ball on a bounce then flipped it to first base to put out Benintendi. (Photo by David Dermer/AP Photo) 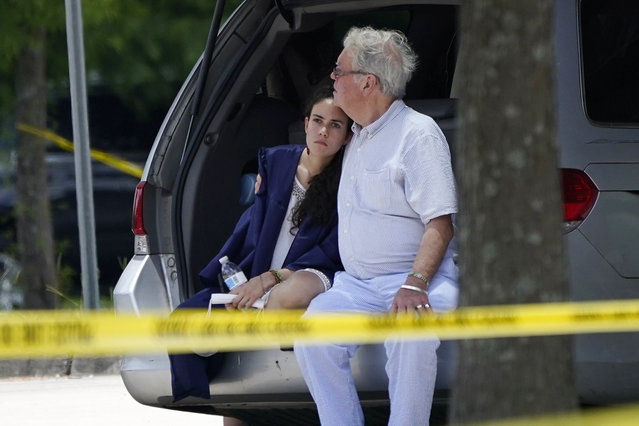 A man comforts a young woman wearing a graduation gown within the crime scene of a shooting at Xavier University in New Orleans, Tuesday, May 31, 2022. (Photo by Gerald Herbert/AP Photo) 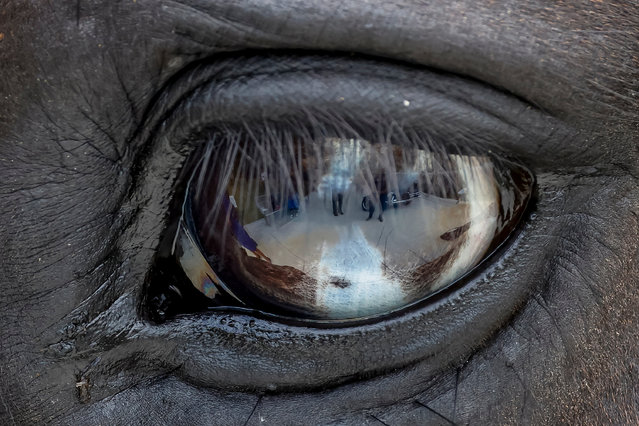 A horse with the Atlanta Police Department's Mounted Patrol watches as Atlanta Mayor Andre Dickens announces a summer safety plan at Westside Park in Atlanta, Georgia, USA, 31 May 2022. City officials, including the Atlanta Police Department, are working to reduce the increase in crime that traditionally comes as children are out of school for summer break. (Photo by Erik Lesser/EPA/EFE) 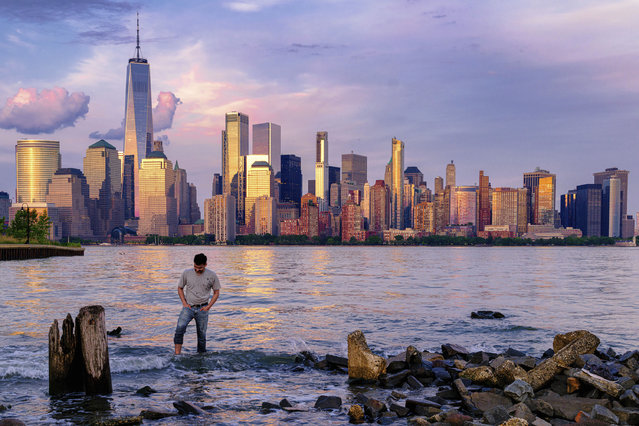 A man checks his footing as he wades through the Morris Canal Outlet in Jersey City, N.J., as the sun sets on the lower Manhattan skyline of New York City, Tuesday, May 31, 2022. (Photo by J. David Ake/AP Photo) 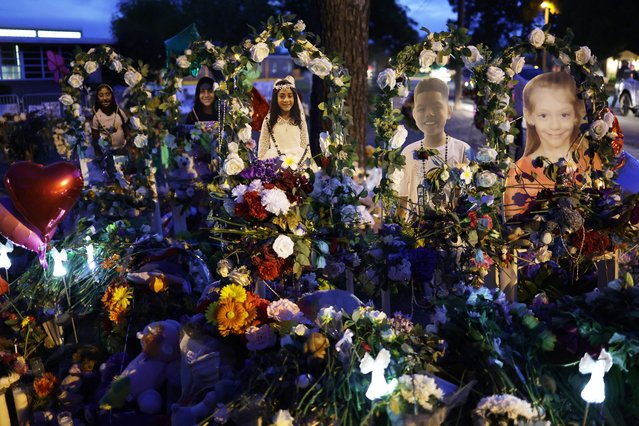 Flowers and photographs are seen at a memorial dedicated to the victims of the mass shooting at Robb Elementary School on June 2, 2022 in Uvalde, Texas. 19 students and two teachers were killed on May 24 after an 18-year-old gunman opened fire inside the school. Wakes and funerals for the 21 victims are scheduled throughout the week. (Photo by Alex Wong/Getty Images) 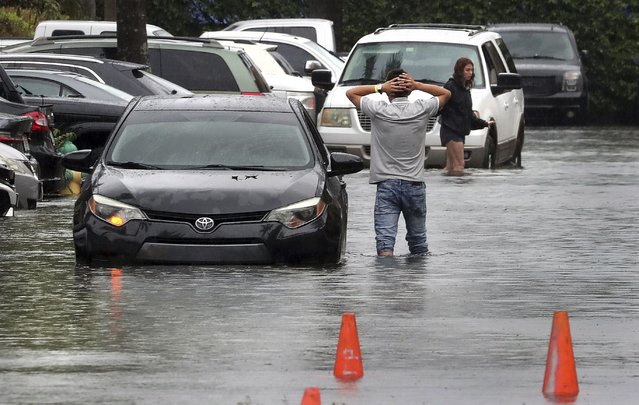 A driver climbs out of his stalled car after he tried to move it to higher ground from the flooded parking lot at the Beachwalk at Sheridan Apartments in Dania Beach, Fla., on Saturday, June 4, 2022. (Photo by Mike Stocker/South Florida Sun-Sentinel via AP Photo) 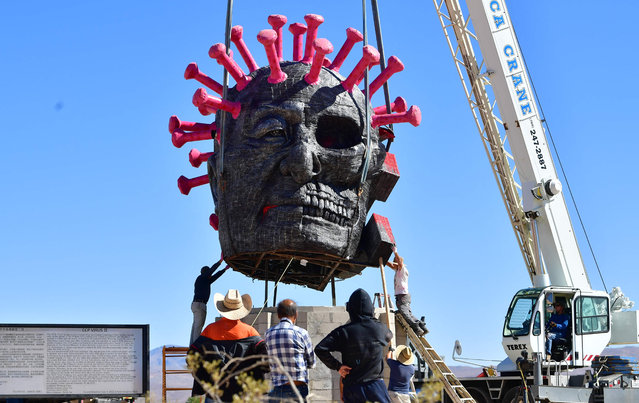 People help place artist Chen Weiming's latest sculpture, “CCP Virus II” on a concrete pedestal at Liberty Sculpture Park in Yermo, California, on June 1, 2022, alongside other sculptures by the artist. A new sculpture “CCP Virus II”, made of steel and weighing 10 tons, was displayed today before the weekend commemoration marking the anniversary of June 4, 1989 in Tiananmen. Chen Weiming unveiled his original sculpture “CCP Virus” here last June, but it was destroyed a month later, burned to the ground. In March 2022, federal prosecutors charged five men acting on behalf of the Chinese government with destroying the original sculpture. (Photo by Frederic J. Brown/AFP Photo) 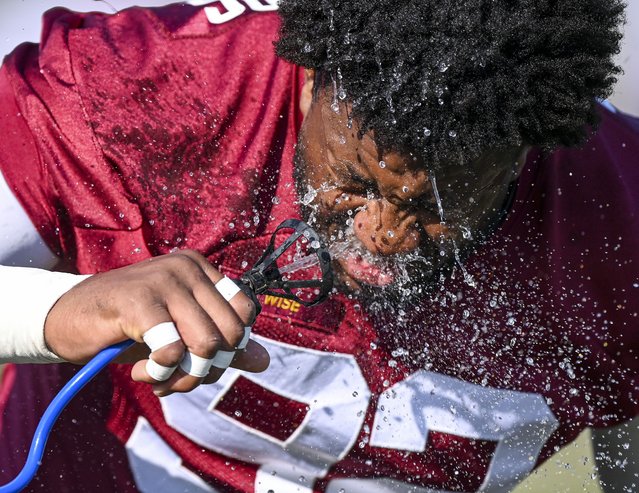 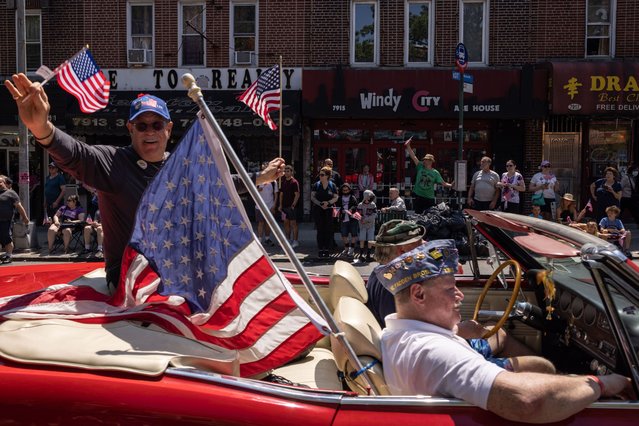 Veterans wave American flags as they participate in the 155th Brooklyn's Memorial Day Parade in Brooklyn, New York, on May 30, 2022. (Photo by Yuki Iwamura/AFP Photo) 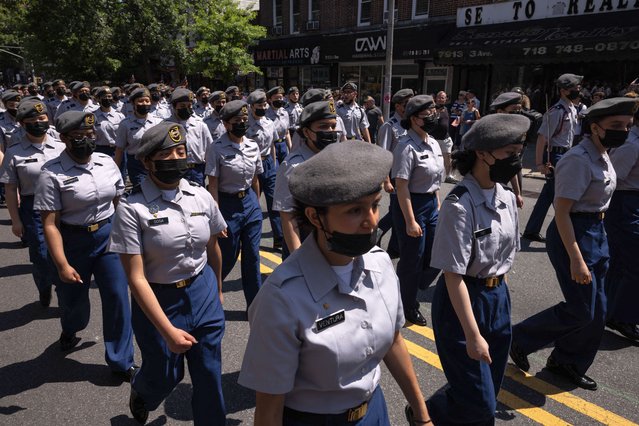 Participants march during the 155th Brooklyn's Memorial Day Parade in Brooklyn, New York, on May 30, 2022. (Photo by Yuki Iwamura/AFP Photo) 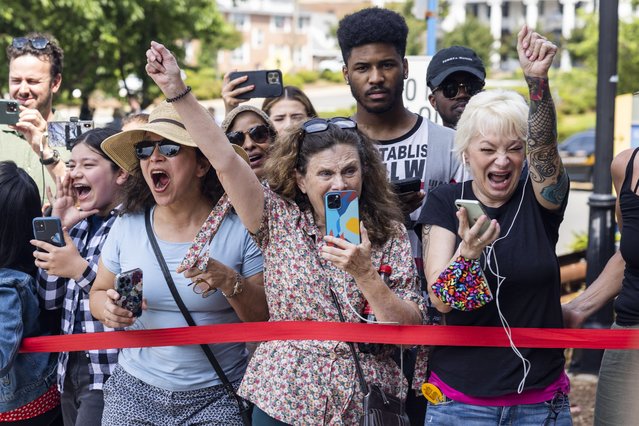 Fans of actor Johnny Depp react outside the Fairfax County Circuit Courthouse to the verdict in his defamation case against actor Amber Heard in Fairfax, Virginia, USA, 01 June 2022. The jury found that US actor Johnny Depp was defamed by his ex-wife, US actor Amber Heard, in his 50 million US dollar defamation lawsuit against her and awarded him with 15 million US dollars. The jury also found that Heard was defamed by Depp through his former attorney, Adam Waldman, and awarded her with two million US dollars. (Photo by Jim Lo Scalzo/EPA/EFE) 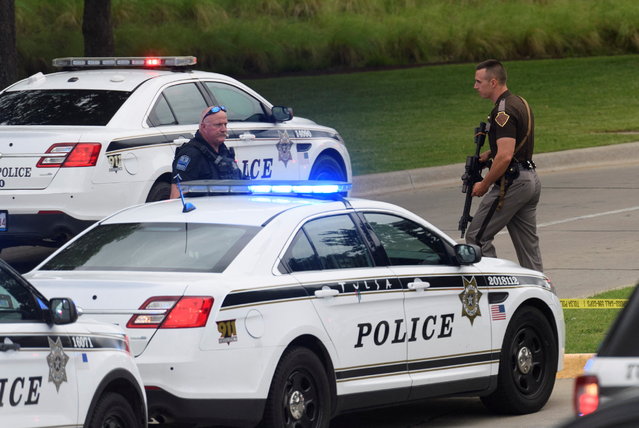