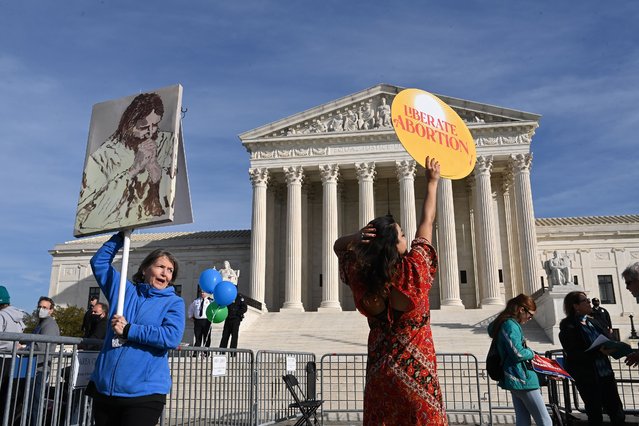 Barbara DuBrul of Long Island, NY, left, stands in the designated area for anti-abortion supporters as an abortion rights supporter, who did not want to give her name, dances nearby outside the Supreme Court of the United States as the court prepares to hear a case out of Mississippi that could challenge the law on abortions on Wednesday December 01, 2021 in Washington, DC. The case could overturn the landmark abortion case of Roe v. Wade. (Photo by Matt McClain/The Washington Post) 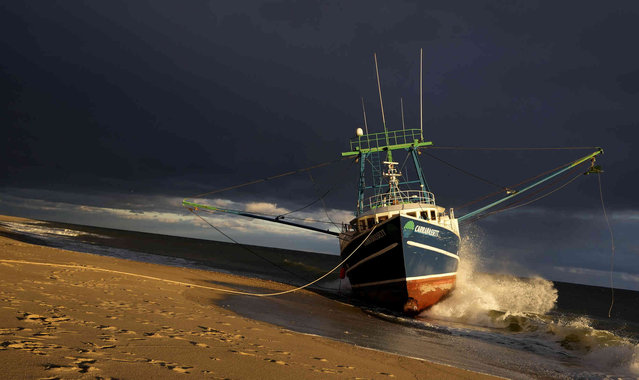 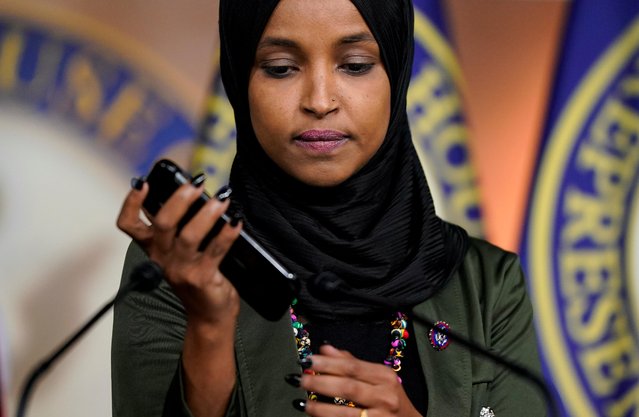 U.S. Representative Ilhan Omar (D-MN) plays a voicemail containing an anti-Muslim message from an unknown person, which she says she recently received, during a news conference addressing the anti-Muslim comments made by Representative Lauren Boebert (R-CO) towards Omar, on Capitol Hill in Washington, U.S., November 30, 2021. (Photo by Elizabeth Frantz/Reuters) 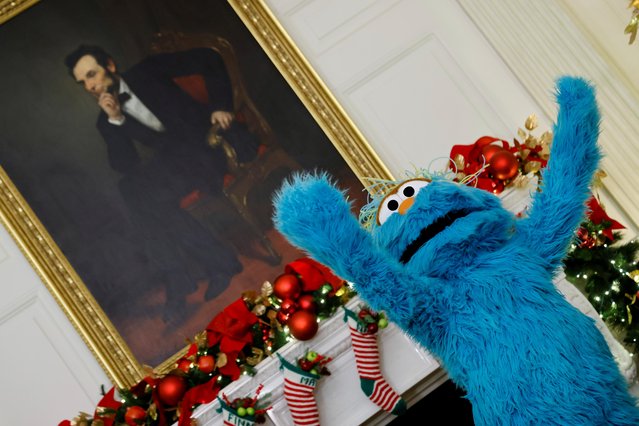 Rosita, a character from the children's television series Sesame Street, gestures in front of Abraham Lincoln's portrait, during an event with children hosted by U.S. first lady Jill Biden of as part of the Christmas decoration and holiday reception kickoff at the White House, in Washington, U.S., November 29, 2021. (Photo by Jonathan Ernst /Reuters) 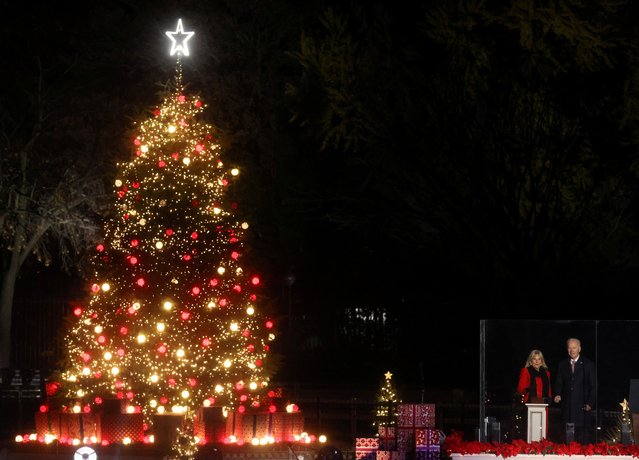 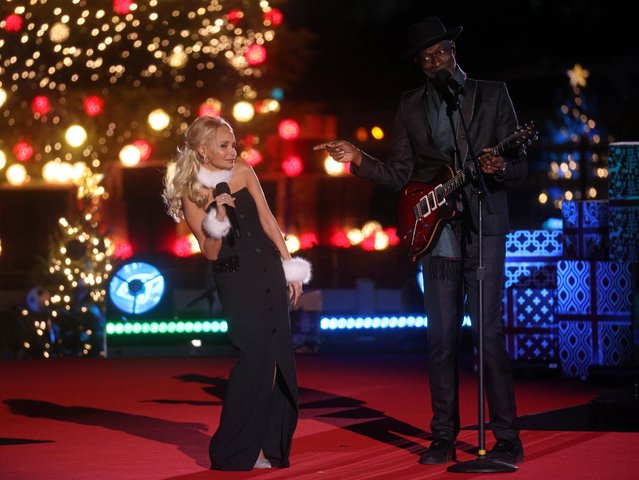 Keb' Mo' and Kristin Chenoweth perform during the National Tree Lighting Ceremony at the Ellipse near the White House in Washington, U.S., December 2, 2021. (Photo by Leah Millis/Reuters) 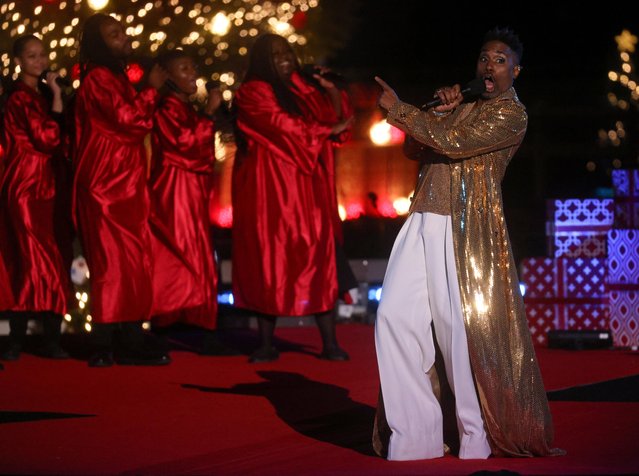 Billy Porter performs during the National Tree Lighting Ceremony at the Ellipse near the White House in Washington, U.S., December 2, 2021. (Photo by Leah Millis/Reuters) 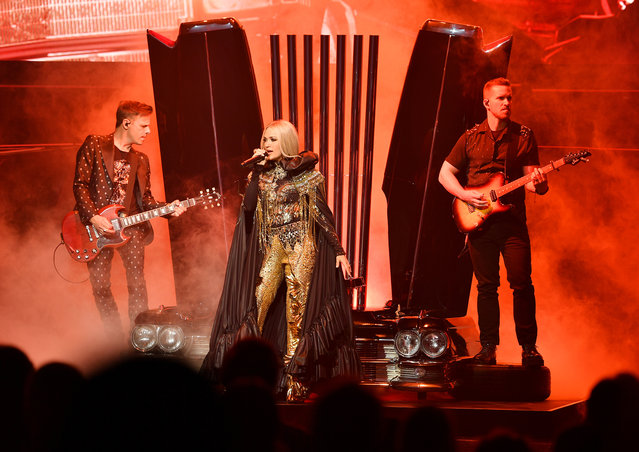 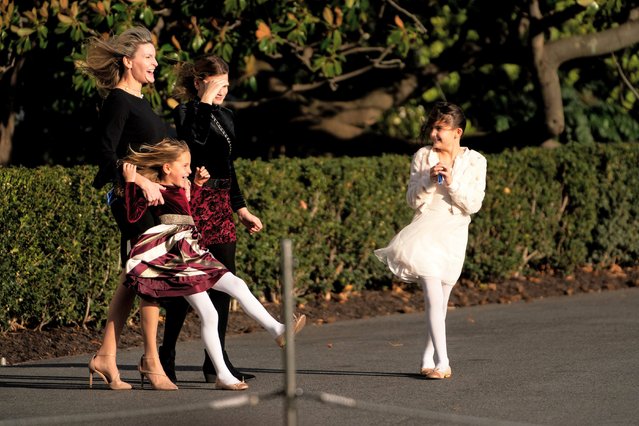 The family of a Marine One pilot watch as Marine one touches down with US President Joe Biden at the White House on December 2, 2021. (Photo by Demetrius Freeman/The Washington Post) 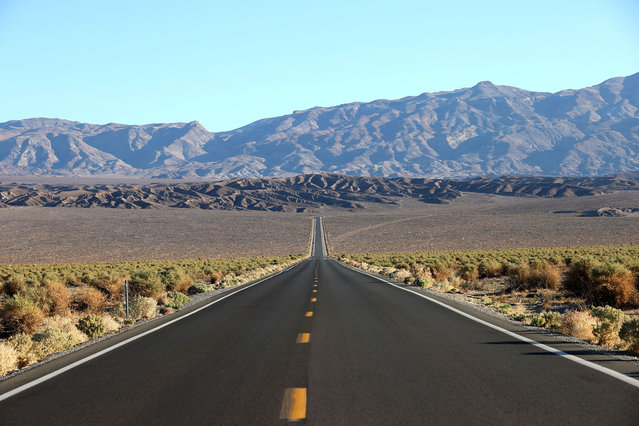 A scenic road is seen at the Death Valley National Park in California, United States on November 28, 2021. (Photo by Tayfun Coskun/Anadolu Agency via Getty Images) 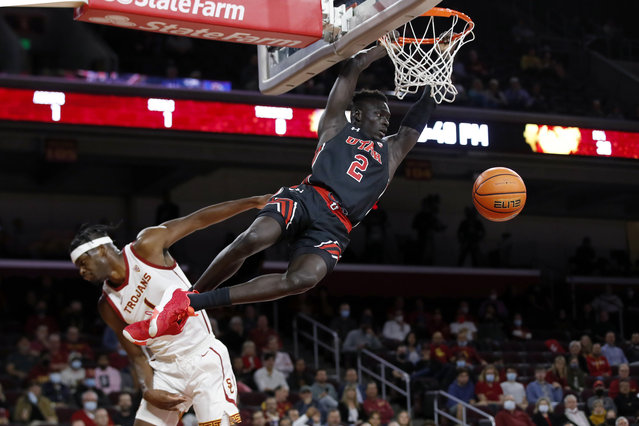 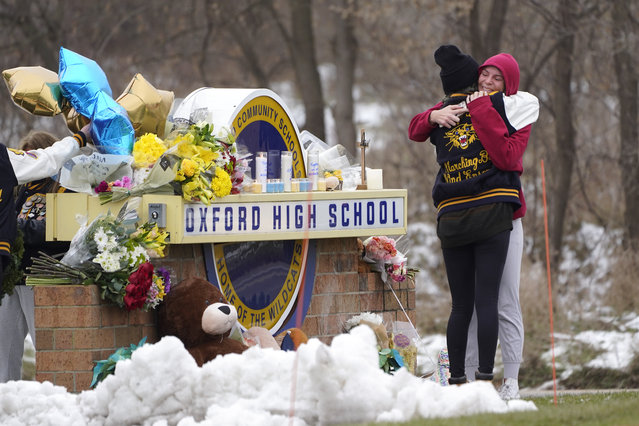 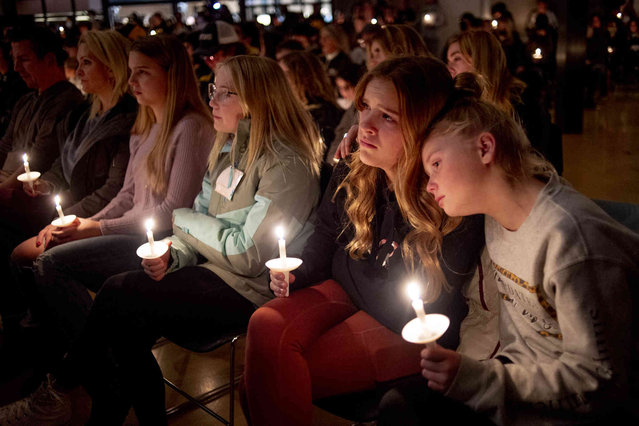 Emerson Miller, right, leans on her friend Joselyn's shoulder as they listen to Jessi Holt, pastor at LakePoint Community Church, during a prayer vigil at the church after the Oxford High School school shooting, Tuesday, November 30, 2021, in Oxford, Mich. (Photo by Jake May/The Flint Journal via AP Photo) 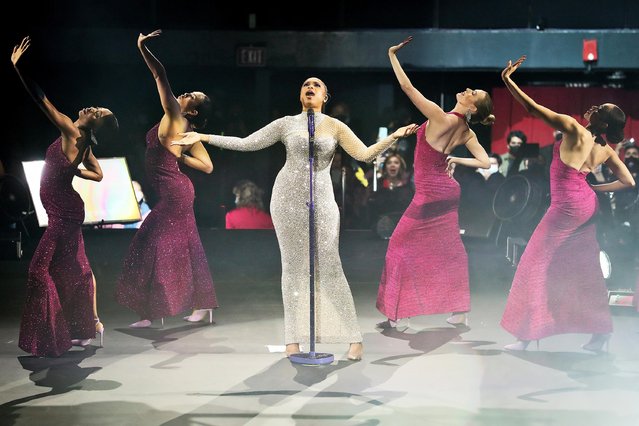 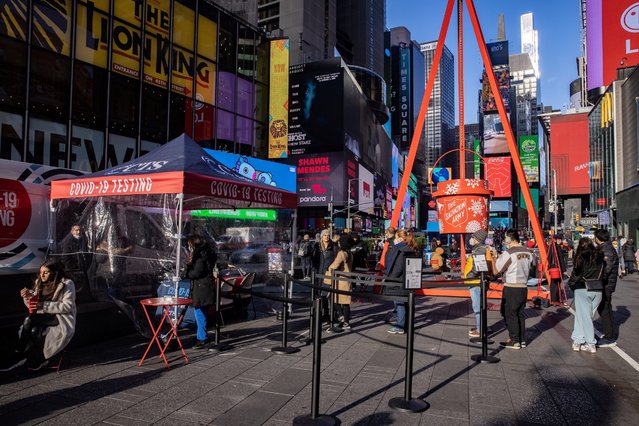 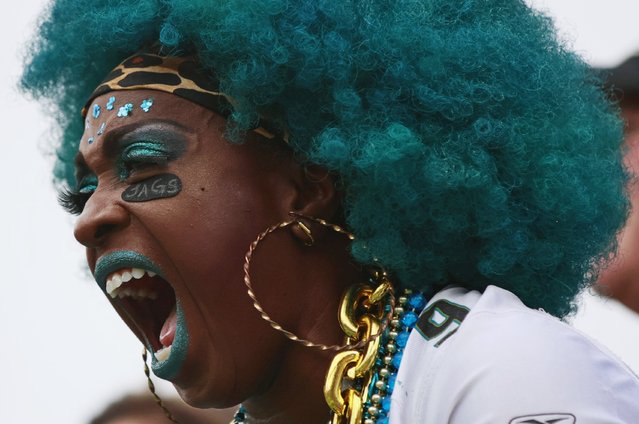 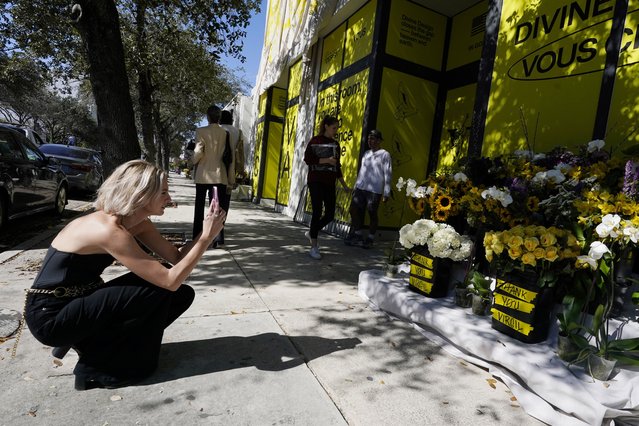 Flowers are left in memory of Virgil Abloh, Louis Vuitton's first Black artistic director, at a church in Miami's Design District, Tuesday, November 30, 2021, in Miami. Abloh, a leading designer whose groundbreaking fusions of streetwear and high couture made him one of the most celebrated tastemakers in fashion and beyond, died of cancer. He was 41. (Photo by Marta Lavandier/AP Photo) 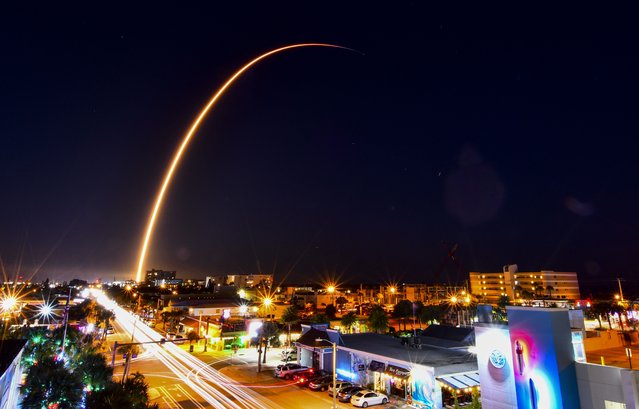 In this image taken with a long exposure, a SpaceX Falcon 9 rocket carrying the 32nd batch of Starlink internet satellites arches over the skyline of Cocoa Beach, Fla., Thursday evening, December 2, 2021, after blasting off from Cape Canaveral. (Photo by Malcolm Denemark/Florida Today via AP Photo) 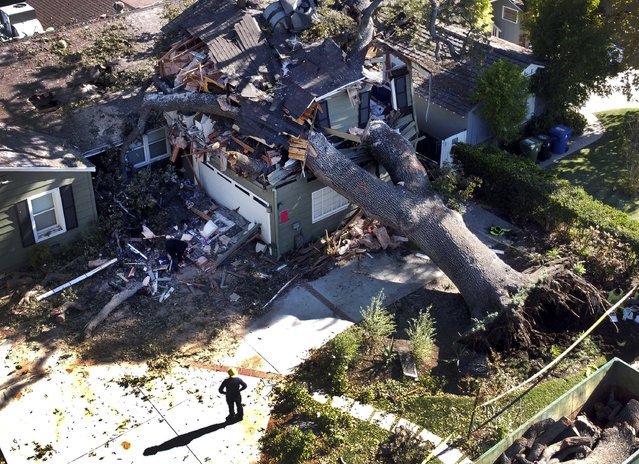 Workers begin to remove a tree, Monday, November 29, 2021, that fell into a house killing a 60-year-old man in the Encino section of Los Angeles. Four people were inside when the tree toppled late Sunday, said a fire department spokesperson. Three people were rescued but the fourth died. (Photo by Dean Musgrove/The Orange County Register via AP Photo) 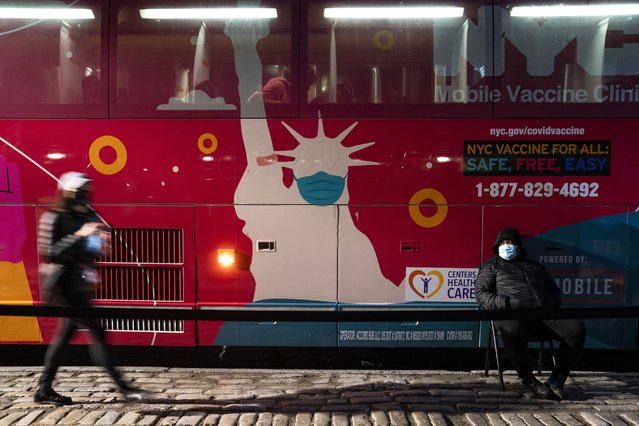 A mobile COVID-19 vaccination and booster shot site operates out of a bus on 59th Street south of Central Park as patients wait on the sidewalk, Thursday, December 2, 2021, in New York. Health officials say multiple cases of the omicron coronavirus variant have been detected in New York, including a man who attended an anime convention in Manhattan in late November and tested positive for the variant when he returned home to Minnesota. (Photo by John Minchillo/AP Photo)
Edit Del
08 Dec 2021 09:06:00, post received 0 comments
Publication archive:
←   →
Popular tags:
All tags
Last searches: