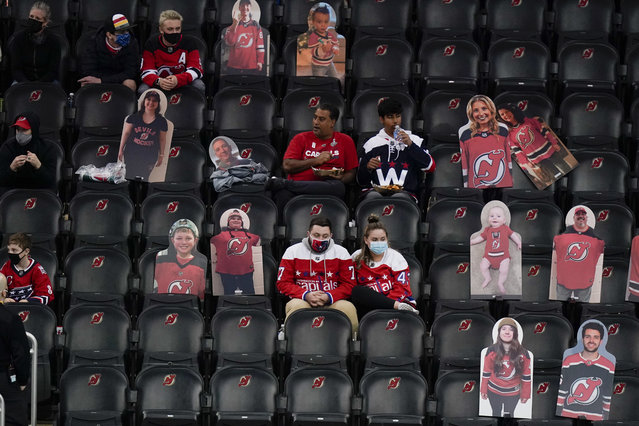 In this April 4, 2021, file photo, Washington Capitals fans sit among cutouts of New Jersey Devils fans as they watch the second period of an NHL hockey game between the Devils and the Capitals in Newark, N.J. Nearly half of new coronavirus infections nationwide are in just five states, including New Jersey – a situation that puts pressure on the federal government to consider changing how it distributes vaccines by sending more doses to hot spots. (Photo by Frank Franklin II/AP Photo) 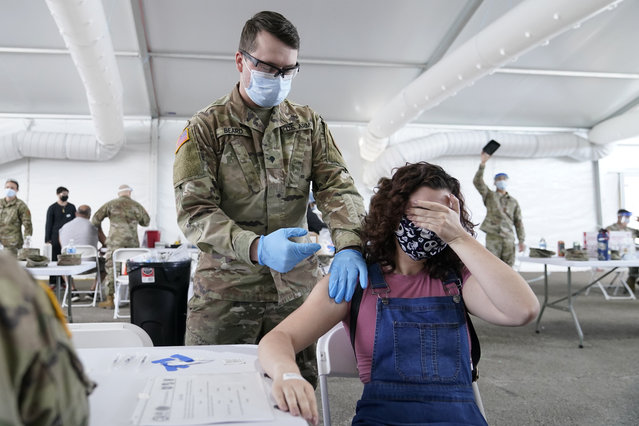 Leanne Montenegro, 21, covers her eyes as she doesn't like the sight of needles, while she receives the Pfizer COVID-19 vaccine at a FEMA vaccination center at Miami Dade College, Monday, April 5, 2021, in Miami. Any adult in Florida is now eligible to receive the coronavirus vaccine. In addition, the state announced that teens ages 16 and 17 can also get the vaccine with parental permission. (Photo by Lynne Sladky/AP Photo) 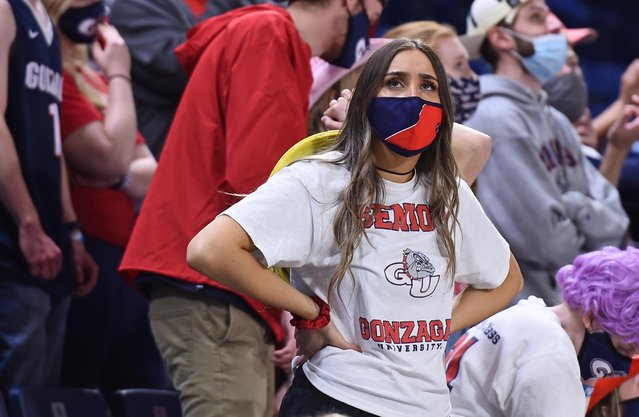 A Gonzaga Bulldogs student reacts after a Bulldog turnover against Baylor in the National Championship game of the 2021 NCAA Men's Basketball Tournament at Lucas Oil Stadium on April 05, 2021 in Indianapolis, Indiana. (Photo by James Snook/USA TODAY Sports) 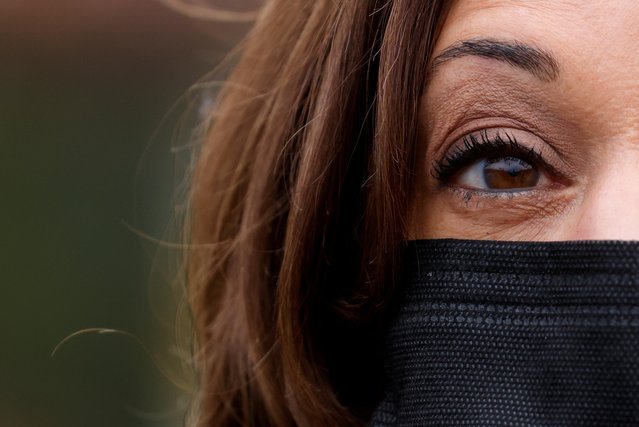 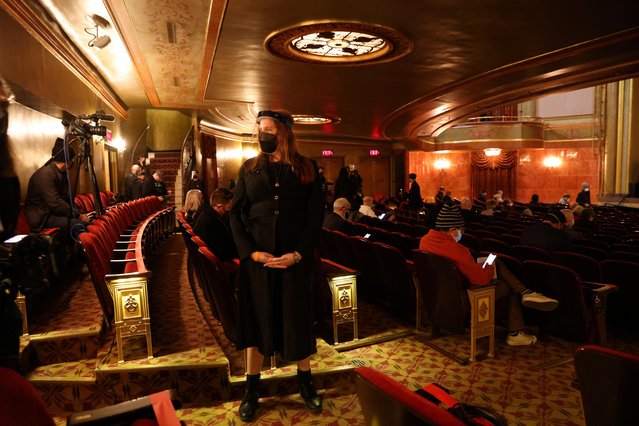 An usher waits to direct audience members to seats wearing a face shield and mask as a precautionary measure at the St. James Theatre for Broadway's first performance since shutting down for Coronavirus (COVID-19) in New York City, U.S., April 3, 2021. (Photo by Caitlin Ochs/Reuters) Asylum-seeking migrants' families wait to be transported by the U.S. Border Patrols after crossing the Rio Grande river into the United States from Mexico in Roma, Texas, U.S. April 5, 2021. (Photo by Go Nakamura/Reuters) 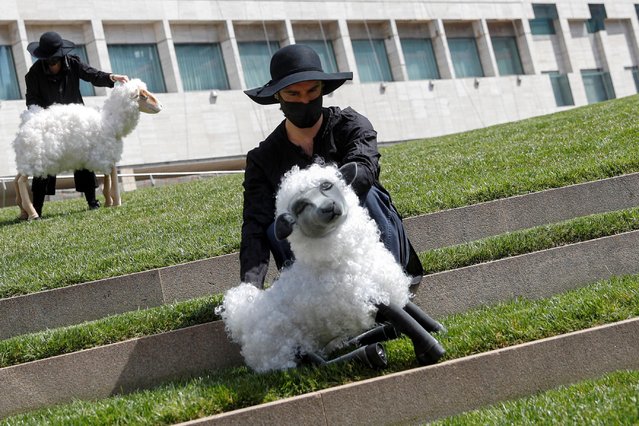 Puppeteer Basil Twist's sheep are on display before a performance by members of the New York Philharmonic for healthcare workers as part of Lincoln Center's Restart Stages, during the coronavirus disease (COVID-19) pandemic, at Lincoln Center's Hearst Plaza in New York City U.S., April 7, 2021. (Photo by Brendan McDermid/Reuters) 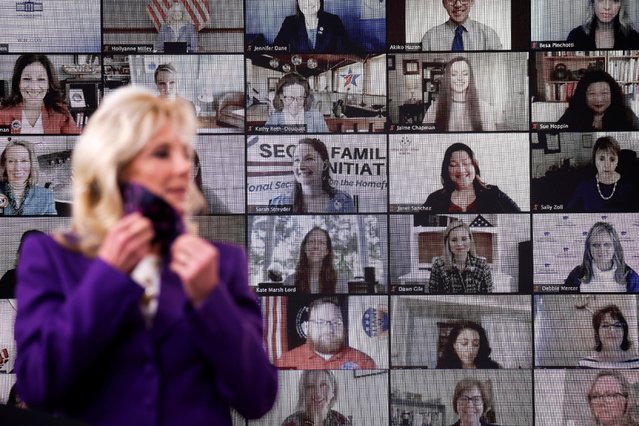 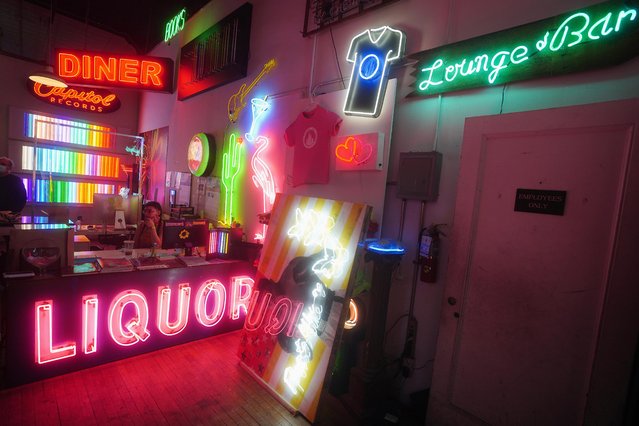 The “Let There Be Neon” store is pictured amid the coronavirus disease (COVID-19) pandemic in the Manhattan borough of New York City, New York, U.S., April 8, 2021. (Photo by Carlo Allegri/Reuters) 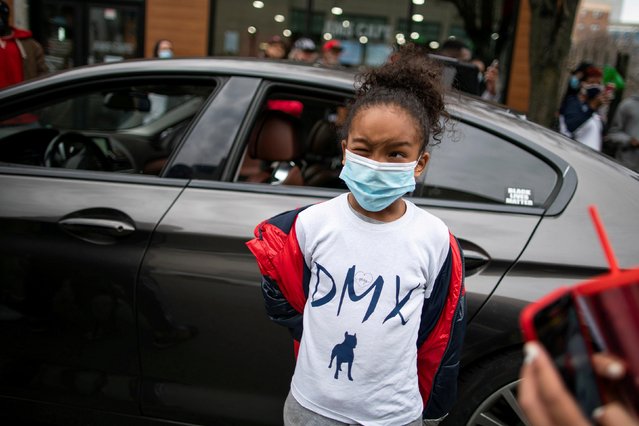 A child poses for pictures as people visit a makeshift memorial for musician and actor DMX outside White Plains Hospital, after he died at the age of 50, in White Plains, New York, U.S., April 9, 2021. (Photo by Eduardo Munoz/Reuters) 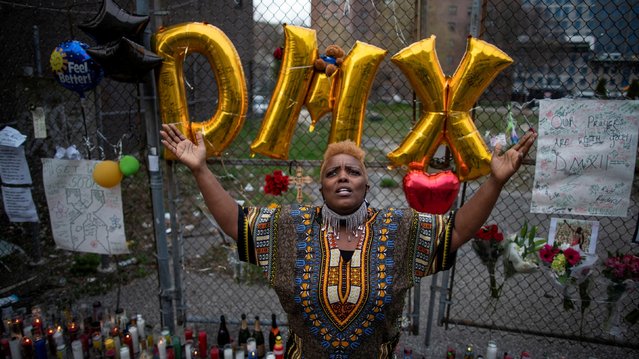 A woman prays at a makeshift memorial for musician and actor DMX outside White Plains Hospital, after he died at the age of 50 in White Plains, New York, U.S., April 9, 2021. (Photo by Eduardo Munoz/Reuters) A police officer pins a woman down during confrontations with protesters, including Black Lives Matter and White Lives Matter activists and with at least a half a dozen arrested, in Huntington Beach, California, U.S., April 11, 2021. (Photo by David Swanson/Reuters) 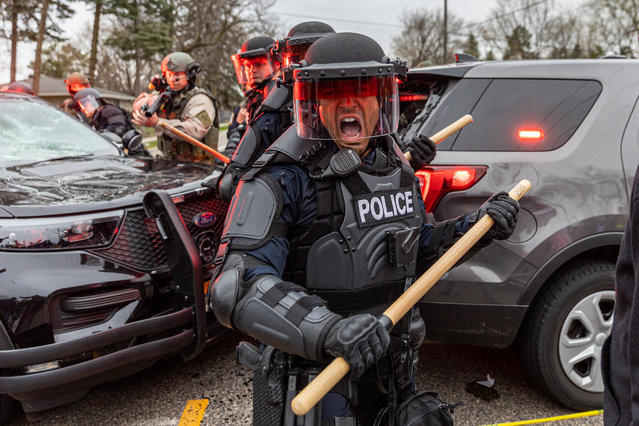 Police officers take cover as they clash with protesters after an officer shot and killed a black man in Brooklyn Center, Minneapolis, Minnesota on April 11,2021. Protests broke out April 11, 2021 night after US police fatally shot a young Black man in a suburb of Minneapolis – where a former police officer is currently on trial for the murder of George Floyd. Hundreds of people gathered outside the police station in Brooklyn Center, northwest of Minneapolis. Police fired teargas and flash bangs at the demonstrators, according to an AFP videojournalist at the scene. (Photo by Kerem Yucel/AFP Photo) 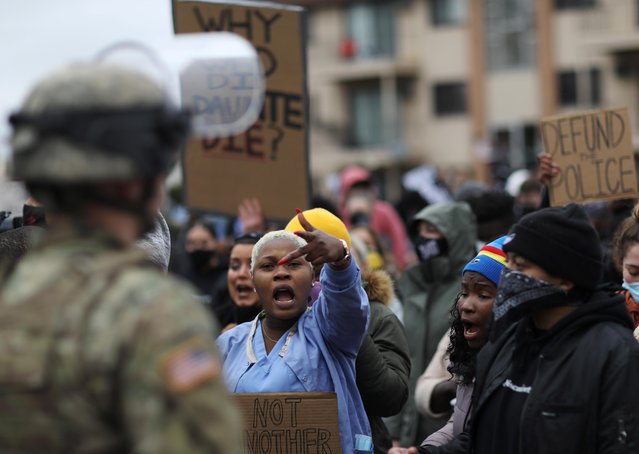 Protesters rally outside Brooklyn Center Police Department a day after Daunte Wright was shot and killed by a police officer, in Brooklyn Center, Minnesota, U.S. April 12, 2021. (Photo by Leah Millis/Reuters) 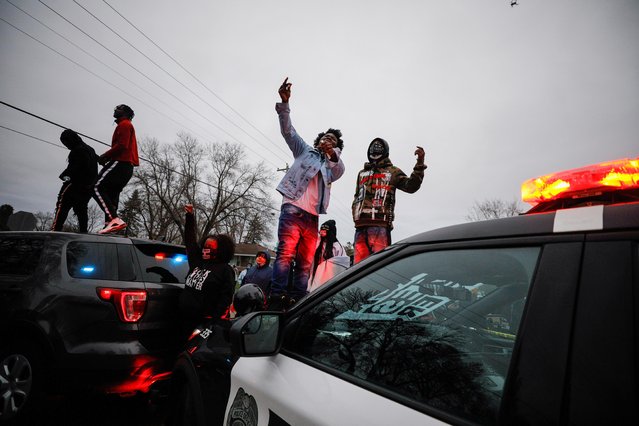 Demonstrators stand on a police vehicle during a protest after police allegedly shot and killed a man, who local media report is identified by the victim's mother as Daunte Wright, in Brooklyn Center, Minnesota, U.S., April 11, 2021. (Photo by Nick Pfosi/Reuters) 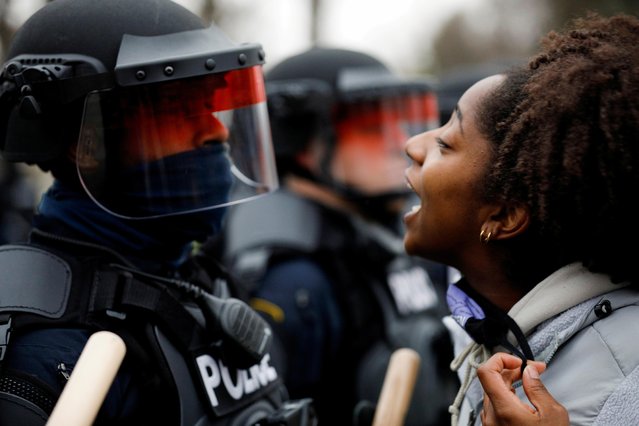 A demonstrator confronts police during a protest after police allegedly shot and killed a man, who local media report is identified by the victim's mother as Daunte Wright, in Brooklyn Center, Minnesota, U.S., April 11, 2021. (Photo by Nick Pfosi/Reuters) 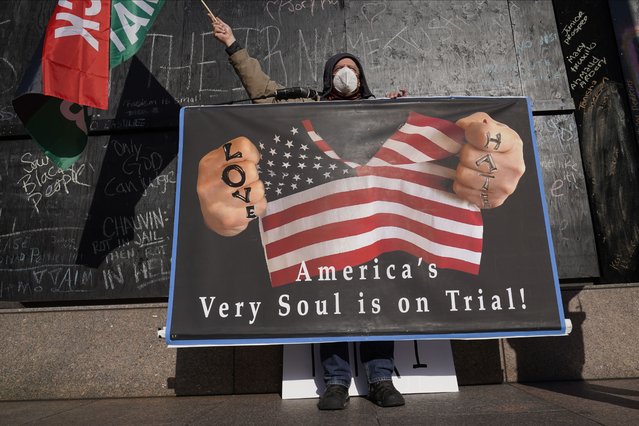 A protester holds a sign across the street from the Hennepin County Government Center Tuesday, April 6, 2021, in Minneapolis where testimony continues in the trial of former Minneapolis police officer Derek Chauvin. Chauvin is charged with murder in the death of George Floyd during an arrest last May in Minneapolis. (Photo by Jim Mone/AP Photo) 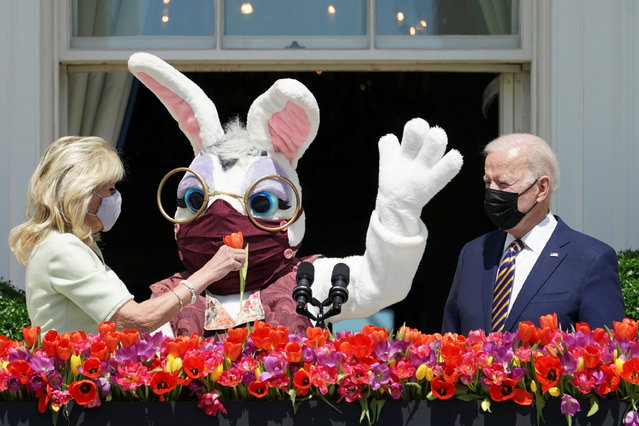 U.S. President Joe Biden stands to deliver his remarks on the tradition of Easter, next to first lady Jill Biden holding a flower and a person wearing an Easter Bunny costume at the Blue Room Balcony of the White House in Washington, U.S. April 5, 2021. (Photo by Kevin Lamarque/Reuters) 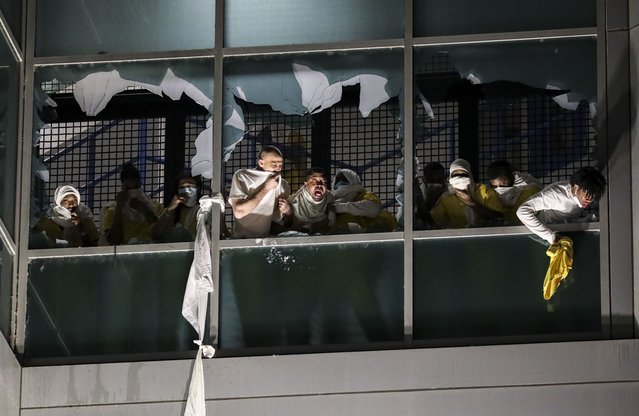 Inmates, from a second cell block, cough and try to breath through broken windows after officers deploy a chemical irritant at the St. Louis Justice Center, known as the city jail, on Sunday, April 4, 2021. Inmates broke windows, set a fire and threw debris to the ground late Sunday at a St. Louis jail that has been plagued by uprisings in recent months. (Photo by Colter Peterson/St. Louis Post-Dispatch via AP Photo) 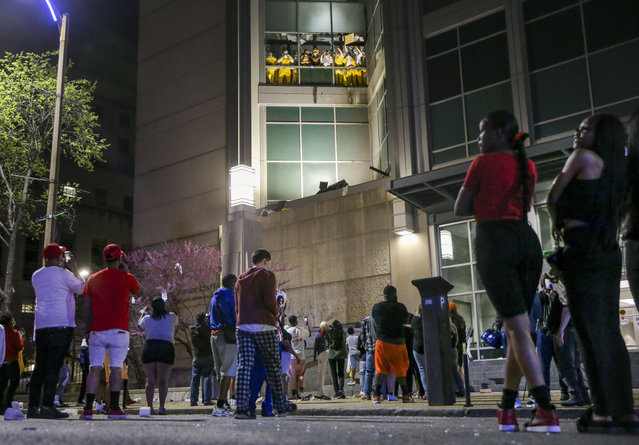