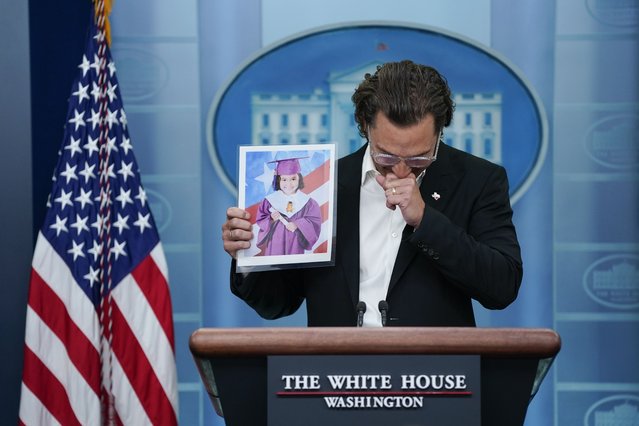 Actor Matthew McConaughey holds an image of Alithia Ramirez, 10, who was killed in the mass shooting at an elementary school in Uvalde, Texas, as he speaks during a press briefing at the White House, Tuesday, June 7, 2022, in Washington. (Photo by Evan Vucci/AP Photo) 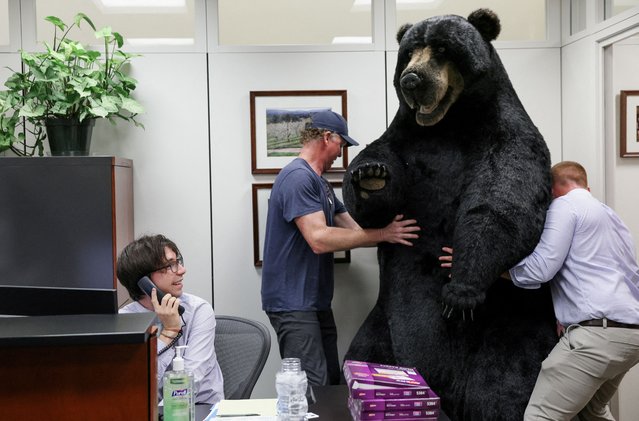 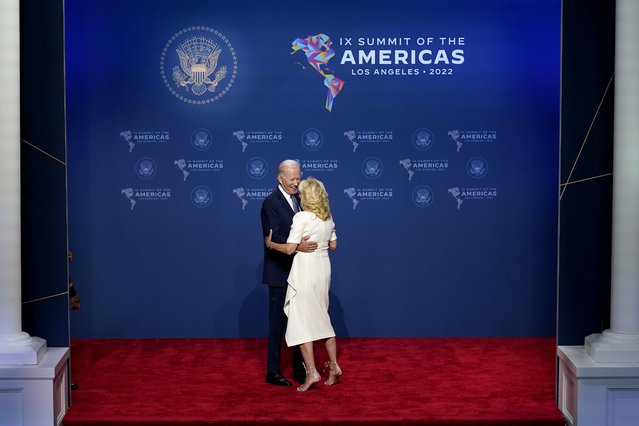 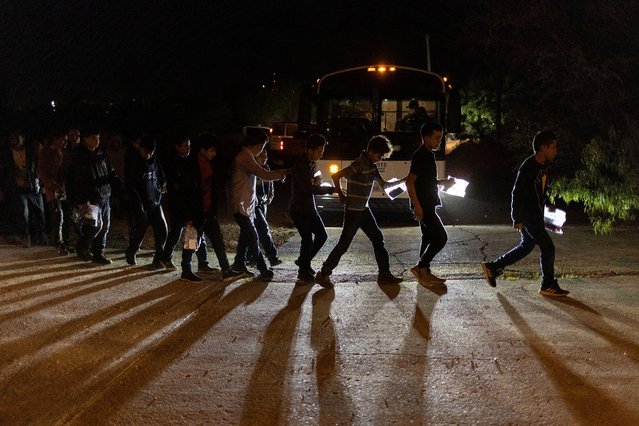 Central American migrant boys under 18 years of age prepare to board a Customs and Border Protection bus after crossing the Rio Grande river into the United States from Mexico in Roma, Texas, June 6, 2022. (Photo by Adrees Latif/Reuters) 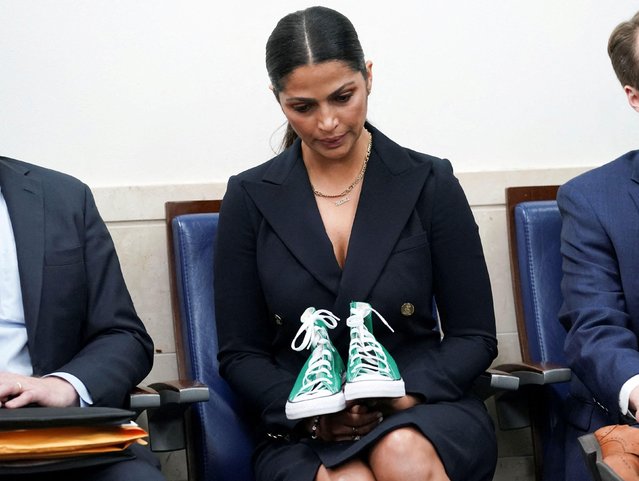 Camila Alves McConaughey, a model, designer and the wife of actor Matthew McConaughey, holds a pair of sneakers used to identify one of the student victims as her husband speaks to reporters about the recent mass shooting at an elementary school in his hometown of Uvalde, Texas during a press briefing at the White House in Washington, U.S., June 7, 2022. (Photo by Kevin Lamarque/Reuters) 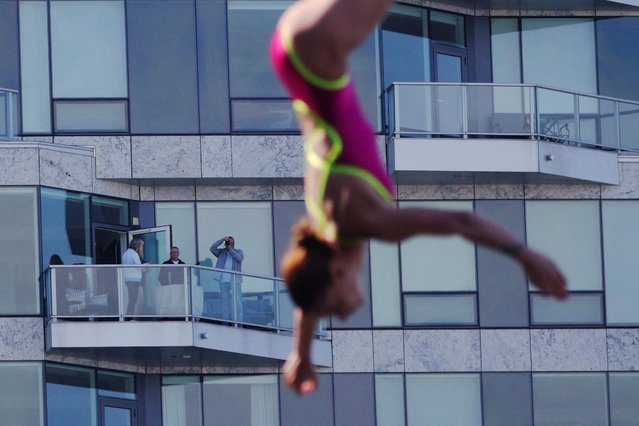 Spectators on the balcony of a residential building watch Antonina Vyshyvanova of Ukraine dive off the roof of the Institute of Contemporary Art while competing at the Red Bull Cliff Diving World Series in Boston, Massachusetts, U.S., June 3, 2022. (Photo by Brian Snyder/Reuters) 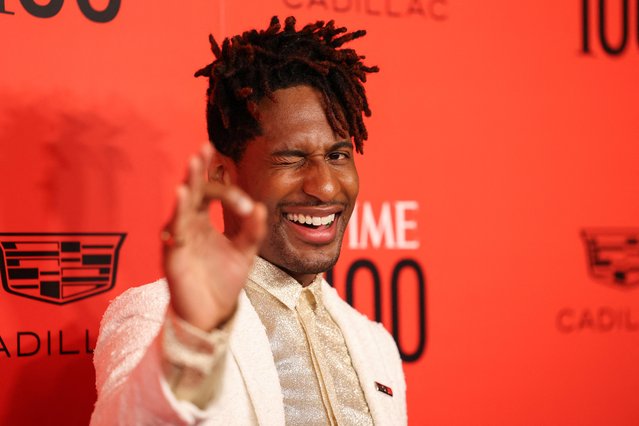 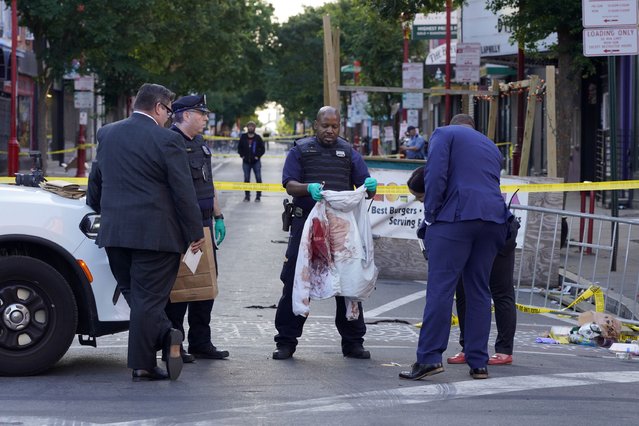 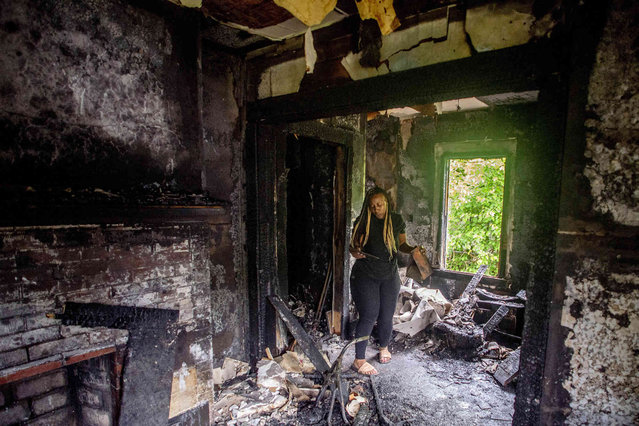 Resheema Whitner, of Flint, works with her cousins to recover precious family heirlooms after an early morning house fire killed 5 people, including three children, and hospitalized one child on Monday, June 6, 2022, in the 1600 block of Euclid Avenue in Flint, Mich. (Photo by Jake May/The Flint Journal via AP Photo) 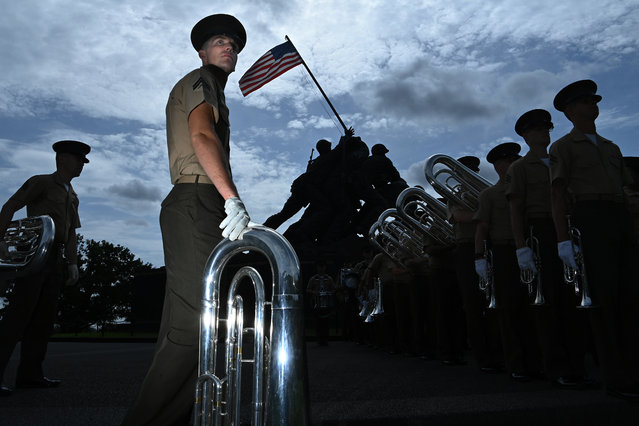 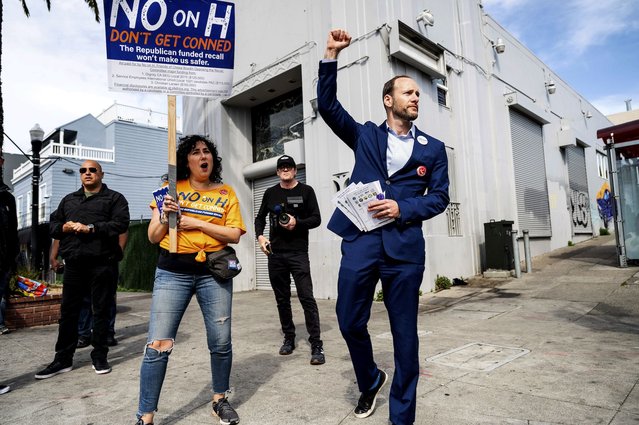 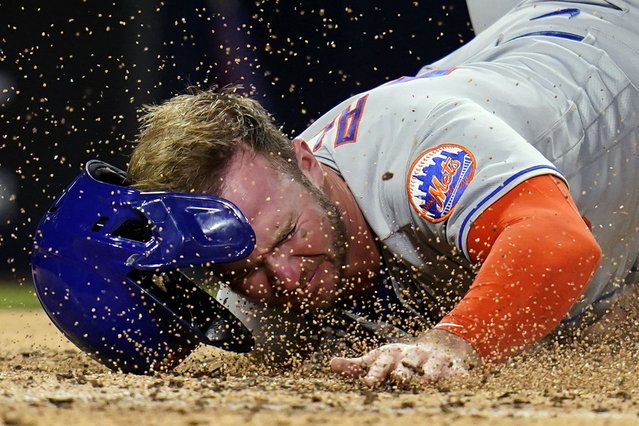 New York Mets' Pete Alonso slides into home, scoring off a sacrifice double play by J.D. Davis during the fifth inning of a baseball game against the San Diego Padres, Monday, June 6, 2022, in San Diego. (Photo by Gregory Bull/AP Photo) 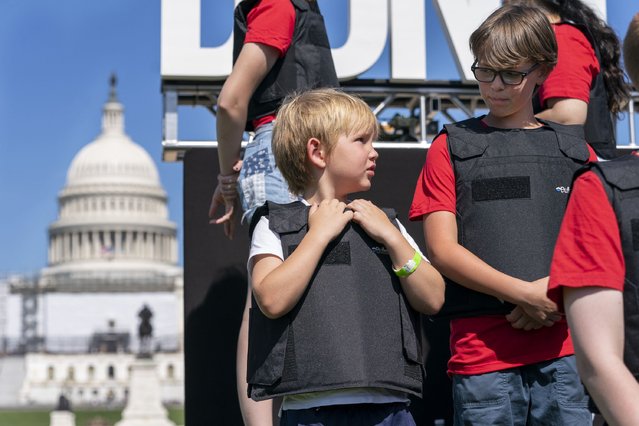 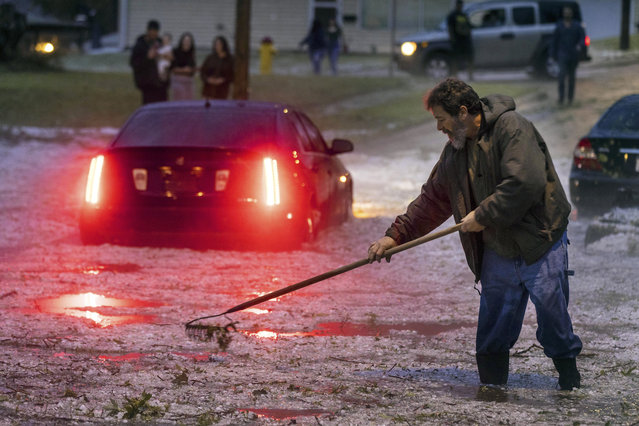 Rick Trapani clears out a storm drain after a car got stuck in floodwaters near 40th and Valley Streets in Omaha, Neb., Tuesday, June 7, 2022. Rain and hail from a storm pelted the area. (Photo by Chris Machian/Omaha World-Herald via AP Photo) 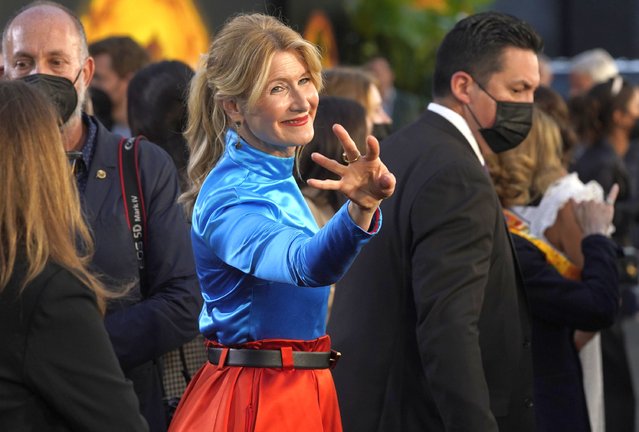 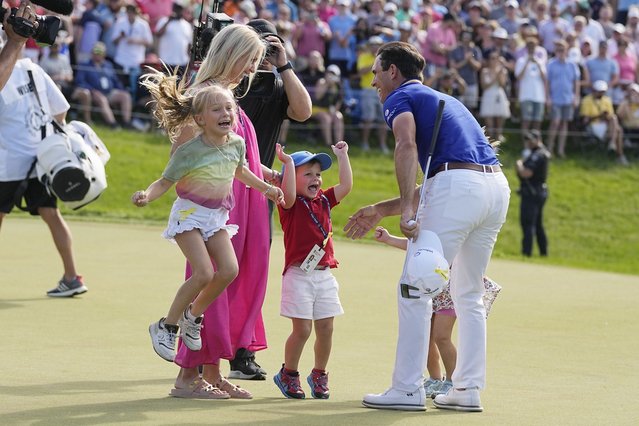 Billy Horschel celebrates with his family on the 18th green after winning the Memorial golf tournament Sunday, June 5, 2022, in Dublin, Ohio. (Photo by Darron Cummings/AP Photo) 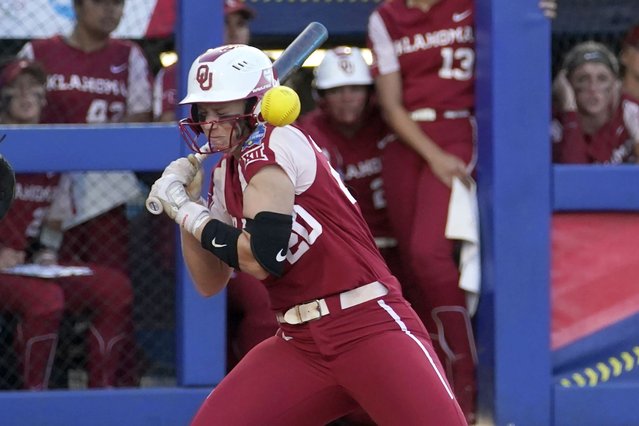 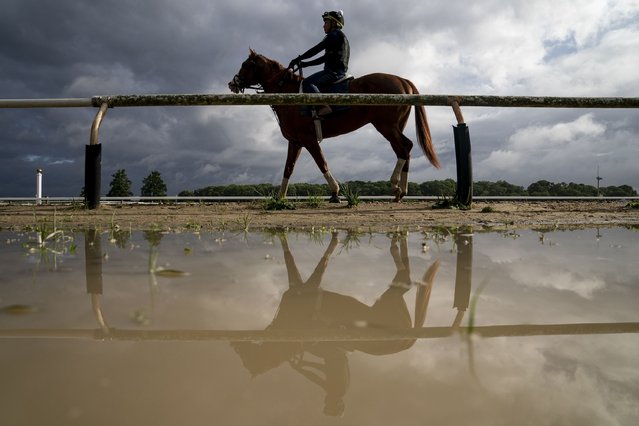 A rider walks their horse along a muddy track during training before the 154th running of the Belmont Stakes horse race, Thursday, June 9, 2022, in Elmont, N.Y. (Photo by John Minchillo/AP Photo) 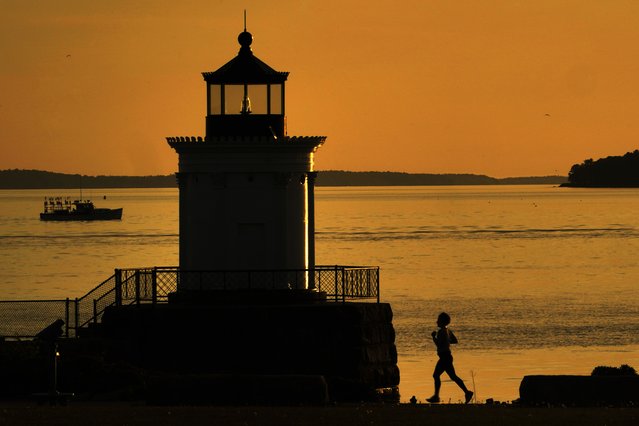 A jogger runs towards Bug Light while a lobster boat heads out of Portland Harbor under calm conditions, Tuesday morning. June 7, 2022, in South Portland, Maine. Southern Maine can expect a soaking rain on Wednesday. (Photo by Robert F. Bukaty/AP Photo) 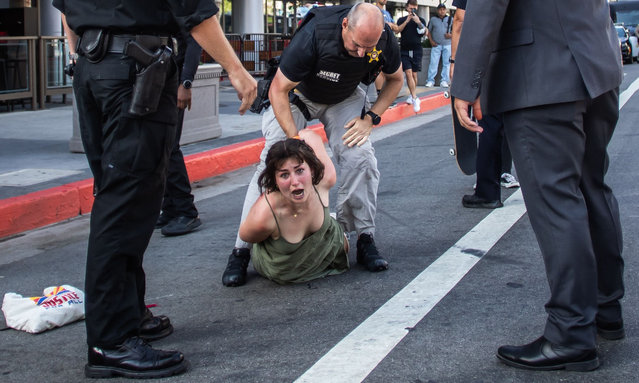 A Secret Service police officer wrestles a protester to the ground after she ran towards a motorcade on its way to the LA Convention Center where North and South American leaders are gathered for the ninth Summit of the Americas in Los Angeles, June 8, 2022. (Photo by Apu Gomes/AFP Photo)
Edit Del
15 Jun 2022 04:18:00, post received 0 comments
Publication archive:
←   →
Popular tags:
All tags
Last searches: