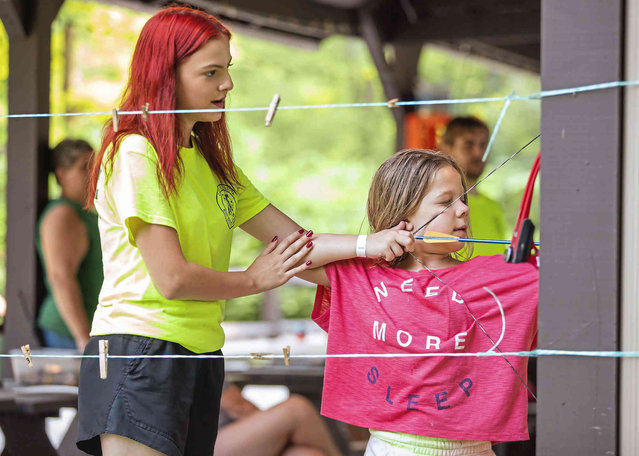 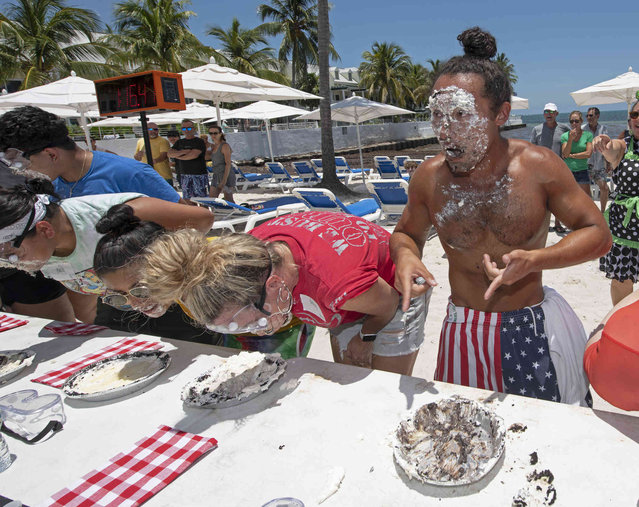 In this photo provided by the Florida Keys News Bureau, Nicholas Luera, right, points to an empty pie pan after winning the World Key Lime Pie Eating Championship Sunday, July 4, 2021, in Key West, Fla. Luera, a Seattle resident, consumed a 9-inch pie in two minutes, 13.5 seconds. The eating competition has become a July 4th tradition in the Florida Keys and is the island chain's answer to New York City's hotdog-eating contest. The contest and other July 4th events are occurring despite a tropical storm warning in place for most of the Keys because of Tropical Storm Elsa. Weather forecasters say that Elsa's tropical storm-force winds are not likely to begin affecting the Keys until late Monday afternoon. Officials are not planning visitor or resident evacuations. (Photo by Rob O'Neal/Florida Keys News Bureau via AP Photo) 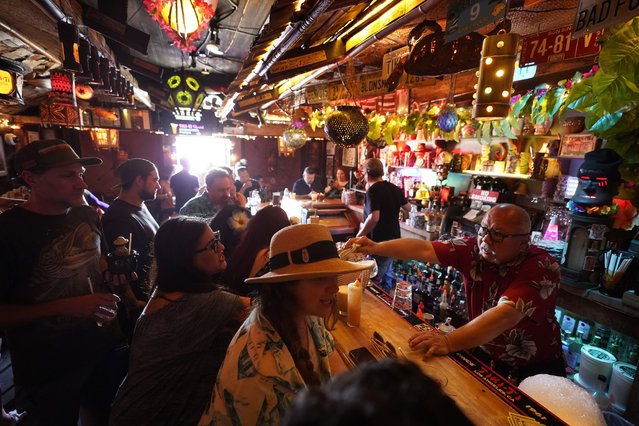 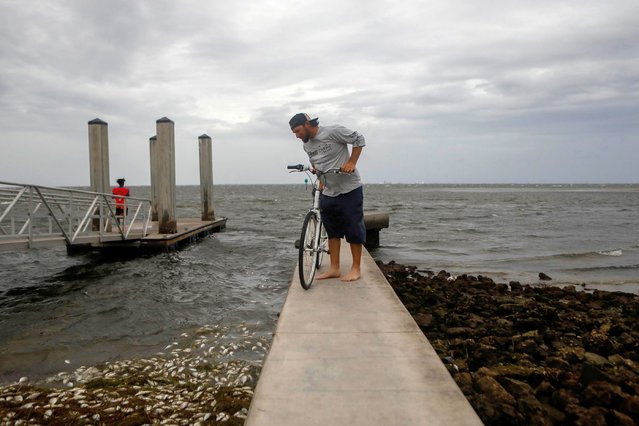 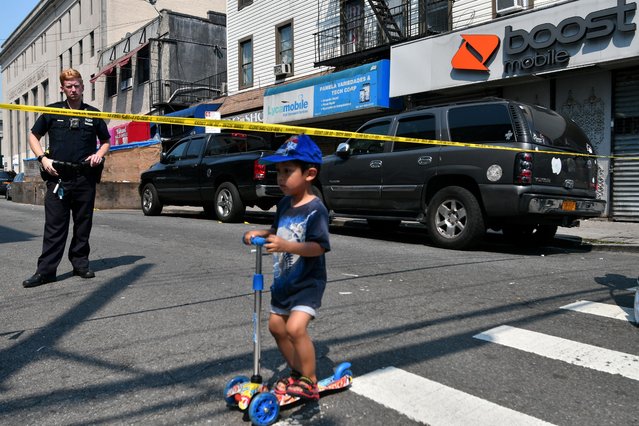 A child looks at an evidence marker near the scene of a shooting in the borough of Queens, New York, N.Y., U.S., July 6, 2021. (Photo by Lloyd Mitchell/Reuters) 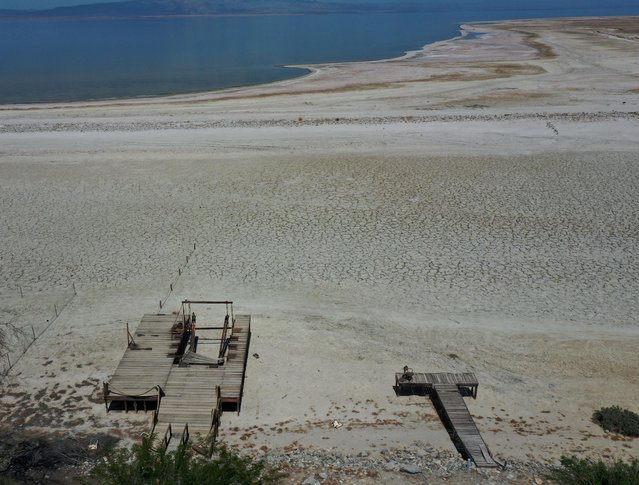 An aerial view shows former boat launches on a Salton Sea’s beach, with the water much further away, as California faces its worst drought since 1977, in Salton City, California, U.S., July 4, 2021. (Photo by Aude Guerrucci/Reuters) 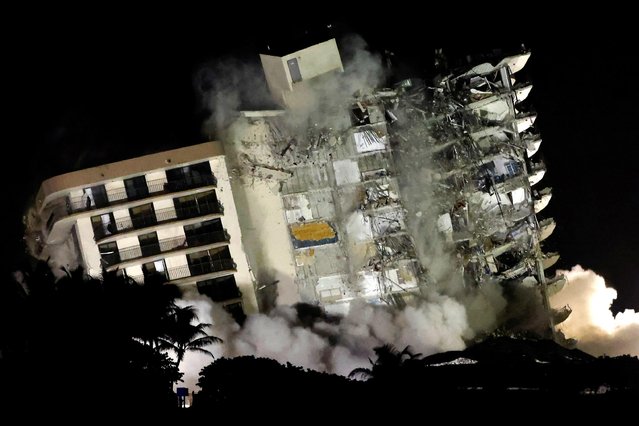 The partially collapsed Champlain Towers South residential building is demolished amid worries that high winds from Tropical Storm Elsa could knock it down, in Surfside, Florida, July 4, 2021. Days later, officials called off the search for survivors, saying there was no longer any hope of pulling someone alive from the ruins of the flattened building. (Photo by Marco Bello/Reuters) 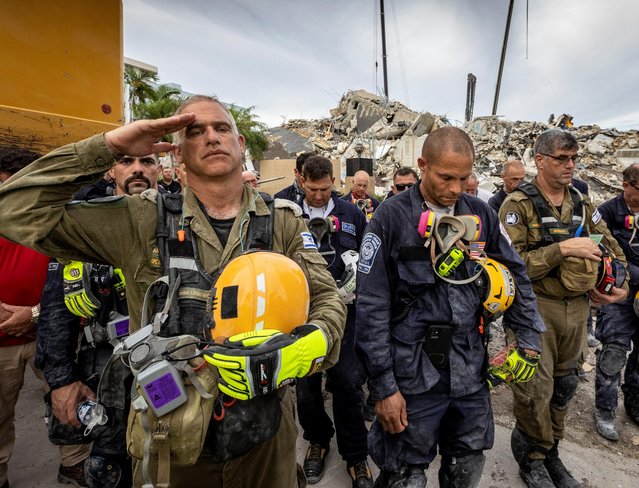 A member of the Israeli search and rescue team (left) salutes in front of the rubble that once was Champlain Towers South during a prayer ceremony and a moment of silence in Surfside, Florida, July 7, 2021. South Florida officials on Wednesday called off the search for survivors of a June condominium tower collapse, saying there was no longer any hope of pulling someone alive from the ruins of the flattened building. (Photo by Jose A. Iglesias/Pool via Reuters) 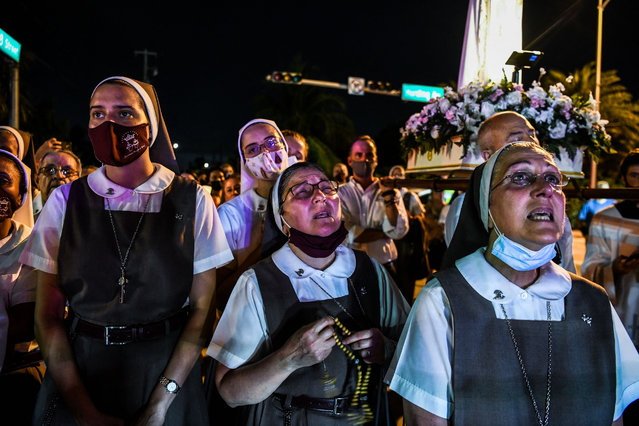 Nuns from the St. Joseph’s Catholic Church pray at the “Surfside Wall of Hope & Memorial” near the site of the collapsed building in Surfside, Florida, north of Miami Beach, on July 7, 2021. Florida rescuers have made the “extremely difficult decision” to end their search for survivors in the rubble of an apartment building which partially collapsed nearly two weeks ago, Miami-Dade county mayor Daniella Levine Cava said July 7. “It is with deep profound sadness . that we made the extremely difficult decision to transition from operation search and rescue to recovery”, Levine Cava told reporters in Surfside, near Miami, adding that the transition would formally take place at midnight. (Photo by Chandan Khanna/AFP Photo) 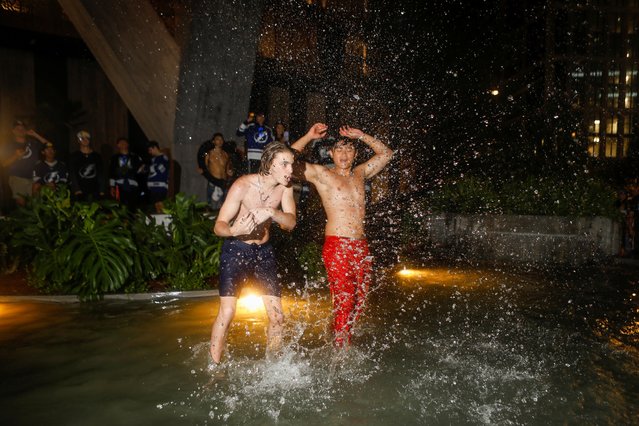 Fans stand in a fountain as they celebrate after the Tampa Bay Lightning ice hockey team won the NHL Stanley Cup Finals over the Montreal Canadiens, in Tampa, Florida, U.S. July 7, 2021. (Photo by Octavio Jones/Reuters) 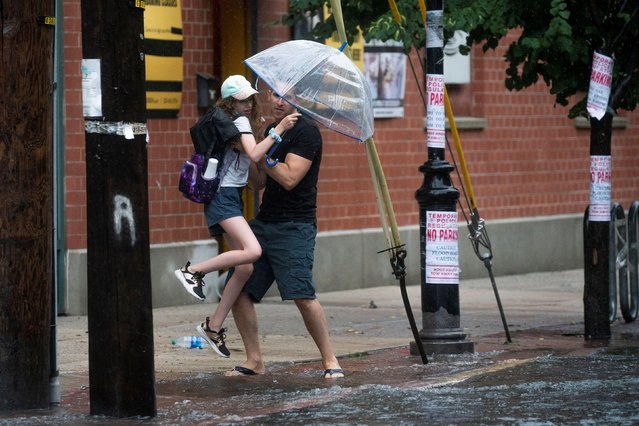 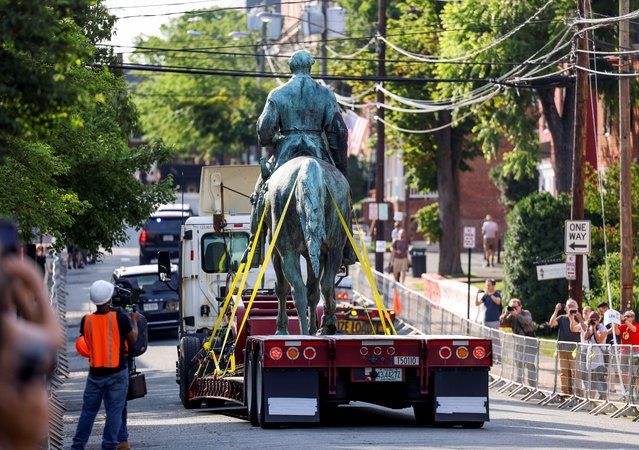 A statue of Confederate General Robert E. Lee is removed after years of legal battle over the monument, in Charlottesville, Virginia, July 10, 2021. Statues of Confederate Generals Robert E. Lee and Thomas “Stonewall” Jackson were taken down in Charlottesville, Virginia, nearly four years after white supremacist protests over plans to remove it led to clashes in which a woman was run down by a driver and killed. (Photo by Evelyn Hockstein/Reuters) 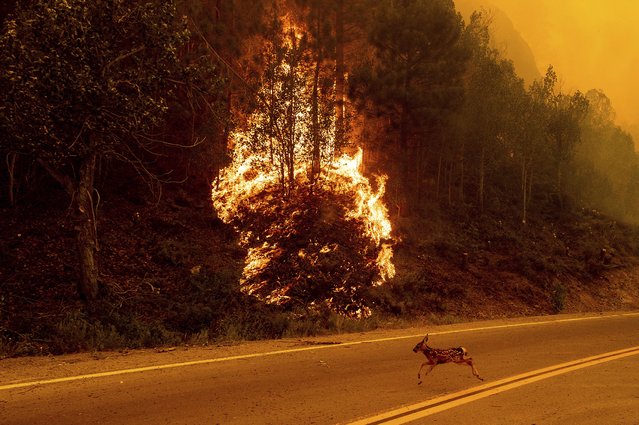 An animal sprints across a road as the Sugar Fire, part of the Beckwourth Complex Fire, burns in Plumas National Forest, Calif., on Thursday, July 8, 2021. (Photo by Noah Berger/AP Photo) 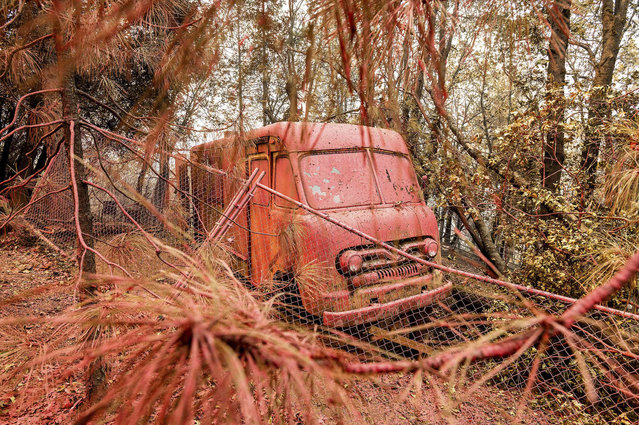 Fire retardant coats a vehicle in the Lakehead-Lakeshore community of unincorporated Shasta County, Calif., as the Salt Fire burns nearby on Friday, July 2, 2021. (Photo by Noah Berger/AP Photo) 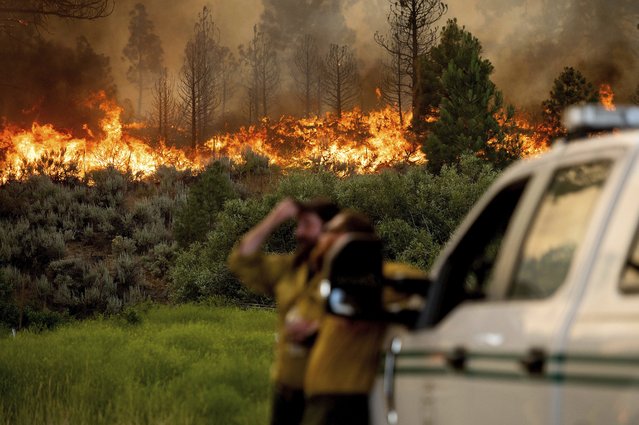 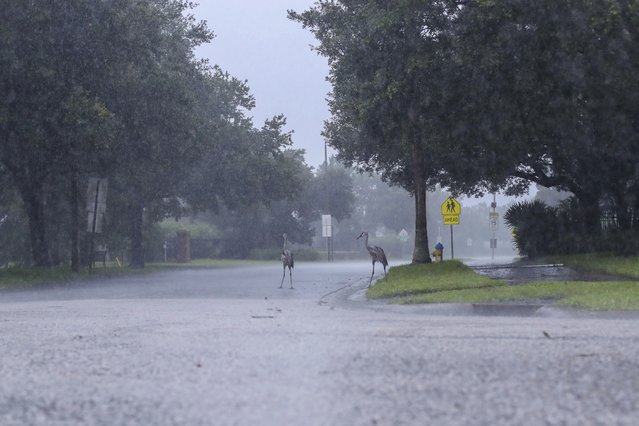 Cranes cross the road during a rainstorm from Tropical Storm Elsa, Wednesday, July 7, 2021 in Westchase, Fla. The Tampa Bay area was spared major damage as Elsa stayed off shore as it passed by. (Photo by Arielle Bader/Tampa Bay Times via AP Photo) 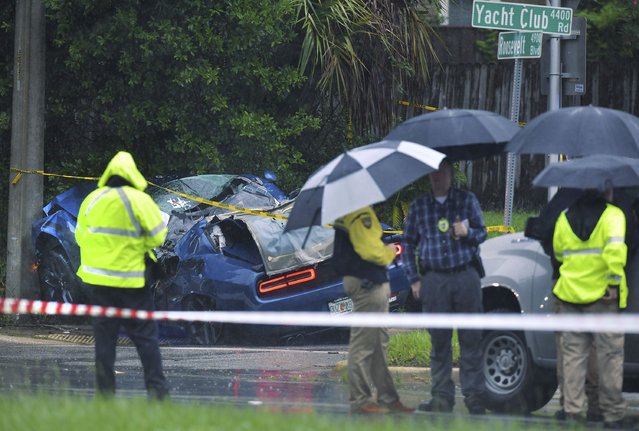 Law enforcement investigators stand on the scene of a fatal car crash on Roosevelt Blvd. in the Ortega neighborhood of Jacksonville, Fla. during the strong winds from Tropical Storm Elsa, Wednesday, July 7, 2021. (Photo by Bob Self/The Florida Times-Union via AP Photo) 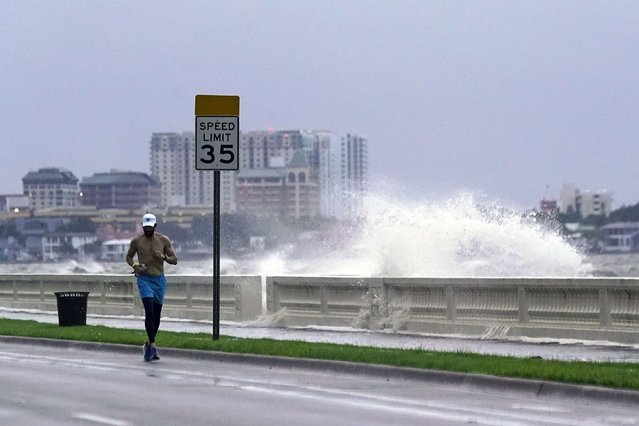 A jogger makes his way along Bayshore Blvd., in Tampa, Fla. as a wave breaks over a seawall, during the aftermath of Tropical Storm Elsa Wednesday, July 7, 2021. (Photo by John Raoux/AP Photo) 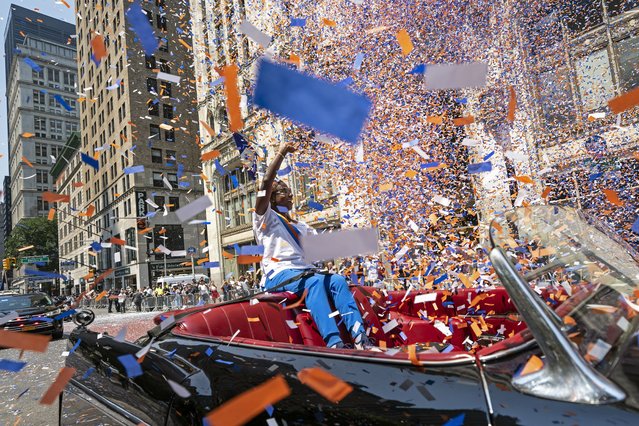 Grand marshal Sandra Lindsay, a health care worker who was the first person in the country to get a COVID-19 vaccine shot, waves to spectators as she leads marchers through the Financial District as confetti falls during a parade honoring essential workers for their efforts in getting New York City through the COVID-19 pandemic, Wednesday, July 7, 2021, in New York. The parade kicked off at Battery Park and travel up Broadway in lower Manhattan, the iconic stretch known as the Canyon of Heroes, which has hosted parades honoring world leaders, celebrities and winning sports teams. (Photo by John Minchillo/AP Photo) 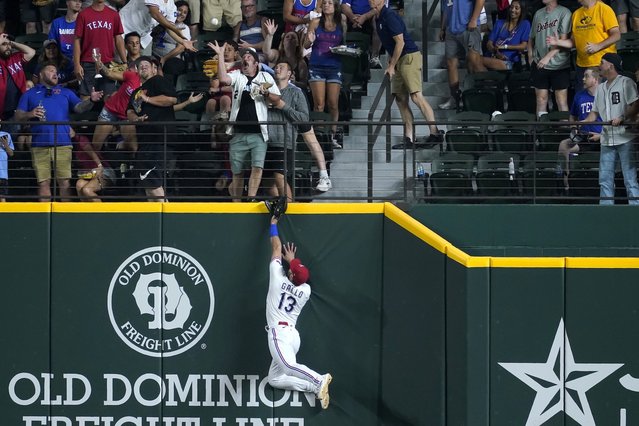