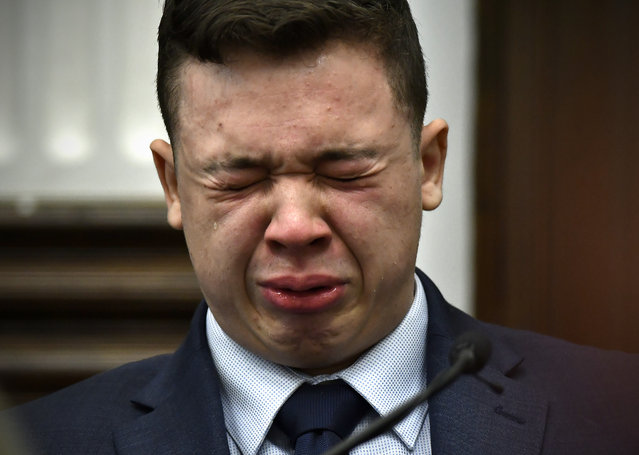 Kyle Rittenhouse breaks down on the stand as he testifies about his encounter with the late Joseph Rosenbaum during his trial at the Kenosha County Courthouse in Kenosha, Wis., on Wednesday, November 10, 2021. Rittenhouse is accused of killing two people and wounding a third during a protest over police brutality in Kenosha, last year. (Photo by Sean Krajacic/The Kenosha News via AP Photo, Pool) 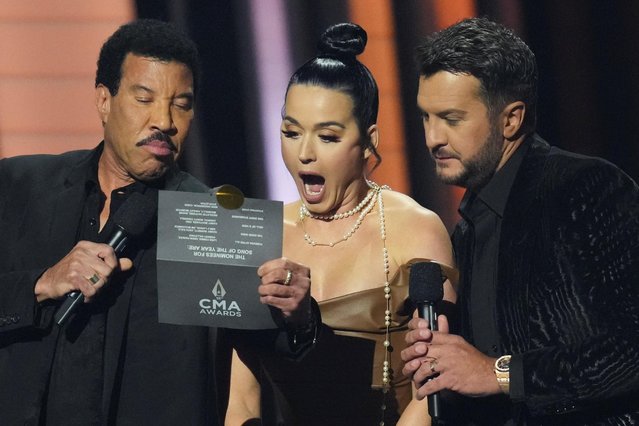 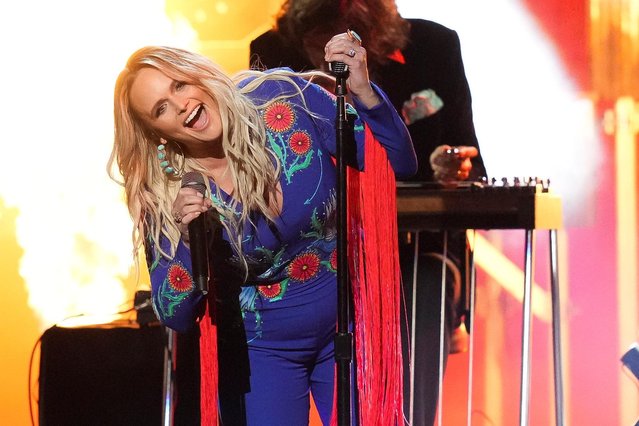 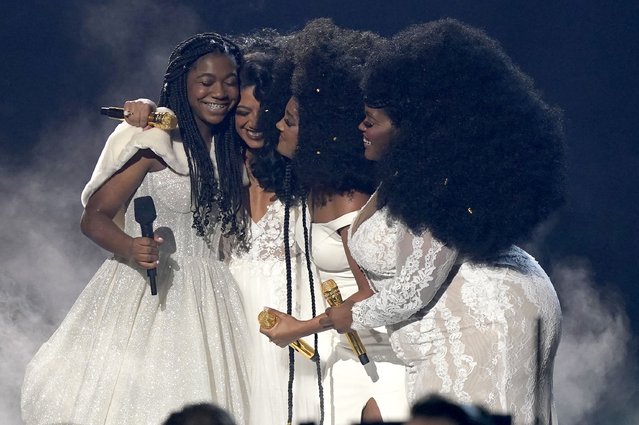 Faith Fennidy, from left, Madeline Edwards, Mickey Guyton, and Brittney Spencer embrace after a performance at the 55th annual CMA Awards on Wednesday, November 10, 2021, at the Bridgestone Arena in Nashville, Tenn. (Photo by Mark Humphrey/AP Photo) 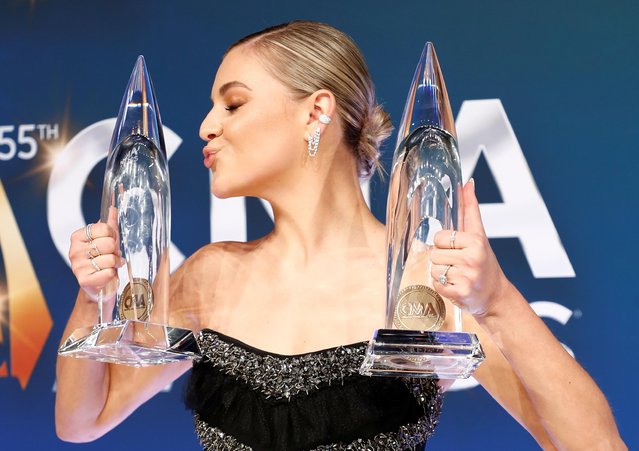 Kelsea Ballerini, winner for Musical Event of the Year and winner for Music Video of the Year poses with her awards for the 55th annual Country Music Association awards at the Bridgestone Arena on November 10, 2021 in Nashville, Tennessee. (Photo by Harrison McClary/Reuters) 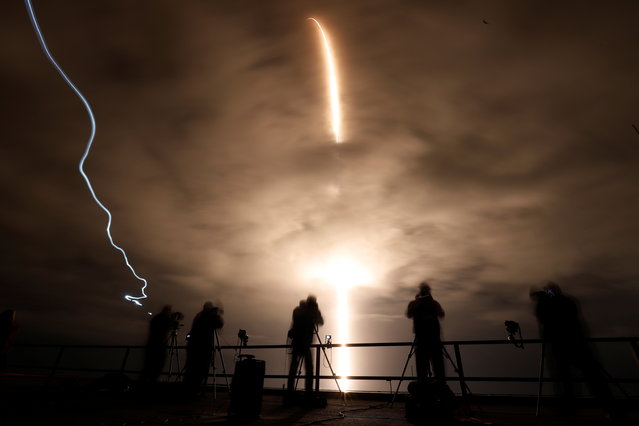 A long exposure shows a SpaceX Falcon 9 rocket, with the Crew Dragon capsule, as it is launched carrying three NASA and one ESA astronauts on a mission to the International Space Station at the Kennedy Space Center in Cape Canaveral, Florida, U.S. November 10, 2021. (Photo by Thom Baur/Reuters) 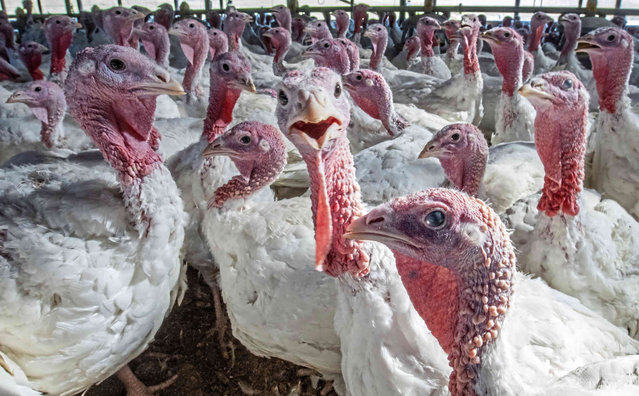 Turkeys stand in a finishing barn at Pounds' Turkey Farm on Tuesday, November 9, 2021, in Allegheny Township, Pa., in Westmoreland County. The farm, run by Rick and Tim Pounds, raised 7000 turkeys this year and all of them are claimed for this Thanksgiving. (Photo by Andrew Rush/Pittsburgh Post-Gazette via AP Photo) 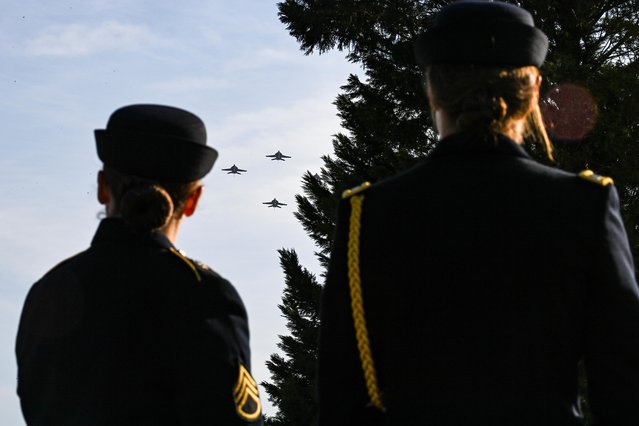 A joint service flyover honoring the centennial anniversary of the Tomb of the Unknown Soldier takes place at Arlington National Cemetery on Veterans Day, in Arlington, Virginia, on November 11, 2021. (Photo by Kenny Holston/Pool via AFP Photo) 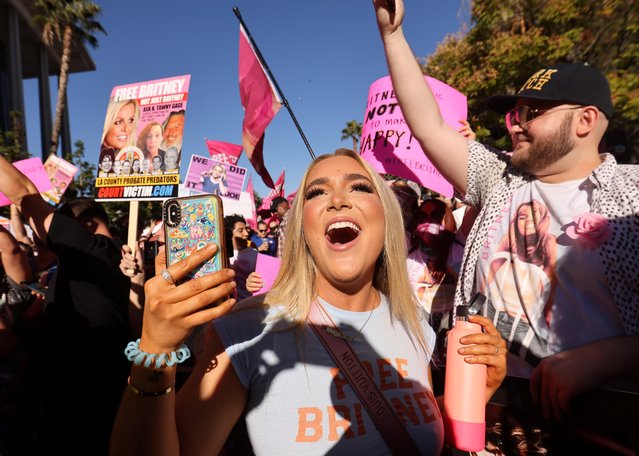 Supporters of singer Britney Spears celebrate as Spears' conservatorship is terminated, outside the Stanley Mosk Courthouse on the day of her conservatorship case hearing, in Los Angeles, California, U.S. November 12, 2021. (Photo by Mike Blake/Reuters) 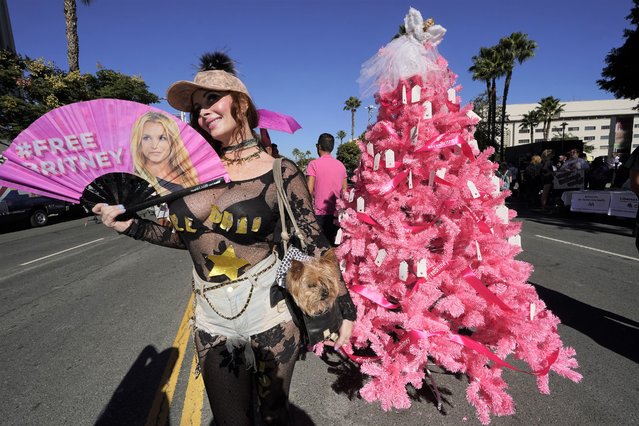 Britney Spears supporter Phoebe Price and her dog Henry take pictures next to a “Free Britney” Christmas tree set by fans outside a hearing concerning the pop singer's conservatorship at the Stanley Mosk Courthouse, Friday, November 12, 2021, in Los Angeles. A Los Angeles judge ended the conservatorship that has controlled Spears' life and money for nearly 14 years. (Photo by Damian Dovarganes/AP Photo) 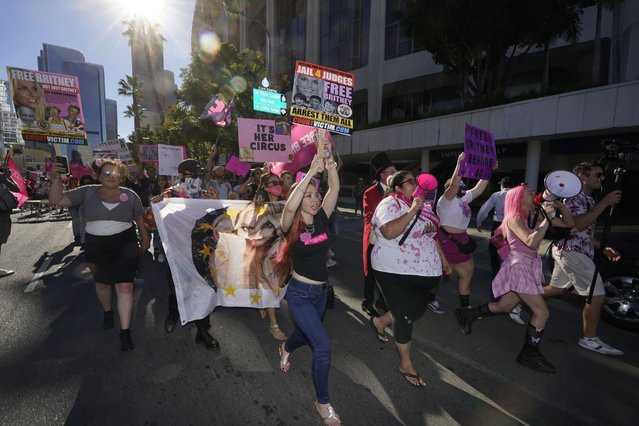 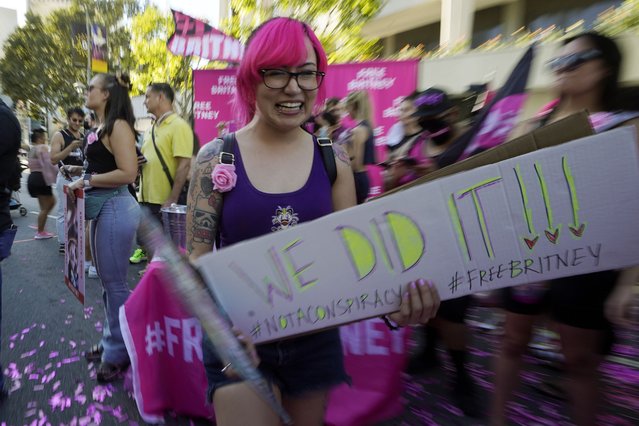 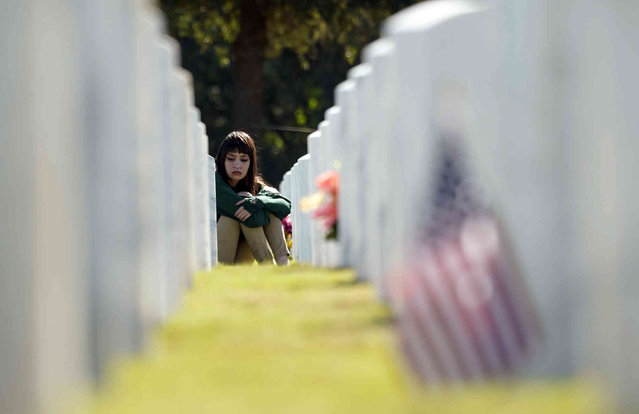 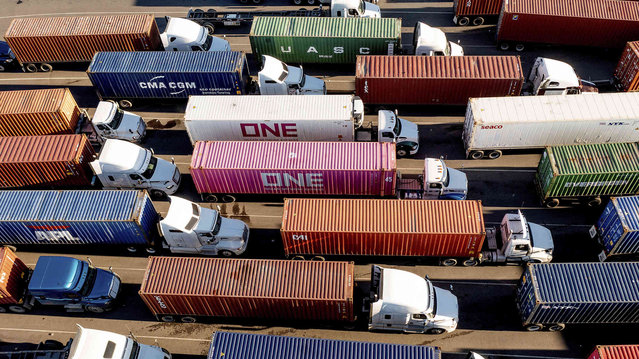 Trucks line up to enter a Port of Oakland shipping terminal on Wednesday, November 10, 2021, in Oakland, Calif. Intense demand for products has led to a backlog of container ships outside the nation's two largest ports along the Southern California coast. (Photo by Noah Berger/AP Photo) 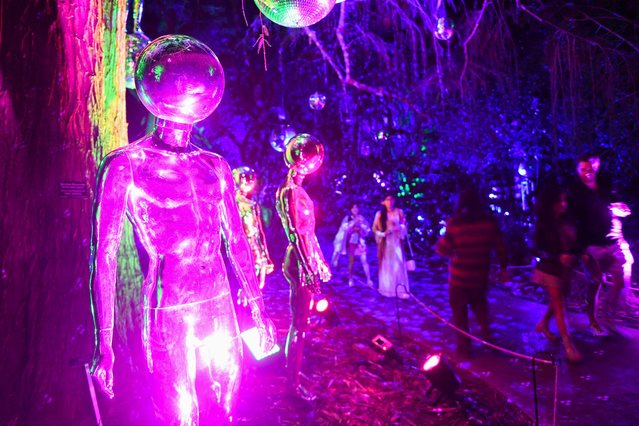 People walk through the Disko Tannsi area while visiting “Lightscape”, a light display at the Los Angeles County Arboretum and Botanic Garden on November 11, 2021 in Arcadia, California. The mile long pathway though The Arboretum features art installations of light, color, and sound immersed in the gardens. (Photo by Patrick T. Fallon/AFP Photo) 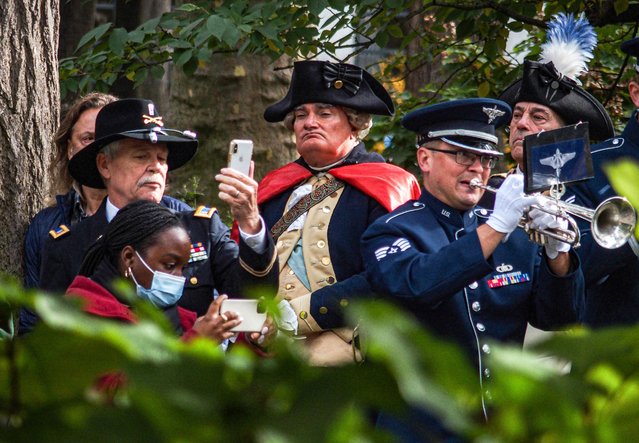 The 102nd New York City Veterans Day Parade commenced again after two year hiatus on November 11, 2021. Veterans Day celebrates and honors all the brave men and women, both the living and the dead who have fought for the country and in the armed services..This year also commemorates the 20th anniversary of 9/11 as well as the 30th anniversary of Operation Desert Storm..Banding together, everyone came out with loved and remembered ones and march down 5th AVE in Manhattan between 25th Street and 40th Street. (Photo by Bianca Otero/ZUMA Press Wire/Rex Features/Shutterstock) 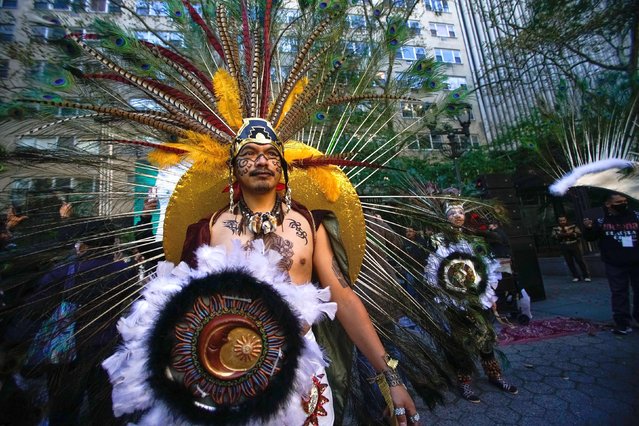 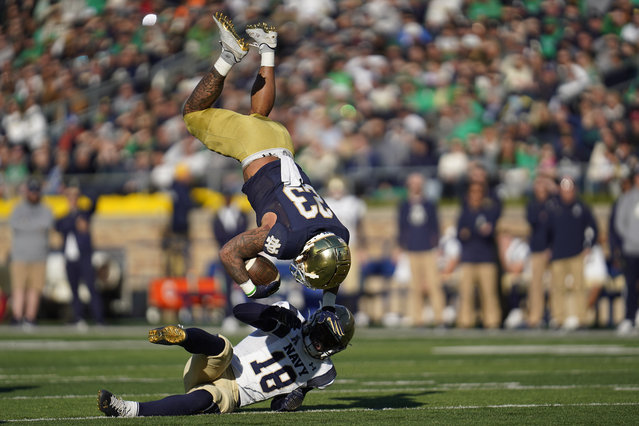 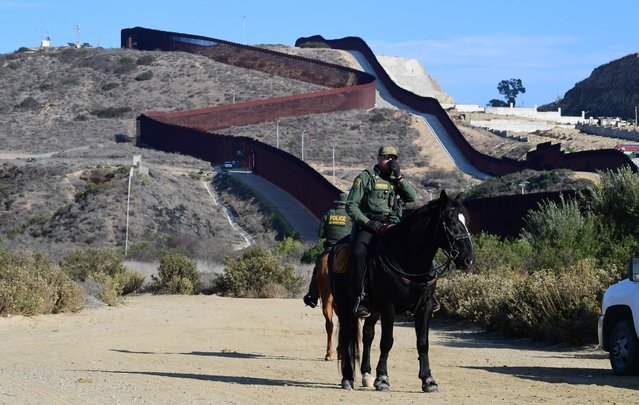 US Border Patrol police on horseback monitor the US-Mexico border fence which runs into the Pacific Ocean near Friendship Park in Imperial Beach, California on November 7, 2021, a day before the nearly 2,000 mile US-Mexico border reopens after 20 months of Covid-19 shutdown. (Photo by Frederic J. Brown/AFP Photo) 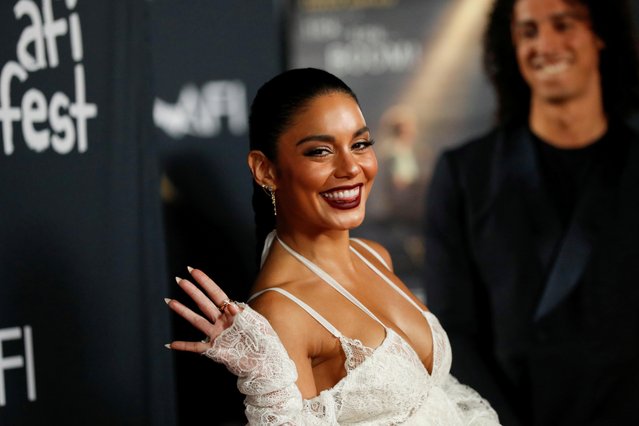