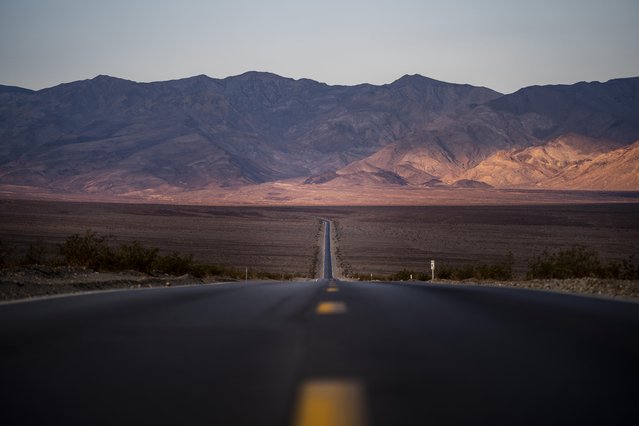 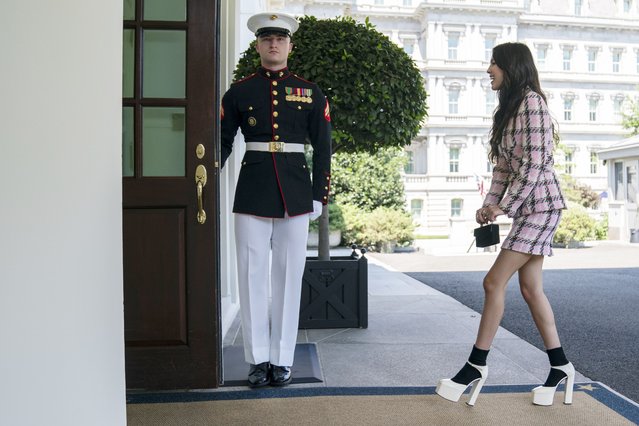 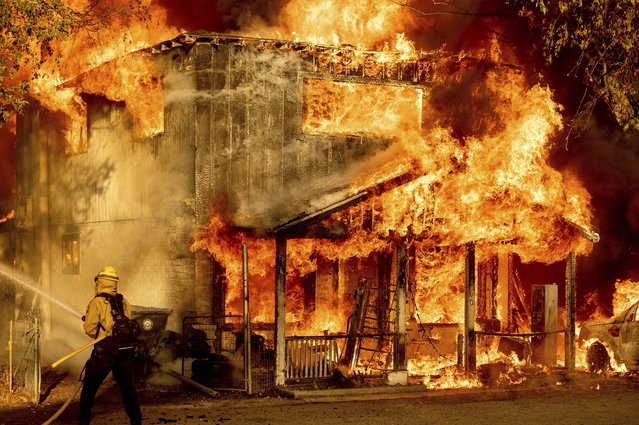 A firefighter sprays water while trying to stop the Sugar Fire, part of the Beckwourth Complex Fire, from spreading to neighboring homes in Doyle, Calif., Saturday, July 10, 2021. Pushed by heavy winds amid a heat wave, the fire came out of the hills and destroyed multiple residences in central Doyle. (Photo by Noah Berger/AP Photo) 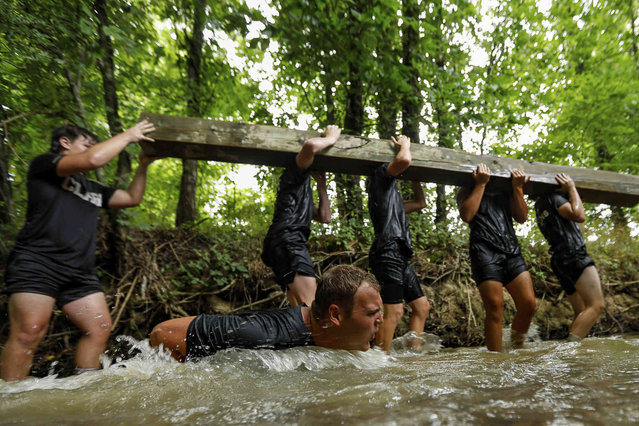 Heritage high school football player Dylan Hodges falls into a creek while he and his teammates lift a log during a voluntary faith based leadership training camp put on by the organization “I AM 4” in Ringgold, Ga., on Monday, July 12, 2021. The camp, which was lead by Air Force veteran IV Marsh and Army veteran Dan Durbin, who are both pastors, was meant to push the players who volunteered physically, mentally, and spiritually. (Photo by Troy Stolt/Chattanooga Times Free Press via AP Photo) 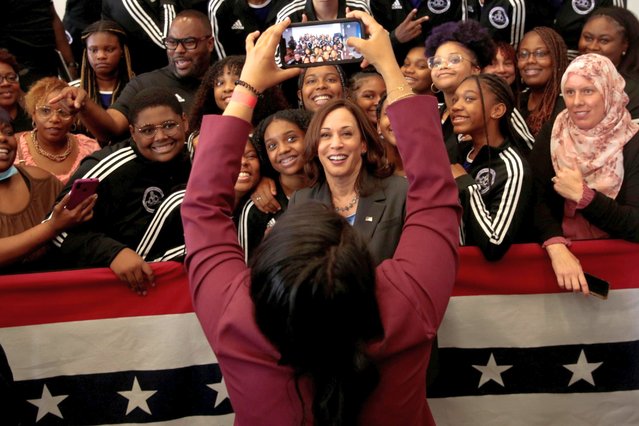 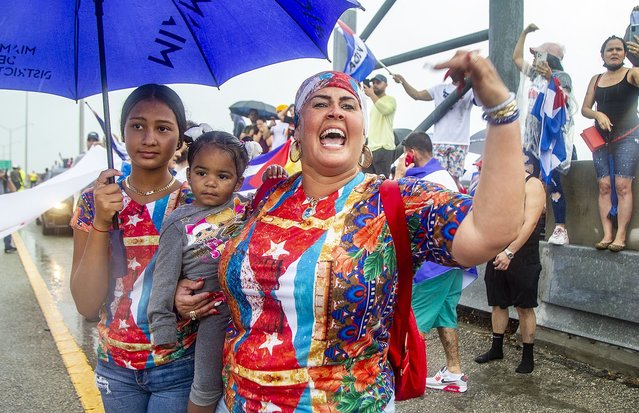 Monica Zerquera holds her daughter Khaily as her other daughter Melanie joins a group of Cuban exiles that blocked the Palmetto Expressway at Coral Way in support of protests in Cuba, Tuesday 13, 2021 in Miami. Demonstrators expressing solidarity with the thousands of Cubans who waged a rare weekend of protests around their island nation shut down a stretch of a major South Florida expressway Tuesday. (Photo by Pedro Portal/Miami Herald via AP Photo) 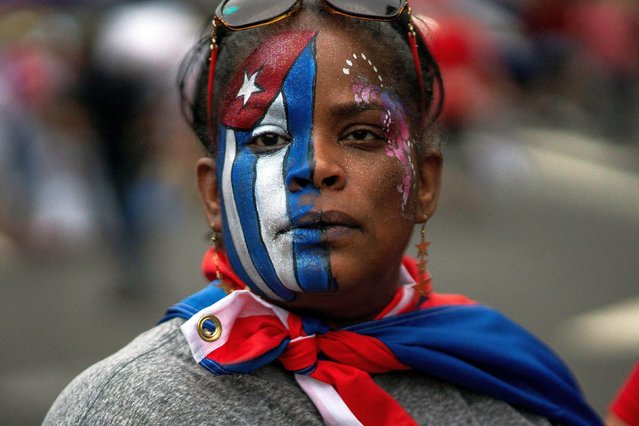 A member of an exiled Cuban community attends a march as the community reacts to reports of protests in Cuba against the deteriorating economy, in North Bergen, New Jersey, U.S., July 13, 2021. (Photo by Eduardo Munoz/Reuters) 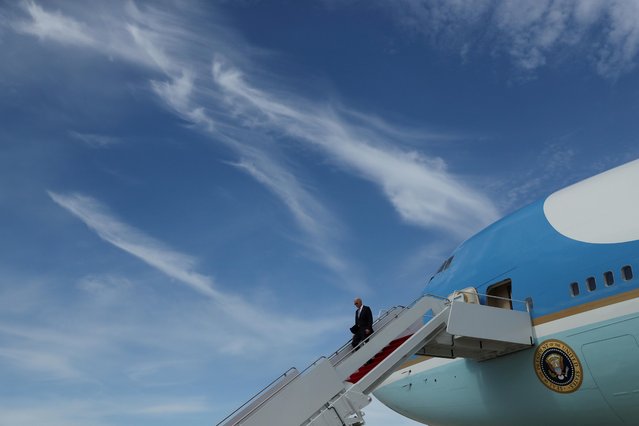 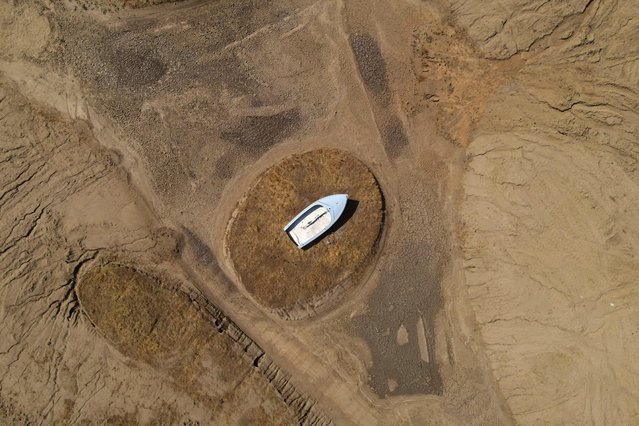 A lone boat sits perched on a mound near Hensley Lake as soaring temperatures and drought continue to affect livestock and water supplies in Madera, California, U.S. July 14, 2021. (Photo by David Swanson/Reuters) 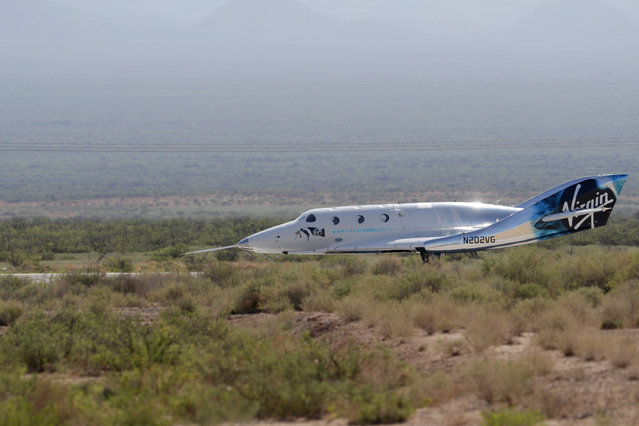 The Virgin Galactic rocket plane, with founder Richard Branson and other crew members on board, lands back in Spaceport America near Truth or Consequences, N.M., Sunday, July 11, 2021. (Photo by Andres Leighton/AP Photo) 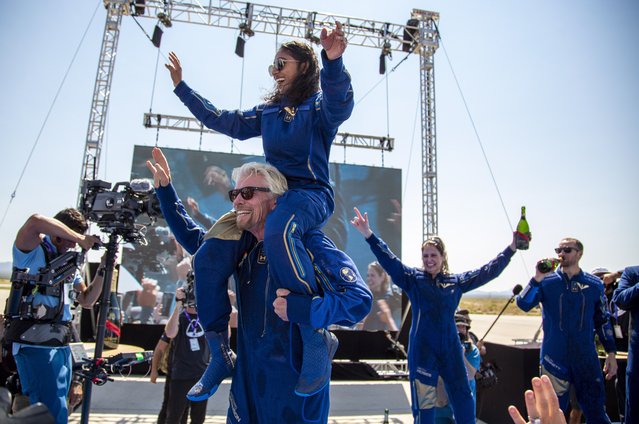 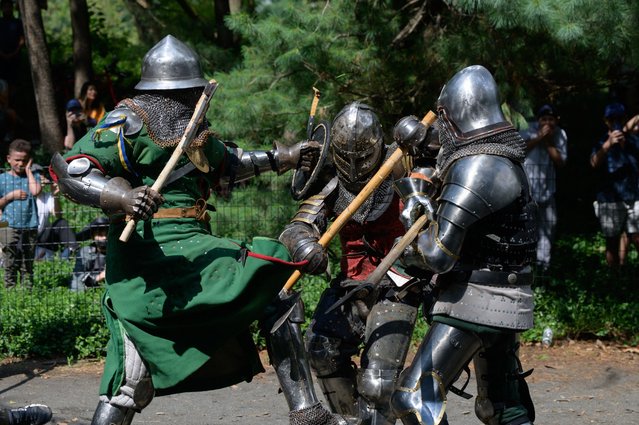 Members of the “Gladiators NYC” armored combat group fight in Central Park, New York on July 10, 2021. Once a month a bucolic corner of New York's Central Park becomes an impromptu battlefield as combatants in full medieval armour vie before baying picnickers and passersby, in a demonstration of brute strength and swordsmanship. (Photo by Ed Jones/AFP Photo) 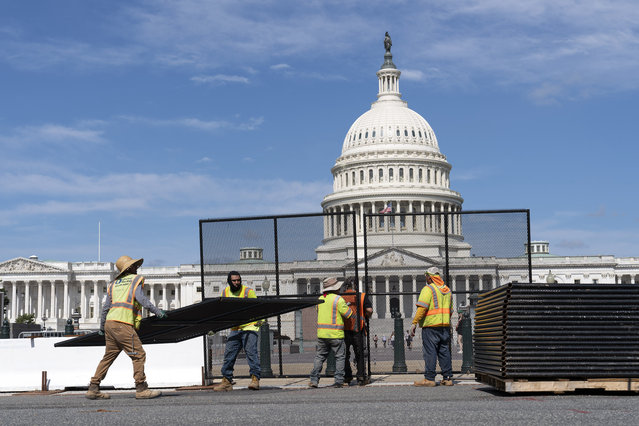 Workers remove the fence surrounding the U.S. Capitol building, six months after it was erected following the Jan. 6 riot at the Capitol, on Saturday, July 10, 2021, in Washington. (Photo by Jose Luis Magana/AP Photo) 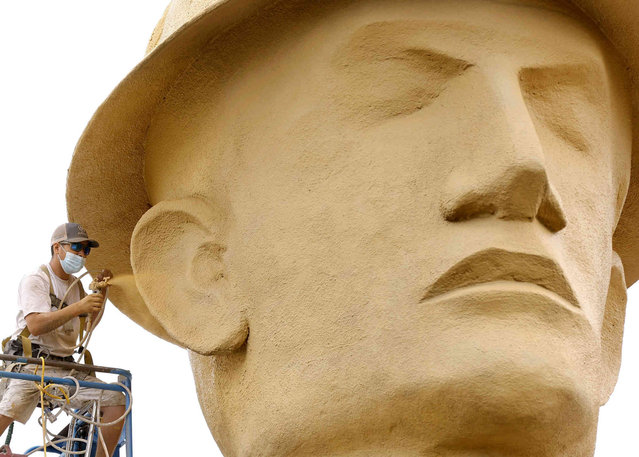 Workers apply a fresh coat of paint to the Golden Driller statue outside the River Spirit Expo center on the Tulsa County Fairgrounds in Tulsa, Okla., on Saturday, July 10, 2021. Bill Haynes, of Bill Haynes Co., said on Saturday that the driller statue would take 40-50 gallons of a custom gold paint and that his crews expected to have the work done by Monday. (Photo by John Clanton/Tulsa World via AP Photo) 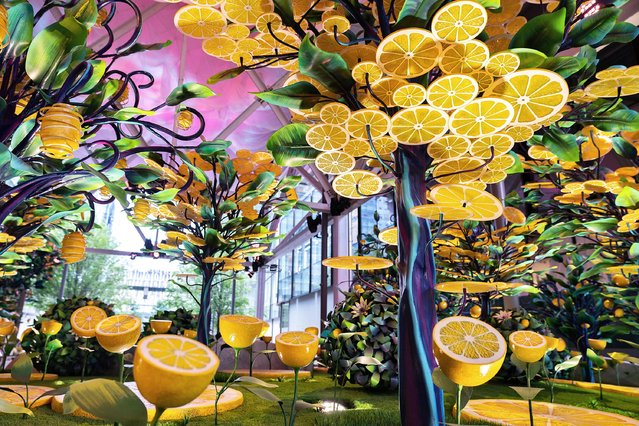 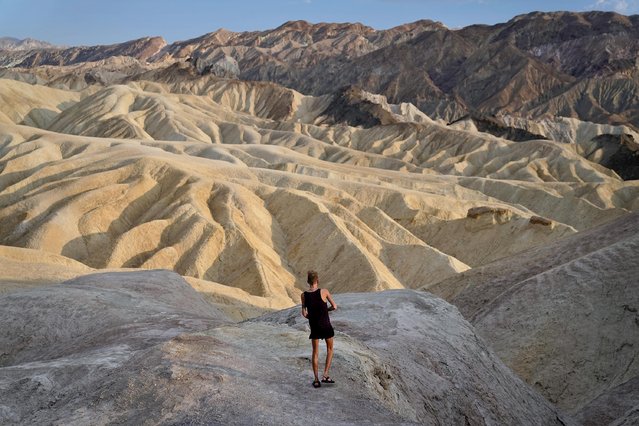 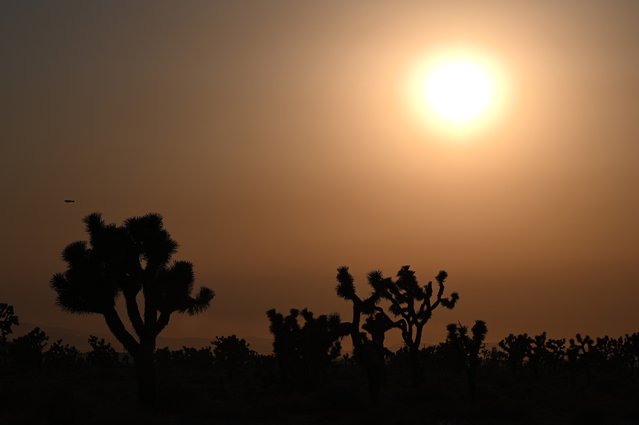 The sun sets behind Joshua Trees in Lancaster, California where temperatures reached 107 degrees Fahrenheit (41.6 degrees Celsius) today, July 12, 2021. Wildfires were burning across more than one million acres of the western United States and Canada on Monday, as scorching temperatures held their grip on areas reeling from a brutal weekend heat wave. (Photo by Robyn Beck/AFP Photo) 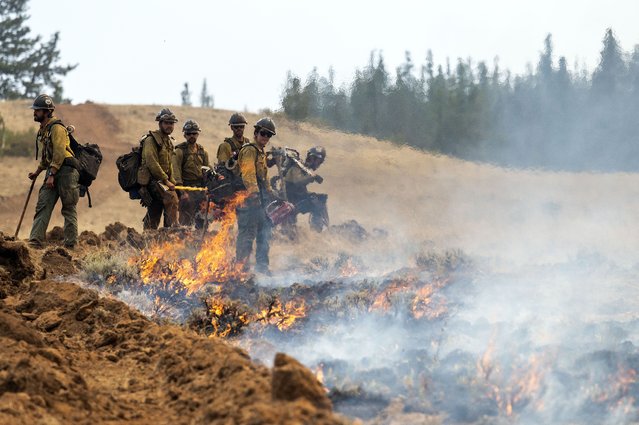 A wildland fire crew looks on after setting a fire line on Harlow Ridge above the Lick Creek Fire, Monday, July 12, 2021, south of Asotin, Wash. (Photo by Pete Caster/Lewiston Tribune via AP Photo) 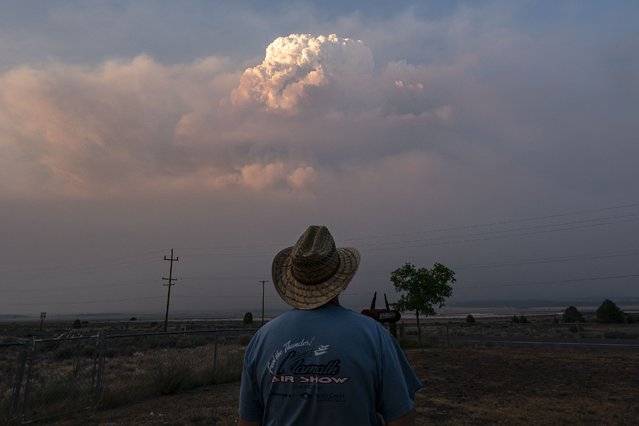 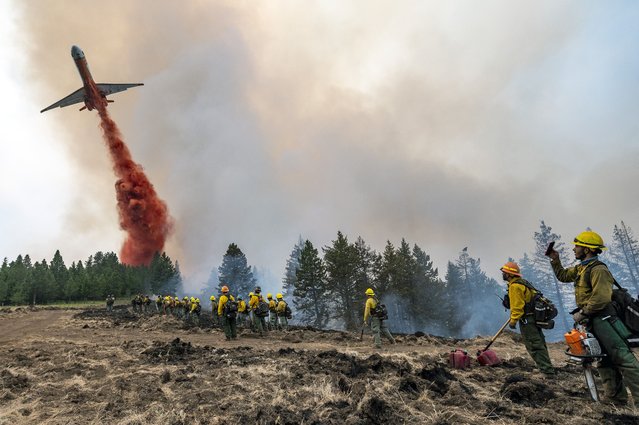