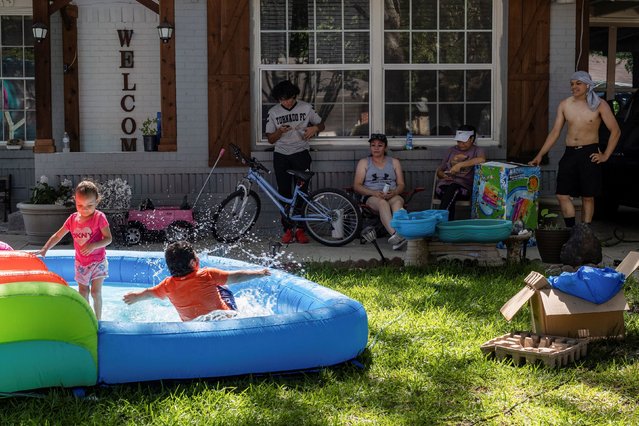 Neighbors Samuel Hernandez, Maria Hernandez, Luisa Ortega and Issac Montelongo sit outside as they watch the kids play in water during a heatwave with expected temperatures of 102 F (39 C) in Dallas, Texas, U.S. June 12, 2022. Though the heat wave caused electricity use in Texas to reach an all time high, the power grid remained largely stable without major issues. (Photo by Shelby Tauber/Reuters) 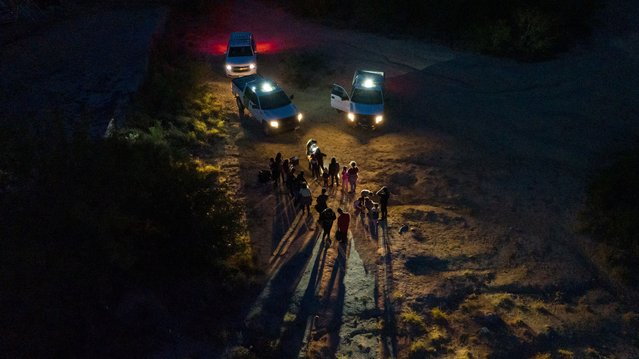 Asylum seeking migrants from Central and South America are registered by border patrol agents after they crossed the Rio Grande river into the United States from Mexico in Roma, Texas, U.S., June 13, 2022. (Photo by Adrees Latif/Reuters) 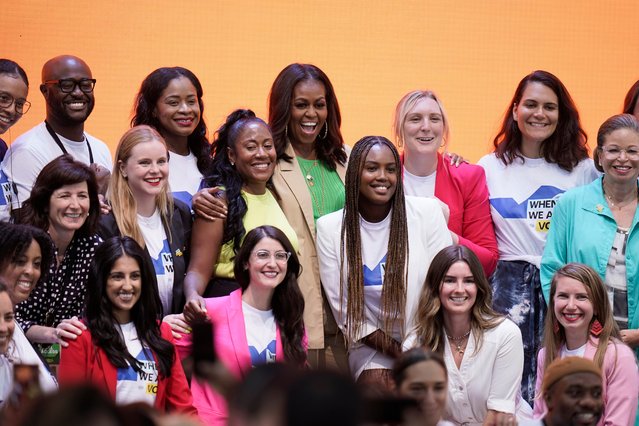 Former first lady Michelle Obama, center, takes pictures with When We All Vote staff members after her speech at the Culture of Democracy Summit in Los Angeles, Monday, June 13, 2022. (Photo by Jae C. Hong/AP Photo) 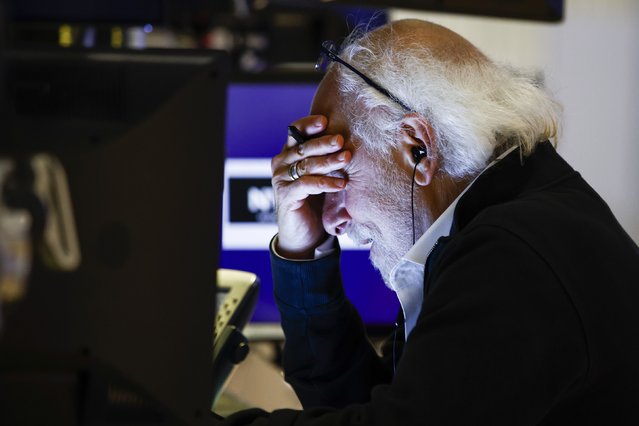 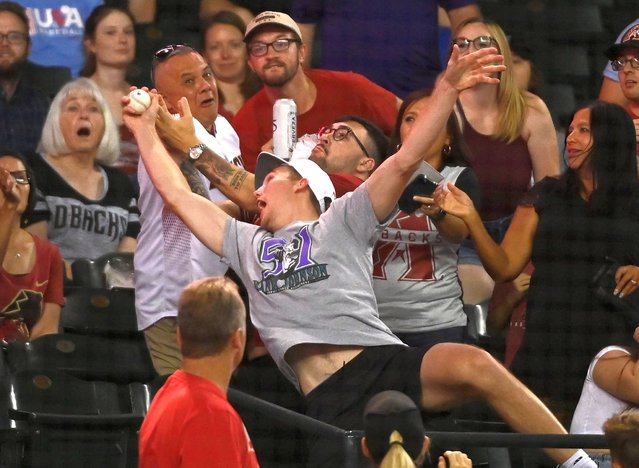 An Arizona Diamondbacks fan catches a foul ball during the seventh inning against the Cincinnati Reds at Chase Field on June 14, 2022 in Phoenix, Arizona. (Photo by Norm Hall/Getty Images) 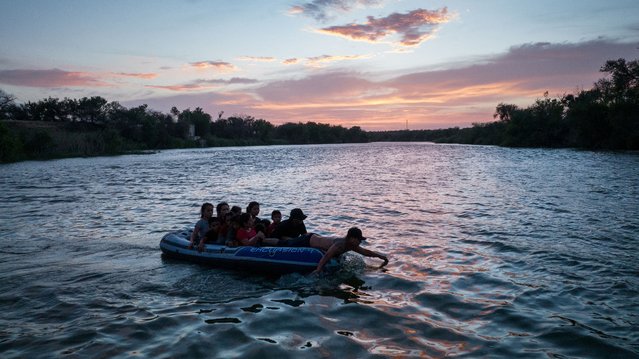 A smuggler uses his hands to paddle on a raft full of asylum seeking migrants from Central and South America across the Rio Grande river into the United States from Mexico in Roma, Texas, U.S., June 13, 2022. (Photo by Adrees Latif/Reuters) 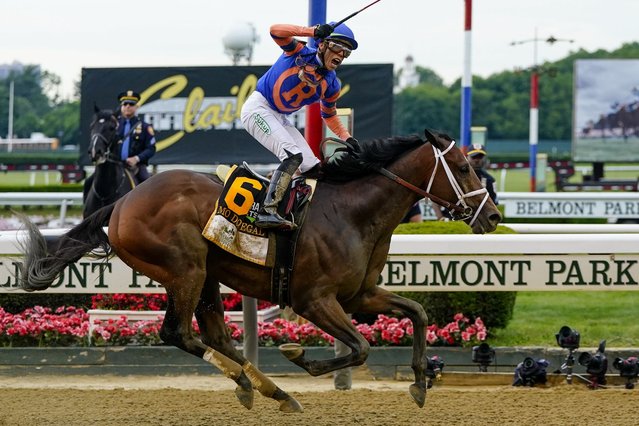 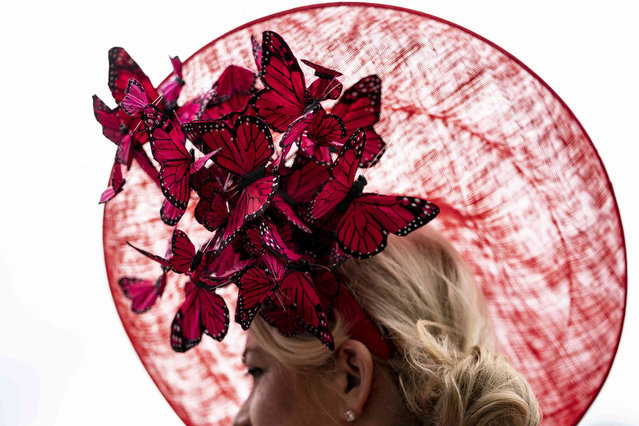 Spectators wear festive hats as they browse the paddock before the 154th running of the Belmont Stakes horse race, Saturday, June 11, 2022, at Belmont Park in Elmont, N.Y. (Photo by John Minchillo/AP Photo) 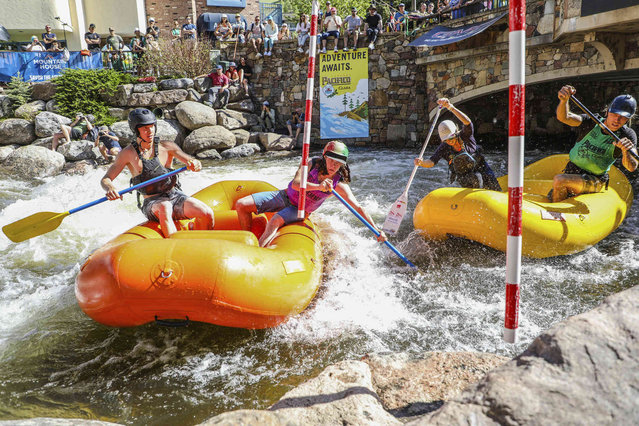 Teams battle it out during the Pacifico Raft Cross at the GoPro Mountain Games on Friday, June 10, 2022 n Vail, Colo. (Photo by Chris Dillmann/Vail Daily via AP Photo) 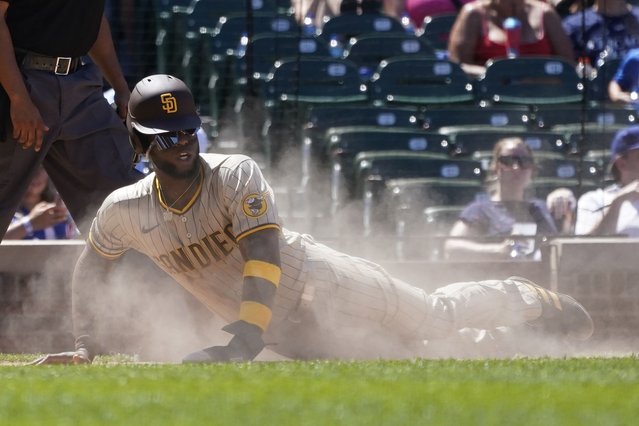 San Diego Padres' Jurickson Profar scores in a cloud of dust off a single by Manny Machado during the fourth inning of a baseball game against the Chicago Cubs Thursday, June 16, 2022, in Chicago. (Photo by Charles Rex Arbogast/AP Photo) 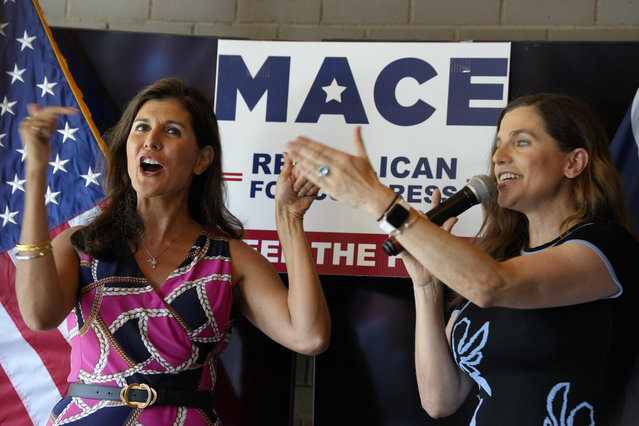 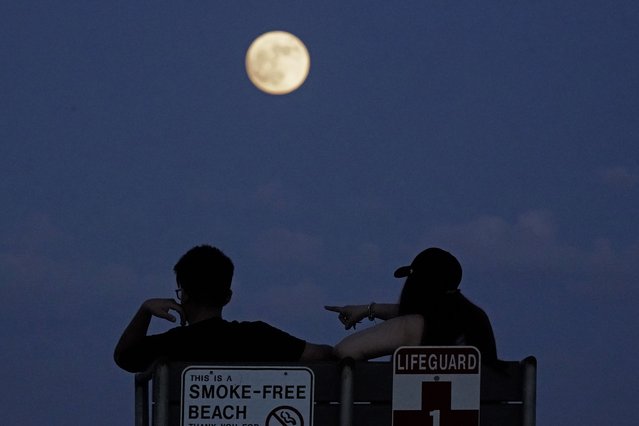 People watch the rising moon Monday, June 13, 2022, in East Boston, Mass. The moon will reach its full stage on Tuesday, during a phenomenon known as a supermoon because its proximity to Earth, and it is also labeled as the “Strawberry Moon” because it is the full moon at strawberry harvest time. (Photo by Charlie Riedel/AP Photo) 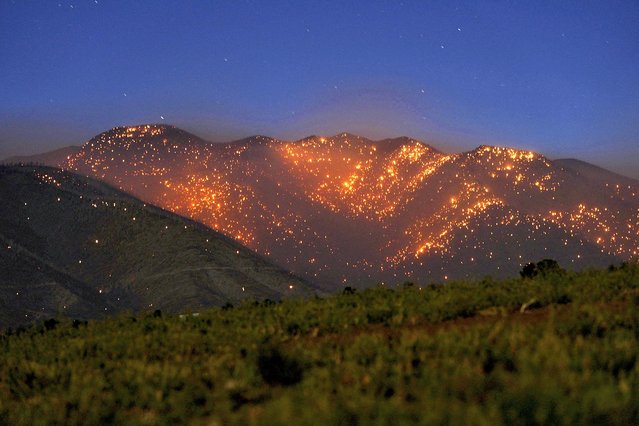 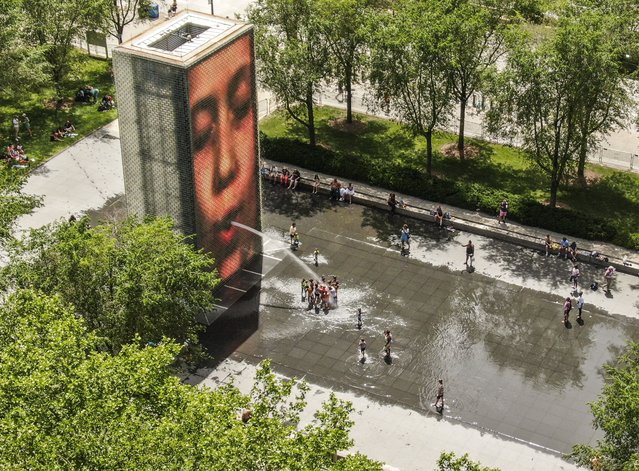 An aerial photo made with a drone shows people seeking relief from a dangerous heat wave at the Crown Fountain and wading pool in Chicago, Illinois, USA, 15 June 2022. Heat warnings and advisories have been issued that affect more than 100,000 people as record breaking temperatures threaten lives and power grids. (Photo by Tannen Maury/EPA/EFE) 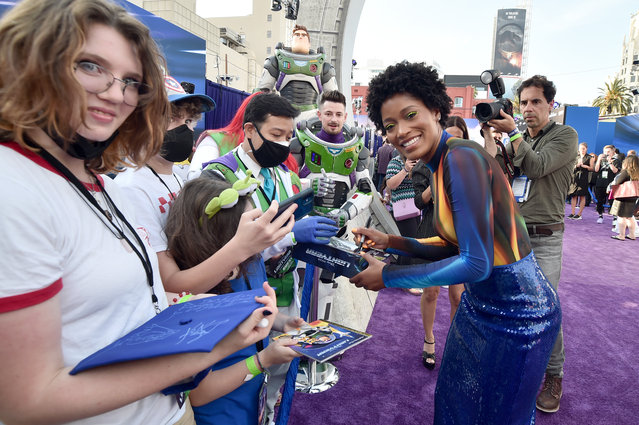 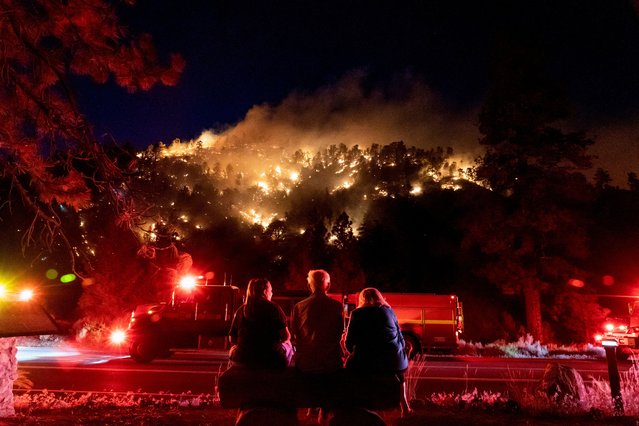 Residents watch part of the Sheep Fire wildfire burn through a forest on a hillside near their homes in Wrightwood, California, U.S. June 11, 2022. (Photo by Kyle Grillot/Reuters) 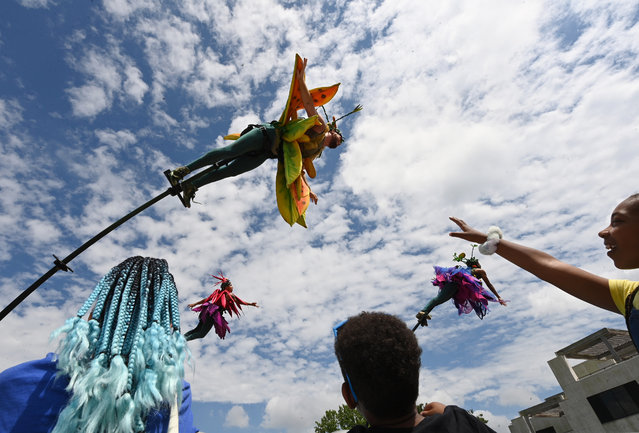 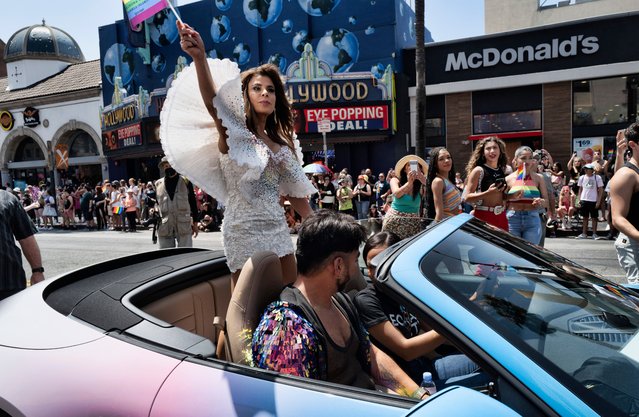 “Icon Grand Marshal”,' Paula Abdul participates in the LA Pride Parade on Sunday, June 12, 2022, in the Hollywood section of Los Angeles. After a two year hiatus due to the COVID-19 pandemic, the LA Pride Parade made a festive return, drawing thousands of people to its new route in Hollywood. (Photo by Richard Vogel/AP Photo) 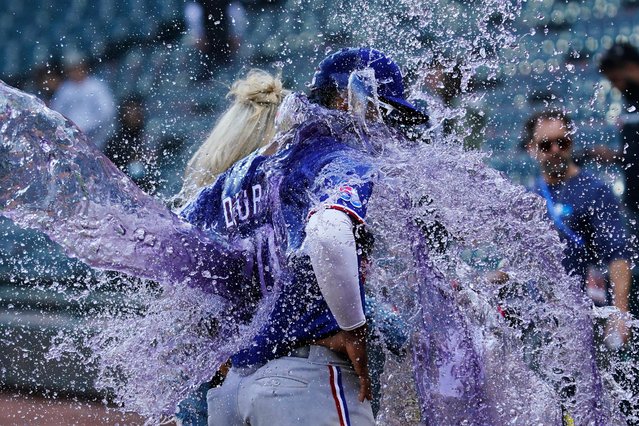 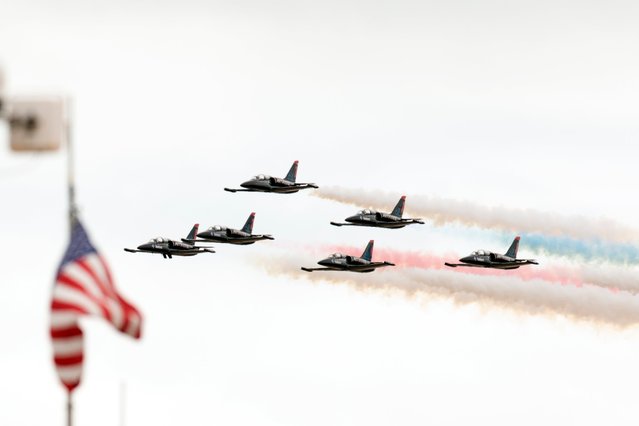 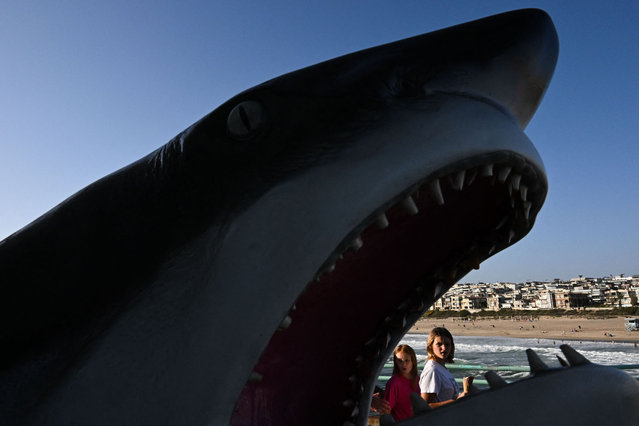 People carry ice cream cones as they walk past a statue of a great white shark on the Manhattan Beach pier on June 14, 2022 in Manhattan Beach, California. The US Federal Reserve is poised to raise borrowing costs on June 15 amid the troubling acceleration of inflation, with the only question being whether officials will opt for the biggest hike in nearly three decades or a smaller step up. (Photo by Patrick T. Fallon/AFP Photo)
Edit Del
22 Jun 2022 04:37:00, post received 0 comments
Publication archive:
←   →
Popular tags:
All tags
Last searches: