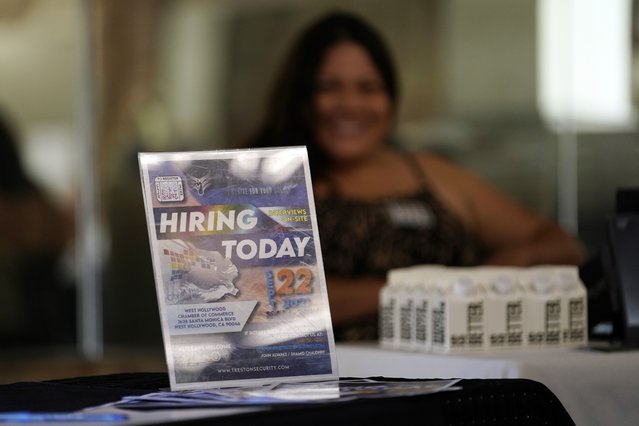 A hiring sign is placed at a booth for prospective employers during a job fair Wednesday, September 22, 2021, in the West Hollywood section of Los Angeles. The number of Americans applying for unemployment aid rose last week for a second straight week to 351,000, a sign that the delta variant of the coronavirus may be disrupting the job market’s recovery, at least temporarily.(Photo by Marcio Jose Sanchez/AP Photo) 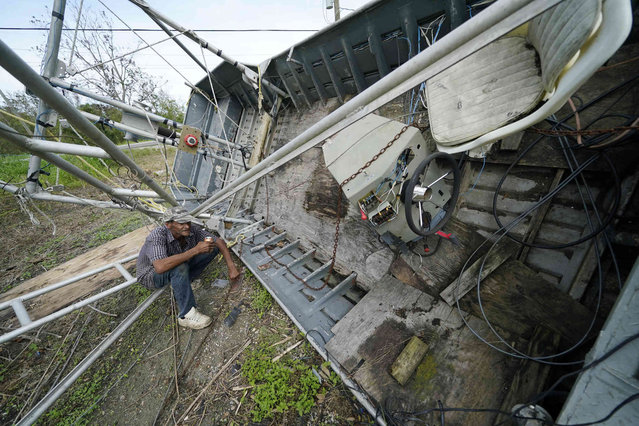 Mike Gaines, a deckhand, sits on the overturned and destroyed shrimp trawler that provides his living, in the aftermath of Hurricane Ida in Plaquemines Parish, La., Monday, September 13, 2021. (Photo by Gerald Herbert/AP Photo) 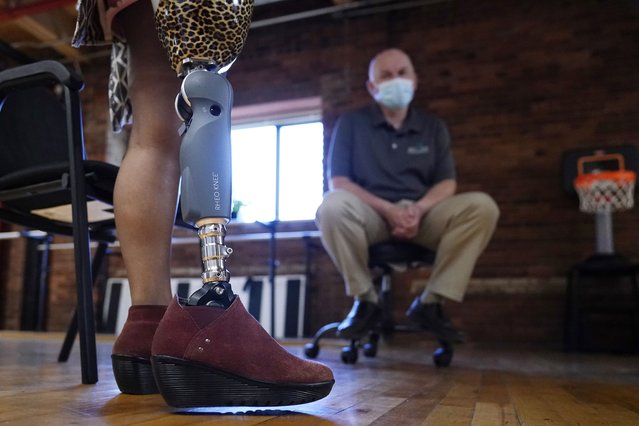 Claudine Humure, of Rwanda, takes a step with her new prosthetic leg as Arthur Graham, prosthetist at Next Step Bionics & Prosthetics, looks on, Monday, September 20, 2021, in Newton, Mass. Humure was orphaned during her country's genocide and lost part of her leg to childhood cancer. Her new leg was provided free by the prosthetic clinic and features the latest in artificial limb technology. (Photo by Charles Krupa/AP Photo) 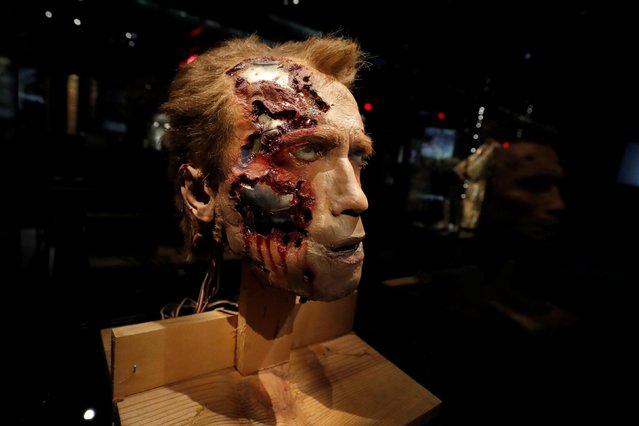 An animatronic T-800 Terminator head from “Terminator 2: Judgement Day” is seen on display during a media preview ahead of the opening of the Academy Museum of Motion Pictures in Los Angeles, California, U.S., September 21, 2021. (Photo by Mario Anzuoni/Reuters) 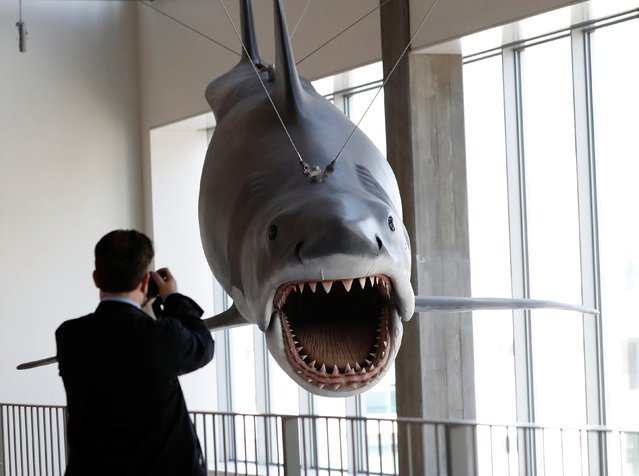 A member of the media shoots video of the only surviving full-size scale model cast from the original mold used on “Jaws” during a media preview ahead of the opening of the Academy Museum of Motion Pictures in Los Angeles, California, U.S., September 21, 2021. (Photo by Mario Anzuoni/Reuters) 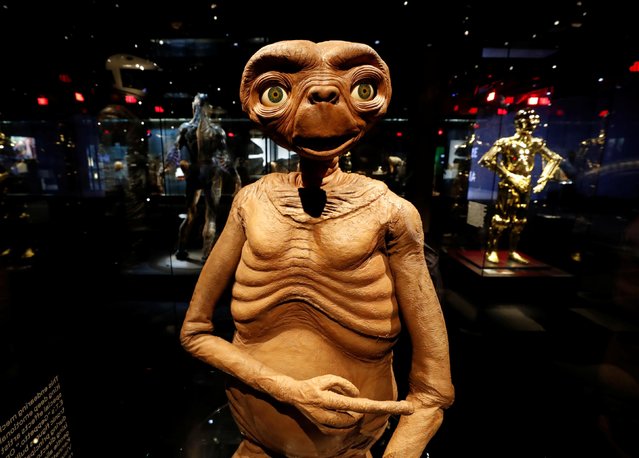 A model from “E.T. The Extra-Terrestrial” is pictured during a media preview ahead of the opening of the Academy Museum of Motion Pictures in Los Angeles, California, U.S., September 21, 2021. (Photo by Mario Anzuoni/Reuters) 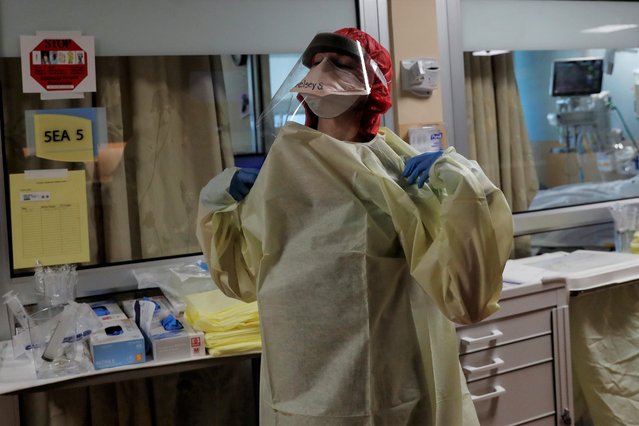 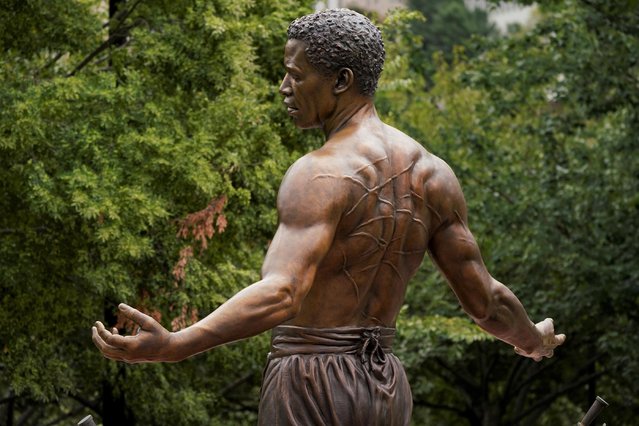 The Emancipation and Freedom Monument designed by Thomas Jay Warren is shown on the day it was unveiled in Richmond, Virginia, U.S., September 22, 2021. Two weeks after the Virginia capital removed a statue of Confederate General Robert E. Lee that had prompted protests over racial injustice, the city unveiled a new monument commemorating the end of slavery. (Photo by Jay Paul/Reuters) 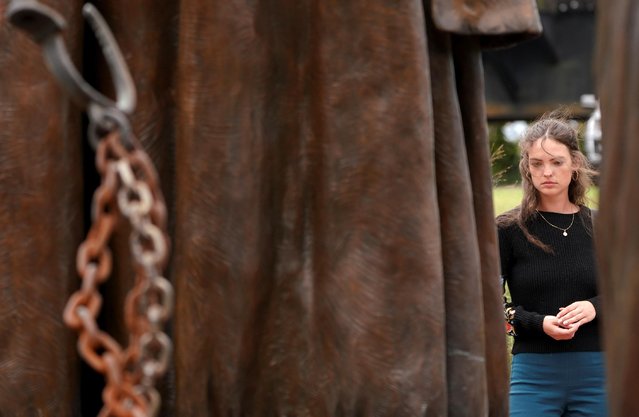 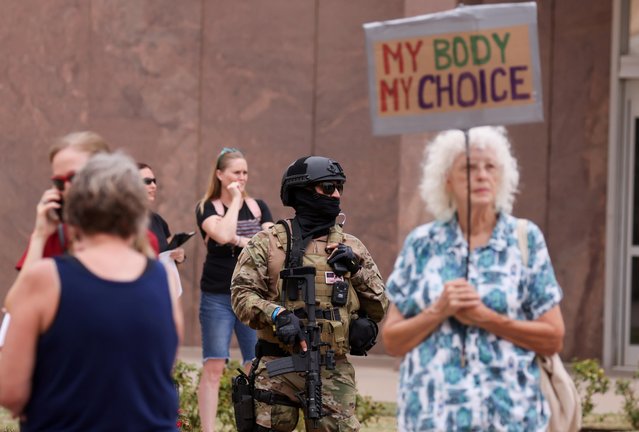 An armed civilian stands as people wait to get to the Senate chambers for the announcement of interim findings from a widely criticized audit of the 2020 election in Phoenix, Arizona, September 24, 2021. (Photo by Mike Blake/Reuters) 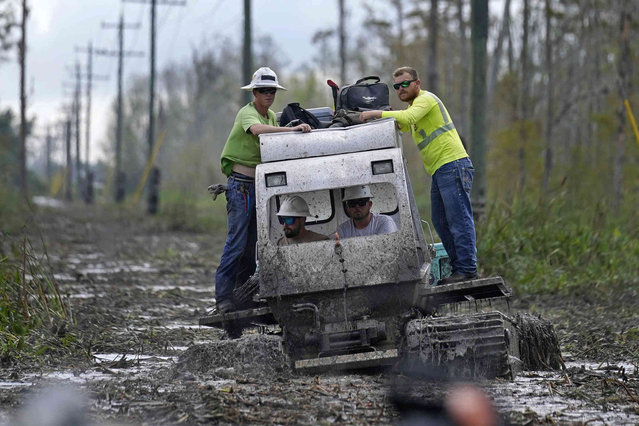 Electrical workers ride through marsh in a marsh buggy to restore power lines in the aftermath of Hurricane Ida in Houma, La., Friday, September 17, 2021. The Louisiana terrain presents special challenges like just getting out to some of the areas where power poles and lines need to be fixed. In some areas lines thread through thick swamps that can only be accessed by air boat or specialized equipment like a marsh buggy. Linemen don waders to climb into chest-high muddy waters also home to alligators and water moccasins. (Photo by Gerald Herbert/AP Photo) 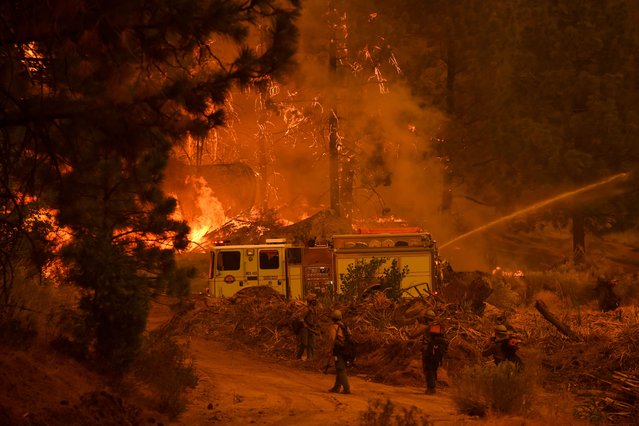 Firefighters work to control the Windy Fire as trees burn in the Sequoia National Forest near Johnsondale, California on September 22, 2021. (Photo by Patrick T. Fallon/AFP Photo) 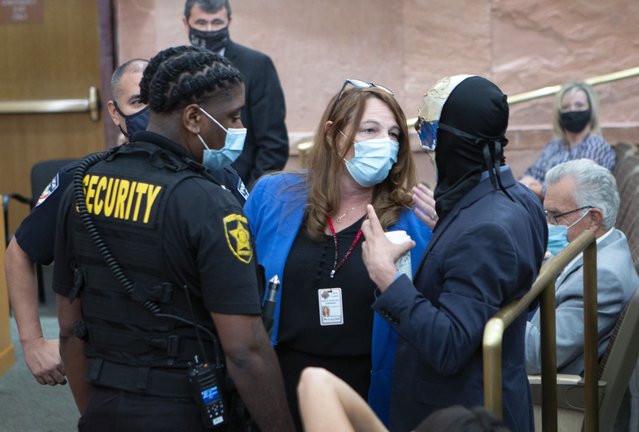 Clark County Commission Chairwoman Marilyn Kirkpatrick, center, talks a man who had refused to keep his mask on during a commission meeting at the Clark County Government Center Tuesday, September 21, 2021. (Photo by Ricardo Torres-Cortez/Las Vegas Sun via AP Photo) 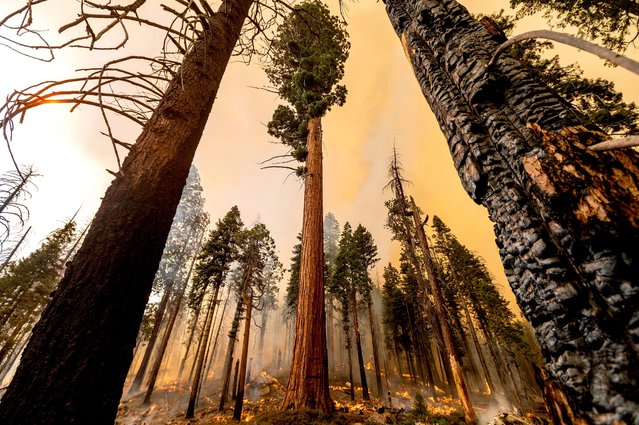 A tree stands in the Trail of 100 Giants grove as flames from the Windy Fire burn in Sequoia National Forest, Calif., on Sunday, September 19, 2021. (Photo by Noah Berger/AP Photo) 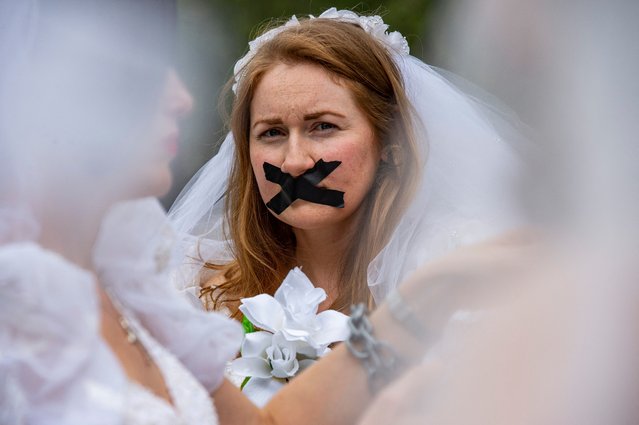 Advocates and child marriage survivors from the group “Unchained at Last” put on wedding gowns, veils, chains and tape over their mouths as they gather on Boston Common before marching to the State House to call for an end to child marriages in Boston, Massachusetts on September 22, 2021. Currently 44 states in the US allow for marriage under the age 18 and the group states that according to a study they did that between 2000 and 2018 some 300,000 children, as young as 10, were legally married in the US. (Photo by Joseph Prezioso/AFP Photo) 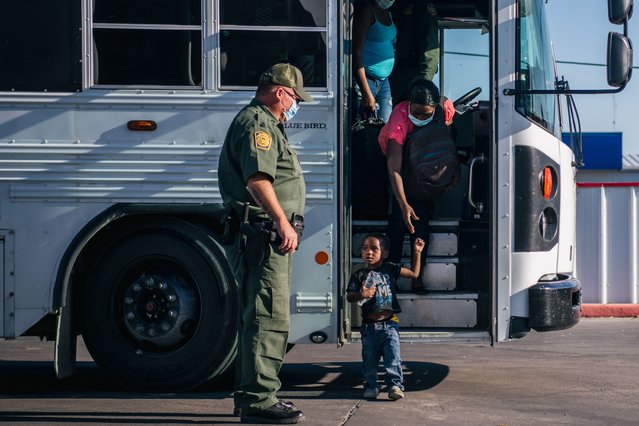 Migrants exit a Border Patrol bus and prepare to be received by the Val Verde Humanitarian Coalition after crossing the Rio Grande on September 22, 2021 in Del Rio, Texas. Thousands of immigrants, mostly from Haiti, seeking asylum have crossed the Rio Grande into the United States. Families are living in makeshift tents under the international bridge while waiting to be processed into the system. U.S. immigration authorities have been deporting planeloads of migrants directly to Haiti while others have crossed the Rio Grande back into Mexico. (Photo by Brandon Bell/Getty Images) 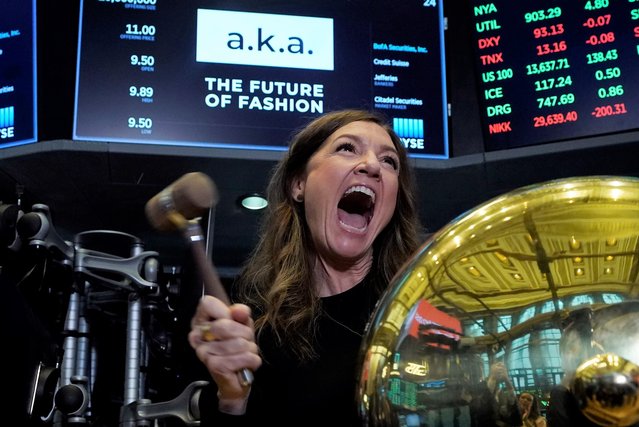 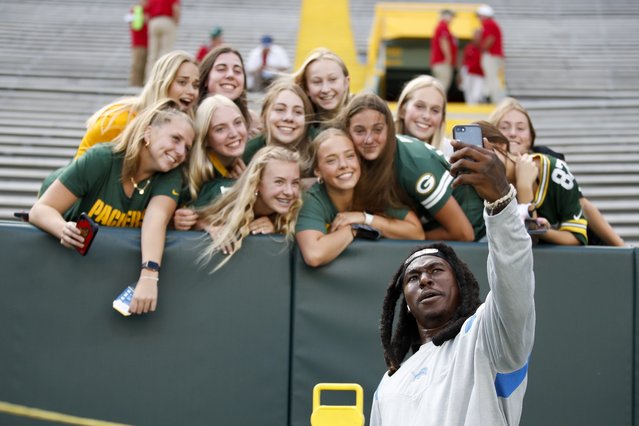 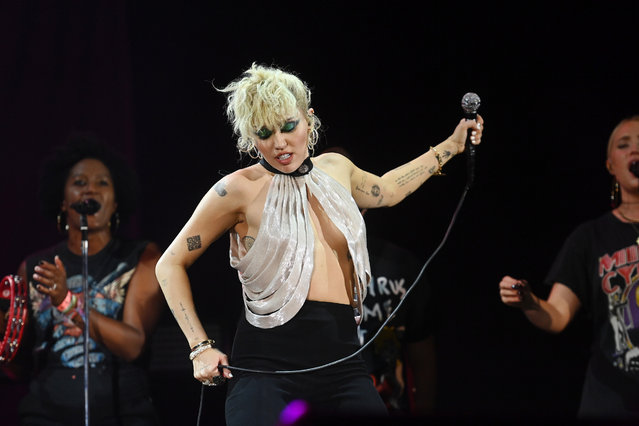 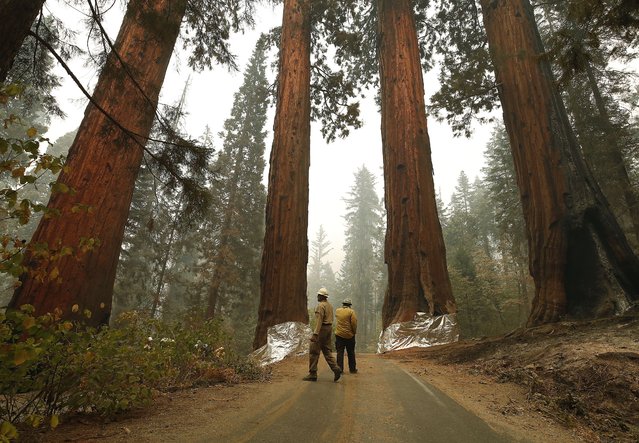 Ed Christopher, left, Deputy Fire Director at U.S. Fish and Wildlife Service, looks over the Four Guardsmen at the entrance to General Sherman at Sequoia National Park, Calif., Wednesday, September 22, 2021. The Four Guardsmen were wrapped by structure wrap to protect them from fires along with General Sherman. (Photo by Gary Kazanjian/AP Photo) 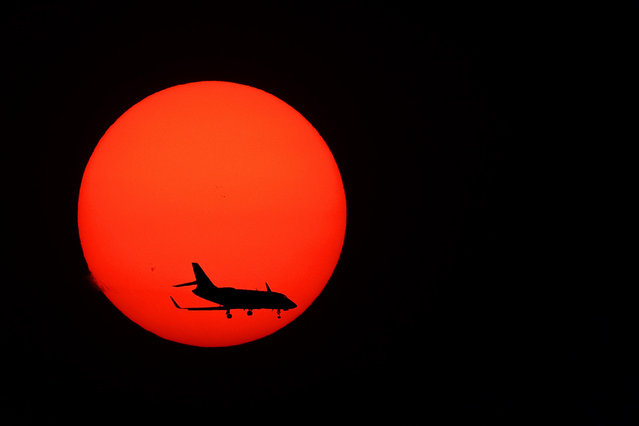