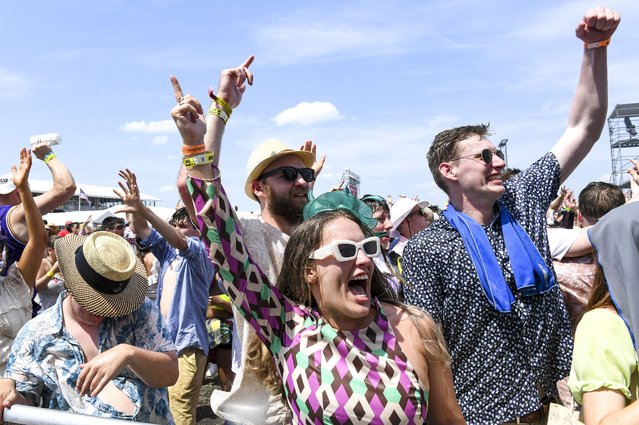 The crowd in the infield were having a great time during the 147th running of the Preakness Stakes at Pimlico Race Course in Baltimore on May 21, 2022. Photo by Jonathan Newton/The Washington Post) 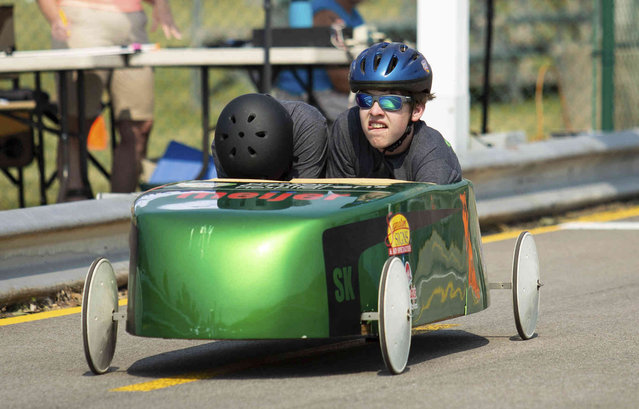 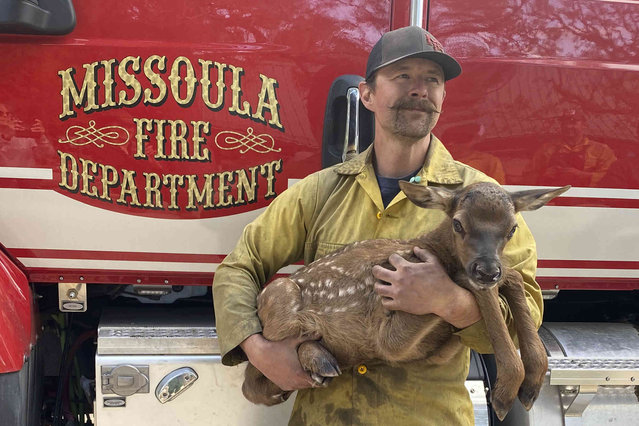 In this photo provided by Nate Sink, the Missoula, Montana-based firefighter, cradles a newborn elk calf that he encountered in a remote, fire-scarred area of the Sangre de Cristo Mountains near Mora, N.M., on Saturday, May 21, 2022. Sink says he saw no signs of the calf's mother and helped transport the abandoned baby bull to a wildlife rehabilitation center to be raised alongside a surrogate gown elk. (Photo by Nate Sink via AP Photo) 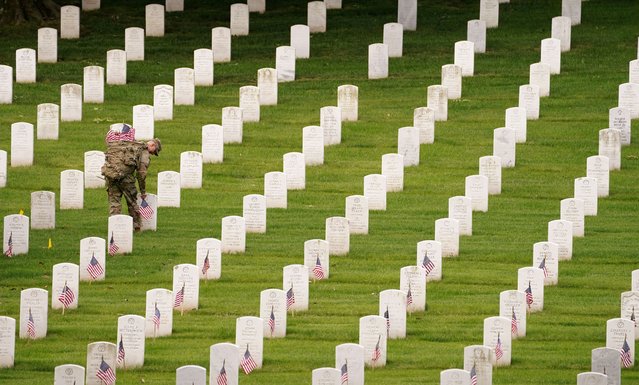 A soldier of the 3rd U.S. Infantry Regiment (The Old Guard) places flags on headstones ahead of Memorial Day, an annual ceremony where over one thousand soldiers place small American flags at more than 260,000 headstones at Arlington National Cemetery, in Arlington, Virginia, U.S., May 26, 2022. (Photo by Kevin Lamarque/Reuters) 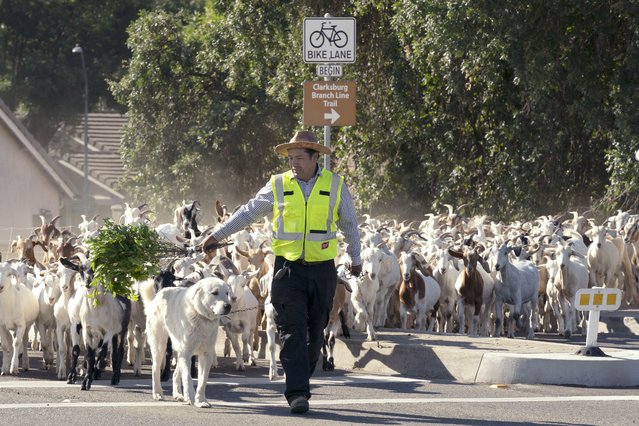 Henry Ambrosio leads a herd of goats across Jefferson Blvd to a new field to graze on in West Sacramento, Calif., Monday, May 23, 2022. The city of West Sacramento hired Blue Tent Farms, of Redding, to bring their goats to graze along the Barge Canal and Clarksburg Branch Line Trail to reduce the potential fire hazard in the area. (Photo by Rich Pedroncelli/AP Photo) 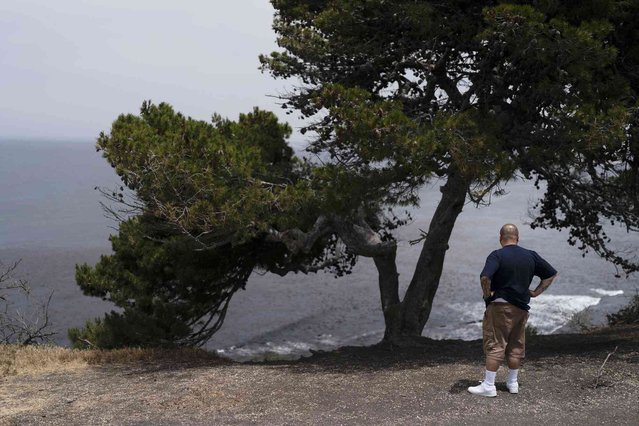 An onlooker stands near an ocean cliff in Palos Verdes Estates, Calif., Monday, May 23, 2022. Four people fell off a Southern California ocean cliff in the early morning darkness on Monday and a man was killed and two women were critically injured, authorities said. (Photo by Jae C. Hong/AP Photo) 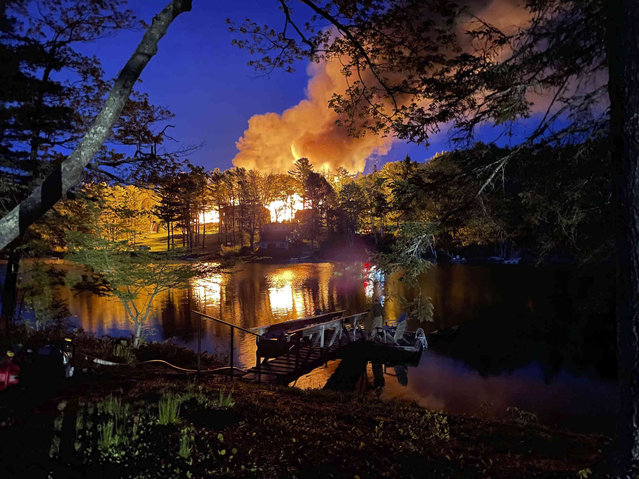 In this image provided by Maverick Irwin, Beach Cove Waterfront Inn is engulfed in flames as smoke from the fire rises into the night sky, Monday, May 23, 2022, in Boothbay Harbor, Maine. The state fire marshal's office is investigating the fire. The fire chief said no one was hurt. The owners were at the inn, which was scheduled to open on Memorial Day weekend. (Photo by Maverick Irwin via AP Photo) 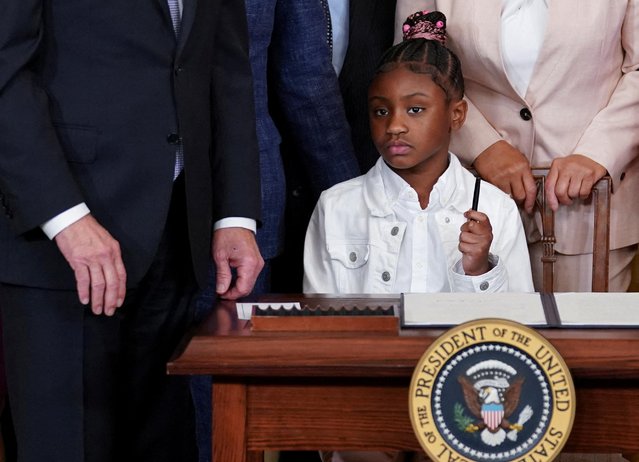 George Floyd's daughter Gianna Floyd sits at the presidential desk holding up one of the president's pens as U.S. President Joe Biden talks to the crowd from beside her after Biden signed an executive order to reform federal and local policing on the second anniversary of the death of her father George Floyd in Minneapolis police custody, in the East Room of the White House in Washington, U.S., May 25, 2022. (Photo by Kevin Lamarque/Reuters) 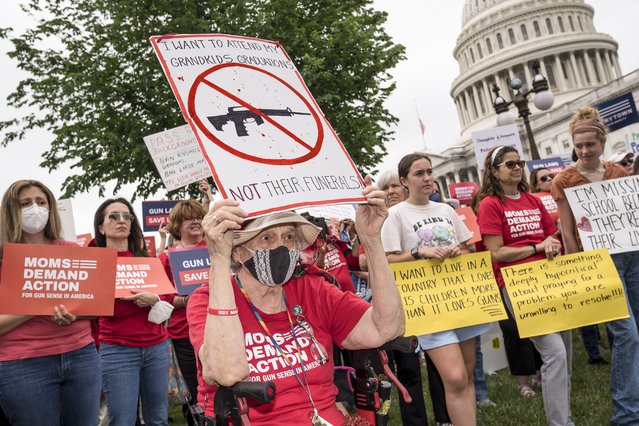 Activists join Senate Democrats outside the Capitol to demand action on gun control legislation after a gunman killed 19 children and two teachers in a Texas elementary school this week, in Washington, Thursday, May 26, 2022. (Photo by J. Scott Applewhite/AP Photo) 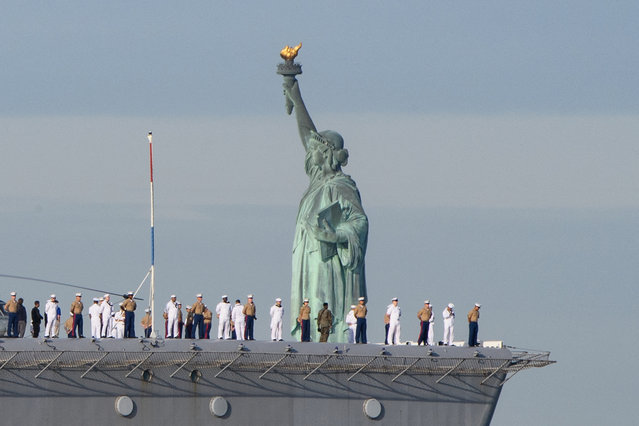 US Sailors and Marines stand on the flight deck of the USS Bataan as the ship passes the Statue of Liberty during Fleet Week in New York Harbor on May 25, 2022. (Photo by Angela Weiss/AFP Photo) 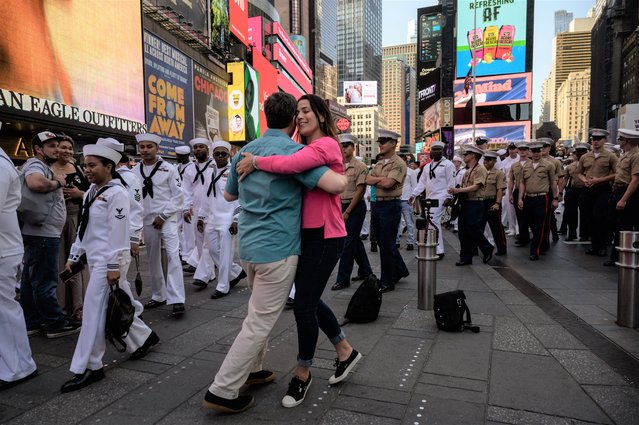 US servicemembers walk past a couple dancing in Times Square, as part of “Fleet Week” celebrations in New York on May 25, 2022. Fleet Week is a week-long celebration of sea services which aims to provide an opportunity for members of the public to meet sailors, marines, and coastguard personnel through various events and displays. (Photo by Ed Jones/AFP Photo) 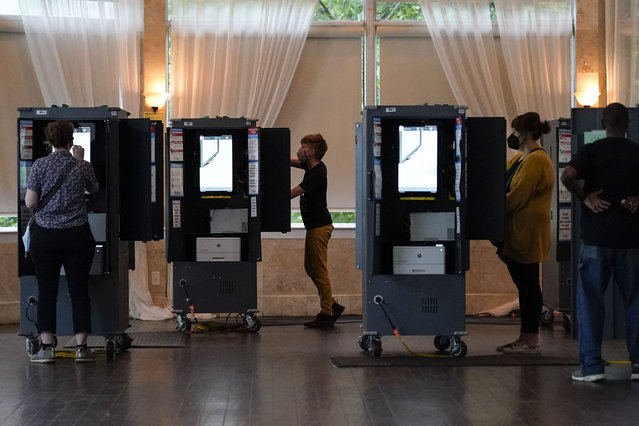 People vote in the Georgia's primary election on Tuesday, May 24, 2022, in Atlanta. (Photo by Brynn Anderson/AP Photo) 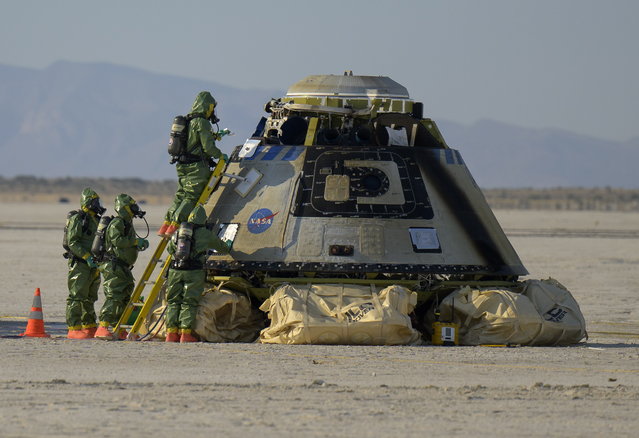 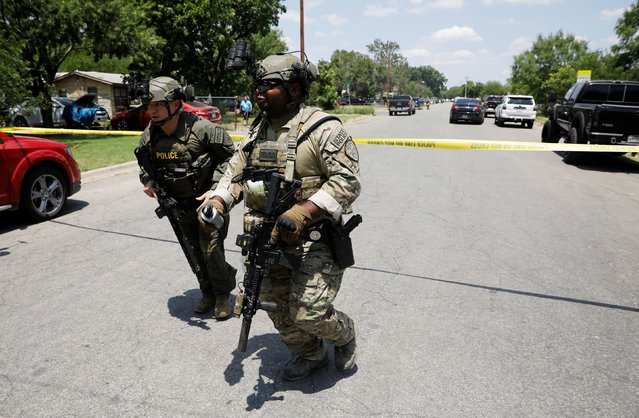 Law enforcement personnel run away from the scene of a suspected shooting near Robb Elementary School in Uvalde, Texas, U.S. May 24, 2022. (Photo by Marco Bello/Reuters) 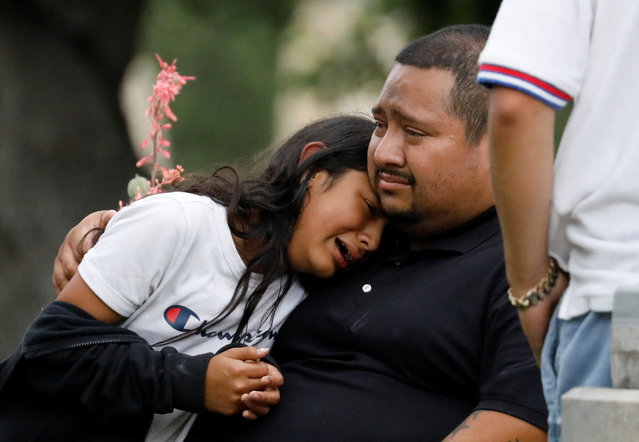 People react outside the Ssgt Willie de Leon Civic Center, where students had been transported from Robb Elementary School after a shooting, in Uvalde, Texas, U.S. May 24, 2022. (Photo by Marco Bello/Reuters) 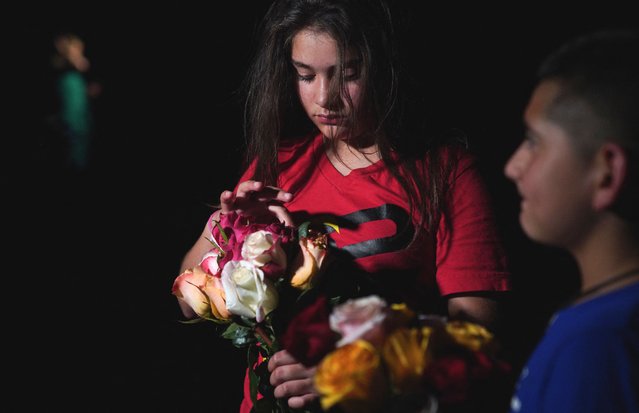 A young girl holds flowers outside the Willie de Leon Civic Center where people gather to mourn in Uvalde, Texas, May 24, 2022. A teenage gunman killed 19 young children in a shooting at an elementary school in Texas on Tuesday, in the deadliest US school shooting in years The attack in Uvalde, Texas – a small community about an hour from the Mexican border – is the latest in a spree of deadly shootings in America, where horror at the cycle of gun violence has failed to spur action to end it. (Photo by Allison Dinner/AFP Photo) 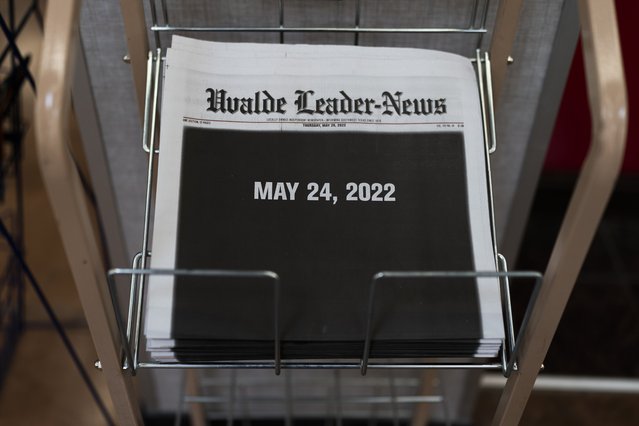 Copies of the Uvalde Leader-News with a black front page showing the date of the Robb Elementary School shooting are seen at a market in Uvalde, Texas, Thursday, May 26, 2022. Law enforcement authorities in Texas are facing questions and criticism over how much time elapsed before they stormed an Uvalde elementary school classroom and put a stop to the rampage by a gunman who killed 19 children and two teachers. (Photo by Jae C. Hong/AP Photo) 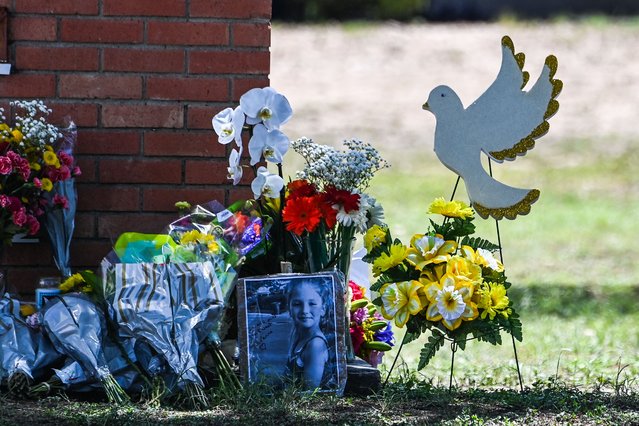 The photo of a little girl, victim of the shooting, is seen by flowers placed on a makeshift memorial in front of Robb Elementary School in Uvalde, Texas, on May 25, 2022. The tight-knit Latino community of Uvalde was wracked with grief Wednesday after a teen in body armor marched into the school and killed 19 children and two teachers, in the latest spasm of deadly gun violence in the US. (Photo by Chandan Khanna/AFP Photo) 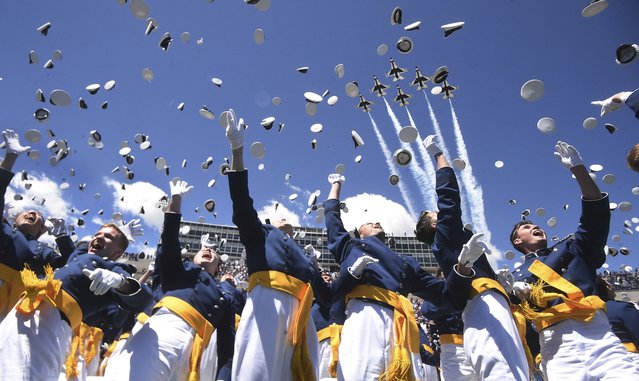 Air Force Academy cadets throw their hats into the air as the Thunderbirds flyover at the end of graduation on Wednesday, May 25, 2022 in Colorado Springs, Colo. (Photo by Jerilee Bennett/The Gazette via AP Photo) 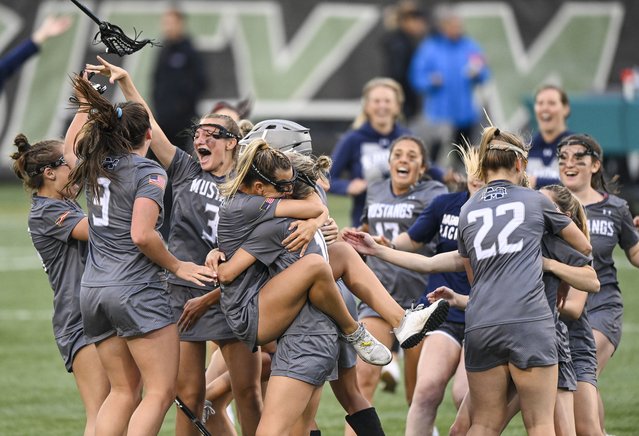