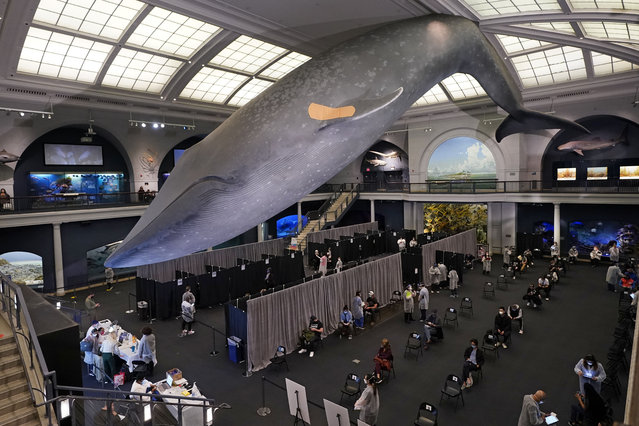 People rest in the observation area, at right, after receiving COVID-19 vaccinations under the 94-foot-long, 21,000-pound model of a blue whale, in the Milstein Family Hall of Ocean Life, at the American Museum of Natural History, in New York, Friday, April 23, 2021. Appointments are no longer necessary at any of the coronavirus vaccination sites run by New York City. New York City Mayor Bill de Blasio announced Friday that anyone eligible for the vaccine could walk up to any of the city's mass vaccination sites and get a shot. The change comes as supplies of the vaccine have increased. (Photo by Richard Drew/AP Photo) 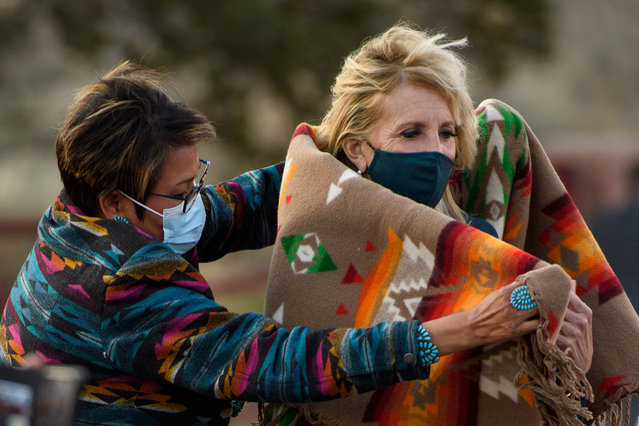 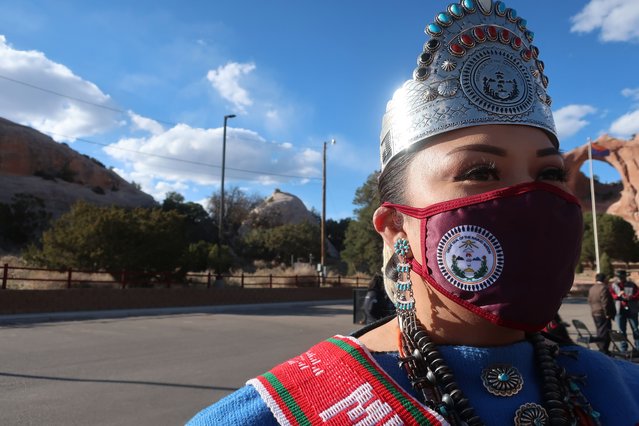 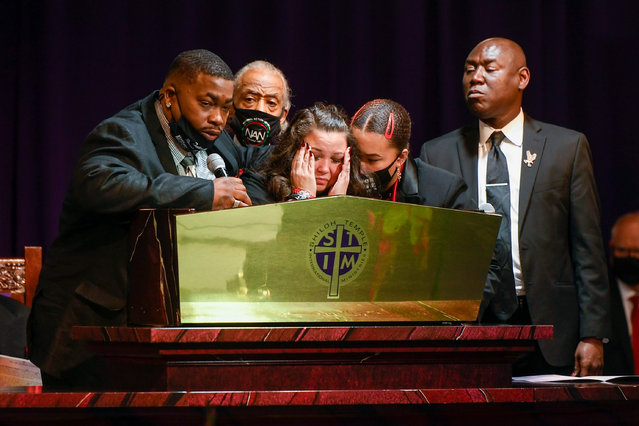 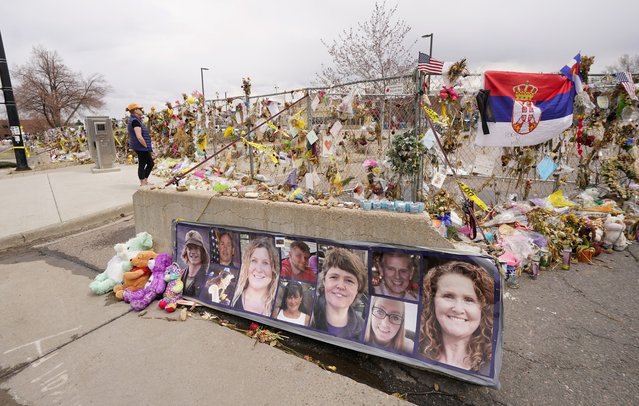 The photographs of the 10 victims of a mass shooting in a King Soopers grocery store adorn a cement barrier outside the store on Friday, April 23, 2021, in Boulder, Colo. The man accused of killing the people at the crowded Colorado supermarket last month armed himself with 10 high-capacity ammunition magazines, devices banned in the state after previous mass shootings, a prosecutor said Thursday. (Photo by David Zalubowski/AP Photo) 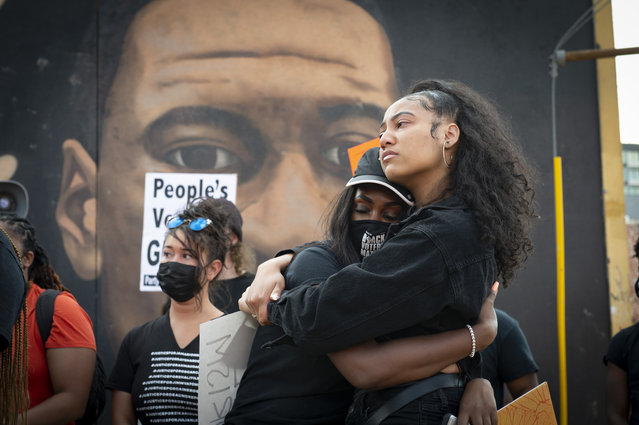 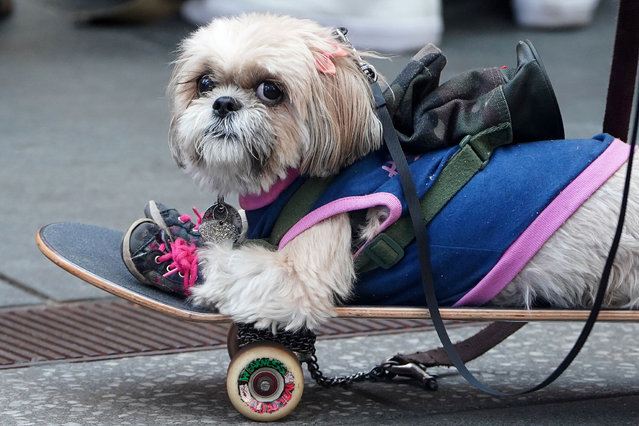 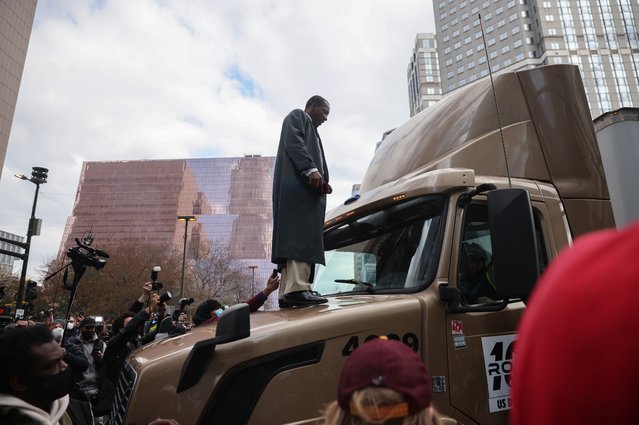 A man stands atop a truck which had attempted to make its way past the crowd as people react after the verdict was read in the Derek Chauvin trial on April 20, 2021 In Minneapolis, Minnesota. Former police officer Derek Chauvin was on trial on second-degree murder, third-degree murder and second-degree manslaughter charges in the death of George Floyd May 25, 2020. After video was released of then-officer Chauvin kneeling on Floyd’s neck for nine minutes and twenty-nine seconds, protests broke out across the U.S. and around the world. The jury found Chauvin guilty on all three charges. (Photo by Scott Olson/Getty Images) 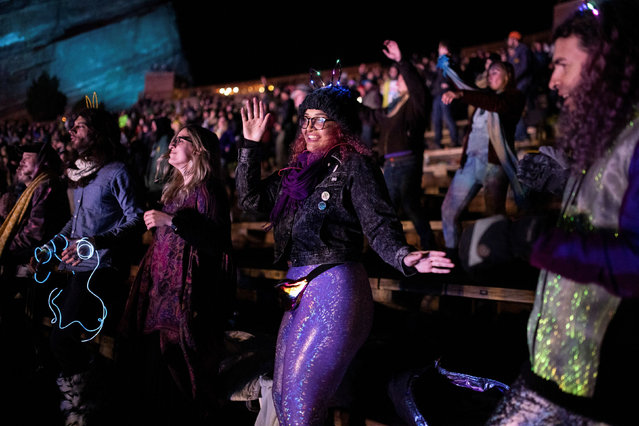 Fans enjoy music as Lotus performs at the opening night of Red Rocks Amphitheatre as coronavirus disease (COVID-19) restrictions are eased with a capacity of 2,500 people in Morrison, Colorado, U.S., April 22, 2021. (Photo by Alyson McClaran/Reuters) 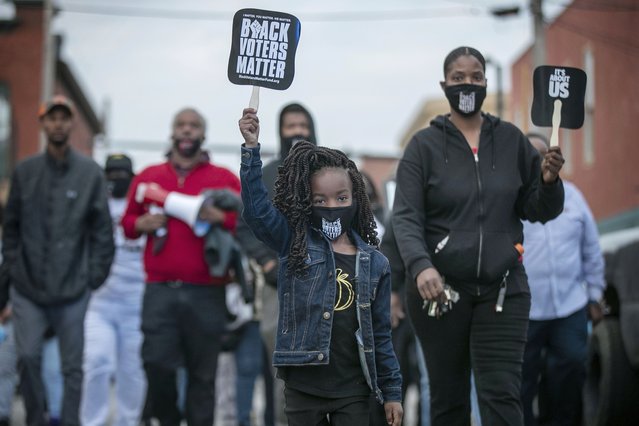 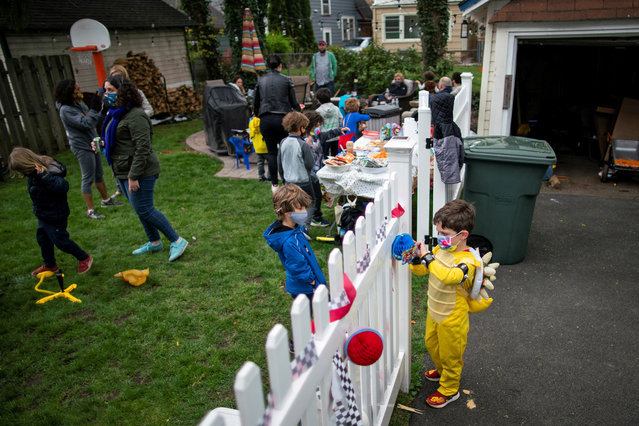 Reuben Goodman adjusts decorations as he plays with friends in the backyard during his 6th birthday party in person, after all family members have been vaccinated against the coronavirus disease (COVID-19), in South Orange, New Jersey U.S., April 17, 2021. (Photo by Eduardo Munoz/Reuters) 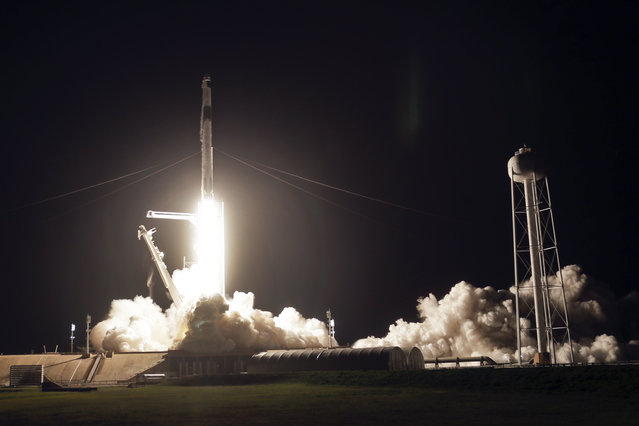 A SpaceX Falcon 9 rocket with the Crew Dragon space capsule lifts off from pad 39A at the Kennedy Space Center in Cape Canaveral, Fla., Friday, April 23, 2021. (Photo by John Raoux/AP Photo) 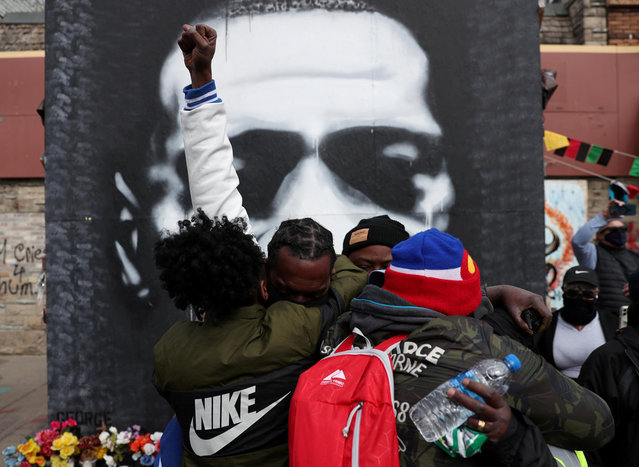 People react after the verdict in the trial of former Minneapolis police officer Derek Chauvin, found guilty of the death of George Floyd, at George Floyd Square in Minneapolis, Minnesota, U.S., April 20, 2021. (Photo by Adrees Latif/Reuters) 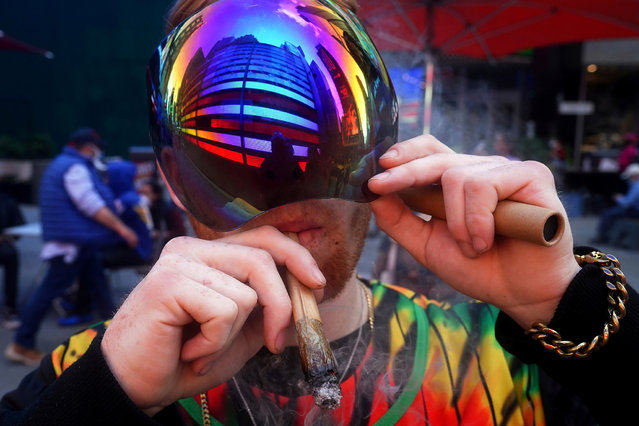 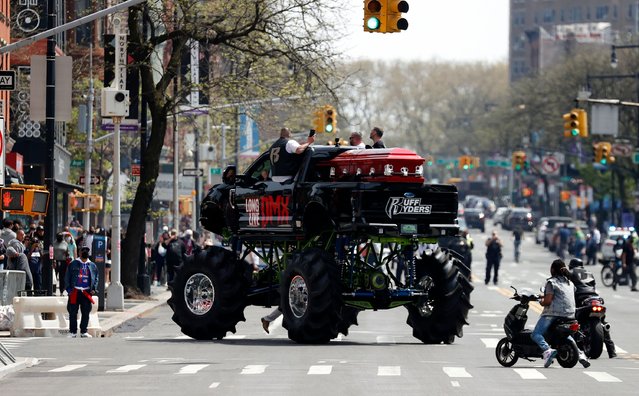 The casket of US rapper is seen on a monster truck on Flatbush avenue outside the Barclays Center where a private memorial for US rapper DMX is being held in Brooklyn, New York, USA, 24 April 2021. DMX died at the age of 50, after he was admitted to the hospital for a heart attack where he remained on life support until 09 April 2021. (Photo by Jason Szenes/EPA/EFE) 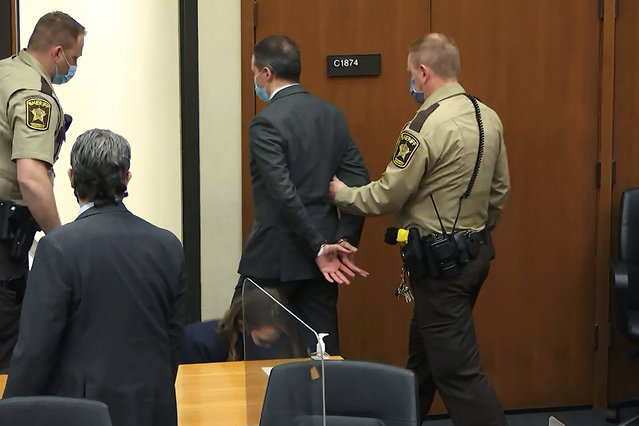 In this image from video, former Minneapolis police officer Derek Chauvin is taken into custody as his attorney Eric Nelson, left, watches, after his bail was revoked after he was found guilty on all three counts in his trial for the 2020 death of George Floyd, Tuesday, April 20, 2021, at the Hennepin County Courthouse in Minneapolis. (Photo by Court TV via AP Photo, Pool) 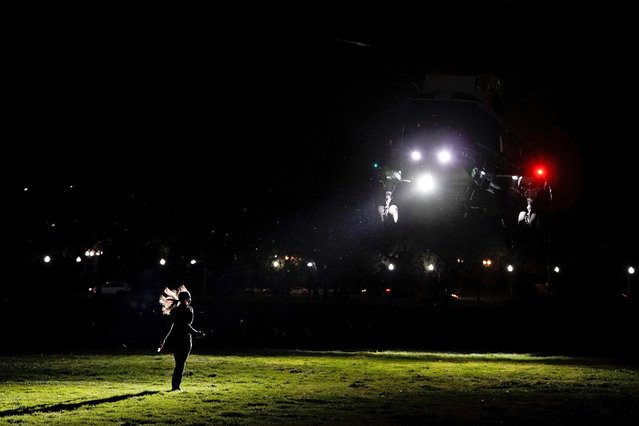 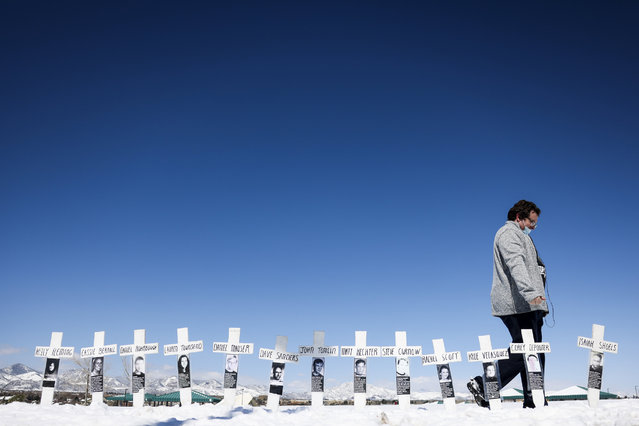 Tyler Vielie walks past crosses with the names of the victims of the Columbine High School shooting next to the Columbine Memorial on April 20, 2021 in Littleton, Colorado. Twelve students and a teacher were killed in the mass shooting 22 years ago today, which at the time was the deadliest school shooting in US history. (Photo by Michael Ciaglo/Getty Images)
Edit Del
27 Apr 2021 09:44:00, post received 0 comments
Publication archive:
←   →
Popular tags:
All tags
Last searches: