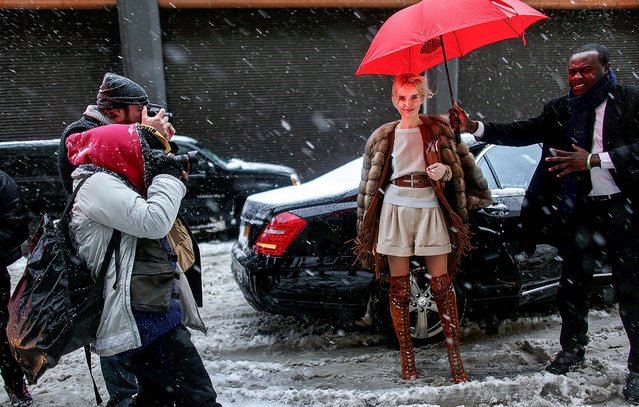 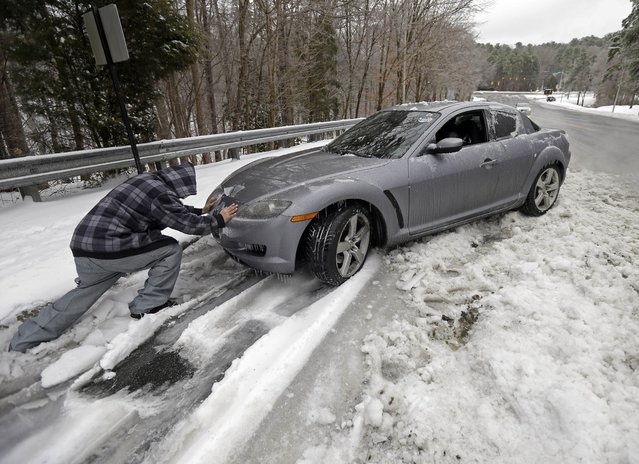 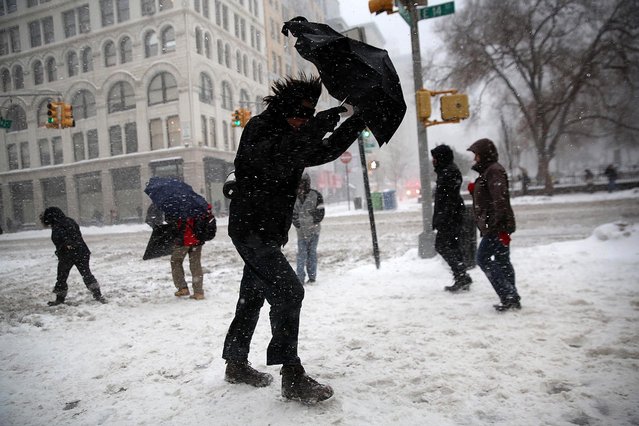 A man braces his umbrella while walking through the snow in New York City. Heavy snow and high winds made for a hard morning commute in the city. (Photo by John Moore/Getty Images) 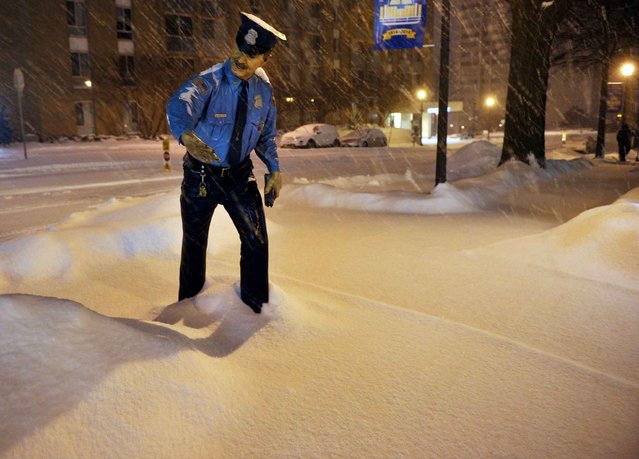 A view of a statue of a police man ankle deep in snow in Chevy Chase, Maryland, in the early hours of February 13, 2014. A deadly ice storm stranded scores of people on slick roads and knocked out power to hundreds of thousands of US homes as winter-weary Americans dug in against Mother Nature's latest blow. Accumulation of between 4 to 8 inches, 10 to 20 cm, was expected by the morning. (Photo by Mandel Ngan/AFP Photo) 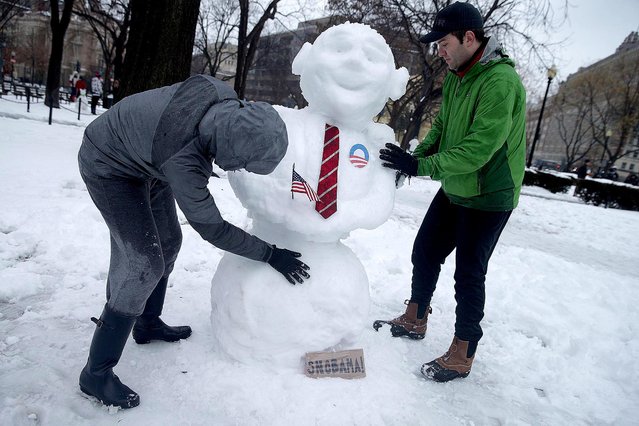 Daphne Kiplinger and her husband Dave Steadman sculpt a “Snowbama” in Dupont Circle in Washington, DC. Up to 12 inches of snow fell over the Washington area, causing WMATA to cancel bus service. (Photo by Chip Somodevilla/Getty Images) 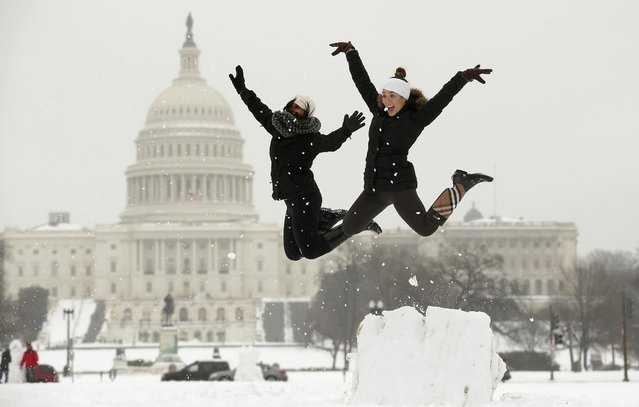 Adrienne Sipe (L) and Brooke Gilliam of Washington D.C. leap off a snow podium they made near the U.S. Capitol in Washington February 13, 2014. A deadly and intensifying winter storm packing heavy snow, sleet and rain pelted a huge swath of the U.S. East Coast on Thursday, grounding flights and shuttering schools and government offices. (Photo by Kevin Lamarque/Reuters) 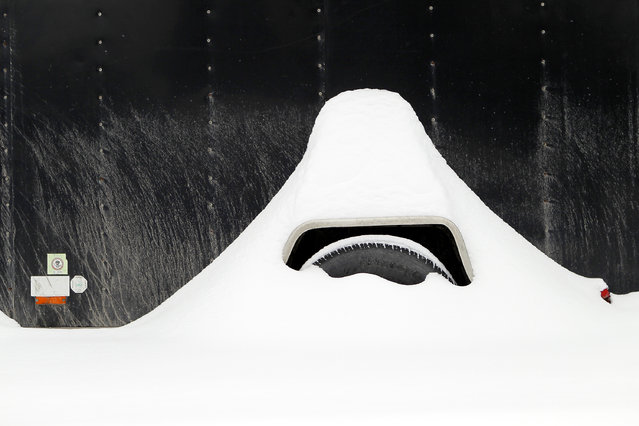 Snow is piled high on a trailer in Roanoke, Virginia. Parts of Roanoke received a foot or more of snow. (Photo by Rebecca Barnett/The Roanoke Times) 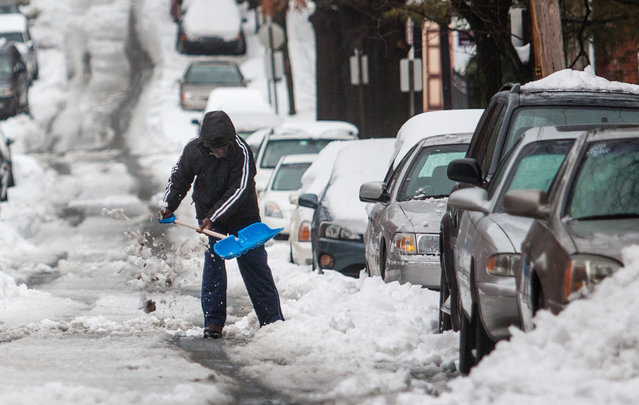 A man shovels out his car along Ninth Street in Wilmington, Del. on Thursday afternoon, February 13, 2014. The city saw nearly a foot of snow fall over night, and heavy sleet in the morning, making travel difficult. (Photo by Kyle Grantham/AP Photo/The Wilmington News-Journal) 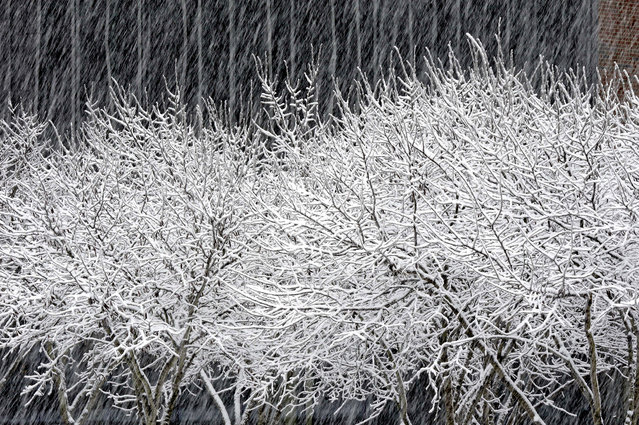 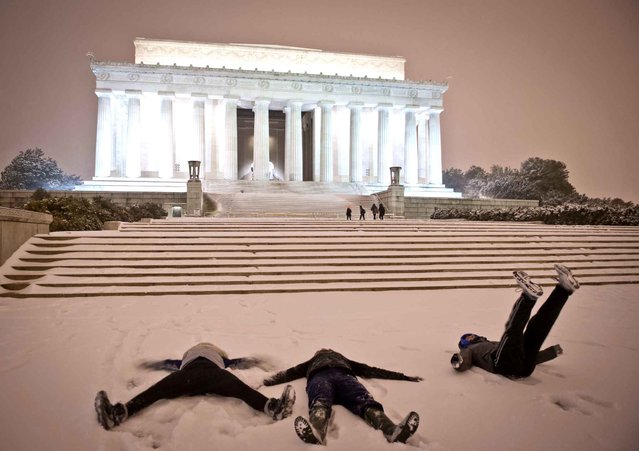 Young people make “snow angel” shapes in the snow in front of the Lincoln Memorial as a heavy snow storm hits Washington D.C. on February 13, 2014. The eastern US, in the grips of one of the most brutal winters in recent memory, braced for what forecasters warned could be the worst broadside yet – a massive storm with the season's heaviest snowfall. (Photo by /AFP Photo) 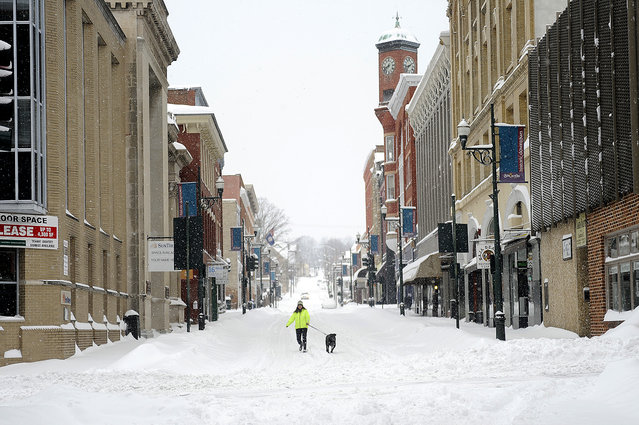 Gerry Stowers walks her dog, Jane Rambo, down the middle of Beverley Street after a snowstorm accumulating over a foot of snow fell in Staunton, Virginia. (Photo by Katie Currid/The News Leader) 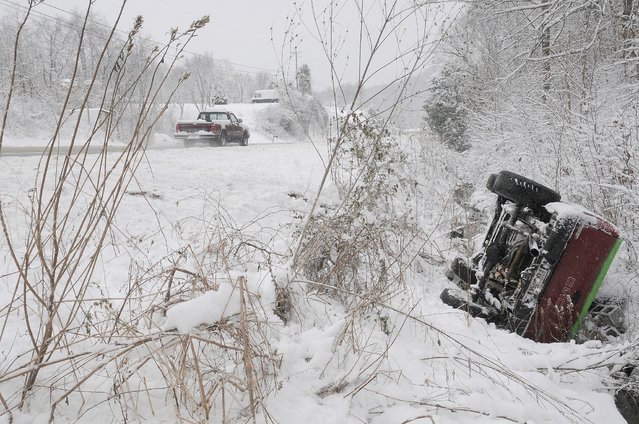 An abandoned truck sits on it's side in a shallow creek along Chapman Highway in Sevier County Thursday, February 13, 2014, near Sevierville, Tenn. Emergency personnel checked the truck and then moved on to more pressing matters as reports of 3-10 inches of snow fell overnight. (Photo by Curt Habraken/AP Photo/The Mountain Press) 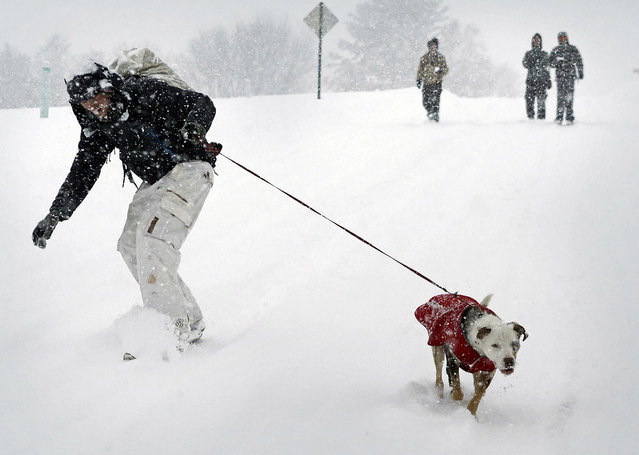 Hayden Curbow gets pulled along by his dog Hazel while venturing out in the snow with friends in Blacksburg Virginia. Curbow was riding a skateboard with an old snow ski screwed to the bottom. (Photo by Matt Gentry/The Roanoke Times) 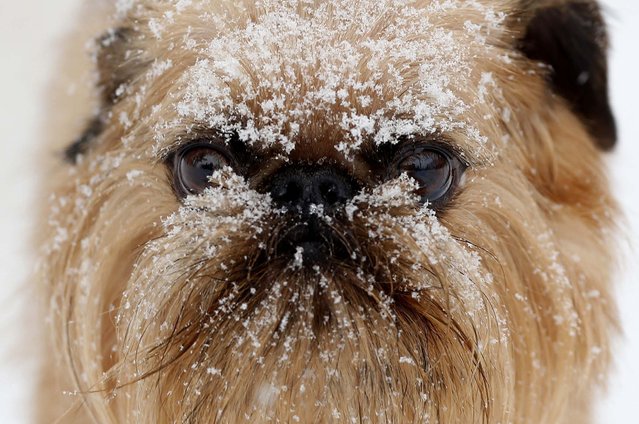 Snow rests on the face of Camper, during a midday walk by the Hounds on the Hudson dog day care center in Albany, New York. (Photo by Mike Groll/Associated Press) 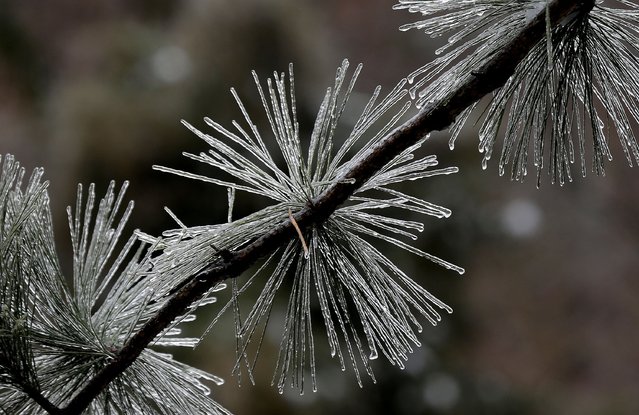 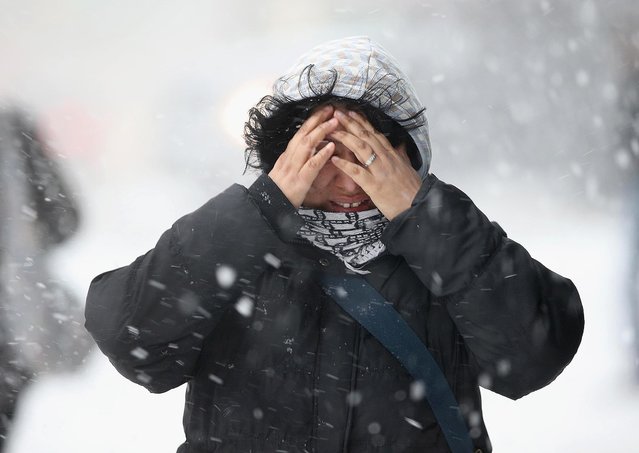 A woman covers her face while walking through the snow in New York City. (Photo by John Moore/Getty Images) 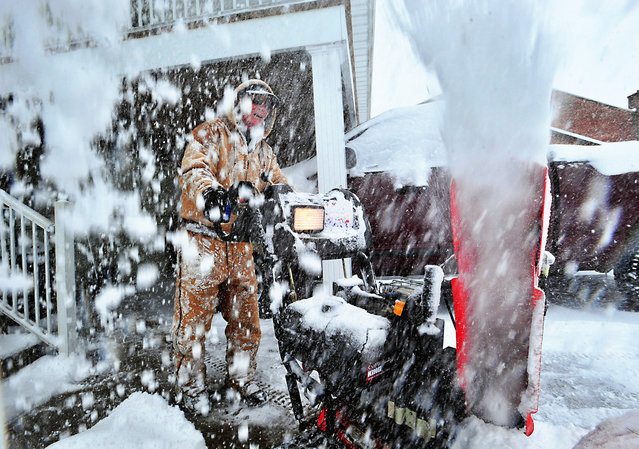 Terry Jones runs a snowblower at the Chambersburg Club during the biggest winter storm of the season in Chambersburg, Pennsylvania. (Photo by Markell DeLoatch/Public Opinion) 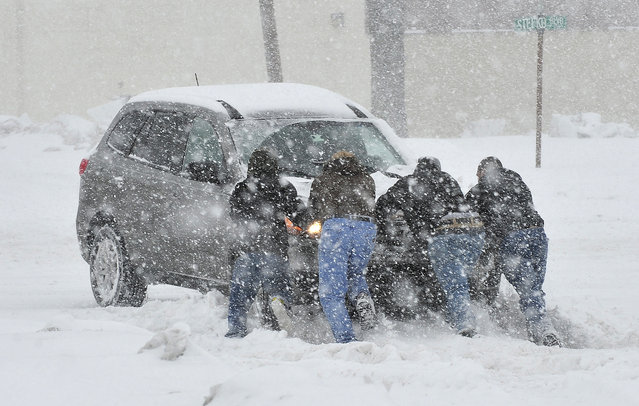 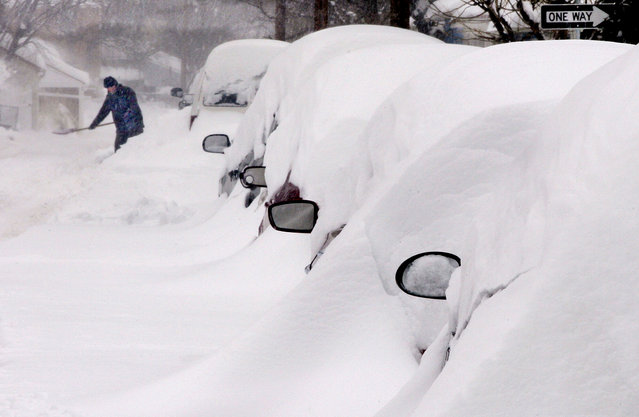 Snow covers a line of vehicles as a man digs out in Winchester, Virginia. (Photo by Scott Mason/The Winchester Star) 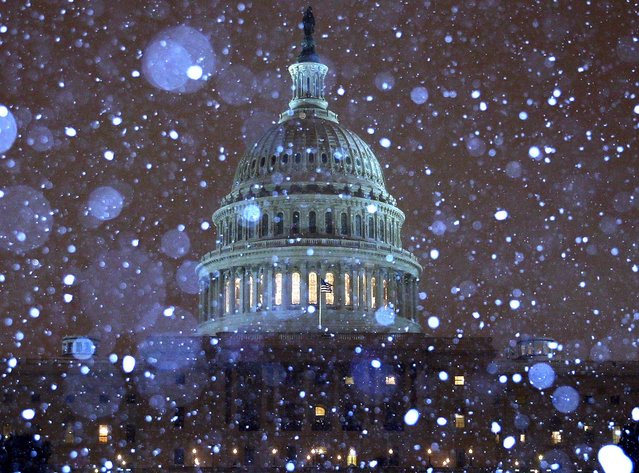 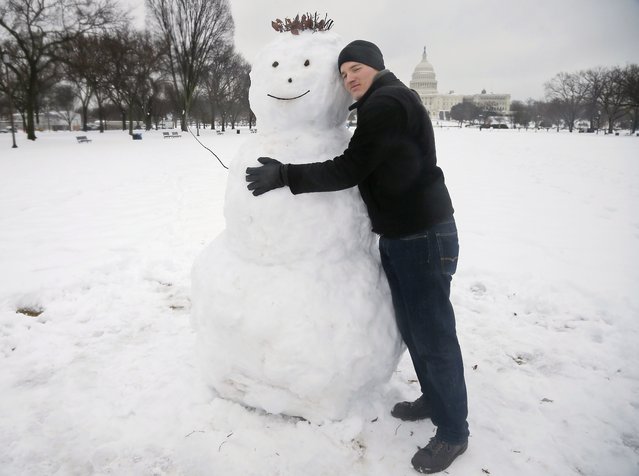 Larry Gard from Chicago hugs a snowman he just built on the National Mall in Washington, Thursday, February 13, 2014. After pummeling wide swaths of the South, a winter storm dumped nearly a foot of snow in Washington as it marched Northeast and threatened more power outages, traffic headaches and widespread closures for millions of residents. (Photo by Charles Dharapak/AP Photo) 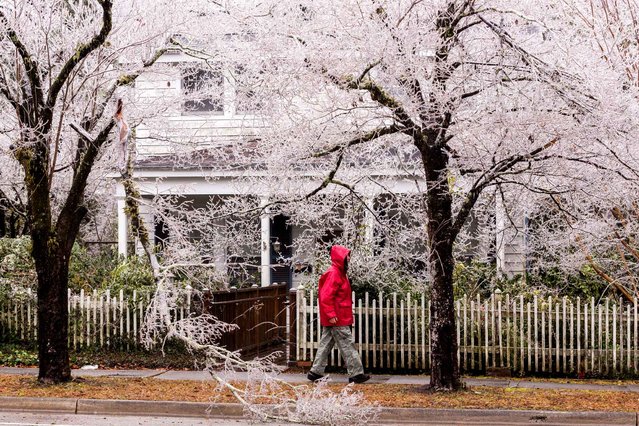 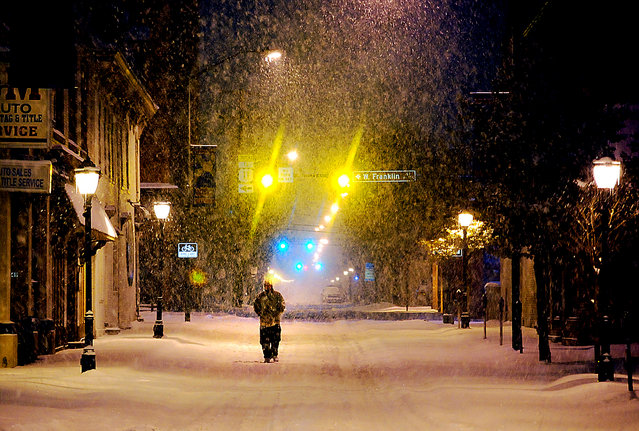 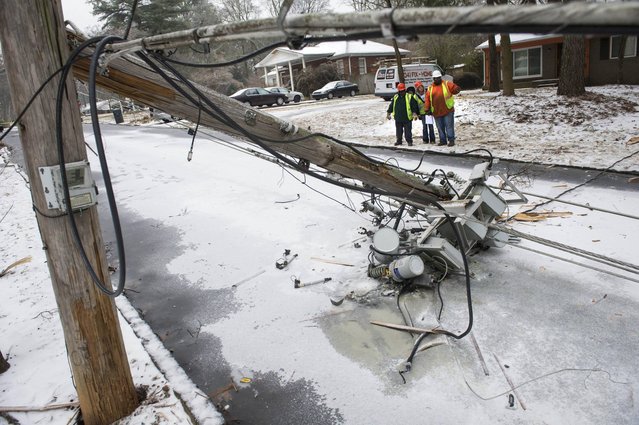 A crew asses the situation in front of a downed transformer smashed in the road during a winter storm on Wednesday, February 12, 2014, in Doraville, Ga. About 175,000 customers were without power Wednesday afternoon, power companies reported. (Photo by John Amis/AP Photo) 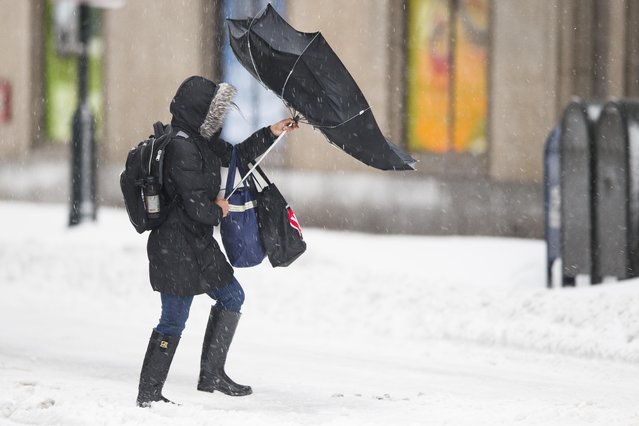 A woman's umbrella is turned inside-out by the wind as mixed winter precipitation falls Thursday, February 13, 2014, in Philadelphia. Snow and sleet are falling on the East Coast, from North Carolina to New England, a day after sleet, snow and ice bombarded the Southeast. (Photo by Matt Rourke/AP Photo)

Priscilla Hernandez , background in red, watches as a tow crew pulls her vehicle from the median on Hwy 70 near I-540 Thursday, February 13, 2014, in Raleigh, N.C., the day after she left it in a winter storm. The Triangle and the state were hit by a serious winter storm Wednesday, leaving hundreds of cars stuck or stranded on and along the roadways. Hernandez was happy they they removed her car without damage. (Photo by Chuck Liddy/AP Photo/The News & Observer) 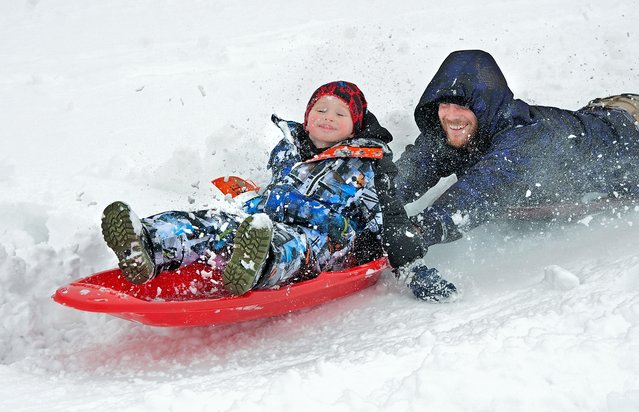 Kayden Vanbenschoten, 4, and his father Justin Edwards, enjoy a wild ride on their sleds at the bottom of a hill near the Turner Ashby High School practice fields, Thursday February 13, 2014 in Bridgewater. Winter Storm snow totals for the Central Shenandoah ranged from 10 to 14 inches with some isolated areas along the Blue Ridge Mountains reporting up to 17 inches. (Photo by Michael Reilly/AP Photo/Daily New-Record)
Edit Del
14 Feb 2014 09:20:00, post received 0 comments
Publication archive:
←   →
Popular tags:
All tags
Last searches: