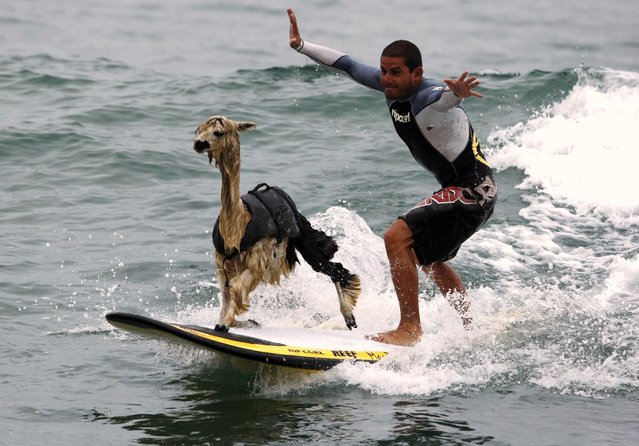 Peruvian surfer Domingo Pianezzi rides a wave with his alpaca Pisco at San Bartolo beach in Lima March 16, 2010. Pianezzi has spent a decade training dogs to ride the nose of his board when he catches waves, and now he is the first to do so with an alpaca. (Photo by Pilar Olivares/Reuters) 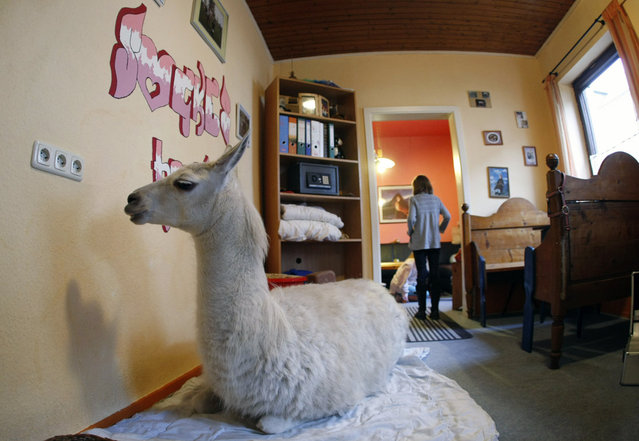 A three-year old llama “Socke” lies in a dining room in the western German town of Muelheim January 14, 2009. “Socke” has lived in the house of her owner Nicole Doepper since its birth, when it was injured by other animals and had a leg amputated. (Photo by Ina Fassbender/Reuters) 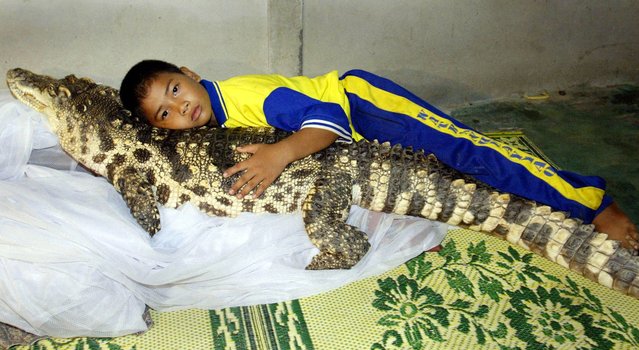 Wattana Thongjon, 10, lays in his bed alongside his pet crocodile “Kheng” at his home in Thailand's rural Phichit province August 28, 2002. Wattana's father Prayoon found the crocodile as a hatchling in a local pond three years ago and it has grown to over one-metre in length and weighs 40 kg (88 pounds). The croc is pampered with a diet of fresh chicken, has his sharp teeth brushed every day by Prayoon, and lives indoors with their two pet dogs. (Photo by Reuters) 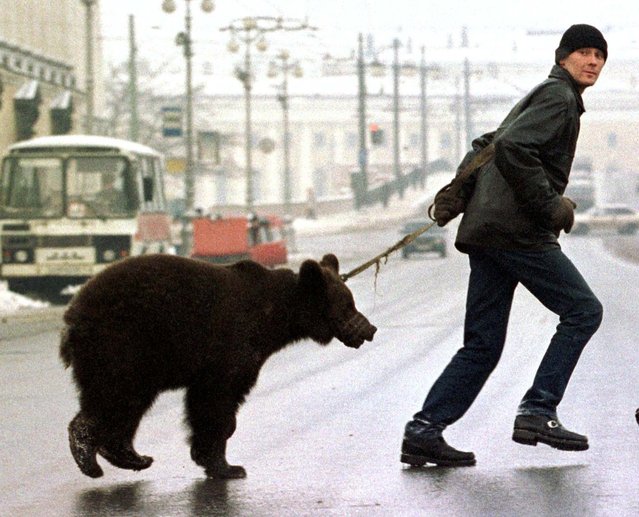 A man leads his pet bear across Nevsky Prospekt in St. Petersburg, Russia, looking for paying customers January 14, 1999. The animal owner claims 30 roubles ($1.50) from customers to be photographed with the bear. (Photo by Reuters) 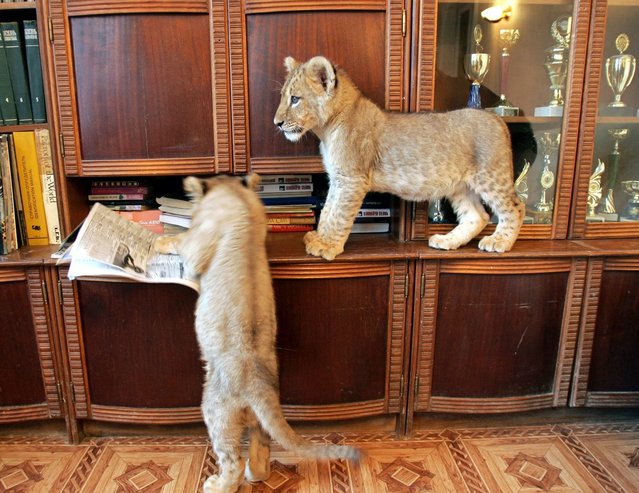 Two lion cubs play on top of furniture in a domestic house in Kharkov some 279.4 miles northeast of Kiev December 15, 2005. The three-months old lions live in the house of Tatyana Efremova, a veterinarian in Kharkov, who also keeps a number of other exotic animals. (Photo by Gleb Garanich/Reuters) 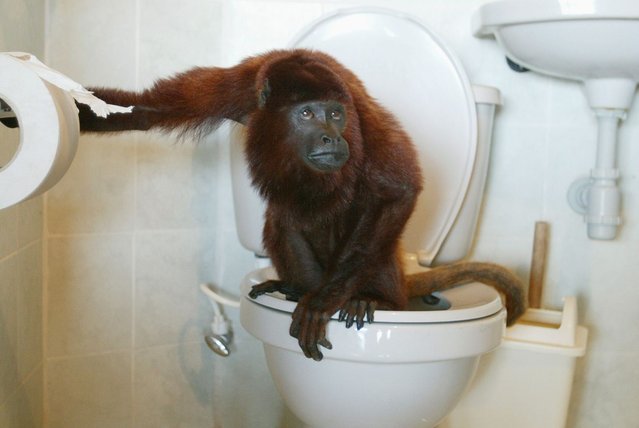 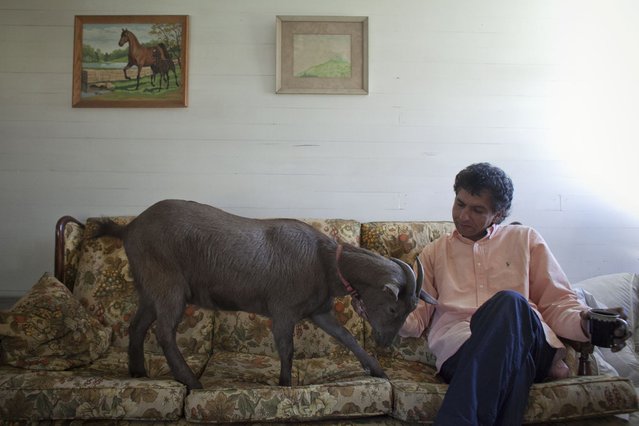 Cyrus Fakroddin and his pet goat Cocoa relax at their home in Summit, New Jersey April 7, 2012. (Photo by Allison Joyce/Reuters) 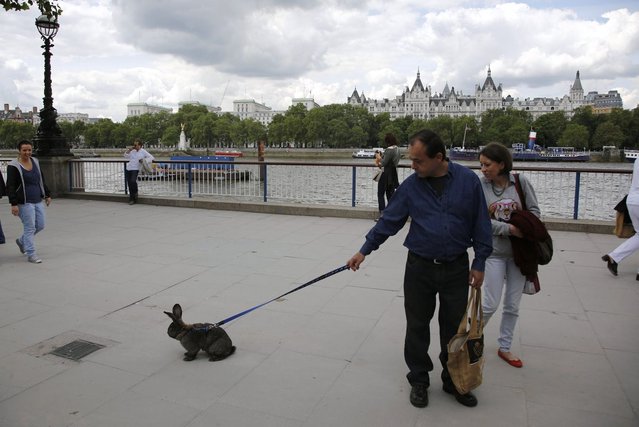 A couple take their pet rabbit for a walk on the South Bank of the Thames river in London July 21, 2012. (Photo by Chris Helgren/Reuters) 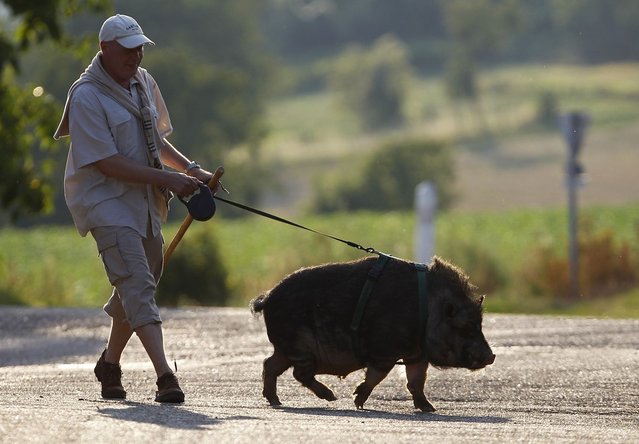 Christophe Lutz walks Marcel, a 30 month-old pig-wild boar crossbreed in the small village of Kolbsheim near Strasbourg, France on August 10, 2012. Marcel, an offspring of a sow and a wild boar, was raised by Christophe and his wife Chloe when he was 3 months-old, and neglected by its mother. (Photo by Vincent Kessler/Reuters) 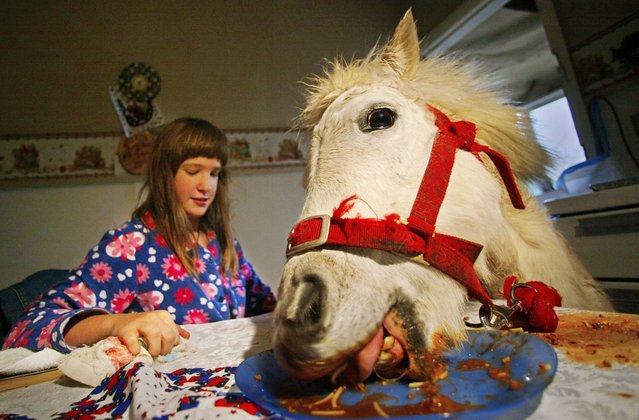 10-year-old Carissa Boulden watches her pet horse, named Princess, eat spaghetti bolognaise at the family's dining table at their home in Sydney, Australia on August 18, 2004. Princess, a Shetland pony, is given free run of the suburban Sydney house, eats with her owners at mealtimes and drinks beer every Sunday, but also provides therapy for Carissa who suffers cerebral palsy. (Photo by Tim Wimborne/Reuters) 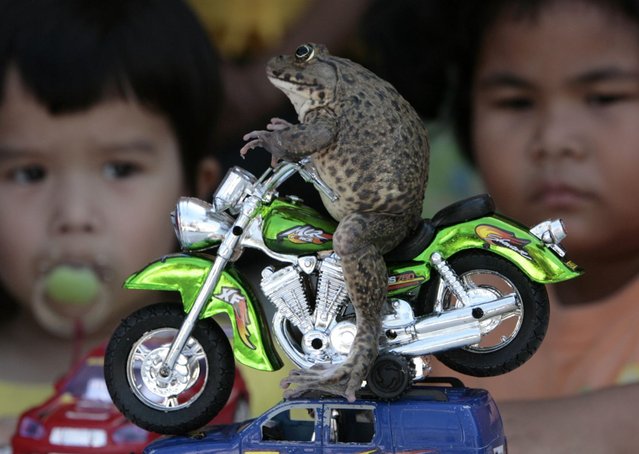 Oui the frog sits on a miniature motorcycle in the eastern beach town of Pattaya, Thailand on January 10, 2008. Tongsai Bamrungthai, the frog's owner, says Oui loves playing with human toys and posing for photographs. (Photo by Sukree Sukplang/Reuters) 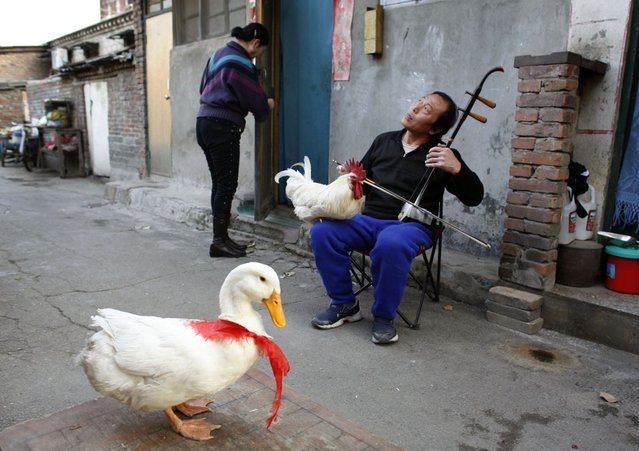 Xu Guoxing plays a traditional two-stringed Chinese fiddle with his pet rooster and duck in front of his home in a hutong area in Beijing, China on November 9, 2008. Guoxing owns “Baibai”, a 6-year-old rooster and “Yaya”, a 4-year-old duck. Every day plays music for them and trains them to jump, nod, and for Baibai, crow on command. (Photo by Reinhard Krause/Reuters) 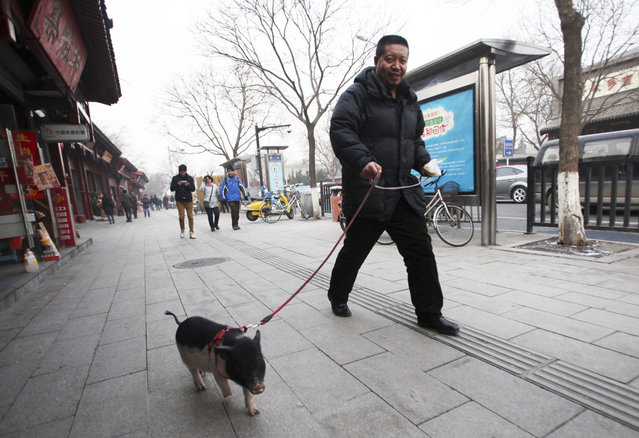 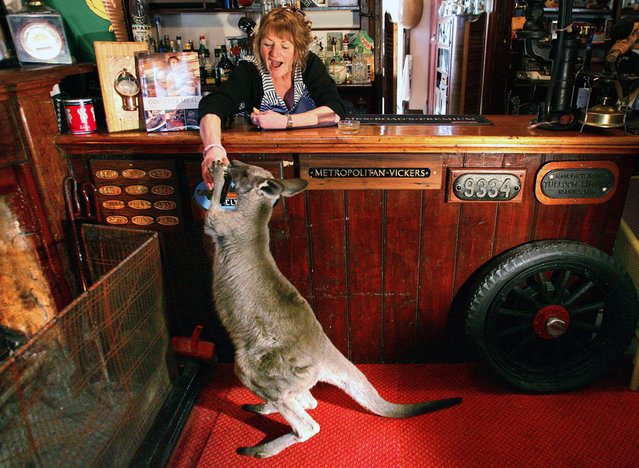 “Boomer” the kangaroo grabs can of beer held by Kathy Noble as she stands behind the bar at the 127-year-old Comet Inn in township of Hartley Vale, Australia on August 11, 2005. The 18-month-old orphaned kangaroo was raised by Noble after it was found in the pouch of its dead mother on the side of the road, and started coming into the bar after he was accidentally let inside by a guest. (Photo by David Gray/Reuters) 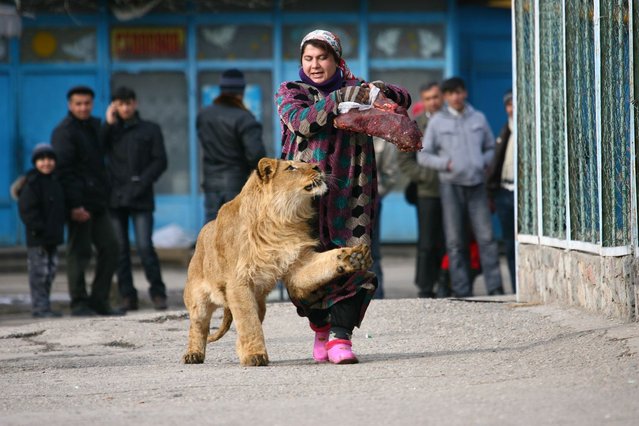 Zukhro, an employee of a Russian city zoo, walks with Vadik, an 18-month-old male lion. (Photo by Reuters) 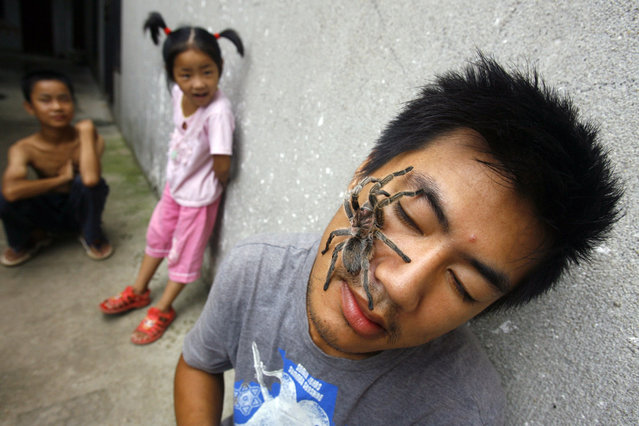 A Chilean rose tarantula walks over the face of Zhao Jing on a street in Wuhan, Hubei province, China on July 30, 2009. Zhao, 26, a Zoo feeder, keeps tarantulas, scorpions and pythons as pets. (Photo by Reuters) 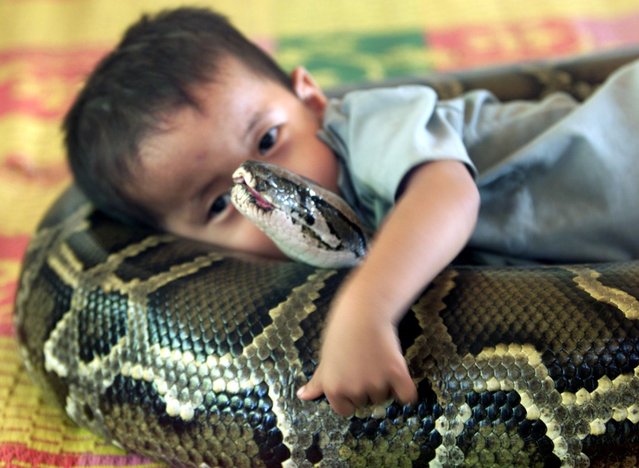 Dah, a small child laying with a 13 foot long python, how sweet. (Photo by Reuters) 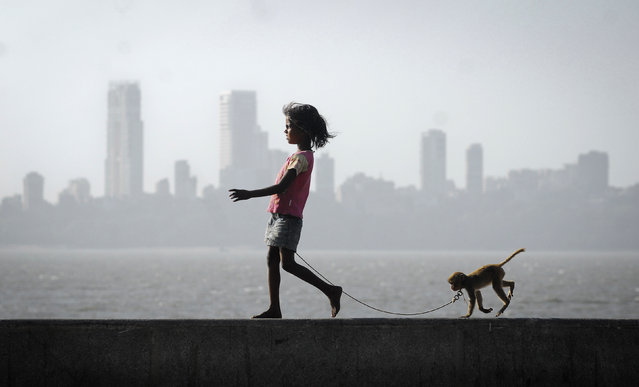