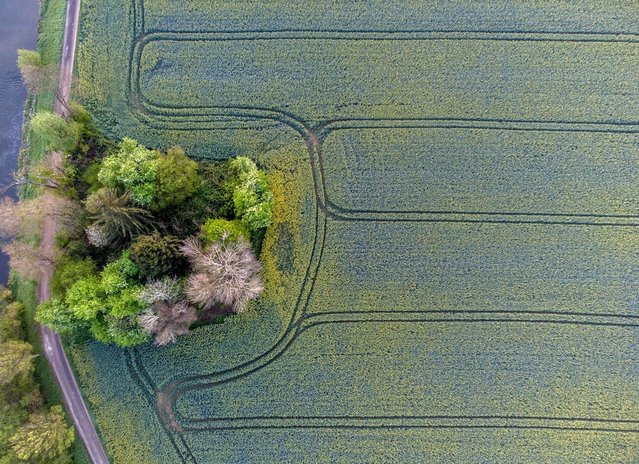 Trees stand next to still green rape field in Frankfurt, Germany, Friday, April 30, 2021. The April is considered to be the coldest one since 30 years. (Photo by Michael Probst/AP Photo) 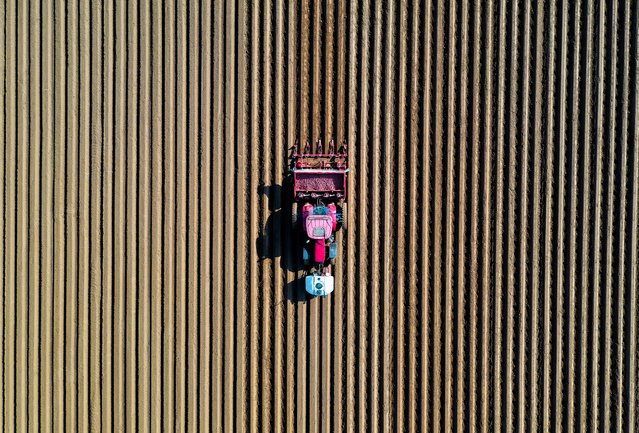 A farmer drives a tractor in his field while planting potatoes in Tilloy-lez-Cambrai, near Cambrai, France, April 18, 2021. Picture taken with a drone. (Photo by Pascal Rossignol/Reuters) 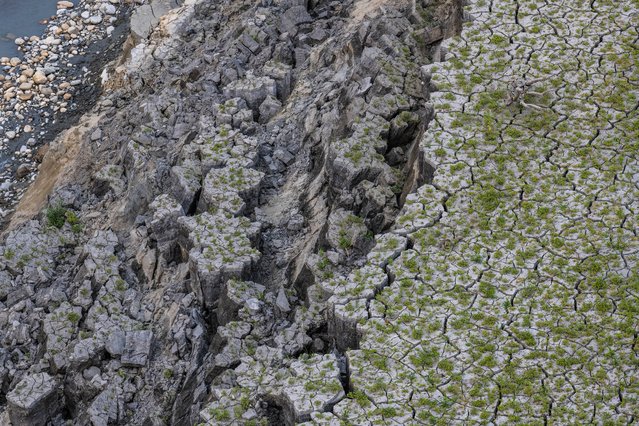 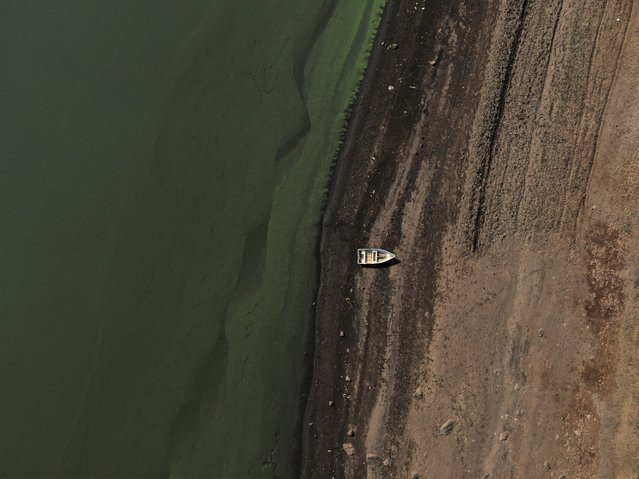 A boat sits idle on the banks of Villa Victoria Dam, the main water supply for Mexico City residents, on the outskirts of Toluca, Mexico, Thursday, April 22, 2021. The mayor of Mexico City said the drought was the worst in 30 years, and that problem can be seen at the series of reservoirs that bring in water from other states to supply the capital. (Photo by Fernando Llano/AP Photo) 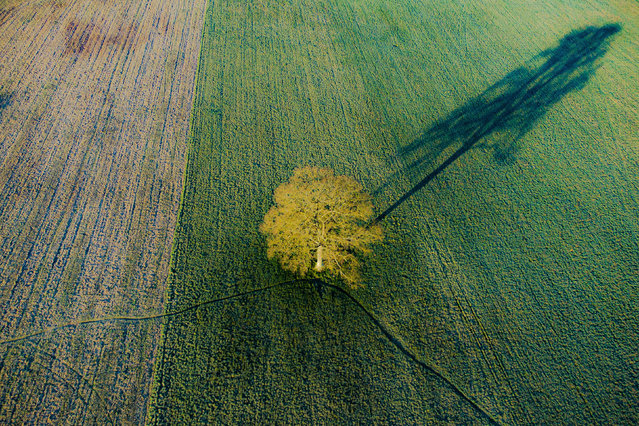 The rising sun illuminates a tree in a frosty field near Newbury, United Kingdom on April 15, 2021. (Photo by Ben Birchall/PA Images via Getty Images) 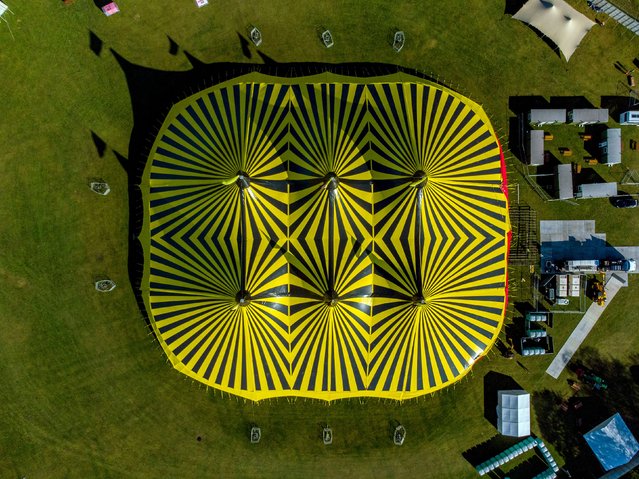 The Big Tent in Sefton Park, Liverpool on April 29, 2021. Indie band The Blossoms are to headline a pilot show on Sunday the first concert with no social distancing measures or facemasks needing to be worn following the further easing of lockdown restrictions in England. (Photo by Peter Byrne/PA Images via Getty Images) 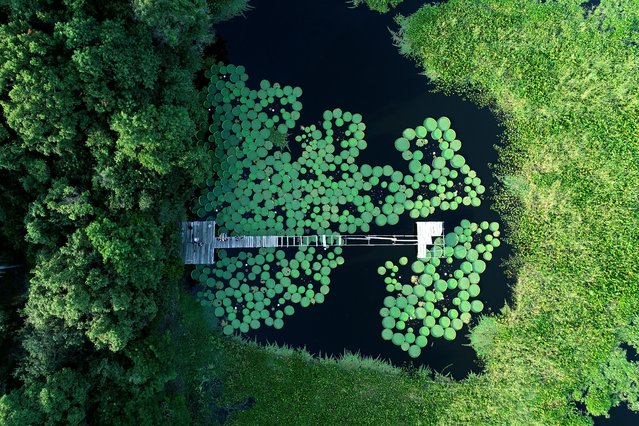 An aerial view of Cerro Lagoon on April 13, 2021 in Limpio, Paraguay. In 2020, Cerro Lagoon had turned pink due to pollution generated by waste dropped by tannery WalTrading SA. After local residents protested, Ministry of the Environment and Sustainable Development of Paraguay took action and ordered the company to cease activities. The situation gain public visibility after American actor Leonardo Di Caprio shared pictures on his social media accounts. Now the lagoon is regenerating naturally: Victoria cruziana water lilies are seen again and water returns to its original green color. (Photo by Juan Carlos Meza/Getty Images) 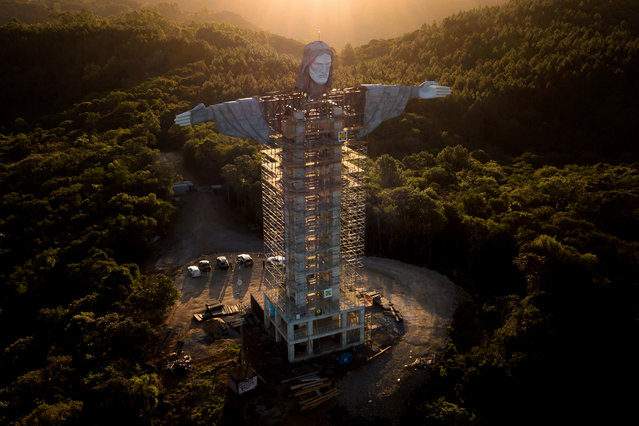 Aerial view of the Christ The Protector Statue and the Valle de Taquari on April 20, 2021 in Encantado, Brazil. The statue being built in Encantado, southern Brazil, will surpass the iconic Christ The Redeemer of Rio de Janeiro by seven meters. Made of steel and concrete, it will stand 43 meters including its pedestal, and become the third-tallest statue of Jesus Christ in the world. (Photo by Buda Mendes/Getty Images) 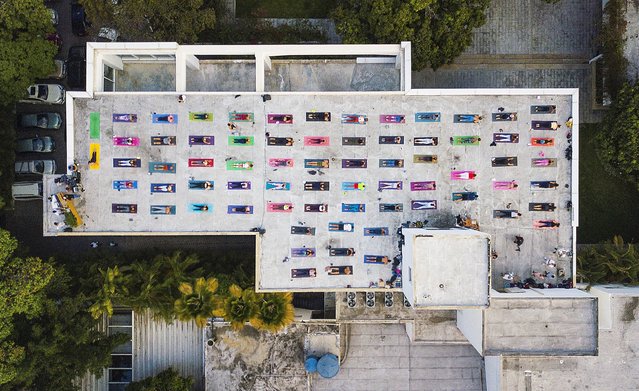 Enthusiasts practice yoga, keeping a social distance as a precaution during the COVID-19 pandemic, at a rooftop in Caracas, Venezuela, Wednesday, April 21, 2021. (Photo by Matias Delacroix/AP Photo) 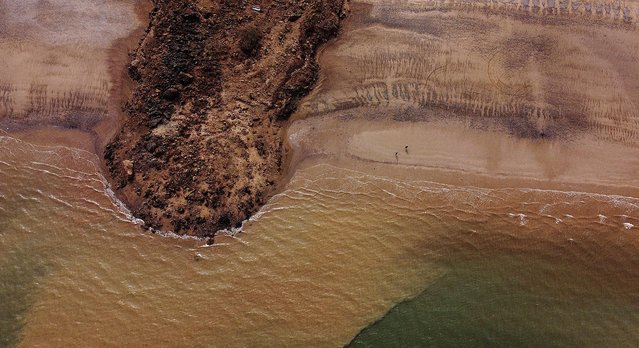 Rockfall is seen on a beach after a cliff collapsed in the village of Nefyn, Wales, Britain, April 20, 2021. (Photo by Carl Recine/Reuters) 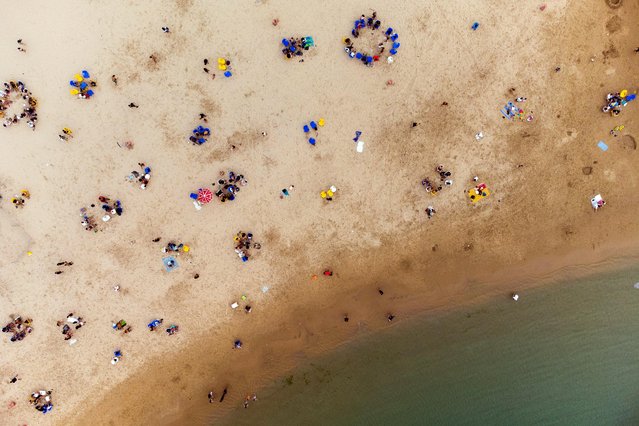 Israelis enjoy the beach of the Mediterranean during a heat wave as coronavirus disease (COVID-19) restrictions ease around the country, in Ashkelon Israel April 19, 2021. Picture taken with a drone. (Photo by Amir Cohen/Reuters) 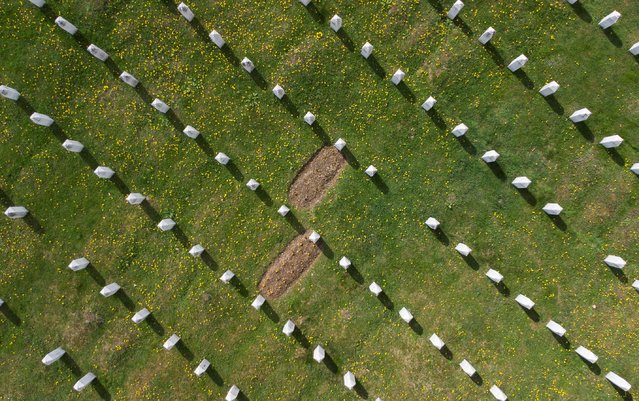 An aerial view of the Srebrenica-Potocari Genocide Memorial Center in Bosnia and Herzegovina on April 16, 2021. (Photo by Dado Ruvic/Reuters) 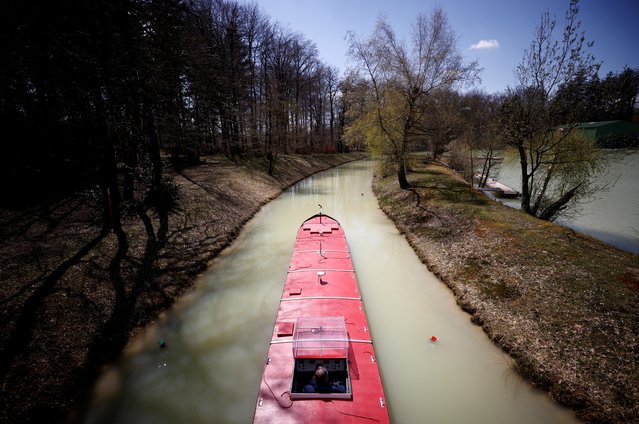 Francois Mayor, managing director of Port Revel, steers a scaled-down model of a tanker, named the Brittany, on a miniaturized stretch of the Suez Canal at the Port Revel Shiphandling Training Centre in Saint-Pierre-de-Bressieux, France, April 19, 2021. (Photo by Stephane Mahe/Reuters) 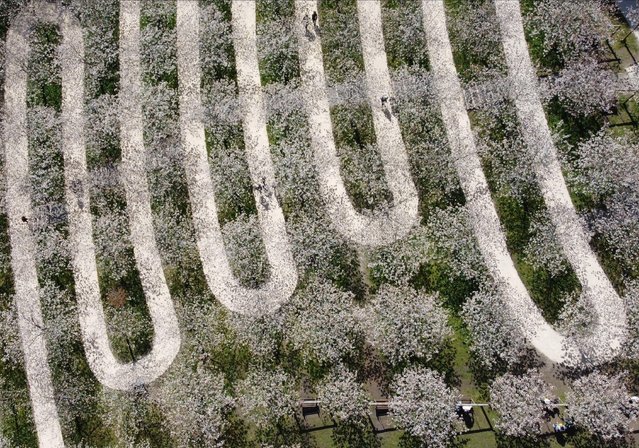 People walk at the Taihaku Cherry Orchard at the Alnwick Gardens, which has the largest collection of Taihaku in the world, comprising of 329 trees, in Alnwick, Northumberland, Britain on April 21, 2021. (Photo by Lee Smith/Reuters) 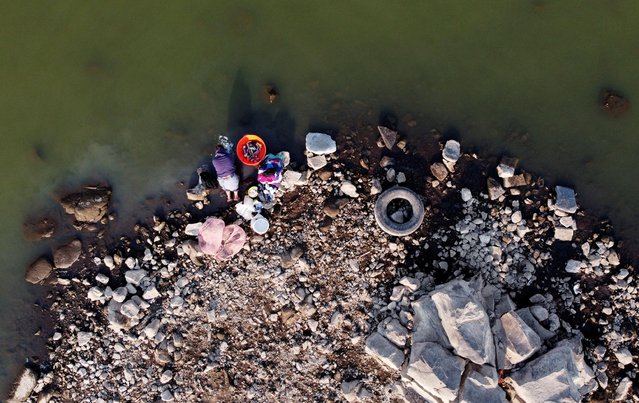 A woman washes clothes on the shore of Villa Victoria Dam, part of the Cutzamala System collecting water for distribution into Mexico City and the metropolitan area as it is running out of water as drought takes hold of the city of almost 22 million people, in Villa Victoria, State of Mexico, Mexico April 21, 2021. (Photo by Carlos Jasso/Reuters) 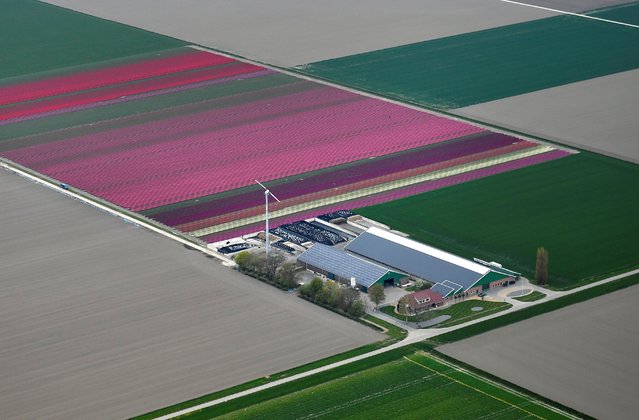 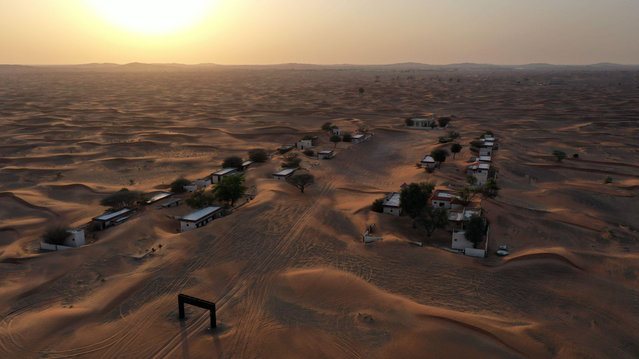 An aerial view shows the abandoned village of Al-Madam, bordering the Gulf Emirate of Sharjah, half buried in the desert sand, on April 22, 2021. (Photo by Giuseppe Cacace/AFP Photo) 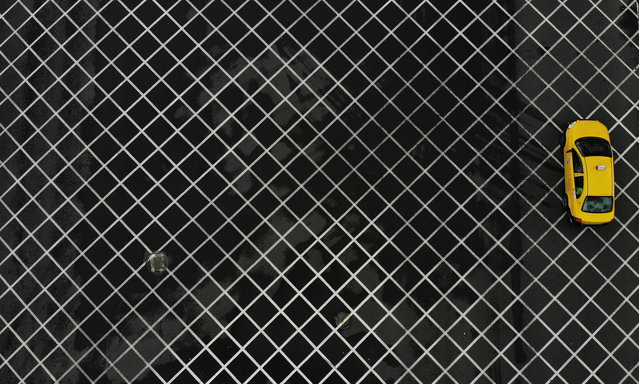 Aerial view of the north to Quito during the weekend lockdown imposed by the government on April 24, 2021 in Quito, Ecuador. Ecuador's government imposed a weekend lockdown and a night-time curfew in 16 provinces under a state of emergency to curb the spread of COVID-19. (Photo by Franklin Jácome/Agencia Press South/Getty Images)
Edit Del
05 May 2021 09:19:00, post received 0 comments
Publication archive:
←   →
Popular tags:
All tags
Last searches: