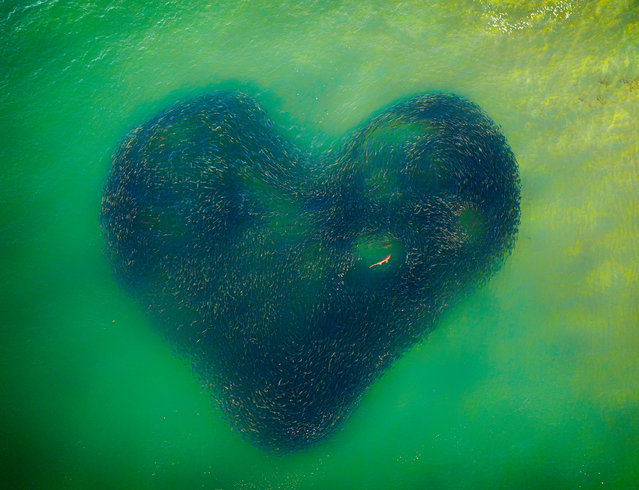 Love Heart of Nature by the Australian photographer Jim Picôt is the Drone Awards 2020 overall winner. The shot immortalises a salmon school in New South Wales, forming the shape of a heart with a shark swimming inside it. (Photo by Jim Picôt/Drone Awards 2020) 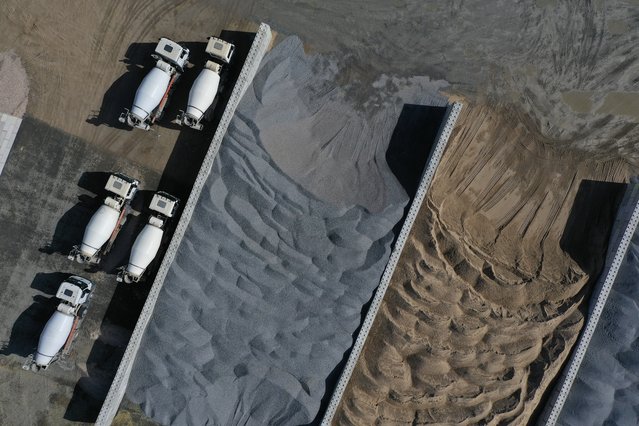 In this aerial view from a drone, cement trucks stand parked next to piled sand and gravel at the construction site of the new Tesla Gigafactory stands near Berlin on September 06, 2020 near Gruenheide, Germany. Tesla is planning to begin electric car production at the site by the summer of 2021 with 12,000 employees and an output of at least 100,000 cars annually. (Photo by Sean Gallup/Getty Images) 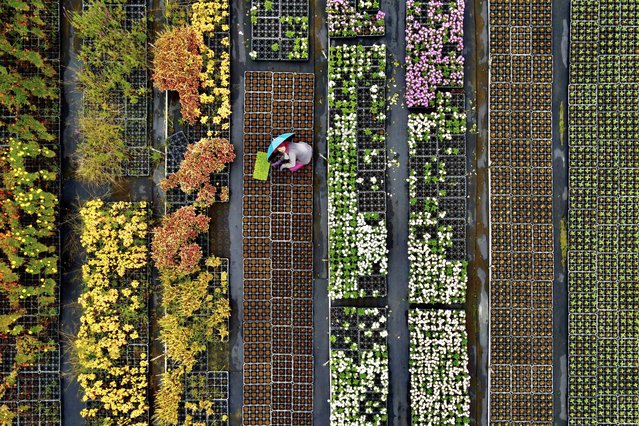 This aerial view shows a farmer sorting potted plants in the Daxi district of the northern city of Taoyuan on September 10, 2020. (Photo by Sam Yeh/AFP Photo) 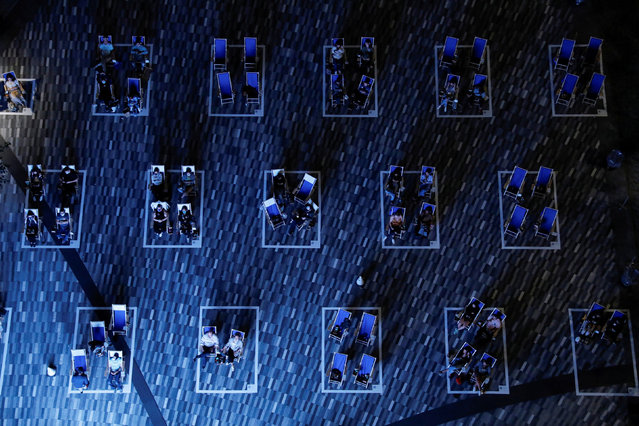 People are seen seated in outlined sections, created to promote social distancing as an attempt to fight the spread of the coronavirus disease (COVID-19), while viewing a screening as part of Movie Nights with Tribeca Film Festival at the Backyard at Hudson Yards in Manhattan, New York City, U.S., September 26, 2020. (Photo by Andrew Kelly/Reuters) 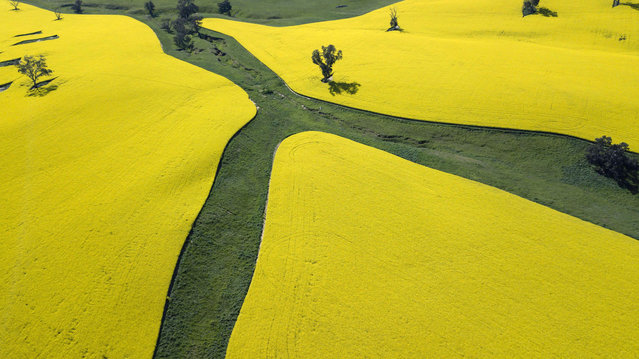 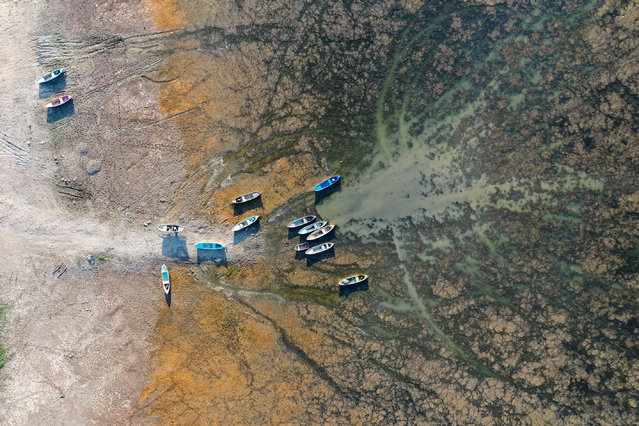 A drone photo shows an aerial view of boats and Lake Marmara as water level dropped to 1.5 percent due to irrigation for agriculture and hot weather of summer season in the area between Salihli district and Golmarmara district in Manisa province of Turkey on September 08, 2020. The water level in Lake Marmara, which provides annually an average of 150 million cubic meters of water to the Gediz Plain, has dramatically dropped and it is estimated that 20 million cubic meters of water left. The depth in the lake decreased to 50 centimeters. Falling Lake Marmara water level, also negatively affected the residents of the neighborhood who make a living by fishing. (Photo by Ahmet Bayram/Anadolu Agency via Getty Images) 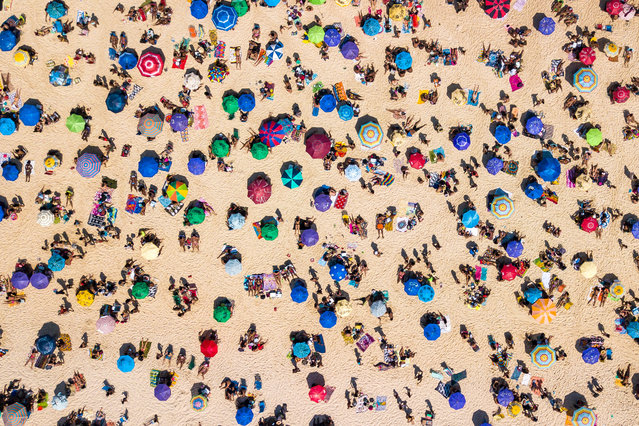 An aerial view of people enjoying the weather at Ipanema Beach on September 6, 2020 in Rio de Janeiro, Brazil. Residents of Rio de Janeiro and tourists disrespected the rules of the city and occupied the sands of the beaches. A municipal decree cleared beach vendors and permitted bathing in the sea. However, the use of chairs and tents on the sand is still prohibited. (Photo by Buda Mendes/Getty Images) 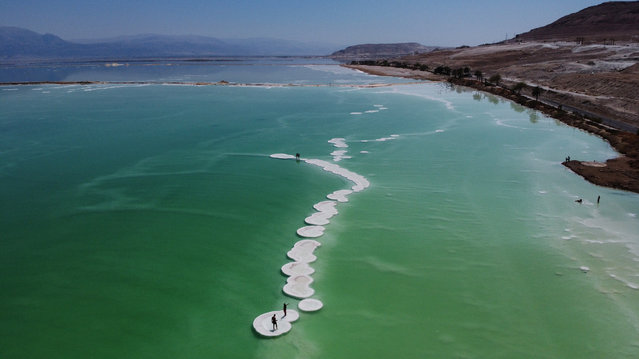 An aerial view shows beach-goers and salt formations in the Dead Sea near Ein Bokeq, Israel on August 25, 2020. (Photo by Ammar Awad/Reuters) 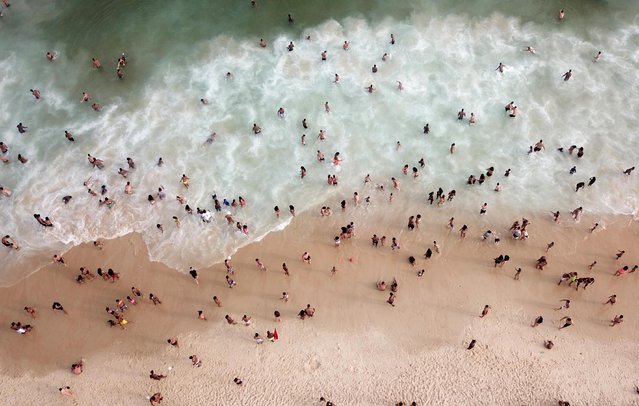 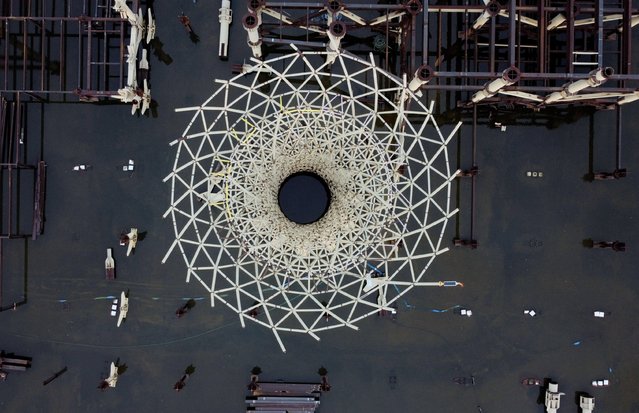 A general view shows parts of flight terminal on abandoned construction of a Mexico City airport that was scrapped two years ago is now flooded by summer rains, in Texcoco on the outskirts of Mexico City, Mexico on September 4, 2020. (Photo by Carlos Jasso/Reuters) 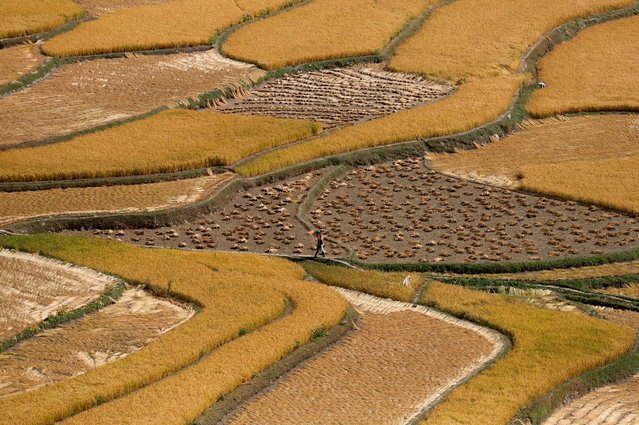 A woman carrying a basket walks through a rice field in south Kashmir's Tral town, September 24, 2020. (Photo by Danish Ismail/Reuters) 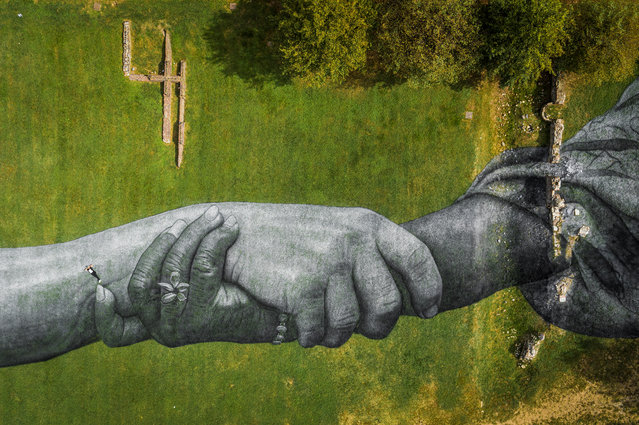 An aerial picture taken with a drone shows French artist Saype posing by his giant biodegradable land art painting of interlocked hand, as part of “Beyond Walls”, his project creating a spray-painted “human chain” across the world to encourage humanity and equality, by the ancient Palatine Gate in Turin, Italy, September 29, 2020. (Photo by Valentin Flauraud for Saype/Handout via Reutsr) 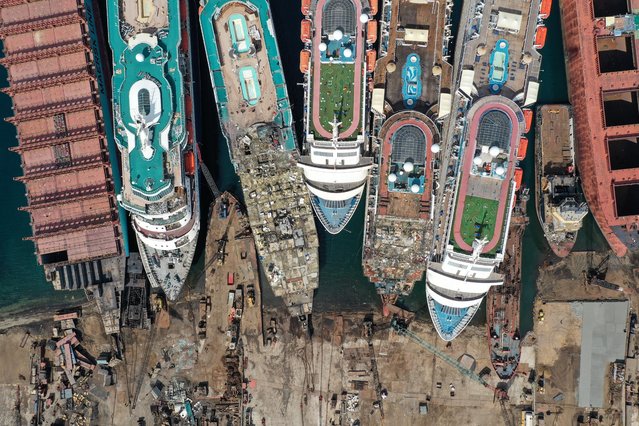 A drone image shows decommissioned cruise ships being dismantled for scrap metal sales after the COVID-19 pandemic all but destroyed the industryat Aliaga ship-breaking yard in the Aegean port city of Izmir, western Turkey, October 2, 2020. (Photo by Umit Bektas/Reuters) 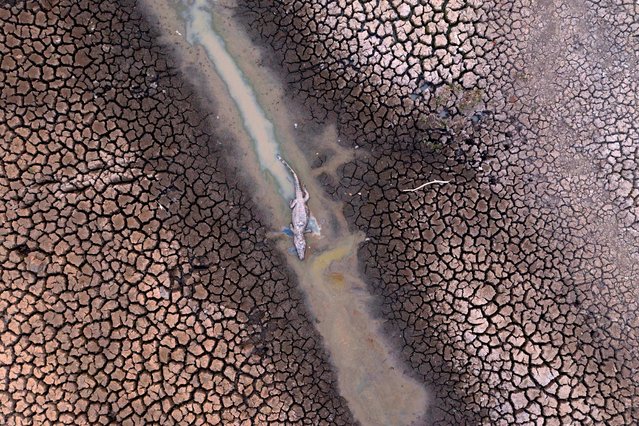 A dead alligator is seen at the wetland of Pantanal at the Transpantaneira park road at the Mato Grosso state, Brazil, on September 12, 2020. Pantanal is suffering its worst fires in more than 47 years, destroying vast areas of vegetation and causing death of animals caught in the fire or smoke. (Photo by Mauro Pimentel/AFP Photo) 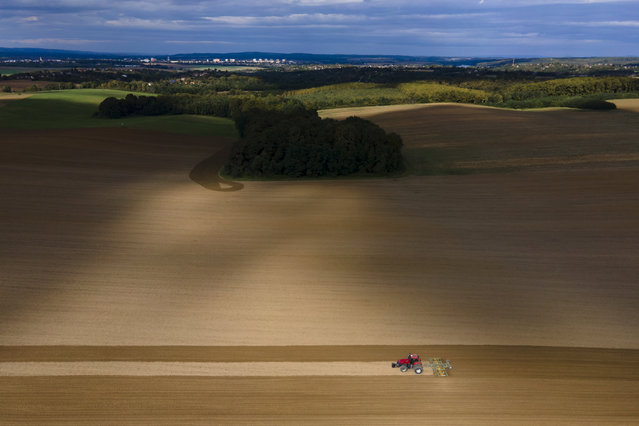 A cultivator is used to loosen the soil and prepare it for autumn sowing near the Miklosfa district of Nagykanizsa, Hungary, 30 September 2020. (Photo by Gyorgy Varga/EPA/EFE) 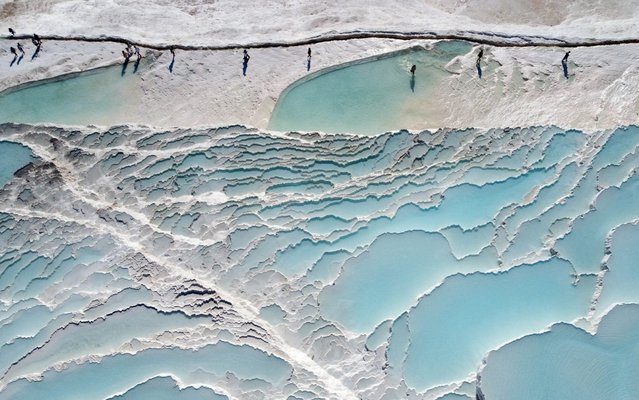