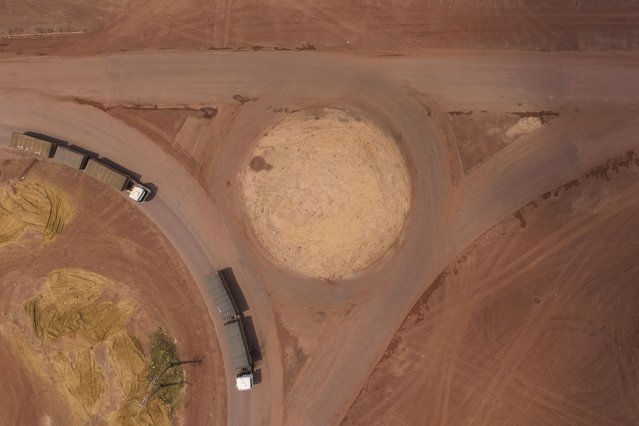 In this November 29, 2019 file photo, cargo trucks turn off the Trans-Amazon highway, top, onto route BR-163 in Campo Verde, near Itaituba, Para state, Brazil. Carved through jungle during Brazil's military dictatorship in the 1970s, the roads were built to bend nature to man's will in the vast hinterland. Four decades later, there's development taking shape, but also worsening deforestation. (Photo by Leo Correa/AP Photo/File) 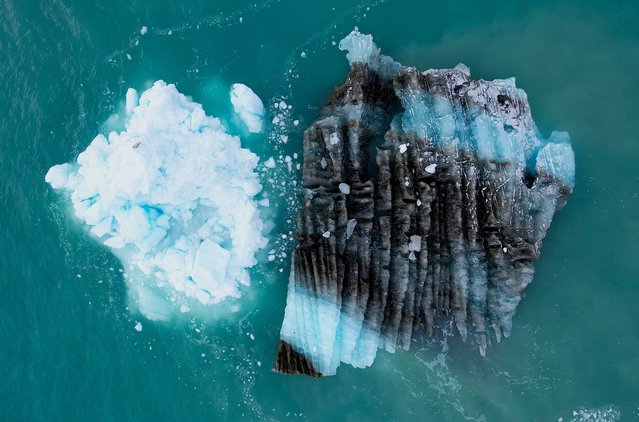 Ice swims in front of the Eqi glacier in the north of Ilulissat, Greenland, September 15, 2021. (Photo by Hannibal Hanschke/Reuters) 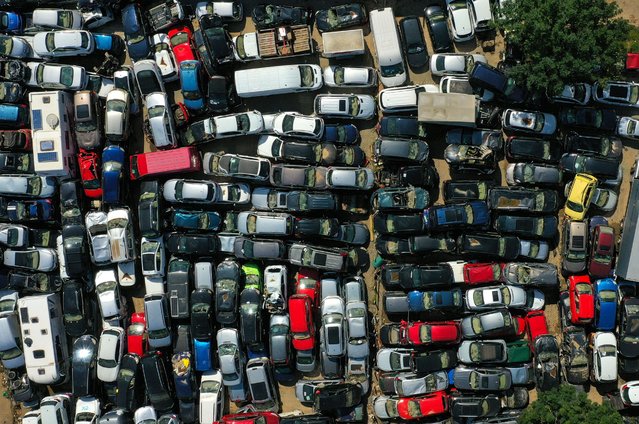 An aerial view shows cars damaged by the floods at a collection point in Bad Neuenahr, western Germany on August 25, 2021, weeks after heavy rain and floods caused major damage in the Ahr region. (Photo by Ina Fassbender/AFP Photo) Vicky the Viking, left, and his father Halvar are cut in a cornfield labyrinth in the outskirts of Frankfurt, Germany, Monday, September 6, 2021. Vicky and Halvar are based on the novel Vicke Viking (1963) written by the Swedish author Runer Jonsson. (Photo by Michael Probst/AP Photo) 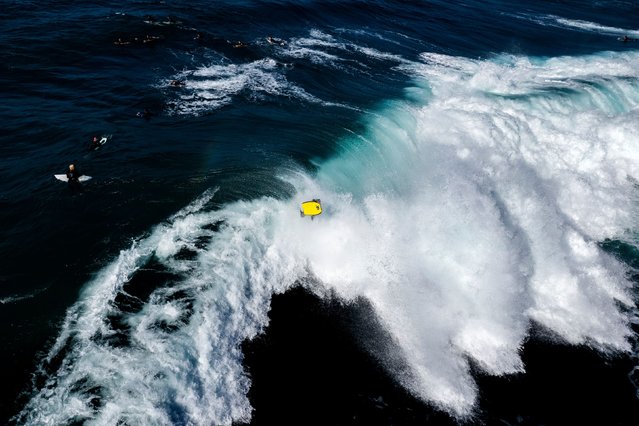 A surfer rides a wave at a break between Clovelly and Coogee on August 26, 2021 in Sydney, Australia. A large southerly swell continues to impact the NSW coast today, with the weather becoming fine after days of rain. (Photo by Brook Mitchell/Getty Images) 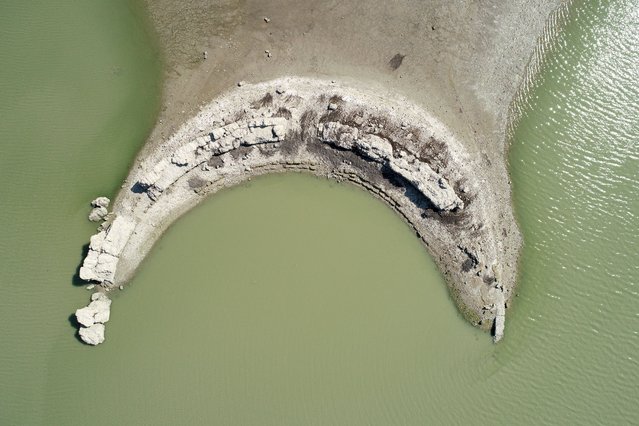 A drone photo shows an aerial view of a part of Augusta Ancient City, belonging to the Roman period, revealed following the withdrawal of water level of Seyhan Dam Lake, in Adana, Turkey on September 07, 2021. (Photo by Eren Bozkurt/Anadolu Agency via Getty Images) 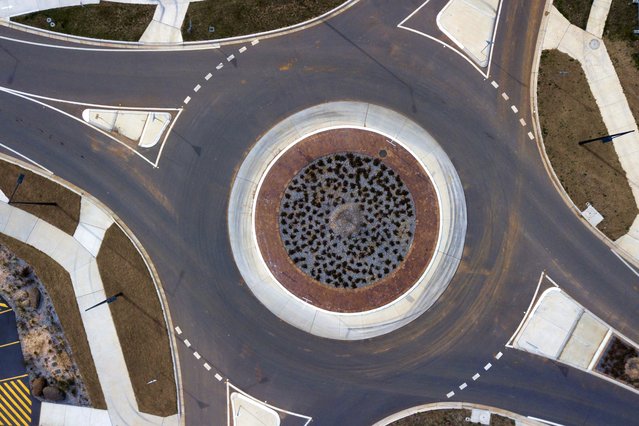 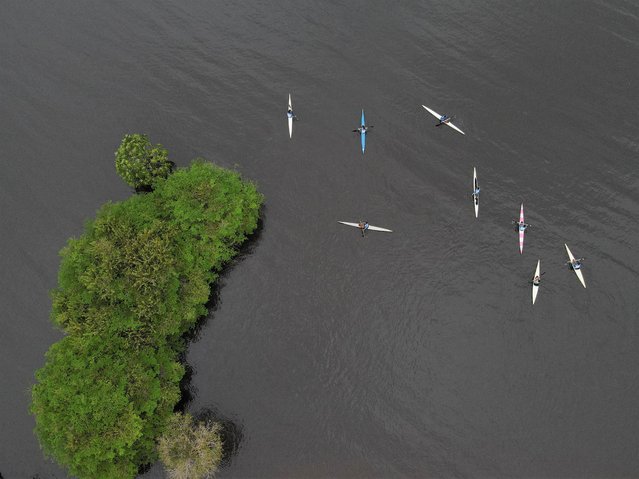 Ribeirinhos (river dwellers) and indigenous people of the Kambeba ethnic group, take part in a canoeing class as part of the Indigenous Canoeing project of the Brazilian Canoeing Confederation (CBCa) and the Sustainable Amazon Foundation (FAS) on Cueiras river, an affluent of the Negro River at Tres Unidos community in Manaus, Amazonas state, Brazil, August 13, 2021. (Photo by Bruno Kelly/Reuters) 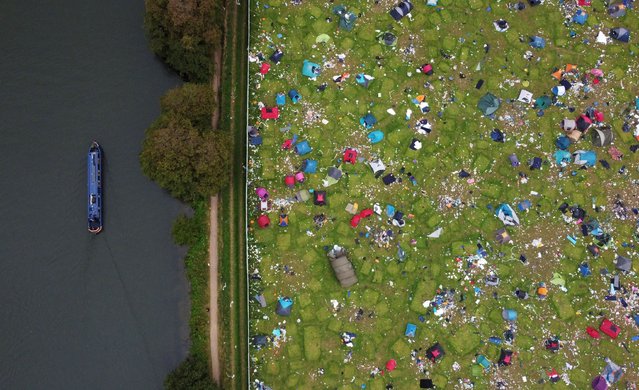 Abandoned tents are seen at the Reading Festival campsite after the event, in Reading, Britain, August 31, 2021. Picture taken with a drone. (Photo by Matthew Childs/Reuters) 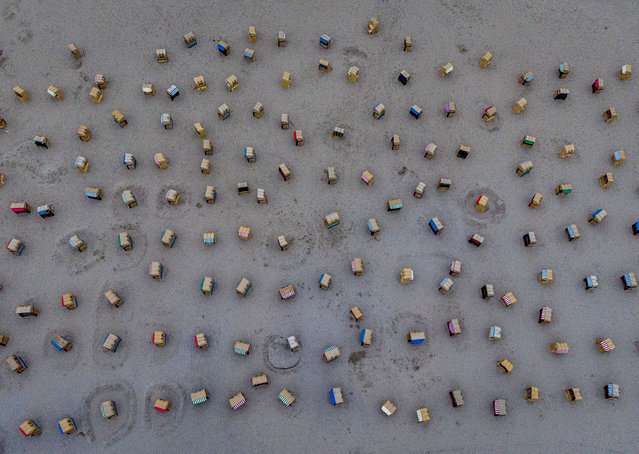 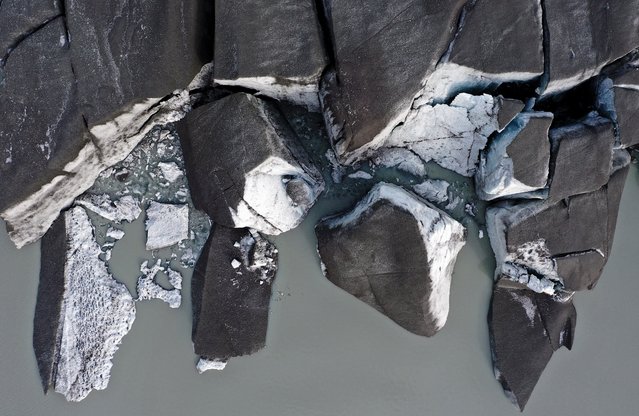 In an aerial view, broken off sections of ice from the retreating Russell Glacier rest in meltwater on September 08, 2021 near Kangerlussuaq, Greenland. 2021 will mark one of the biggest ice melt years for Greenland in recorded history. Researchers from Denmark estimated that in July of this year enough ice melted on the Greenland Ice Sheet to cover the entire state of Florida with two inches of water. According to NASA, 5 trillion tons of ice have melted in Greenland over approximately the past 15 years, enough to increase global sea level by nearly an inch. The observations come on the heels of the recent United Nations report on global warming which stated that accelerating climate change is driving an increase in extreme weather events. (Photo by Mario Tama/Getty Images) 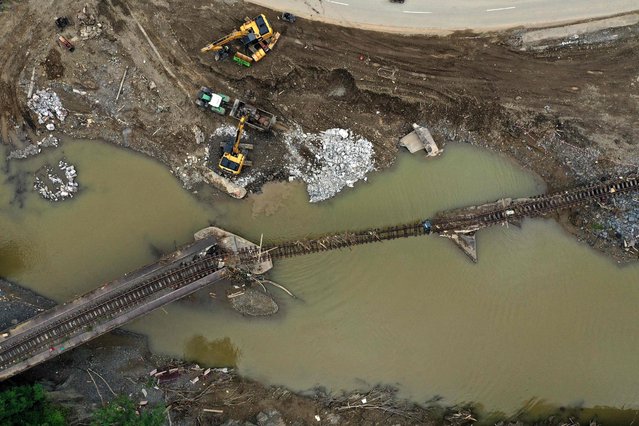 An aerial view shows railroad tracks destroyed by the flood in the wine village Rech near Dernau, Rhineland-Palatinate, western Germany, on August 19, 2021, weeks after heavy rain and floods caused major damage in the Ahr region. (Photo by Ina Fassbender/AFP Photo) 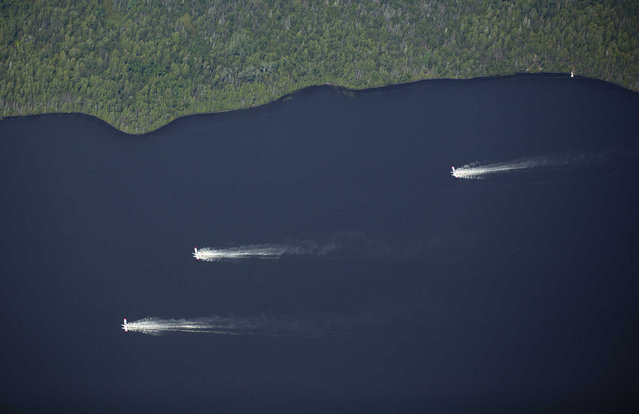 Aircrafts scoop up water from Sand Lake to drop onto the nearby Greenwood Fire, about 50 miles north of Duluth, Minn., Tuesday, August 17, 2021, as seen from an airplane above the temporary flight restriction zone. (Photo by Alex Korman/Star Tribune via AP Photo) 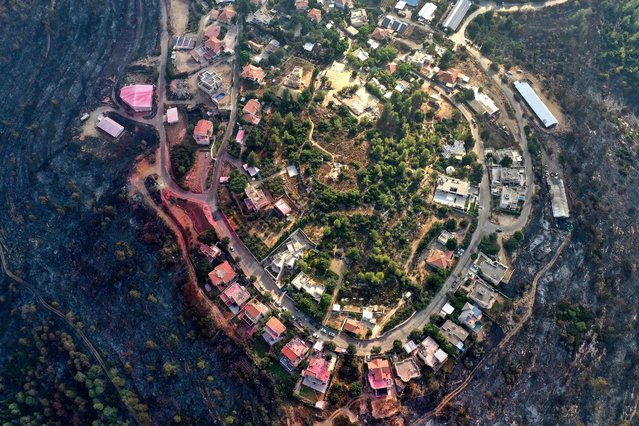 A picture taken on August 18, 2021 shows burned forests around the Givat Yearim moshav in the mountains some eight kilometres west of Jerusalem after wildfires that have ravaged woodland have finally been brought under control. Hundreds of families had been evacuated from 10 villages west of the city over the three days. The firefighters said there were no casualties, but the blazes burned 2,500 hectares of forest. (Photo by Menahem Kahana/AFP Photo) 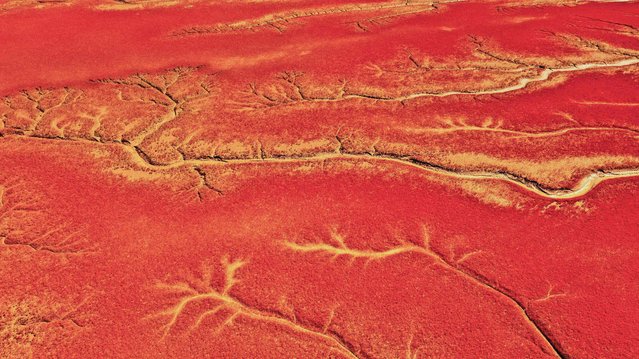