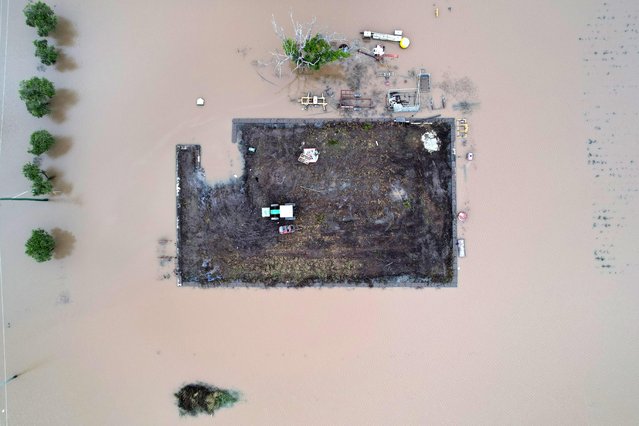 A tractor rests on a small paddock surrounded by floodwater on March 07, 2022 in Brisbane, Australia. Residents of northern New South Wales are still cleaning up following unprecedented storms and the worst flooding in a decade. (Photo by Dan Peled/Getty Images) 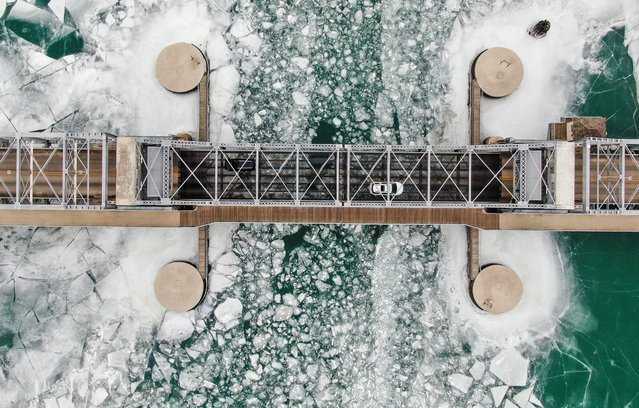 An aerial photo made with a drone shows ice formations under the Michigan Street Bridge in Sturgeon Bay, Wisconsin, 02 February 2022. According to The Great Lakes Integrates Science and Assessments team, the US Great Lakes waters are warming at a greater rate than regional atmospheric temperatures and the loss of winter ice is a major factor. Profound impacts from the loss of ice cover a range from increased severity of lake-effect precipitation, lake stratification, plankton production, and fish egg protection, among others. (Photo by Tannen Maury/EPA/EFE) 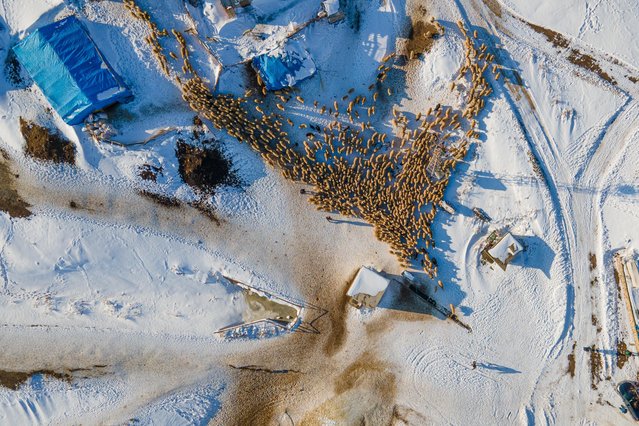 A drone photo shows flock of sheep taken out for grazing on a winter day in Tercan district of Turkiye's eastern Erzincan province on January 28, 2022. (Photo by Ali Mermertas/Anadolu Agency via Getty Images) 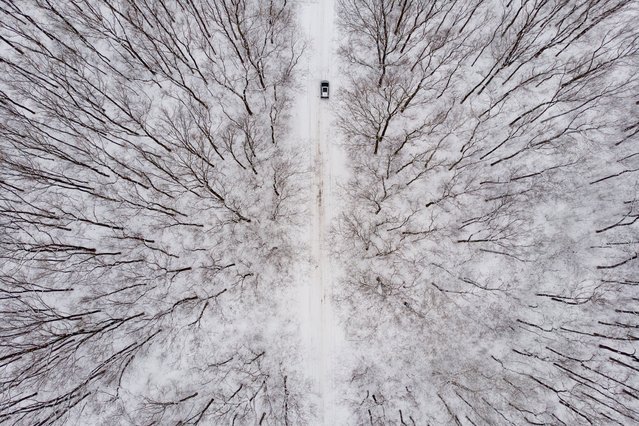 An aerial photo taken with a drone shows a car driving through a snow covered landscape near Debrecen, Hungary, 02 February 2022. (Photo by Zsolt Czegledi/EPA/EFE) 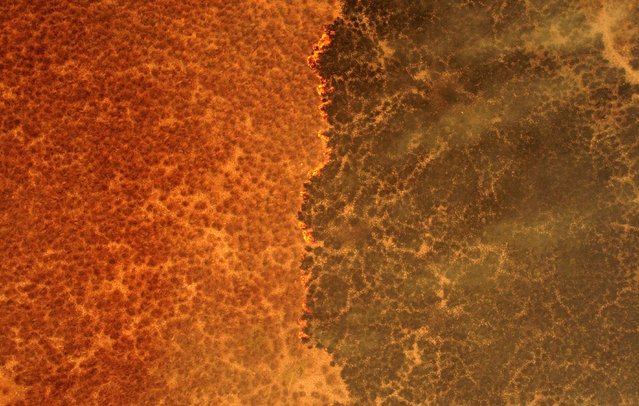 A wildfire that has spread to cover more than 500,000 hectares underscoring the impact of dry weather due to the Nina weather pattern, is seen in Corrientes, Argentina, February 15, 2022. (Photo by Sebastian Toba/Reuters) 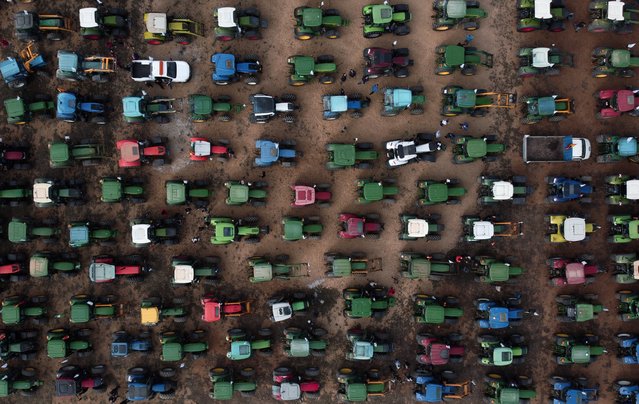 In this aerial photo farmers' tractors gather during a demonstration to demand fairer prices for their produce on March 3, 2022 in Antequera, Spain. (Photo by Jorge Guerrero/AFP Photo) 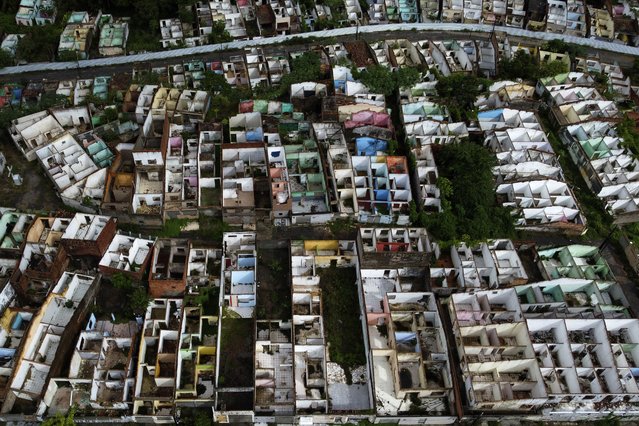 Homes stand abandoned in Maceio, Alagoas state, Brazil, Sunday, March 6, 2022. The homes have been abandoned because of the threat of ground subsidence caused by the Braskem mine that has forced more than 55 thousand people from their homes. (Photo by Eraldo Peres/AP Photo) 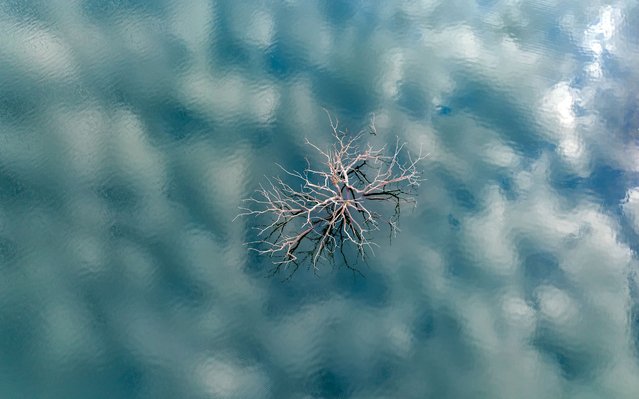 A tree is photographed emerged due to drought at the Lindoso reservoir, in northwestern Spain, Saturday, February 12, 2022. Large sections of Spain are experiencing extreme or prolonged drought, with rainfall this winter at only one-third of the average in recent years. (Photo by Emilio Morenatti/AP Photo) 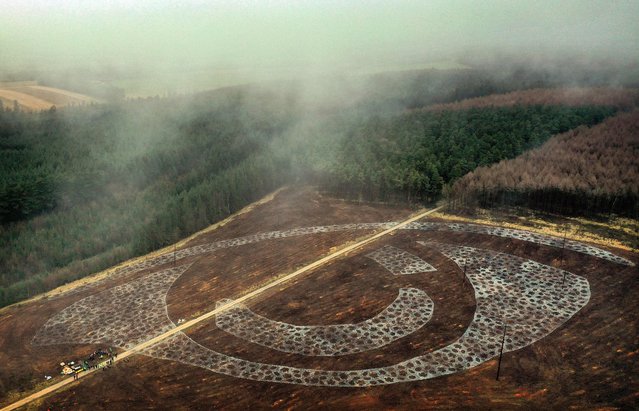 An aerial view shows the layout for the planting of trees in the shape of an eye, to create “The Forest Eye”, set to be the largest living forest feature in England, in Dalby Forest near Scarborough, north east England, on February 8, 2022. 5,000 beech, alder and maple trees, were on Tuesday to be planted in the shape of a child's eye to create a the largest living forest feature in England – an initiative by Forestry England, arts organisation Sand In Your Eye and the Environment Agency – and will be visible from the air in six years' time as the trees mature and are managed as an integral part of Dalby Forest. (Photo by Paul Ellis/AFP Photo) 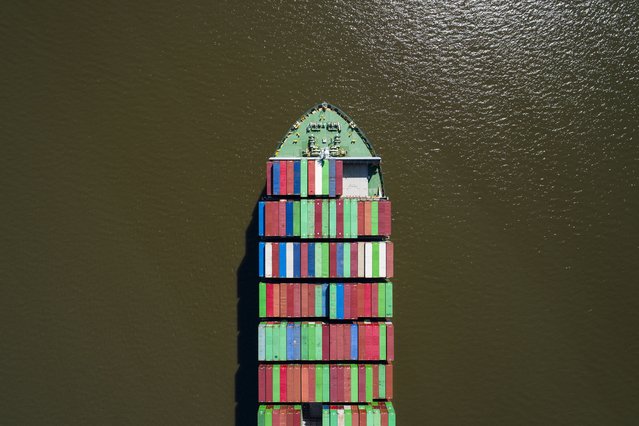 An image made with a drone shows the 1,100-foot container ship Ever Forward (IMO 9850551), which remains run aground in the Chesapeake Bay two miles offshore of Arcadia, Maryland, USA, 15 March 2022. Nearly a year ago its sister ship, Ever Given, got stuck in the Suez Canal, blocking ship traffic for almost a week. (Photo by Jim Lo Scalzo/EPA/EFE) 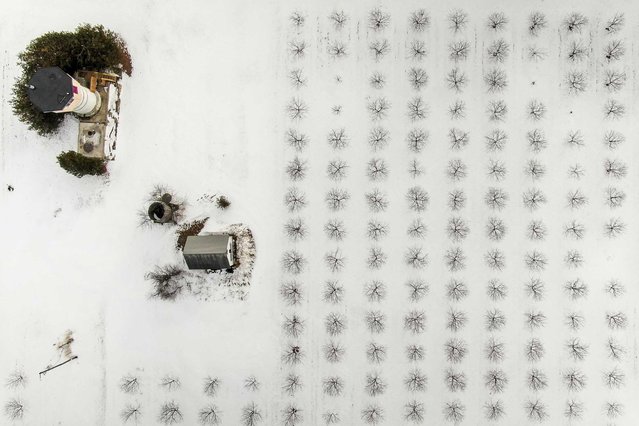 An aerial photo made with a drone shows trees in a snow covered field near Jacksonport, Wisconsin, 02 February 2022 (issued 03 February.) Much of the central and eastern US have been in the grip of a cold weather systems that have kept temperatures well below freezing. (Photo by Tannen Maury/EPA/EFE) 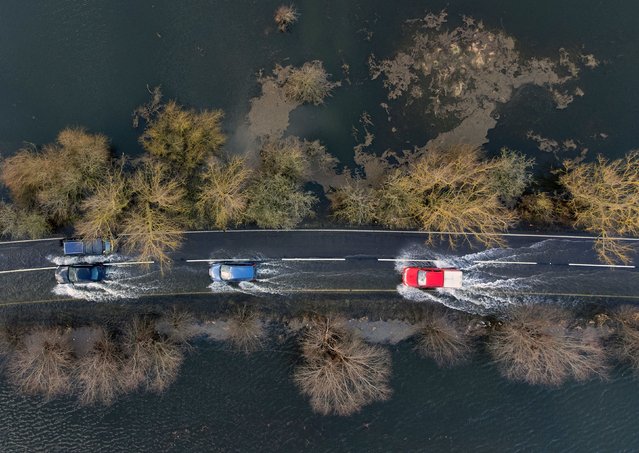 Cars make their way along the flooded A1101 in Welney in Norfolk, United Kingdom on Sunday, March 6, 2022. (Photo by Joe Giddens/PA Images via Getty Images) 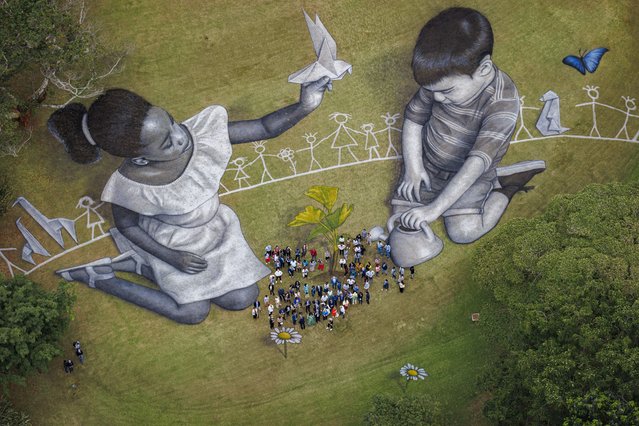 Swiss-French artist Saype (Guillaume Legros) works on his giant ephemeral landart painting entitled “World in Progress III” representing two children drawing and building their ideal world, at the Headquarters of the United Nations (U.N.) in Nairobi, Kenya, Friday, February 25, 2022. The artwork covering 7200 square meters was produced with biodegradable paint made from natural pigments such as charcoal and chalk and constitutes the third and last step of a project started at the U.N. European headquarters in Geneva in 2020, followed by the second step at the NYC U.N. headquarters. (Photo by Valentin Flauraud/AP Photo) 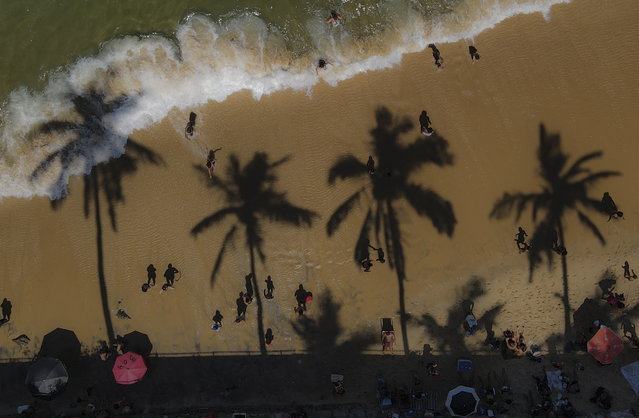 A picture taken with a done, shows people taking advantage of the hot day during the Brazilian summer at Urca beach, in Rio de Janeiro, Brazil 03 March 2022. The heat wave in the city left the temperatures close to 40 degrees celcius, 104 fahrenheit, in some parts of the city of Rio de Janeiro. (Photo by Antonio Lacerda/EPA/EFE) 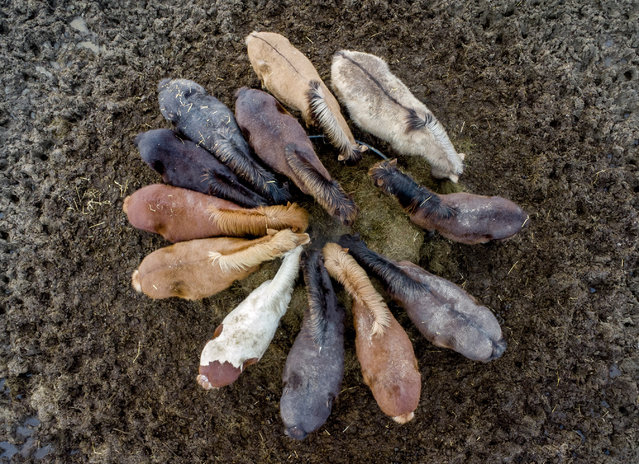