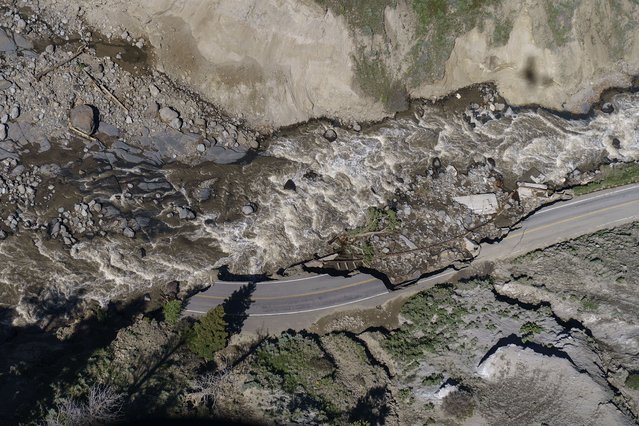 Receding floodwaters flow past sections of North Entrance Road washed away at Yellowstone National Park in Gardiner, Mont., Thursday, June 16, 2022. Yellowstone officials are hopeful that next week they can reopen the southern half of the park, which includes Old Faithful geyser. Park officials say the northern half of the park, however, is likely to remain closed all summer, a devastating blow to the local economies that rely on tourism. (Photo by David Goldman/AP Photo) 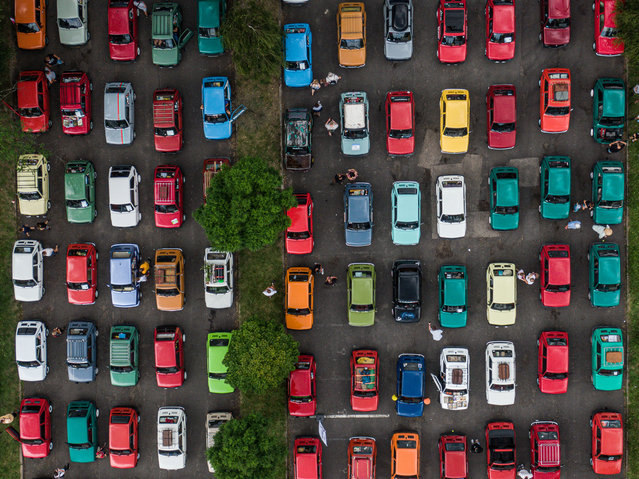 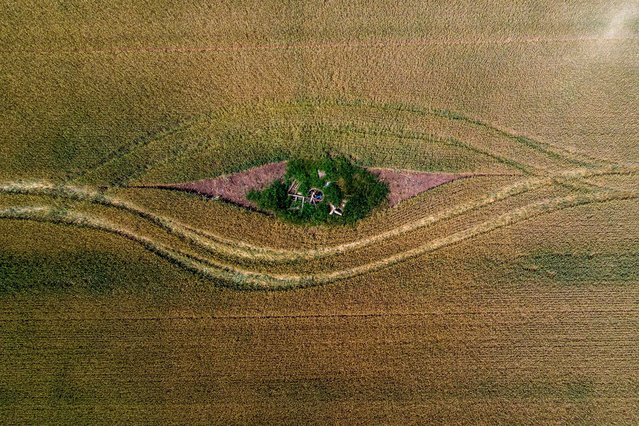 An aerial photo taken with a drone shows traces of the wheel of an agricultural vehicle on a grain field near Hajduszoboszlo, Hungary, 08 June 2022. (Photo by Zsolt Czegledi/EPA/EFE) 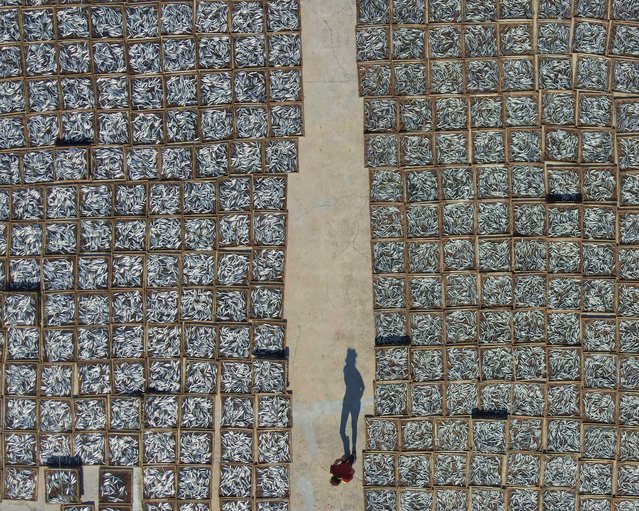 An aerial view shows a worker standing among dry fishes at a factory in Penghu islands on May 31, 2022. (Photo by Sam Yeh/AFP Photo) 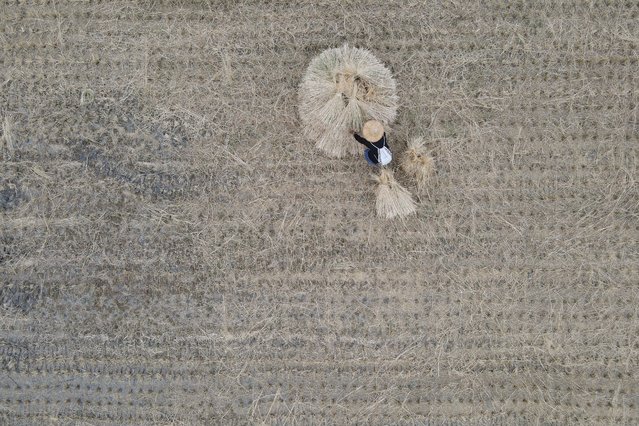 An aerial view shows a farmer sorting out straws at a rice field in Hualien County, eastern Taiwan on June 24, 2022. (Photo by Sam Yeh/AFP Photo) 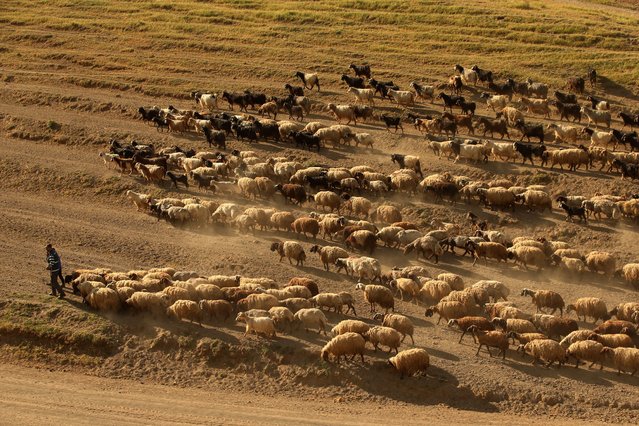 Breeders pasture their sheep and goat in the outskirts of Mount Nemrut in Tatvan of Bitlis, Turkiye on June 19, 2022. Breeders living in the Kiyiduzu Village of Tatvan feed their animals until fall with the rich grass of the plateaus they go to as the weather warms up. Breeders bring their animals to the plateaus with herbous vegetation as the dawn comes, later take them back to their villages to meet the water needs of the herds theyâve pastured throughout the day and to milk them. As the herds walk on the valley above the village, the cloud of dust they create during their journey meets the sunset which creates a beautiful image for the photography enthusiasts. (Photo by Sener Toktas/Anadolu Agency via Getty Images) 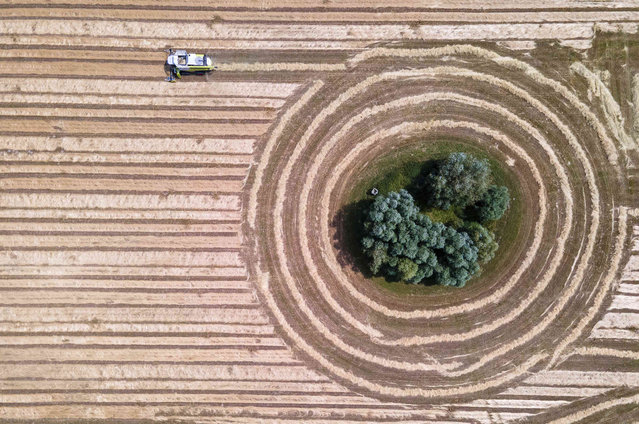 A combine harvester drives over a field of cut grass and threshes lawn seeds from the dried plants in Hanshagen, Germany, Thursday, June 30, 2022. In Mecklenburg-Western Pomerania, the harvest has started earlier than usual due to the heat. (Photo by Jens Büttner/dpa via AP Photo) 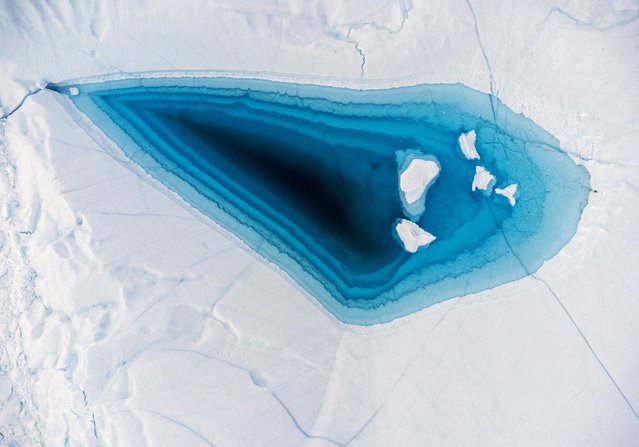 Turquoise water is seen in a large melt hole on the top of an iceberg in the Disko bay, Ilulissat, western Greenland, on June 29, 2022. The icebergs originates from Jakobshavn glacier (Sermeq Kujalleq), the most productive glacier in the Northern Hemisphere. The massive icebergs that detach from the glacier float for years in the waters in front of the fjord before being carried south by ocean currents. (Photo by Odd Andersen/AFP Photo) 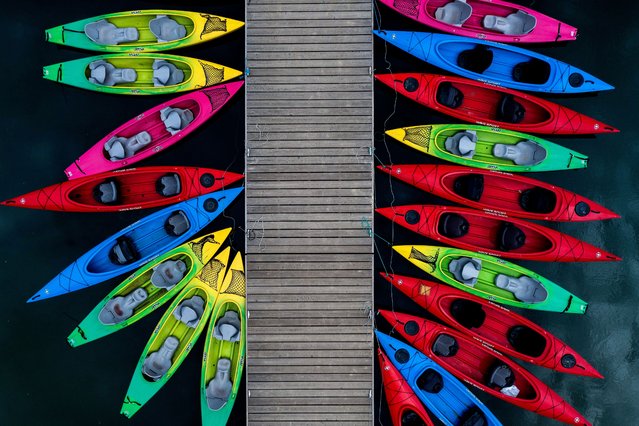 A picture taken with a drone shows kayaks moored at Lake Solina in Polanczyk, Poland, 09 June 2022. The village is a popular tou​rist destination. (Photo by Darek Delmanowicz/EPA/EFE) 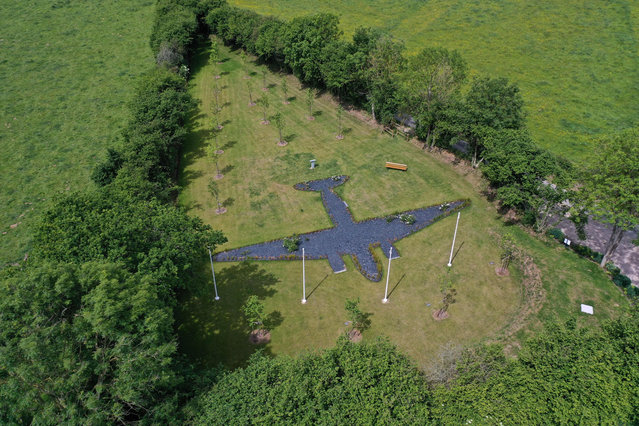 This aerial view taken on May 30, 2022 shows a US memorial garden shaped as a military transport aircraft Douglas C-47A with 20 trees in Picauville, close to Sainte-Mere-Eglise, north-western France. This garden honours the 20 American servicemen who died in this field on early June 6, 1944 during the D-Day allied invasion of Normandy that began the liberation of France during World War II. (Photo by Damien Meyer/AFP Photo) 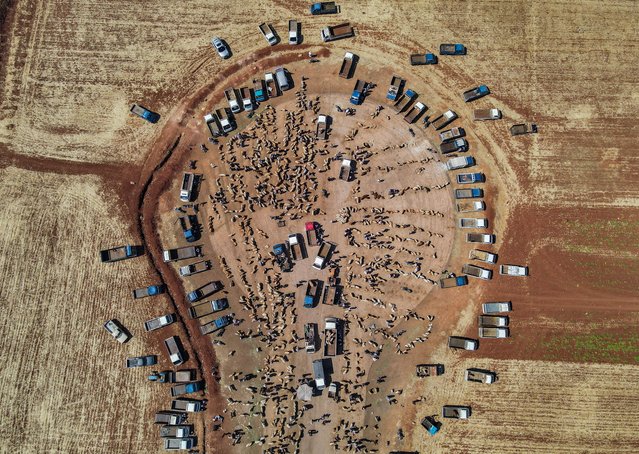 This picture taken on July 1, 2022 shows an aerial view of an impromptu livestock market near the town of Maaret Misrin in the rebel-held northern part of Syria's northwestern Idlib province, as Muslims prepare for the Eid al-Adha festival and holiday amidst soaring global prices. Known as the “big” festival, Eid Al-Adha is celebrated each year by Muslims sacrificing various animals according to religious traditions, including cows, camels, goats and sheep. (Photo by Abdulaziz Ketaz/AFP Photo) 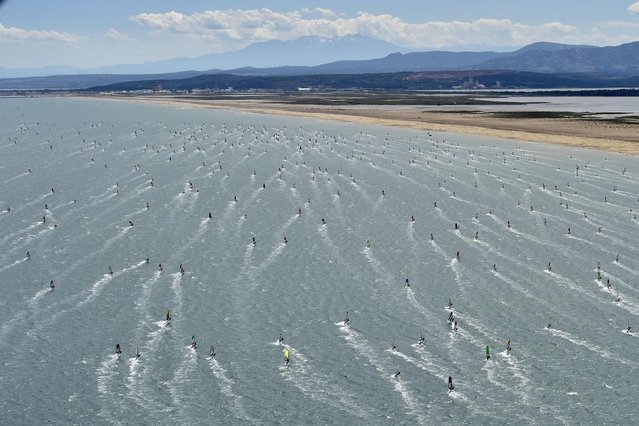 Athletes compete on the third day of the 20th edition of the Defi Wind windsurfing competition in the Mediterranean Sea, off the coat of Gruissan in southern France, on May 28, 2022. Some 1200 windsurfers are taking part in the event. (Photo by Raymond Roig/AFP Photo) 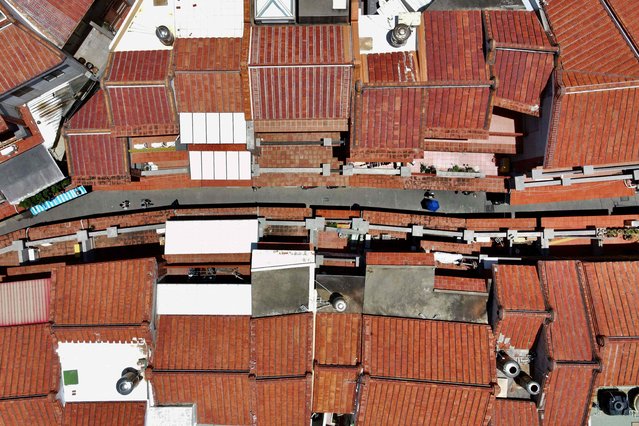 This aerial photo taken on May 30, 2022 shows people walking down a narrow lane in a local area in the town of Magong on the Penghu islands. In the sleepy fishing towns on the Penghu islands, many locals are sanguine despite the frequent – and noisy – reminders of the military threat by neighbouring China. (Photo by Sam Yeh/AFP Photo) 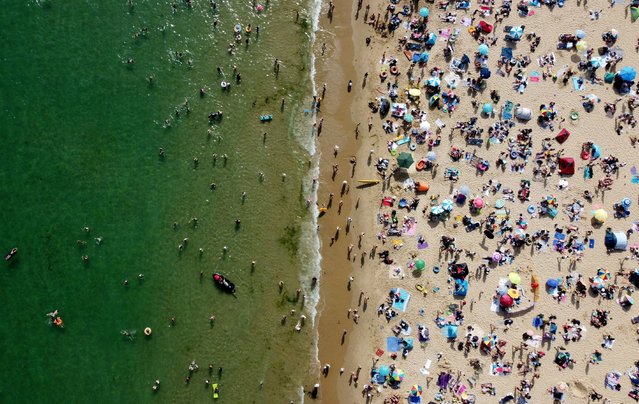 People and children enjoy the hot weather at Bournemouth Beach, as a heatwave reaches the country, in Bournemouth, Britain, June 17, 2022. (Photo by Hannah McKay/Reuters) 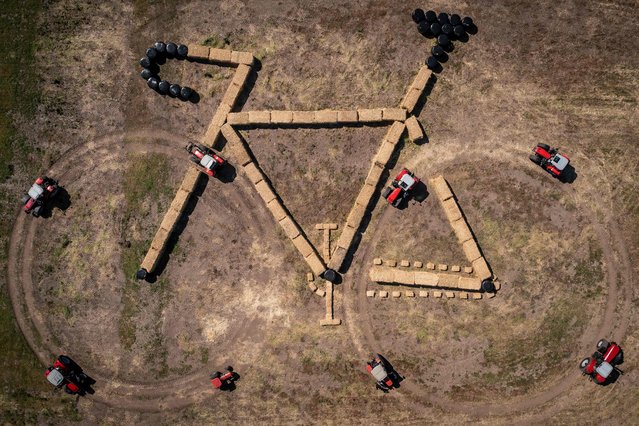 Aerial view taken with a drone on June 23, 2022 shows tractors and strawballs forming a bike-shaped land art sculpture along the route of the 3rd stage of the Tour de France cycling race, in Jutland, Denmark. The first three stages of the 2022 Tour de France will take place in Denmark before the race moves to France. The competition is scheduled to start on July 1, 2022 in Copenhagen. (Photo by Mads Claus Rasmussen/Ritzau Scanpix/AFP Photo)
Edit Del
21 Jul 2022 05:16:00, post received 0 comments
Publication archive:
←   →
Popular tags:
All tags
Last searches: